The Quest for Fire, part 1: admitting you have a problem 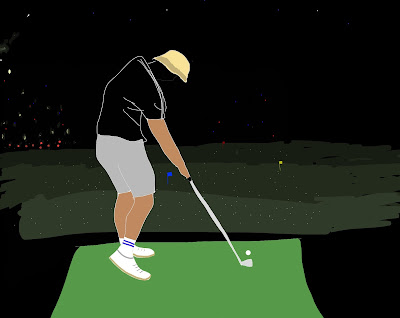 I can avoid this subject no longer. The warm season is just about here, crowds are swelling and there is little of interest going on on the course. From my POV at least. So settle in and I'll finally attempt to tell the story of a golf swing odyssey I set out on last summer.


IT was a typical warm muggy late June night when Ms. L and I went up to Randall's Island to pound away at some range balls. In the weeks prior I had reason to feel somewhat peachy about my game. I had recently challenged myself to break 80 on Staten Island once and for all and fulfilled it after not too many tries. Then I strung together back-to-back 77's not long after. During this spell I even managed to break 40 on some weird-ass hillside 9-holer in New Jersey that I'd never seen before. On the surface of things I appeared to be on a steady course towards single-digit handicap respectability.

At the time I believed my swing was in decent condition. Not great, just alright. Thought I had it under control though. Hitting balls into that dark Manhattan sky I felt satisfied enough with their direction and distance. At that time I was working on keeping the backswing compact--same stupid thing I'd labored in vain over since the very beginning. As is customary Ms. L stood behind and took a couple of casual videos of me hitting a 7-iron.

Later on I reviewed the videos. What I saw disappointed me. That is, more than usual. The ball might've flown alright but the swing itself did not look any better, or even much different than it ever had. Damn it. Whatever swing improvements I thought I had been working on were nowhere to be seen. Backswing looked as long, loose and amateurish as ever. Freezing the video at impact, though my eye was as-yet quite ignorant about swing mechanics, I could plainly see that practically nothing--hands, arms, shaft--was close to where it had been at address, to put it politely. I was a freakin mess, to put it straight.

One of the most glaring problems involved the club's shaft--the steepness of it at impact. Which meant hands coming through a lot higher than they were at address. Wrist angles thrown out the window. My waist bend was straightening out and the upper torso collapsing, probably to accommodate all that steepening action. Some basic research revealed that I suffered from a condition known as early extension, which by some counts affects around two-thirds of all crappy golfers. That's what I am, let's face it, a crappy golfer. In the society of golf I am a plebeian at best. A hacker quite frankly, a person whose efforts to strike a golf ball resemble a terrified-of-snakes type of hacking motion as much as they do any kind of athletic, efficient sports move.

Maybe it was the goofy bucket hat made me perceive things as worse than they were. Whatever it was I really could not stand the look of these videos. It made me crazy. Do I really want to go on living life as that kind of person? A casting, early-extending, shaft-steepening, bad posture-having amateur golfer person? Actually in golf, it seems weird to refer to people like me as amateurs. Bobby Jones was an amateur. Elite college players who compete in USGA championships are amateurs. Our kind deserves a different designation. We are rank amateurs, or something.

Where was I? This swing situation was now intolerable. For whatever reason, at that moment I went over the edge. I couldn't live like this anymore, swinging the golf club like this. Time once and for all to improve or detonate the whole damn game trying. At this point I'm not even sure what I need to do. But it's something I will need to figure out. Quickly.
Posted by Legitimate Golf at 7:09 PM