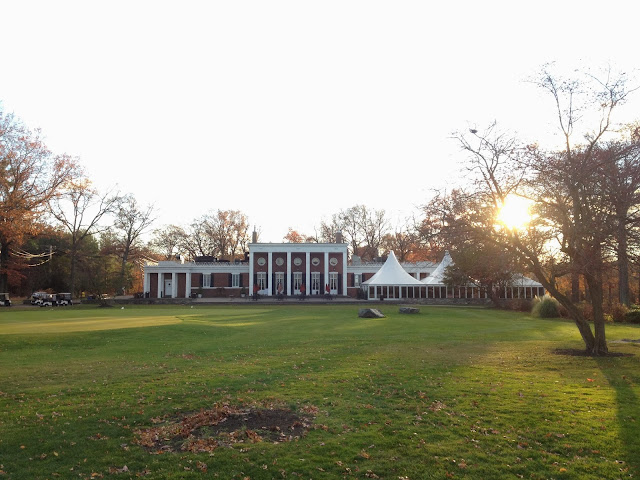 Located way, way up in the northeast Bronx, Pelham Bay is perhaps the most remote, far-flung course within the New York City golf matrix. 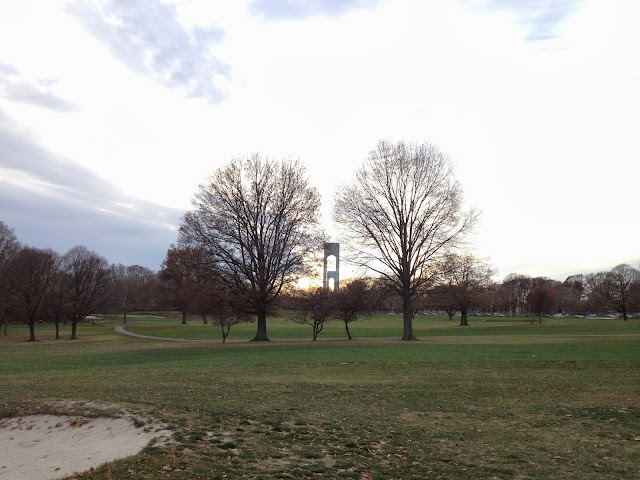 It was seasonably cold over the weekend. The plan was to arrive two and half hours before sunset, and hopefully blast my way through a super-fast, super-twilight 18. On a day like this, who could be teeing off at that time?

I badly miscalculated the situation though and ended up making a mess of the whole mission.

Insane Tee-Time Deals From Around The World

The theme of this week is bargains.

I'm sort of a latecomer to the world of online tee times--for most of my golf life, I'd just buy the yearly "early twilight" discount card offered by our local courses; that was pretty much the extent of my tee-time bargain-hunting.

But as of this year that discount card no longer exists. Who could really miss it though? As I found out before long, there is a whole wide world of even better deals to be had on the internet. 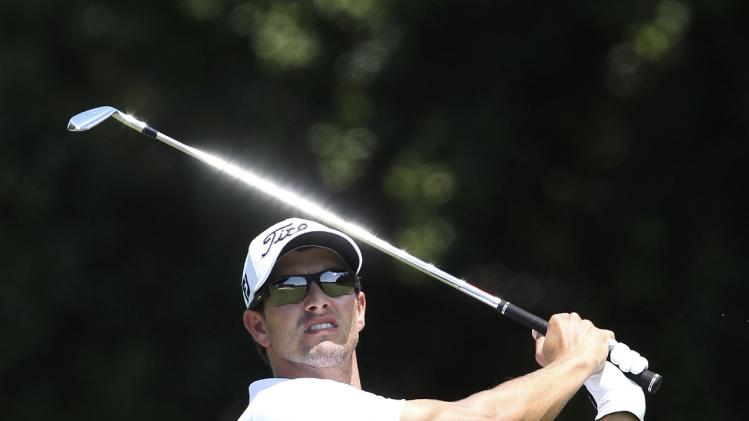 On Sunday, Adam Scott won the Australian Masters for a second win in two weeks. What caught my attention is that in carving out these two wins, he used a pretty old set of irons--the Titleist 680 model from circa 2003. A longtime Titleist guy, he was known to have played the clubs as far back as 2006, likely even earlier.


This is interesting news from a pure golf perspective, which might help explain why such a story would be completely passed over by the so-called golf press. Why bother with trivial fluff such as how an elite player is playing the best golf of a celebrated career using some old bargain bin specials. There are lists to be made, ranking the most beautiful women marginally involved with golf and so on.

And probably they generally don't want to report stories like this because manufacturers don't want them to. OEM's after all are all about getting people to look ahead to the latest models, not backwards at the old ones. 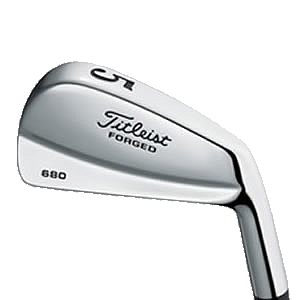 When they were released, the 680 irons represented the brand's most old-school muscleback design at the time. They are traditionally spec'd, compact, thin-topline blades with minimal offset, similar to the fabled Titleist 681s which were used to capture the "Tiger Slam" of 2000-2001, which adds an interesting wrinkle to the theory that Adam Scott is basically trying to reincarnate Tiger Woods 2.0: same swing, same coach, same caddy, and now, same kind of Titleist irons.

It's not exactly a radical change for Adam Scott when he looks down at the ball. He's been playing some sort of Titleist muscleback iron probably since way before anyone knew who Adam Scott was. But it is interesting that right now, playing the best golf of his life, for whatever odd reason he just felt like saying F IT--these old-ass clubs happen to feel real good at the moment, so I'm gonna stick with them, and I'm Adam Scott dammit.

Whatever the case, good for Adam Scott--this retrograde club change is probably an indication that he has now attained "do whatever I want" status. Now Adam Scott calls the shots. Adam Scott tells Titleist what goes in his golf bag, not the other way around. Good to see an elite player no longer bound to the exhausting, repeating cycle of product placement and promotion and any time a golfer of any level can free himself from the golf-industrial complex, hey--why not?

Eight years in the golf gear universe is a really long time. Consider how much club designs have evolved and transmogrified since then--drivers and woods in particular. Eight years ago the idea of making all driver and fairway wood heads bright white would be filed under crazy talk. "Rocketballz" wasn't even a glimmer in a TaylorMade marketing exec's eye. The whole square driver fad had not even come and gone yet. 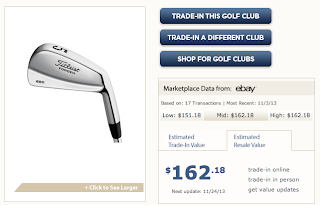 But Adam Scott's 680's remind us that iron technology seems to be moving at a slow pace, if moving at all. And that is something we should all embrace. The design of many everyday objects, the basic claw hammer for example, seems to have been more or less perfected in our lifetime. If golf irons are also about as good as they will ever be, then great--one less thing to worry about.

I've been a supporter of the traditional muscleback iron since I started playing them a few years ago. Okay, so the long irons might not be for everyone, and my own'll probably be replaced with cavity-backs eventually, but I really believe that most people who take this thing seriously would probably benefit overall from playing blades in their middle and short irons at least.

Which is not to categorically poo-poo modern clubs; playing miniscule, pre-war era, no-offset blade irons is not good for anyone's game. (We've all encountered the weirdo out there who insists on shanking it around using irons that are older than he is.) There is probably a point after which being too traditional becomes self-defeating. With the exception of maybe putters, you are probably not going to help your game using any equipment that pre-dates the computer. 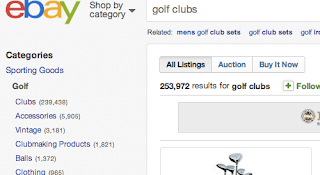 But still, that leaves us with an immense wealth of great, older golf clubs that, like Adam Scott's 680s, perhaps still merit some attention and maybe even outperform their newer, shrink-wrapped counterparts. And what's even better, a lot of these old clubs come with free shipping.
Posted by Legitimate Golf at 7:39 PM 2 comments:


If you are a golfer who happens to live in a semi-temperate climate, where courses stay open through winter, and your temperatures hover around the freezing point of water, you should consider yourself lucky once November rolls around.

Apologies to those of you in year-round temperate zones, you Californians and Floridians and the like, but in golf terms you are not as lucky as you think. With no offseason, you get no break from the epidemic of slow play or the mind-numbing douchebaggery of the super-casual set. In a lot of warm places the "offseason" is arguably among the worst times to play golf, with "Canadians" and other weirdos migrating in from the upper latitudes, clogging up courses and inflating greens fees.

Also let's face it, living in a winter-less climate dulls the senses. One of the great joys of life on Earth is experiencing that first flush of spring after a long dark winter, getting back on the course and feeling in one's bones the redemptive power of the sun awakening you and every other living organism around. Another of life's unlikely pleasures is that of coming back inside to a hot beverage, after a few hours of chasing pars in the cold. It is these such contrasts that remind you that you are alive, right?

Email ThisBlogThis!Share to TwitterShare to FacebookShare to Pinterest
Labels: gore-tex, how to play golf in nyc, layering, winter golf 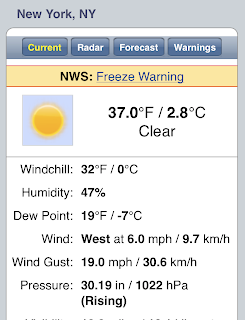 Winter doesn't officially start for another five weeks, but we got a preview of it today. Early in the AM hours there was even some light snow, which tapered off into light rain, which dried up before noon.

I was pretty sure the course would be open for the afternoon, but before leaving home I called ahead, just in case. I asked if anybody was out there. Three people, the guy said. All day? All day. I said that I would see him soon. 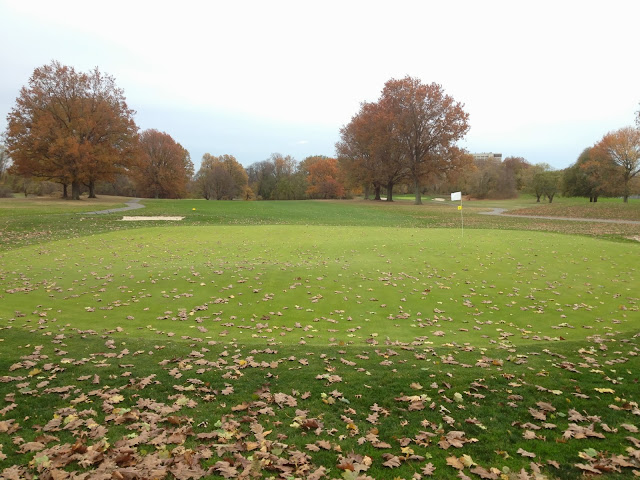 After a quick express bus ride, I got there just before two o'clock. A few people were teeing off on #1, so I got to start over on the back nine, which was totally deserted. The first swing of the afternoon felt good. A little constricted, but solid. The second felt good, and the third and fourth did too.

I won't lie, it was brutally cold out there. You're-crazy-for-playing-type weather. I had to jog the first couple of holes to get warm. The gusts were enough to stop you in your tracks--bitter, wincing blasts. Near the third green a sudden and rude gust knocked my bag over while I was trying to chip; I let out a primal yell. No one heard it though, I was the only human on that whole back nine.

You don't have to worry about me though, I was fully prepped for the cold. I had all my layering systems operating and was plenty warm. But there were times when even though I felt okay inside my layers, the cold and the wind just made the playing of golf really hard. Well-struck balls got swatted out of the air by gusts, or else shot through greens on tailwinds. I three-putted the fourth hole trying to putt into a stiff headwind that blinded my eyes with tears.

My swing felt good though, and balls were being struck solid, and this gave me the spirit to keep grinding. I hit the first green in regulation, then the second, then just missed the third. The slight bit of bulk from winter clothes actually helped me to swing by making it easier to restrict the backswing, which is something I'm always trying to do. 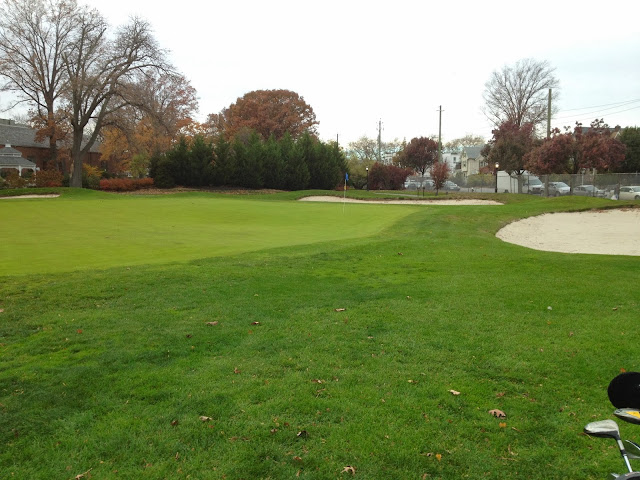 Here's the 18th hole at Dyker Beach, my ninth hole of the day. From this spot, I chipped in for birdie.

It's a tough chip, about 20 yards, downhill then uphill with a couple feet of left-to-right, so I was really psyched about it. Still am, a little. A perfect shot just about. 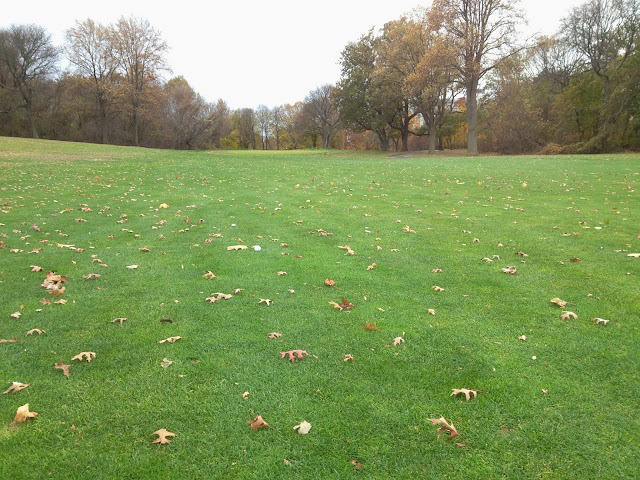 Amazing. Somehow the fairways here are still a deep shade of green, and more lush and grassy than I've seen all year. Greens are nice too. The only real downside right now are the billions of leaves covering the ground. 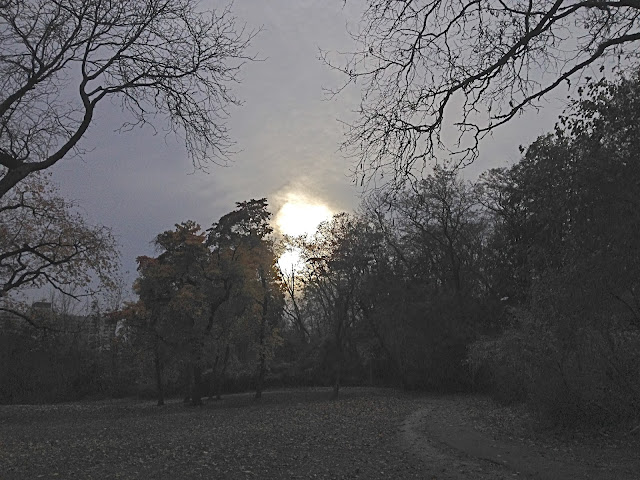 From tee-off, I only had two hours and forty minutes until sunset. But because I didn't wait on a single shot I was able to finish in a ridiculous 2:14. Afterwards I just caught the express bus back home, and made it through the front door just a hair over four hours from when I left it, which has to be a record.

I shot an 84. Looking back I lost several strokes on the greens, but besides the score it was one of my best all-around efforts of the year. No penalties, no lost balls, no winter rules shenanigans. I was so into it, and the game felt unforced, more free flowing than it has in a long time. I did a good job of wrangling the ball around in some difficult conditions--it would've been easy to lose some today. The joy of playing on an empty course, that's still flush with greenery, I can't say enough about it. It's so great that after a little while, the cold doesn't even really matter.

As of now I might be more excited about my next round than I have been all year.
Posted by Legitimate Golf at 10:24 PM 5 comments: In the last post, I pretty much welcomed in the winter golf season. Early in the week, the temps sunk to around 40 degrees (F) so eagerly I took to Dyker Beach GC hoping to get in a fast one.

To my satisfaction the temperatures kept most people off the course, but when I got there I was surprised to see a still-very lush environment, still in the flush of fall--guess I was a little premature with that last post. So, I thought I'd put up some photos for those who might enjoy a bit of fall foliage.

Read more »
Posted by Legitimate Golf at 9:31 AM 6 comments: 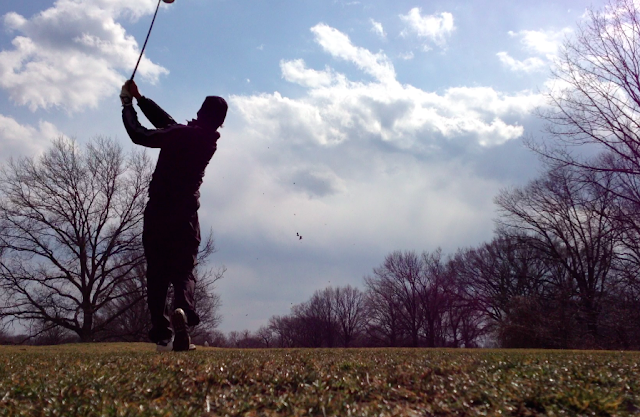 For most of us, the golf season is winding down. The auspices, mounting for weeks, can no longer be ignored, even by the most optimistic among us.

Read more »
Posted by Legitimate Golf at 7:41 AM 5 comments: