Insane Tee-Time Deals From Around The World

The theme of this week is bargains.

I'm sort of a latecomer to the world of online tee times--for most of my golf life, I'd just buy the yearly "early twilight" discount card offered by our local courses; that was pretty much the extent of my tee-time bargain-hunting.

But as of this year that discount card no longer exists. Who could really miss it though? As I found out before long, there is a whole wide world of even better deals to be had on the internet.


So this is the year I really started reaping the benefits of online tee-time bargain bonanzas. And booking online hasn't just saved me bucks--it's helped expose me to a plethora of courses I never would've seen otherwise.

This week, I thought I had broken some kind of existential barrier when I found a $21 cart-included deal at one of my favorite local joints, applied a $10 off coupon to it, and after a $1.99 service charge ended up paying just $12.99. This wasn't some super-twilight nonsense either, it was 12:30. No aeration, no temporary greens or any such cut-rate shenanigans--this was a fully operational, well-maintained proper 18-hole course with nice fairways and greens.

And considering that I had a nice round on a mostly empty course, a quick round of about two hours and twenty minutes, it turned out to be an insane value bargain. As Ms. Legitgolf remarked, paying $13 for all that is practically like getting paid to play. It's cheaper than seeing a movie. With empty tees everywhere and a couple hours left til sunset, I could've even snuck in another 9, or another express 18 if I really wanted--I didn't though, because I would've felt bad using up more than 18 holes' worth of cart gas. True story.

This deal has sparked my curiosity. New York City in general is a high mark-up town and even shitty muni rounds of golf are no bargain, not at full price. So if crazy deals can be scored around here, surely there have got to be more desolate regions, whose courses are way more desperate to attract warm bodies to their cold fairways.

I didn't even have to search that far before finding these here gems. Somewhere in New Jersey, near Atlantic City, there is a course called McCullough's Emerald Golf Links.

EZLinks.com is currently offering a variety of AM tee-times at McCullough's for this weekend, cart included, for a puny $15 plus $1.99 service fee. But wait--that's not all. With EZLinks's current $10 dollar-off discount coupon code, our bill comes to an ungodly $6.99. 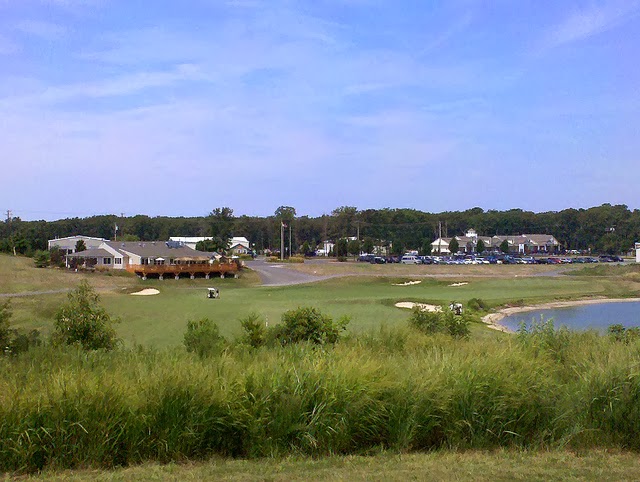 From all available accounts, McCullough's is a fine course. Lots of curb appeal at least, with a design that appears exceedingly thoughtfully designed, a loving homage to the great links courses of Scotland and Ireland; the holes are specifically modeled after the memorable ones at places like Carnoustie, Royal Portrush and so on. Certainly sounds like a place I wouldn't mind playing golf at. It's all academic at this point anyways. Even if this was a shitty course, a nine-hole course, a slapdash pitch-and-putt--seven bucks plus cart is an unthinkable bargain.

Seven bucks is so cheap I can't even wrap my mind around it. It sounds like what Bobby Jones might've paid to play a round. I have no idea about the gasoline, water, fertilizer, labor, etc. that goes into the upkeep of a golf course, but still I struggle to comprehend how $6.99 could possibly cover one person's share. If there's any profit to be made on $6.99 we have to be talking in fractions of pennies here. If I were to get in on this deal and this is just me, I would feel compelled to fix up a few more pitch marks, fill in a few more divots besides my own--you know, try and even up the karmic balance sheet a little bit.

Atlantic City is a little over two hours drive for me, but seeing bargains like this I won't lie--the thought has crossed my mind.

If anyone has heard of a better deal than this, or any other crazy deals I'd certainly like to hear about them.
Posted by Legitimate Golf at 7:10 PM