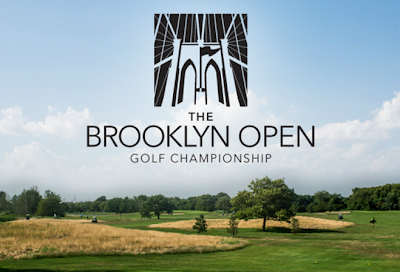 A while back I mentioned the first-ever Brooklyn Open golf tournament, to be held on October 21st. Originally it was to be a gross-score competition open only to 10 handicaps and lower.

Now, as Legitimategolfer John Furr has brought to my attention, some notable changes have been made to the tournament.
It's still a professional prize money event, only now it's also a flighted competition, meaning it's open to amateurs of all levels. There'll be four handicap divisions:

Additionally, the entry fee for amateurs has been lowered--it's now $100. (The pro fee is $175.) However lunch is still included!

Obviously this changes the whole tone of the event. Handicaps of 10 or better make up around a quarter of all golfers with handicaps (supposedly), so the event has gone from being fairly exclusive to now being wide open.

For me it is especially opportune. My plan had been to try to lower my handicap a stroke and half or so and play my way into eligibility over the next couple of weeks. It's kind of asking a lot, but that part I felt I could handle--my handicap's bloated right now anyways, so it's not like I was asking myself to play better than I ever have or anything like that.

Frankly what really freaked me out was the thought of becoming eligible, and then having to enter the tournament, with no prior tournament experience, while also being among the worst players in field. I would've gone through with it, but it would've been a really rough intro to tournament golf, I think.

With this new criteria I might actually find myself in the upper part of the amateur field, and that I will admit is rather comforting. Now I can genuinely look forward to this instead of being freaked out. It's giving me something to work towards, which'll be fun I think. I'm still going to practice hard and try to get in some low rounds before the entry deadline. Currently I'm eligible for the 2nd handicap division (9.0-13.9) but if I happen to play really well, I might find myself in the first flight. <gulp>

No sandbagging though--I'll play as well as I possibly can until the entry deadline and gladly accept whatever division I make it into. I'm planning to play this weekend and since I haven't played a "home" round in a while it'll be interesting to see where I'm at. Stay tuned.

Anyone else in the area at all interested in entering? I know the Monday date makes it a little awkward. But for $100 it's a pretty good deal, and who knows, maybe it's a chance to get in on a small bit of history, in case this tournament takes off and eventually becomes something big.
Posted by Legitimate Golf at 8:28 AM

New comments are not allowed.