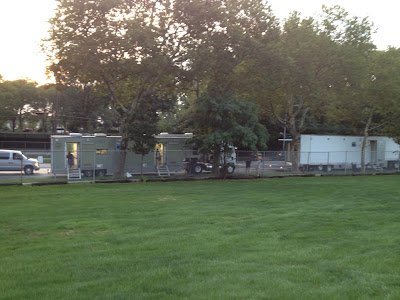 The ninth hole of my local course is bounded all along the left side by a chainlink fence that separates the course from the adjacent avenue and sidewalk. The overwhelming majority of people here miss their shots to the right, but still, it doesn't take that bad of a leftward shot to clear the short fence. When it does happen, it is painfully obvious that your ball's not only out of play--it's clean off the property. It's completely abandoned the domain of anything golf-related. In other words it is, beyond all doubt, out of bounds.


What happens here more often than not though, after someone yanks one out into the street, they go up and drop a ball near the fence and play from there.

Yet on a different hole (one that's deep in the heart of the property), there's a big red-staked hazard all along the right side. Pretty easy to slice one in there, and I see people do it all the time and then immediately reach for another ball to hit.

Helpful guy that I am I usually let them know about the hazard, and that they can take a drop and play their third shot from where it went in, instead of from all the way back on the tee.

The point is, even in this wonderful information age of ours there is still a hell of a lot of confusion about how to proceed when losing one's ball. The good news though, is that the rules provide us with clear instructions on exactly what to do in the situation. If we're diligent about following them, we can save much time and stress and maybe even escape with dignity intact.

This isn't a guide to losing balls in a hazard. No, a ball in a staked hazard isn't actually lost from a rules point of view, because you get to play from where it disappeared, even if you can't find it. For specific info on how/where to drop your ball see rule 26. 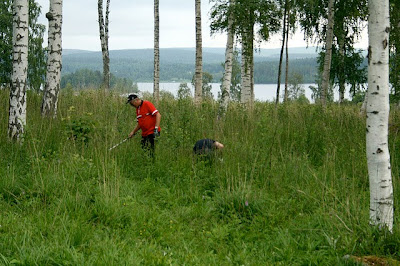 When you hit a ball out of bounds, it's considered lost. When you hit a ball in bounds but can't find it, it's considered lost (unless you are virtually certain that someone or something messed around with it--see rule 18). And when your ball is lost, the only recourse within the rules is to add a penalty stroke to your score and then replay the shot from the same spot.

If we are going to play the game the right way, there is no point in disputing such a basic foundational rule, and the only thing to do is accept the situation and quickly move forward.

Now it'd be highly impractical to have to hit the ball, go search for it and determine it's lost before having to go all the way back to the original spot to replay it. If only there were some, I don't know, provision in the rules that allowed you to play another shot, for insurance.

If a ball may be lost outside a water hazard or may be out of bounds, to save time the player may play another ball provisionally in accordance with Rule 27-1. The player must inform his opponent in match play or his marker or a fellow-competitor in stroke play that he intends to play a provisional ball, and he must play it before he or his partner goes forward to search for the original ball.

Note the wording of the first line--If a ball may be lost... That means that anytime you hit a shot, and you can't see where it ended up, and it was headed anywhere near the direction of out of bounds, bushes, woods, or any other non-hazard location where there's even a small chance of getting lost, even if it's just some really thick rough, then damnit, there's only one option and that's to hit a provisional.

You see, certain rules actually exist to you know, help a player out and this happens to be one of them. 27-2 is a rule that actually permits one to hope for the best while planning for the worst. It offers a convenient way of circumventing a potentially awkward, time-consuming situation. 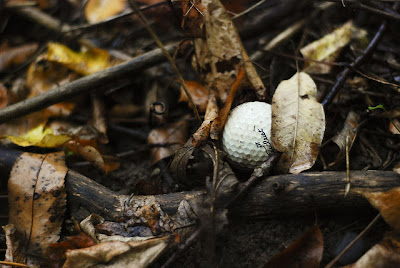 Nevertheless, improper OB/lost ball procedure ends up being one of the worst common rules errors in recreational golf. On a typical public course you're more likely to see someone taking a drop near an out of bounds area than someone hitting a provisional from the tee box.

The rules applying to this situation could not be plainer, yet we're still having a hard time doing the right thing. Let's examine why.

-Basic misunderstanding of the rules: that is, a failure to understand the difference between out of bounds/lost ball and a hazard and/or the correct procedures for either.

-Shame: especially if there are other people gathered around watching--you've just launched one sideways off the planet, of course you want to get the hell out of there.

-Denial: it's out there somewhere, you'll find it.

-Not wanting to hold up play: even though the hitting of a provisional will take up all of twenty seconds of everyone's time, you just can't bring yourself to do it. (Pace of play, that wonderful multi-purpose excuse for all kinds of rule-violating.)

-Peer pressure: you've just sent your ball into oblivion, but since no one else in your group knows about rules, everyone's already started leaving the tee without giving you a chance to re-tee. Guess you'll just drop somewhere up there, right? 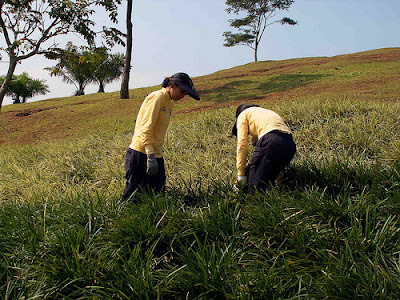 Why it's good to hit a provisional

Rule 27-2 explicitly states that the provisional ball is meant to save time. While true, the provisional is probably more important for the average golfer because it helps him to stick to the RoG and apply the correct procedure for a lost ball.

Because in most non-competition scenarios, if you lose a ball and don't hit a provisional, let's face it--you are most likely not going to return to the tee or the original spot and replay it according to rule 26. No, most likely you're going to drop a ball in the general area it was lost and play from there.

While this act might seem harmless, make no mistake it is a major rule violation and not even close to the correct procedure. Such a gross miscarriage of the basic rules can eat away at you and put a dark cloud over the rest of the round and your eventual score. Even if you were add on two penalty strokes--one for losing, another for playing from the wrong place, your score is still wildly hypothetical.

There are additional reasons for embracing the provisional, and the way I see it, the more we can learn to appreciate rule 27-2 the better off we'll be in the long run.

A search for a lost ball when you haven't hit a provisional is at best, stressful. At worst, if say it happens during competition, or even just in the middle of a really good round, it can be fraught with pulse-pounding anxiety and sinking despair.

Whereas knowing you have a provisional safely in play, you're able to carry on a search in a calm level-headed manner. If it turns out you don't find your original ball, you're more likely to accept it with dignity and focus your positive energy towards salvaging a score with the new ball.

With a provisional safely in play you are also less likely to expose yourself to physically dangerous situations in the form of harmful flora or fauna, treacherous bodies of water, precipitous terrains, etc. A quick search of some local news archives can attest that many a golfer has met misfortune while attempting to hunt down an errant ball.

Besides all that, it might help to see the provisional ball as opportunity rather than punishment. In other words think of it as a do-over, a chance to re-attempt the same shot you bungled the first time, an exercise in self-correcting your swing if you will.

Because in the best case scenario, you find your original ball and it's playable, and the provisional becomes null and void, like it never happened. Which effectively means hey--you just gave yourself a free, perfectly legal practice shot in the middle a round. When does that ever happen? 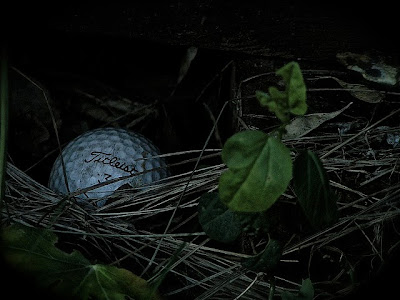 Losing balls is an essential feature of the game, no matter how good a golfer you are. It's not something to be feared, because fearful is no way to play golf. Losing a brand-new Titleist might represent an annoying loss of physical property, but it need not cause you to lose dignity, or the integrity of your score.

The next time you hit a shot that disappears and you're not sure where it ended up, remain calm. Simply let the people in your group know that you need to apply rule 26-2, and that it'll only take a few seconds. Do your best to clear your mind of the previous shot. Don't allow yourself to worry at this time about the fate of that first ball. Tee up (or drop, if you're not on a teebox) another ball, take some deep full breaths, and do your best not to screw up the shot again.

The provisional. It's your friend. It's one of the few rules designed to help you, so don't shun it. Embrace it.
Posted by Legitimate Golf at 8:22 AM