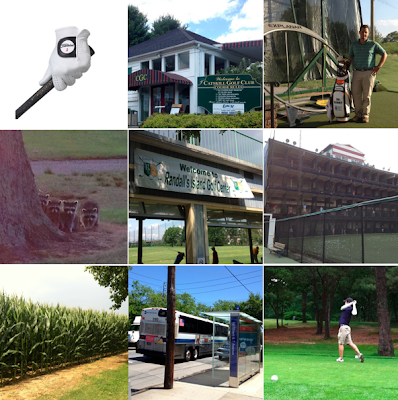 Summer officially ended and quite frankly, good. Those who know, know that fall's a better season for playing better golf anyways. Around here at least. The sweat-soaked clothes, the ruined gloves, the constant rehydrating, the slathering of greasy sunblock. And the heat for god's sake, the plain old wilting heat... See you next year, is what I say to all that. Don't get me wrong--the summer solstice is a magical time. I still say that being outside playing golf well past eight o'clock is one of life's special joys.

Not that I played much sunset golf this summer though. For this and that reason I opted out of the twilight set this year. And even though my main golf cohort escaped from New York, even though my handicap has ballooned to almost five strokes worse than it was a year ago today, I have to say it was a very good summer of golf. A memorable one, since it saw the birth of the Legitimate Golf website, and probably a greater diversity of experiences than I've ever had since taking up the game here in this golf-forsaken shacktown.

I finally figured out what the deal is with those white arm sleeves.

I also explored the history of the golf glove.

I documented my bus trip from Manhattan to the golf course.

I got to hang out and rap with Evan Silkworth, the head pro at Marine Park GC and get a little professional insight on the state of ghetto golf.

I toured Manhattan's asylums for the golf crazies, on the west side at Chelsea Piers, and the one hidden away from the general public on lonely Randall's Island.

There was plenty of golf, too. I met some baby raccoons. I got to sample some of the rustic, sun-ripened golf pleasures deep in the New Jersey countryside. Up in the Catskill Mountains, I played a marathon 36 holes all by my lonesome at a sweet little semi-private course.

And last week I finally put some solid hits together and shot a round in the 70s for the first time this year.

But now that I seem to be playing okay, I think I'll apply it to something besides trying to stoking the old ego. I'm going to take my game on the road and continue exploring the world of New York City golf, until I've been to every last dilapidated course in this dried-up town. That's right--the Legitimate Golf New York City Golf Tour will roll on into the fall and even the winter.

So come on. There's a lot to look forward to. For a lot of us, this is the real meat, the main course of the golf season. (With apologies to all of you way up north of course, and any of you Legitimate Golfers whose golf year is soon coming to a close.)

So okay, pretty soon we'll have to watch out for losing balls under piles of leaves, and before long twilight rates will be starting at 2pm (sigh)... But on the plus side, the rough'll thin out and more importantly, so will the crowds. Instead of slathering on more greasy sunblock, we can just put on some long pants and a nice sweater. What civilized person could complain about that?
Posted by Legitimate Golf at 9:33 AM