Anyone who has ever watched Asian professionals playing golf has probably seen these:
Ever wonder, What is that, an undershirt, or is it add-on sleeves? In any case who the hell wears long sleeves in hot weather, and how come they don't seem to be bothered by them? If so, you're not alone. 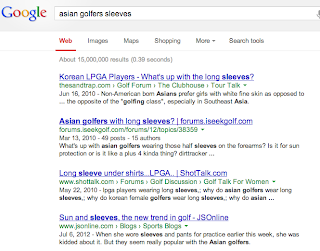 Well some people need to get with the times it seems. Apparently fabric technology has progressed to where long sleeves on a hot day can actually be a good idea.
Actually the standalone sleeve is really popular in a lot of sports these days. You see them regularly on some of the biggest names out there.
There's even a wikipedia page dedicated to the "basketball sleeve"; it credits Allen Iverson with popularizing the item among ball players. Evidently some believe the sleeve acts as an aid in shooting the basketball. Some even think that it could act as a placebo against injury or pain.

Unlike Dwight Howard though, golfers in the USA have been slow to adopt the new look. Apparently they are not sure if they want to make their shot look better too.

But leave it to the Asians, notoriously scared of the sun, to spearhead the trend. I'm not surprised, I see the sun-phobia firsthand out on my local courses. Nobody wears bigger visors, or sports bigger umbrellas, than Korean ladies playing golf.

I have no problem with the sun myself. However I've never been a fan of the sunscreen lotion, so I wondered if sleeves could really be a viable sun protection alternative, at least cut down on my consumption of the greasy goop. 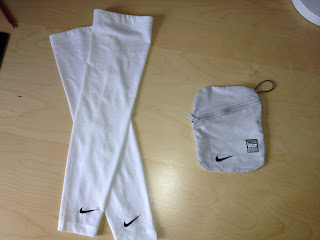 I went ahead and tracked down a pair for myself. I managed to find these "Nike Dri-Fit UV Solar Golf Arm Sleeves". Retailing for about $25, they're made of Nike's proprietary moisture-wicking fabric (really just polyester rebranded with a cooler name), blended with Lycra spandex (duh). It's a very thin, stretchy material. They come with sporty little mesh pouch for storage. Nice. 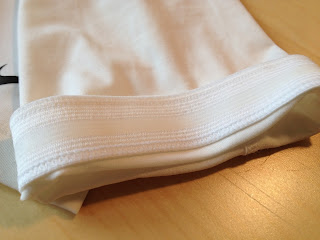 The interior of the upper cuff features a kind of grippy rubbery band, probably to keep the things from sliding off from the force of my oh-so-fast golf swings.

They felt odd when I first put them on, seeing as how they fit pretty tight (I'm probably between sizes, and went for the smaller). There is a definite compression effect for better or worse. Since I'm not really accustomed to wearing stuff quite this tight, awareness of my arms was especially heightened.

Consequently they do make the golf swing feel different. They just make your arms feel... different. It's hard to describe beyond that--sorry. Some might like the feeling. The first time I wore them out on the course, I had the worst start to a round ever. That could've been coincidence though, it was a gusty day. I know that I did struggle to feel right swinging with tight sleeves on. Unlike Dwight Howard, I wouldn't fall in love with them right away.
To their credit they do somehow impart a weird cooling effect, even in really hot temps. In extreme New York humidity though I did find them slightly discomforting, a sort of suffocating feeling that made me want to tear them off. But that's humid heat for you, uncomfortable anyway you look at it. Still I'd say the sleeves are probably very well suited to dry heat conditions, where moisture can evaporate, bringing on the coolness.

I brought them along once on a cool day thinking they might offer a bit of insulation for when it got chilly later in the afternoon. Wrong! I might've appeared warmer to anyone who saw me wearing them but their cooling effect holds up in cool weather too, rendering them ineffective as an outer layer solution.

I've tried em out on several outings, and I'm now starting to get used to the feeling. Each time out less aware of the sausage casings on my arms. I kind of like the way they look. Definitely help you channel your inner Deion Sanders. Maybe I'll start wearing them around town.

Ok, so they're not the magic-wear that I admit I'd wished they'd be. They don't feel invisible, like I had hoped. The compression effect, I'm still on the fence about. I guess for me nothing can really top the feeling of bared arms swinging free in the open air. But hey, these sleeves do offer some good sun protection along with you know, some rakish style, if you're into that. If you're tired of your same old same old golf gear and looking for something to shake it up, then why not, give these a try, you could do worse.

Considering their popularity among the sports elite, as well as the whole other half of the golf globe, it's only a matter of time before we're all wearing them. Might as well get in the vanguard and lead the way for you and your dweeby friends.
Posted by Legitimate Golf at 3:54 PM