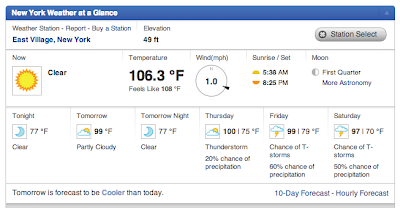 We're in the middle of a long heat wave. After a few days of eyeing the triple digit temps on the weather reports and seeing the numerous "heat advisories" and "air quality alerts" I got a little discouraged. But at some point you just have to get out there and have a go, so I dragged myself onto the express bus and out to the local shithole.

I got to the first tee and was devastated when the starter put me into a foursome. Usually when you brave extreme weather conditions you hope to be rewarded with an empty course. Not today. Actually the heat didn't hit me too bad. I remembered that I actually like hot weather. It's the humid sweating, the damp clothes, soaked gloves, the need to constantly gulp fluids--that's the real hassle. Other than that heat can be great. Loose muscles and joints, plus the ball flies farther--if you can just manage to stay upright, there's a lot to be said for this hot weather golf.

During the pre-round introductions one of the guys noticed that I had no cart or pull cart, and that I was about to try and walk and carry my bag. "You're crazy to do that in this weather." Then again he was an enormous blob of a guy, 300 pounds easy. What I really wanted to say was something about how if I looked like him then yeah, it wouldn't be smart to walk. It was a little early to be hating so I just brushed it off. "Ah, it's not so bad."

Filling out the foursome was a pair of younger guys. One wearing a Hunter Mahan replica cap and the other a Phil Mickelson "KPMG Consulting" version. Now I was not even aware a) that one could purchase such a hat or 2) that Phil Mickelson fandom actually reached such a level.

Because corporate logos are only worn by professionals because they get paid to do that, right? Sporting "KPMG" certainly isn't helping anyone get laid. Nobody would actually pay actual money to be a walking advertisement for some stuffed-shirt consulting corporation right? 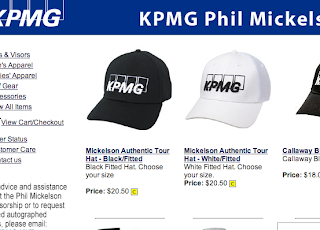 Wrong. Once again I'm the one who needs to learn how the world works these days.


It was a typical NYC round, typically painful. As is customary around here the two replica hat guys shared a cart and made their way around the course as if attached at the hip, so enthralled with each other's game that they couldn't bring themselves to play ready golf. Phil Mickelson hat had some blowup holes and held up the whole group several times--the poor slob was too overweight to hustle. 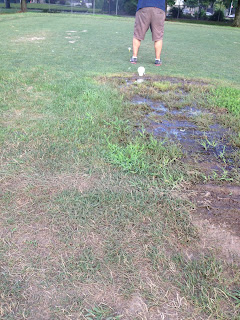 Speaking of dumb behavior, this is worth mentioning since it's pretty common--teeing up in front of the tee markers. To me that says a lot. The average hole on an average-sized golf course is about 350 yards long. That's 12,600 inches. Think about that. Cheating just to make the hole two hundredths of one percent shorter.

Enormous blob was a real piece of work too. After almost every tee shot he would forget all about everyone else, drive up to his ball and just sit there in his cart staring toward the green, completely in the way of someone's shot, until one of us would yell "HEADS UP" at him. I don't think he was all there mentally, because he kept doing it, as late into the round as the 16th hole. Another stupid thing I noticed about enormous blob was that, in 18 holes, he didn't pick up a single flagstick. I later found out that this guy is a high school teacher. Sad. 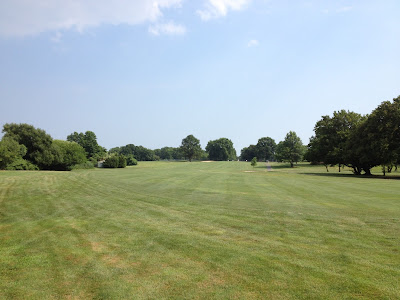 It was hot, it was miserable. I swung it like crap, burned a bunch of edges in shooting 84. I couldn't muster any goodwill for these shlubs at all. I hardly spoke to anyone. Hunter Mahan hat was an okay guy though, and also golfed his ball pretty respectably. So after everyone putted out on 18, I went over to him, extended a hand, addressed him by name and said, "It was good playing with you." Then I turned to the other two guys, shook their hands and said, "Take care." 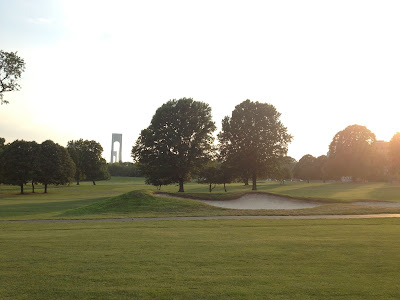 Instead of going home, I saw the 10th hole open and made a snap decision to re-play the back nine. I was feeling pretty fresh still. I had just about a 1/4 of a water bottle left, but I could ration it out. I ran into a lonely Chinese kid on the 12th and asked if I could join up. He agreed, but after a hole and a half I realized that his way of standing frozen over the ball would probably prevent us finishing on 18, so I ditched the dead-weight and played some solitary speed golf coming in.

Ahhh freedom. The first 18 was a long, tedious round but getting to play this extra nine makes it all worthwhile. It's those late-day moments on an quiet, empty course that to me really represent the height of golf. The slogging through of 5 hour rounds with dull strangers, that's kind of the compulsory duty, the dues you pay for a chance at moments like these. 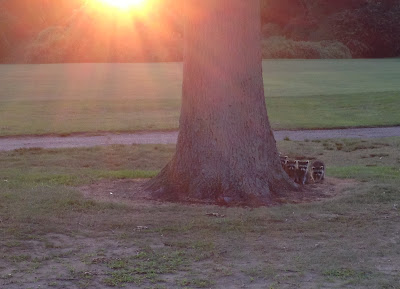 Ahhh! A gang of raccoon puppies. They were all nervous and curious trying to watch me. Probably the cutest thing I've ever seen on a course. Over that last nine, I managed to play some real golf.

Plus I managed to walk 27 holes while carrying the bag in 100 degree heat, and did so without feeling like complete hell at the end, so all in all, a good outing. I figured out a couple things, one of which was to remove the glove immediately after the shot, and then sort of flip it inside out, give it a chance to air out a little. It helped immensely. So now I'm actually looking forward to playing again in this heat.
Posted by Legitimate Golf at 3:14 PM