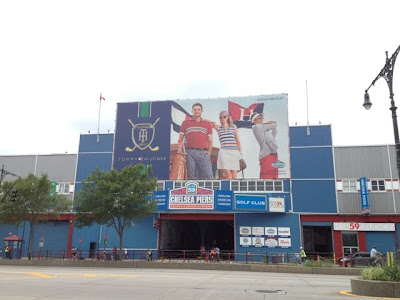 Practice. We all need it, in some form. This week's Ghetto Golf takes a look at Manhattan's one and only open-air golf facility, the Golf Club at Chelsea Piers.

The multi-tiered urban driving range is nothing novel. It's the norm in Asia. 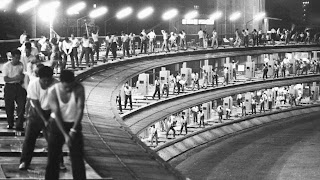 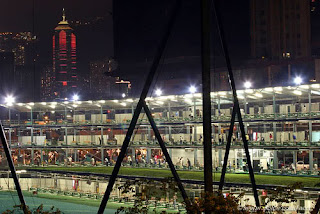 For a lot of people there, the range is their predominant experience of the game. Some of the ranges in Korea are serious intensive training facilities that turn youths into golf professionals.

Our range is nothing like that--much more casual here. Mostly regular hackers trying to keep their lousy swings functioning. You won't see a lot of serious players; you will see a lot of tourists and non-golfers having a go, lured in by the novelty of a driving range in the city (it can get quite loud with all the shanking of balls into the vinyl partitions). And there is an actual instruction academy on the third floor which features an indoor bunker and putting studio, if you're really in a bad way.

Since it's Manhattan's only outdoor golf facility, probably anyone who's anyone in golf has stopped by at some point for some promotional headache or another. 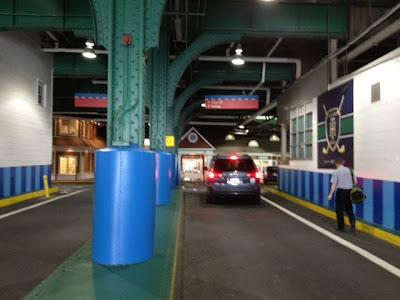 Ok, let's get it on already. The main entrance is through the parking garage. 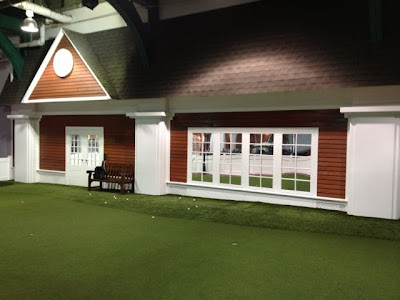 Before heading in to the golf club proper let's check out this sad little chipping/putting area. There's nothing real about this here facade--we are still in the parking garage. Those are windows and doors to nowhere. It's like when the aliens attempted to re-create a human environment for Dave Bowman at the end of 2001: A Space Odyssey: 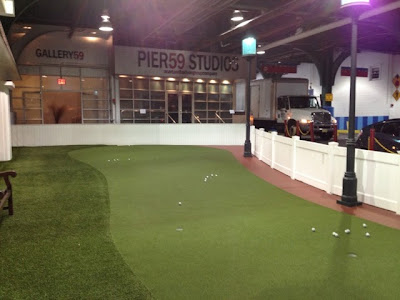 Because its all artificial turf, this green features some weird breaks that aren't visible to the naked eye. Really a terrible place to practice, just barely more real than those fake windows and doors. 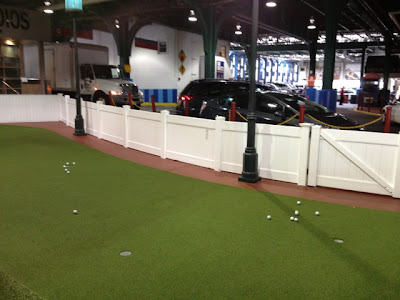 Spend any time here and you might start to feel like a zoo animal. Lots of foot traffic going in and out of the Piers complex equals a lot of curious rubbernecking. I guess it is surprising to see people chipping and putting in a Manhattan parking garage. 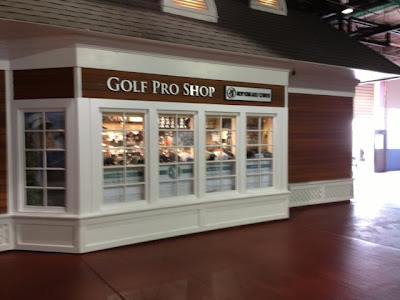 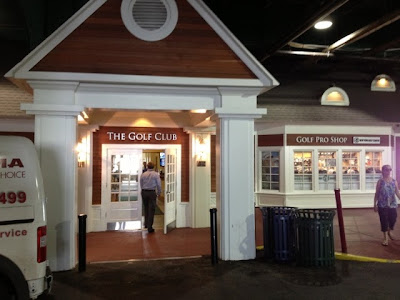 The "pro shop" and front door to the "club". More fake shenanigans, but at least this is an actual building. As with the aliens in Space Odyssey, all these appearances are a nice thought even though they are hopelessly fake-looking. Hey, they tried at least. 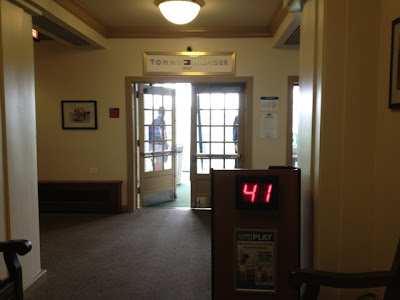 It can get crazy busy in here--I've seen hour long wait times. Today though, no need to take a number. 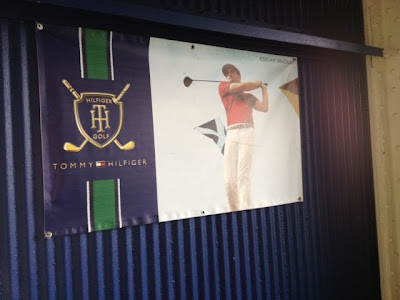 Ignore the corrugated steel, inside-of-a-shipping-container appearance; this is a classy place. 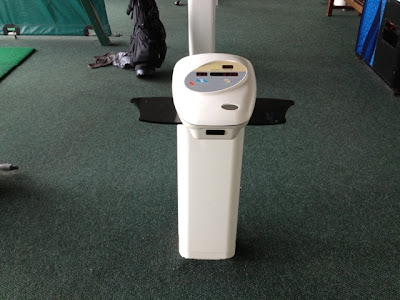 Welcome to the future of golf ball dispensing. 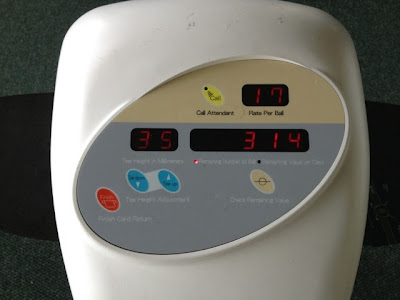 The control panel. Tee height is adjustable for your pleasure. 17 cents is the off-peak per ball rate. Peak is 25 cents. Ow, expensive balls. 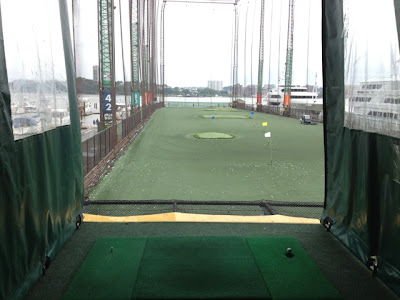 The view from the second level. There are four levels in all, but to ensure the safety of boats out on the Hudson, no woods or drivers are allowed on the third and fourth. It's 200 yards to the back net, which is a good amount of room, but only a narrow 40 yards wide. 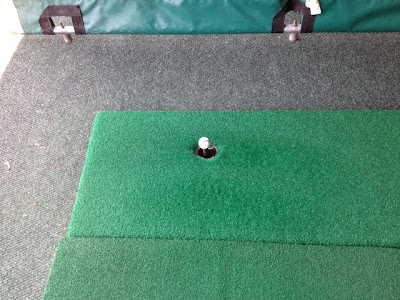 Balls fed to you one at a time by the machine. Soon as you hit it another one pops up. If you don't take your time between shots, you yourself can lapse into machine-mode and start whacking ball after ball. Which for the most part isn't good golf practice. Probably good for revenue though. Sad, all this technology just to replace the good old-fashioned bucket of range balls. A step backwards if you ask me. 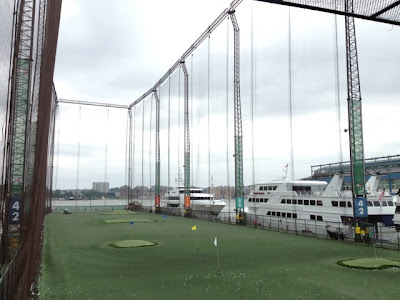 The giant nets are lowered when it gets windy, probably keeps the whole thing from toppling over. 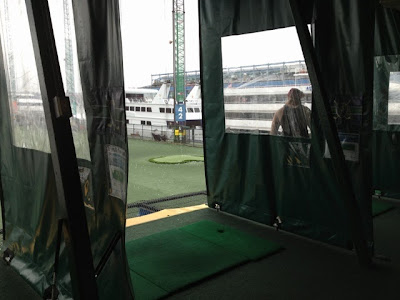 I've been coming here sporadically for several years, have hit tons of balls and generally I never expect to hit it well here, no matter what condition my game's in. Not exactly sure why that is but it's probably something to do with the close confinement. Using a long club, it's not unusual to whack the partition behind you on the follow through. Plus the box is so narrow it makes it tricky to aim a shot other than parallel to the partitions. 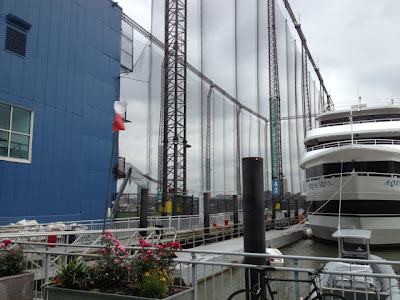 Ok so I think I've hit enough balls for today, so let's snoop around the pier. When I say the range is built on a pier, I'm not kidding around. These are active docks for yachts, tour boats, party boats etc. I heard that Nicki Minaj once threw a party on this big one. Don't know who that is? Well, good! 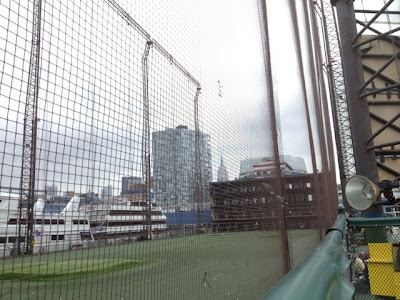 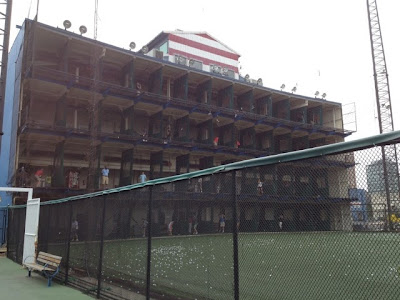 A revealing panorama of the whole situation in all its cruel inhumanity.

That said we have to be grateful for this range. For it is better than nothing. Even though I have some beefs with the narrow spaces and the auto-dispensers, I'll go out on a limb and say that it's way better than nothing (high praise indeed). In a last resort situation, like in those deep desolate winters, when the urge to whack balls becomes too much to bear, this place tends to come in handy. Before it opened around '96, try to hit a full golf shot in somewhere in Manhattan and you'd probably end up in jail.
Posted by Legitimate Golf at 11:21 AM