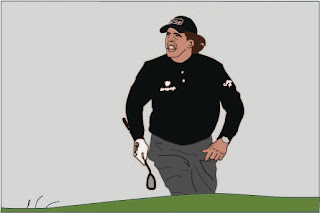 Yesterday in Inverness, Scotland, World Golf Hall of Famer Phil Mickelson did something that surprisingly, he had never done in his legendary career and that is to truly enjoy himself on a links golf course. Unlike his old foil Tiger, Phil had never managed to really show off his awesomeness at the home of golf, or anywhere in Europe for that matter.

It's just his third victory outside of the USA. (The other two came in China, where Phil is revered as a demi-god.)

Thankfully the whole Mickelson brood was on hand this week, obviating the need for any mid-tournament transatlantic jetting back to San Diego because someone had a little league game or something.

Continuing a recent trend, NBC decided to air the Scottish Open's final round live. It's a bit of a gambit given the aversion of US audiences to all things European, but good old Phil made sure this broadcast wouldn't flop. Perhaps thinking of his fans watching on TV back home, he delivered the entertainment in a big way with a couple of vintage, that's-our-Phil moments down the stretch.

First he bungled a simple two-putt from about fifteen feet which would've ended the tournament on the last hole of regulation. It was pin-high and a garden-variety straight putt, but perhaps feeling some nerves, he blasted it six feet past and then missed the comebacker.

Then, on the first hole of sudden death, with opponent Branden Grace lying three and looking at a likely two-putt par, Phil produced a blind pitch shot off an unbelievably thin lie, that took the break just right and spun back to within a foot for a tap-in birdie. Now I'm not the biggest Phil-phan, but I was watching live and let's phace it--it was phucking phantastic. A career shot, and very phitting (ok I'll stop) to cap it all off with the kind of risky, impractical aerial golf that the American has become a synonym for.

Now that he's finally tapped into his inner "Phil McKelson" and finally won on a links course, this week's Open at Muirfield becomes that much more interesting. Or not. We'll see.
Posted by Legitimate Golf at 8:54 AM