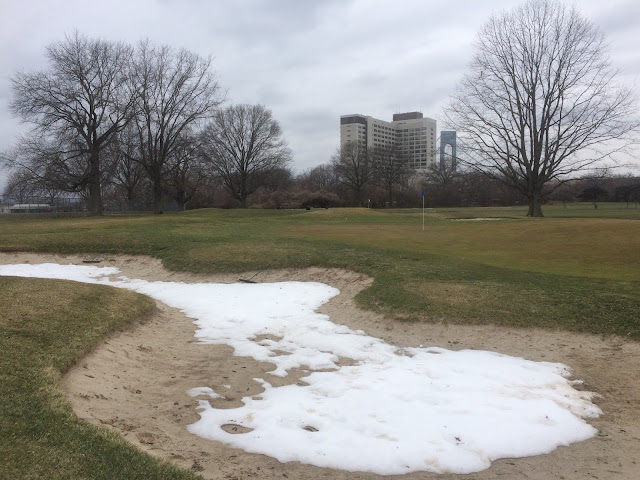 Wow, what a wild ride this wintergolf season has been, right? The highs. The lows. But really mostly the highs. November through February, the entire period was positively gay with unseasonable warm weather and golfing joy, and not just here. All across the northern latitudes, people wintergolfed their faces off.

If you ask me, it was too warm for a proper winter. I am not complaining that hard though; I simply had to seize opportunities on those lucky days when it did get cold enough to keep the courses mostly empty, yet not so much as to bring hypothermia into play. Over the last few years I got myself addicted to the natural high you get from blazing through an entire 18-hole course in a brisk, nostril-clearing two-and-a half hours. (Or less!) 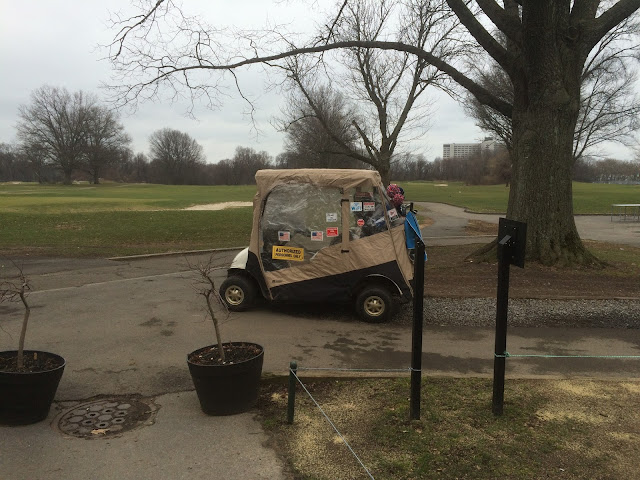 Which makes this part of the year such a bummer. The spring-golf blues. It's been nostalgically winter-chilly lately but let's face it, the writing's on the wall. It's almost April and the days are getting so long now. Those few bits of snow still scattered around the earth, is likely the very last snow we will lay eyes on until next Yuletide at the soonest. The march towards short sleeves is officially on.

In other words, the wintergolf dream is all but over. 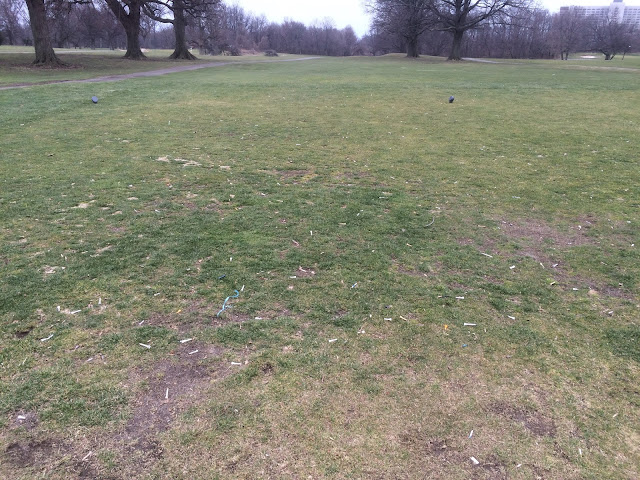 However last Sunday, the temperature dropped down one last time into the mid 40s, with winds up to 20 miles an hour that made it feel around 40 or below all day. And thus I am given one more chance to layer up and live the dream. 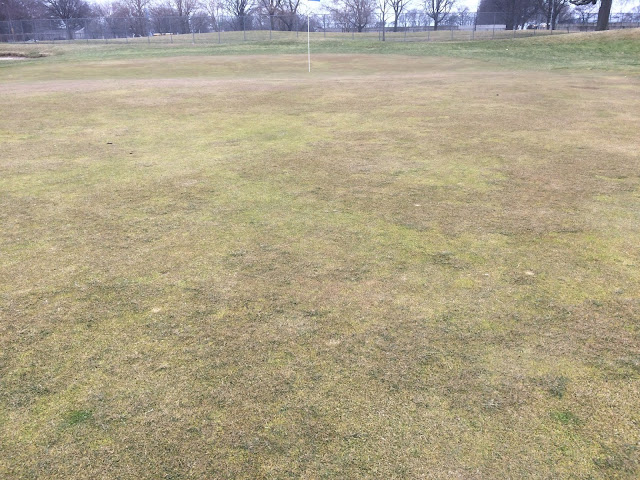 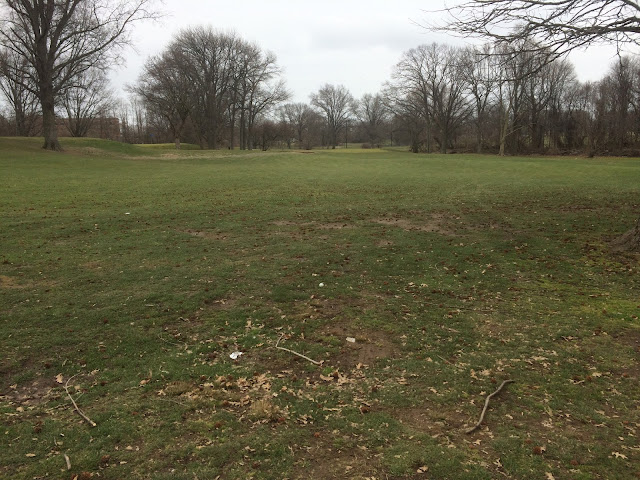 Due to our untimely snowstorms and chilliness, the turf is still languishing in a deep-winter funk here in late March. The calendar may say "Spring" but the golf course, has not even woken up or begun wiping the crud out of the corners of its eyes. Grass is not growing. The putting surfaces are still untended, full of pockmarks and decidedly unsmooth. The fairway grass, so thin, balding and matted down, with wet soil underneath, creating a most unforgiving surface from which to have to hit an iron or egads--a wedge. 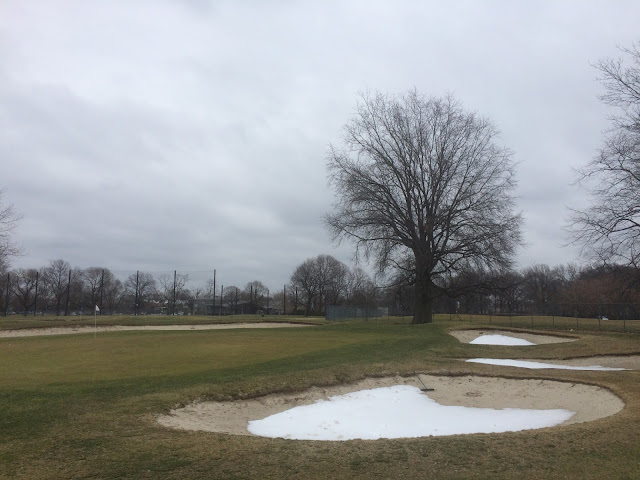 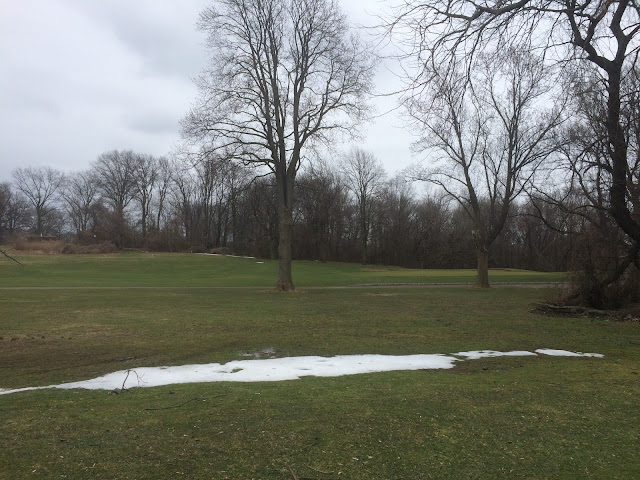 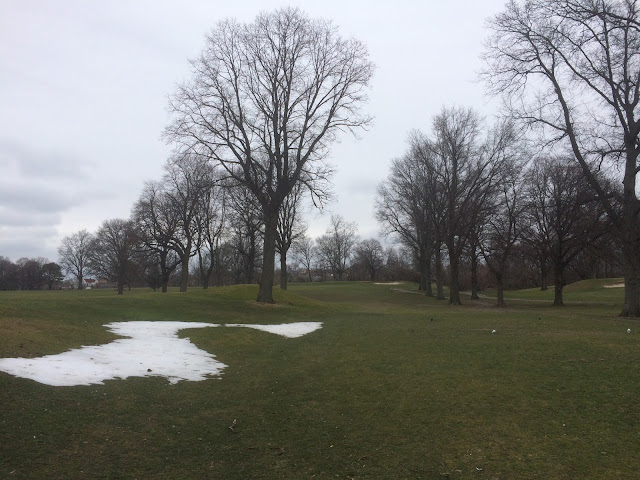 One advantage of playing wintertime speedgolf is that there is not much time to dwell on such substandard conditions or the horrible shots they can wreak. In the middle of the round I laid hideous, thick sod over two straight pitch shots and as mad as it made me, the urgency of the overall mission kind of took precedence. Must move onward, less we freeze our ass off. 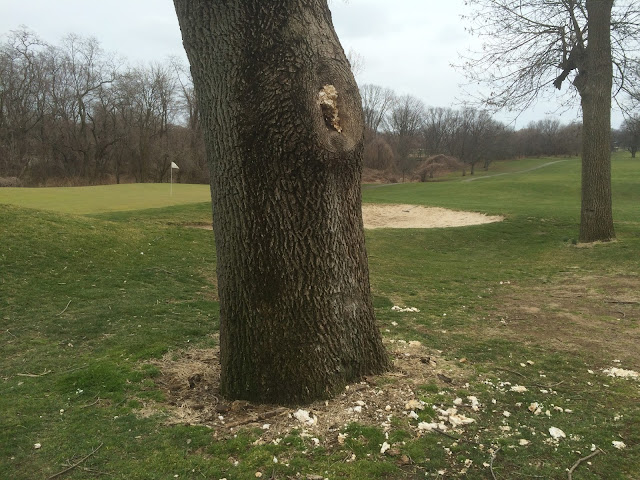 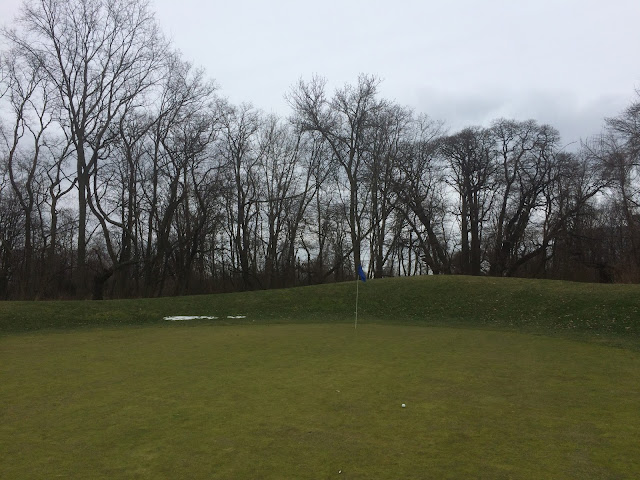 If the number of strokes (178) for my doubleheader was unremarkable, the elapsed time was something of a benchmark: pedal to the metal, I played a legitimate 36 holes in three-and-a half hours while fully abiding by the Spirit of the Rules. The only concession I made to "winter rules" was leaving the flagstick in while putting, which the USGA is considering legalizing anyways. 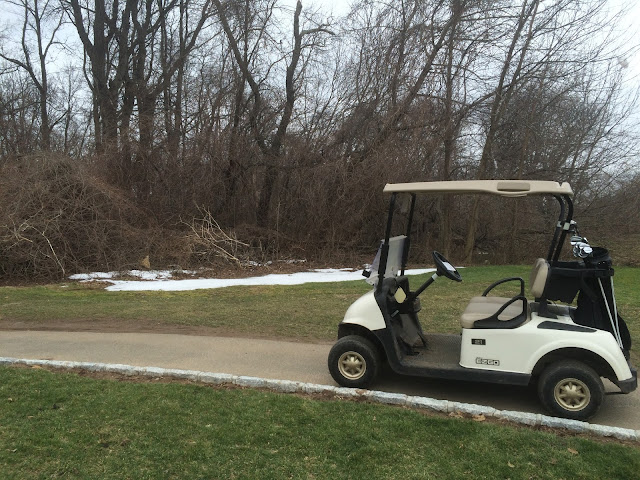 I had a great time overall. It was very cold but I made up for it with speed and constant motion. I'd park the cart and jog to the greens. I mostly skipped the practice swing too.

The course was as empty as you will ever see it. Might have spotted a couple of groups off in the distance but mostly it was as if the whole place had been reserved for me to play a private round. 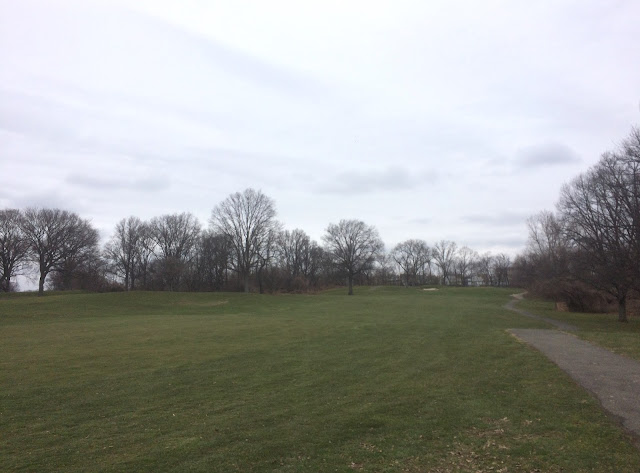 I can't really overstate my disappointment over the end of the season. Enjoying this extreme form of the game, I feel I have re-connected with the true meaning of not just golf but goddamn sports in general. In the cold desolation of an empty golf course, I might have even discovered my self. I know this makes me sound like the main character in some gay John Denver song but I'm sorry, this is how I feel.

I'm going to miss sipping on steaming hot tea from a vacuum flask, all toasty inside my base layer, inside my insulation layer, inside my outer layer, underneath a microfiber beanie, standing on the first tee and looking out at the panorama of empty holes laid out before me.
Posted by Legitimate Golf at 1:30 PM