Here's a tasty bit of spam that I found in my inbox last week. Ok maybe spam's a little harsh. Primetime tee times, twilight prices, practically all day. Can't pass that up. You just can't. As I've made known, it continues to be a rough year for me handicap wise, and I can't say that I've played a good round yet. Can't even beat my own bloated 11.8 index. So the email's a clear sign--the time is now. 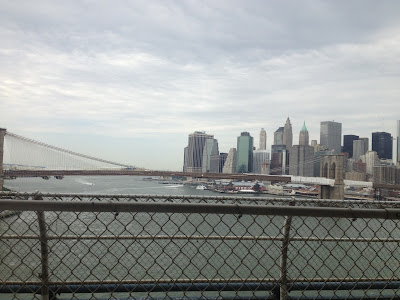 I missed the comfy express bus and ended up taking the subway. The view of the Brooklyn Bridge and downtown from the southbound R crossing the Manhattan Bridge is the highlight of the trip.

At the pro shop desk, a sign informs: greens had been aerated last week. Ah. That's why the deep discounting. See, I remembered, there's no free lunch, not in this corner of the golf world. You can't sweat it too much though. Tom Watson shot a 58 at his home course on aerated greens.

I played in a ragtag group with three other singles. They were all pretty choppy golfers but at least they all walked and carried.

In usual New York golf style I went straight from subway to the street to the pro shop to the first tee and pretty much just cold teed off. So no surprise that I played the first nine without a swing, just getting by on local knowledge and a little blind faith to scrape out a 40.

After making the turn some big dolt accosts our foursome on the 10th tee. He asks if he could join the group. He claims the starter approved this idear. I looked towards the first tee; I couldn't spot a starter. Whoever it was, I wished I could give him a piece of my mind. The group rebuffed the dolt, but kind of weakly. "Ok we'll see then," he says, as there's still a couple minutes to wait for the fairway to clear.

The four of us teed off, then tried to walk off and kind of tacitly snub the guy but then he starts putting on a glove and reaching for a driver. "You know what if you guys don't mind I'm just gonna join up with you."

The group just kind of looks at each other; one of us, being overly friendly, says reluctantly, "Well, I guess I don't have a problem with it." So I have to speak up--"Well, I do." I turn to the dolt and say "No, I'd rather you didn't. A fivesome is asking a lot. Anyways, the group behind is pushing up on us as it is. If anything, we have to hustle to keep up with the group ahead of us."

OK. Either he's having a comprehension issue with my explanation, or trying to fool us with some retard logic, but okay. "No, it's not just about us. It's about the group behind us, and everyone behind them. If we become a fivesome, it's gonna make everyone behind us wait even longer." With that I turn and start walking.

"Alright then. I'll just hit up behind you. Keep a heads up though, I'm gonna play fast."

Nope, sorry not even gonna dignify that with a response. Just keep walking.

Even though I started to swing with some confidence, the back nine proved to be fraught with peril. The aerated greens and mangled cup lips would only be kept at bay for so long. On the 12th hole I somehow lipped out a one-foot no-brainer for bogey. So now I'm +6 through 12. I now need to play the last six holes at no worse than +2. Probably the toughest stretch of holes on the course. 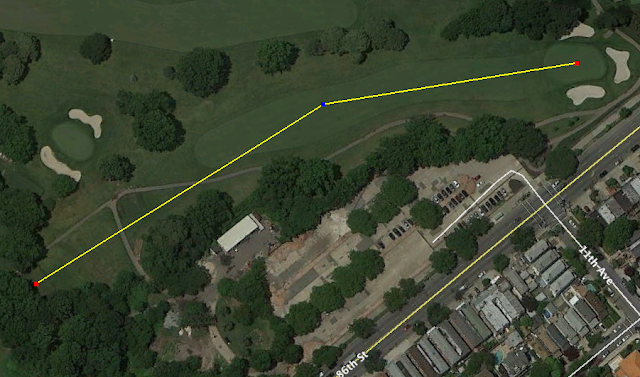 The 18th is one of the hardest tee shots on the course. There's really no room on the right. Not much room to bail out left either. With some confidence I pick driver. Put a decent swing on it and kind of thin it to right fairway, quite serviceable. Now just a straight shot to an easy pin remains. But maybe a little nervous I chunked the 9i approach short. Chipped it up on a good line but short.

So now, a left-to-right eight-footer for a 79. Kind of a lot to ask from a near 12-handicapper. Anyways breaking numerical barriers in golf is arguably meaningless. Anyways breaking 80 is fairly weak right? Like being able to dunk a tennis ball, maybe. Then again scoring's arguably the essence of this goddamn game. The ability to play against score is what can add serious emotional stakes and make everyday golf exciting.

So go ahead, make this putt, it'll be the difference between feeling crappy or feeling great on the ride home--a lot at stake. I make a confident stroke, aiming about three balls to the left. It looks to be low but somehow, it holds its line all the way in. I give out some hearty handshakes and walking off the green one of the guys says to me, "Someday--I wanna play like you." On top of all that I finished just in time to catch an express bus, that zipped into Manhattan in less than half an hour.
Posted by Legitimate Golf at 10:47 PM