PGATOUR player Luke Donald is not very good at driving. Relatively speaking--after all he is among the best in the world.

But for a short hitter he is also pretty wayward, having ranked 37th, 57th, 120th, 114th and 158th in driving accuracy over the same period. In the "total driving" stat, which combines the distance and accuracy stats, Luke has never ranked higher than 121st.

I was watching the replay of the WGC Bridgestone Invitational yesterday and saw him hit a pretty bad duck hook, and it occurred to me then that Master Luke has never really seemed all that comfortable hitting the driver.

Now I bring all this up not to blast Luke Donald on the internet. If anything it is a credit to his overall game that he's been able to stay at the upper ranks of golf for the past few years. I'm just trying to understand my own driving problems I guess. (Chances are some of you reading this have driver issues of your own.)

I wrote in the last post about playing a 6500y course without hitting the driver once. It was tight off the tee, but because I relied on the 3-wood I was able to put it in play all day. It was fun, it was liberating. And since then I've been pondering the role of this stupid driver in the modern game.

If a guy like Luke, with access to the finest clubfitting in the world and what is generally regarded as one of the most enviable swings around, cannot sort out his driving problems, what does that suggest for the rest of us? Well I'm gonna go ahead and propose that maybe it's the club that's causing all the problems. Of all the clubs in the bag the modern driver's an anomaly, a specialty club engineered for maximum speed. A typical driver these days is just under four feet long and light as a feather compared to the 1-woods of yesterday. They are routinely given highly suggestive names: Burner, Launcher, Rocketballz.

TaylorMade may have been the first OEM to produce a metal wood, but it was probably Callaway that launched this current culture of violent, reckless, indiscriminate driving with the introduction of the "Big Bertha", named, rather callously if you ask me, after a WWI killing machine.

With all that wanton speed, naturally you also need forgiveness and thanks to modern metallurgy, drivers have faces so tall and deep you could hit at least two balls at the same time off them. Let's face it, they appear to be designed more for avoiding whiffs than for precision ballstriking.

It wasn't always like that though. The longest club in the bag used to be called a "1-wood", and was pretty much just a larger version of the 3-wood. A reasonable person could even hit it off a fairway lie.

I started playing well into the Titanium Age, but its always been tricky for me to hit this thing, or even to set it up right. Like most people nowadays I use a 460cc club. It seems to require such a different setup than all other clubs. I look down at address lately and I'm still not sure of what's what. Am I playing it far enough forward? And still not sure where the sweet spot is, and never quite sure of how the clubface is sitting, open or closed.

I've been getting better results lately with a 3-wood. Weird. Even though a 3-wood head is tiny compared to a driver's, it seems so much easier to make good contact. I don't think I'm alone here--the best guys in the world (Phil and Tiger) have been shooting low scores and winning tournaments while abstaining from the driver. Phil went all out and replaced driver with a souped-up 3:

This thing is tiny--250cc's, just over half the size of a typical driver. And we all know how that's been working out: 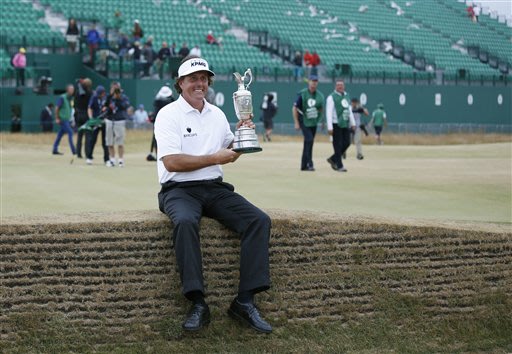 Ok, I realize that plenty of people use the modern driver with great success. But clearly this is not working out for everyone. The future of driving is still unwritten. Who knows, maybe things will trend back towards smaller, more controllable clubheads.

For now I'm going to try relying more on the fairway wood and reserving the driver for only the most forgiving situations. So I'll have some longer approaches to the greens, so what. At my level I'm scrambling for a lot of pars as it is. I'm guessing it won't impact overall scores all that much. We'll see how it goes.

How about some feedback in the comments. How's your relationship with your driver?
Posted by Legitimate Golf at 1:51 PM