In the last post I talked about negativity, and how it sells. Well I want to sell too, so here goes. We all know that the world of golf is lousy with lousy personas. From time to time, why not put the spotlight on some of them? Maybe there's a lesson to be learned for all of us.

Ted Bishop is the current president of the PGA of America. (Respect.) I had never heard of him until this week, when he laid this gem via Twitter.

Clearly he's alluding to the slow play issues that have popped up on high-profile stages recently--this year we've had the slogfest of Tiger's final round at Torrey, and then there was the Chinese wonderkid at the Masters, then there was the USGA getting all up in our business with their cutie-patootie campaigns.

And in this one little twitter post he manages to 1) take credit for Jim Furyk and Jason Dufner's pace of play b) declare the PGA of A's ownership of the very concept of pace of play and 3) implicitly call out the PGA Tour, Augusta National and whoever else had a slow play issue, practically gloating about them not keeping their players in check. It's not just what he's saying--it's how he says it. The emphatic caps, that noxious hashtag. Ya, ok Ted. Take it easy.


We got another dose of Ted's crap this week as the PGA of A all but announced that it's chosen Bethpage Black as the site of the 2019 PGA Championship and the 2024 Ryder Cup. Per the AP:

''We've had a great relationship with the state of New York, and it's escalated this week,'' Bishop said at Oak Hill. ''New York is the greatest sports city in America, and the Ryder Cup is the greatest event in golf.''

Now I'm not going to begrudge the choice of this course for those events. Because in many ways, its an ideal venue for the biggest golf events in the world--a massive site with lots of room for galleries and tons of parking. But this business about New York being the greatest sports city is pure jive talk. Arguably it is among the worst. I have this one neighbor, and I can hear him in his living room watching Knicks games, Giants games... you know what, I'm not even going to get into it.

In any case, for those not familiar, Bethpage is most definitely not New York City. It's a good 30+ miles out, and is pure Long Island in character. Not that we should be surprised, not at this point, that such a greasy bootlicking remark like that would come from old Ted.

So there you have it, for all the gloating, overreaching Twittering, shameless pandering, bald-faced elitism... your first ever LG Creep of the Week. Enjoy it Ted. Hopefully this won't literally be a weekly award, but perhaps we'll just break it out on an as-needed basis.

But I guess when you're talking about "the greatest event in golf", the one that lasts all of three days, and involves all of 24 competitors, on a regulation 18-hole golf course... you need a good eleven-year head start to get things ready. 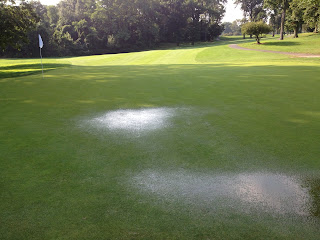 Speaking of negativity, I tried to sneak in a twilight round earlier in the week. It was a total flop, and I couldn't even manage to break 90. But I guess some of you like hearing about NY golf horror stories. As you can see it was wet everywhere and the cups were pretty wrecked. Lip-outs all over the place. 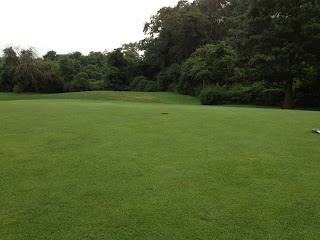 It was hard to capture in a photo but in that last one, the hole is perched on the tippy top of a little mound, a three-putt if you're lucky. The superintendent at Dyker Beach GC being an asshole again-- shocker.

Let's get real here though. Pretty sure a lot of my problems come from standing too far away at address. So I'm thinking of this quote often. These guys are among the best strikers in history but just what in the hell are they talking about? Are they extolling the virtues of standing close to the ball, and the closer the better? Or is this a warning that we must not stand too close to the ball??? Surely they meant well but taken on it's own, that little statement is a semantical nightmare. Help.


"It's possible to stand too close to the ball, but nobody ever does." -- Ben Crenshaw

Ahh thanks Ben. That's the straight dope I was looking for.
Posted by Legitimate Golf at 8:42 AM