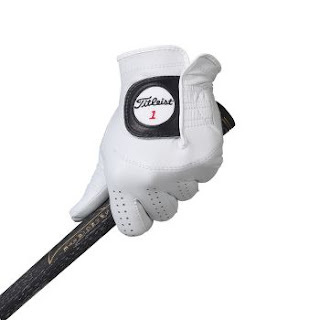 The glove, it's such a fixture in golf. The overwhelming majority of people who play golf, do so while wearing one white glove.

The single white glove in golf is so common you probably don't even notice it any more than a headcover on a driver--it's only noticeable when you see someone without one.

On any hot northeast summer day, I can sweat through mine pretty quick, quite the nuisance. What to do? I tried the rotating multiple gloves thing, but that's a major pain in the ass. And anyways getting all soaked with sweat really does a number on fine cabretta leather--the glove's never the same after that.

The other day, rather than wage another losing battle with a sweaty glove I said "screw it" and tried something radical: barehanded golf.

And what do you know everything turned out just fine. Clubs didn't go flying, I swung it pretty much normal and there was no chafing or heinous wear and tear. Plus the extra feel of the club, you can't knock that. (Especially for someone who might be having a bit of a grip crisis.) In short, playing sans glove did not seem all that different.

So then I wondered: Why was I always so attached to this glove-wearing, exactly? (Like everyone else I've been doing it since I started playing.) Do I actually need one... am I even acting on my own will here... how much of this behavior is ritualistic? Who decided that I needed to wear one?

I wondered if wearing the glove is some vestige of a past era and its inferior equipment. After all in the old days grips were typically made of leather, which has a way of becoming slick and losing its tack after a bit of normal use. In contrast, today's grips typically have plenty of tack, while being quite soft to the touch--and those are the conventional rubber ones. The supermodern deluxe grips use space-age polymers, have even more tack and are even softer on the hands. So I don't think slippage or skin-trauma are big problems these days.

Searching the internet I discovered this helpful page from Golfsmith.com titled "The History of the Golfing Glove":

For right-handed golfers, a golf glove is worn on the left hand. The opposite is true for left-handed players. Because gloves are so popular today--they are as much a part of the golfer’s outfit as shoes with spikes--it may be somewhat surprising to learn that wearing a glove when playing golf was not the norm for some of the game’s legendary players in the 19th and 20th centuries.

You don't say. Tell us more.

Golf gloves made their first appearance on the market in the late 1800s. The Rawlings company patented a golf glove design in 1885. In 1899, advertisements for the “New Simplex Glove” could be found in "Golf Illustrated" magazine. The June 1915 issue of "Vanity Fair" magazine featured fashionable gloves with pleats on the back to provide more room for a player’s knuckles.

By the way, wow--they had golf magazines in the 19th century. I think that predates indoor plumbing. To think, people were sitting in their outhouses, pondering their golf games, thumbing through the latest issue of "Golf Illustrated" by candlelight. Humbling.

Golf gloves were developed to address the problem of slippery golf club grips. The wooden-shafted clubs of the time had grips made of strips of leather that were wrapped around the top of the shaft. Humidity or dirt on the grips made it difficult for golfers to maintain a firm hold on the club. Gloves also protect the golfer’s hands from wear due to extended practice or playing sessions, which causes painful blisters and calluses.

YES--love it when the internet confirms my educated guesses. But if mankind has figured out the slippery golf grip problem, then why are we all still wearing the glove? As is often the case, a close examination of history can tell us a lot about our present situation. Let's read on.

Despite their utility, golf gloves did not gain a grip among the buying public in the early part of the 20th century. Photographs of major golf tournaments reveal that the top players, including Walter Hagen and Bobby Jones, did not wear gloves. Because amateurs emulate the style of pros they admire, the average golfer did not gravitate to wearing gloves, either. Club makers worked hard to develop grips that provided more security. Gloves were still somewhat of a novelty.

Glove styles at this time included fingerless models and backless versions. A change in the pros’ perception of gloves occurred when one of the top players of the 1940s, Sam Snead, began wearing them in competition. They didn’t gain universal acceptance, however, because the other top golfer of the era, Ben Hogan, continued to compete without wearing a glove.

The early 1960s brought two new golf champions to the forefront, Arnold Palmer and Jack Nicklaus, who both had worn gloves since they began competing in amateur tournaments. Palmer’s habit of removing his glove when preparing to putt the ball was emulated by amateurs everywhere--he made the gesture seem “cool” at a time when golf was soaring in popularity.

Ah. So Palmer and Nicklaus (aka the Richie Fowler and Rory McIlroy of their generation) are why I wear a glove in 2013. All that wanton cowhide consumption over the last decades, it's all on those two. It just goes to show--golfers were just as pitifully impressionistic and fanboyish back then as they are today.

As of 2010, FootJoy estimates that 85 percent of all golfers wear gloves. Among PGA tour pros, the average is even higher, nearly 95 percent. One notable exception is major championship winner Fred Couples, who believes he gets better feel for the golf club without a glove on his left hand. 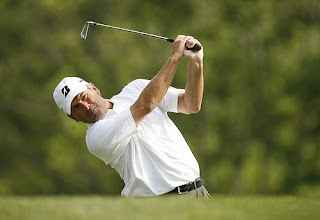 That's right--golf's undisputed king of cool wouldn't be caught dead in one of those fuddy duddy gloves. 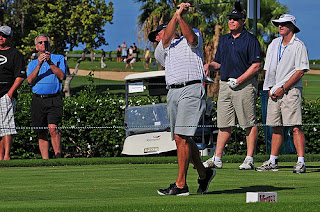 Or socks for that matter. See when you are cool like Freddie, you think for yourself. You do what feels right for Freddie and you don't care what about what the other ninety-five percent of your peers do. And that, is pretty cool.

Anyways, the point to all this is why--why wear the glove? Not saying there's anything wrong with it. I think there's plenty of people who benefit from gloving for one reason or another. But it's a little hard to believe that those people make up 85-95% of all golfers.

Let's face it--people and especially golfers are prone to ritualistic behavior. Wearing the single white glove has simply become part of the textbook of golf. Kind of like using a coin for a ball marker, it's just something people have grown to like doing. One of those little things that helps make a person feel like a golfer I guess.

So, in the comments let us know--Why do you wear a glove. Really dig deep and search yourselves for an honest answer here.
Posted by Legitimate Golf at 12:35 PM

Email ThisBlogThis!Share to TwitterShare to FacebookShare to Pinterest
Labels: white golf gloves, why do golfers wear a glove