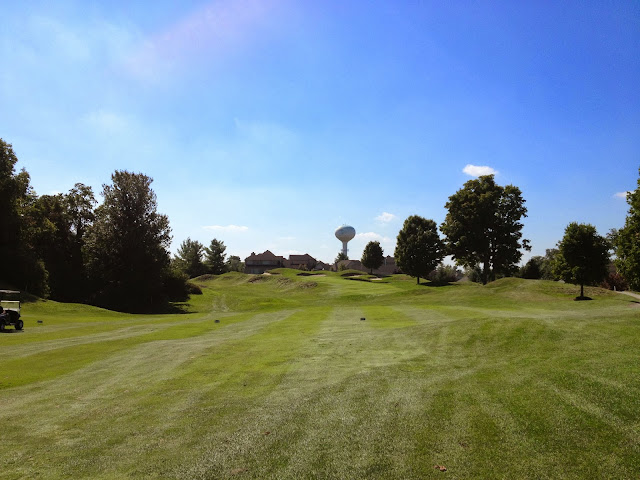 Last week I celebrated a birthday. As we did the year before Ms. Legitgolf and I drove about an hour and a half outside the city to play at a fancy course. Last year we had a memorable round at the Jack Nicklaus-designed Mansion Ridge in upstate NY. This year I picked out Crystal Springs, a resort course located up in northernmost New Jersey in the Appalachian Mountains, part of a massive seven-course complex. 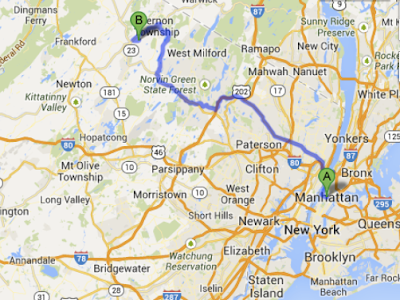 Browsing for tee times online, I spotted one at a really good deal, so I acted fast to secure it. Though I had long known of Crystal Springs, I hadn't really bothered to do much research into the actual course before buying--only after prepaying for the greens fees did I find out that I had just booked us at the most difficult course in New Jersey.

Now I mentioned in an earlier post that the first Brooklyn Open is nigh, and that I need to lower my handicap by mid-October if I'm going to have any hope of entering it. It's a good goal to strive for, right? However to play on the most difficult course in New Jersey for the first time is arguably counterproductive to such a goal.

What's more, my playing partner for the day Ms. Legit, is still a rank newbie. It's one thing for me to try and face off against a tough course but to put that on someone who's still learning is pretty harsh. Golfers at that level are still trying to gain control of the club and ball for crying out loud; for them to take on challenging course design is nothing more than a recipe for futility.

Oh well--the tee times were set in stone at this point. All I could really hope for was an empty-ish course where we might play as a twosome, as we had at Mansion Ridge.

However on a Friday, with near-perfect late summer/early fall weather, the course was fairly bustling and we got paired with a couple of singles--two WASPy guys, seasoned golfers who could put a good strike on the ball. Which for Ms. Legit meant playing with three fairly long-hitting golf poseurs, which I imagine would be kind of annoying. 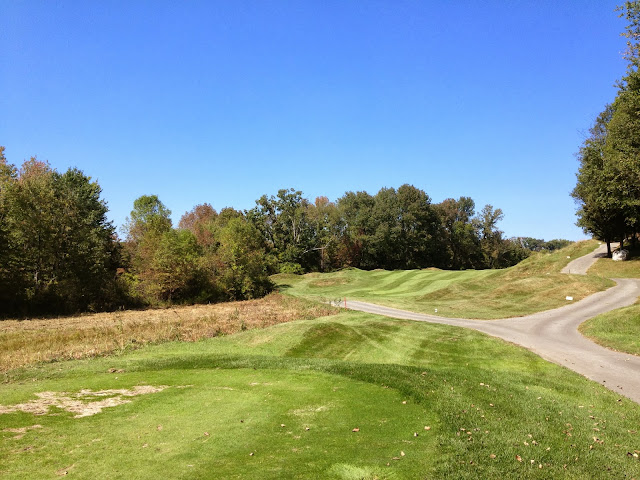 For her the course was indeed too much, even from the red tees--forced carries over water, blind shots, heavily trapped greens, acid-trip mounded fairways, pool table putting speeds. 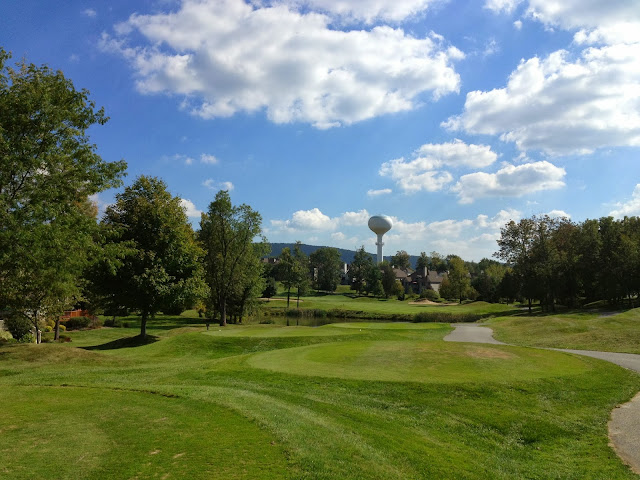 The course was not without its scenic charms though. Here on the 10th hole are some of the clear waters that inspired the name of both this course and the entire resort complex. 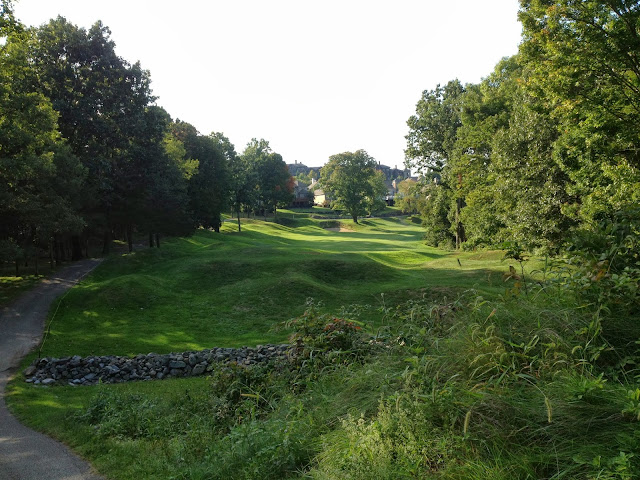 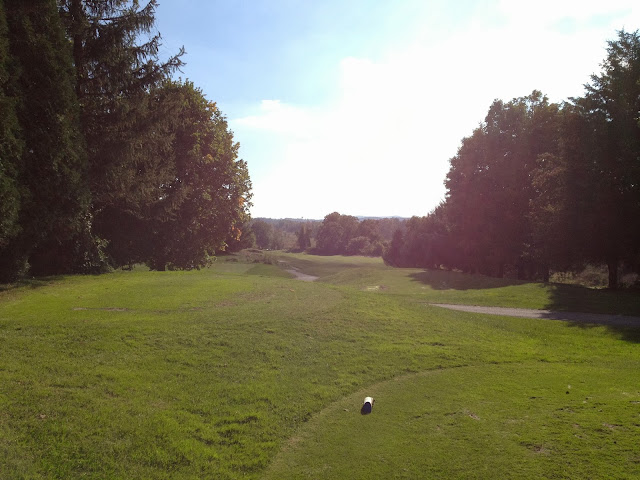 Actually, the course eventually brutalized each person in the foursome with its tight lines and plentiful trouble. Everyone experienced some blowups at some point or another. 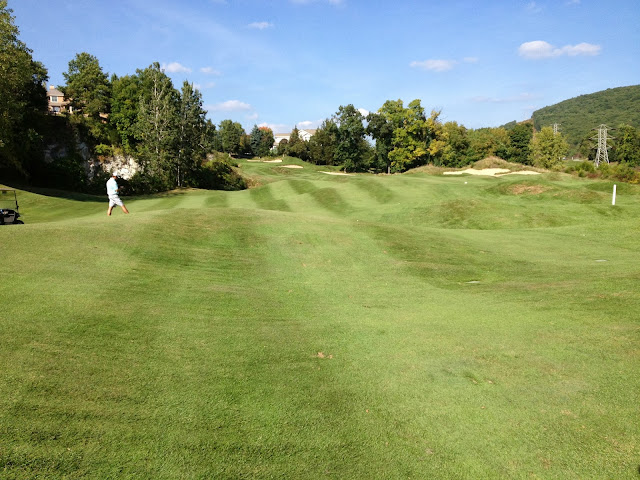 This poor guy hit a nice-looking short iron approach at the middle of the green, but when we got there it was nowhere to be found. Check out the severe mounding here--put it this way, there's a multitude of opportunities for reckless drivers to flip a power cart. 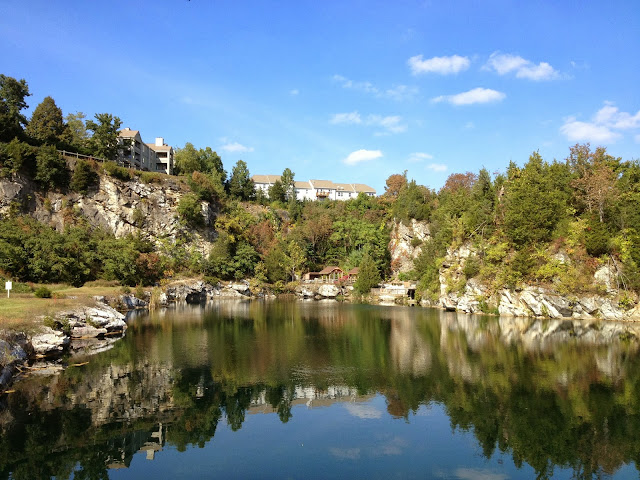 By far the most memorable part of the course is the par 3 11th hole, which sits on the site of a former quarry. 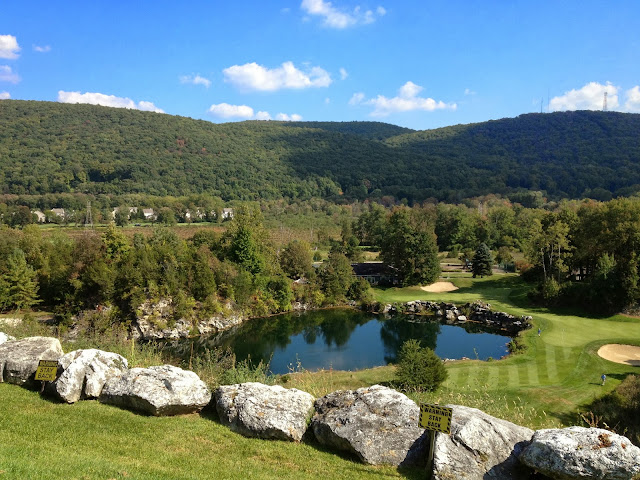 The tee stands some 80 feet above the green. The dug-out shape gives the hole a sort of walled-in, amphitheater feel which I found pretty cool. Those "STAY BACK" signs aren't kidding--beyond the rocks is a sheer drop. From the tee, people on the green look like ants. If you have any fear of heights, peeking over this ledge will make your palms sweat. 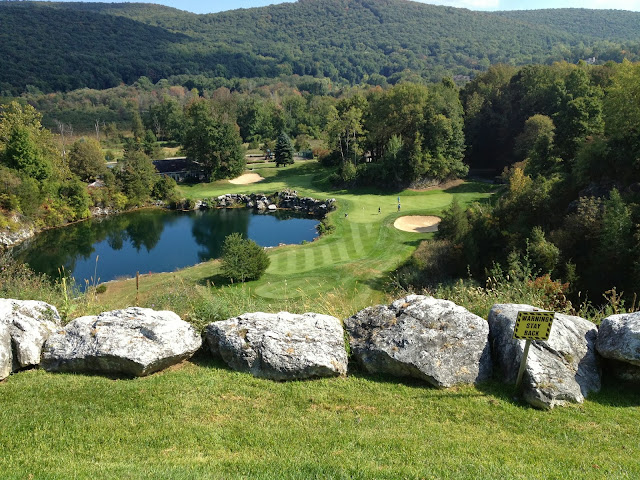 On this day I had around 133 to a front pin. Aiming for the big righthand portion of the green and playing a club less, I launched a wedge and it hung in the air forever, flirting the whole time with the water. It somehow held its line and finally dropped from outer space straight down on to that skinny little strip of rough between the water and the green, pin-high. A suspenseful, dramatic and ultimately exhilarating shot. 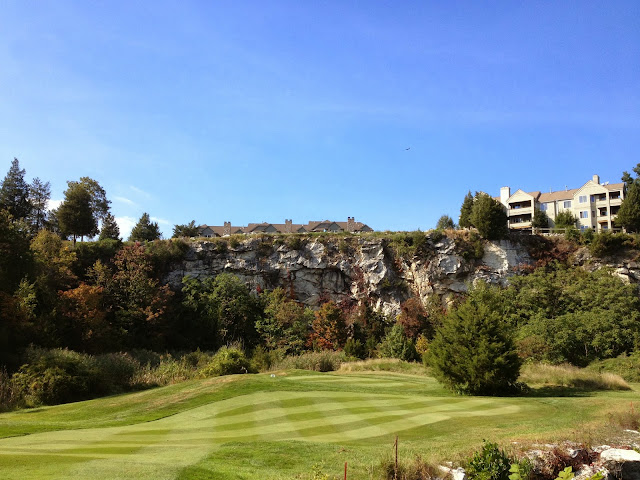 Here's a shot I took from near the pin, that gives a good idea of the scale here. There's two people standing on the tee, can you spot them? 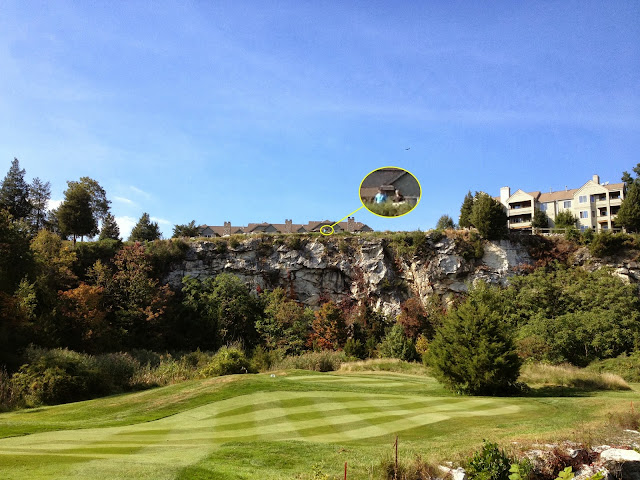 Maybe this illustration will help. 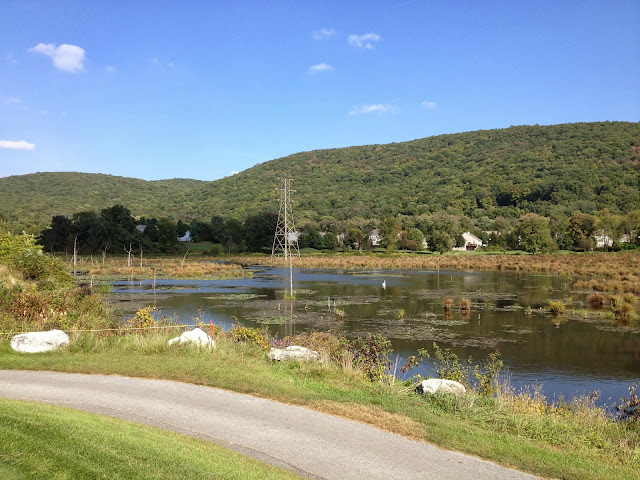 So you might be wondering how I played. At the end of the round I left the scorecard clipped to the steering wheel of the cart. So I had to piece together the score from memory.

And it was pretty ugly, uglier than it had seemed during the round. Despite a case of the low hooks, I got off the tee pretty okay considering what a narrow, penal course this is. But then I had a hard time with everything else. The crazy sidehill and downhill lies here can really make one look like a chump. And the rough around the greens along with the slick surfaces made for some difficult short-gaming. But I had a good time putting on the fast greens and actually did okay, rolled in a few. 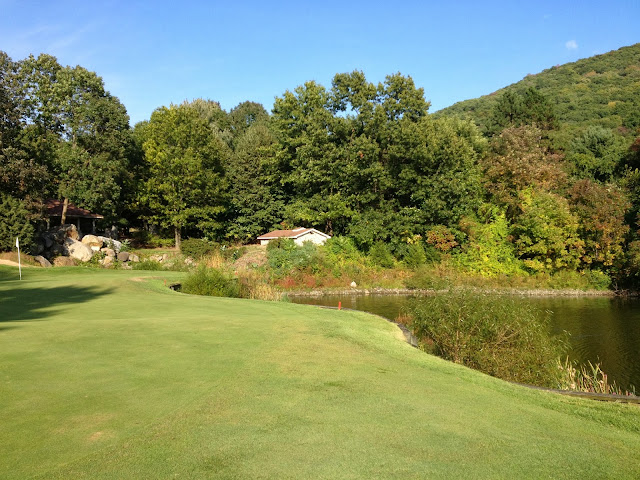 The 16th hole is where the round blew up to hell. OB off the tee, then aiming absent-mindedly towards the pin I put my approach in this water hazard. The next shot went into a severe downhill lie in a back bunker, from where I skulled it back into the hazard. I ended up with a septuple bogey. 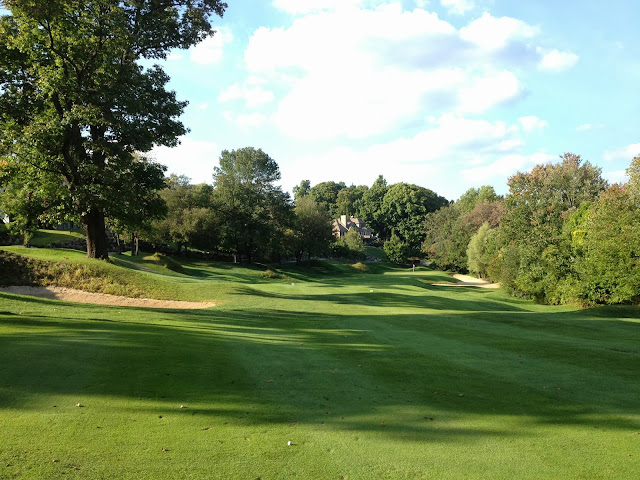 All in all it's a very nice place to be, a scenic property with tony accommodations. Golfwise though it kind of lacks soul and character and a lot of the holes, despite plentiful trickery end up being forgettable. On the 18th green, one of the guys in our foursome offered his weary half-joking assessment: "I hate this course."

Last year's birthday round at Mansion Ridge was a very different experience. It was almost deserted and even though it was about as difficult a course, the circumstances made for an eminently relaxing time. I shot an 81 which I felt pretty good about. This year was more of an extreme-golf challenge; it was a nutsack-splitting toil just to break 100.

Ms. Legit wondered if I'd had a good time. I nursed a stiff back all day and probably grimaced through the 18 holes. I explained to her that if you see me out there, as long as I'm still making an effort to get the ball in the hole, you can rest assured I am having a good time on some level, no matter how miserable I might seem. Because I get it. I know that we're fortunate anytime we can be out there swingin' and playin'. Especially so if it's on a nice course. See, I have perspective. 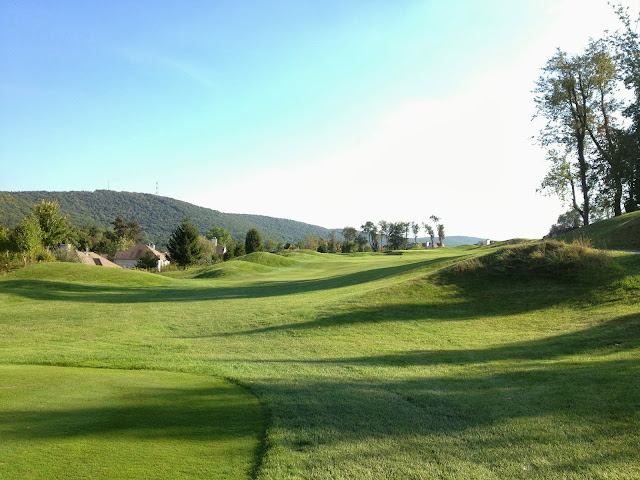 By the way this course plays 6,395 yards from the blue tees, so I stuck to my usual plan of hitting only woods off the tee. Didn't even look at the driver all day and the more I play this way, the more I'm convinced it's the way to go. I didn't watch much golf over the weekend but apparently some guy won the big PGA Shipping Cup trophy and did so without using a driver, adding more credibility to a point I made a while back about today's driver clubs. 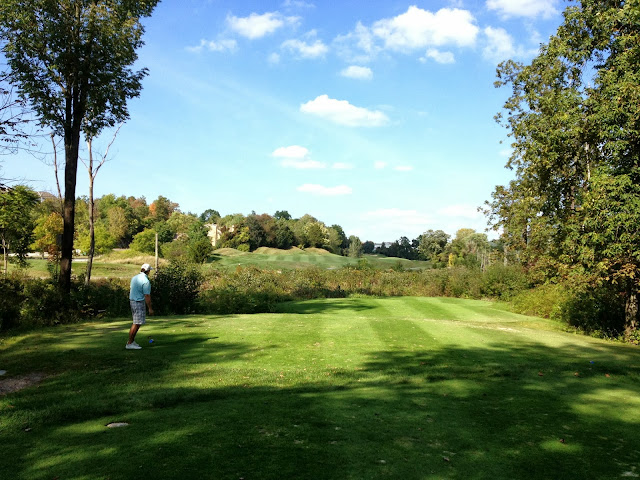 Because really, if you're on a normal length course and can manage to hit a fairway wood 250 off the tee, you probably won't miss the driver. The only reason to hit one is to try and reach the par 5's in two. Which you'd have to be a real asshole to try while playing on a course like this for the first time.

Anyways the more I hit woods off the tee, the farther they seem to go. During this round, even when I didn't strike it very flush, I was comfortably hanging with the two other dudes in my group, even outdriving them at times. If I manage to hit my 3-wood a tad thin, look out. For some reason it takes off like a bullet, then runs for quite a bit. If the fairways happen to be firm, forget about it--I'm probably outdriving you.

So back at home now, let's talk about the immediate future. It's time to get to work, in a sense. I'm going to put all these golf course exploring shenanigans aside for the next few weeks and instead put in some rounds at Dyker Beach, my nearest and most familar track, in the hopes of lowering my handicap and making myself eligible to enter the Brooklyn Open. Frankly I'm kind of freaked out by that prospect as it's an open, gross strokeplay professional tournament which means there could potentially be some really good players. But you know me, I'm fairly willing to subject myself to some real difficult golf situations, especially if there's a story to be had, right?

Anyways it'll be an uphill battle since I'm busy with work, and also been feeling kind of burnt out from my own spotty play as of late. But I promise to give it a good shot--keep checking back here for full, detailed updates on my progress.
Posted by Legitimate Golf at 10:46 AM