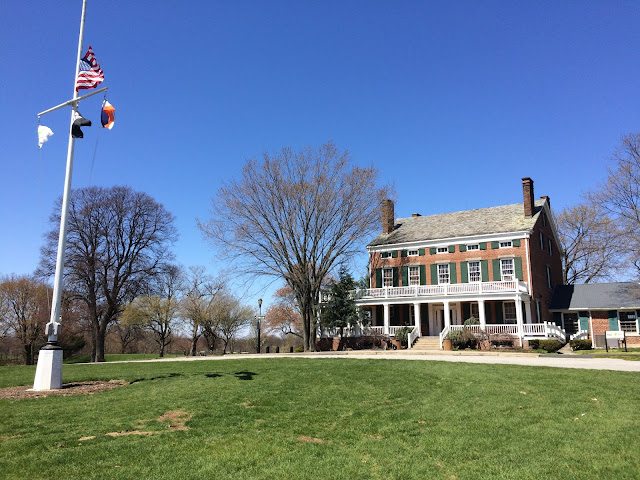 Once upon a time I set out with a dream. A dream of Playing Every Last God-Forsaken Golf Course in New York City.

I know, the LGNYCGT (Legitimategolf New York City Golf Tour) has been stalled for a long-ass time. Who are we kidding, it's been lying broke down on the side of the road, rusting. What can I say? The part of me that at one time longed to seek out golf adventures all over the five boroughs has, you know, shriveled up and died or whatever.

But what do you know, last Masters Sunday the old bus was up and running again, and even if it's by happenstance (i.e. the only place I could find a decent tee-time), we are now back en route to Playing Every Last God-Forsaken Course In New York City!!! 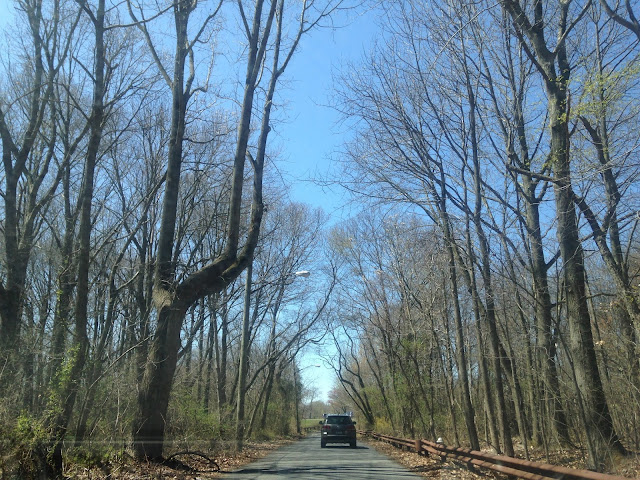 You know, the fact that it's taking me so long to complete the full tour is possibly a testament to the breadth of golf experiences the fine government of NYC provides its people with. If I can be gracious for a split-second here, I'll admit there is a lot of golf to be had within our humble city limits. Just talking about full-bore courses, the par 70 and up's, there are ten! Then there's also a handful of retro-length par sixty-somethings. A couple of pitch-and-putts. Even a nine-hole executive. (If you want to be an ass about it you could even cite Trump's place in the Bronx.) So, of the innumerable complaints a citizen could rightfully lob at this city's government, a dearth of golf facilities is definitely not one of them.

Frankly I wondered if I'd ever make it down to the two southernmost Staten Island courses. It's an exotic, far-flung foreign land to Manhattanites. If not for golf becoming an interest I can say with hundred-percent certainty that I wouldn't have ever set foot here. What few Manhattanites have ever made the journey were probably mostly golfers disillusioned with golf in Bronx, Brooklyn and Queens in search of a last resort asylum. The rest probably got lost and boarded a ferry by accident.

Anyways besides the gaping cultural divide separating us, those courses simply aren't readily accessible by public transit. By readily accessible I mean to say a trip taking less than two hours each way. By myself, the time/cost economics of golf in lower Staten Island don't work out. But today, as a twosome with Ms. L, we got here pretty quick in our hourly rental car. 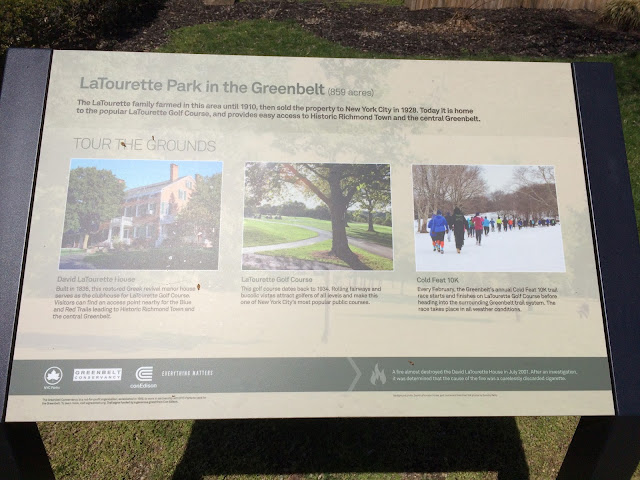 LaTourette Park is some sort of Historical Place. The La Tourettes were a family who set up a big farm here back in the 1800s. A very fine farm it is said. Sometime in the 1920s a new, snot-nosed generation of LaTourettes, I am guessing more interested in partying with Gatsbys and Buchanans than grubby farm work, cashed out and sold the beloved family property to the city, which built the front nine in 1929. Golf fever took hold apparently, and the back nine was added on across the road a couple years later. The rest of the property serves as public parkland and greenbelts and some other boring junk. 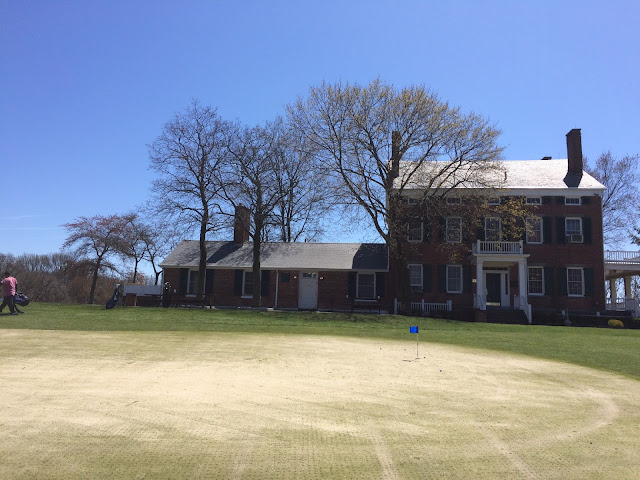 If this looks like a sturdy 19th century brick house with an aerated putting green in the backyard, well that's because it is, kind of. What's now the golf course clubhouse was originally the LaTourette's family home. And a very fine home it must have been. 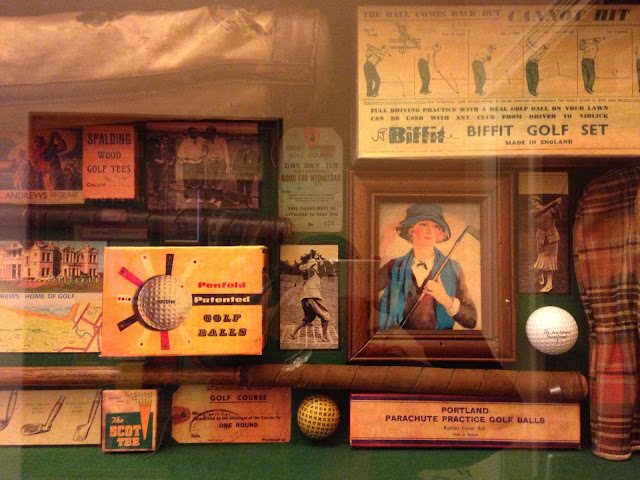 In a rush, I didn't have much time to snoop around the clubhouse, but they've got some artifacts to remind you that this course is old as dirt. Going strong since 1929--that is pretty cool. 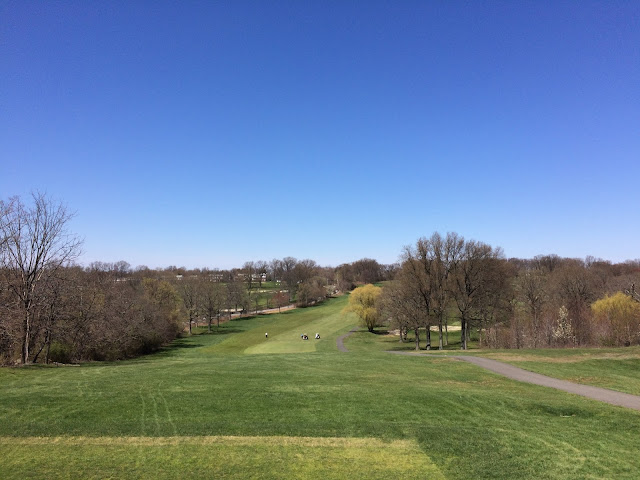 To my surprise LaTourette is an elevation course. Of all the second-hand descriptions I'd heard of this place over the years, nobody ever really mentioned that. Then again people are clods I guess. Turns out this is a nicely hilly, topographically diverse piece of land. Feel like I'm in the New Jersey Appalachians or something. Definitely not crappy New York City. 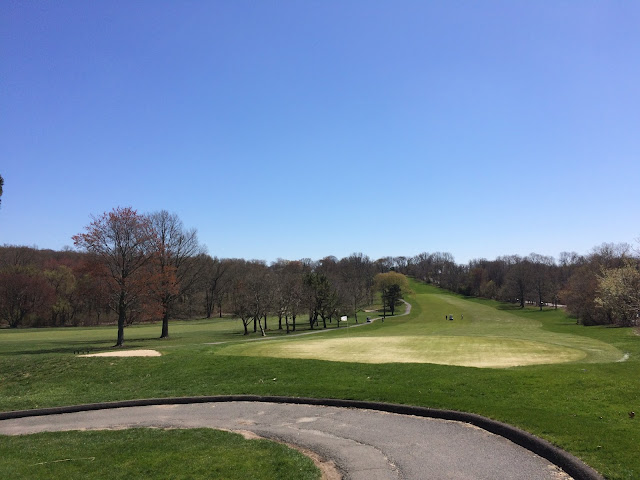 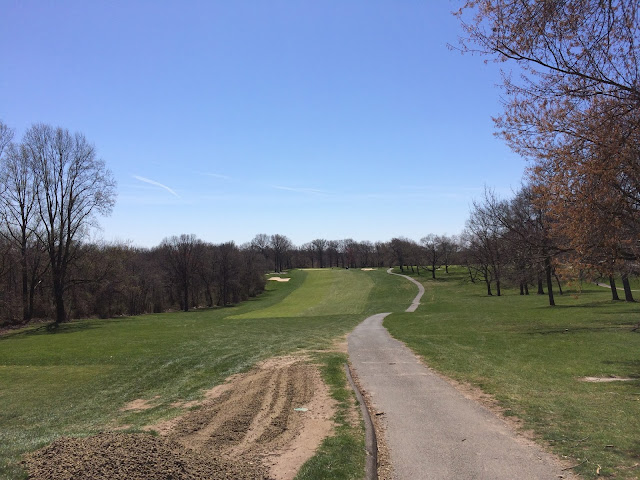 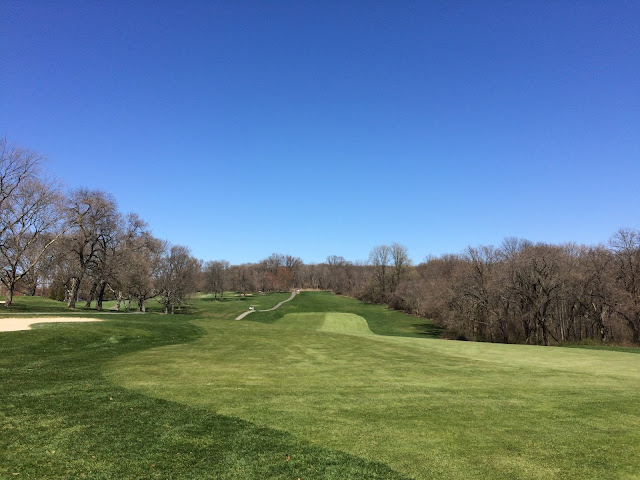 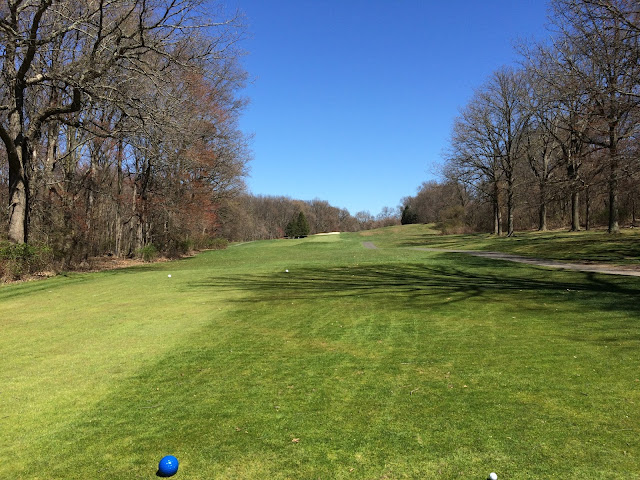 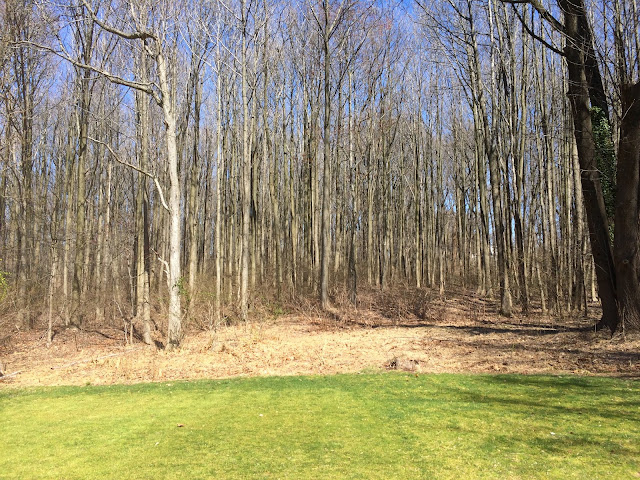 These are some witchy-lookin' woods. I sure as hell wouldn't want to be caught out here during super-twilight on some cold December eve. 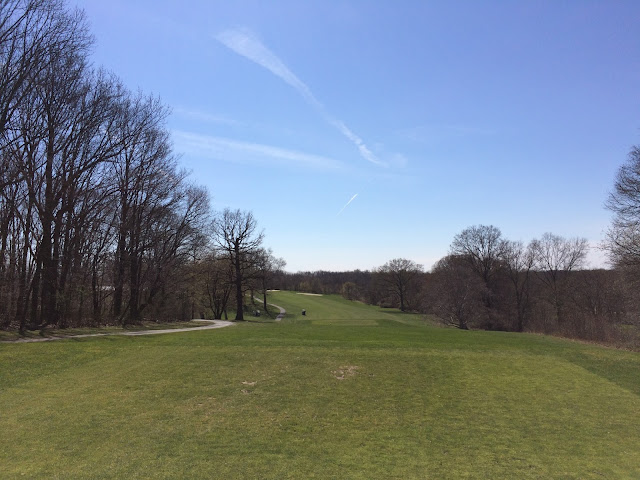 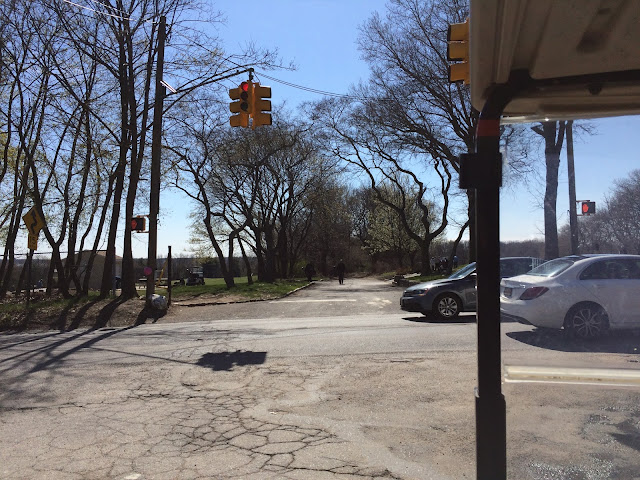 Playing the back nine involves crossing a busy avenue and becoming an actual motorist for a brief stretch. Obeying traffic signals and laws is a must. 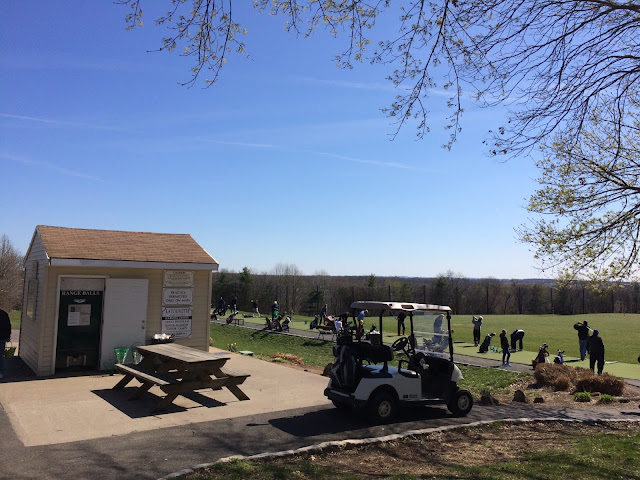 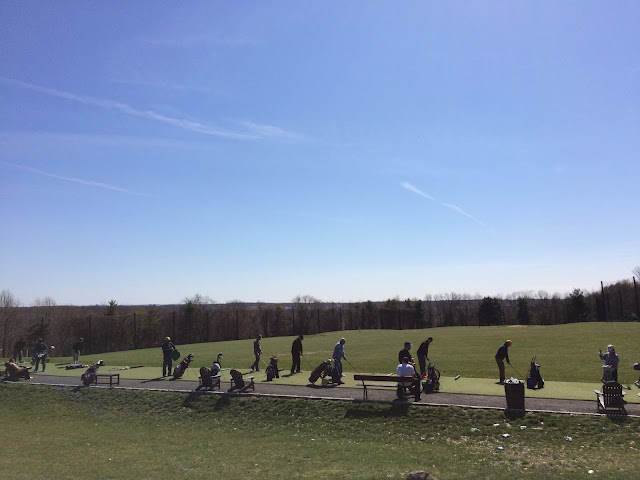 Holy crap, the fabled LaTourette driving range. There are several ranges in the city. And there are plenty of courses as I said. But golf course with driving range on the same property? Almost unthinkable. There's one at Marine Park but it's half-sized. This on the other hand is the stuff muni golf dreams are made of. The next time I play here I am going to hit some balls beforehand. It is going to be awesome. 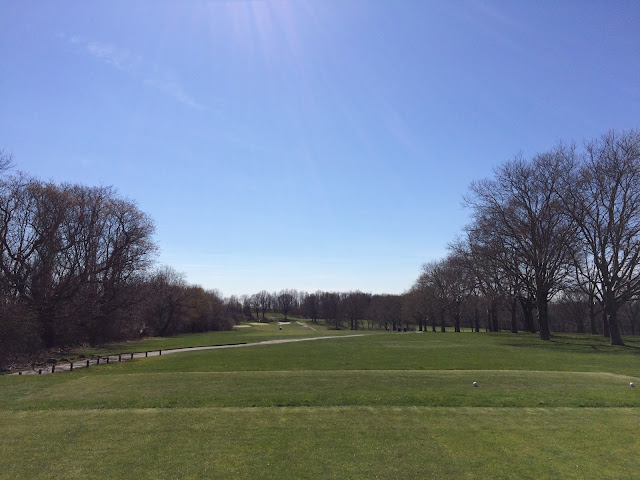 A gaping wide fairway to start the back nine. 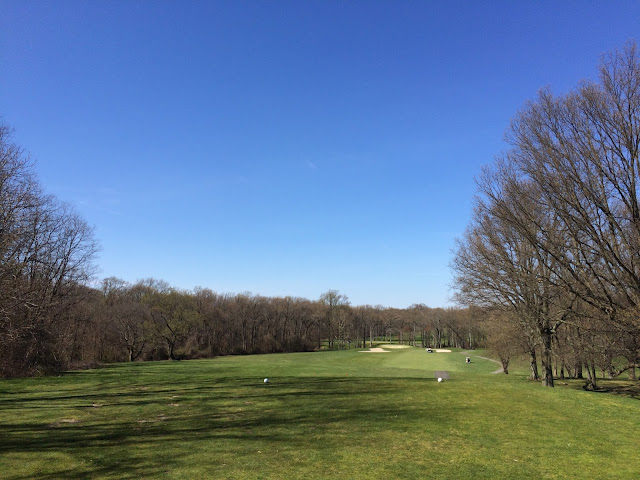 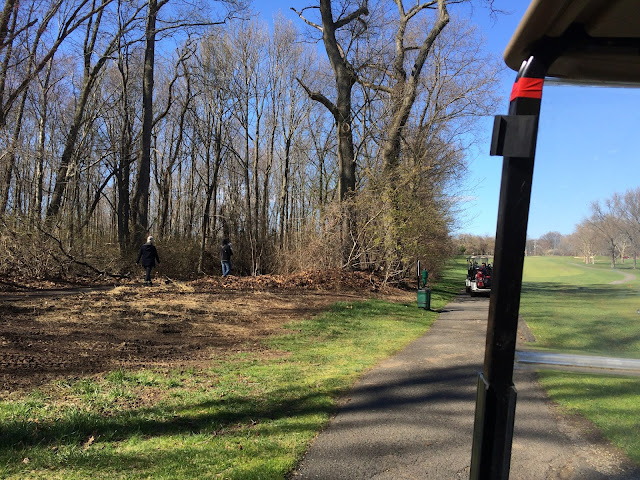 Would you look at this, hiking is allowed right alongside the golf course. I don't like it. I am a segregationist. 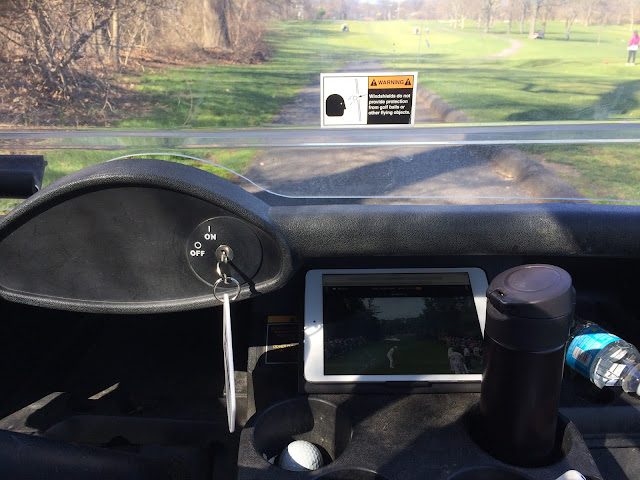 Today's Masters Sunday. In past ages, our parents and grandparents would be forced to choose between their loves for TV golf and real-life golf. In our modern times, such a pitiful dilemma no longer exists. Now, enjoy both. At the same time. No choice. It is a mandate from God practically. If you are not playing golf and enjoying TV coverage of professional major championship golf simultaneously, I hate to break this to you but you are not making the most of your time on this earth. 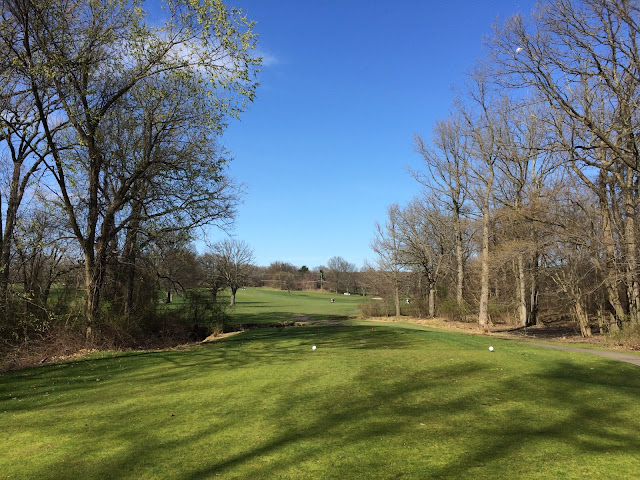 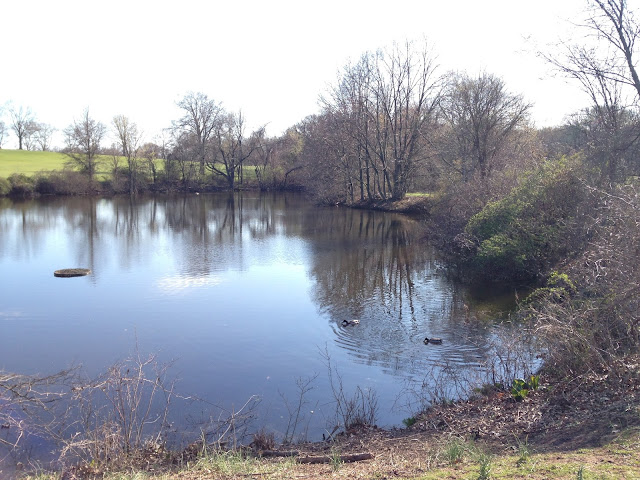 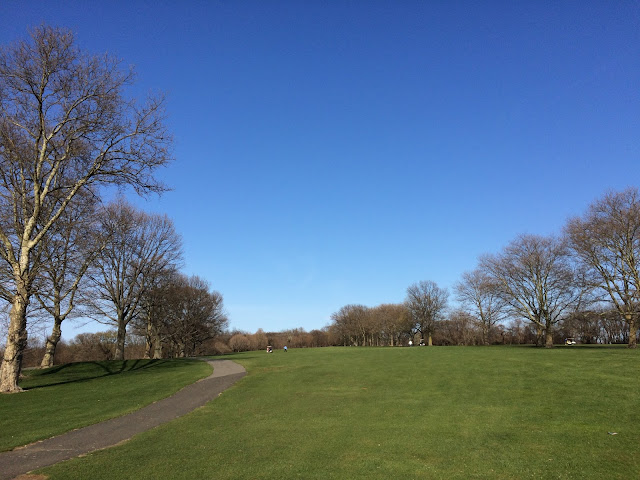 The verdict is in: it's a fun course. I am as surprised as you are. Sure there is a slight whiff of a douche vibe, and I'm pretty certain that slow play is a regular feature here but come on, it's a city course; that's part of the deal. But I can say that I'm already looking forward to taking on it again. After one playing it strikes me as a lively challenge. Lots of different looks. A lot of diversity in elevation. Weird-ass undulating greens that hark back to pre-Stimpmeter eras. Looking over the scorecard, I can easily recall the look of just about every hole. Among the criteria of golf-course-evaluation, that ranks pretty high up there. What good is any golf course if, when replayed in your mind's eye, is little more than a mishmash of turf and trees?

From the flat marshlands of Marine Park, to the dense woods of Split Rock in the Bronx, to the dramatic hills and valleys of LaTourette, the NYC golf landscape is a lot richer than I had expected when I set out on this thing. Nearing the end of this tour, I finally start to appreciate our blessings. Figures. Now that only one stop remains (South Shore, in deep, deep Staten Island) I'm a little bummed. Soon there will be no more mystery. I will have played every last hole of golf in the city, the entire golfscape of New York City explored and mapped out in my mind. Then what?
Posted by Legitimate Golf at 5:38 PM