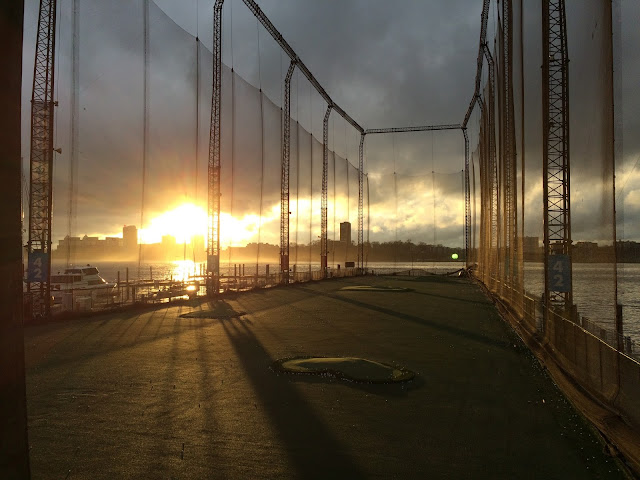 Confession time. I haven't played a round of golf since Masters Sunday.

What's going on man, are you okay?

I am fine, I think. Outwardly at least. Physical and mental health would probably be deemed sound by a health-care professional.

But why no golf, why?

By now I think this has become a pattern. Winter is the peak season, and the onset of spring is now an annual funk period, in which I struggle to assimilate back into the world of normal temperate golf. Slow golf. Casual golf. Populist golf. Polo shirts 'n' khaki shorts golf. Each year the assimilation process seems more difficult, and this time around it feels like I'm going to just hibernate out the rest of the season. Summer will bring its own set of problems, but given the extreme hot weather, it's not nearly as frustrating. There are opportunities to play when the heat gets out of control. Spring golf on the other hand makes me feel hemmed in, on all sides, by the multifarious forces of slow play, crowded courses, spotty conditions and weather that on the surface looks nice but is actually pretty nasty to play golf in. (e.g. jet engine wind gusts which are pretty much a fixture around here this time of year).

This spring funk is hitting pretty hard on account of the especially joyous, bountiful winter of golf we just had here in the tri-state. I golfed the winter away.

I won't lie. My golf dream is an Endless Winter. I am not trying to be facetious or trying to make an ironic statement in an attempt to get more clicks on my stupid links. These are the facts, Jack. My scorekeeping page tells the whole story. Over the last three years, I am averaging more golf per month in the November-Feb period than in the warm part of the year. In this bizarro golf universe, winter is where it's at, Matt.

Anyways, as weird and stifling and ultimately unsatisfying as it can be, turns out that abstinence is a good thing. Feeling a little unsure about my direction, I went and sought some advice on the internet. The benefits of abstinence are well-documented. You avoid the risk of contracting an illness. You avoid the risk of emotional hurt and heartbreak. You learn self-control. Your personal relationships are enhanced, and you can make deeper, more meaningful connections with people. Or something.

Abstinence, they say, can help you to understand yourself better, and also to respect yourself better. I get that! How many times have you walked off a golf course feeling ashamed? Who needs that?

Another benefit of abstinence is a clear conscience. No longer have to hide anything from your family and friends. Amen to that! No more lying about where you've been, why you didn't answer your phone for the last four hours, etc.

In a spiritual sense, abstinence purifies the soul. Frees you from the self-perpetuating cycles of lust and desire. The endless chasing. Yes I totally get that.

There are even more benefits. Actual studies actually suggest a negative correlation between abstinence and undesirable states like depression and poverty. Not kidding around, this stuff is real. There is also a strong evidence suggesting that those who abstain are likely to get better grades. Now that's no use to most of us but the point stands: abstinence is wholesome and while far from being the only choice in life, it's never a bad one. In fact I had a hard time even finding anything credible on the internet saying that abstinence is bad.

Okay, so maybe most of this propaganda information pertains to a different kind of abstinence. But the way I see it the two kinds are more similar than they are different. Golf inflames the passions. It drives people to extremes. Tears families apart. And so on. Nevertheless let's get serious here for a second. Abstinence from golf yields some indisputably real benefits: save money, time, golf balls. Wear and tear on the grips, gloves, shoes, you name it. You know who else benefits from that? Your mother. Earth that is.

Still, all the soul purification, relationship improvement, conscience clearing, consumption reducing in the world is irrelevant if one has simply lost desire. Unfortunately that's kind of where I am right now. As much as I love golf the game on a hypothetical level, I can't stand to look at it right now. The mere thought of all the smiling faces gathered at the course, laughing and joking, sweating through polo shirts, taking too long to hit a shot, carts zooming around in every which direction… it puts a scowl on my face.

So, let's just keep riding this abstinence train until either soul-crushing boredom sets in, or the accumulated pressure from too much abstinence threatens to blow up something. In the meantime I can always pound away at the driving range. Because come on, everyone knows you can't have abstinence without self-gratification.
Posted by Legitimate Golf at 3:24 PM