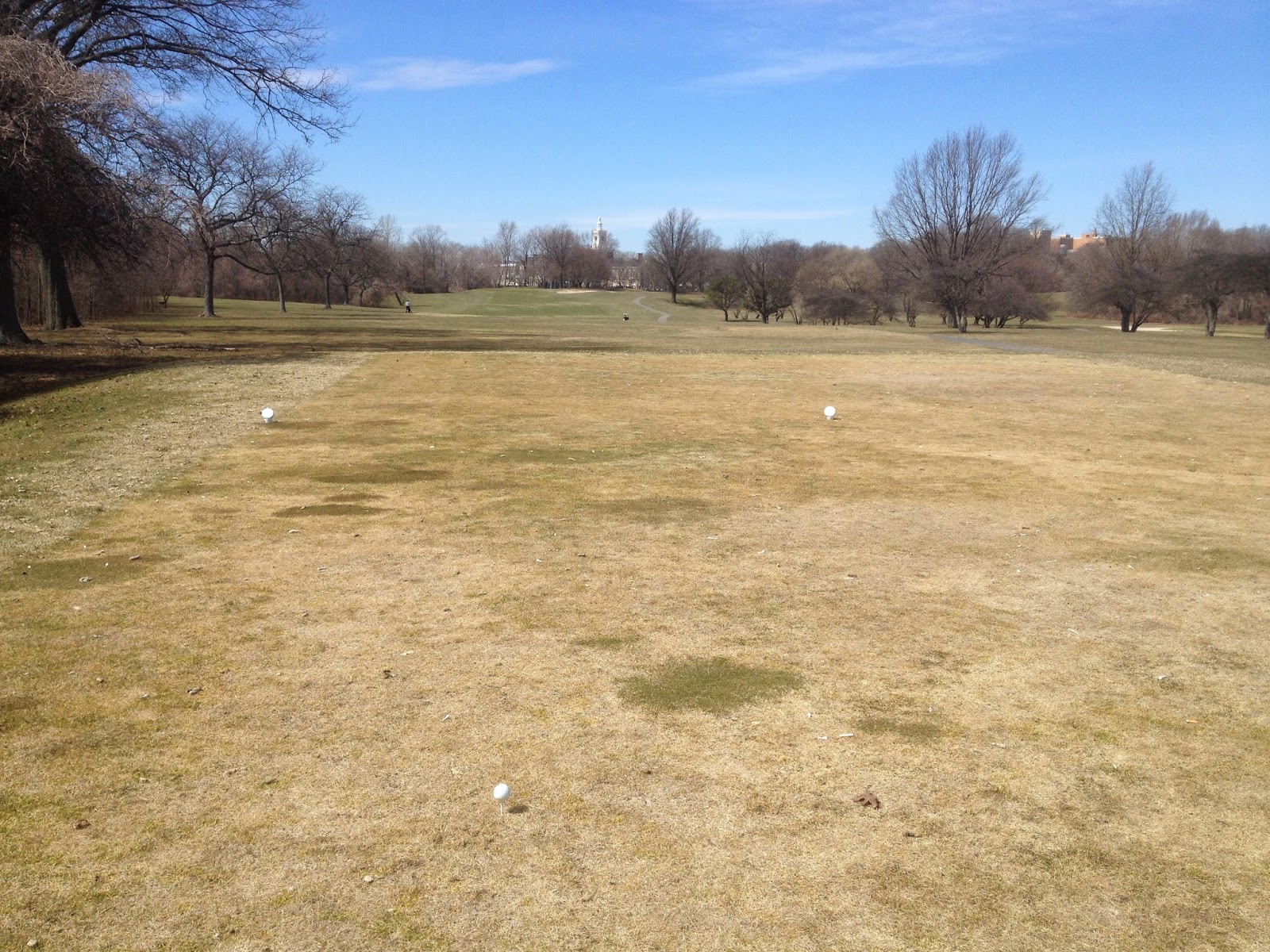 Things are very slowly creeping back towards normal. I'm no longer eyeballing the weather reports with a bug-eyed intensity. We seem to be in the clear as far as any major freezing weather events are concerned; still, I'm not ready to put away my winter jacket just yet. 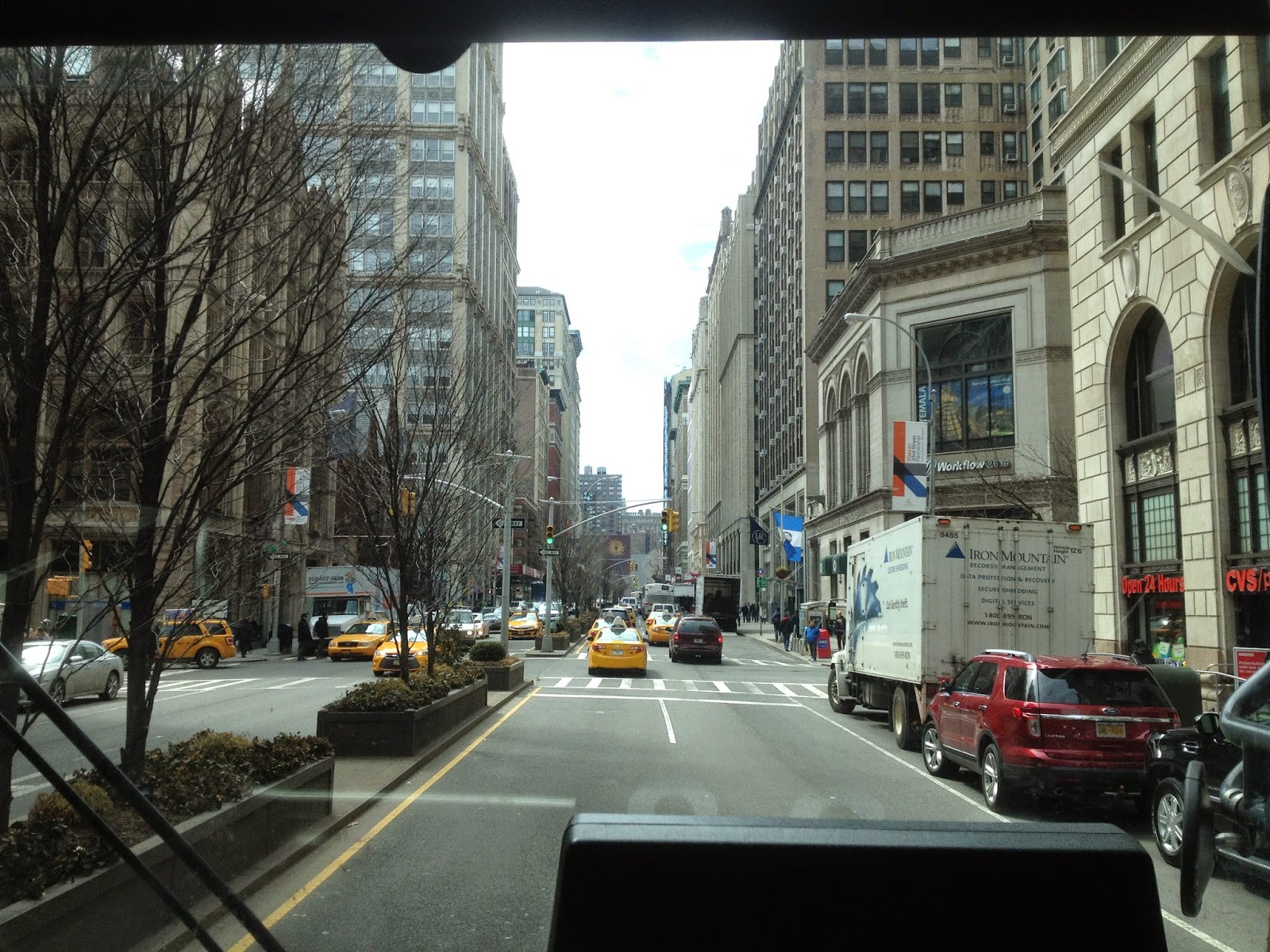 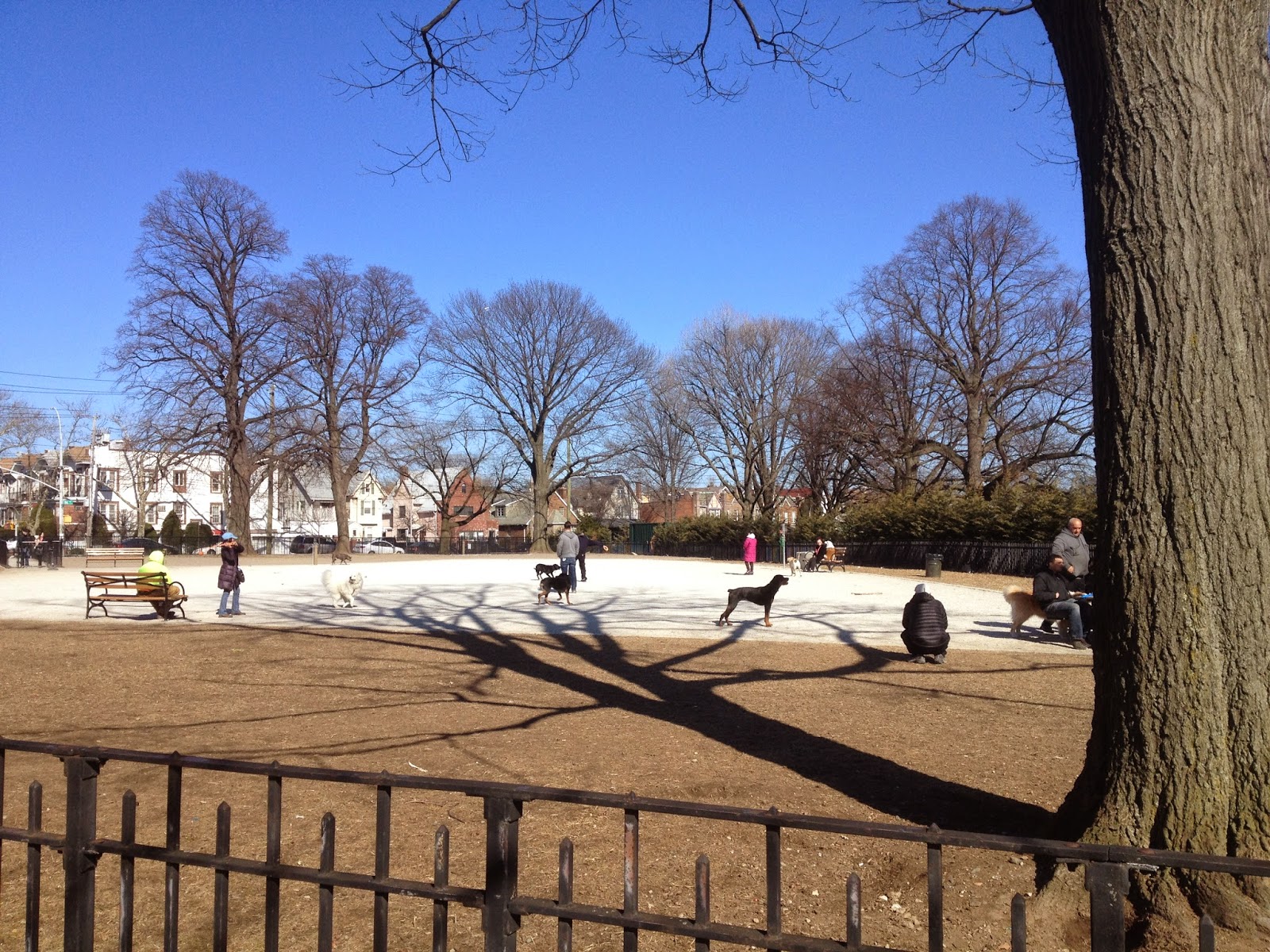 Part of the whole getting-back-to-normal process for me means playing golf in Brooklyn again, something I haven't done in over two months. I got to the course expecting to find rates jacked up for yet another new season, just like it has every single year before it. But something really weird happened inside the pro shop.

It was pretty empty, I walked up and placed my order: single, walking. The guy behind the counter was the shop manager; he asked for my name so he could look it up in the computer. Seeing that I was a regular customer, he then said, "Legit, I want to tell you about a few things." He went on to describe the weekday special that I was about to receive: green fee, plus cart, plus two beverages of my choice--even beer, even imported beer--all for one low price.

But wait--there was more. He went on to tell me about a rewards points program, and how I need to make sure the goof-offs working behind the counter ring up those points every time I spend money there. The rest was kind of a blur, but I heard all this stuff about free parking, free reservation fees, more beverage-included deals, lunch-included deals--wow.

I thought he was going to come around the counter, put his arm around and invite me to his house for dinner. I've seen this manager here before, he's not exactly new, but something has changed at this golf course that's for sure. Maybe the guy had a recent near-death experience or something and realized that each new day is a gift. More realistically (but somehow less plausibly), management decided to get proactive about stimulating business, and repeat business. Maybe I was not the only one who'd gotten fed up with this place.

Now I like to kid around and exaggerate for effect as much the next guy, but I am stonefaced serious when I tell you that this was the first time in the nine-plus years I've been coming here that I've ever felt remotely like a valued customer. Or any kind of a customer--there were some really bad times back in the mid '00s where the staff and management were evil incarnate. 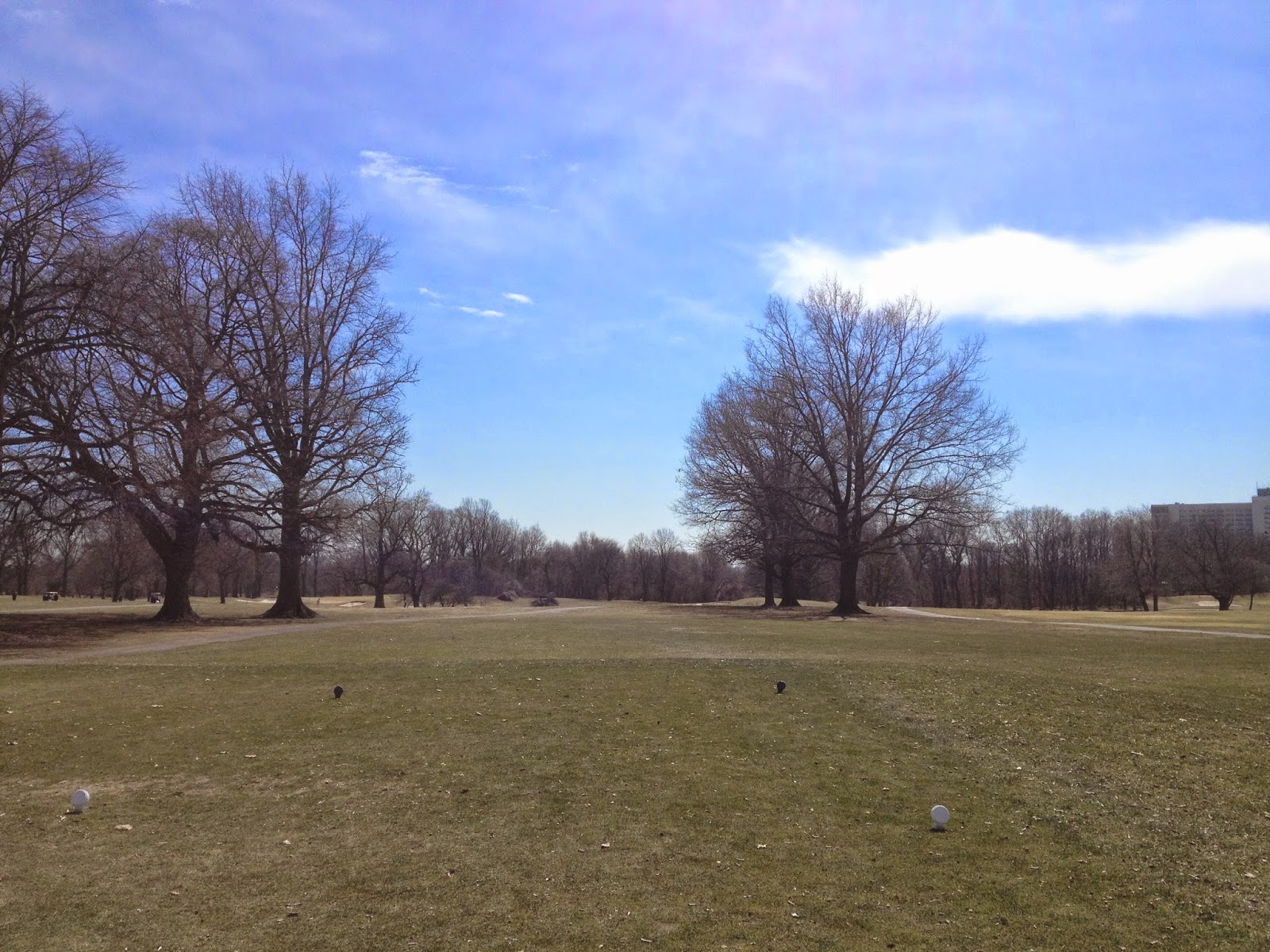 Walking out to the first tee I pondered this new landscape of golf bargains now laid out before me. A couple seasons ago I started to find better deals and a lower douche factor in Staten Island. But now, it might be time to come back, to reap the bountiful tee-time deals in Brooklyn. 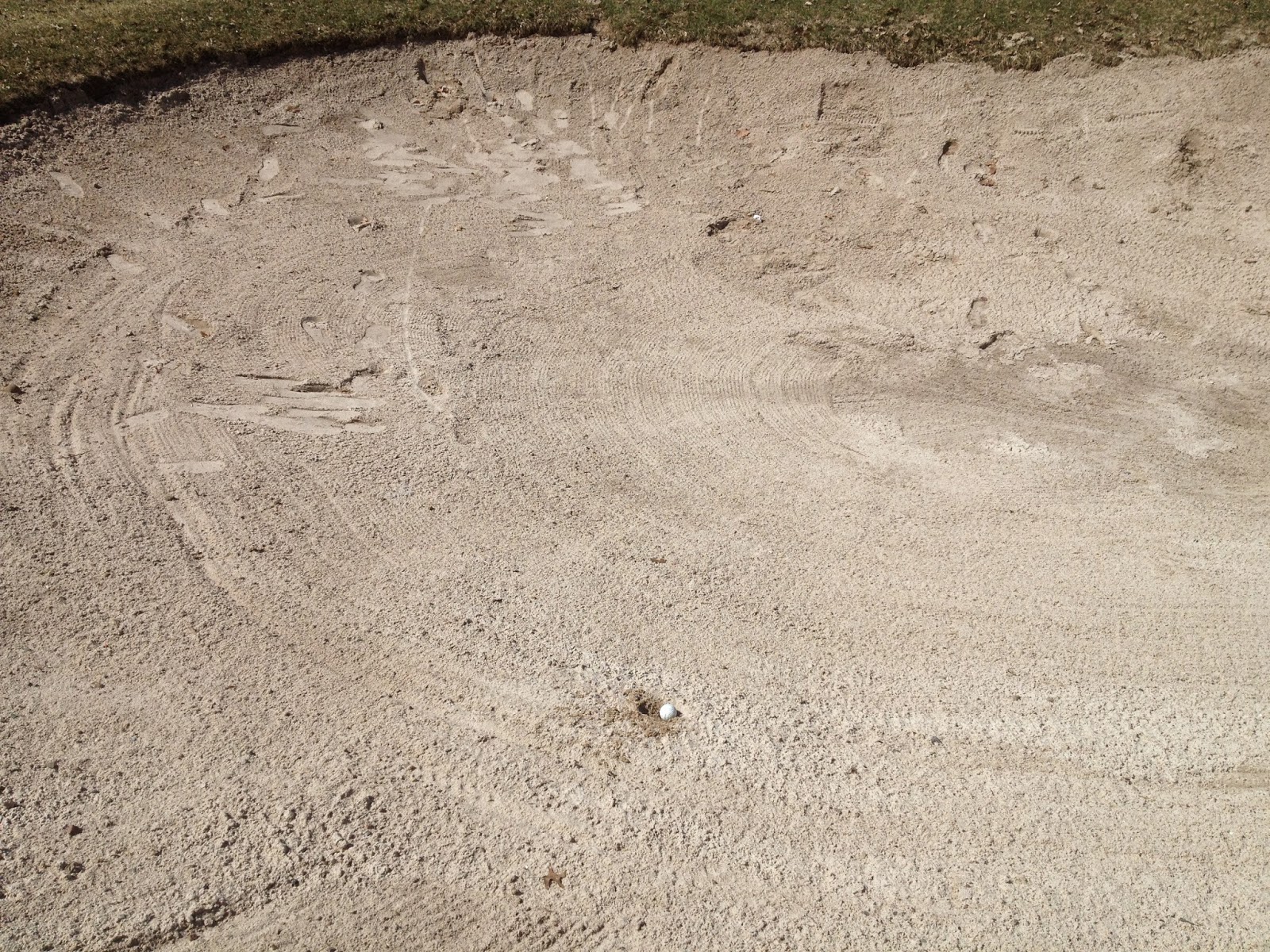 Well that's a fine how do you do. This downhill buried lie is a fine representation of how my round began: shitty. On the next hole I lost a tee shot in broad daylight. Then on the 7th hole while I was in the midst of four-putting on the green, I thought of a comment left on my last post, by someone known as "bkuehn", about how I used to play a lot better than I have been lately. I won't lie, it haunted me. It rang painfully true--my scores really do suck compared to about three or four years ago. 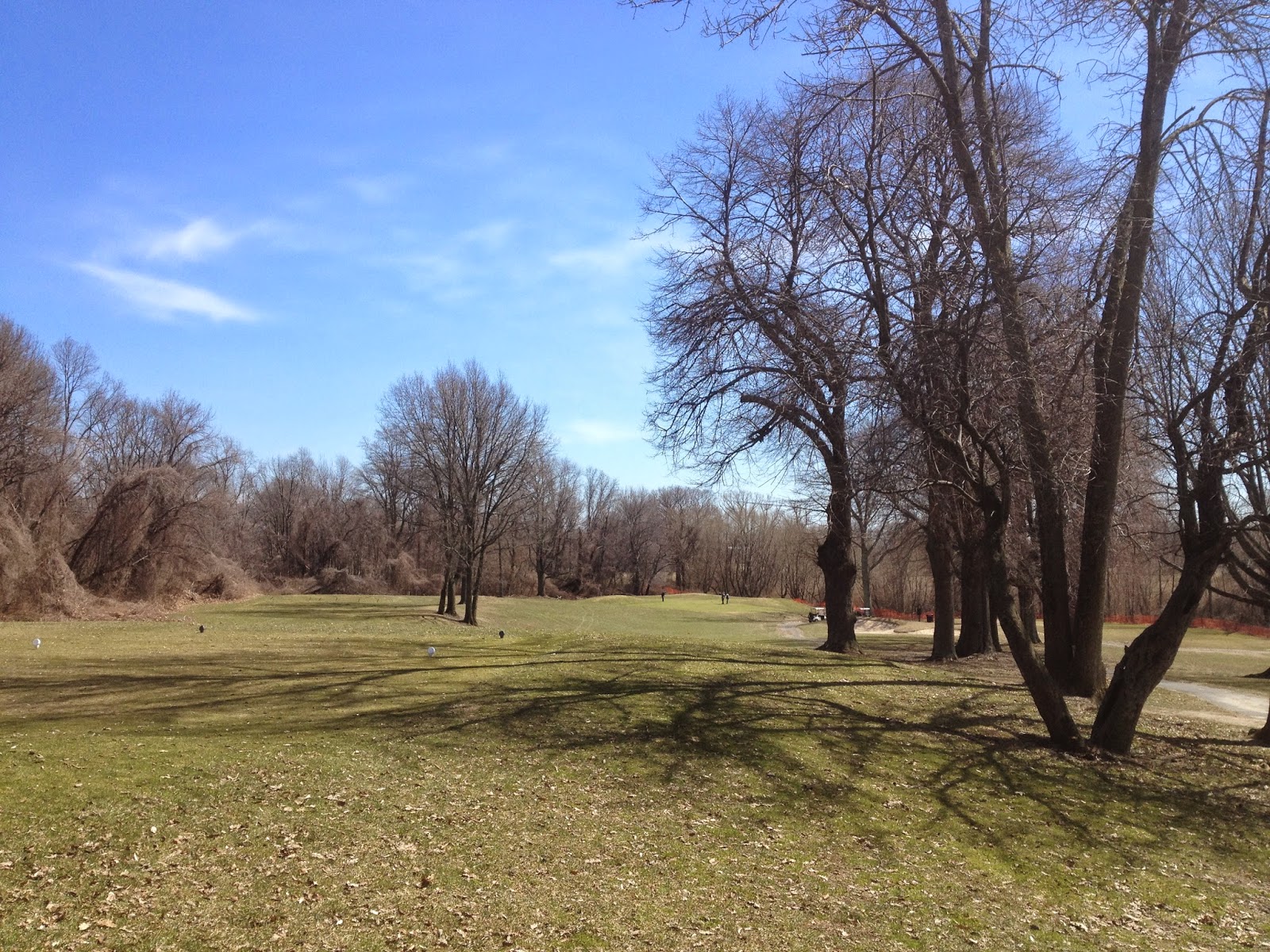 Now this was a potentially depressing, emotionally crippling thought, but I remembered that earlier in the year I'd made a public commitment to stop giving shits about my scores and to just go out and try to make the proper shots and accept whatever the sum total happens to be at the end. You think I'm kidding around here. No way. That said it will not be easy to let go. After years of sweating and cursing and worrying about better scores, taking on a new mental outlook is going to take some time, and maybe a few tears.

Once I remembered that I started to feel a little better and even managed to play a little bit of golf on the back nine. On the second to last hole I struck a pure 5-wood that made me feel like anything's possible. Not that it was enough to save my total score from spilling into the 90s. But hey at least I got a deal on the round, some rewards points, and a can of imported beer.
Posted by Legitimate Golf at 11:57 AM