Scenes From a Rough Spring 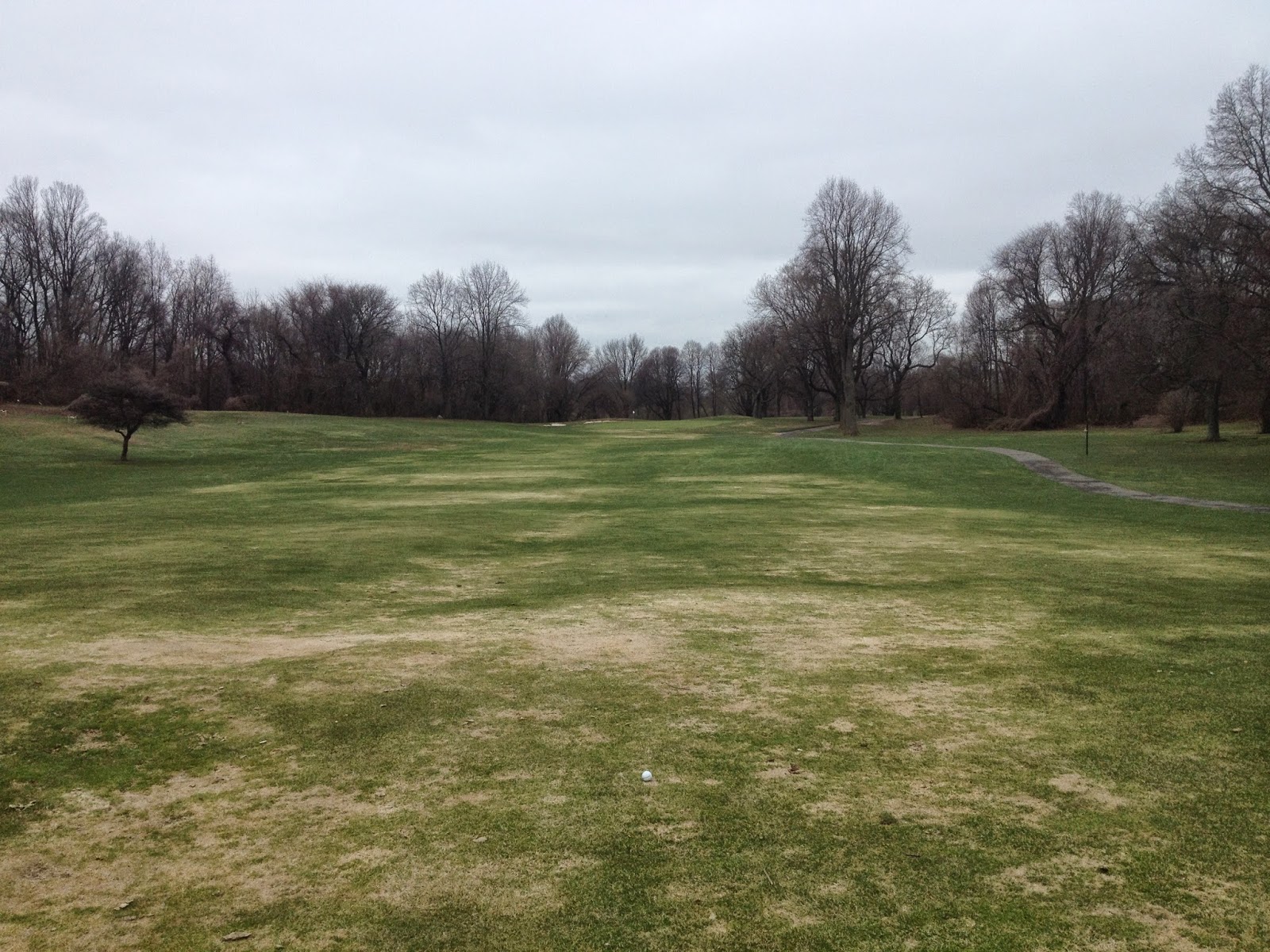 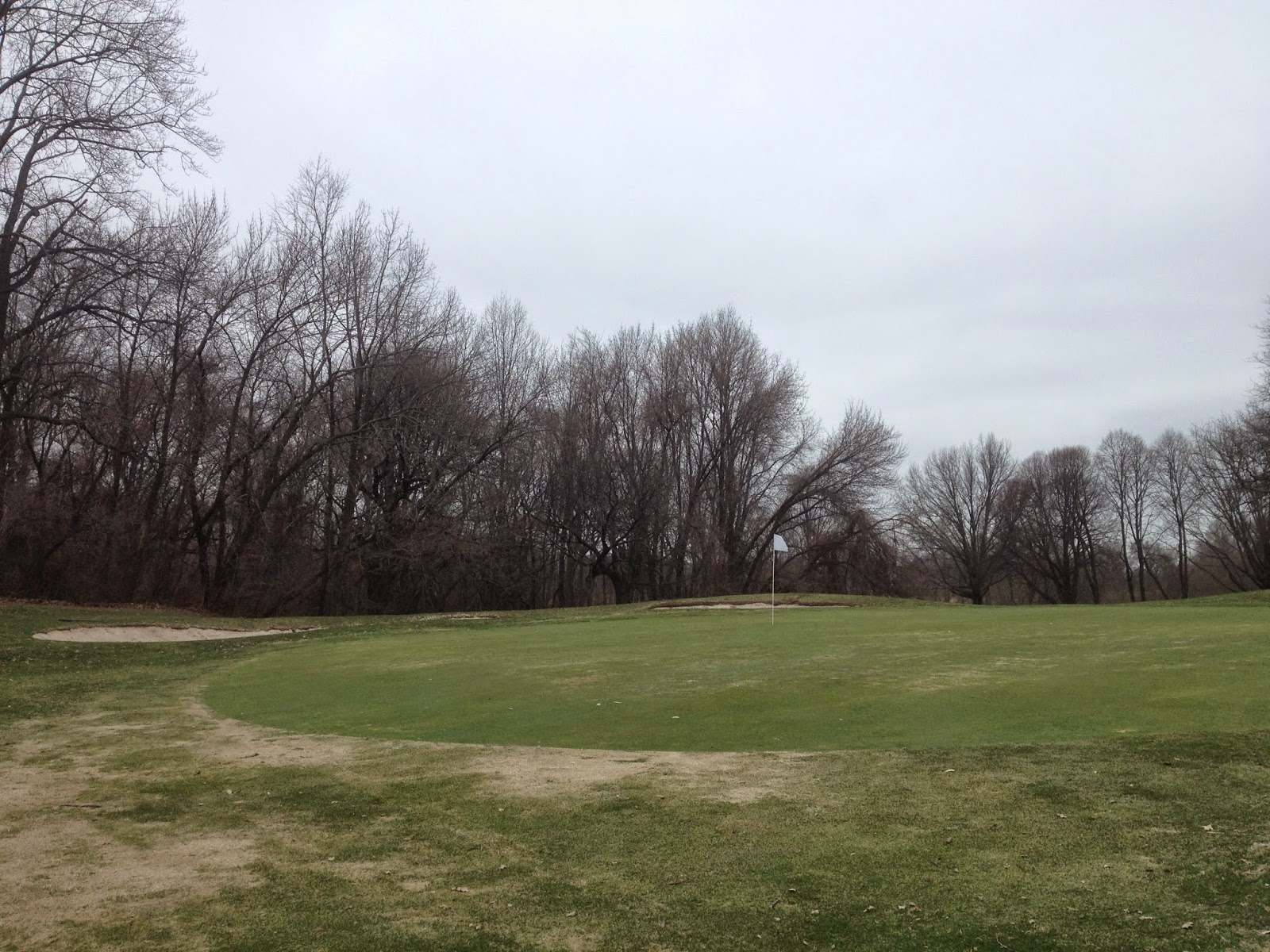 These days the daily temperature forecasts are routinely way too optimistic. They'll claim that tomorrow's high is like 67. Then tomorrow comes and you try to go outside with a light jacket on and bam--you get hit in the face by a gust and now you're chilly and uncomfortable. Check the current temp and it reads 49. Gah! 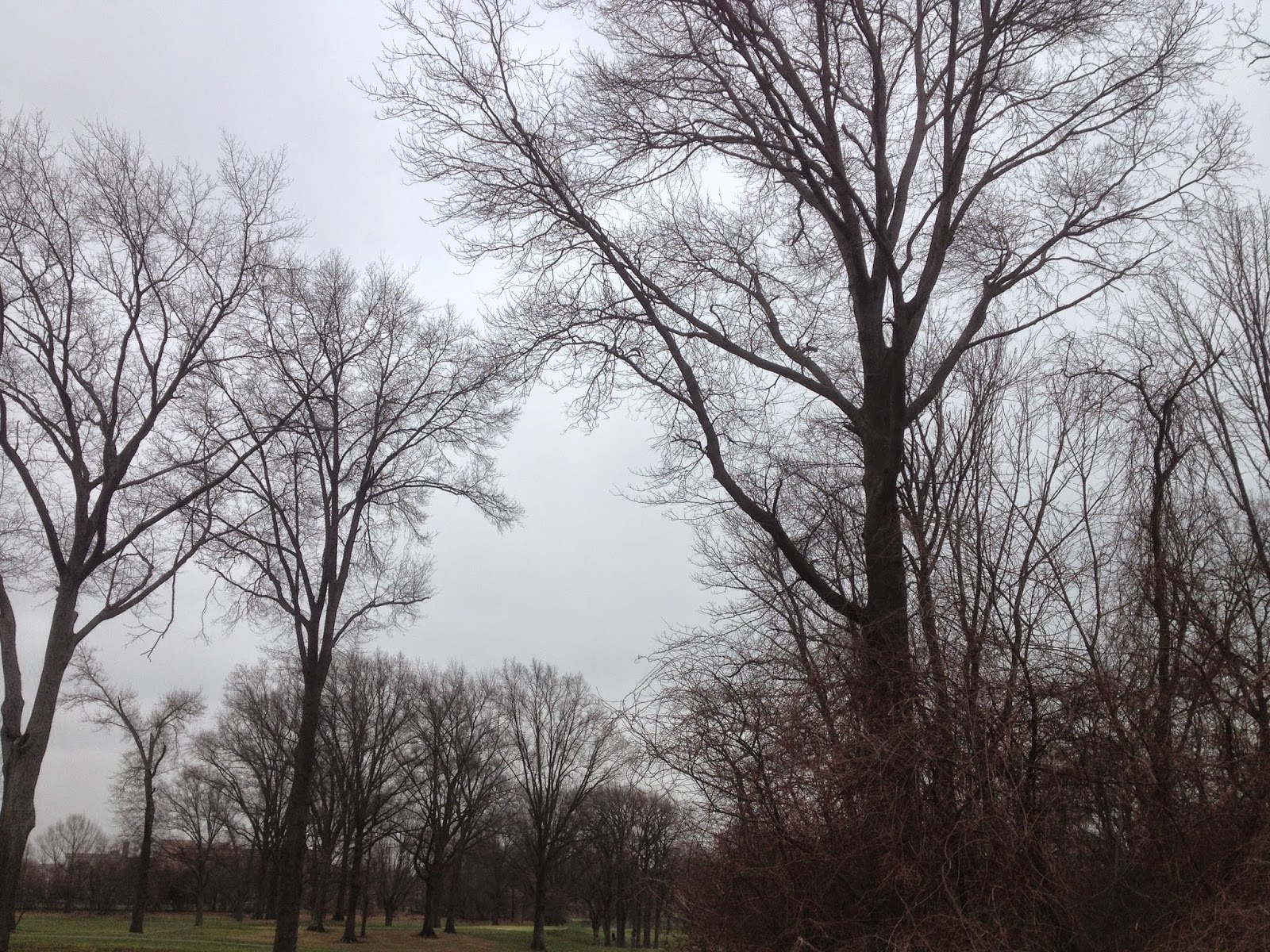 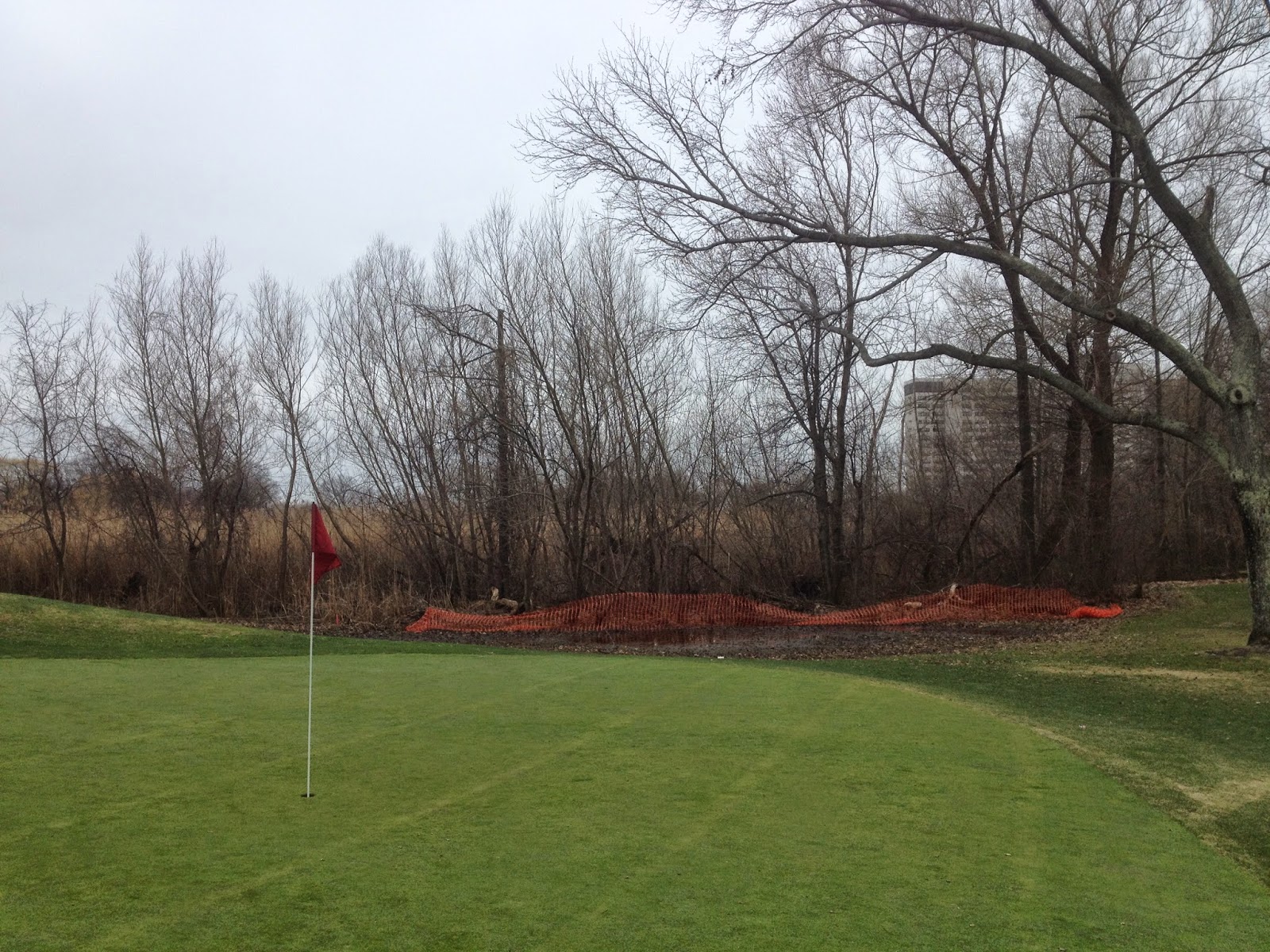 The native flora doesn't seem to realize it is spring. Trees are still naked and barren, not a shoot of green to be seen yet. Frankly I am surprised that nature hasn't come around by now. I mean come on trees, it was a tough season for all of us, but the worst is over now and it's time to move forward--Jesus Christ, even I have accepted that by now! 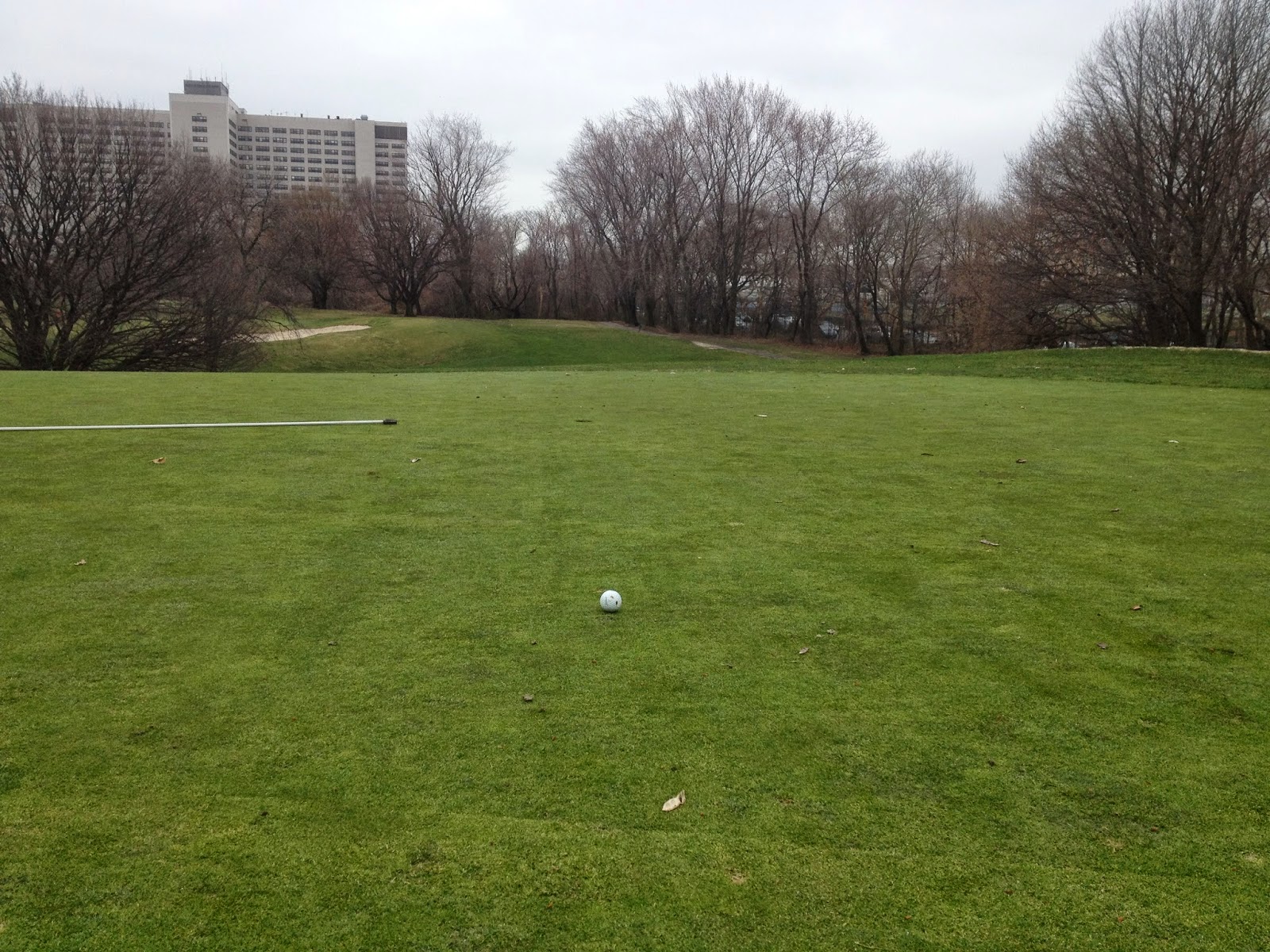 Now I understand why Dyker Beach was being so nice to me all of a sudden, offering me discount deals and rewards points and acting all like my business is valued and shit. The course is ravaged, gangbanged by winter basically. I've never seen anything like it. The greens are futility zones; putts spend a lot of time flying through the air. 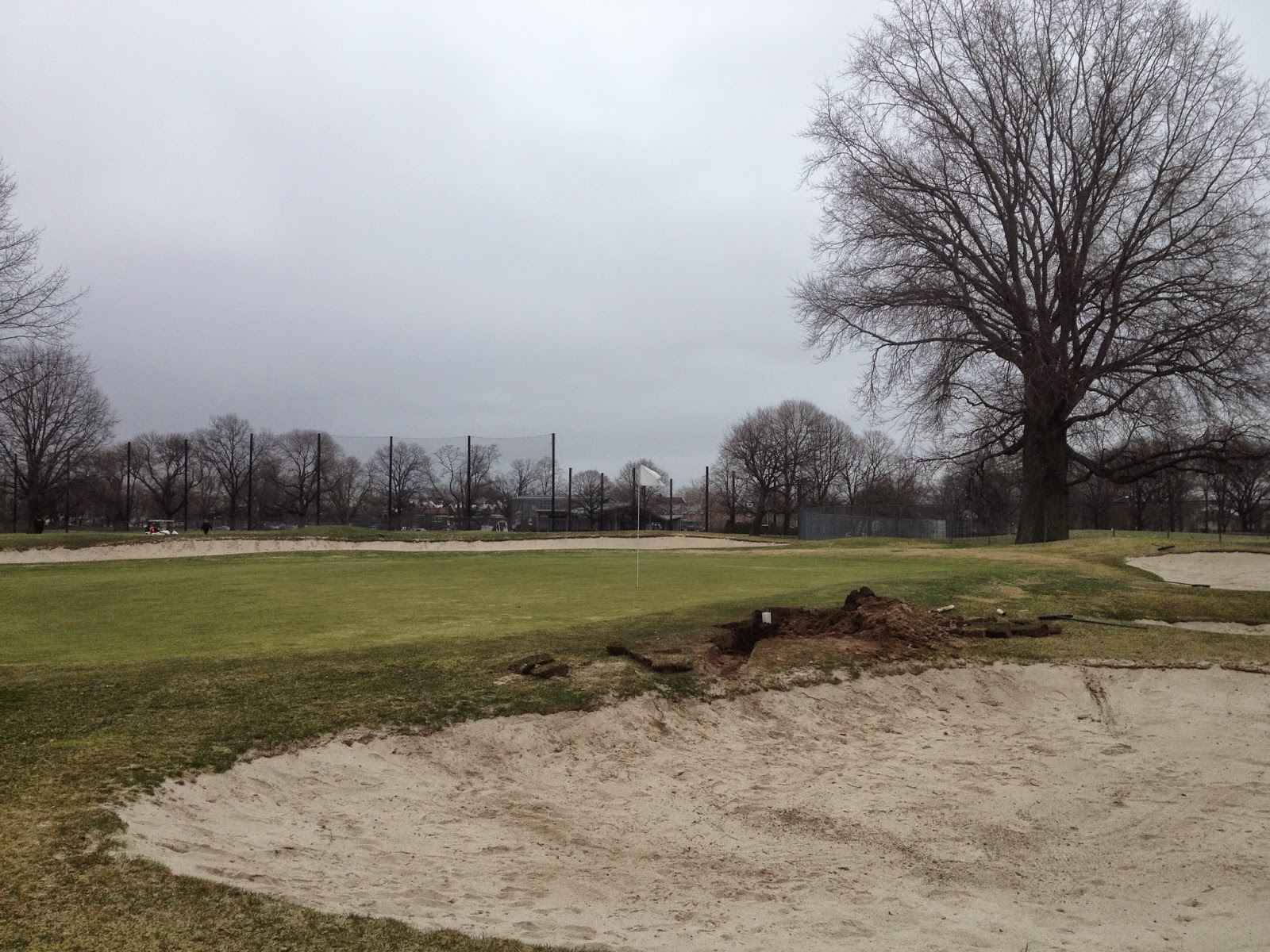 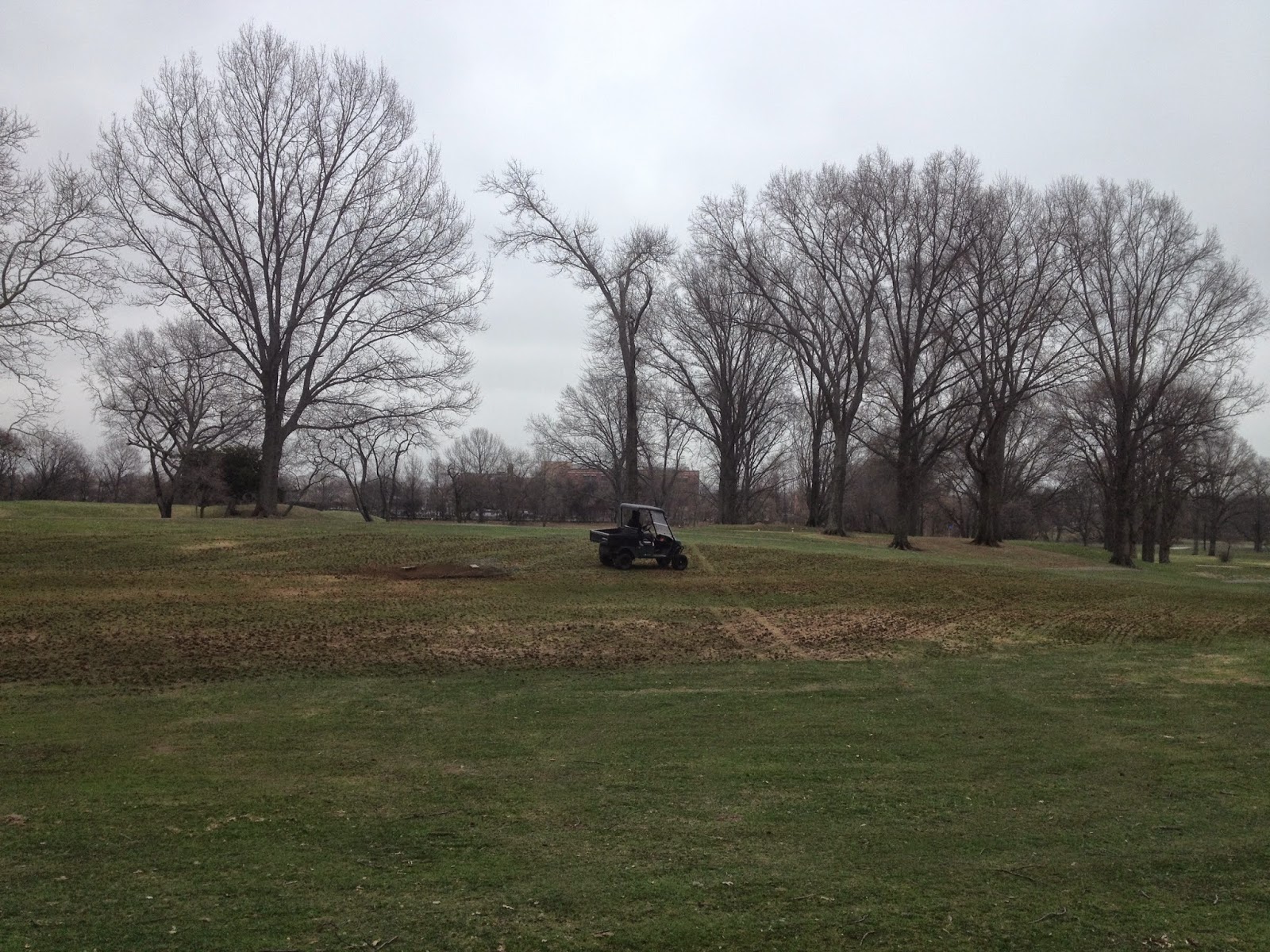 The grounds crew is busy all over the course trying to get the place in shape. These are some serious ground-under-heavy-repair conditions; some places the turf looks like a war zone. But I just went ahead and played the ball down. It's all I know how to  do at this point. You don't just switch it off. 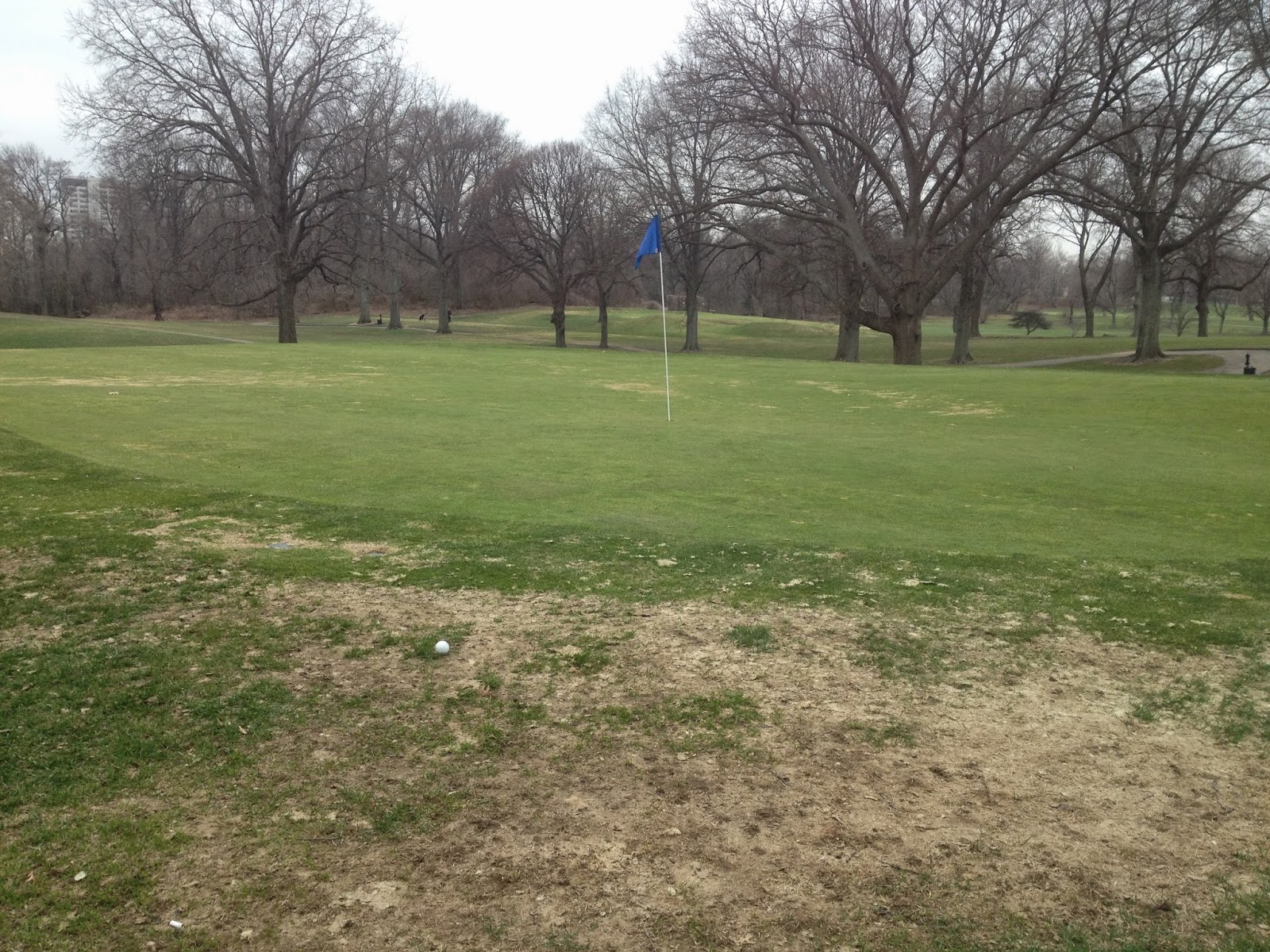 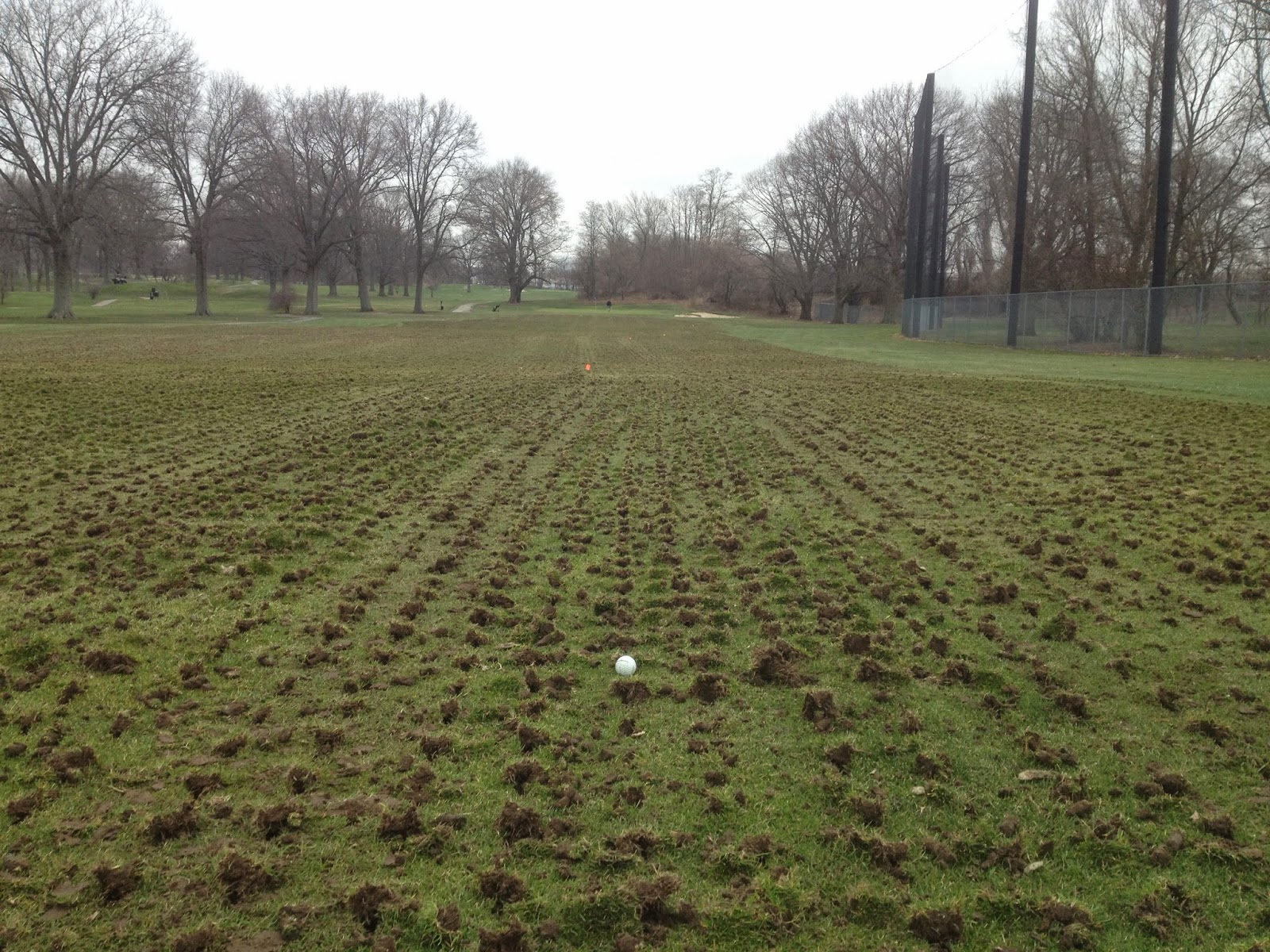 It was all good fun, until the danger of playing it as it lay caught up to me, and I had a sextuple bogey misadventure (with no penalties--I hit the ball ten times) in the middle of the back nine.

But that's okay. I shot a 91 on the day, and that's okay as well. If not for that sextuple, I'm right in there, right? 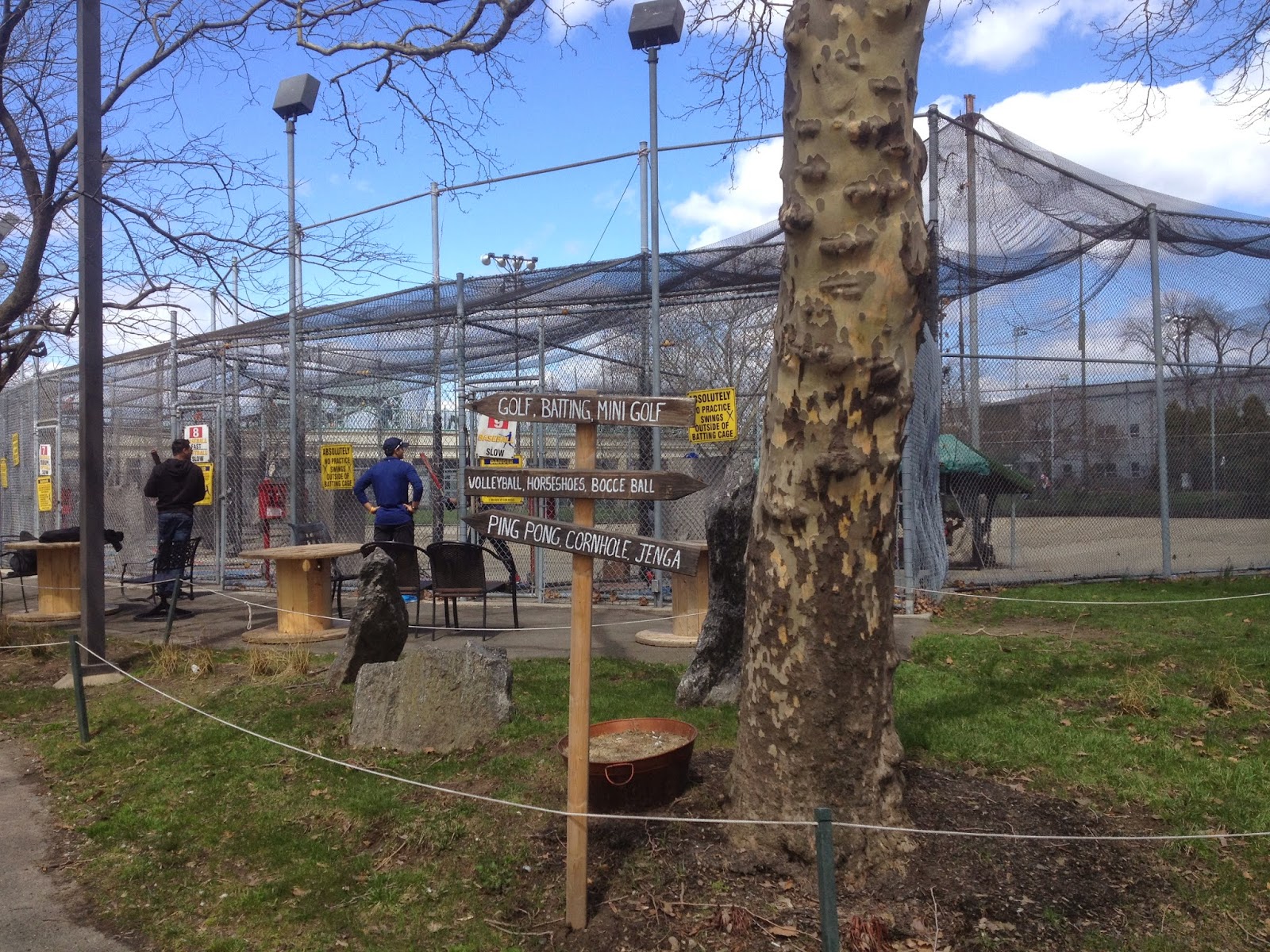 Masters weekend I went out to Randall's Island to work on the swing. High wind advisory today. Could hardly hear yourself think with so much whooshing. 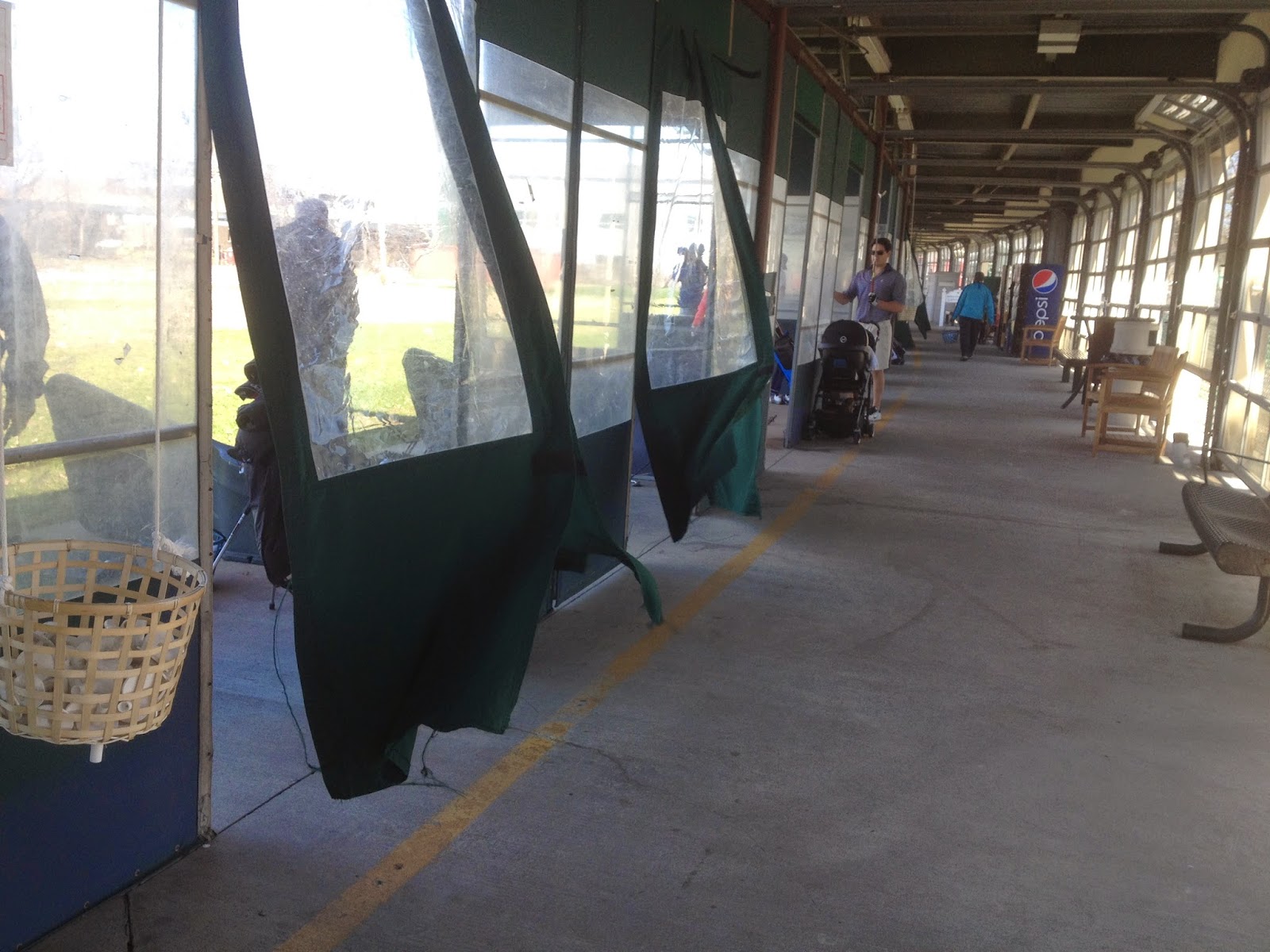 The wind was so rude and so in-your-face that customers were dropping like flies, getting fed up and leaving unfinished buckets of balls all up and down the hitting line.

It's probably not the best idea to practice into a head-on, near gale-force wind, but I am eager to work on some things, so I just try to make solid contact and get the ball started on a decent line and not worry about the rest. 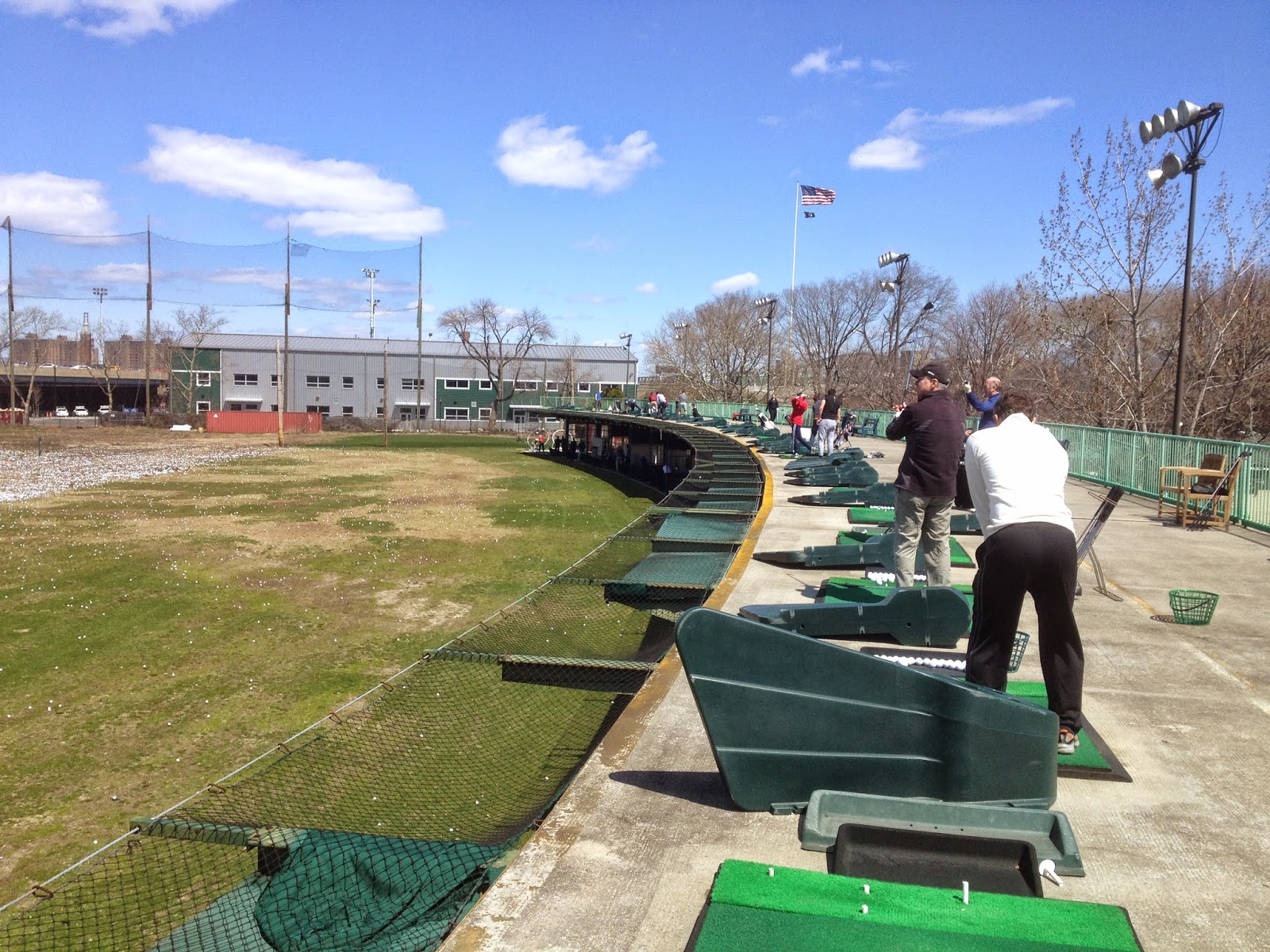 The hollow plastic partitions are no match for these winds. 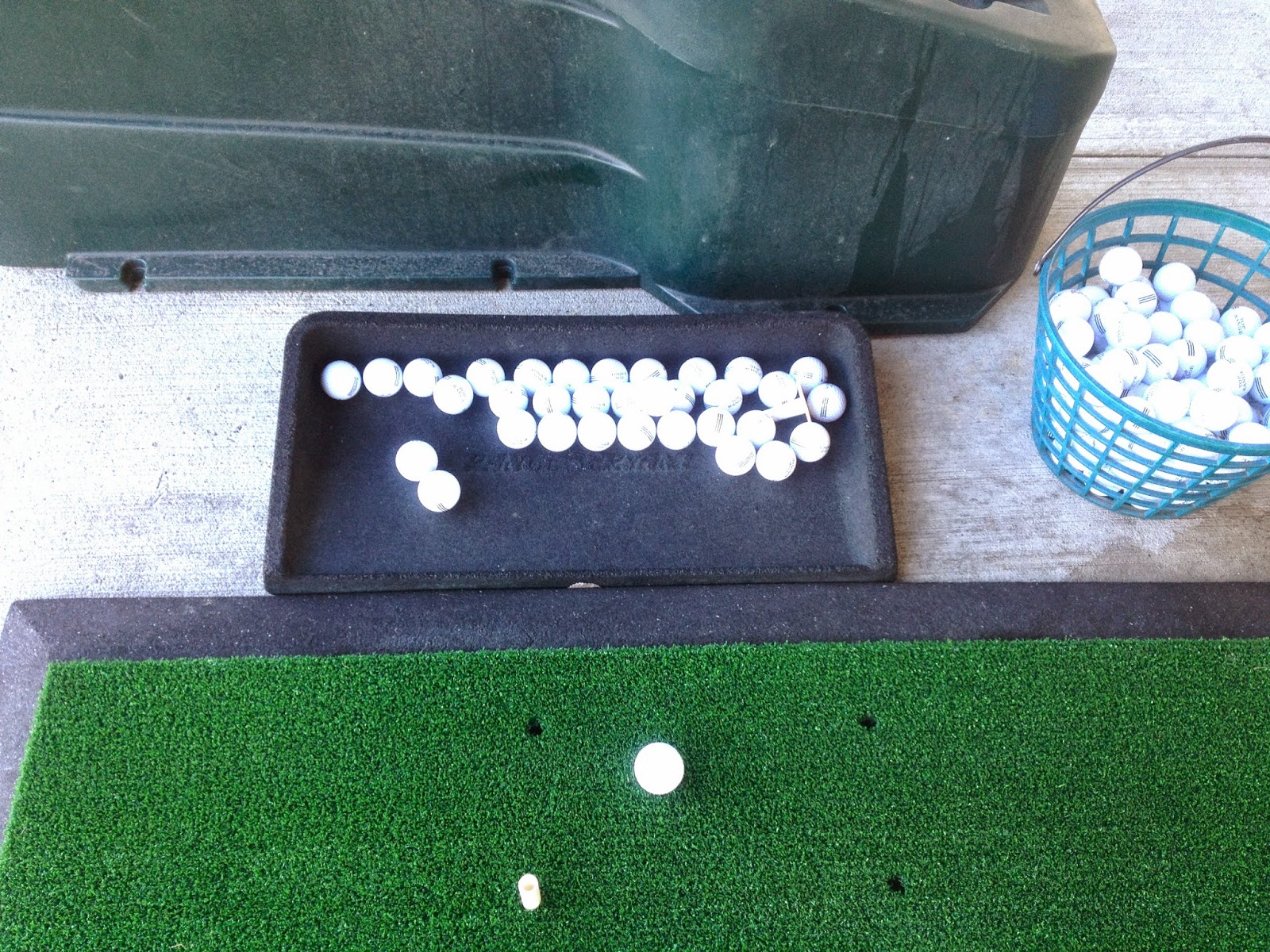 Since I was last here, old Randall has freshened things up a little bit. Previously this place used some of the crappiest, most beat up balls imaginable but thank God, they've finally been replaced, with new ones at that. 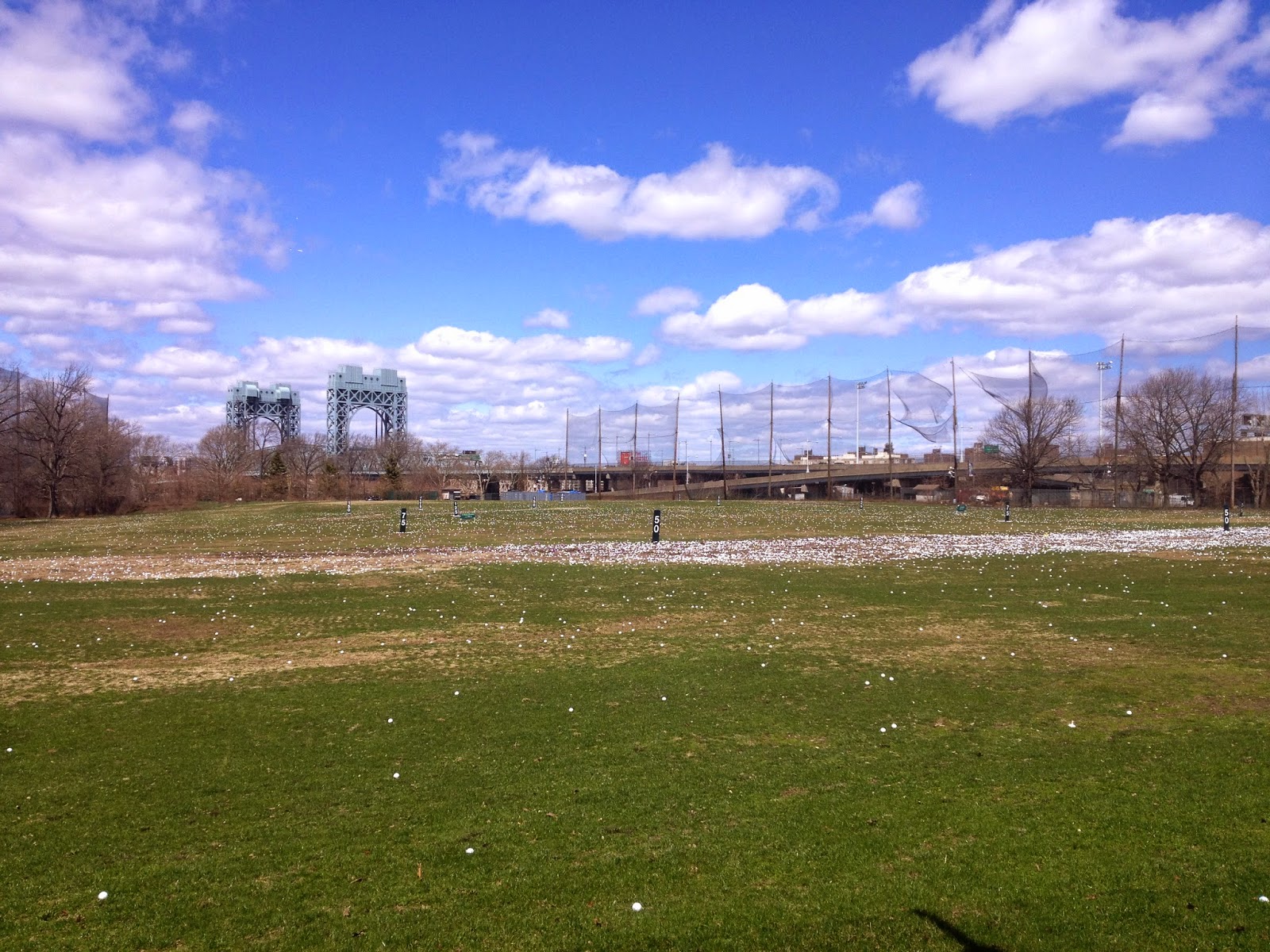 They've also put a series of yard markers out there, finally--a big improvement. But sorry, it still sucks. There's not a single flag out there to help you with the wind. That's not a lot to ask. The range is probably the most depressingly blank, nondescript space I've ever paid money to hit balls into. To call it utilitarian would be too generous. Whatever, I will save the snarky criticisms for the Yelp review. 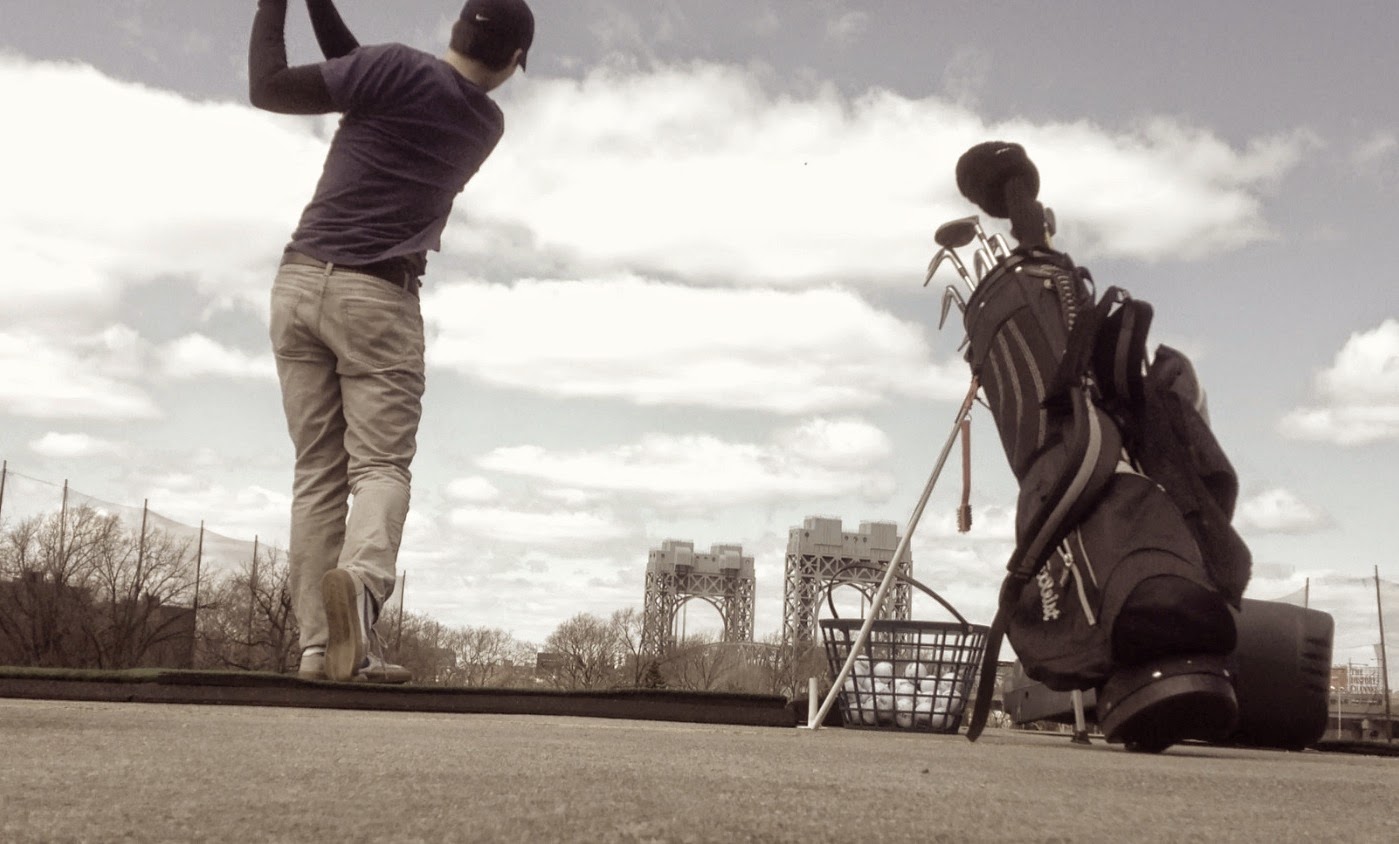 Practice is fun whenever you are striking it solid, at least. Lately practice doesn't feel so much like work as a voyage of self-discovery, an exploration into the deep mysteries of biomechanics and Newtonian physics, and that thing the Chinese refer to as "Qi".