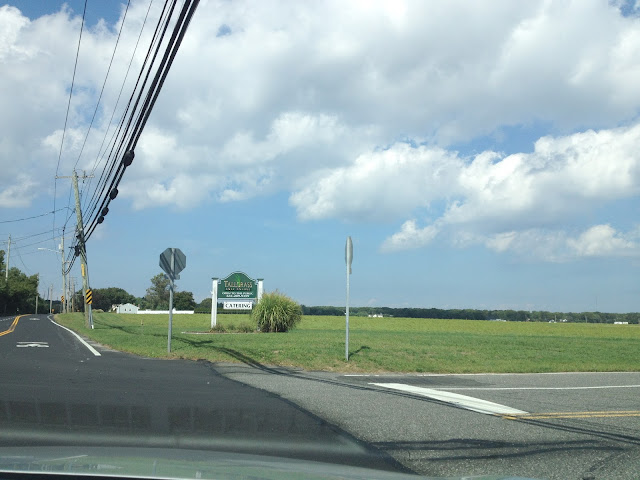 It's that time again. Some people celebrate their birthdays with cake. For the last few years I've celebrated with a round of golf at a nice, non-New York City course.

Picking out a course this year was a little trickier on account of my lack of interest in golf courses in general. It's been a forgettable summer in the golf ghetto but what else is new. Anyroads, I remember reading a feature in Golf Digest, or Golf World, or maybe it was just plain Golf, about some Gil Hanse designed course up on the north shore of Long Island, kind of a ways from stink of the city. I'm obviously hazy on the specifics of the article, but it painted a picture of a course where they do things the right way, where priorities were straight. On top of that, Gil Hanse is famous golf architect who's designing the Olympics or some shit. 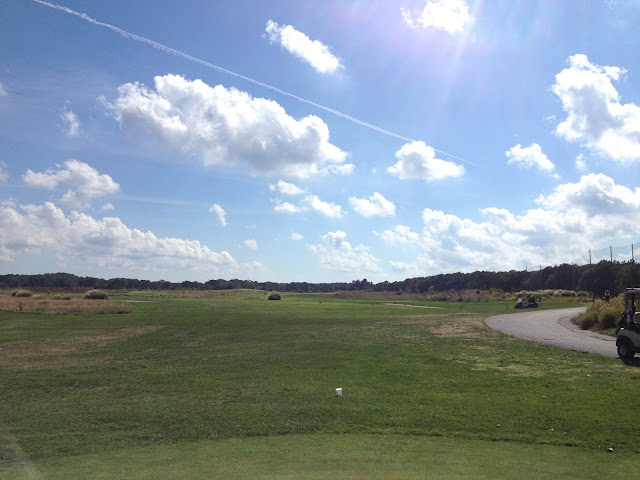 So based on what I'd read, or recalled reading I expected good things from Tallgrass. It certainly was an impressive sight after stepping out of the car and scoping out the wide, flat expanse of the property.

It didn't take long at all for my expectations to get thrown to the ground, and stomped on, and smeared around. We checked in with the starter and he told us we'd be up in twenty minutes. Fifteen minutes later he was nowhere in sight. I walked around the clubhouse perimeter like a lost idiot tourist, trying to locate this guy. Meanwhile in his absence, groups formed of their own accord on the first tee and began their rounds. 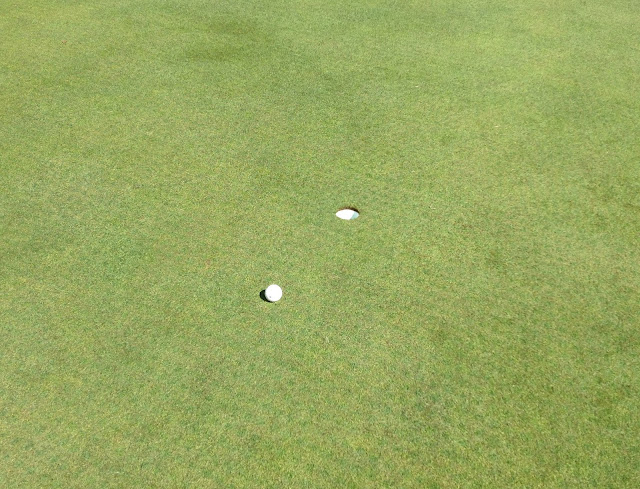 We practiced some more putts while my temperature rose. Hey, what do you know, they have those tiny little holes on the practice green, barely bigger than the ball. Maybe on another day I'd find that interesting. But here in the present, our tee time has come and gone; the starter is still missing from his post. The waiting group near the first tee is growing larger. Good will is gone.

I stomped into the pro shop and demanded to know where the starter was. Without missing a beat the counter guy says, "You're on the tee, right now!" He must have noticed a vein in my forehead or something. He must be well-versed in covering the ass of that deadbeat starter.

On the tee we introduced ourselves to the twosome that was already there, a father and adult son, named Mike, Steve, Chris, Matt, Joe, Tom... I don't remember. I was still steaming mad. I'm sorry to say I'd lost the mental grip on these guys' names about ten seconds after introductions. Sorry because they were about as nice people as you could hope to be paired with on the random. At numerous points during the round Dad offered us sticks of Slim-Jim meat snacks from a large stash. 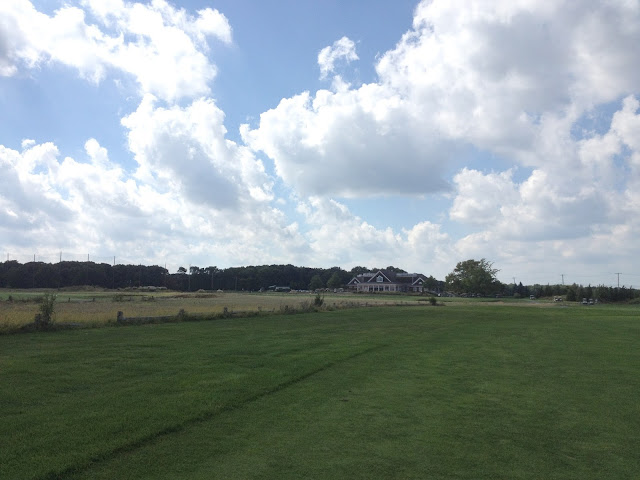 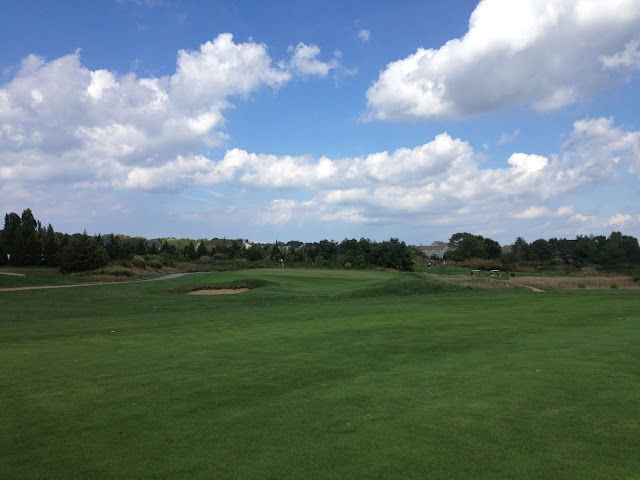 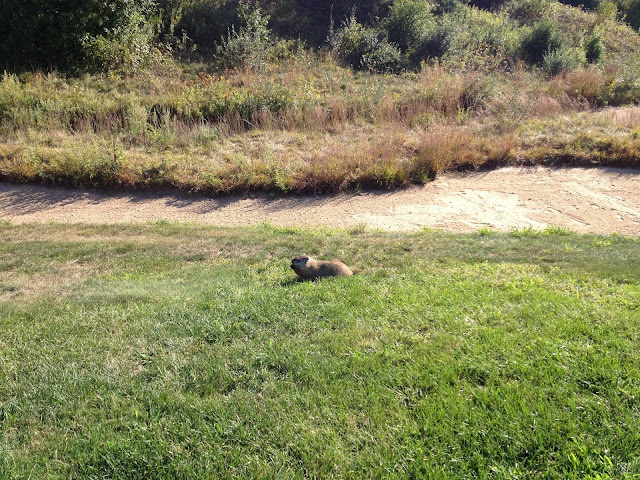 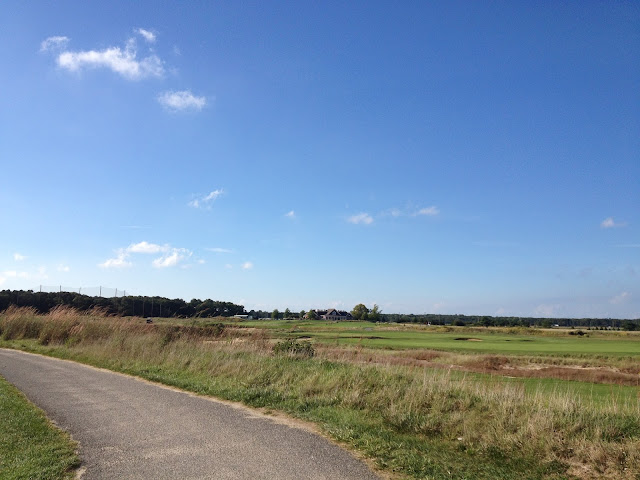 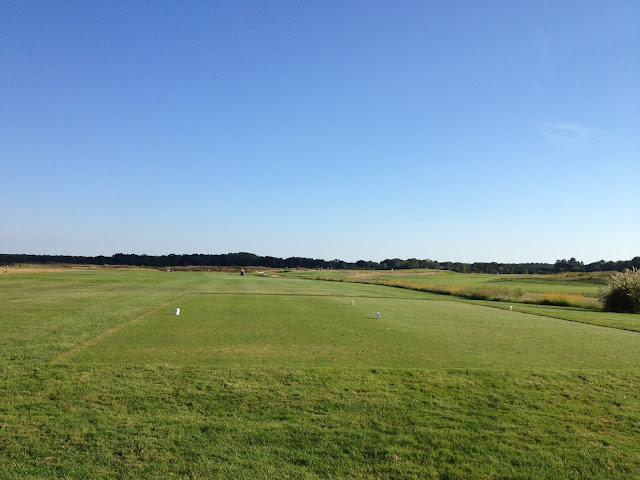 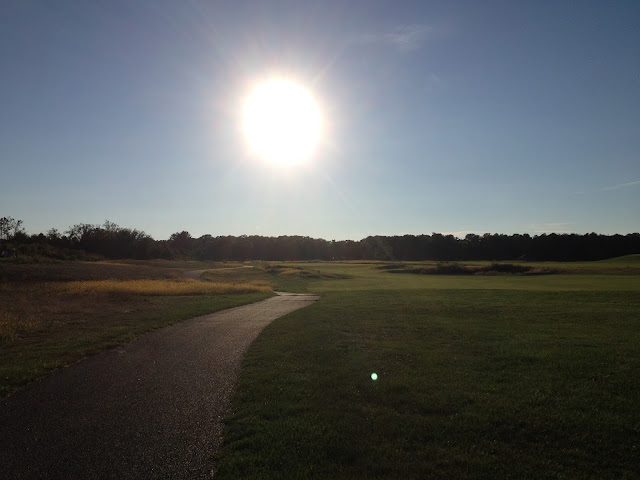 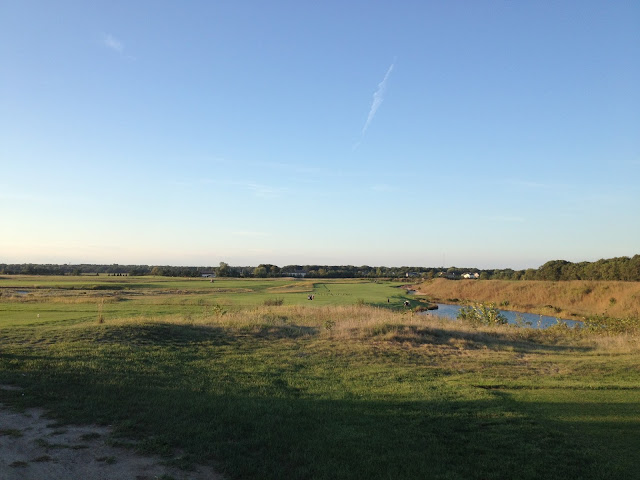 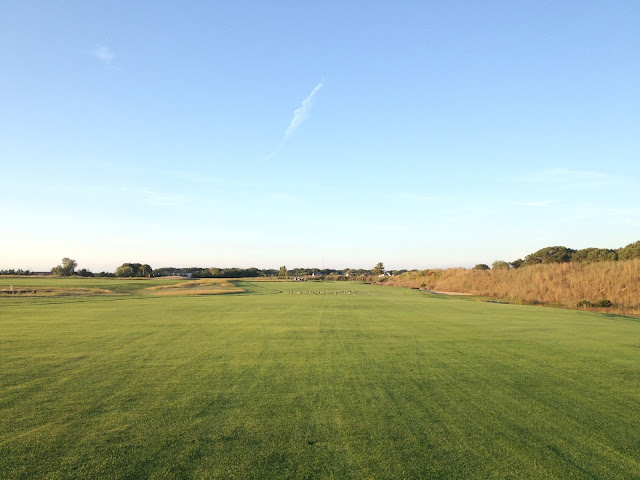 We made a good sporting effort to have a good time. There was a lot of waiting before every single goddamn shot. Neither a ranger nor a drink cart in sight all day. I say if you're going to subject your customers to soul-crushing slow play, you should at least offer them the sweet relief of alcohol. Whatever. Having given up my hope of enjoying a nice birthday afternoon back on the practice green, I settled into a muni-golf-business-as-usual mindset, and once I'd accepted that fate it wasn't such a bad time.

One of the perks of getting old is perspective, and as bad as things were on the course I made sure not to lose mine. Considering the starving and suffering in the world at large, I reminded myself of how lucky I am to get to play golf, on a beautiful sunny day, with my special lady. You might be thinking, what the hell has happened to me? I'm thinking it too. But when you are constantly faced with slow-golf, you only really have two choices: get really mad about it, or else grit your teeth and remind yourself about first-world problems. 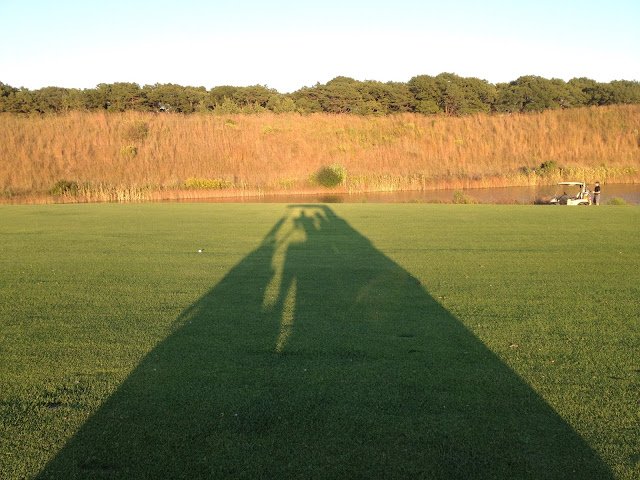 The shadows were getting super long, and four and half hours after our tee time, right when I started to get into a groove, we had to cut our round three holes short. I poured in a twenty-footer for the only birdie of the day (yay) and then told the guys that we had a dinner reservation to get back to and faced a long, gridlocked drive back home. The dad scoffed. "Dinner?!" He offered us some Slim-Jim's again. 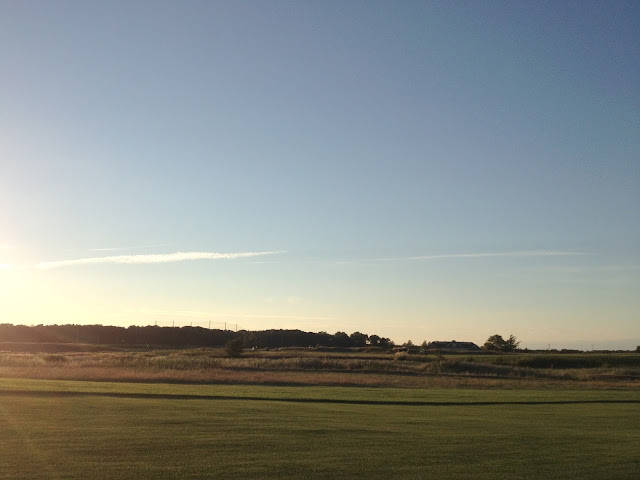 Old Gil did a nice job here far as I can tell. What do I know. It's a solid course; it looks attractive, the holes are tricky without being an asshole about it, and what more could you want? I don't know. I don't even really care. Maybe it'll be a good play during the winter. Then again, all golf courses are great when nobody's on them.

For my next birthday, maybe I'll find a fancy driving range somewhere and splurge on a jumbo bucket. I'll stick some candles in it. If that sounds pathetic, you can't tell me it's any worse than sitting on your ass in a golf cart, cursing under your breath, drumming your fingers on the steering wheel and watching terrible golfers sucking for an entire afternoon.
Posted by Legitimate Golf at 8:33 AM