IBP: Rise of the Machines 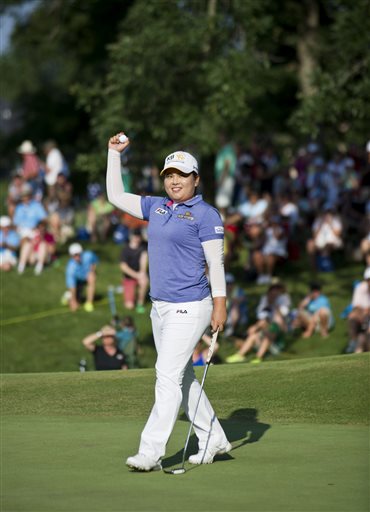 Yesterday world number one golfer Inbee "IBP" Park won for the fifth time this year on the LPGA, reaffirming the emergence of yet another Asian as the runaway best player in women's golf.

This week is the U.S. Women's Open on Long Island NY, and here she'll be attempting to win a third "major" event consecutively. Just how "major" these women's events are is open to debate, but IBP has now won 7 of her last 23 starts, and that is indisputably pretty excellent.

As of today, there are just three white women in the top ten of the world rankings, only one of them American. Make of that what you will.

Many will see the rise of IBP as another blow to an already-flagging LPGA product. In the other half of the golf world though, many more will view her success as a triumph of hard work, steady nerves, quiet self-confidence and more importantly some kick-ass putting. (Park is ranked first and second in both putting stats available on LPGA.com).

I say "Why not?" I caught a bit of the end of yesterday's tourney and was pretty darned impressed with IBP's play over the last couple holes. She swung with confidence, putted with conviction and if you look closely, seems to have developed the stare of a real tournament killer. (If there was a putt to save the world I think that an Asian woman, either IBP or Ai Miyazato, would probably represent mankind's best hope.)

No matter how boring a player seems, winning golf tournaments in bunches demands attention. So it'll be interesting to see how this week's U.S. Women's Open, i.e. far and away the biggest tournament in the women's game, plays out and what kind of fanfare will accompany IBP's bid for major championship immortality.
Posted by Legitimate Golf at 9:11 AM