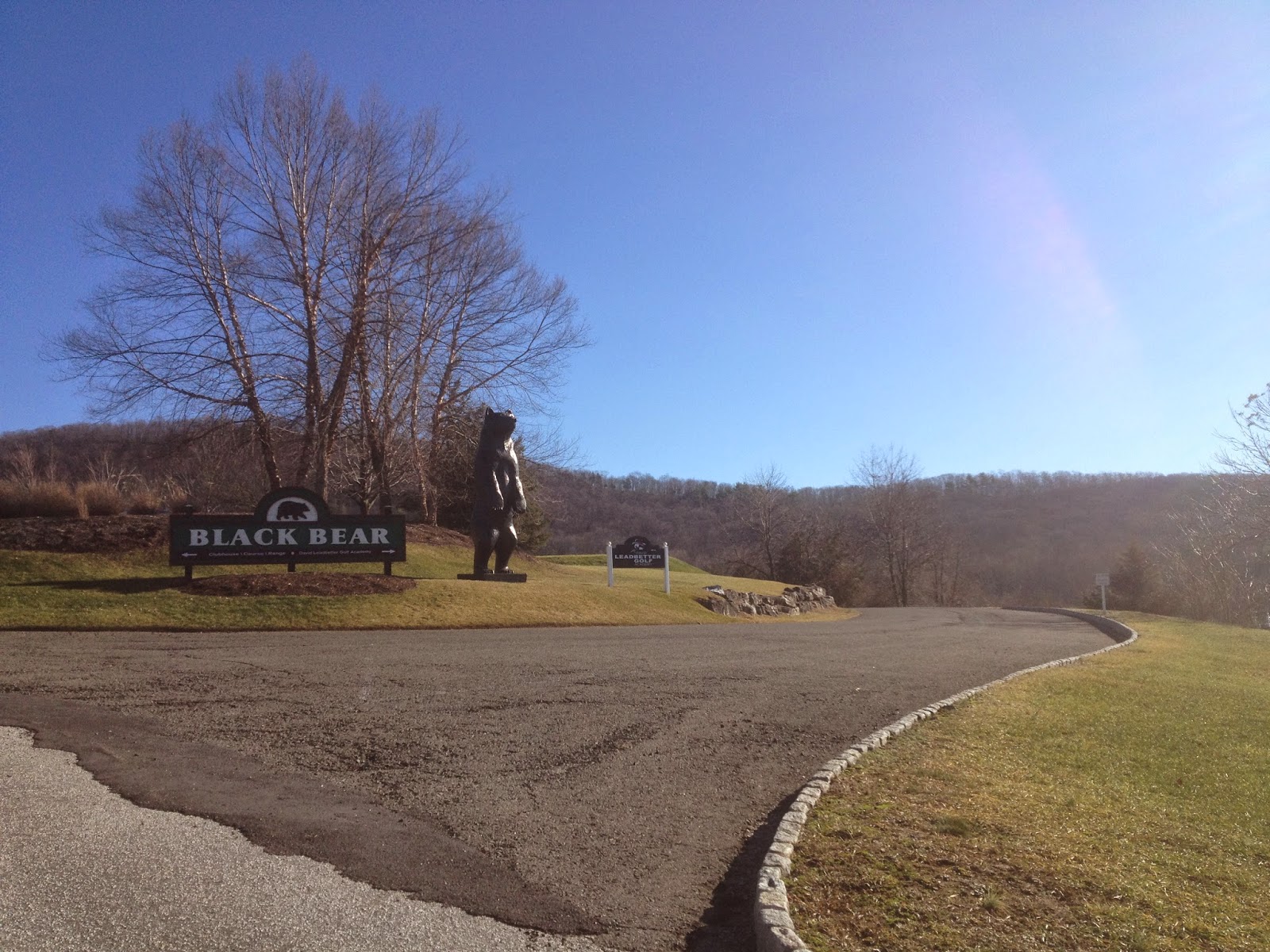 Black Bear is one of the six courses in the Crystal Springs mega-resort/recreational fun zone in northern New Jersey. Conveniently located about an hour northwest of the city, and also featuring a decent ski resort, this place is starting to feel like a regular haunt for us. And why not? It's quiet, sparsely populated, moderately scenic and there's plenty to do. Drive away from the city for one hour in any other direction, you're not gonna beat what Sussex County has to offer. 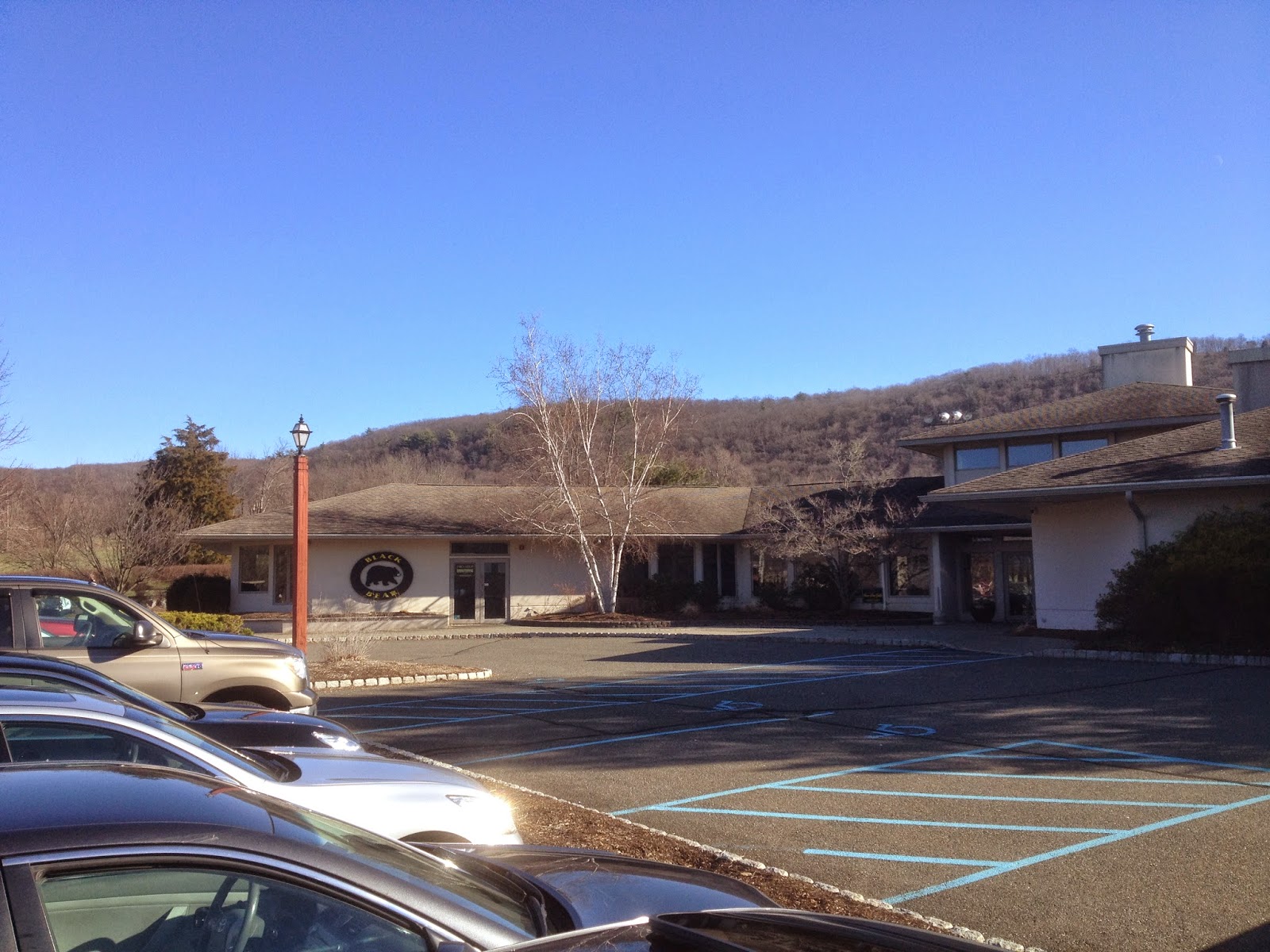 Naturally each of the six courses has its own character. Ballyowen is the fancy links course for the big spending asshole types (not that there's anything wrong with that--I would love to check this course out). Crystal Springs, the ball-buster, the hardest course in the whole state (which we found out the hard way a couple years ago). 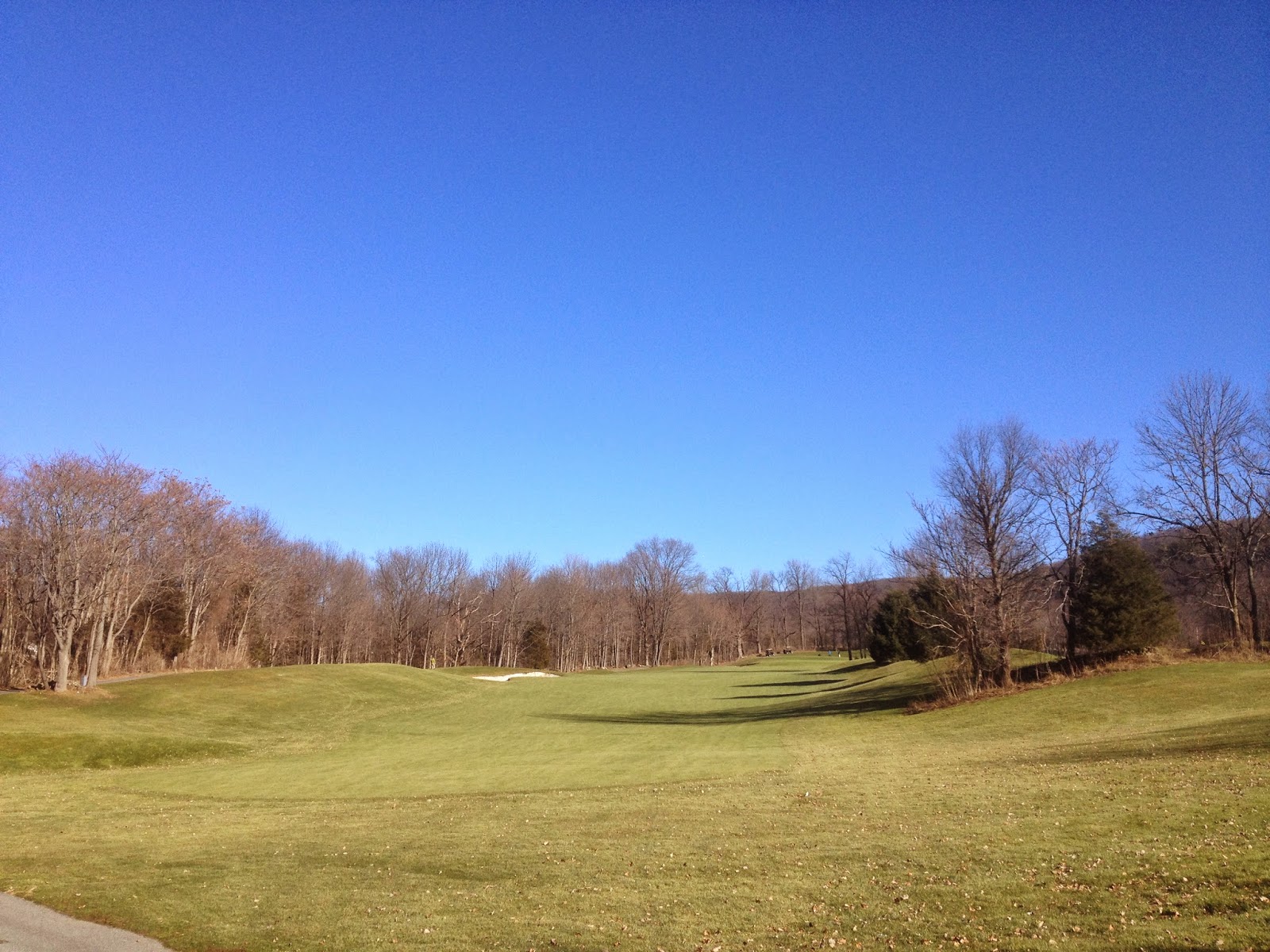 Black Bear is self-described as the "recreational golfer's paradise". Uh-oh. That sounds like a euphemism for shitty and unkempt if I ever heard one but hey, we got a good tee time deal, and it's winter conditions, so I'll keep the expectations nice and low. 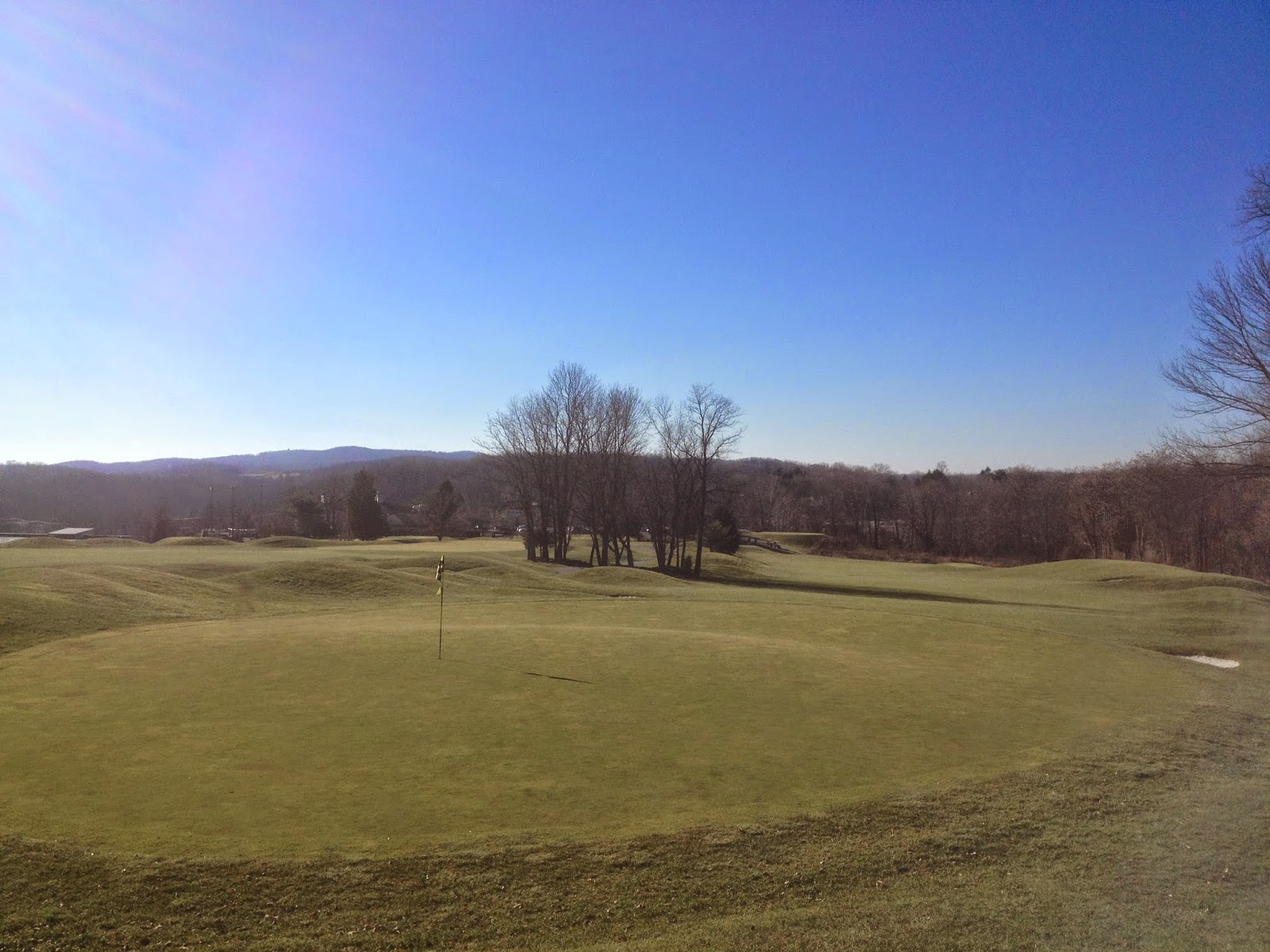 Looks like pretty standard tri-state area rural golf, which is fine by me. 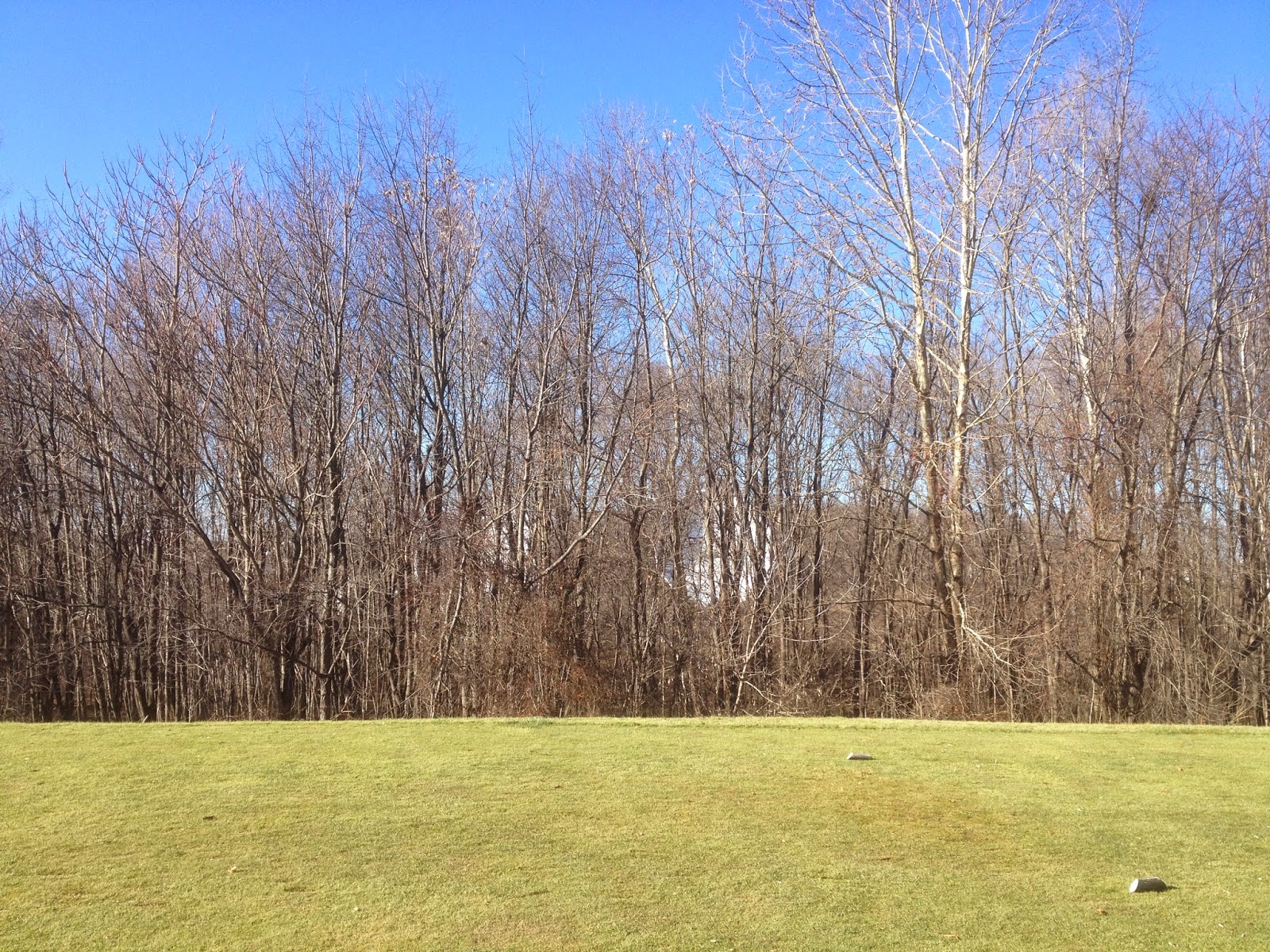 A couple of gigantic satellite dish-type things which I found intriguing. 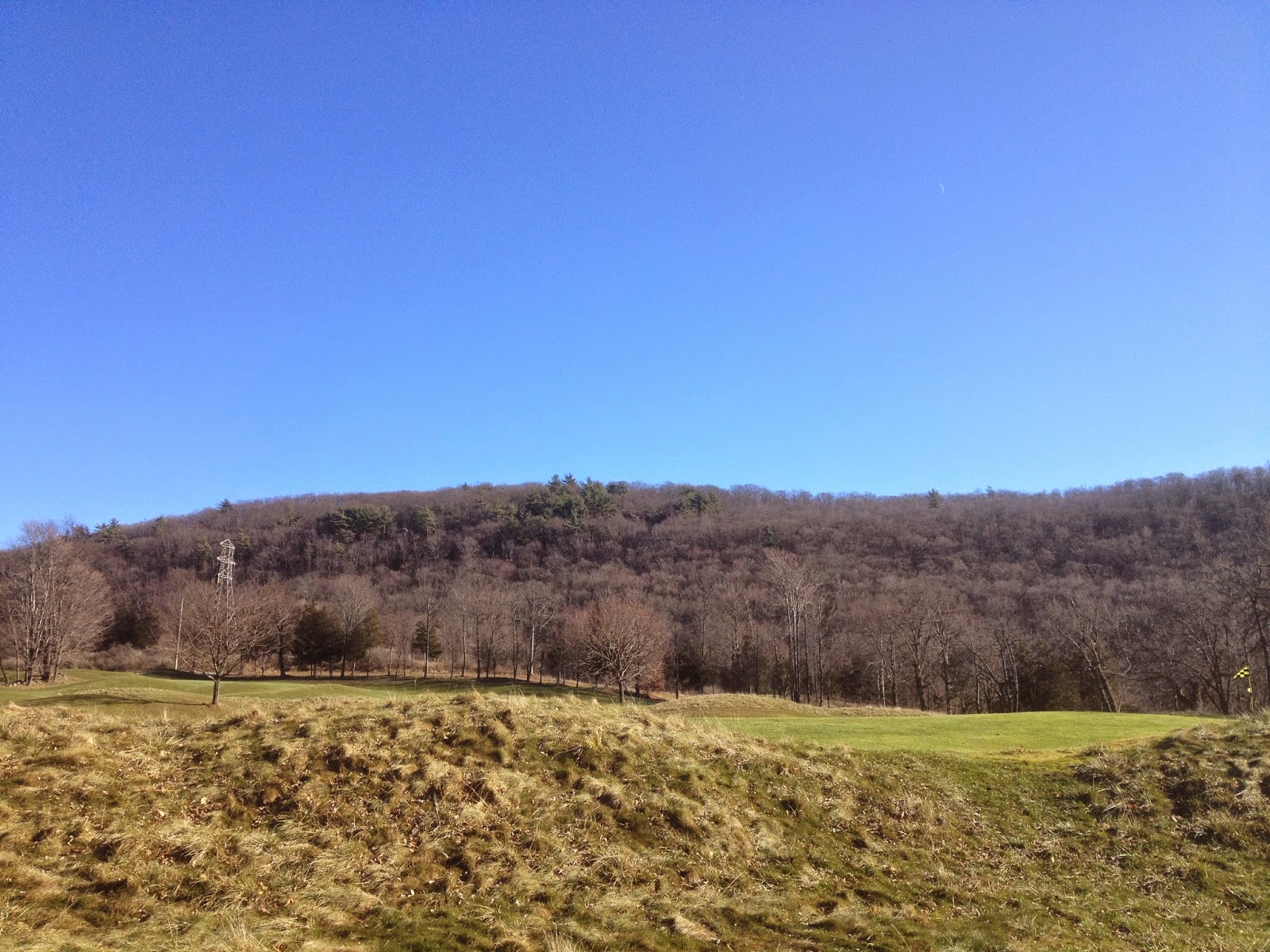 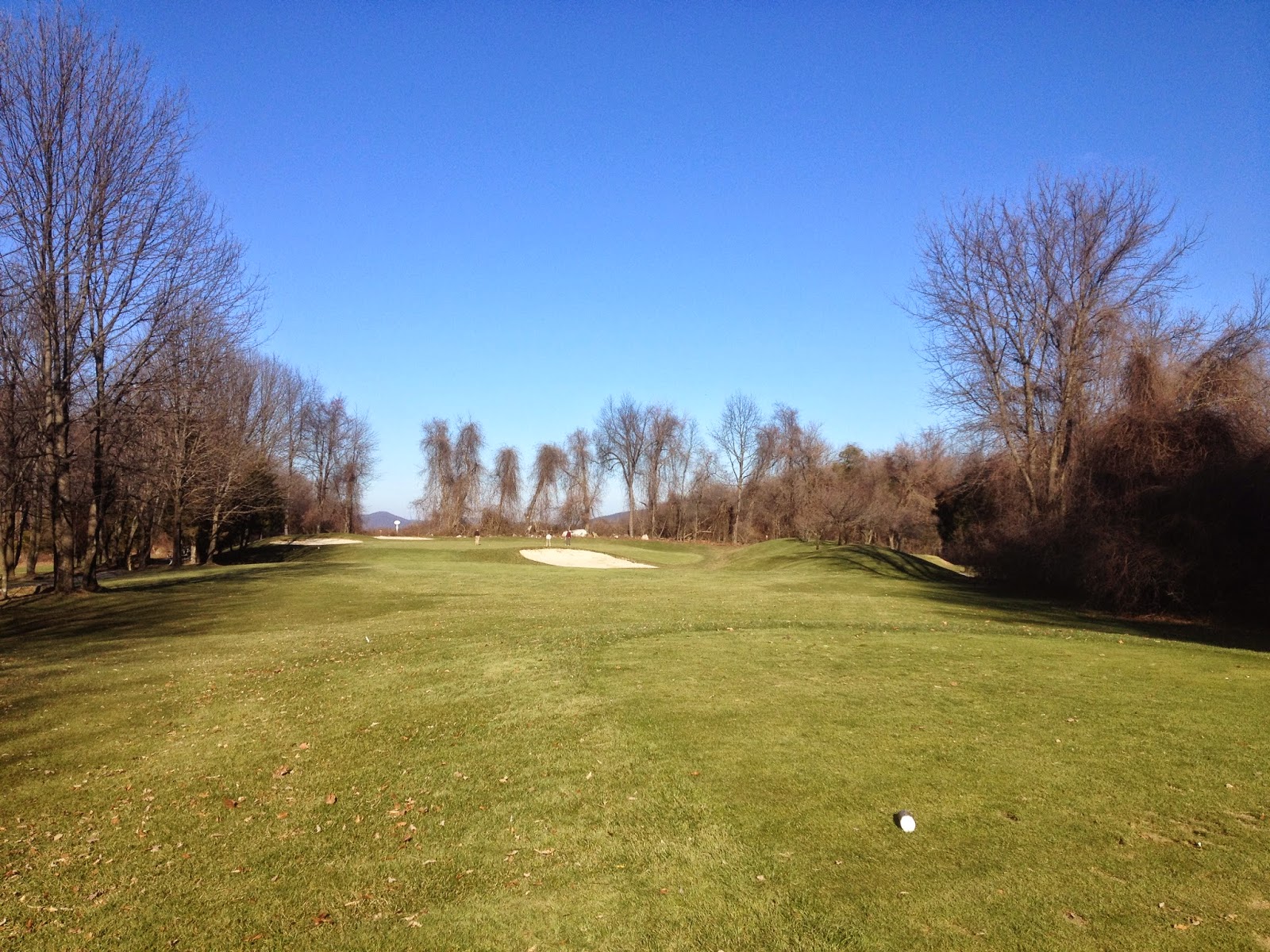 Look, I know fuckall about course design, but this place seems alright to me so far. 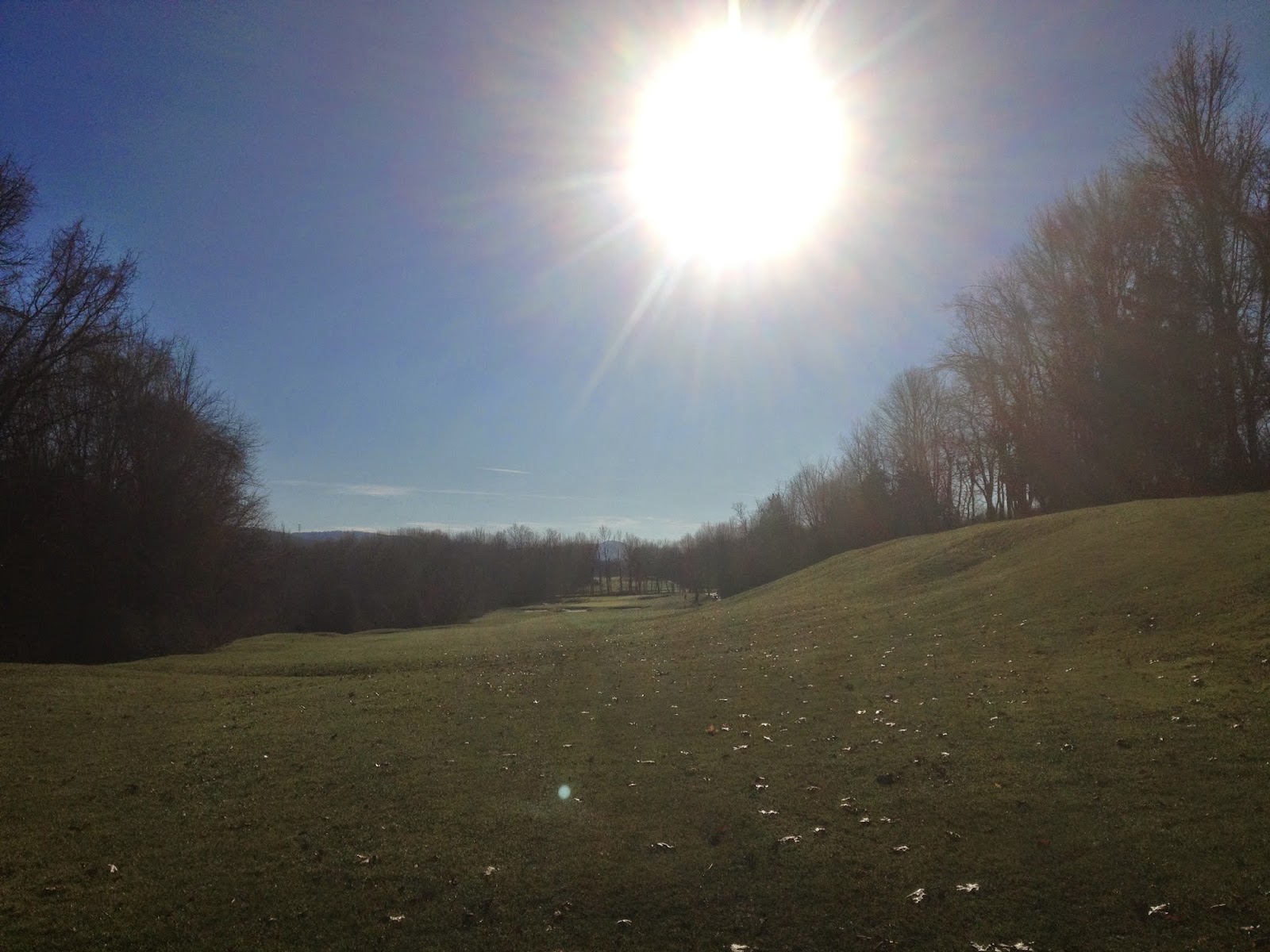 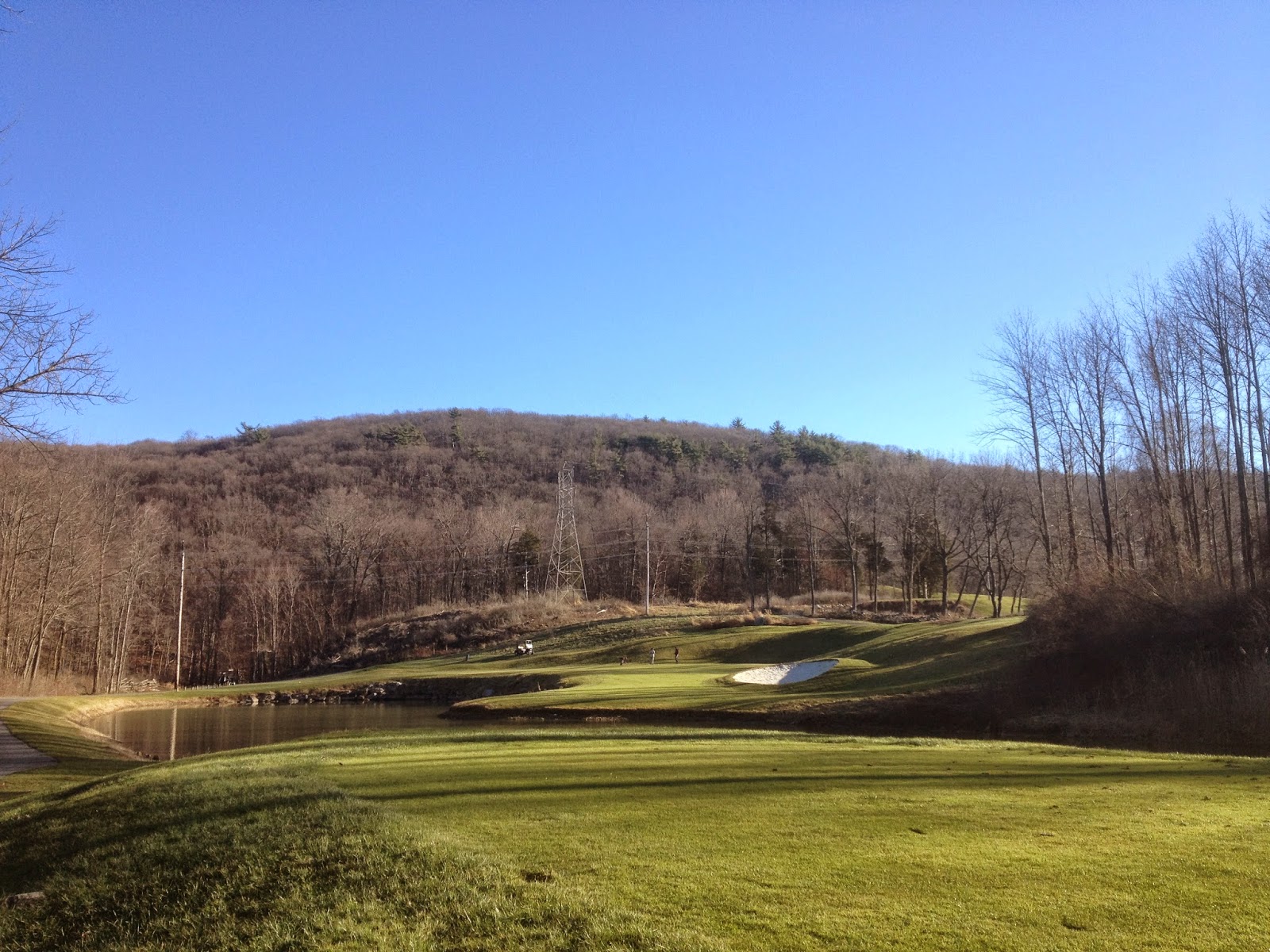 7th hole, postcard-esque par 3. I three-putted the tiered green, which is kind of the story of the whole afternoon. 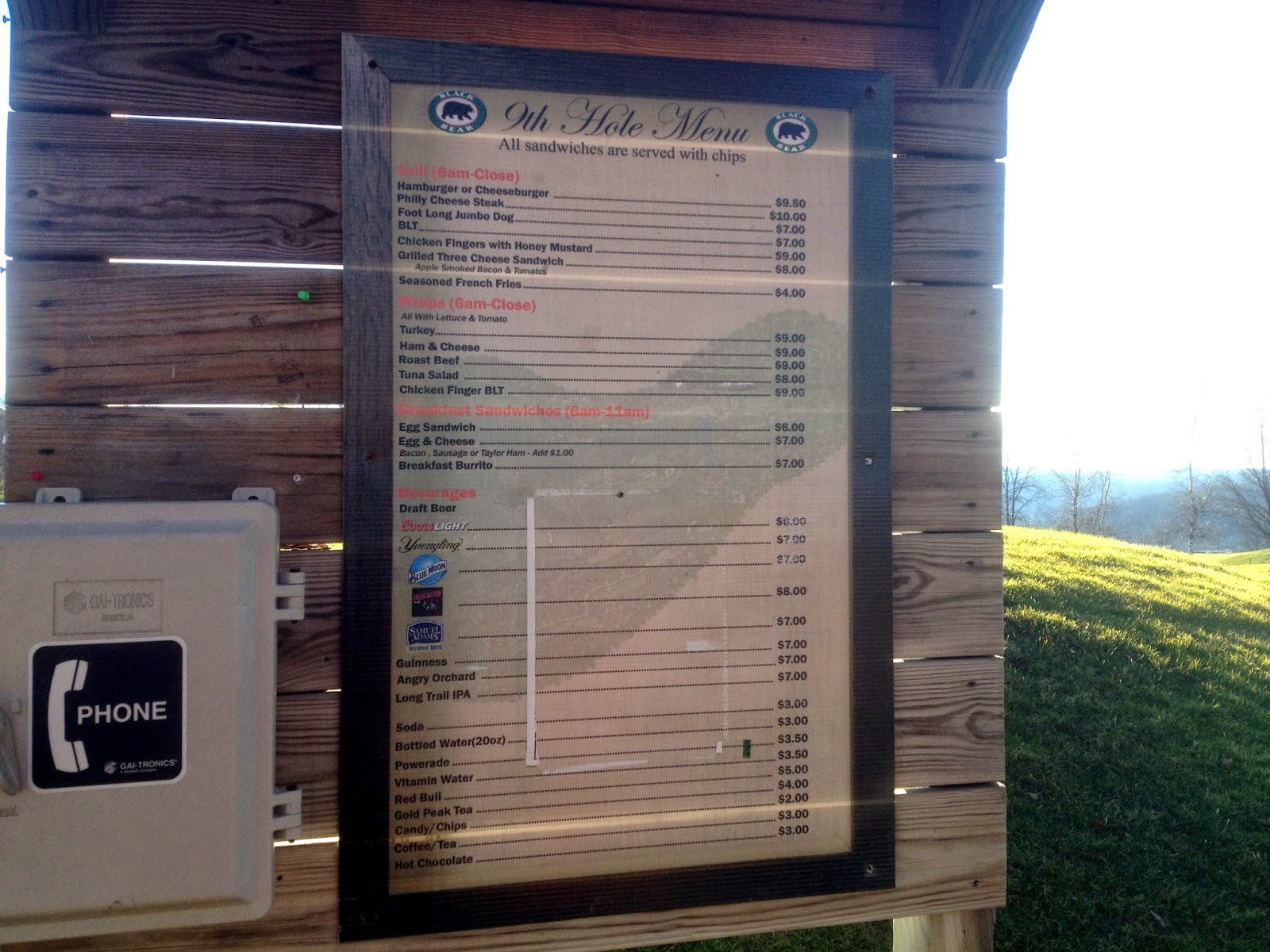 We live in an age of GPS, in which you can order up food on a touchscreen inside your cart, yet there is something reassuring about this kind of old-timey analog setup. Speaking of Black Bear's eatery, its apparently one whose reputation precedes it. This menu sure beats the hell out of most. Check out an impressive selection of both cheap and high falutin' beers; even some imported shit. If this was a slow round during the warm season I'd be tempted to order up a big multi-course spread. As it is we are playing wintertime express golf, and I feel I'm already lollygagging enough by gawking at the menu. 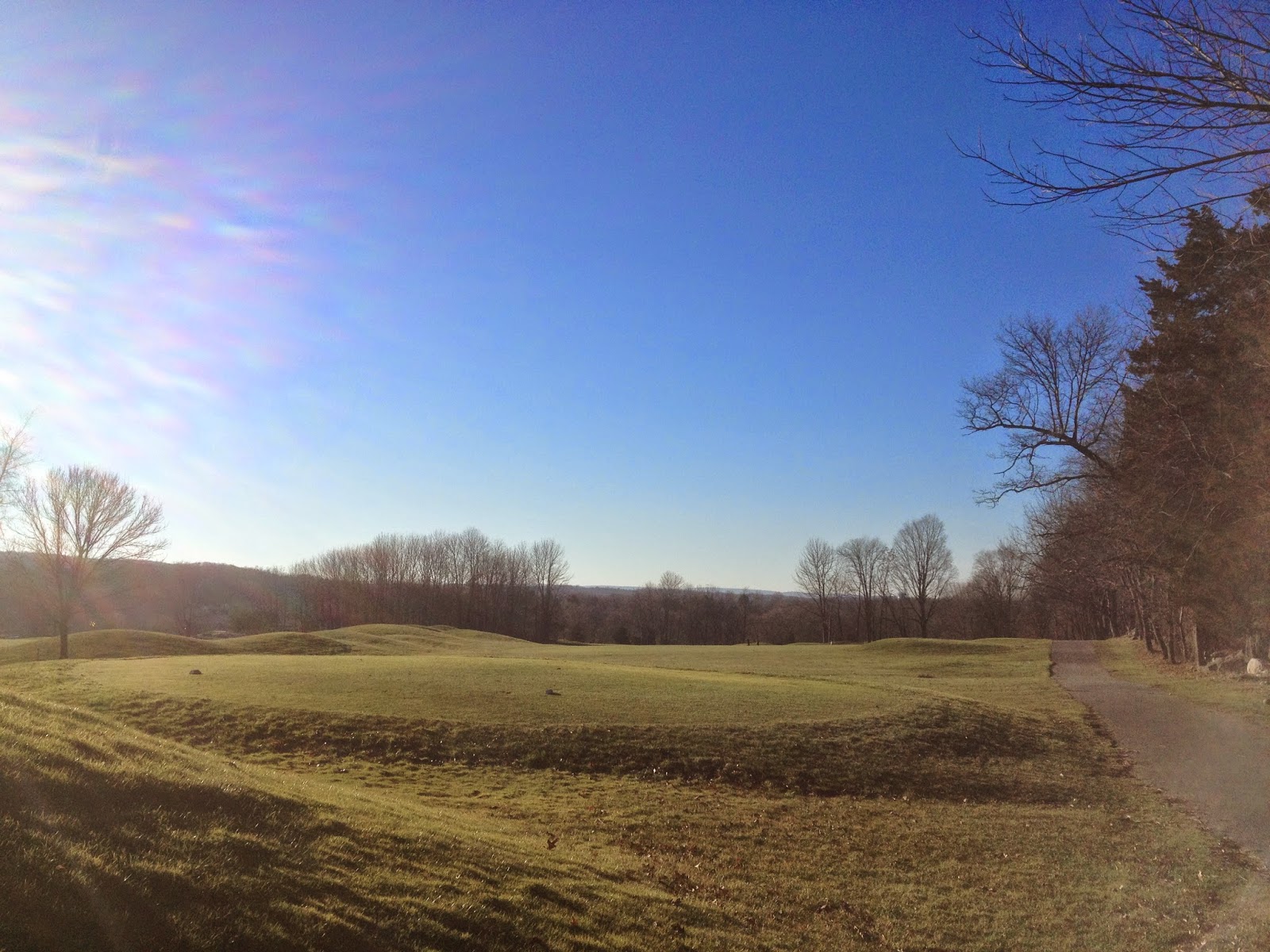 The 9th hole is a nice one, with its big sweeping vista overlooking the roomy dogleg fairway. Ms. LG had a memorable showing here, following a good driver with a solid 5-wood off the deck. She never signed up to be the first lady of alternative golf blogging but you know what, she is a pretty good sport about it all. 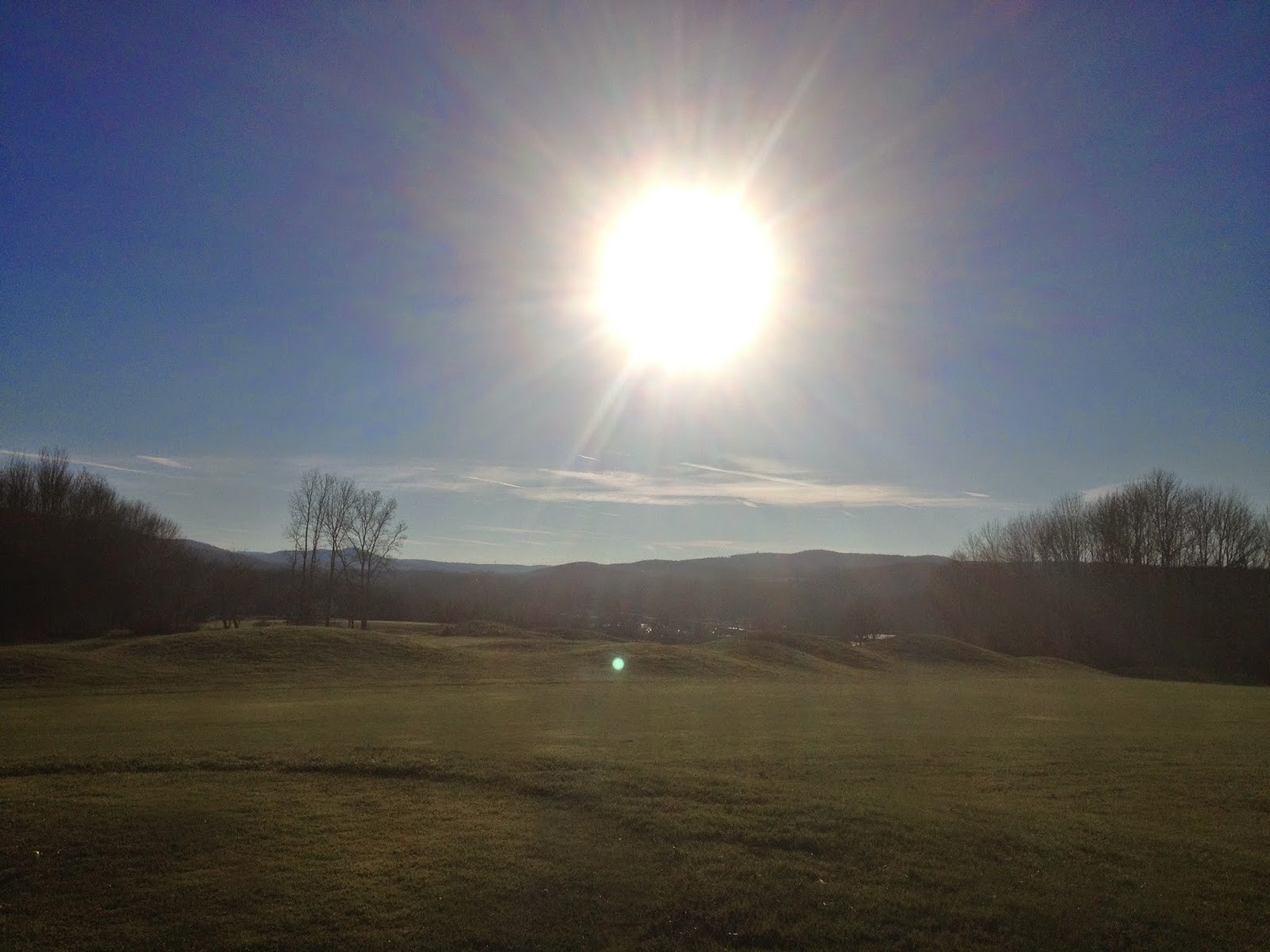 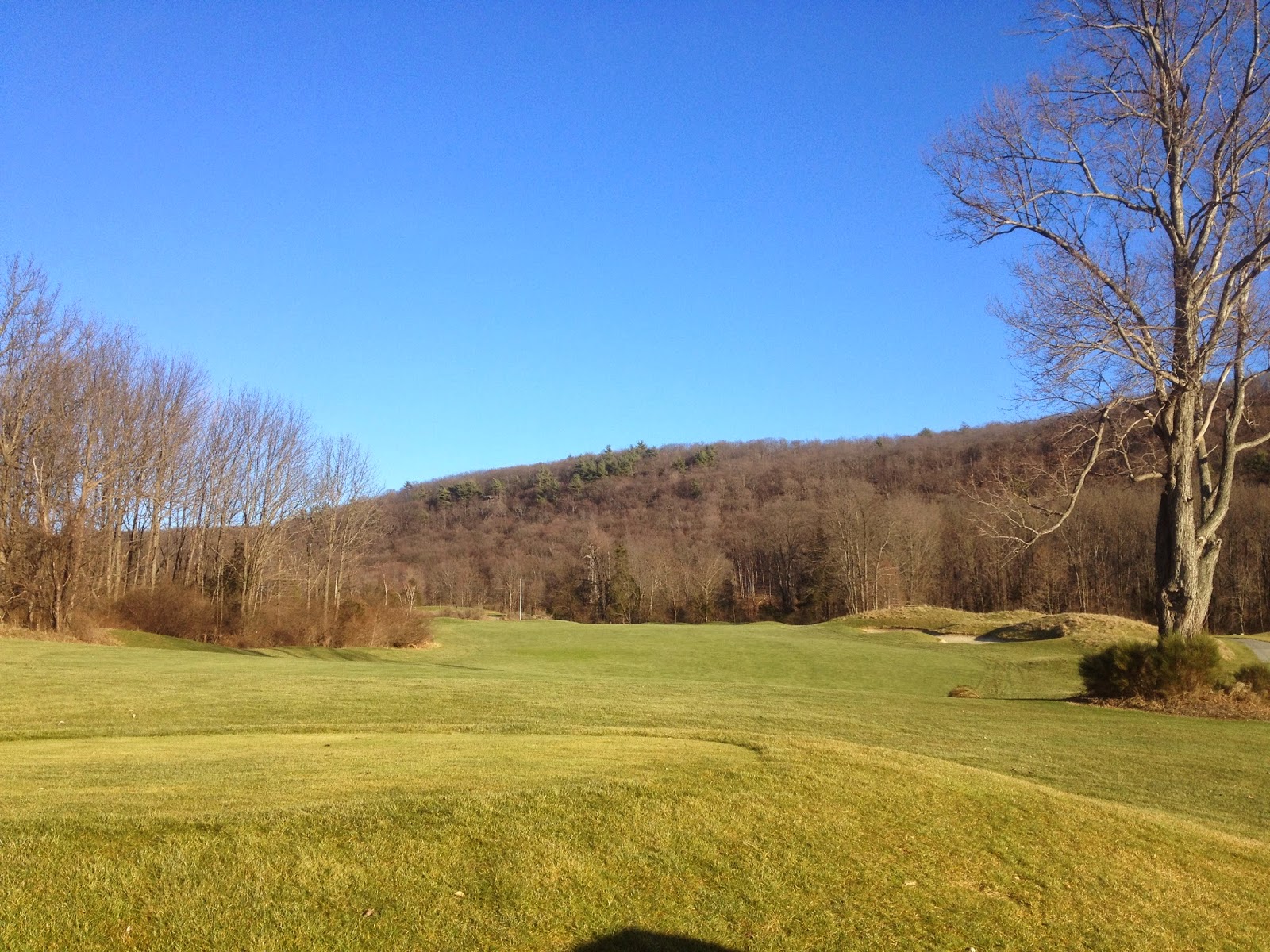 The start of the back nine, which meanders deeper into the mountain woods. 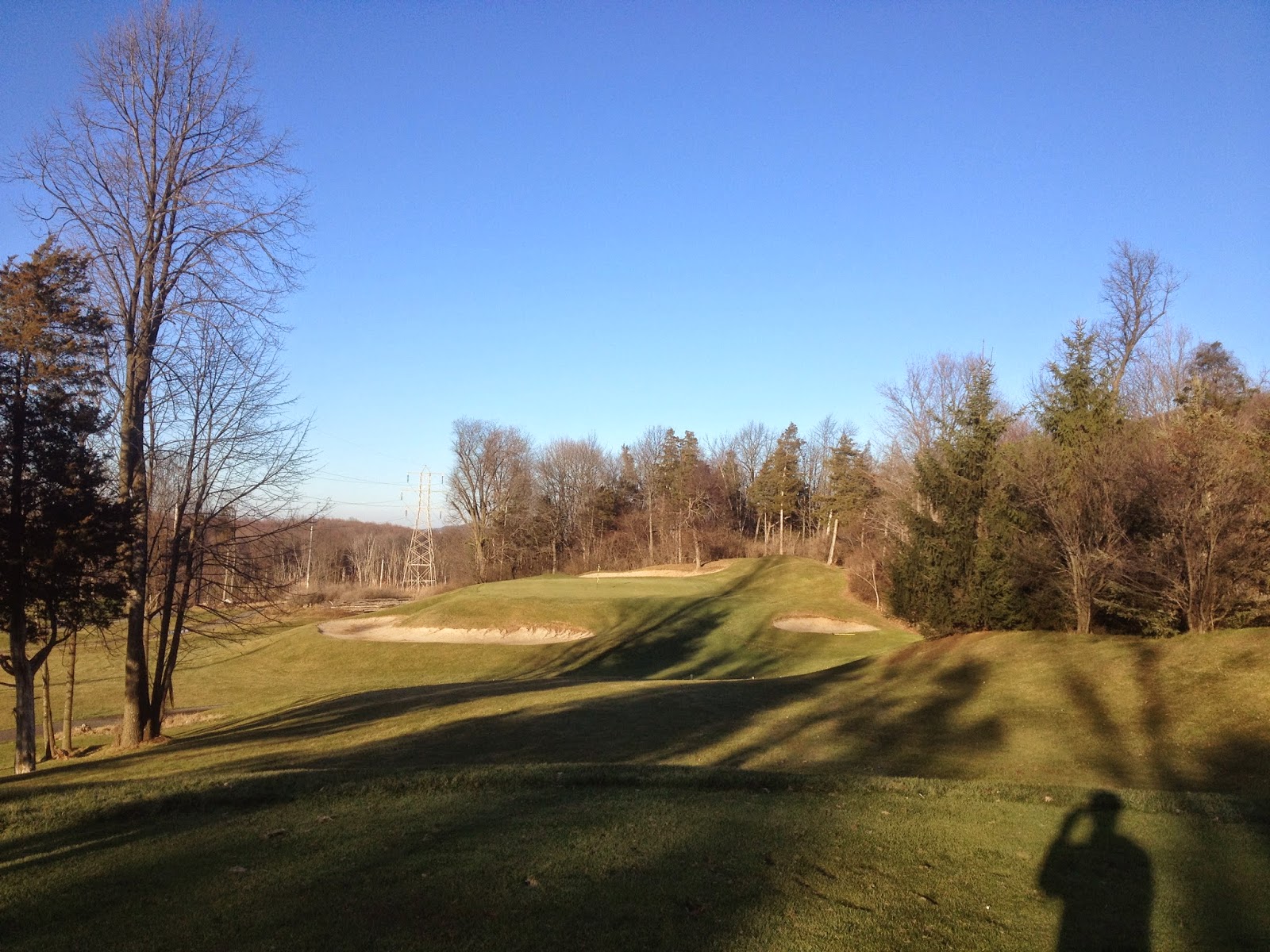 The 11th the kind of par 3 I can get behind: short in length, with a well guarded devilish tiered green that has 3-putt written all over it. By contrast the majority of par 3's back in the city are merely big and boring, no subtlety, no nuance, little imagination. 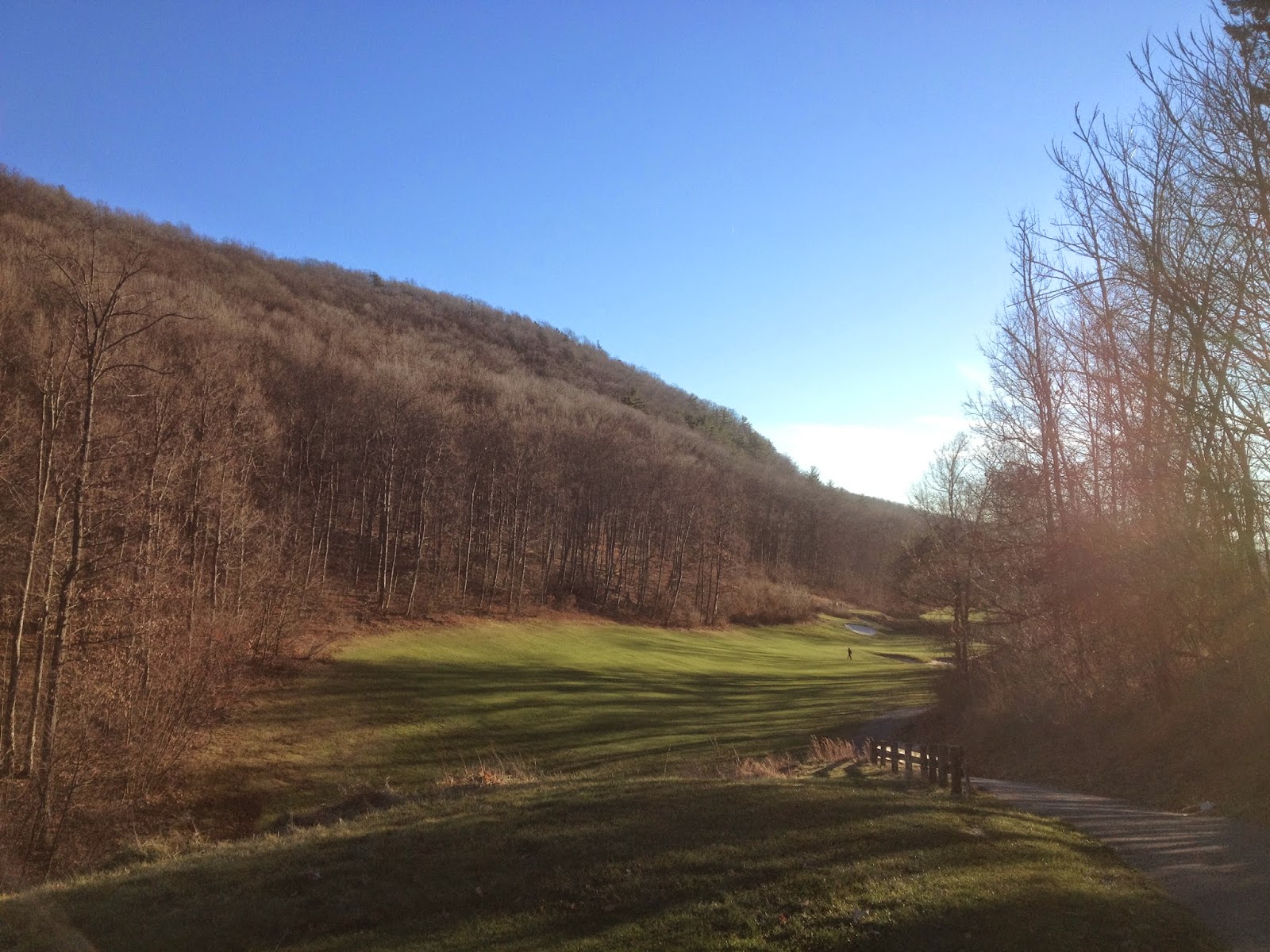 The whole course is quiet and remote, but it gets really secluded on some of the mountainside holes on the back nine. 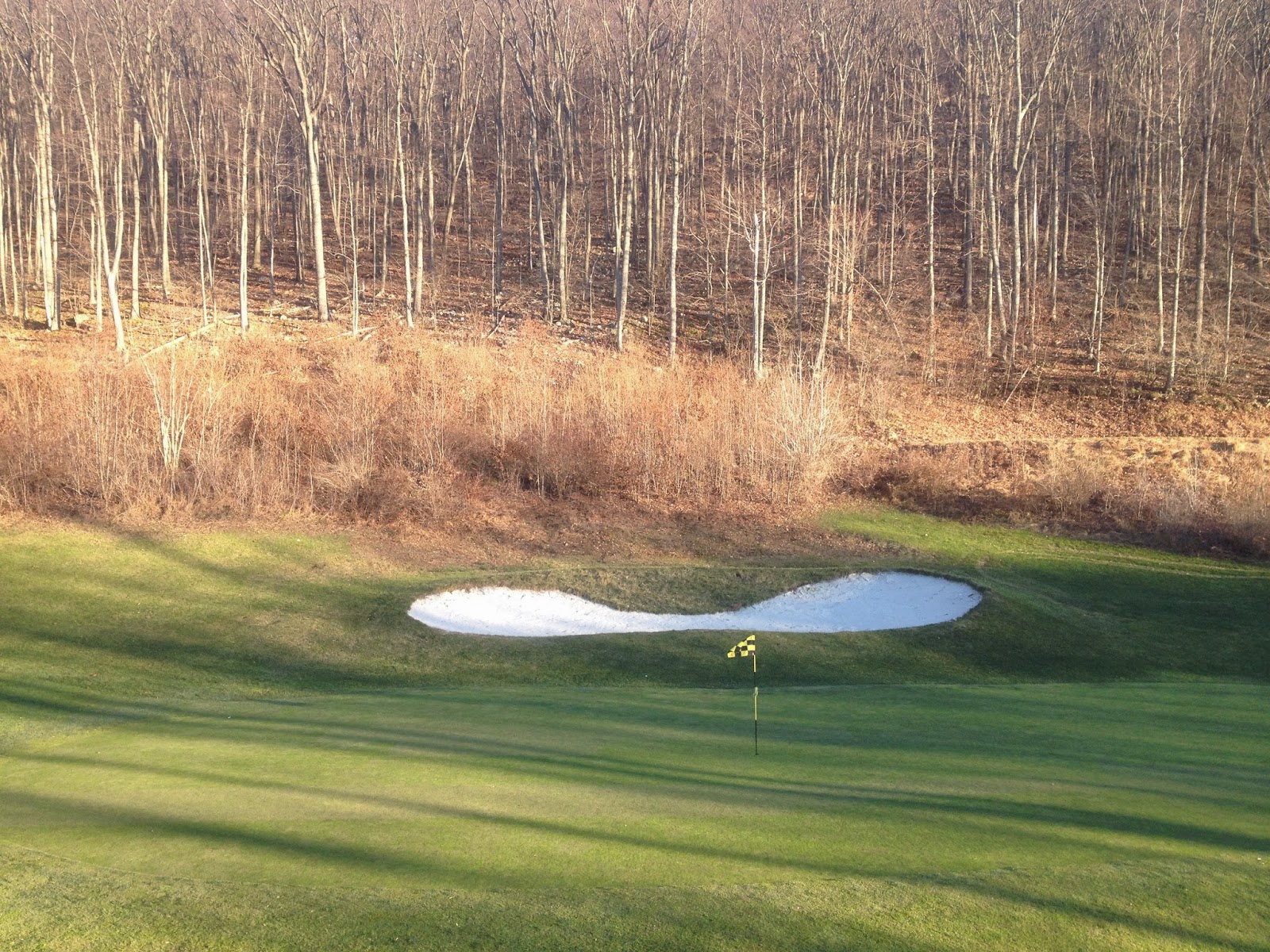 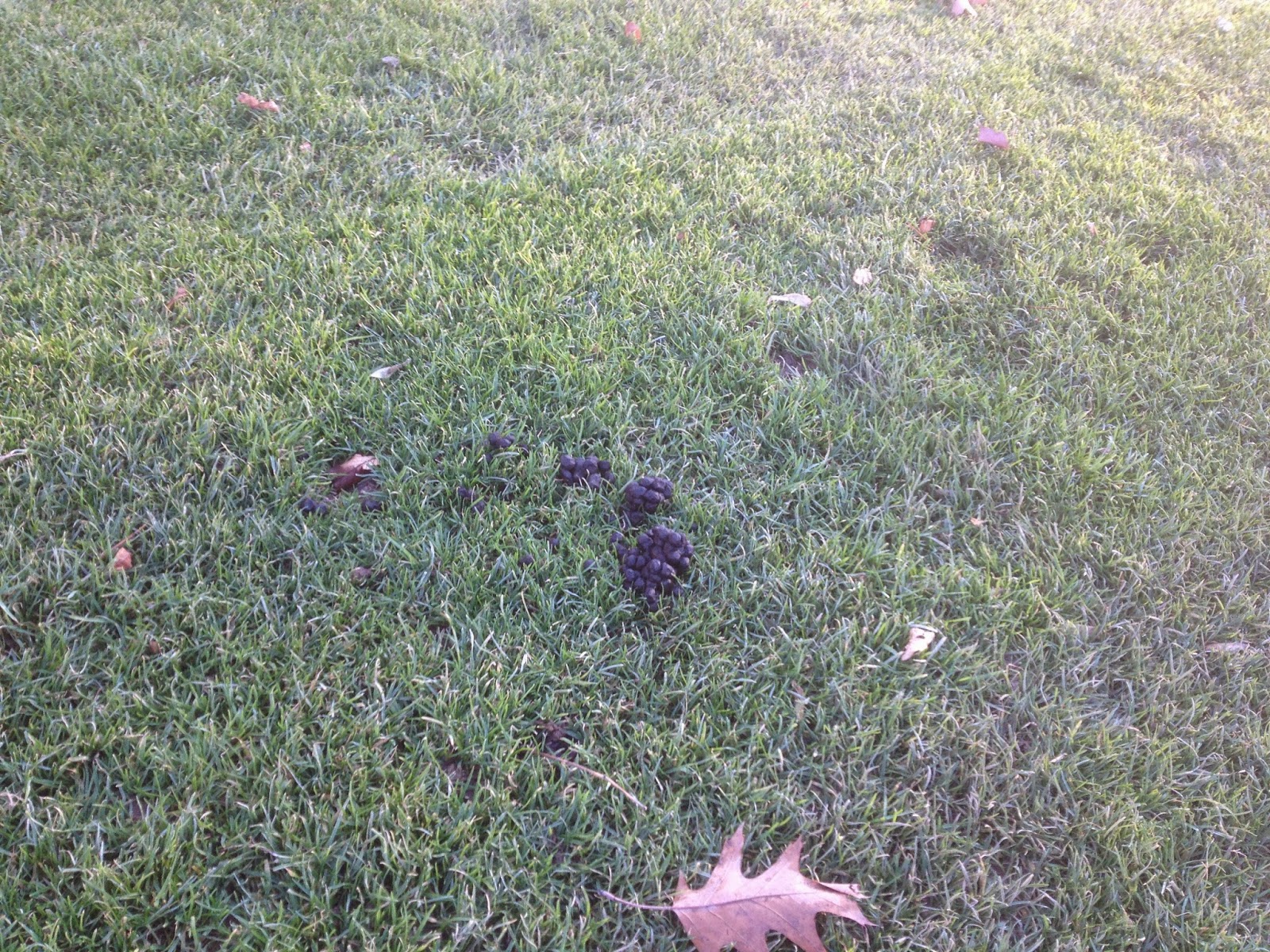 Some really unusual-looking shits. Just when you think you've seen all the different shits in a given geographical region... Life, it's full of surprises. 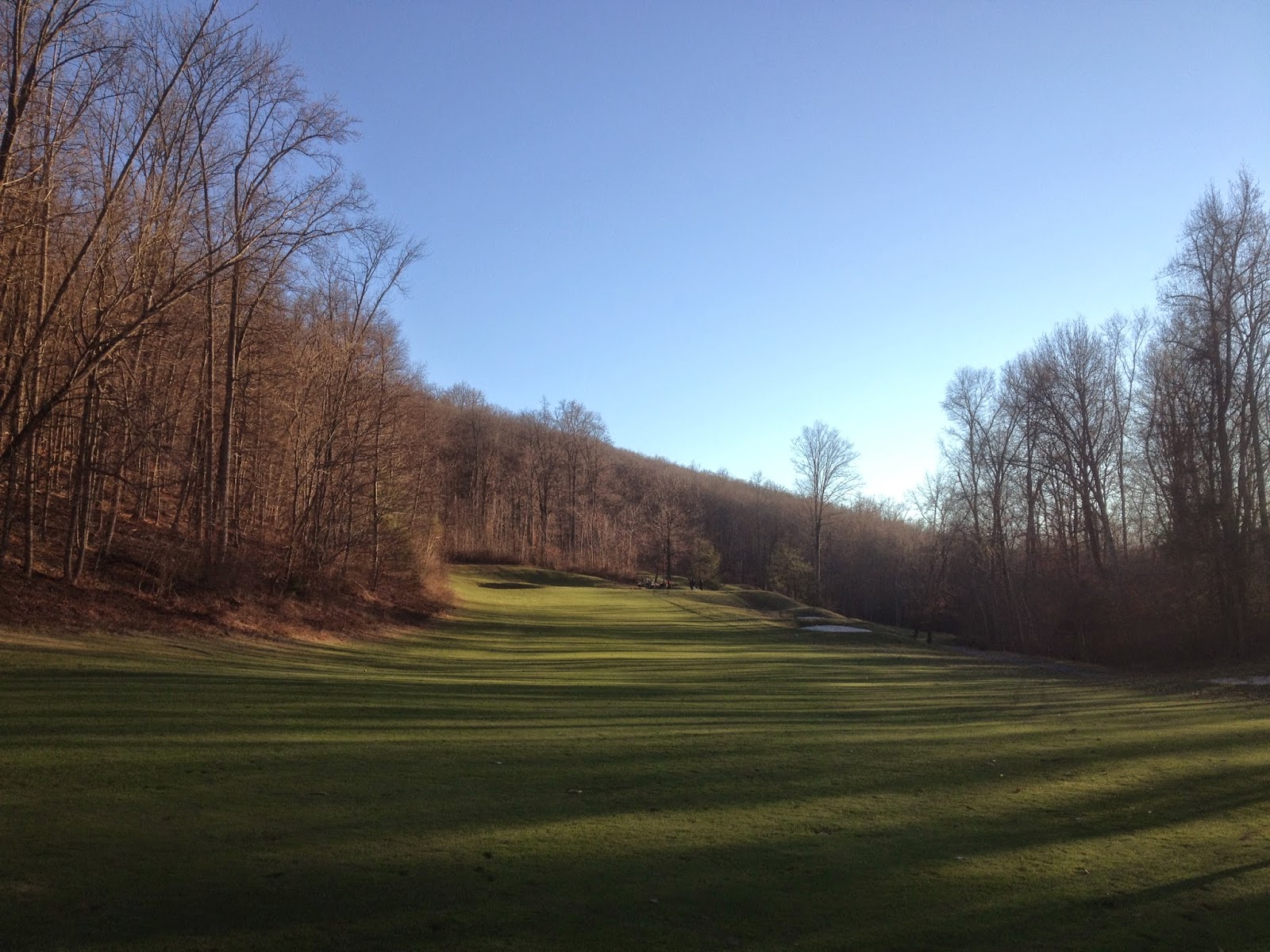 Black Bear is a medium to short course, but there are plenty of elevation shenanigans. Here on the mountainside par 5 13th it feels like you're hitting up to the rooftop of a three-story building. I hit a corker of an approach here and given the outrageous hole location, I was probably lucky to get in with three putts. 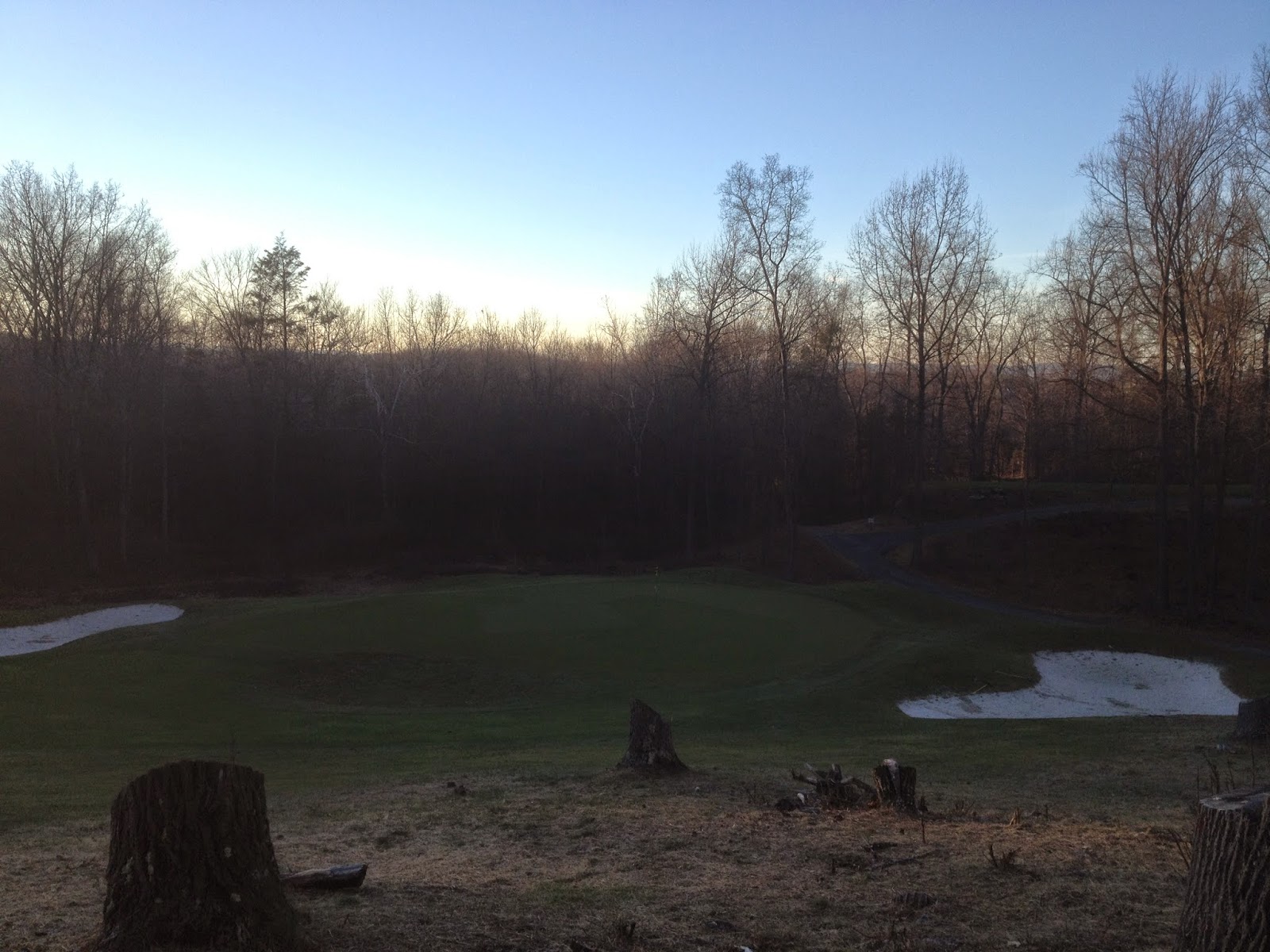 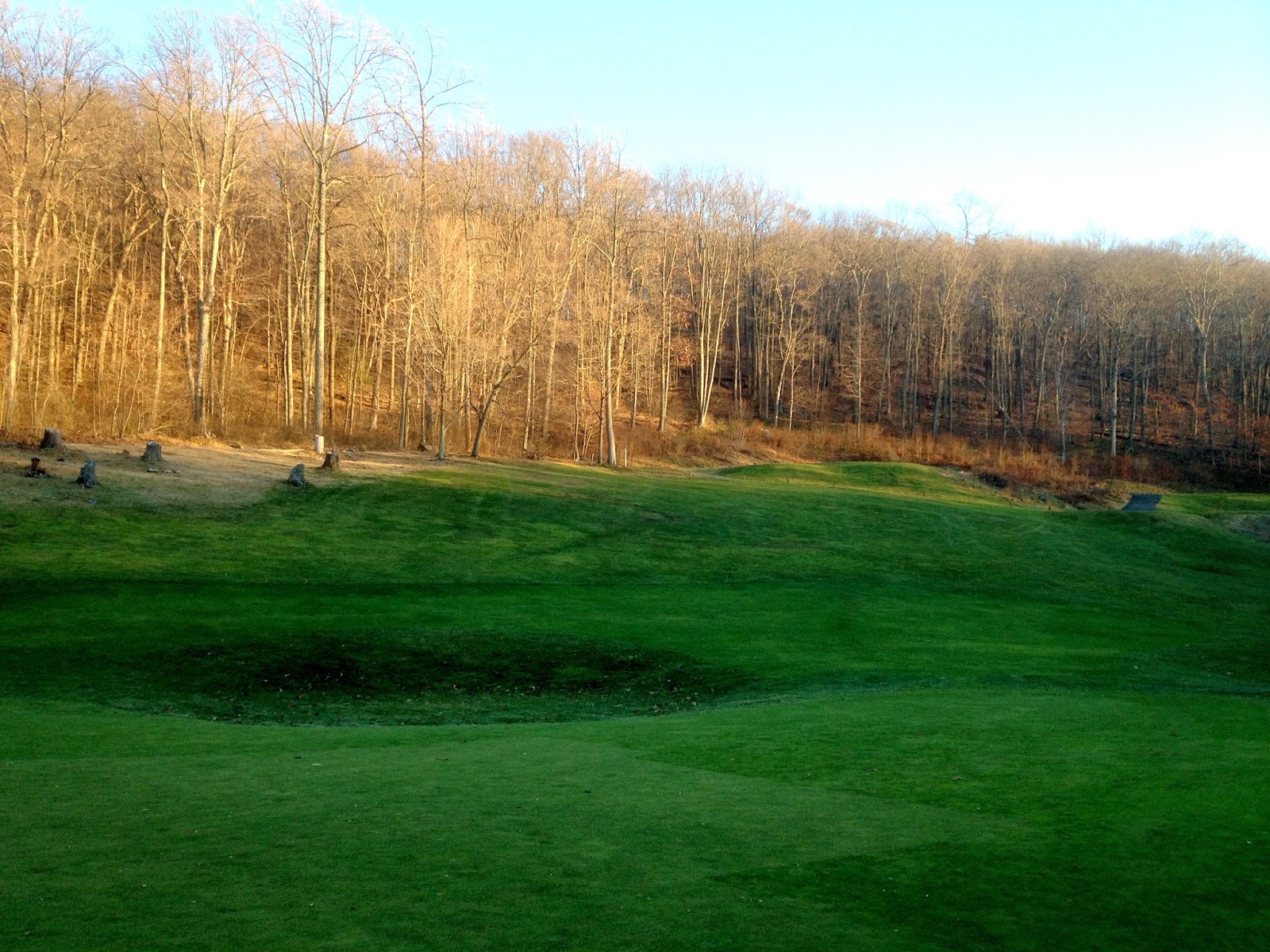 The next hole, a little par 3, runs back down the slope. Another green, another three-putt. 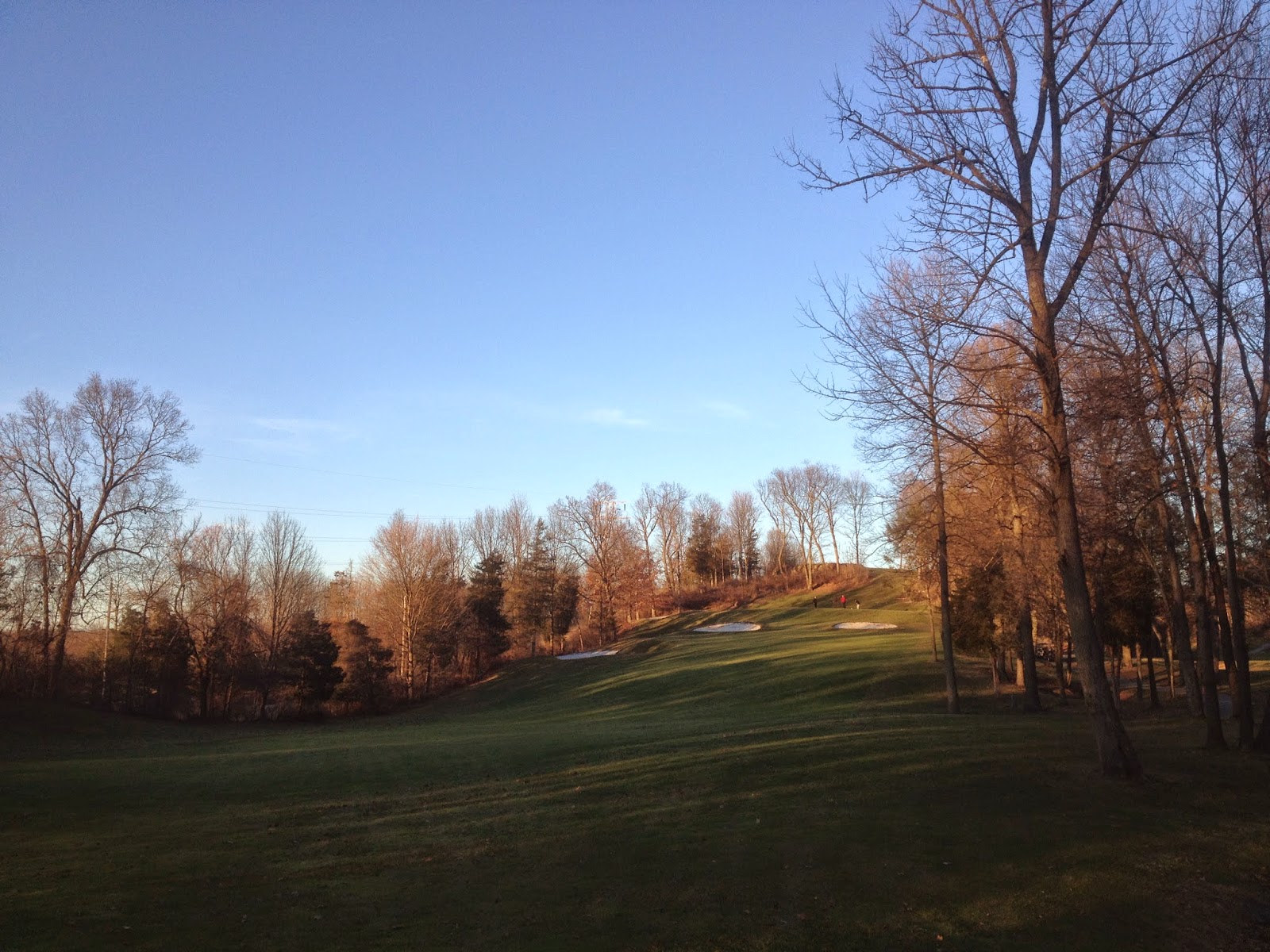 Next hole, back up the slope. I like this course but walking it is probably more trouble than it's worth. 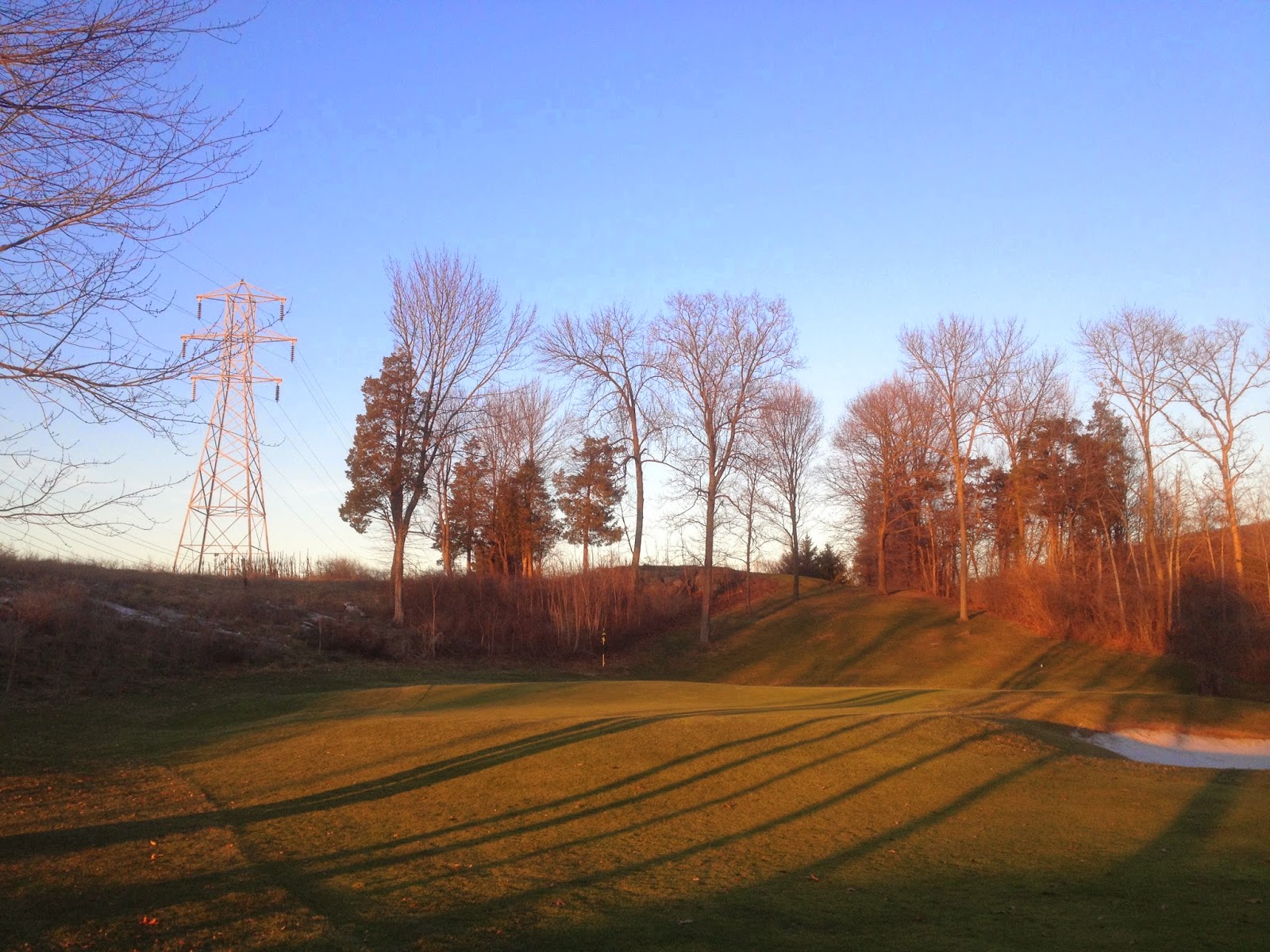 Twilight's upon us. With three holes to go, we'd better pick up the pace. 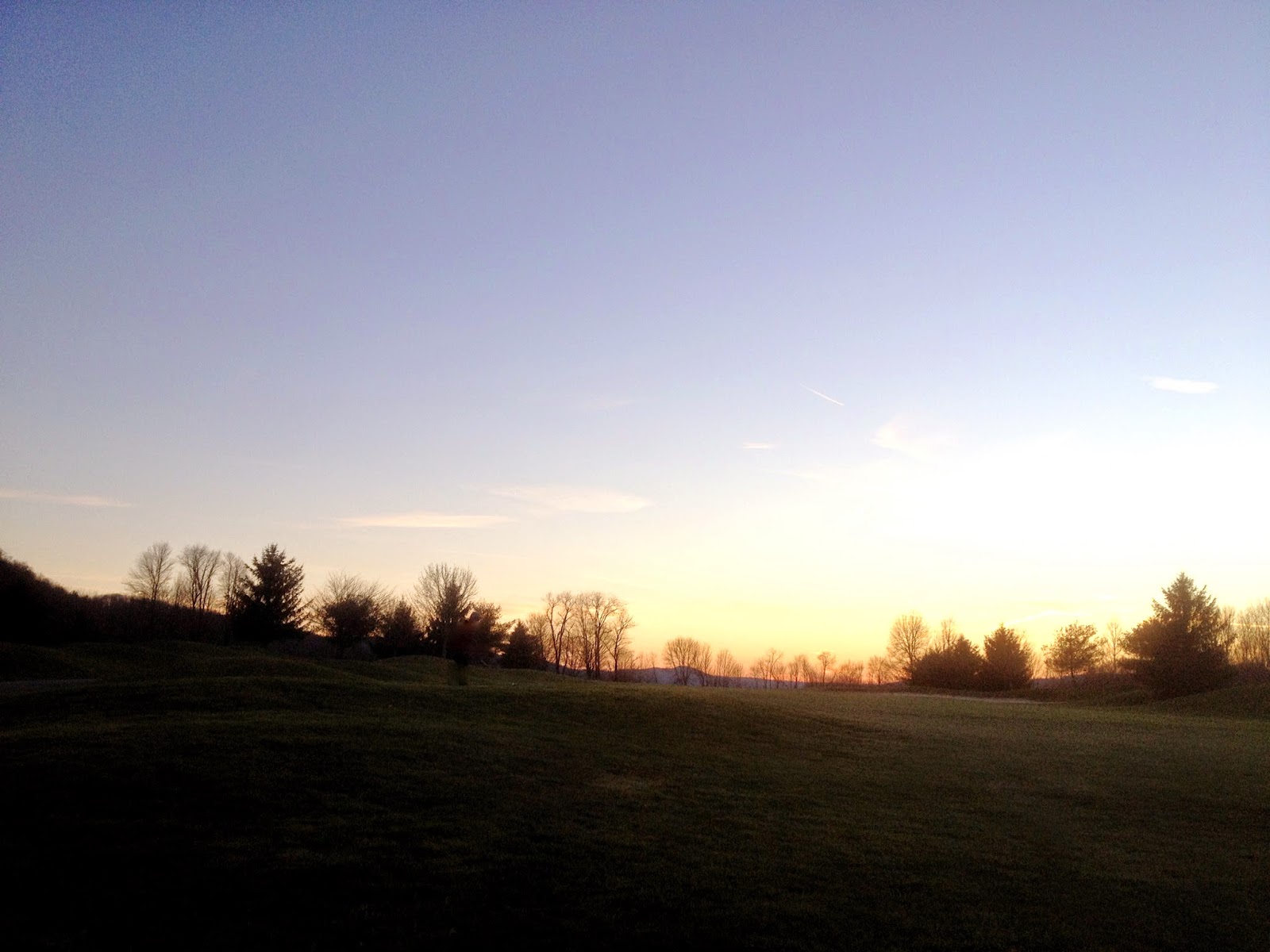 Hustling, we made it to the 18th tee as the sun set, a nice feeling. Even better after you've hit a straight tee shot, knowing it's safe in the fairway even if you can't see it.

Keeping with the theme of the day I hit the 18th green... and then three-putted. It was a banner round for me as I hit over half the greens in reg. But any satisfaction I might've felt about that was eclipsed by a exceptional display of ineptitude with the putting portion of the game. I am out of sorts; lately when I get the putter in hand I can honestly say that I am not quite sure of what is supposed to happen next. On the bright side my misses almost all seem to be well past the hole. You would think that to compensate for a very consistent miss such as this would be a simple matter. Let me tell you, it's not. What are you gonna do.

Black Bear was a nice course for our couples-golf needs. Again this was a fast winter round, so not much time to pause and look around but hey, we both had fun and at the end of the day, what more can you hope for out of a round of golf? Or life itself really?
Posted by Legitimate Golf at 12:02 PM