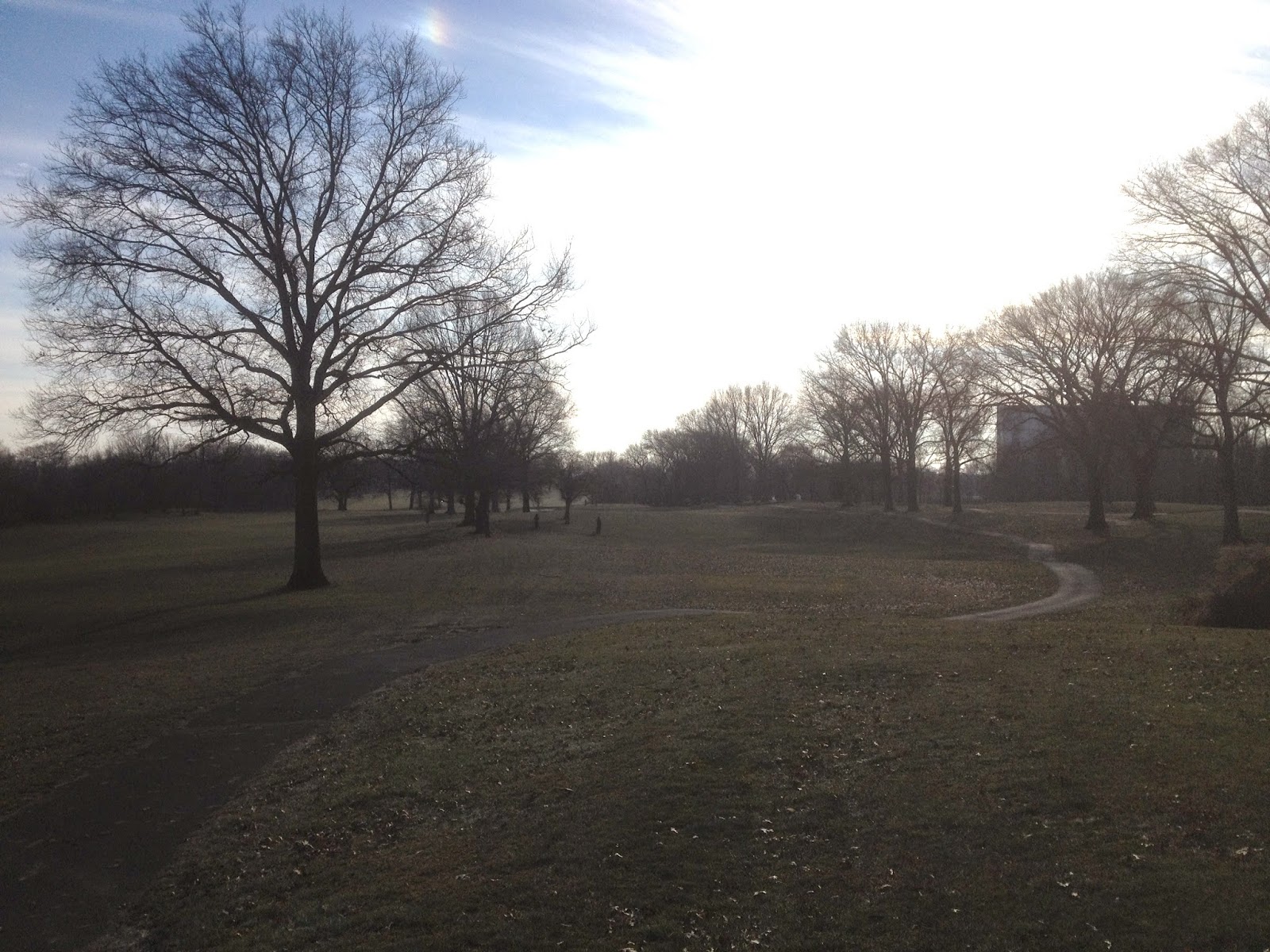 I tried to maintain a state of stoic denial as long as I could. I thought I would time-shift my last days of 2014-15 Wintergolf, spreading the posts out in a vain attempt to savor the final good vibes of the season. And so here it ends, most unceremoniously. 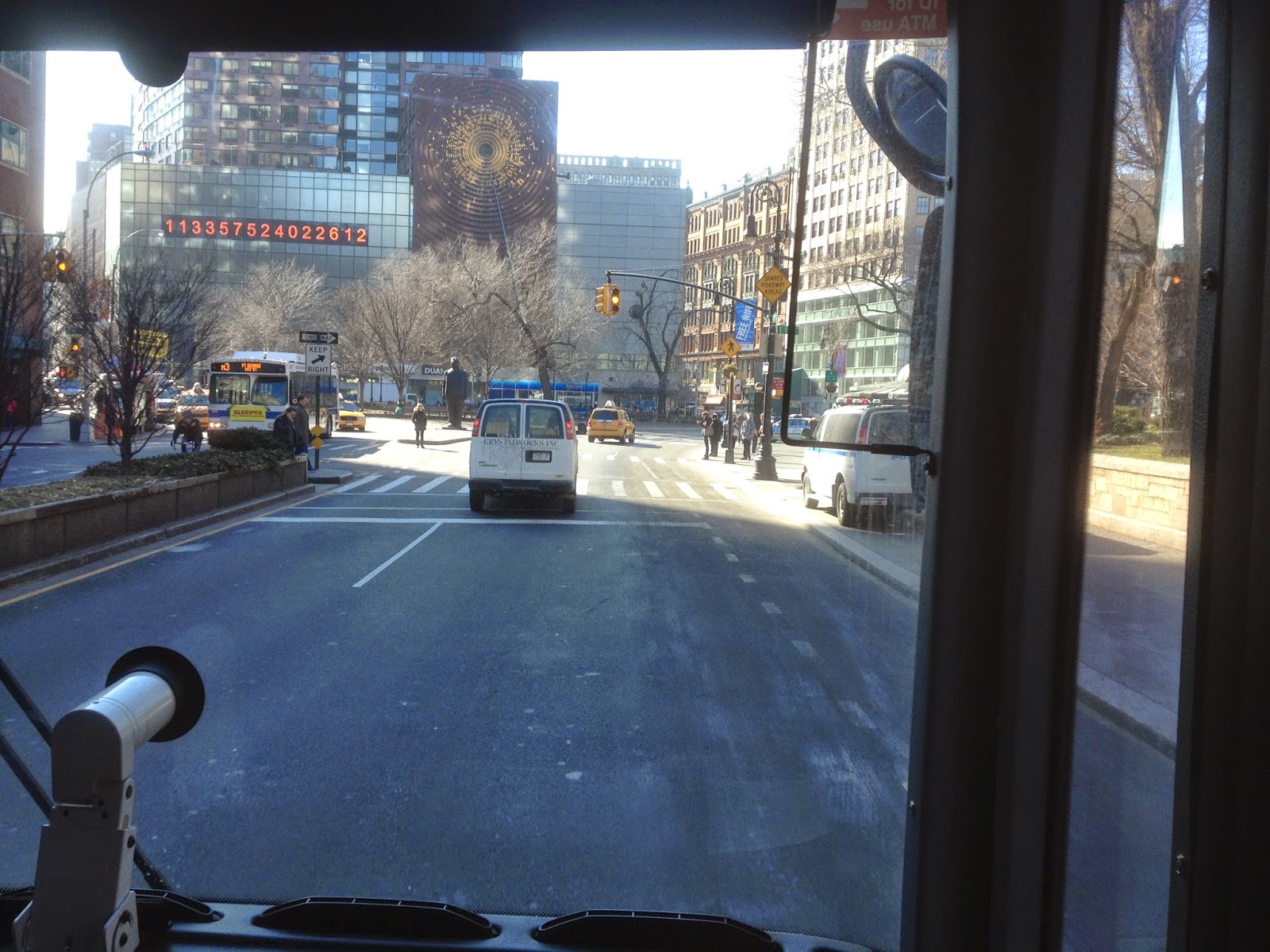 I snagged the frontmost seat of the express bus. That number readout is part of some sort of large-scale permanent art installation in Union Square, the word art being applied very liberally. The first digits represent the current time in hours, minutes and seconds, and the rest of them count down the minutes, seconds, tenth-seconds, etc. remaining in the day. Public art--what is it good for? 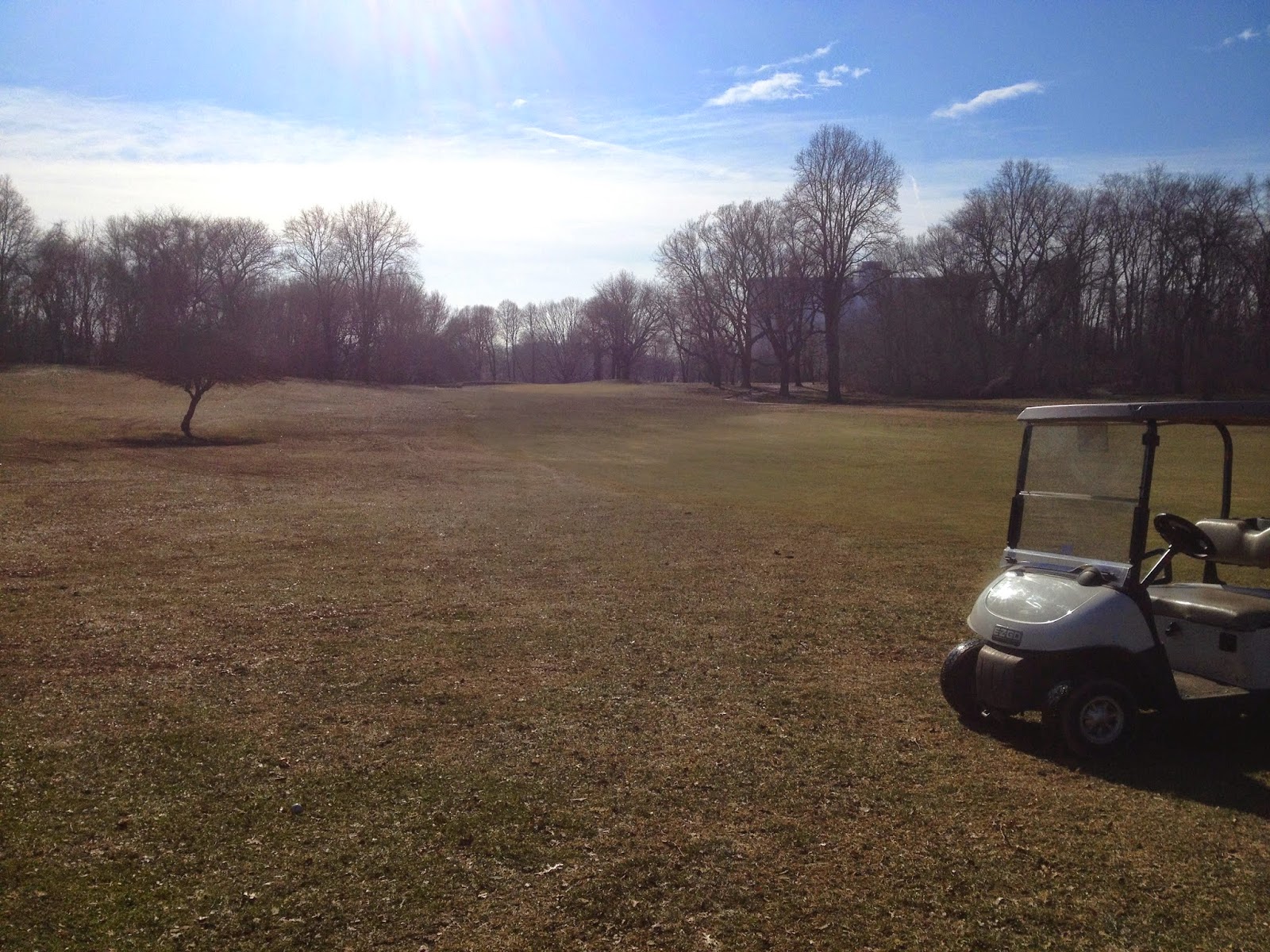 The thought of playing the same course for consecutive rounds is sort of mind-numbing, so I'm back at DBGC. Since this is the latter stages of a desperate eleventh hour wintergolf binge, I am a little weary from walking so today I'll be motorin'. Truth be told I am not even mentally golf-ready right now. I'm just here because I feel somehow duty-bound. 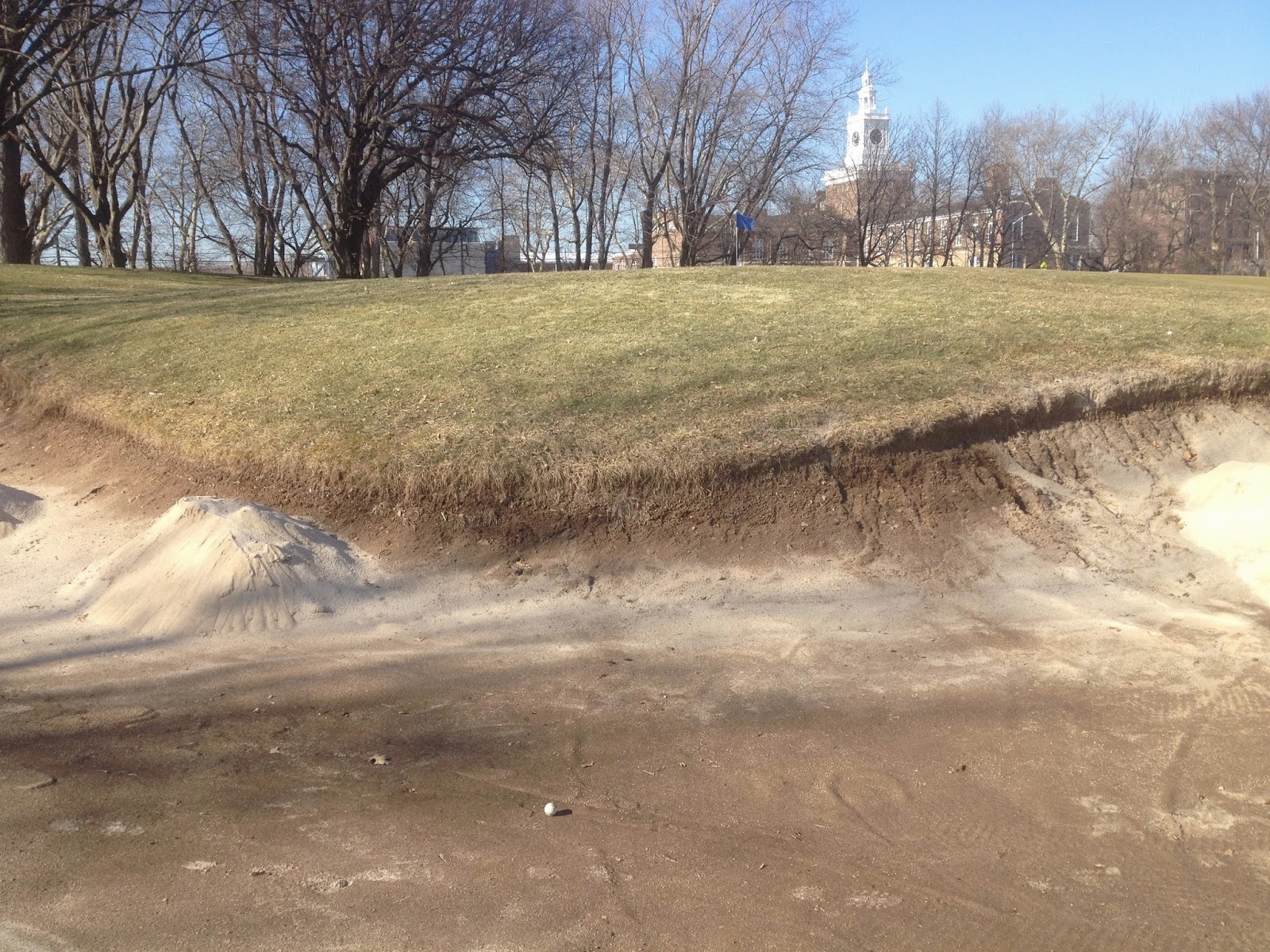 In the big picture, squeezing in one final jag won't make much of a difference now, will it? It will not make the span of time until the spring thaw seem any shorter. It will not better equip me to deal with the mental anguish and existential uncertainty that is sure to overtake me in the near future. But still there is an opportunity to play one more, both I and the weather are sound, and so to pass this up would be highly illogical. It would nag me for the entire offseason, probably. 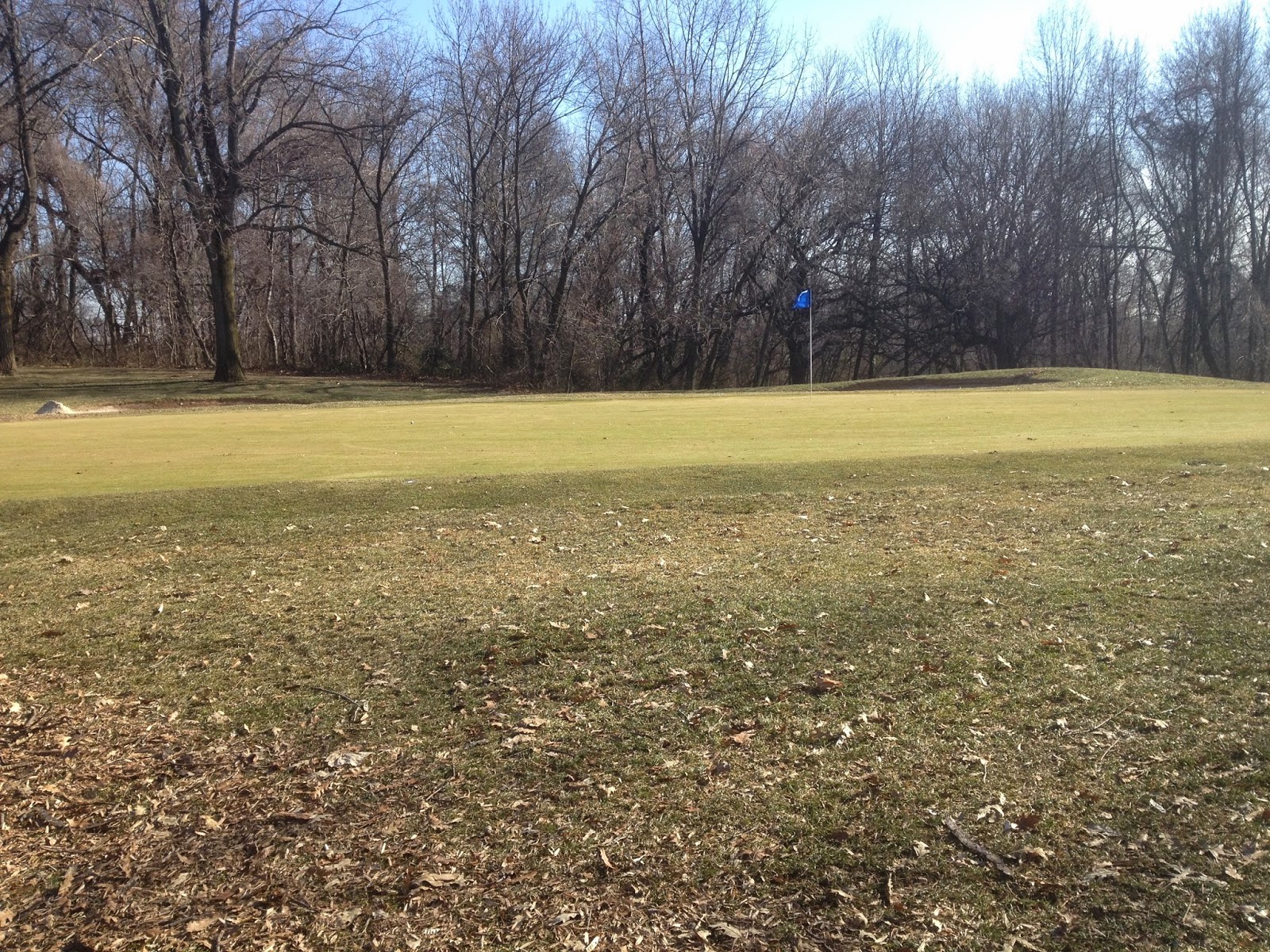 They don't come right out and say it, but these are the days of Play at your own risk, management assumes no responsibility, etc. At this late stage of the season, conditions have gotten really wild. But with a winter weather advisory in effect and a devastating storm en route, everyone knows this is the end and so despite the nippiness, the course is full. 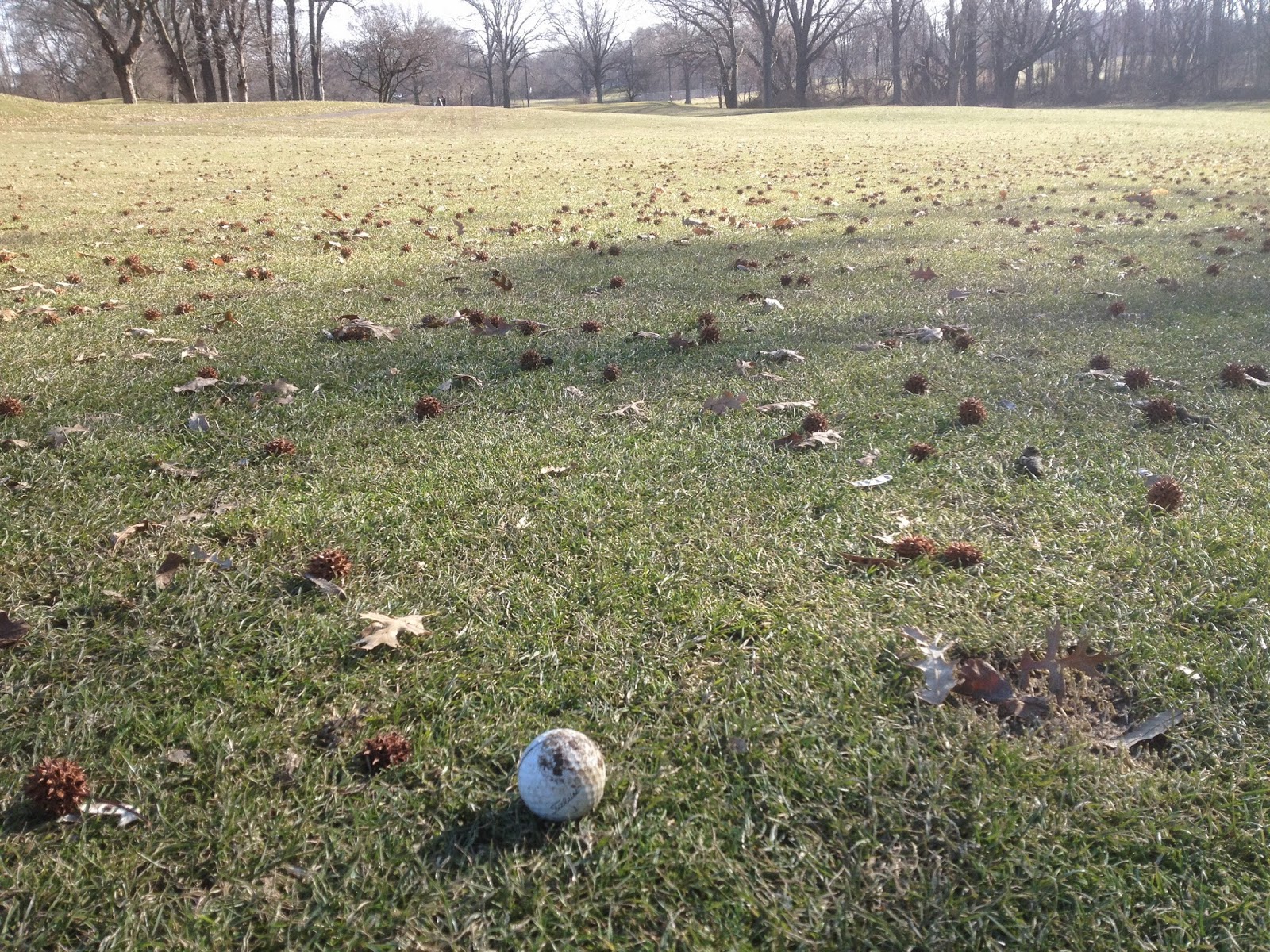 Playing at as it lies until the bitter goddamn end. 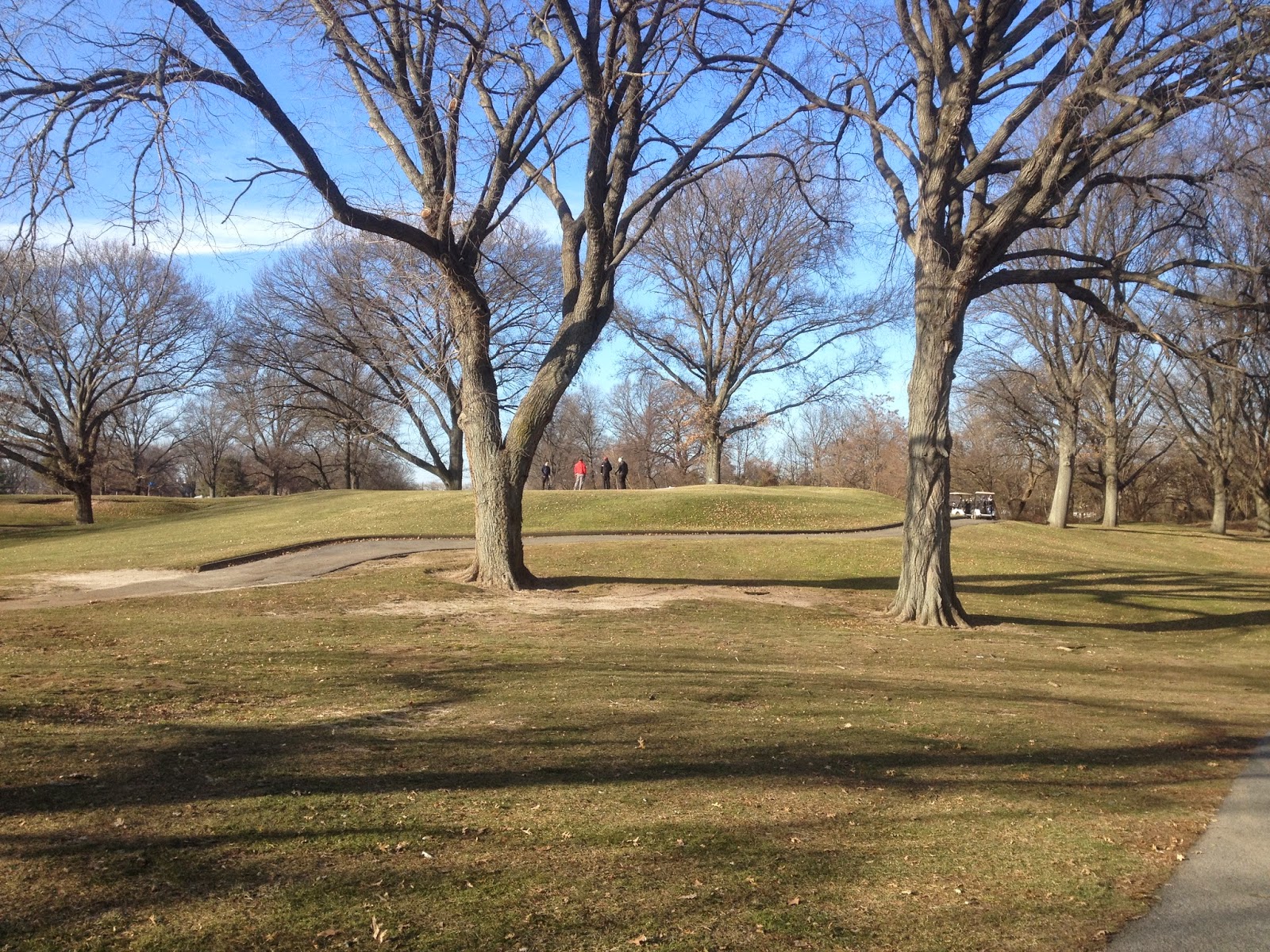 Legs are worn, but I'm starting to warm up to the round. Feeling grateful to be out here at all.

Coming down the stretch I'm cold, tired and ready to get the hell out of here. But not before grinding out one more quality hole, hopefully. I hit a good drive in the fairway and then made a clean, balanced swing with an 8-iron from about 140 yards. It made solid contact, started towards the flag and drifted with the wind to the middle of the green, about twenty feet from the hole. It's an uphill slicing putt, but one I've seen many times before. When it dropped in the front door for birdie I was surprised though--it hadn't occurred to me to try and hole it.

Goddammit, what a memorable finish. I broke 40 on the back nine and capped off the whole damn season with a trio of tidy strokes that I'll be replaying for the next few days. Or weeks.

On the 2nd hole, someone left a ProV1 in the rough, a few feet away from my own tee shot. In my freezing-cold haste I didn't pay enough attention, mistook it for my own and incurred the harsh double penalty stroke. That rankled pretty hard, but I contemplated it and the rule's both fair and logical. Face it, nearly all the rules are. That's why we keep coming back. That's why golf is the one game to rule them all.

Taking away those two penalties, I shot the same number of strokes over par as the previous round. For a preteen handicapper in these conditions, I think that's mighty alright. There were some tedious moments trying to cram these final rounds in, but the gameplay itself has been all fun. Standing at the threshold, the proverbial door about to be slammed in my face, I seem to be playing better golf than I have maybe ever.

And that's what's going to make this upcoming forced offseason nothing short of the most grueling of my entire golf-life, most likely. Stay tuned.
Posted by Legitimate Golf at 7:02 PM