Ms. L and I attended the third round at Westchester. We followed the final two groups, which included Hall of Famer Karrie Webb, Korean rookie sensation Sei Young Kim and the queen bitch herself, the one and only Inbee Park. (I happened to be in the area Sunday, and happened to have a free ticket, so I couldn't resist going back by myself to watch some of the final round.)

It was a a real privilege to watch Inbee Park at work, especially on the greens where she reigns supreme. Her bearing is regal; she strides down the fairways like she owns the whole place. Speaking of fairways, she drove her ball down the center line almost every time. The entire weekend, I don't think she really ever strayed from that center line.

We considered ourselves lucky to witness Inbee's masterful third round 66, which is essentially where the tournament was won. What we saw was actually was more than a tournament win--it was also an epochal change at the top of the women's golf rankings. The way her game looks right now, it could be a long time before someone catches her.

After seeing her in person I am convinced that Inbee Park is not just a really good player, but an icon of the game. Books ought to be written on the way she plays golf. More than any other pro on earth today, she's a role model for the average golfer, anybody who wants to get more out of their ability. For my part, I feel like my game has improved just by being there, watching, touching the hem of her golf skort (not literally obviously).

Sei Young Kim won us both over with her happy-go-lucky demeanor as well as her astounding swing speed. She is tiny enough that she could disappear behind her golf bag, yet there is nothing cutesy or diminutive about the way she plays. It is a full-bodied, big-boy golf game. Pound for pound, she has got to be one of the longest golfers, men or women, on the planet. 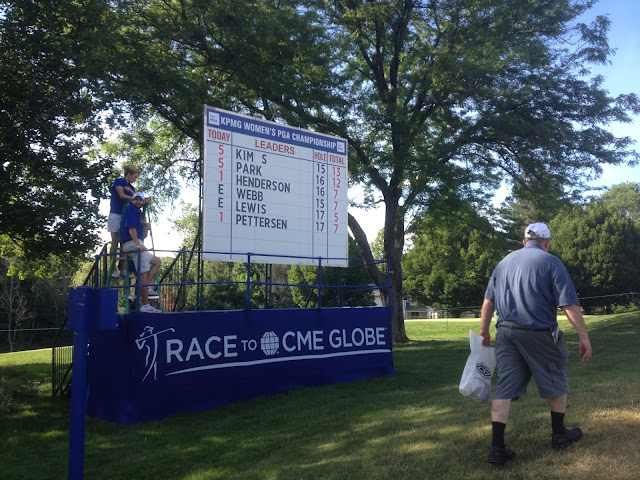 Since the weekend rounds were broadcast live on NBC, here was a golden opportunity for me to yell out assorted nonsense after the players hit their shots--just like enthusiastic spectators do every weekend at PGATOUR events. But this kind of acting out doesn't come naturally to me, so I chugged three beers to get myself into the proper state of mind. I yelled words of support for Inbee, and for poor Ms. Kim, who was getting no support whatsoever from the crowd despite playing some high-quality golf all weekend long. Some of these shouts did air on NBC, I can report.

As the leaders teed off on the 12th, I got out a clean "Legitimategolf!" after Kim's drive. But it didn't make the broadcast due to commercial break. I was crestfallen at first, but then reality set in. Even if my self-promoting buffoonery did air, even if this was a live, national, possibly international broadcast, it's still women's golf we're talking about. If a tree falls in the forest and there's nobody there to hear it, does it still make a sound?

On the 18th tee after Karrie Webb teed off someone yelled "Bababooey!" It may or may not have been me. I will say that my companion was mortified. But I explained that it was okay since it was said ironically. Give me a break here, I was just trying to bring some of the party atmosphere of men's pro golf to the women's game. Equality, you sons of bitches.

The Korean takeover of the sport continues toward the point of inevitability. I believe they are excelling at all levels of golf simply because the game is still new and fresh to them. They possess an enthusiasm that cannot be contrived or manufactured, no matter how many initiatives are launched by the USGA, PGA of A, et al. Americans can talk and talk about what needs to be done to invigorate our interest in the game, but in the end you can't go against nature and evolution. We are currently in the process of phasing golf out of the fabric of American society. The Koreans are busy weaving it into theirs. They treat their elite pro golfers like pop stars, and not as part of some contrived effort to grow the game or whatever, but simply because they're excited by this dumb game and all its possibilities. Over on that side of the world, golf is a hip thing to do. It's of the moment, and the future too. Let's face it fellow Americans: this is their world, we're just living in it.
Posted by Legitimate Golf at 2:36 PM