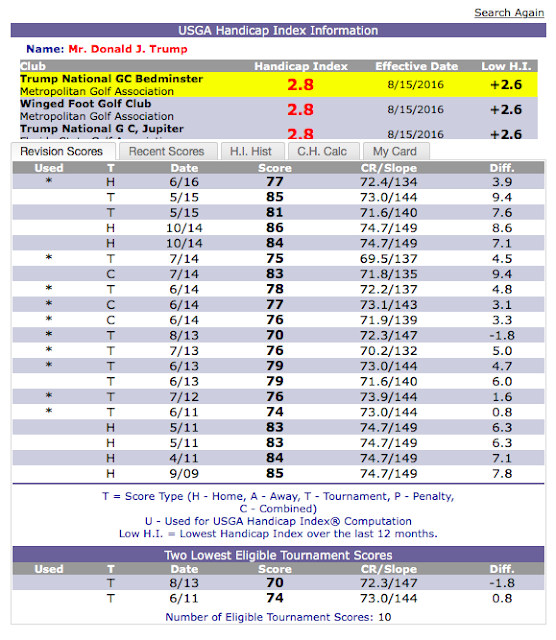 He may not be willing to release his tax forms, but thanks to the providence and foresight of those other founding fathers—of golf in the USA that is—Trump’s USGA handicap is indeed a matter of public record.


2013 until mid-2014 was a tremendous period for Donald Trump’s golf game. During this time he achieved some remarkable consistency and maintained it for a long time, while playing in a bunch of tournaments no less. For a solid year and a half Donald Trump never shot above 80. That’s very rarefied air for recreational golfers and Donald Trump was breathing it in 24/7.

Alas, 2016 has been a busy year for Donald Trump, probably the busiest he’s ever been in his life. As with your typical Average Joe, a hectic work schedule seems to be reflected in his golf handicap card. To date, just one lousy round this year. At least it was a good one though, a solid round of 77.

But are we sure that running for POTUS is really what’s behind this sudden shortfall in handicap scores? In fairness it’s worth considering also that the USGA’s new handicap rules for 2016 could have affected Donald Trump’s handicap reporting, as it has for many others. Perhaps he is simply the kind of golfer who prefers playing as a single.

The real story here as I see it is the current 2.8 index. As someone who is presently struggling to get balls off the ground I have to say that’s an impressive number—for any self-taught golfer, never mind a doughy septuagenarian who’s in the midst of running for the office of POTUS while also managing a vast business empire. My jealousy as you might guess is probably outweighed only by my skepticism.

Fortunately thanks to that public record known as Youtube, the swings of many a prominent hack golfer are also out there for our perusal. For those of you who might question Donald Trump’s true golf ability I was able to scrounge up this grainy 2nd generation bootleg video clip, which features a decent-sized sampling of Donald Trump swings and putts as well as some commentary from a well-known golf teaching pro.


Three handicap? I guess that, as with many other matters of varying importance, will be up to us the American people to decide in the next couple months.
Posted by Legitimate Golf at 12:41 PM