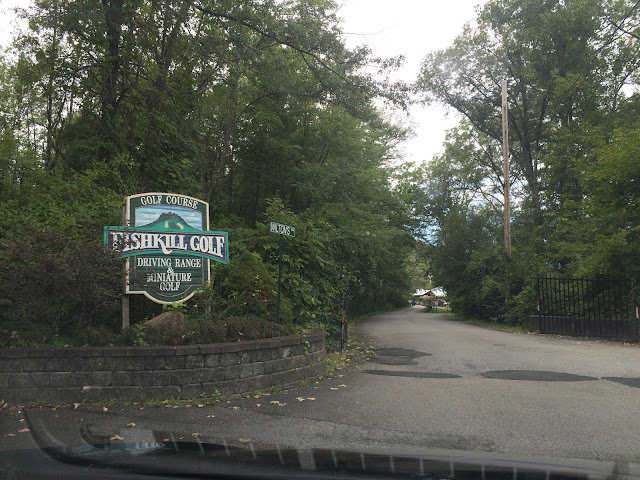 These are strange, wondrous times we live in. Back in the analog era, you didn’t just hop in the car and drive for hours to some strange area without a specific idea of what you were going to do once you got there. You had to plan. Make calls. Unfold maps.


Those days are over. Now you just throw the clubs in the car, pick a general direction and go. As long as there’s civilization around, you can usually find some sort of golf facility within reasonable distance. I’m going to show a little bias here in saying this but America is truly a wonderful land of plenty. And are there any bigger beneficiaries of her bountiful bosom than us, the Golf-Americans?

Ms. L had designs on visiting an art museum up in Dutchess County, about an hour and half up the Hudson. I decided to tag along, not for the museum (uncultured clod that I am) but rather hopefully to find me some ramshackle mom’n’pop driving range where I could camp out for the day. So I fired up the internet and sure enough found a little driving range-cum-executive course a few minutes away in Fishkill. 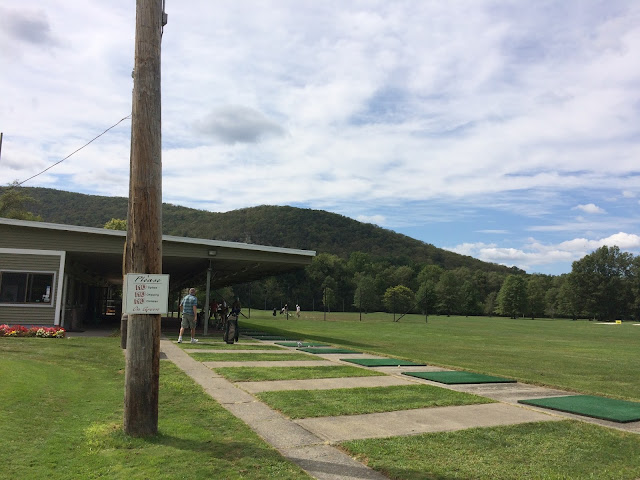 It’s a relief to find out that the root -kill is merely a derivation of the Dutch word for ‘stream’ and unrelated to any raw brutality that might be suggested to English speakers by names like Fishkill, Catskills, and the especially horrifying Freshkills, which by coincidence is the site of an famous landfill in Staten Island. 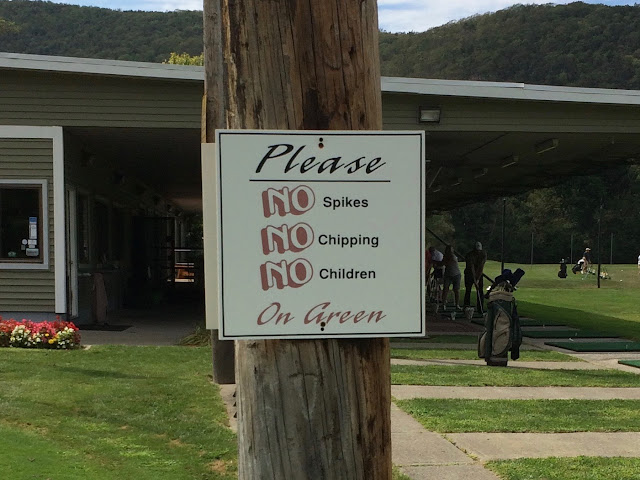 In 2016 we like to believe that we've moved past our racist, sexist, ageist discriminatory tendencies, that we've all agreed that the children, as the song goes, are our future. So it's startling to see a sign like this. It feels like something out of Jim Crow. Ah well, what can you do. We are not in the city anymore, and maybe the values are different out here. 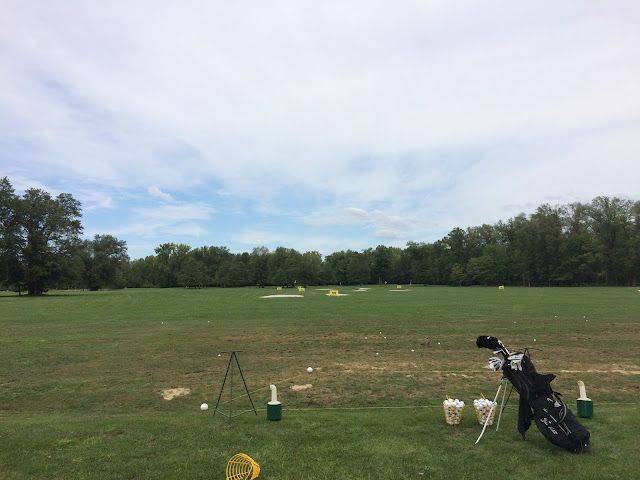 I'm delighted to find that Fishkill GC&DR is a proper golf improvement facility for any serious student of the game, complete with a big-ass open range... 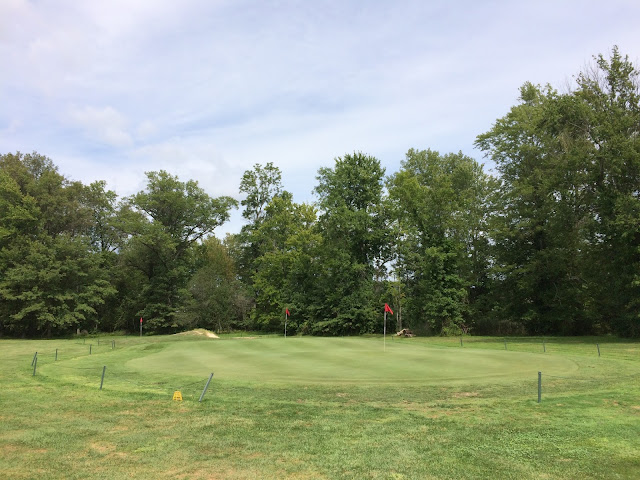 ...and putting, chipping and bunker areas that are as well-conditioned as you’d find at plenty of douchey upscale courses. 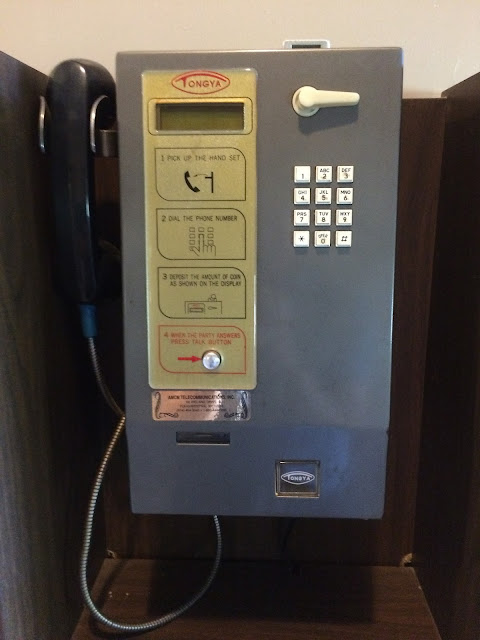 Crazy old payphone I saw on the way to the head. 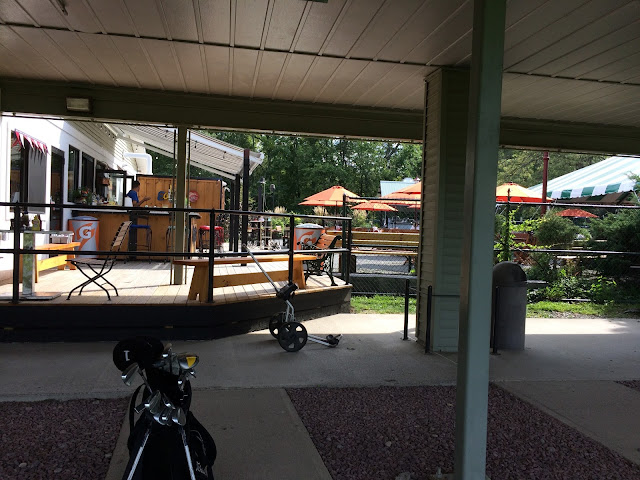 With the purchase of any bucket here you get the choice of hitting out in the open off the grass tees, or off mats from under the shade of the roof. Or even better--both!

They also have a full bar and grill complete with mind-boggling array of beers on tap. The hot dog I had was burnt and came with way too much bun, but the Lagunitas IPA was excellent. 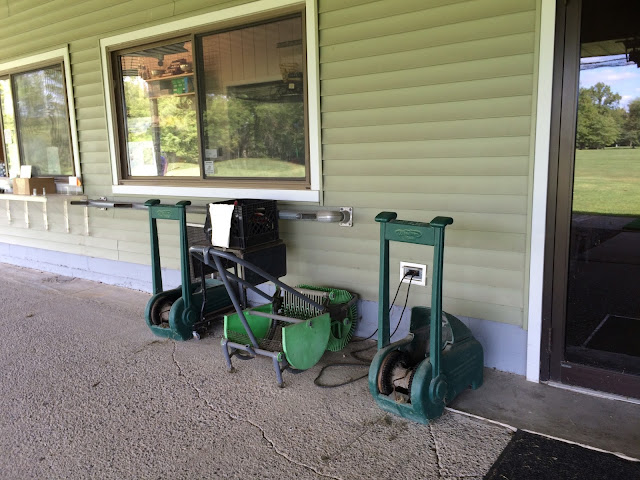 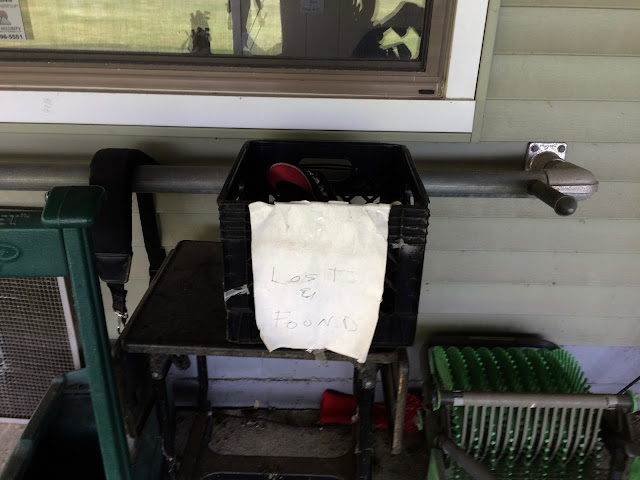 This lost-and-found box reminds me that I am in a kinder, more civilized part of the world (blatant ageism notwithstanding). Sadly such things simply do not/cannot exist in the dog-eat-dog world of ghetto golf. 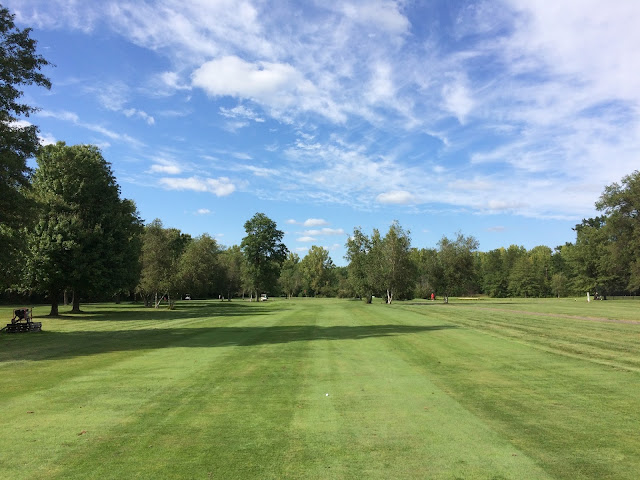 A few hours later Ms. L finished her museum trip and came back to pick my ass up. The first tee was open, so we made the easy decision to try out the 12-hole course. 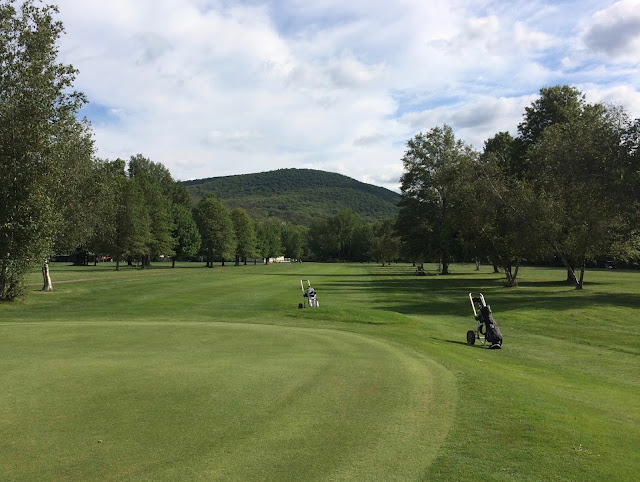 We opted for the rental push carts, a steal at $2. Some courses back home offer them, but at twice the price and they don’t always include a handle. 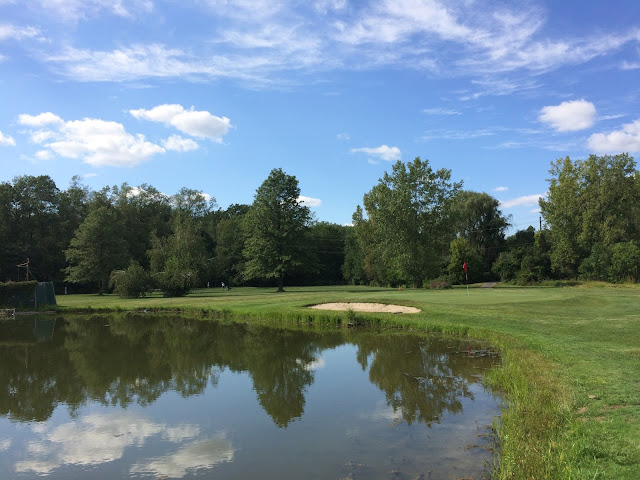 I haven't seen any putt-putt courses on premises, so I am assuming that the "miniature golf" advertised on the sign out front refers to this. It makes perfect sense. This is scaled-down golf, everything's a little smaller. 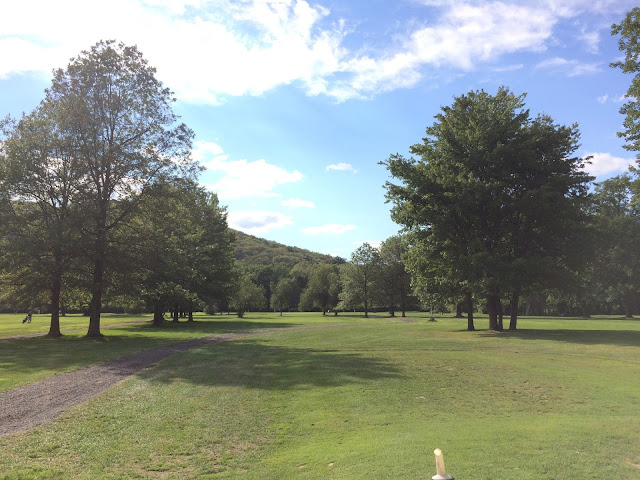 2/3 scale to be exact. Here we are finishing up on the "front six". 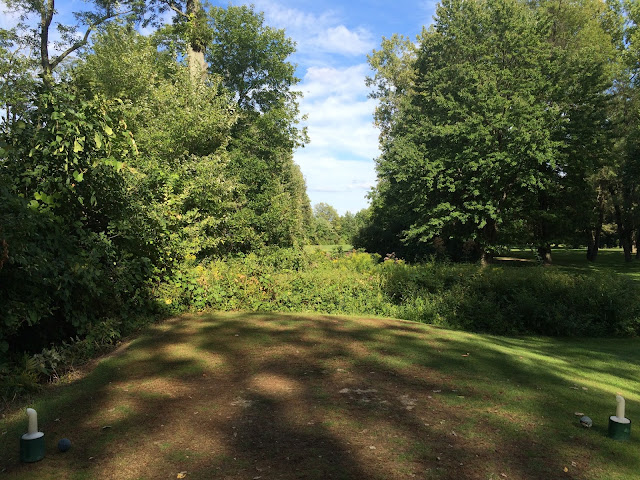 We're strolling along having a nice leisurely time and then out of nowhere this insanity appears, the par 4 8th hole. 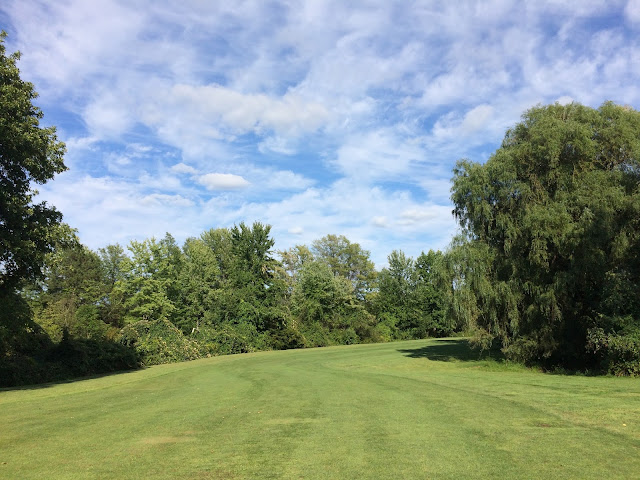 Which, due to its extreme tightness and an unusually placed dogleg about a hundred yards from the green, makes it one of the toughest holes I've ever seen, anywhere. I made a 9 while learning a valuable lesson in the perils of prematurely declaring a ball to be lost. Just because it looked like it was headed straight for the woods, doesn't mean it went all the way in. Sometimes, balls can bounce off trees, and right back into play. Deep thoughts huh. 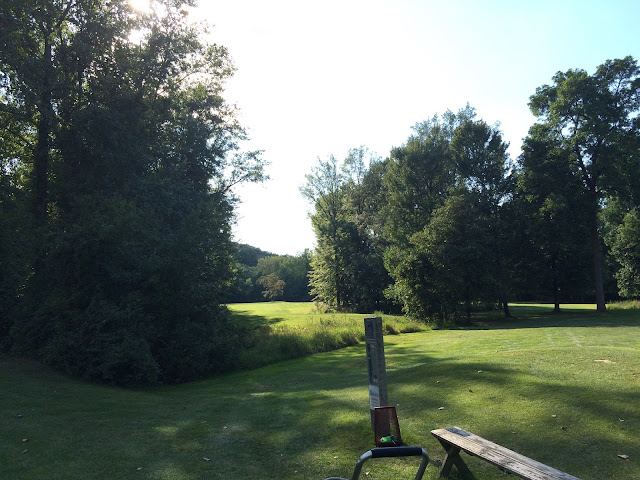 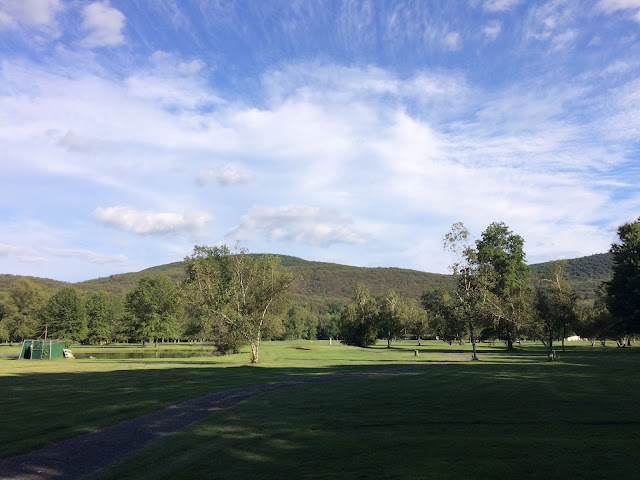 It's a decent little track on which to goof around and play some light-hearted, low-stakes golf. 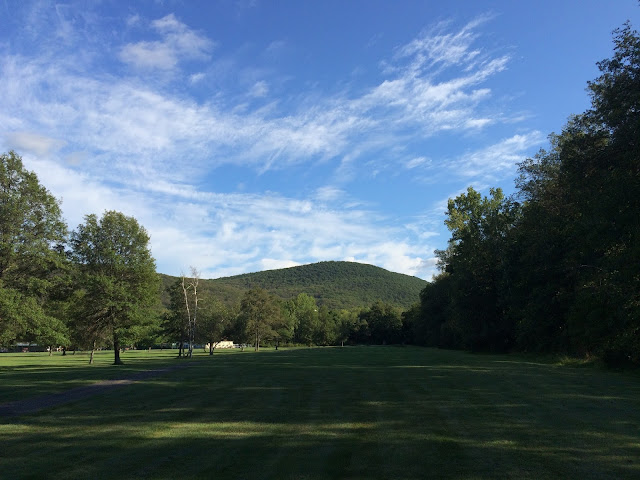 Goddammit I am refreshed. This was a great day of golf even if most of it was spent whacking at range balls and making practice swings. I got just the kind of peace and quiet you drive out to the country for. And I practiced, hard. So much easier to concentrate on stuff out here than back in the city. Which is maybe less a compliment to places like this and more a damnation of the golf-forsaken hell hole that I call home.

Still I have to say, I've rarely been disappointed anytime I’ve sought out golf experiences out in Rural America.
Posted by Legitimate Golf at 3:53 PM