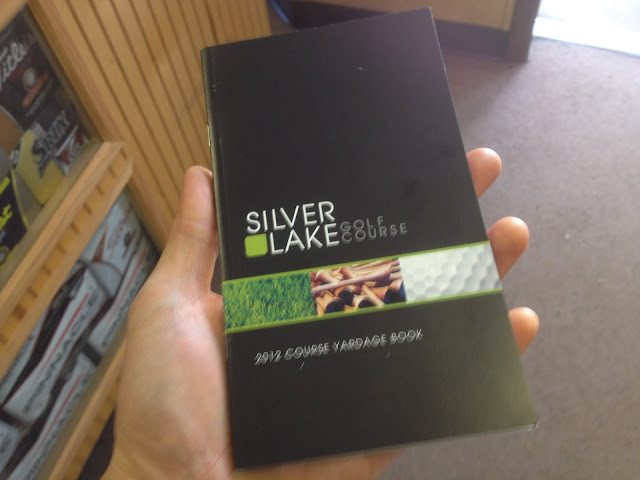 Kind of a weird start today. First, I noticed these yardage books stacked behind the scorecards in the pro shop. I freaked out at first thinking it was some cool new thing, but I was chagrined to see that it was at least three years old. I've been playing here all this time without knowing the damn thing existed. 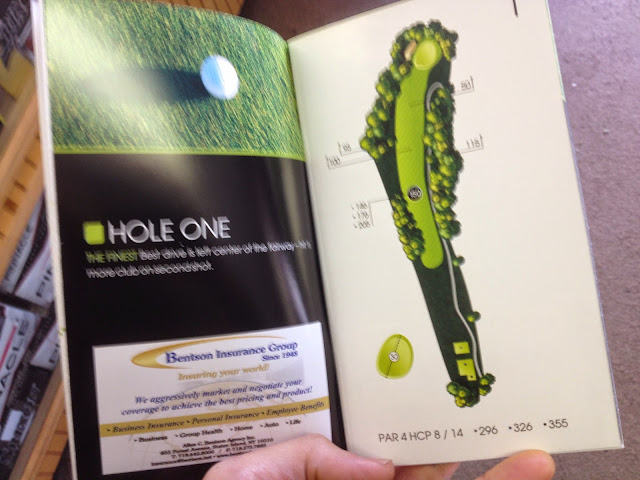 No hard feelings I guess. I'm glad to have this booklet handy. I used it today, and I'll take it home and write in some notes and more measurements. It's going to be awesome.

With the front nine jam-packed, the starter dispatched me out to the 11th hole to start my round, where I would join up with another single he had just sent out there.

I drove up as the guy was teeing off. It was plain to see that he was a rank beginner, equipped with a department store box set of clubs and a really bad swing--looked like he was actively trying to pivot backwards, while flicking the club forward at the ball. With the putter he would crouch, wielding it like a hockey stick. He was neither in the know about, nor concerned with basic etiquettes. 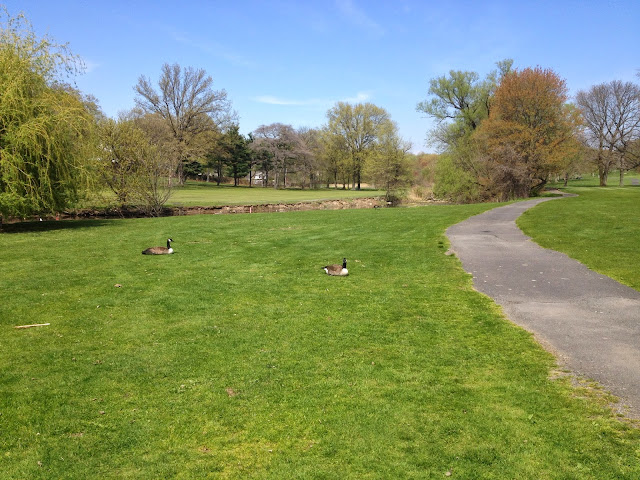 Making a bit of small talk the young man confirmed that he was in fact a beginner in year one. I asked how he'd gotten started and he said he just bought some clubs and brought himself out to the golf course. No driving range, no mentoring friend, no instruction books, nothing. He seemed to pride himself on his gumption. That takes some nerve, I'll give him that. But considering that he seemed to be an otherwise respectable, educated person--i.e. someone who should've, especially in this Google age we live in, known better than to come out to a golf course without at least some clue--I soon lost interest in his whole deal.

If you were thinking this is all a preamble to some convoluted excuse for my not playing inspired golf on this day... you'd be wrong Jack. I've been around this ghetto block too many times now. I honestly believe that I've played with some of the worst random jackoffs in the entire history of golf, possibly humanity. Admittedly today was not my favorite pairing, but if anyone's gonna blow up my score with their nonsense it's not going to be some balless, no clue-havin', year-one newbie. That is my guarantee to you.

Anyways with eight holes to go I seized an opportunity and told him this is where we would part, citing a gaping wide open course that lay ahead of us, and my need to get out of there quickly as possible. I might not have actually said I had something important to get back to, but pretty sure my tone implied it.

At that time I was nine over par through ten holes. To break 80 today, I'd have to par in. Now freed from distractions, I was up for the task.

Some passable golf ensued over the rest of the round, but sadly it looks like I'll be stuck on the Island for another week yet. (If you are just joining us now, I've challenged myself to stick it out on this one course until I break 80.) Some good signs though and consistency seems to be gathering. Soon I'll be free. I can feel it.

My pitching's improving thanks to some better technique and, let's face it, some nicer turf conditions. I also holed three long, bending putts, which going forward I am going to take as proof of my inherent, explosive awesomeness with the putter. You see, in putting, good technique only gets you so far. Even determination only gets you so far. You also need some arrogance, sense of superiority over your fellow man, and possibly even a sense of divine right. When it comes to pumping up the old ego out on the greens I don't think you can really go too far. 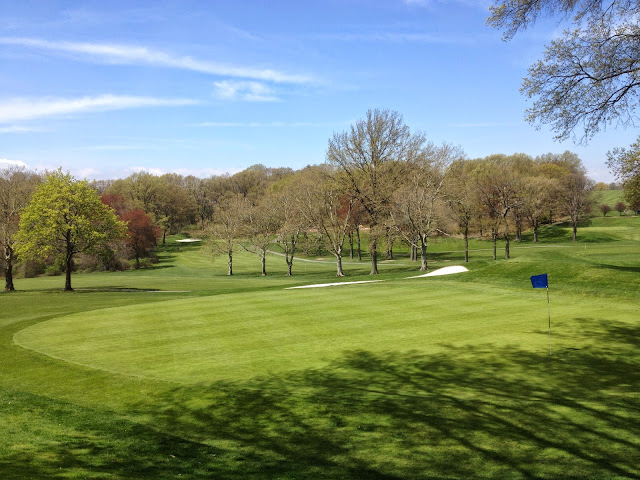 Without even playing that great it still felt like I left at least eight shots out there. Which means I should be marching in there and aiming for something in the mid 70s instead of trying to sneak inside some cutoff line like a weasel. I am so looking forward to the next attempt--and punching it in the face. Especially as I could really use some change in worldview about now, like going out to Marine Park, and even Dyker Beach. This could be getting serious.
Posted by Legitimate Golf at 10:00 PM