I’m currently in the thick of off-peak season, so what an odd time for me to be attempting golf at one of the hardest courses in North America. But it was an occasion I couldn’t pass up. Recently I found out that I have a cousin once-removed who’s a high school golfer in Southern California. He’s potentially Ivy League material, and so now that school’s out for summer he’s flying into NYC to check out a few universities here in the Northeast as well as attend a little pre-college golf camp.


I’m now a proud “member” of the Bethpage State Park Golf Course Telephone Tee-Time Reservation System, so I was able to secure us a noonish tee time, a full week in advance—a perk of being a state resident. But only the Red course, not the Black. I had tried, but I guess I didn’t yet know how to work that ancient phone system fast (or hard) enough.

Every day I kept calling back and checking for cancellations. Calling and checking. It’s easy to do once you’ve programmed your brain with both your nine-digit ID number and the specific sequence of numbers and pound signs that gets you to that robot-voice message you want to hear:

“PLEASE WAIT,
WHILE I SEARCH
FOR THE BEST AVAILABLE TEE TIME”

Thursday night, two days away from tee-off, I called some more.

“THE BEST AVAILABLE TEE TIME IS:

I freaked out for a second. But I pulled the trigger; I had to. It’s just a tee time, why the hell not? From what I had been told, Cousin’s serious about his golf. So whether he has fun or not it’ll be a more interesting experience to have played the Black. No disrespect to the Red course of course. It’s just that the Black is major, and it’ll be on the TV in the next few years as the host of several big-time events. 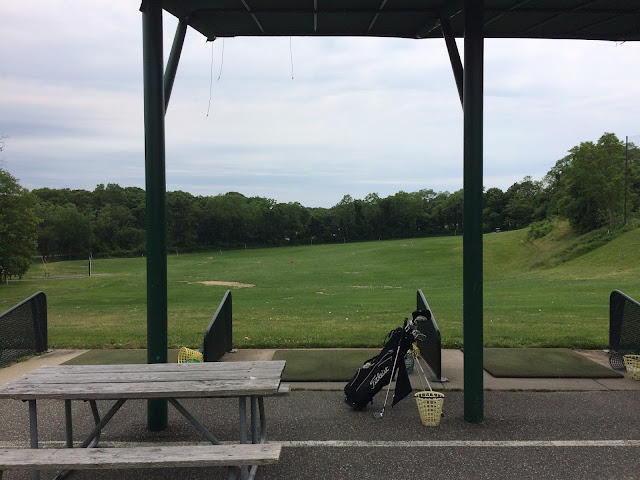 The State of New York requires you to check-in no later than one hour prior to your tee-time. Which seems like a long time but actually isn’t. Between putting on shoes, acquiring some grub, and splitting a bucket at the range, we had to hustle to the first tee and didn’t even have time to roll any practice putts. 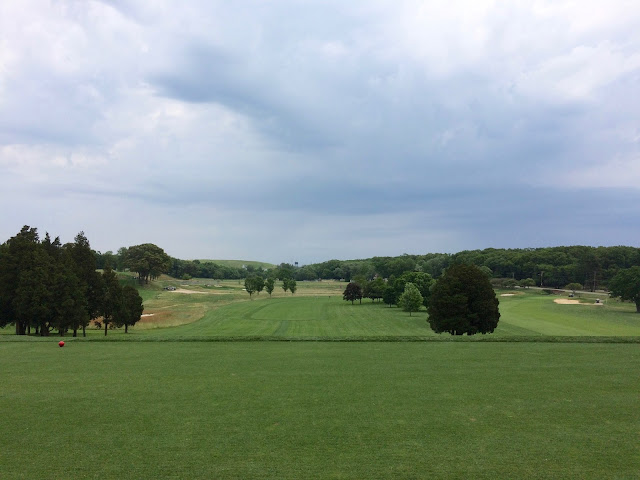 The view from the first teebox. Used to freak me out but now it's not so bad. As far as tee shots on this course go, this is one of the more benign. 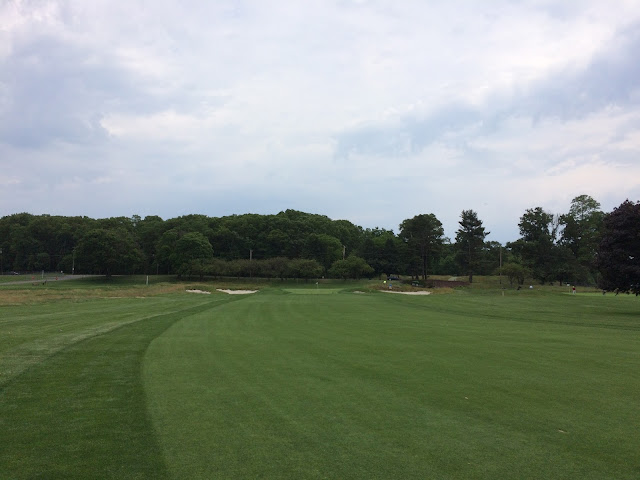 I’ve played the Black twice before. The first time happened back when I very ignorant of how bad I actually sucked; I had such little knowledge of swing mechanics but full of blind confidence, I managed to break 90. It was a fun time. The second round, years later, I was still quite ignorant about why I sucked, and this time not full of confidence but self-doubt. I failed to break 100, and it was laborious.

This time around I might better understand the nature of my suckage, and while I might be able to produce random squirts of confidence here and there while hitting balls at the range, I am a stranger to the golf course lately, unaccustomed to managing a single, non-disposable golf ball. That’s what makes me nervous about what’s coming. 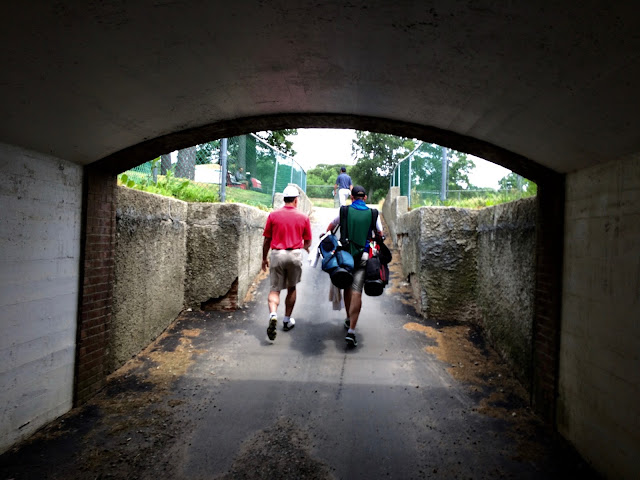 What do you know, this is my first time playing with a caddie. Okay so it was someone else’s caddie but hey, it’s a start. Actually both singles in our group were employing the services of this kid, who's from Ireland and spending his summer looping at Bethpage. He was a very good caddie. I have to say it was nice hearing someone give out yardages and putting reads with an Irish accent. Really adds to the ambience. 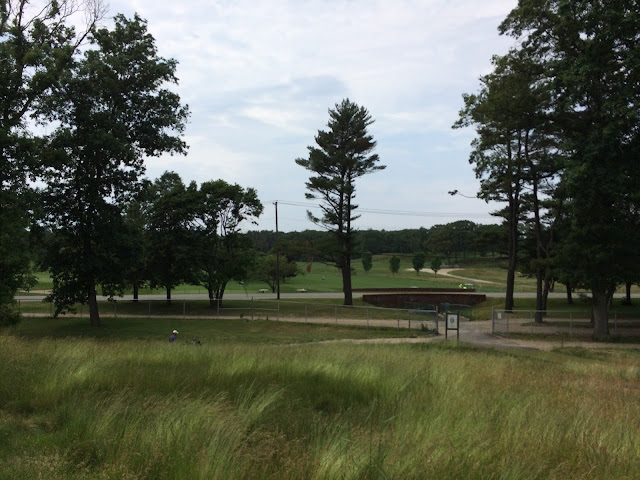 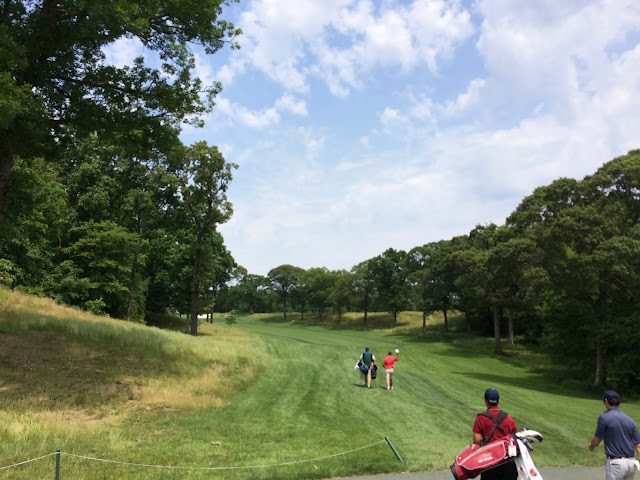 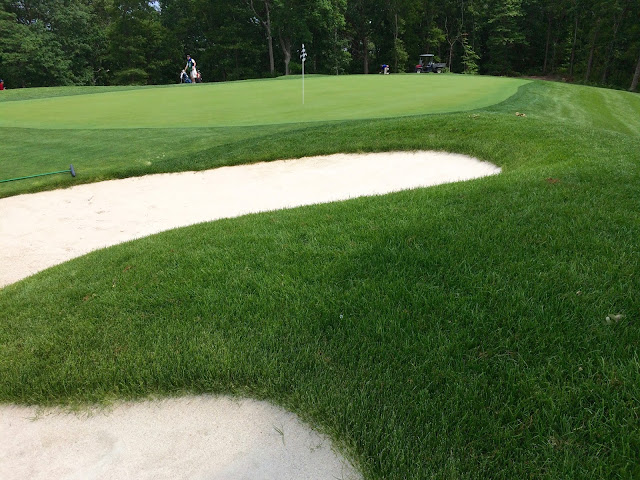 A good example of Bethpage Black's famous thick roughs. (My ball is barely peeking out near center of frame.) 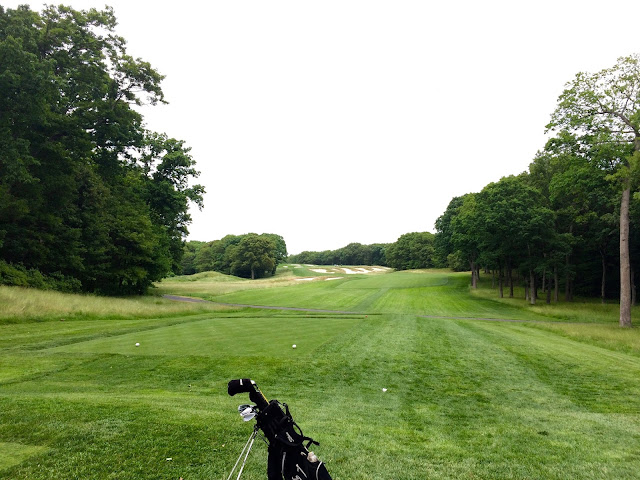 The monstrous par 5 4th hole, where I lost my grip on reality and made a 10. 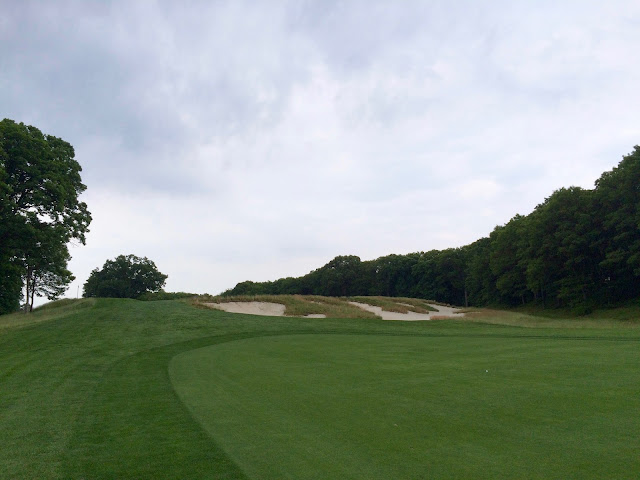 I shouldn't have been taking photos at this moment. I should have been looking for my golf swing. 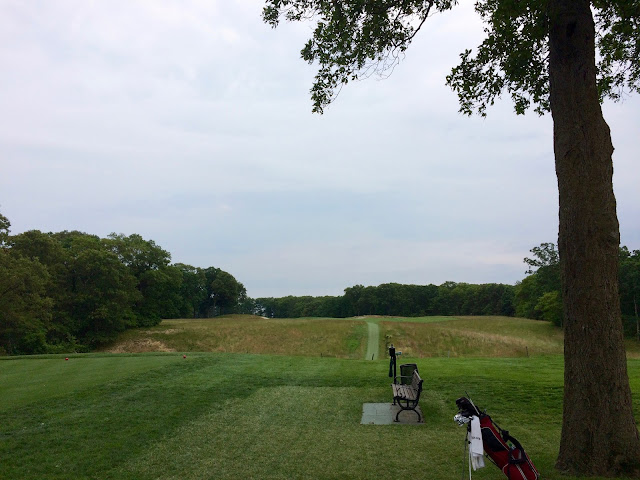 6th hole. All you can really see is fescue. There's a bunker off in the distance, I guess you're supposed to aim at that. 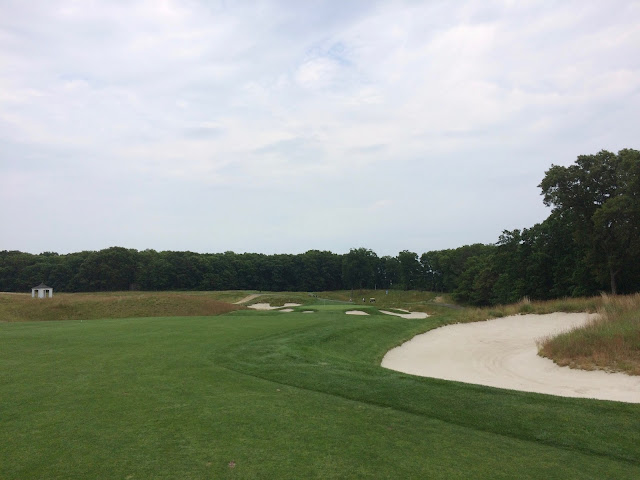 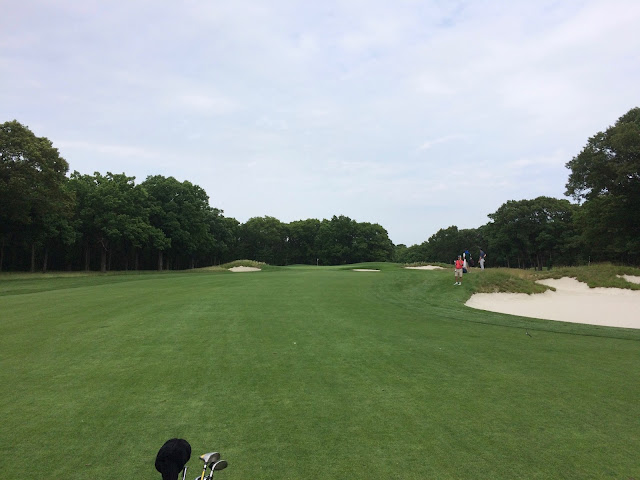 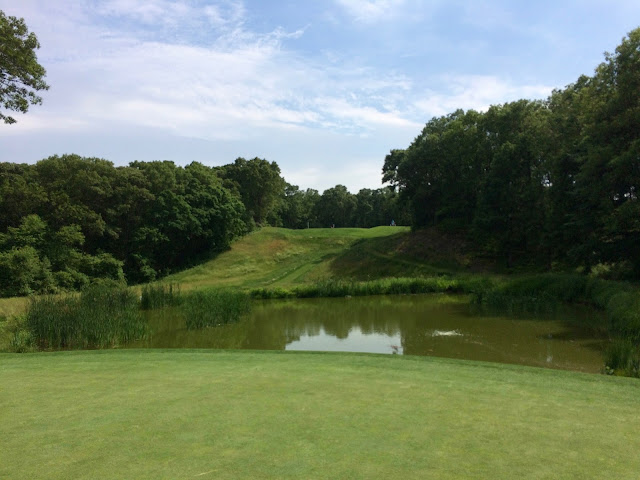 Looking back at 7th tee over BPB's sole water hazard. Funny how such a scary course has just this one puny, non-threatening little thing. I have honestly seen bigger casual waters at Dyker Beach after a big rain. 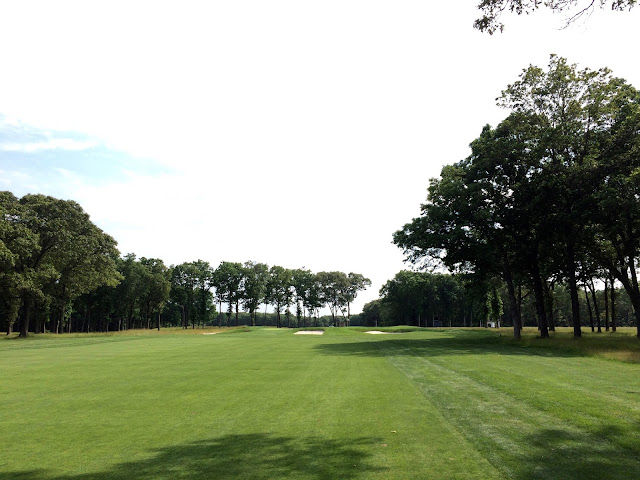 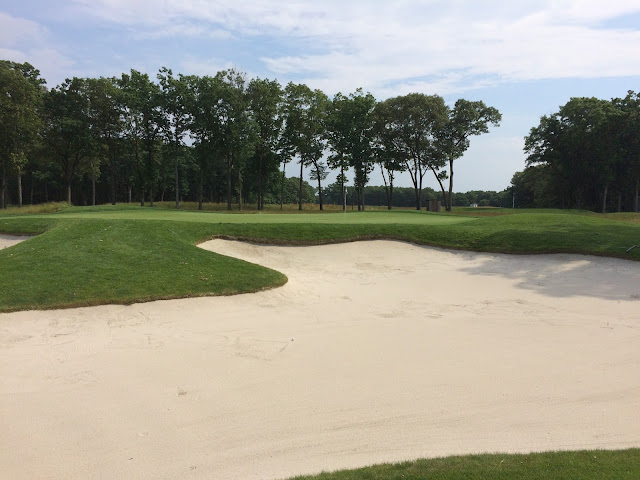 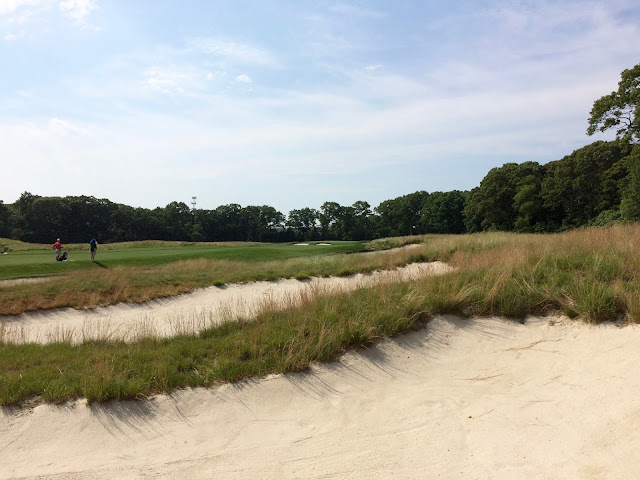 When you hit it offline, you can end up in some deep trouble. 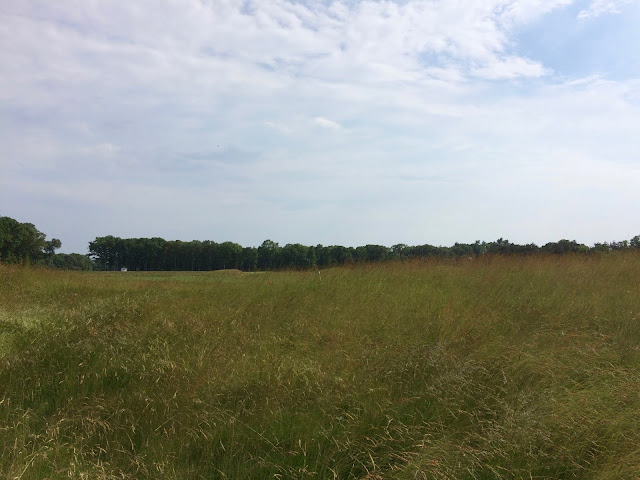 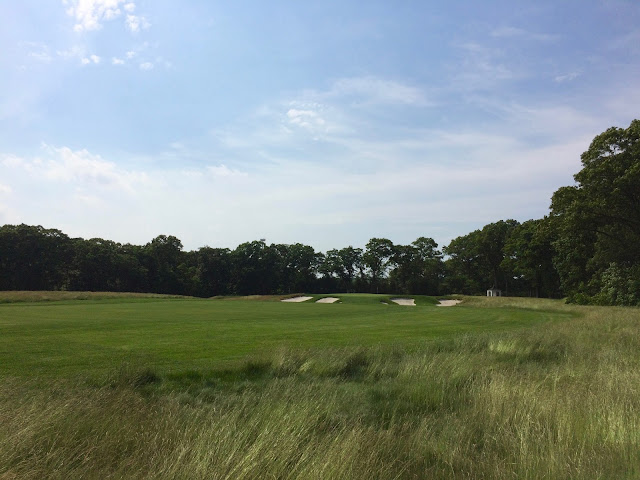 Think I can re-join the hole somewhere around here. 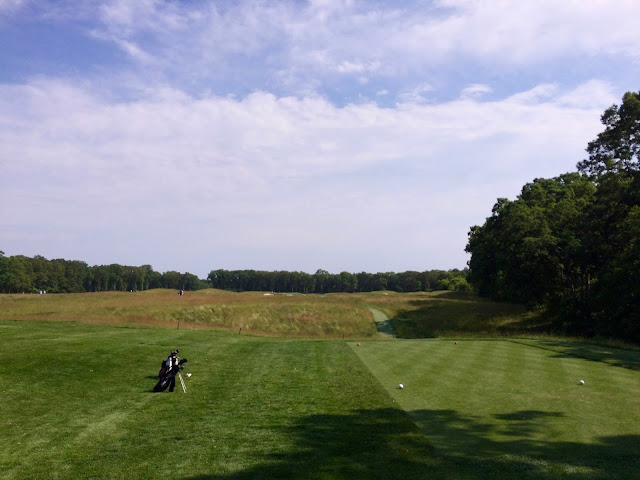 One of a few difficult tee blind shots at 11. 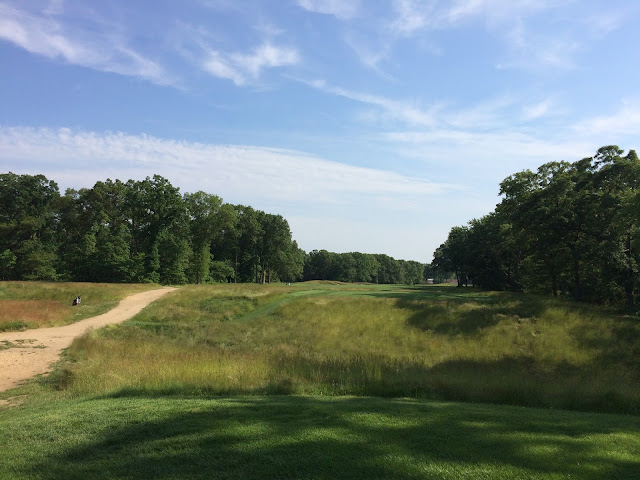 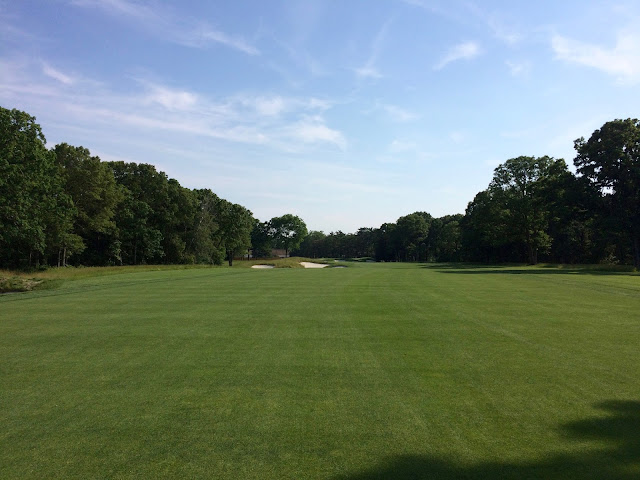 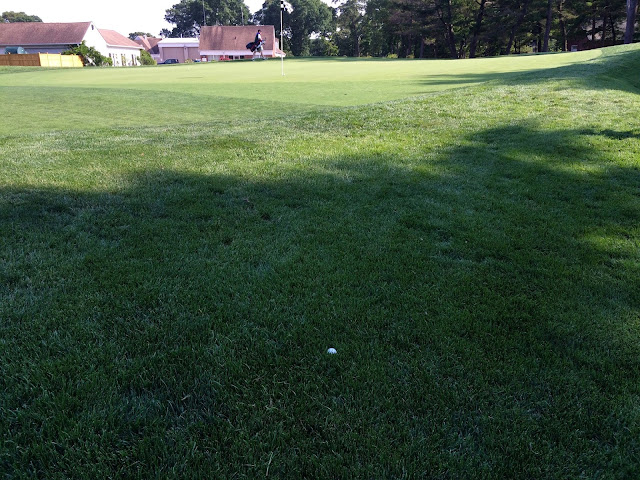 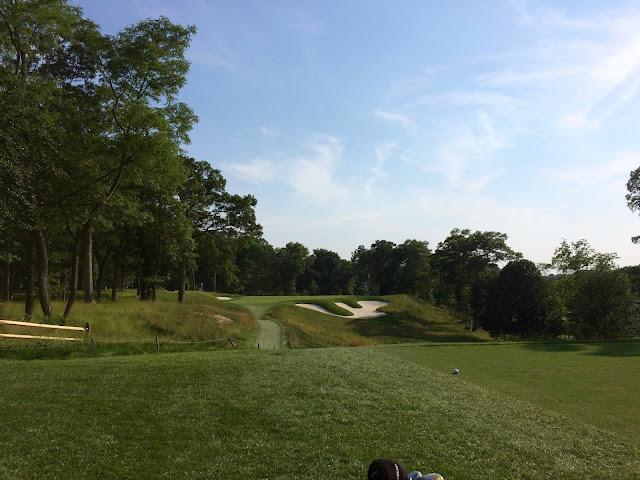 This turned out to be a dream day for the playing of the Black. Temperature was a very bearable mid 70s under partly cloudy skies. A slight threat of some t-storms in the afternoon must’ve thinned out the tee sheet, because our foursome hardly waited all day and finished in about five hours. 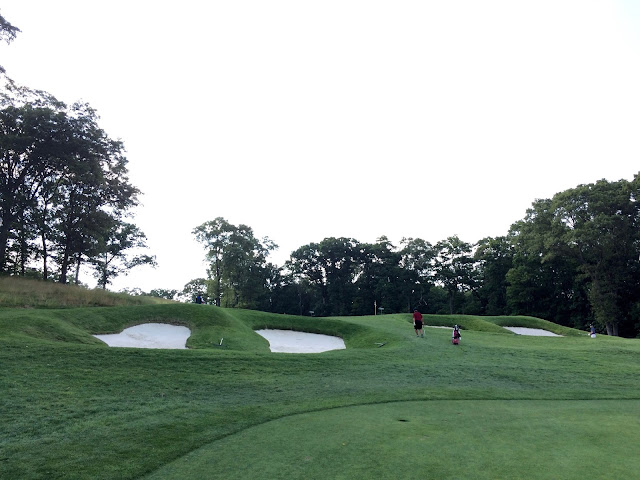 The massive climb up to 15th green. The scale and pitch of this thing need to be seen to be believed. 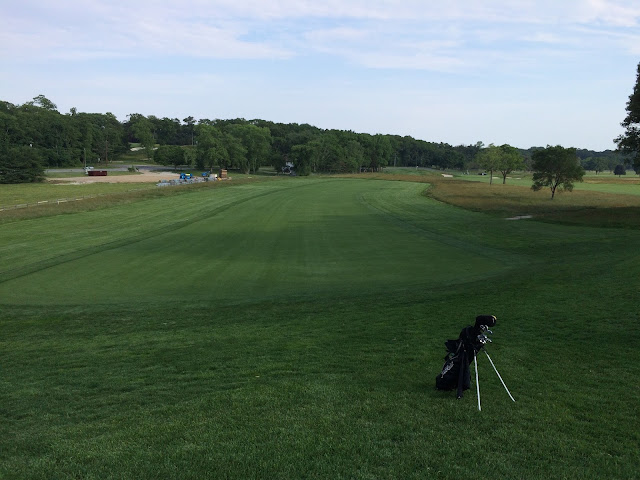 This is an innocuous looking shot of the 15th fairway looking back from greenside, but what can't really be seen just past my bag is a precipice and a steep drop. Sorry for the poor photography--I was busy making another 10. 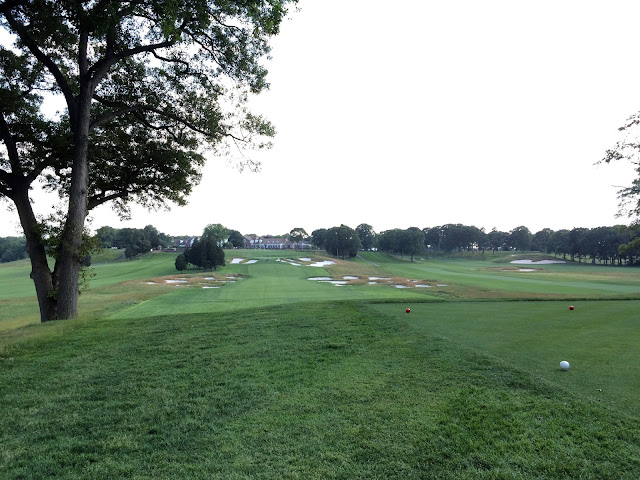 I effectively took on one of the toughest golf courses in the world with no swing. No swing. I attempted to approach the round with some half-cocked zen mindset, pledging to “make nice easy swings down the target line” and not really sweat anything else, clearly a desperate attempt to piece together something resembling a game plan. What ended up happening was I made a lot of lazy noncommital swipes at the ball. The first few shots were sketchy and from there I kind of shut down emotionally. Chipping felt pretty good though and putted semi-decent, so there’s that.

In the end I had three gigantic blow-up holes and barely broke 100. Somehow I scraped out a birdie and six pars along the way, including three in a row to close it out. On the 18th I hit a driver into a fairway bunker, but it didn’t matter because the swing finally felt good and the contact was solid. Walking up the mountain climb to the green I wished there was time go back around the front nine again. My game plan had truly blown up in my face. In the midst of making deep changes to my swing I didn’t need zen, I needed specific thoughts and feels to get me through the day. I came to realize all this in the middle of the 18th hole of course. Too bad. Time to go home, pal.

My young cousin played the back tees, broke 80, and impressed the hell out of everyone in the group with his golf game. The course tested him, and there were moments of peril but he made nothing worse than bogey, flashing some great short game and putting steely par and bogey putts in the center of the cup all day long. After this he’s off to play golf in front of a bunch of college coaches, on some mid-6000 yard course which will probably feel like a pitch and putt after today. 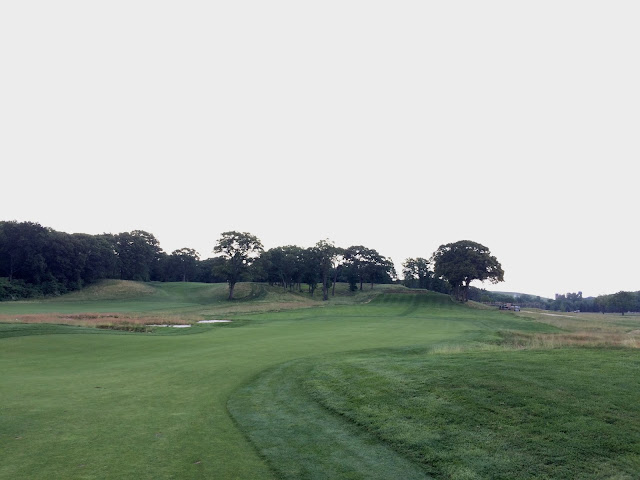 I am already planning to come back here again, and soon. Over the years I’ve been sort of indifferent to the place, but I’m warming up to it, the challenge it offers. And I am realizing that in this world of jacked-up prices and inexorable inflation, the Black’s resident rate is one of the great bargains you will find. Anywhere.

Posted by Legitimate Golf at 2:14 PM