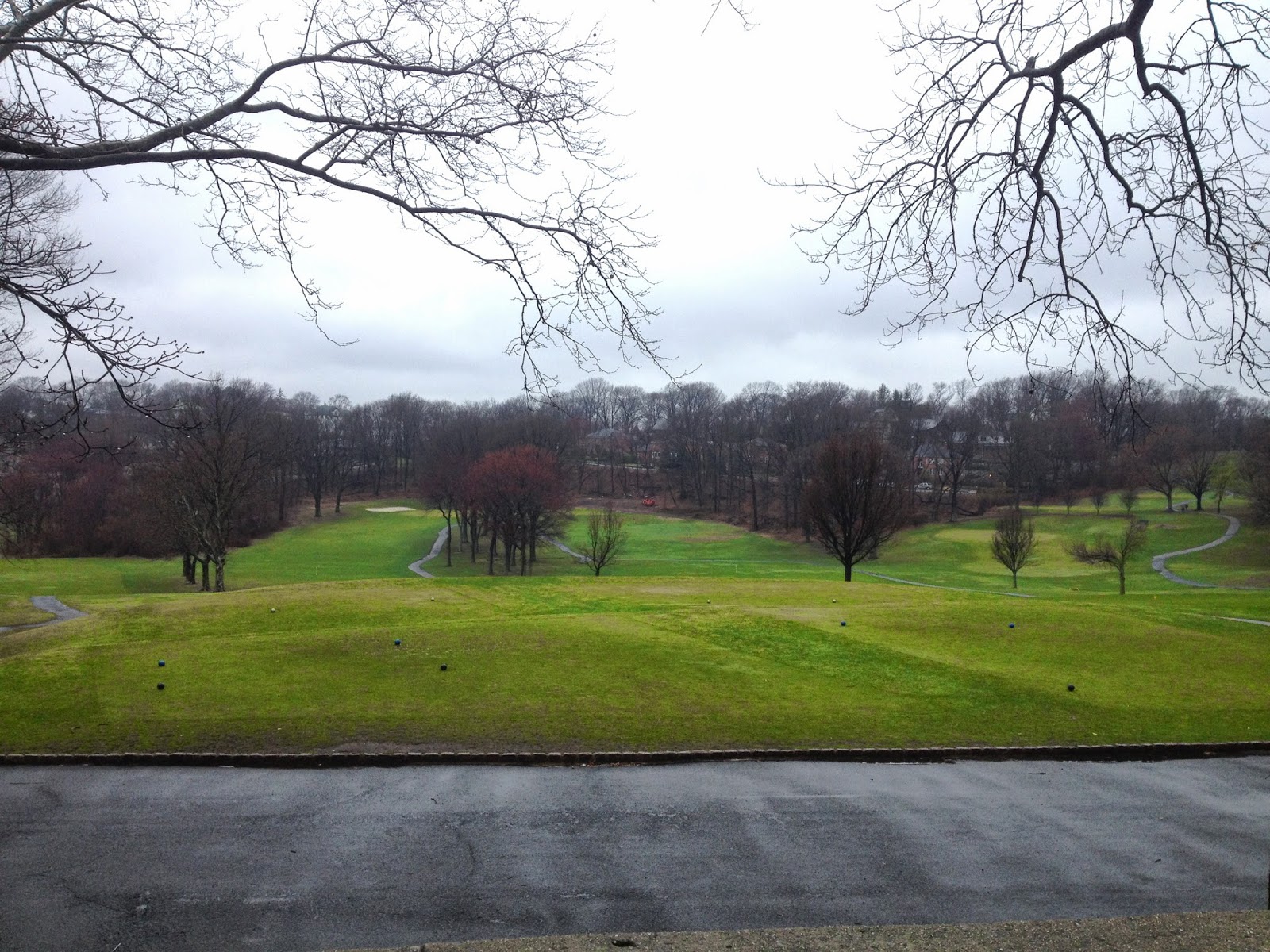 After stinking up Brooklyn with my lousy play, I decided to hide out for a bit in Staten Island. Looking over my last twenty scores, I see that I've played more rounds at Silver Lake than anywhere else. So I guess that makes this unofficially my home course now. It's a big change after being a Brooklyn golf regular for all these years.


And kinda weird how it all turned out, how this whole idea of taking the ferry to the dreaded island to play golf was suggested in some random bus-stop conversation with a complete stranger, and now just a few months later I'm all ensconced up in here. 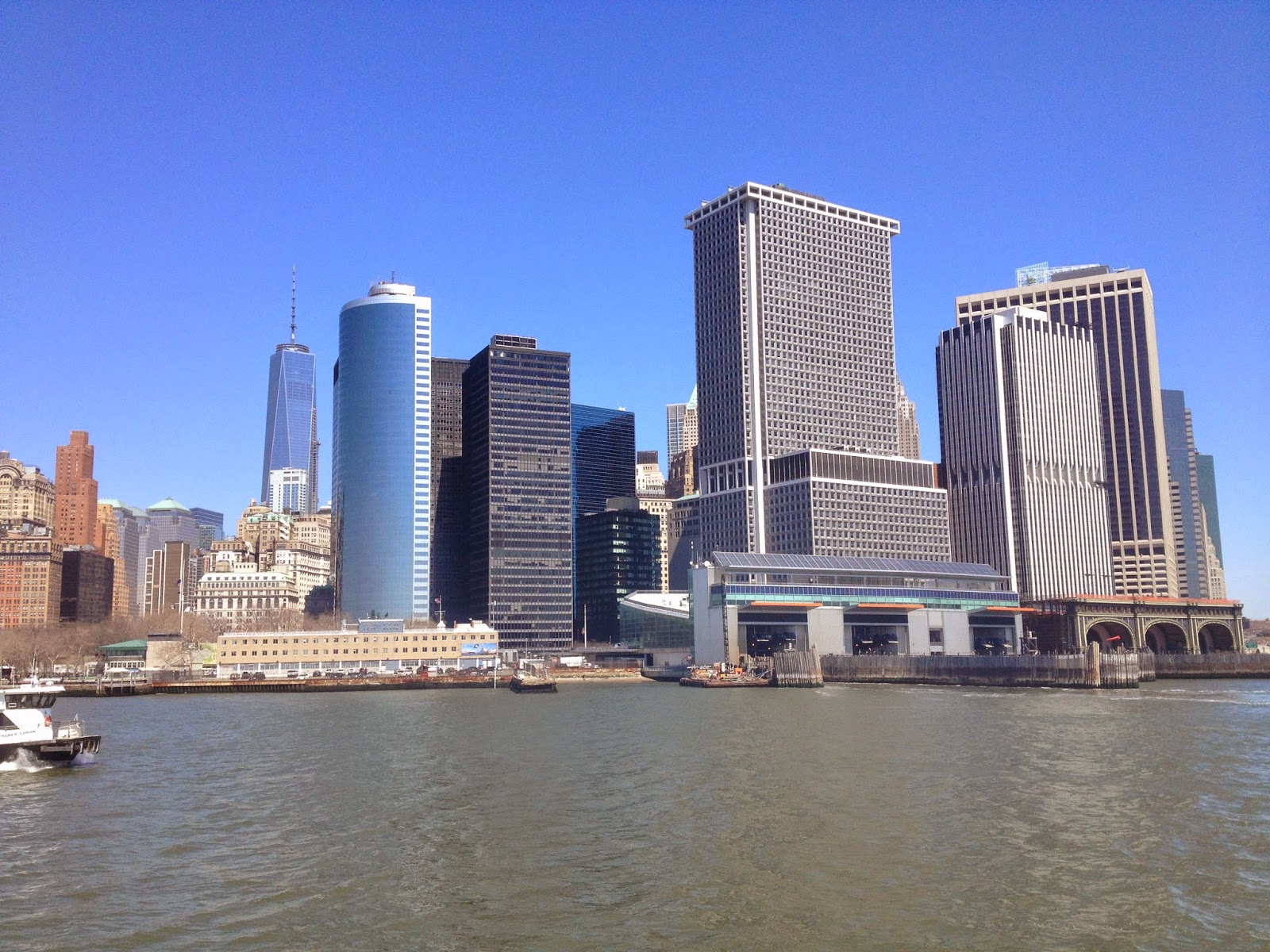 A great thing about the ferry is that it's punctual. It's a twenty-five minute ride that leaves and arrives on-time, just about every time, and that kind of dependability has a way of taking a lot of the edge off the stress of mass transit. 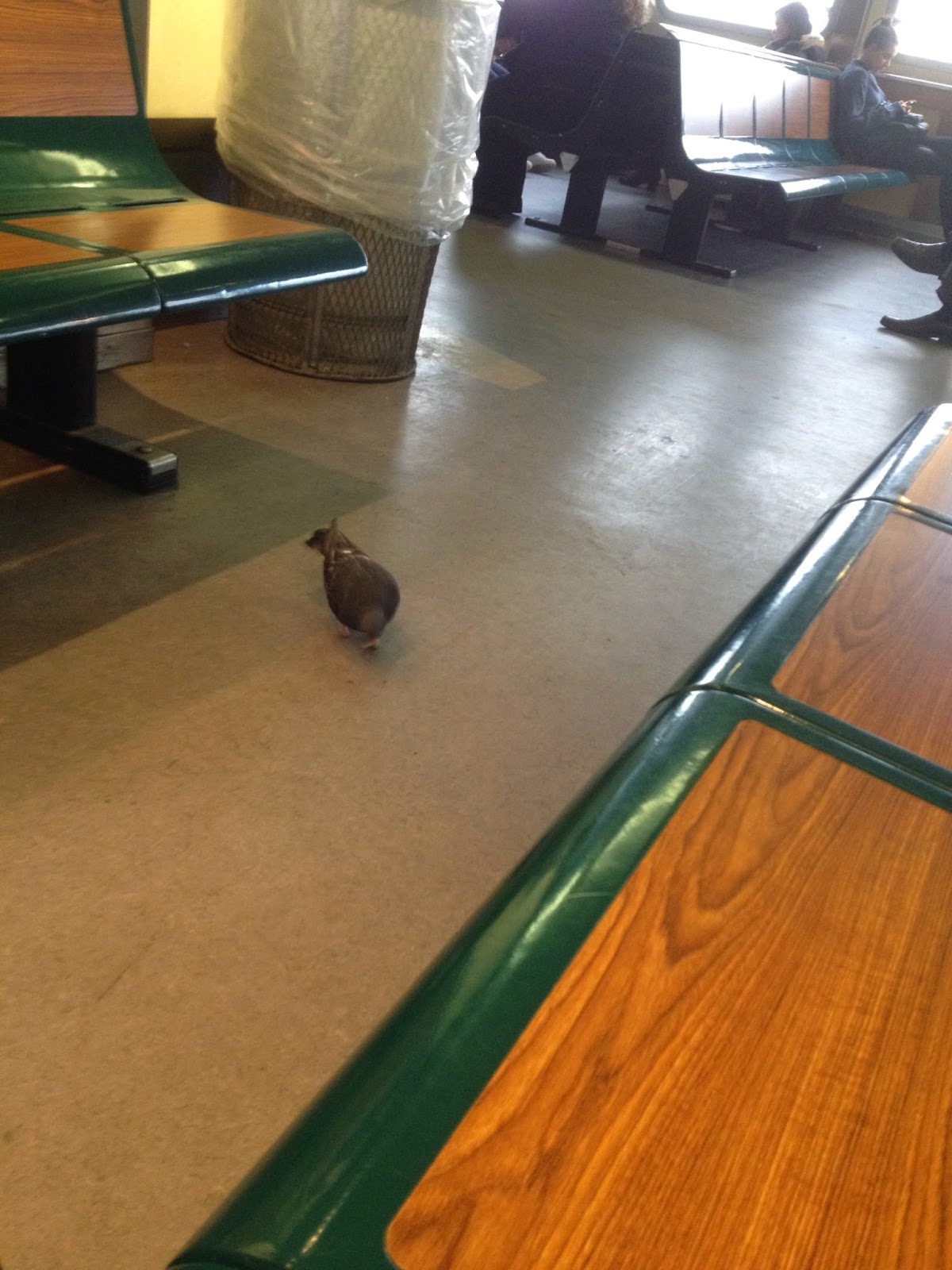 Once onboard, as long as you can find a quiet place to sit, the ferryboat is somewhere a dude can really spread out and have some time to himself, whether it means doing some smartphone computing, making phone calls, enjoying a snack or a beverage, doing some sightseeing out the window or even just sitting there staring into space. Massive throngs ride this thing everyday, but onboard there is a relaxed vibe and almost none of the noise, bustle, discontent or confinement endemic to the subways and buses. 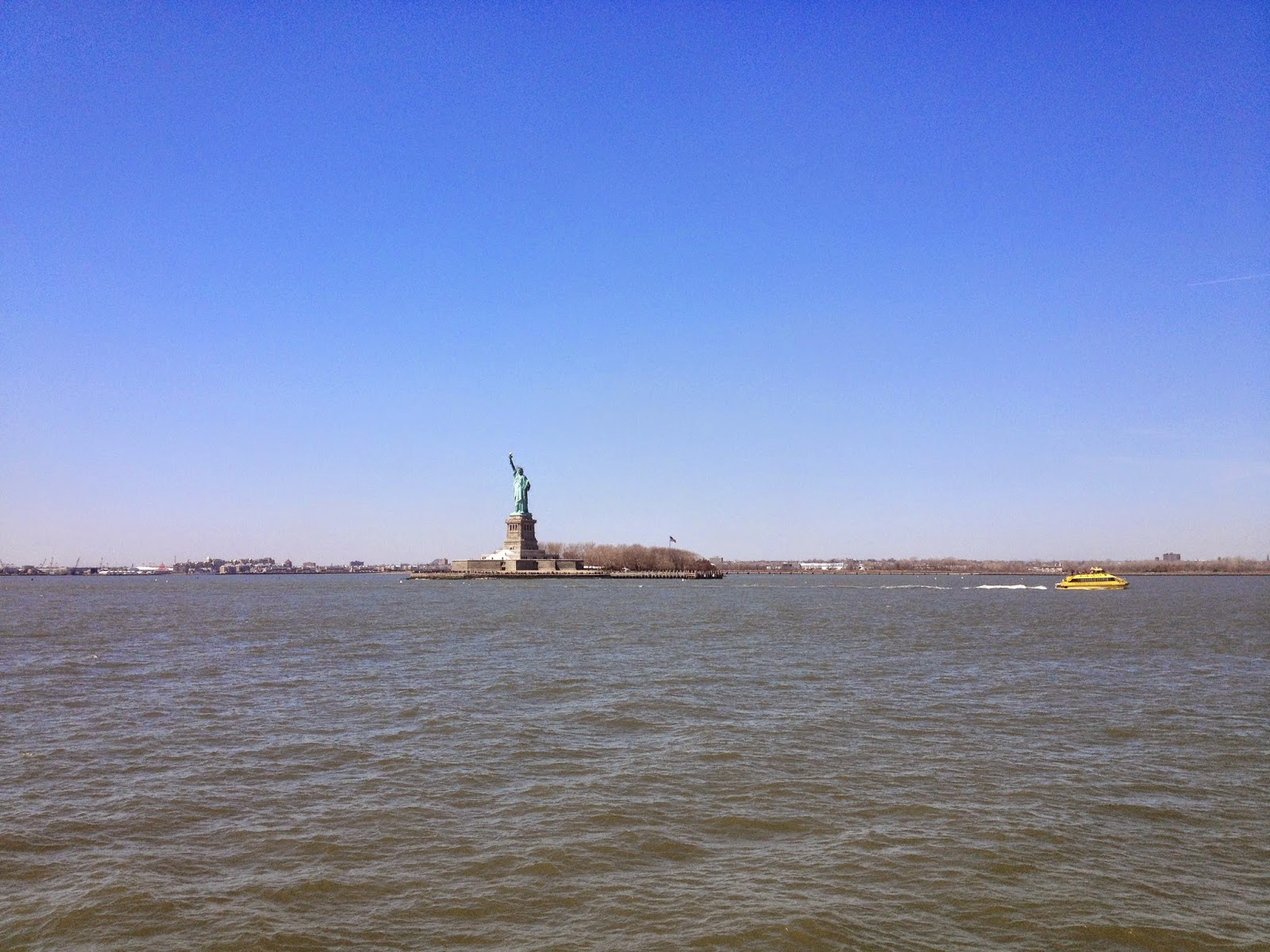 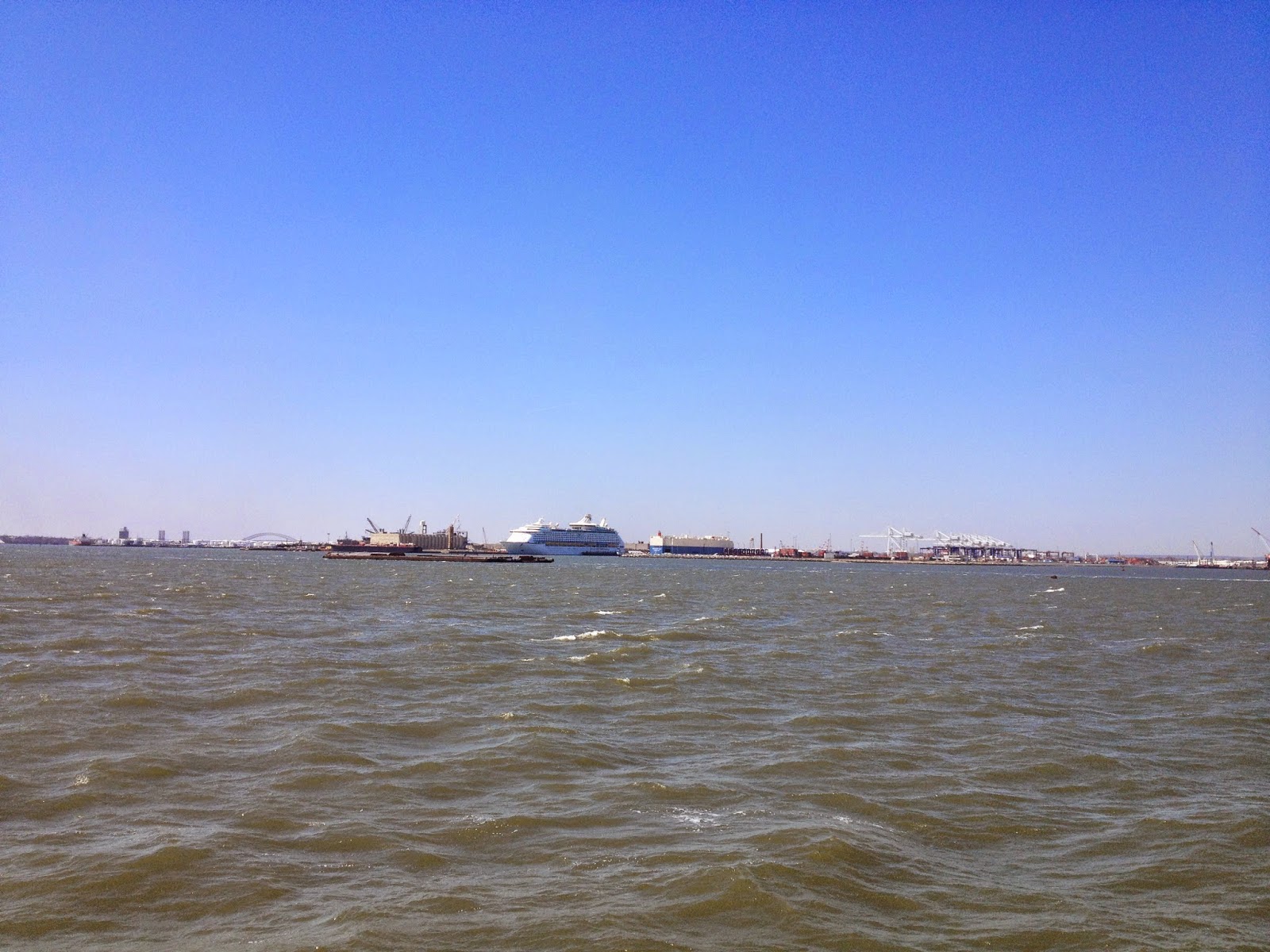 When the weather's nice I can sit by an open window and take some tourist pictures. Not that I really care about any of this stuff, but hey--value added is value added.

On top of all that the tee-time deals on this island are unbeatable. So for me to ditch Brooklyn golf in favor of here is all quite sensible really. 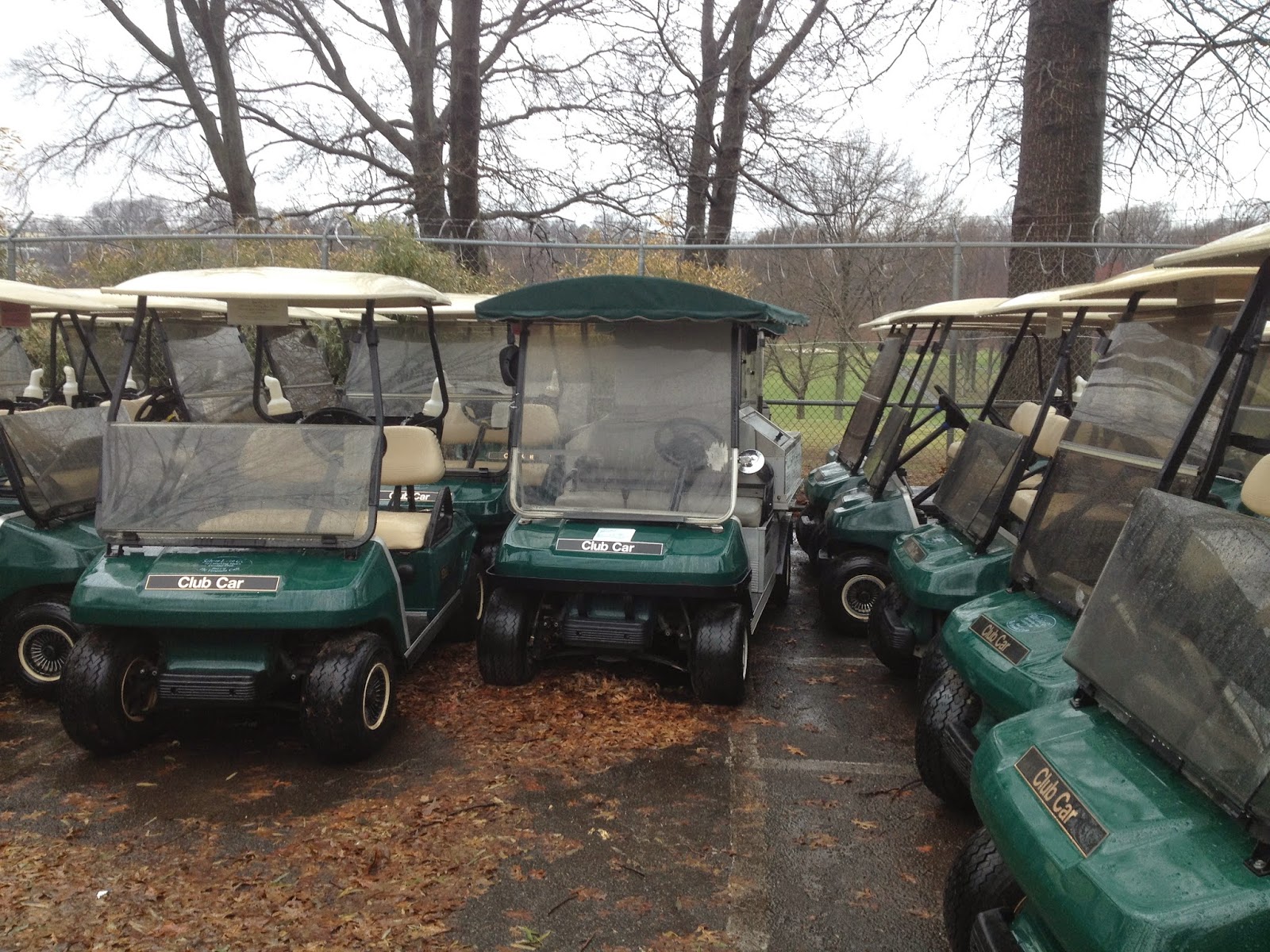 On this particular day the weather was pretty bad; no one was really going out so I was told to go fetch my own cart from the corral, where I saw the cart-girl's vehicle staring me in the face. I was tempted to take it out for a spin. Not tempted enough to risk the shame of getting caught though. Since this is my unofficial home course now I need to keep in good stead with the fine people who run it. 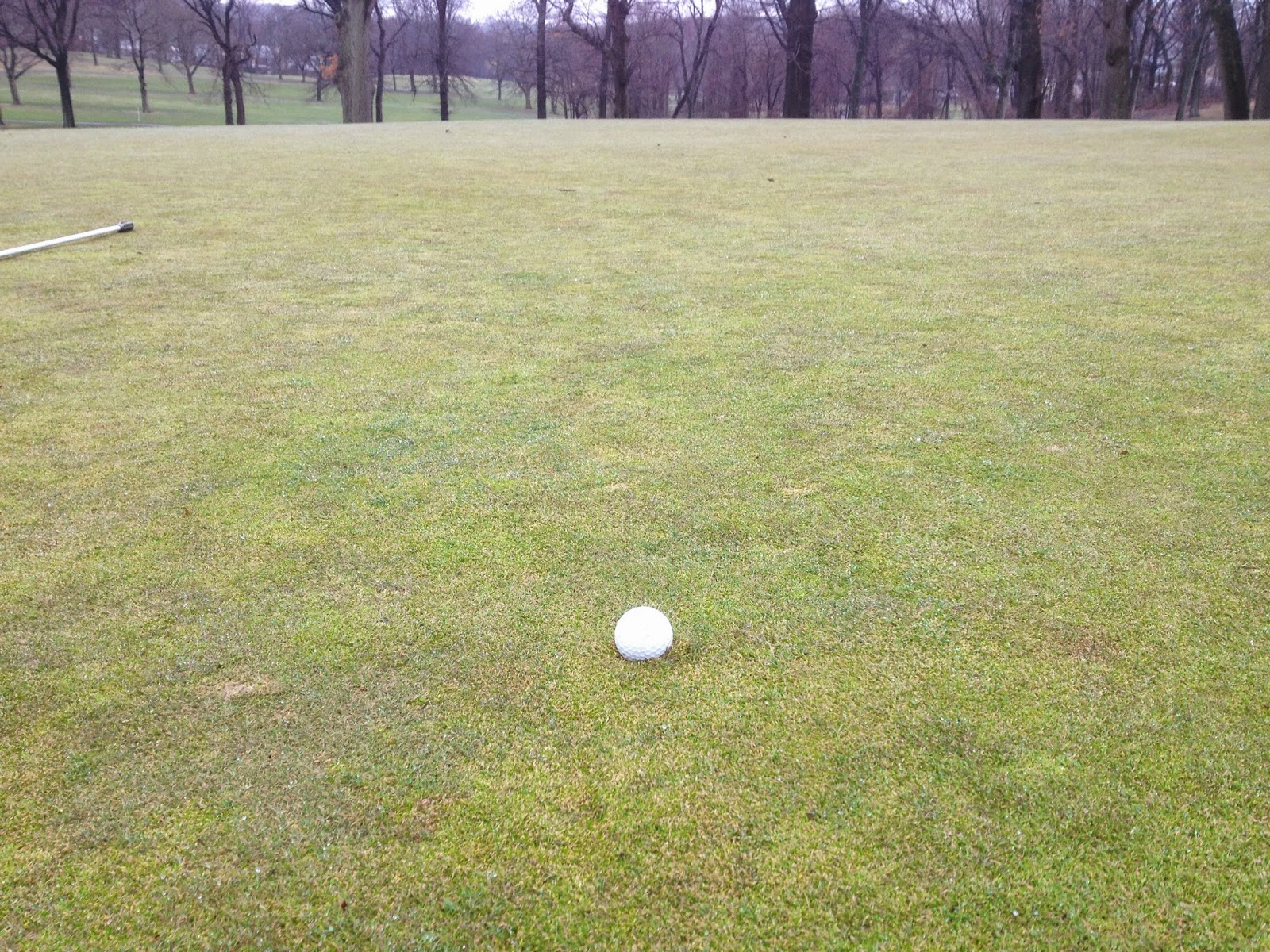 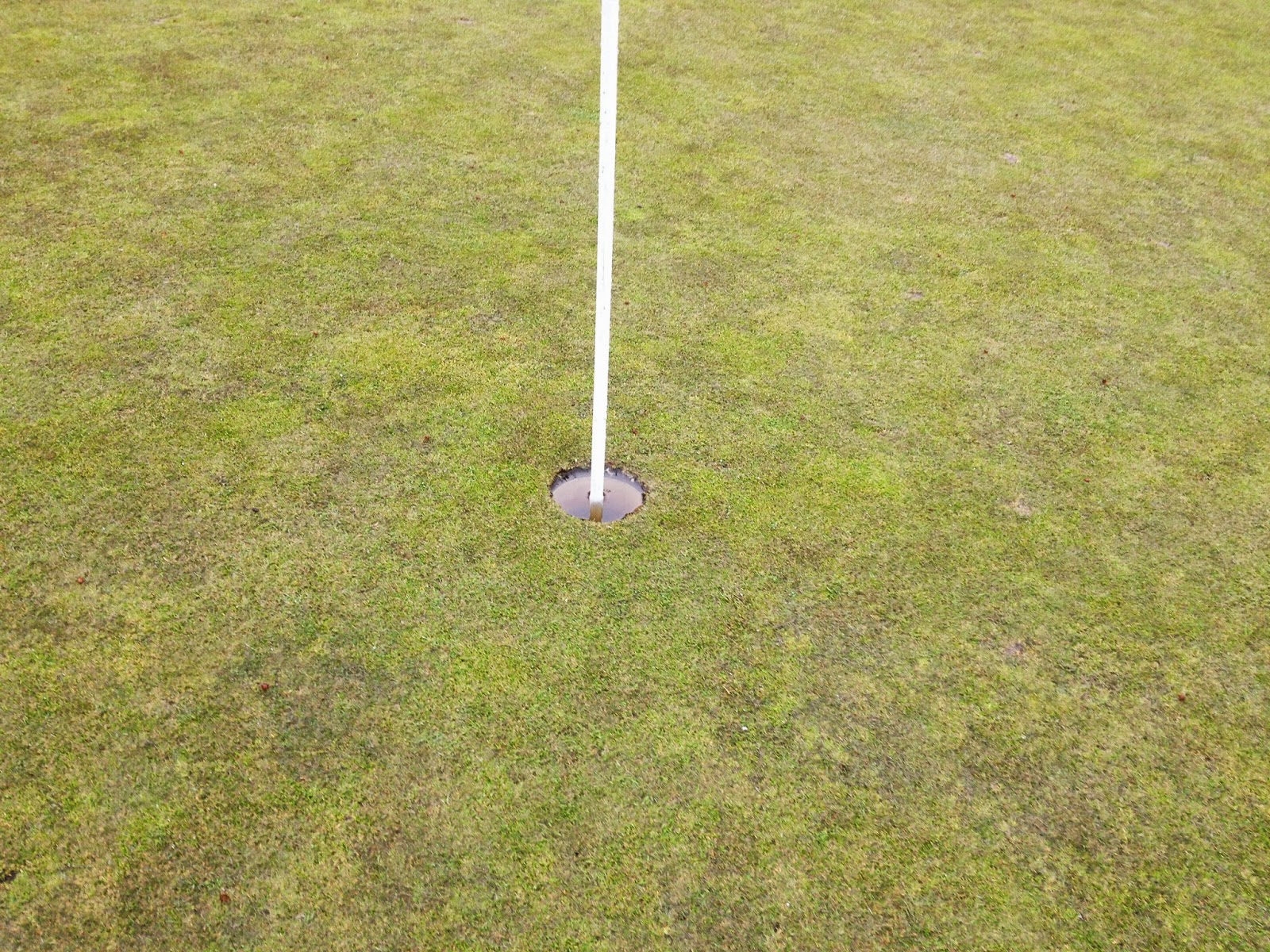 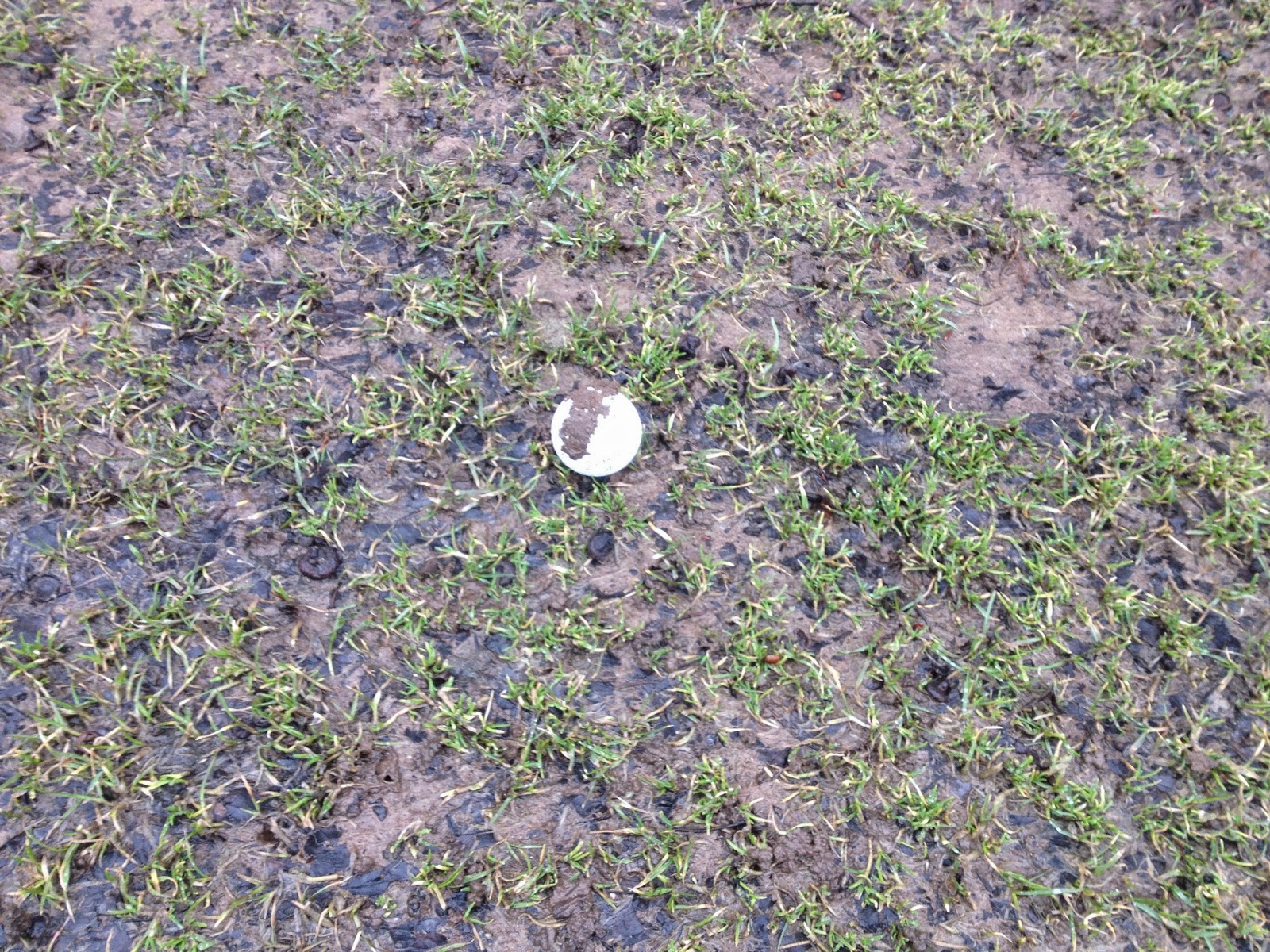 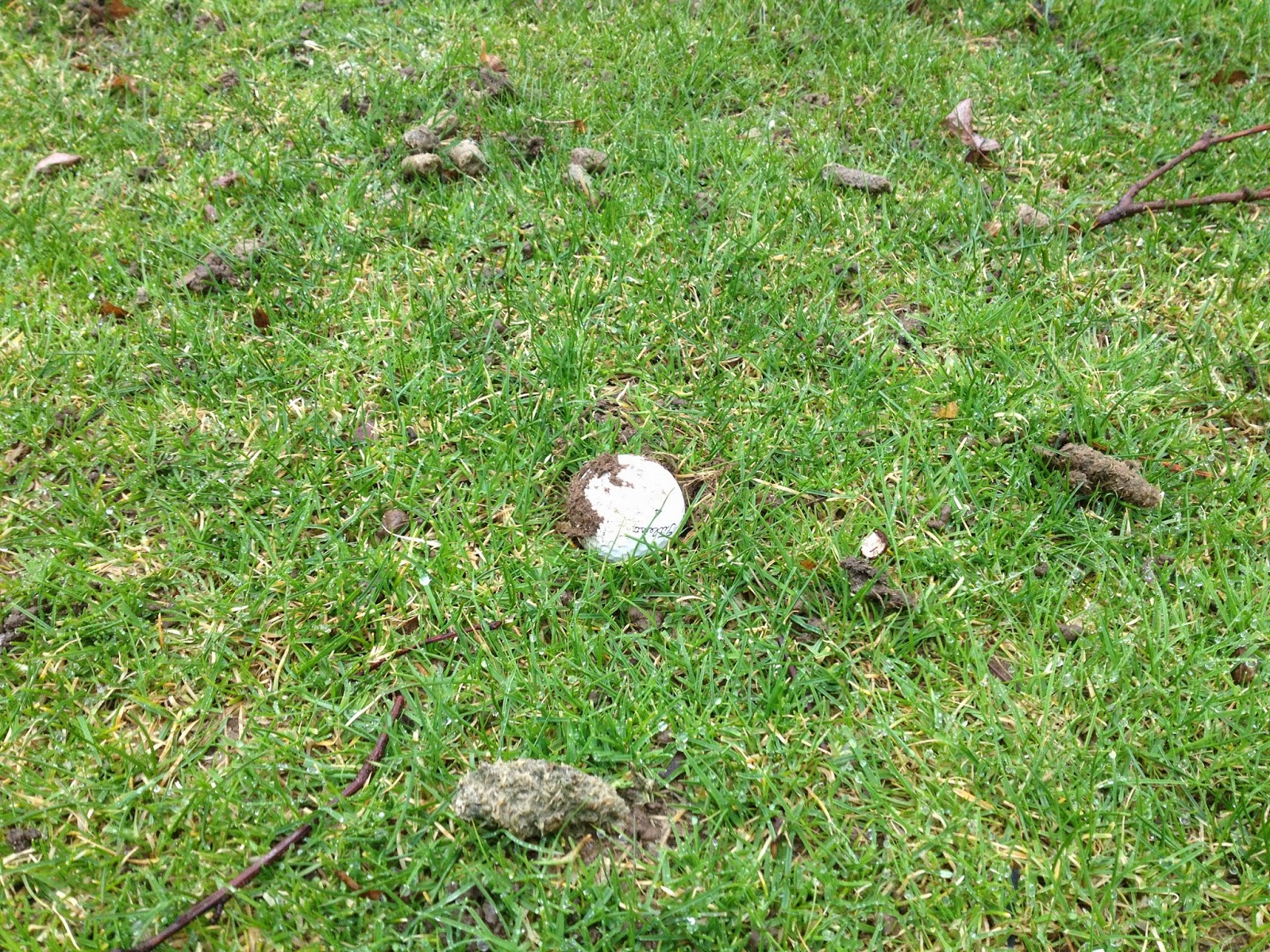 Really wet conditions lately. I'm finding out there are lots of lowly spots on this course, which collect water and then take a long time to drain. This has a way of making the 6,200 yard layout play quite long. 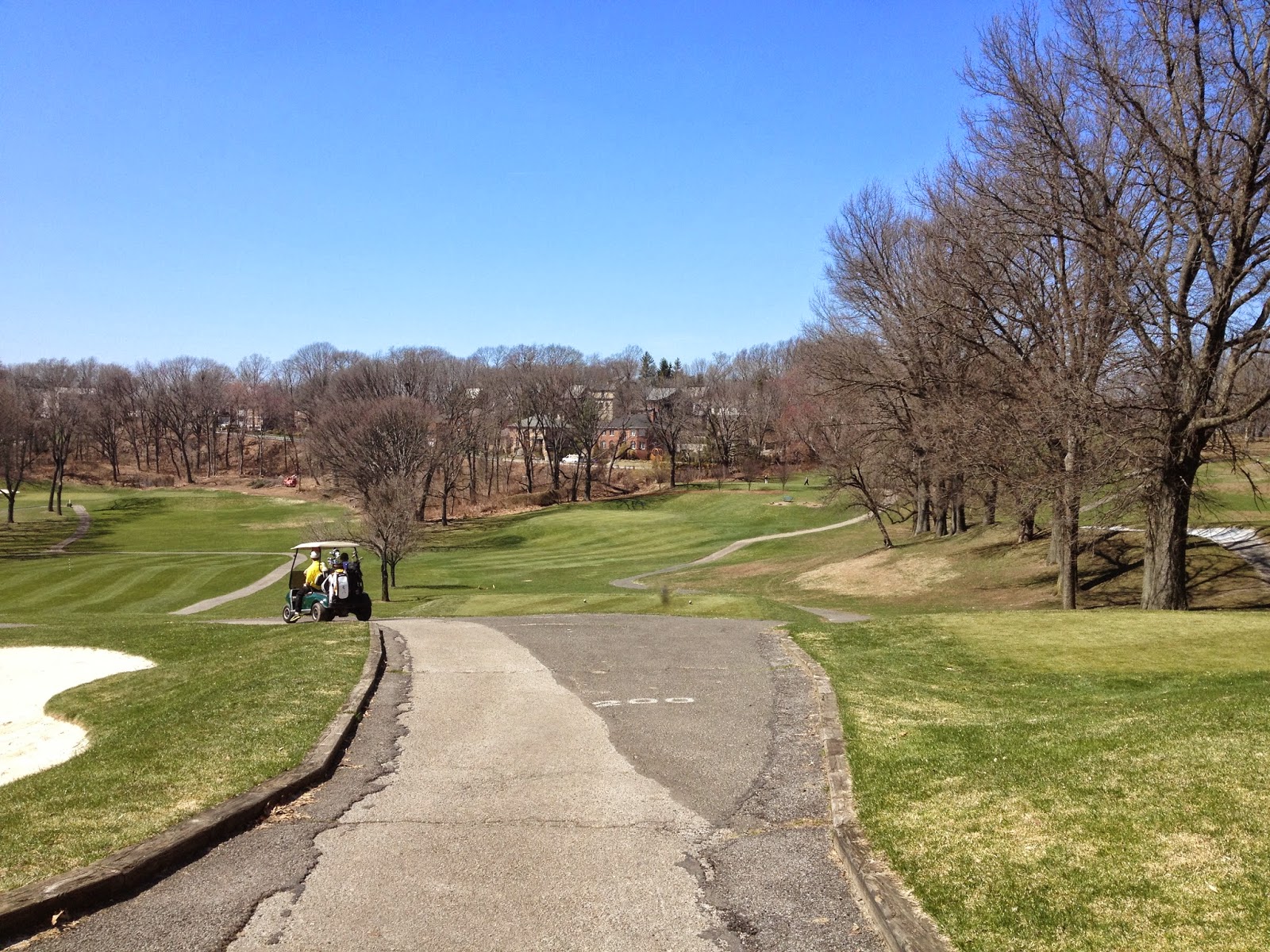 The latest round was the probably the most interesting, first of all because the other people in my group happened to represent a really, really wide span on the spectrum of golf-life: a pair of truculent-looking Staten Island-Italian chaps around my age, both covered in arm tattoos that included, I shit you not, Brando and Pacino's likenesses from "The Godfather", and one tiny middle-aged golf-nut Korean lady.

The guys were terrible. As the round progressed they tried to remedy their hopeless sucking by swinging really soft, which was a complete disaster. Personalitywise they didn't do all that much better. The lady, all hundredsomething pounds of her, was outgoing enough with her broken English, and confident in her game which I appreciated. Even though she had some trouble hitting anything past 150 yards, she hit the driver on a string and made a lot of putts. By her estimation she tied my 92, and definitely beat in the brains of the two numbnuts. 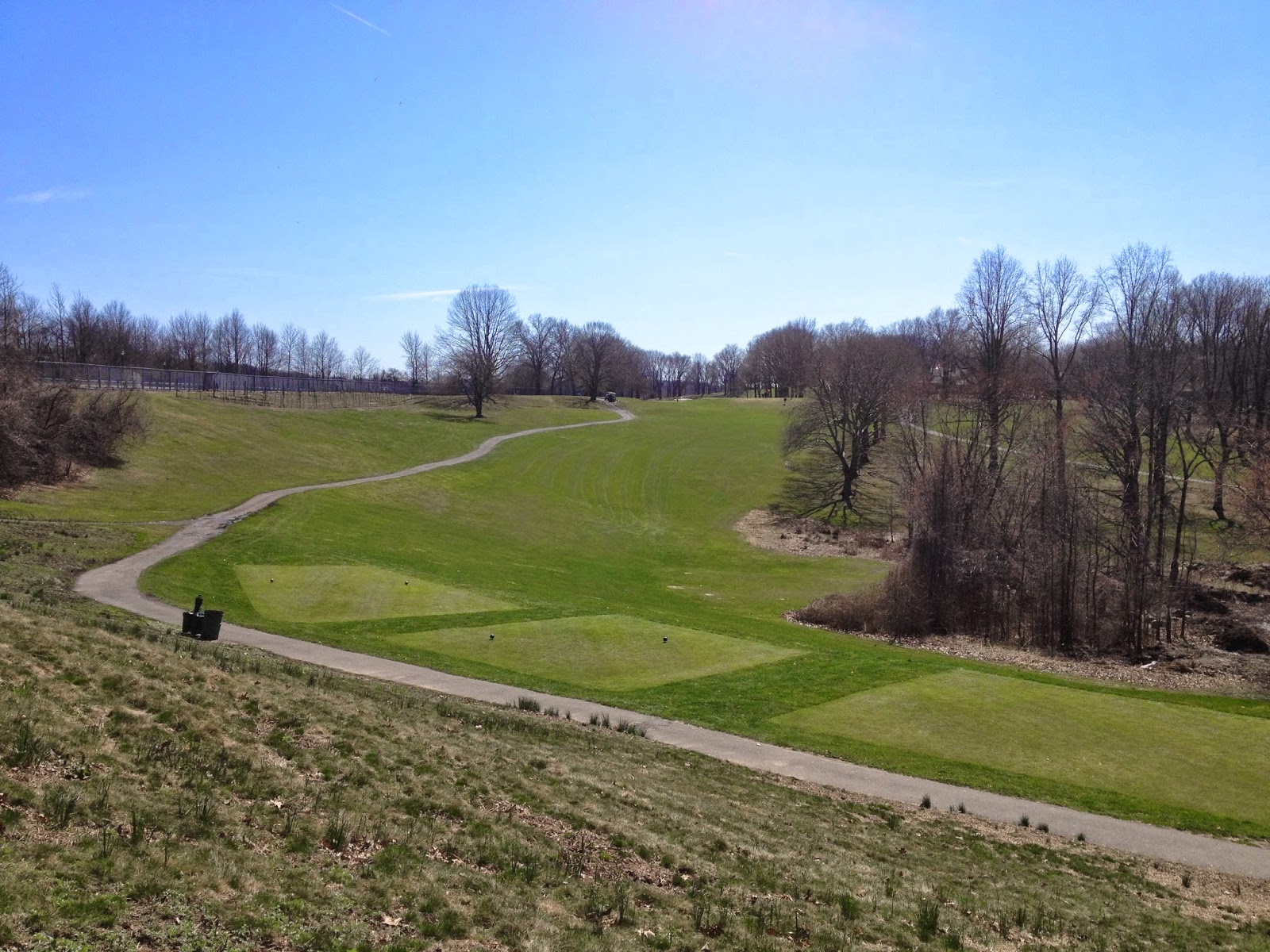 Also the round was funny in that I failed to hit a single crummy green in regulation. I realize that in the universe of golf I rank barely above pond scum, but that is sad even for me. I checked and it's the first time I've done that in a round since I started keeping track four years ago.

It gets even dumber. Towards the end I incurred three odd penalty strokes. First a harsh double punishment for playing the wrong ball--I hooked an approach, went over and found a slop-covered Titleist Pro-V1 and wrongly assumed it was mine. Then on the last hole I coughed up another stroke, this time for tapping the ball out of its lie with a botched waggle at address. Nice going.

I know a lot of the population will look on this behavior as some kind of pointless self-flagellation. Well, maybe it is. It feels good, what am I going to tell you. I love the whole game, nasty rules and all. Plus there is a perverse pleasure in going against the grain. Try it sometime.

Anyways long story short, I just can't break 90 lately, and on a short par 70 no less. I seem to follow a pattern of getting clobbered on the front nine, then settling in and playing some insipid 12-handicap golf--bogeys sprinkled with a few claw-and-scratch pars--on a too little, too late back nine. But believe it or not there's tasty bacon bits of good play within all these rounds, the only reason I can be so matter-of-fact about all this hacking. 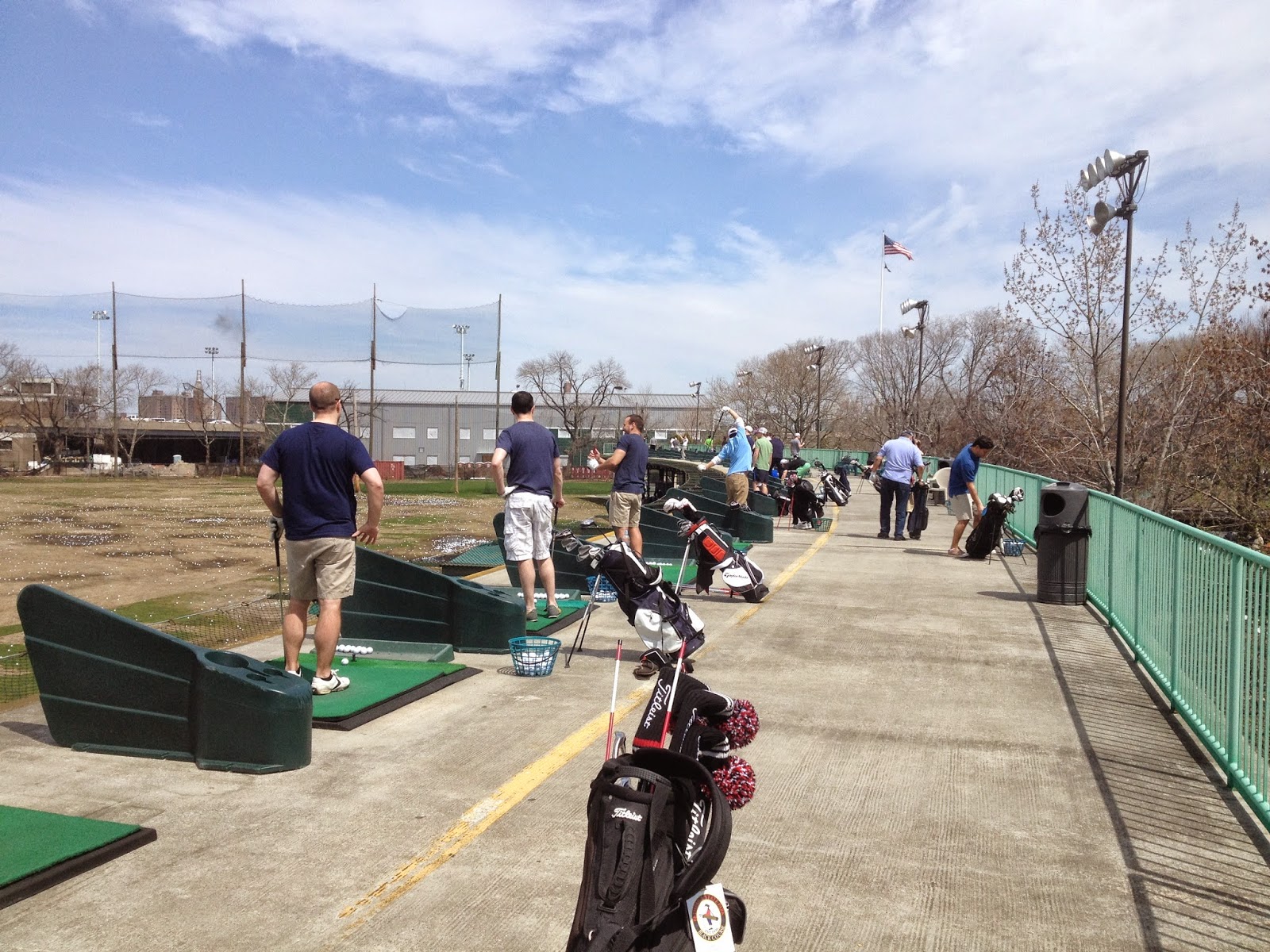 The handicap continues to freefall. I'm up to 12-something. Over the weekend I drifted over to Randall's Island to pound some balls and maybe learn something about myself. It was packed from Masters' weekend golf fever. The only open stall I could find was on the upper deck out in the hot sun. Oh well, we spent all winter pining for this, for the sun to blister bare skin once again, right? 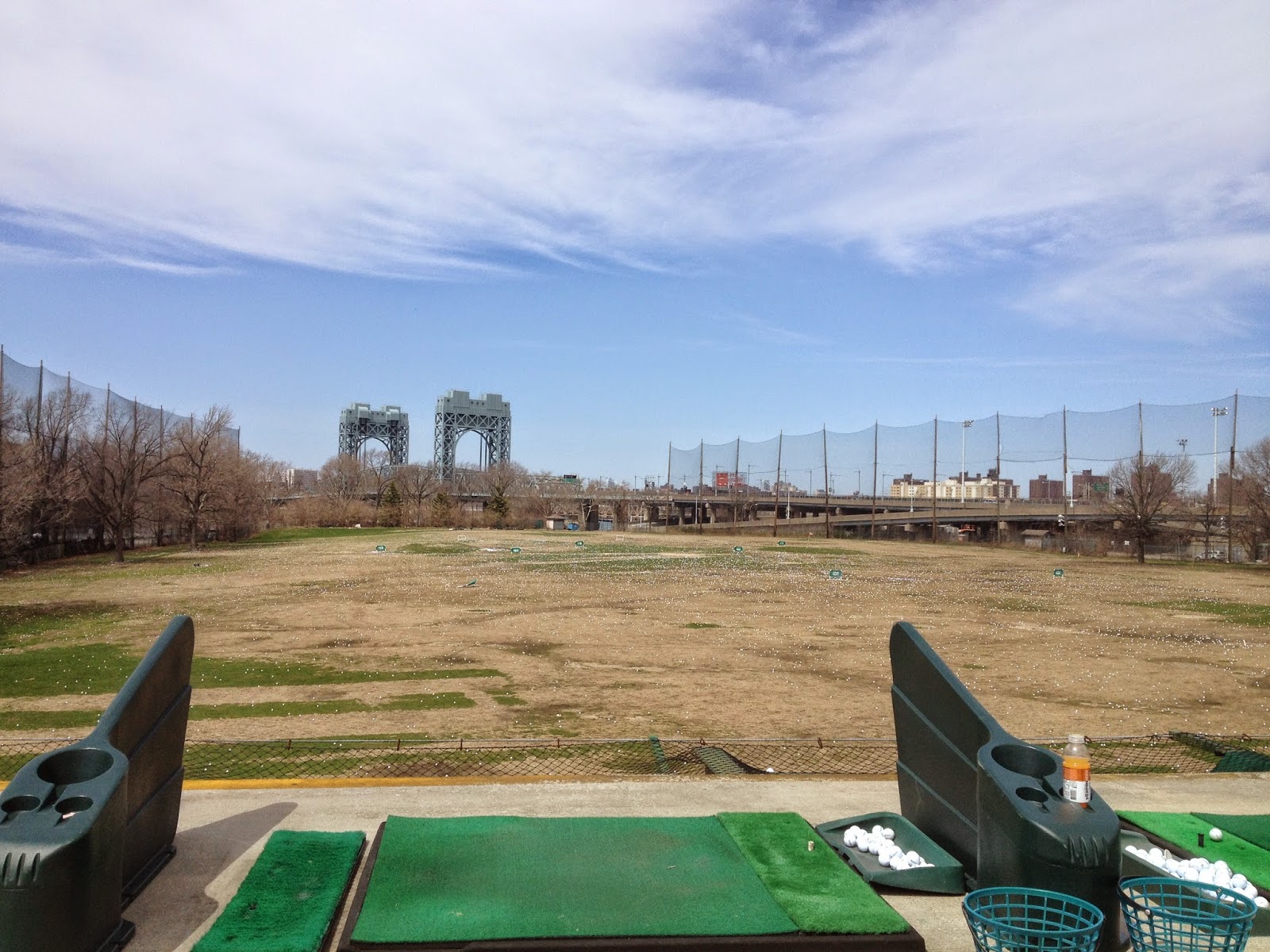 Hackers all up and down the firing line, sweating, scraping their way through jumbo buckets. Focusing mainly on a 6-iron, I hit a small bucket, working on some fundamentals and setup and what not. I made a pretty decent grouping out by the 175-yard marker and let's face it, comparing my work to those around me I had to feel some gratitude for having at least elevated my status above that of these wretched flailers.

I left that range feeling good and confident. Still don't know how to explain or work my way out of this scoring funk, though. I had better though--writing about sucking will eventually get old.
Posted by Legitimate Golf at 7:25 PM