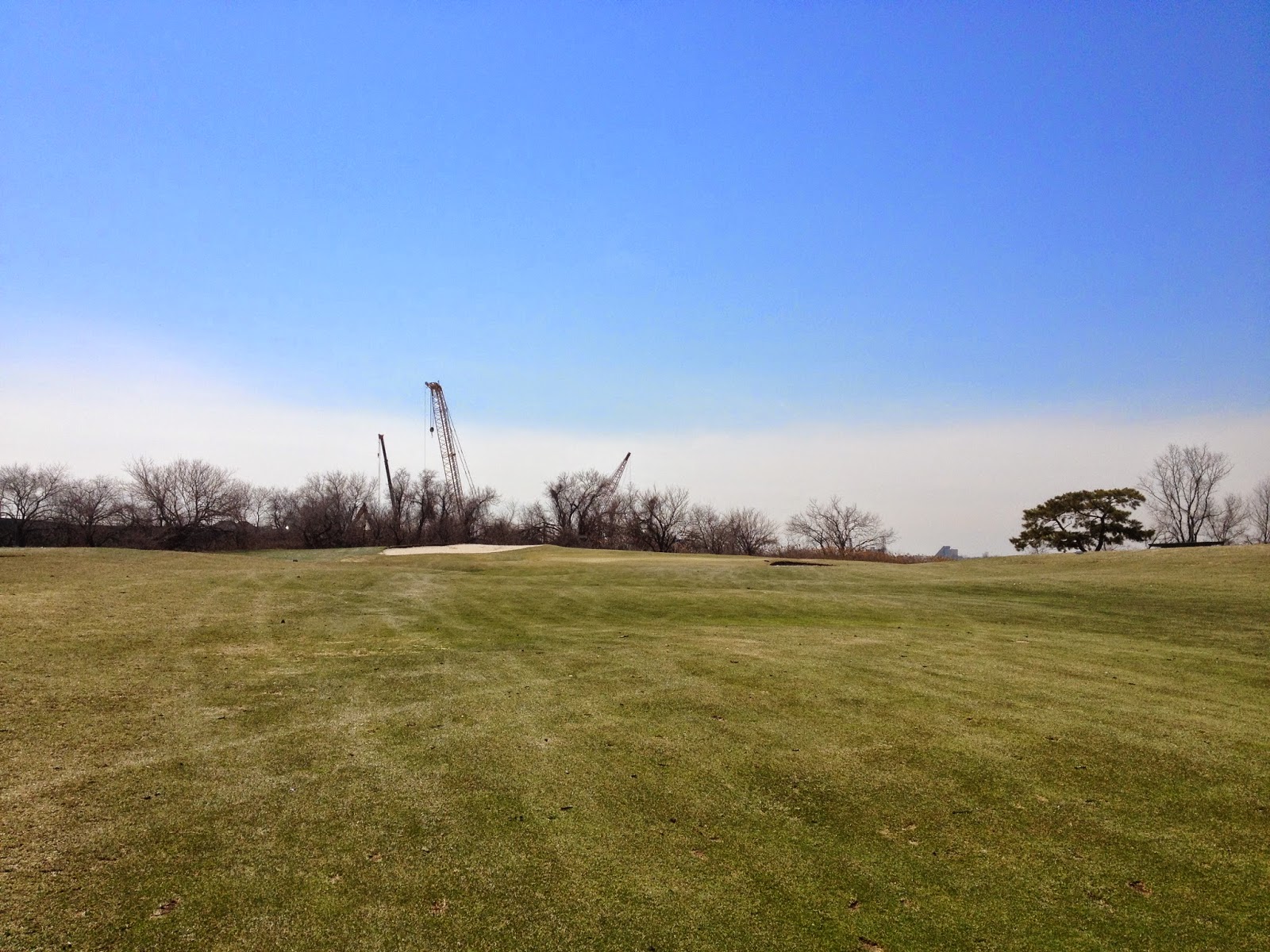 For the next round I thought I'd try Marine Park. The last time I was here a few weeks ago I got brutalized--a 97 was the best I could come up with and I sort of decided not to play here for a while, maybe until conditions improve. But what the hey, I found a deal online that was just too sweet to pass up. 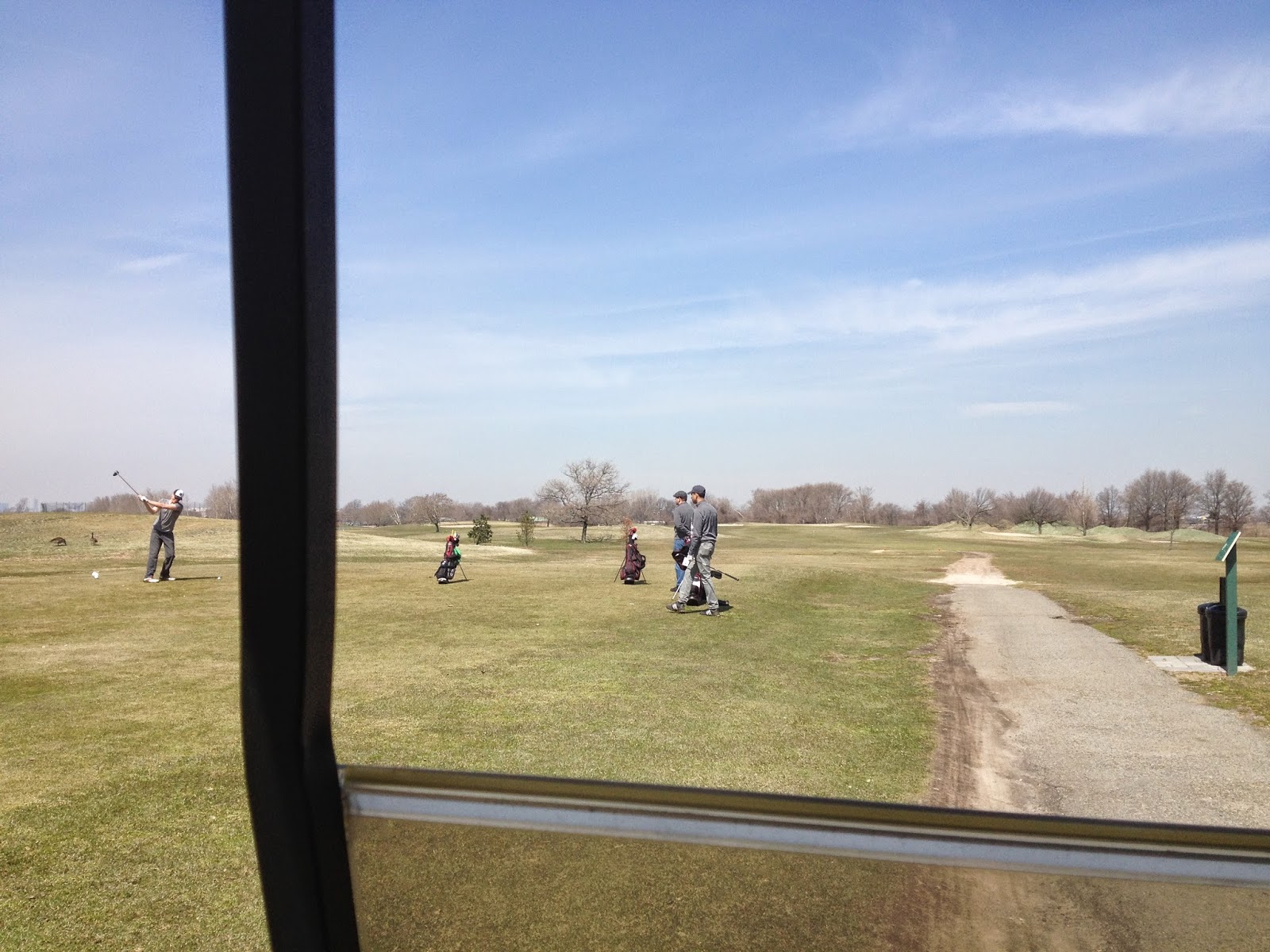 For the first time in a while I had to play in a foursome which of course means repressing the feral beast inside and trying to remember all the protocols of polite social golf. On the flip side though it also meant being exposed to the human element, i.e. people who might try to meddle with your business, constantly asking what club you hit, etc.

A few holes into it, I hit a 3-wood off the tee onto a muddy lie just off the fairway, with a big clod stuck on the target side of the ball. As I geared up to hit the approach, two of the guys saw the lie and made a big stink. "You know, in these conditions, you can do whatever you want with the ball." In a single breath one of them managed to invoke not one, not two--three--reasons why I must not play it as it lay:

"...we should be playing ball-in-hand anyways."

I was impressed at the breadth of the argument as well as the quick reflexivity with which it came out. He's probably been through all this in his own head, I'm sure.

I stayed focused on the shot and the target and what not, even as I heard them closing in behind me, practically about to dive on the ball so I wouldn't try to swing at it. I just kept looking ahead, at the target. "Naw, I'll just play it, it's fine with me." Most protests. Quoting one of their remarks I put an end to this nonsense. "Well, like you just said: 'we can do whatever we want with the ball.'"

So I swung and dammit if it didn't turn out to be the best shot that anyone hit all day, a high-flying 6-iron right at the flag, to about ten feet. Definitely didn't look worse for the mud clump. The truth of the moment seemed to hit the triple-excuse guy especially hard. It almost seemed like he had to apologize. "Or you could do that, give yourself some practice for when you get those lies for real!" He gave me a fist bump. 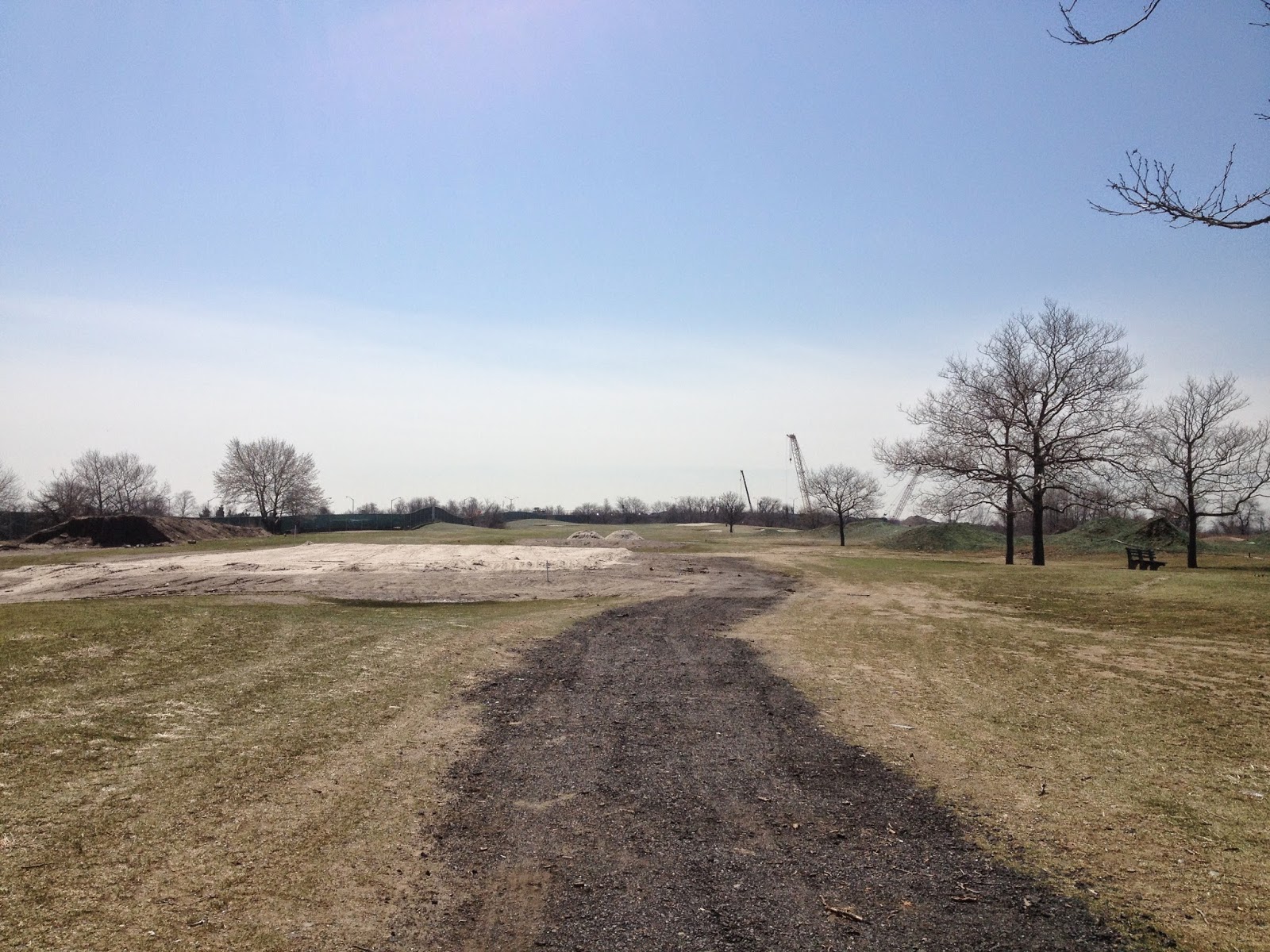 Again, with cart paths like these, who needs cart paths? 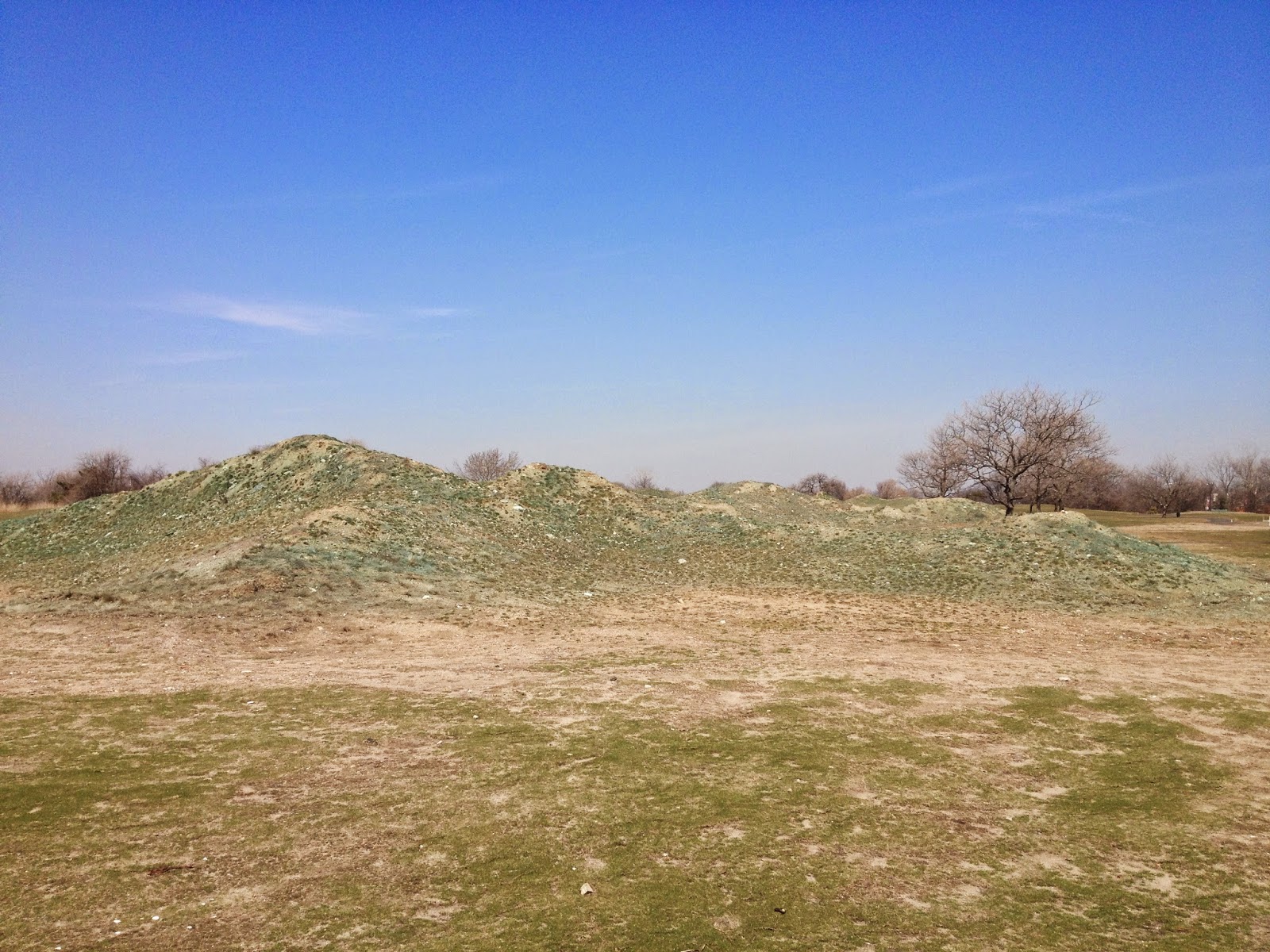 Lots of re-shaping going on right now to create dramatic berms all over the course. 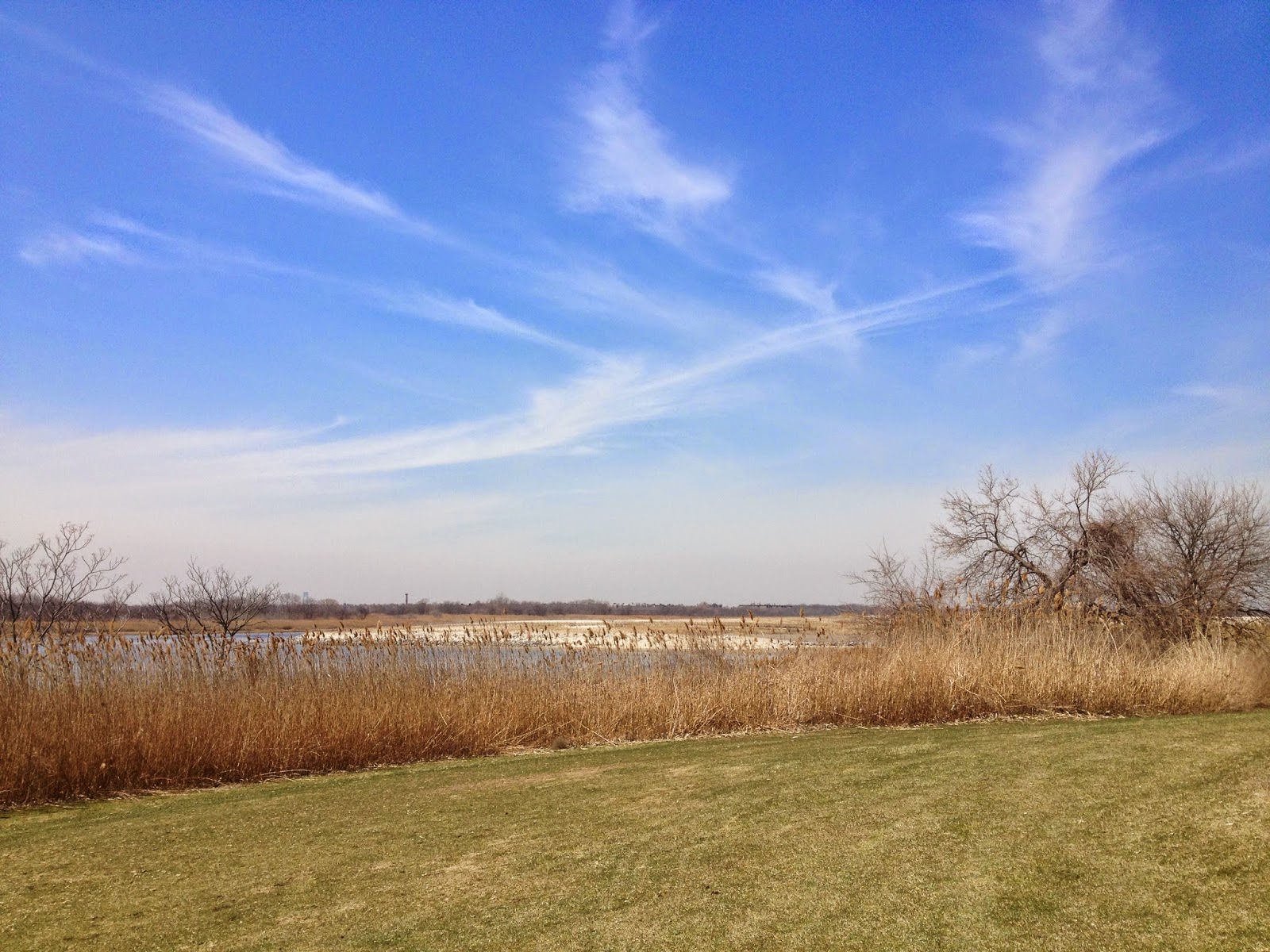 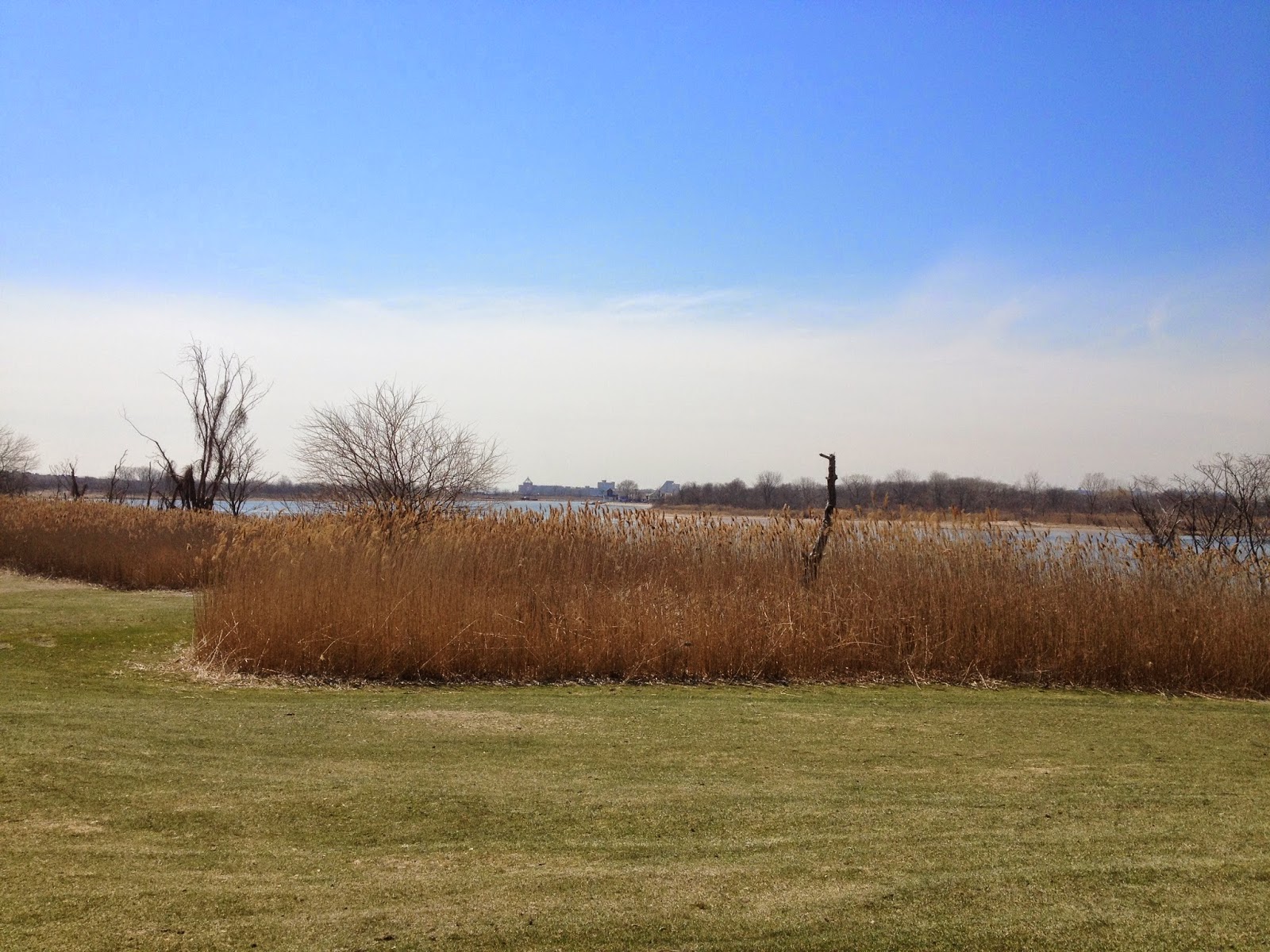 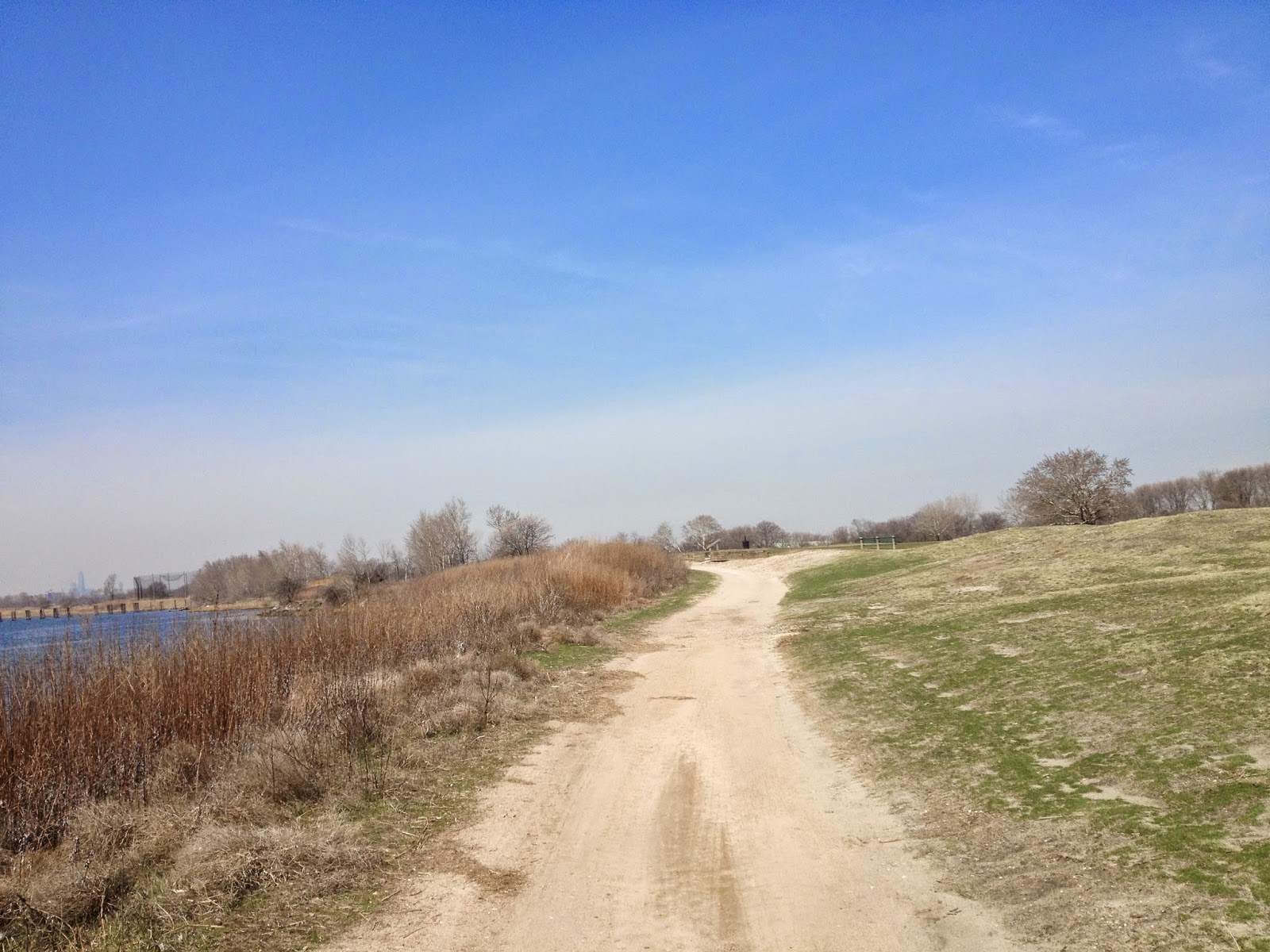 At this end of the golf course which overlooks some water, you can sort of pretend you're in the Hamptons or something. 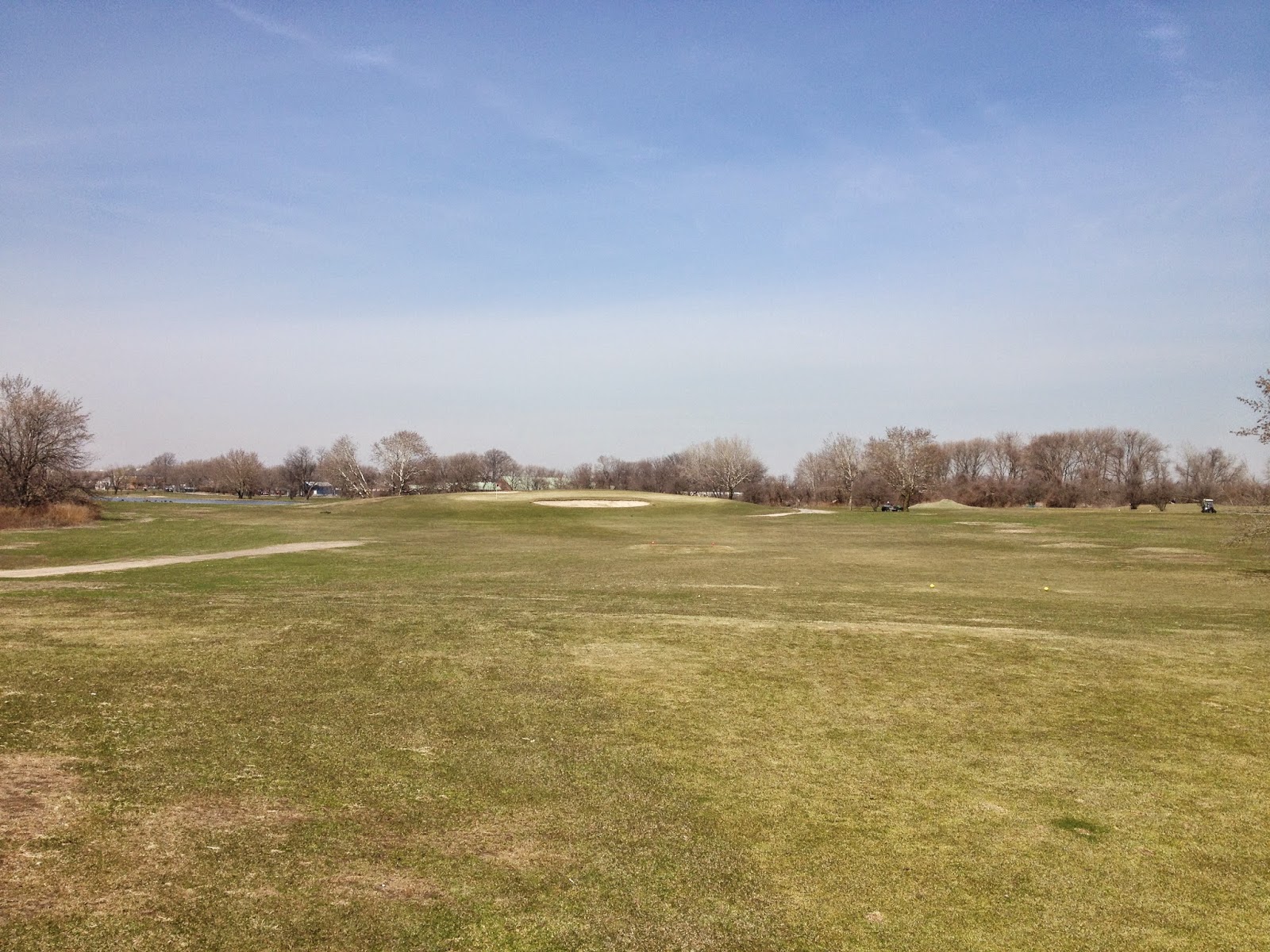 Pardon the language but the par 3 eighth hole is fuckin' crazy. 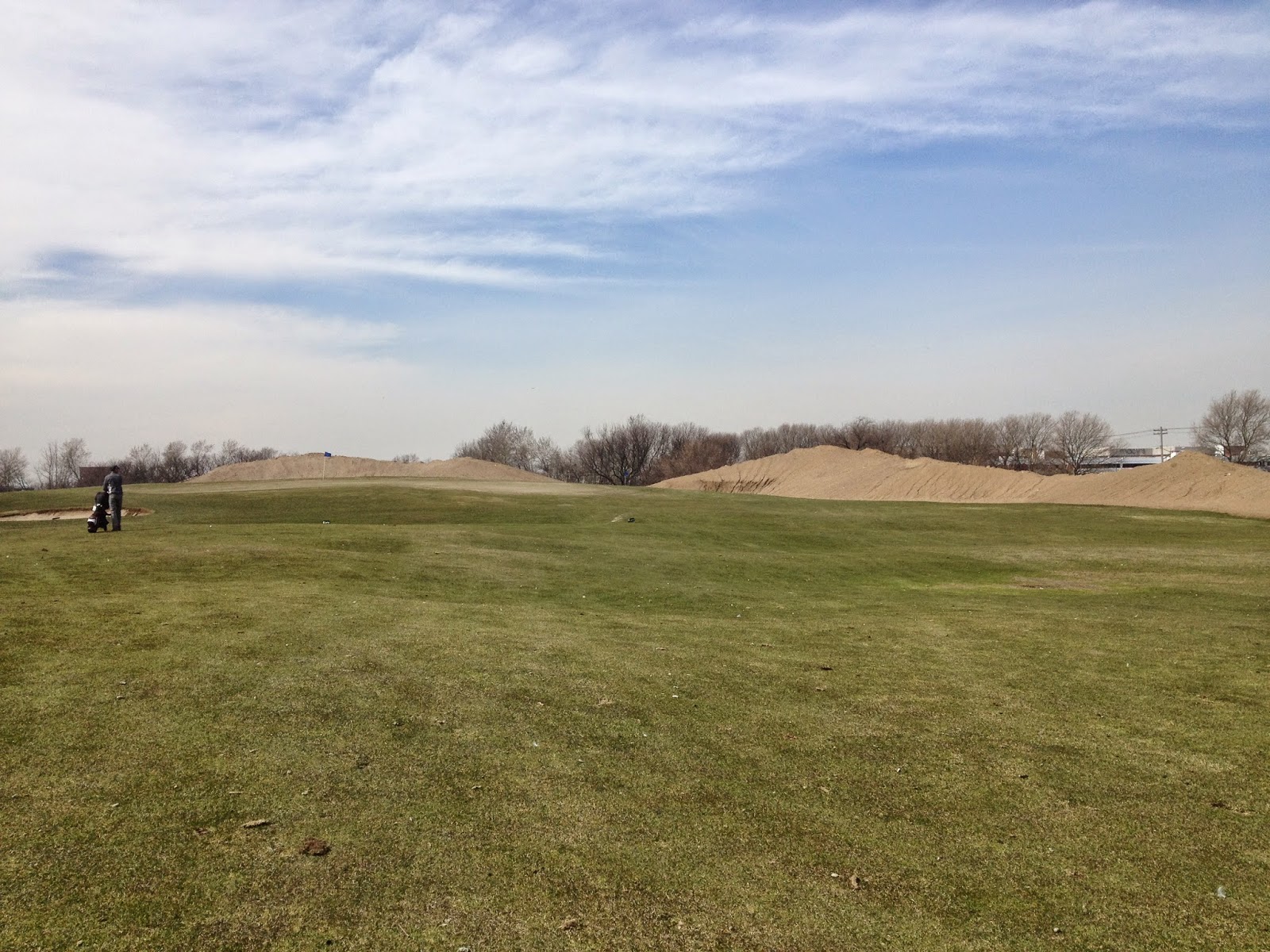 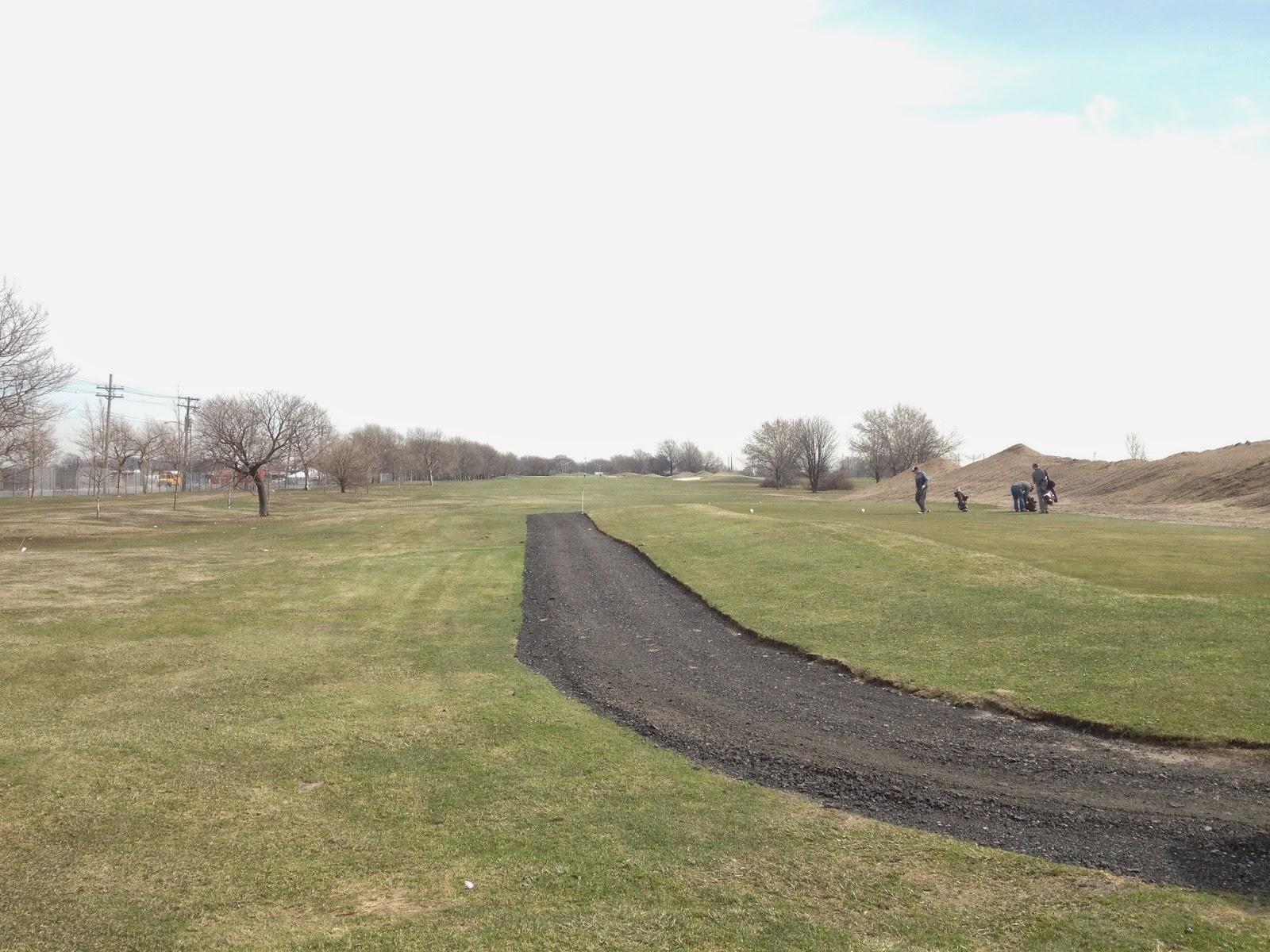 Looking down the pipe at the superlong par 5 14th, blasted in the face with wind, a green in regulation doesn't even seem feasible here. As it turned out, it wasn't. Not for me. 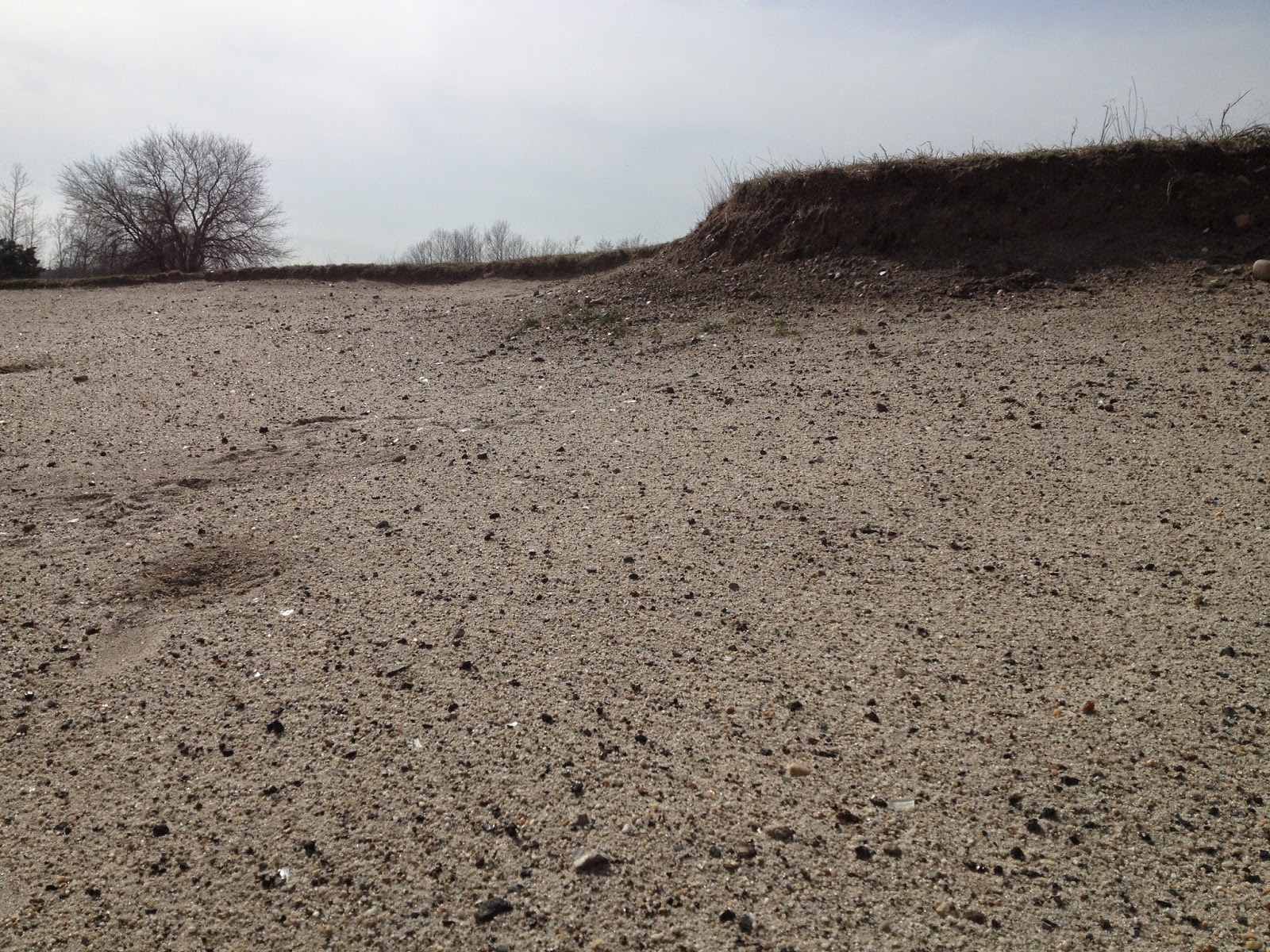 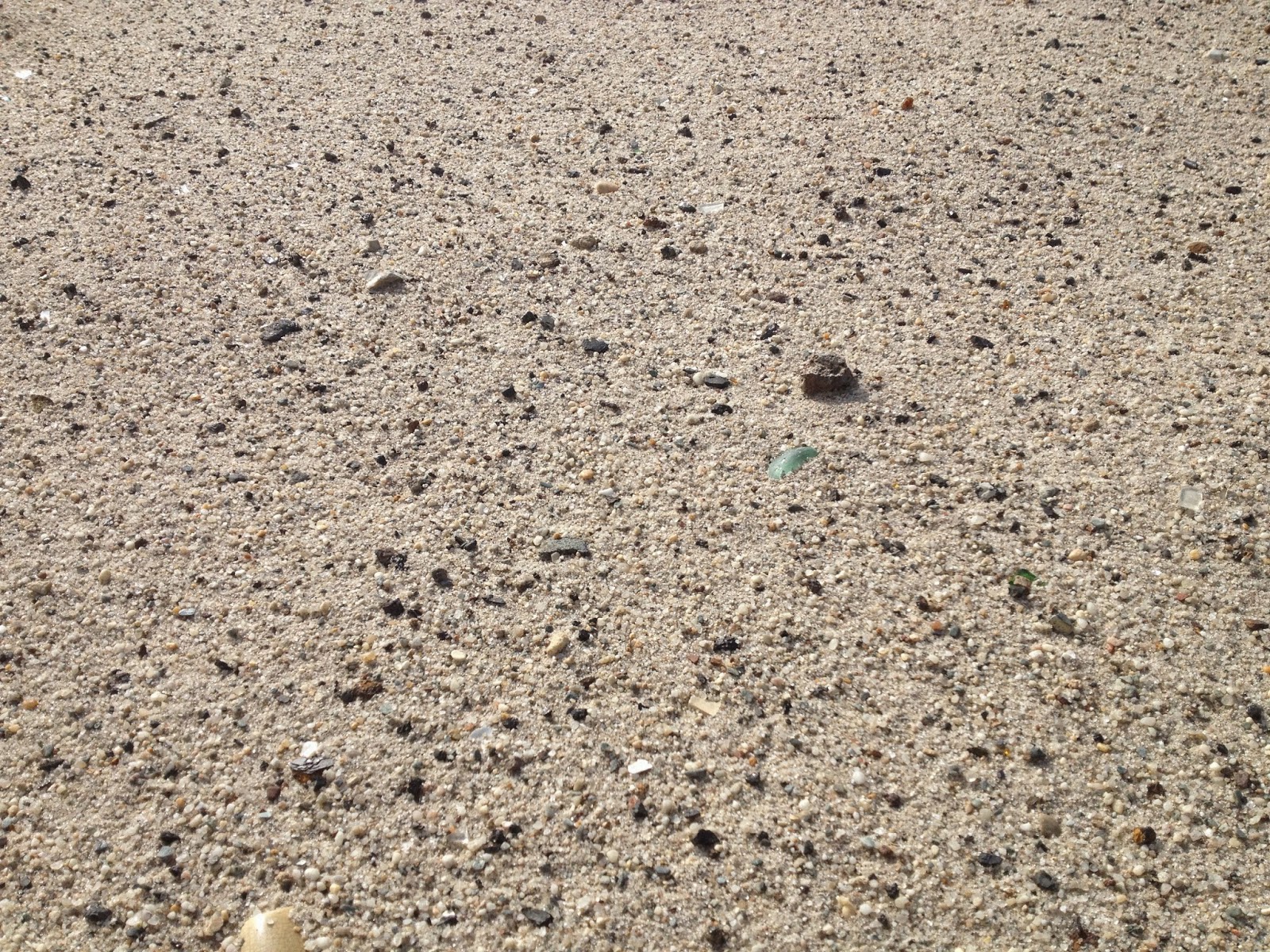 The rest of the round was kind of a blur of wind, rocky lies and scary putts. Bad breaks everywhere. Towards the end I hit into this fairway bunker and kind of got exasperated at the whole course itself. To be fair, I guess the rules allow you to pick out shards of glass from a bunker.

Whatever, another day, another bloated score. 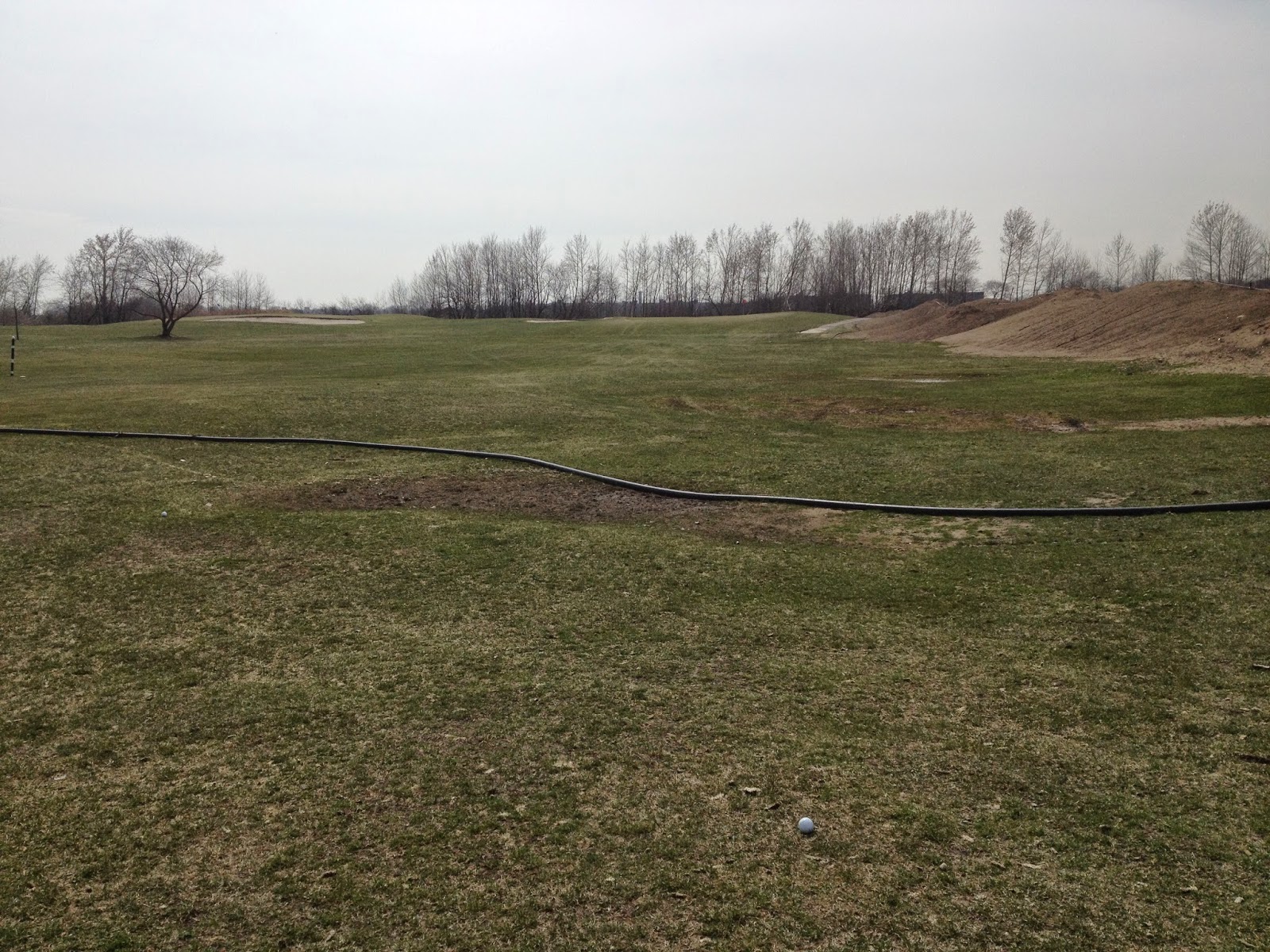 As I mentioned, it's been a rough spring so far. I mean, you see the photos. You see that spring has not exactly sprung here. It's cold, wet lately and every day the winds blast you in the face. It's handicap season and yet courses are still in crappy, patchy, winter conditions. And right now, my game's in the same condition. I'm going to let it out all out there. My last five scores, starting with this one are

Ok, so the two highest scores happened at strange unfamiliar courses. Still they are quite high. And the other three are from courses that I know on an intimate level. Taken together they are the scores of somebody who does not appear to have much control of a golf ball.

It is all downright disappointing for someone who once carried a single-digit handicap. Let's not get carried away though. I think that I have an idea of what's important in life, and this is almost completely meaningless. It's okay, this is not a cry for help. It's not an attempt to elicit sympathy or coddling. It's just me, telling you, what's going on.

Thinking back to some of those guys I played with that day, or one of them in particular, and how quick they were to formulate excuses, or modify rules for the sake of making themselves feel better about shitty play. F that. I'm going to take an opposite approach. I'll blame only myself--and hard--for my shitty scores.

Of course you could say, Hey man, those conditions are terrible. Barren, soggy turf, plugged balls, mud and casual water everywhere, and for god's sake the erratic, ungroomed greens. But then what about my tendency of playing "golf swing" on the course lately? Taking forever over the ball, overanalyzing, trying too hard to make the perfect swing, everytime, etc. Surely that's not good for scoring either.

You could say, This terrible weather! Please. Whatever havoc a little cold, rain and wind might play on my scores, it can't be any worse than my clueless/hit-and-hope approach to lag-putting as of late. Also I am no stranger to the mid-Atlantic breezes. I've shot good scores in windy conditions. Wind is more common than no wind in any given NYC golf round, so there goes that excuse.

Since it's all on me, what do I do about it? The answer--nothing. Because I'm already doing what I can. For a recreational golfer, I'm already militant and gung-ho enough about scoring as is. And while I refuse to self-coddle I have to concede that I am actually trying my best. It's not like I can't hit the ball. I seen some good shots out there. So what more can I do besides enlist the help of a certified professional, or put myself on a psycho practice regimen. But, no. To go any further would be to go off a proverbial cliff, and that's not what I'm going for, not right now.

So the answer's nothing, and the plan is keep grinding away--and having some fun while doing it of course. The lower scores will come (maybe we just need a bit of warm weather). Or, they won't.

Probably though, they will.
Posted by Legitimate Golf at 3:14 PM