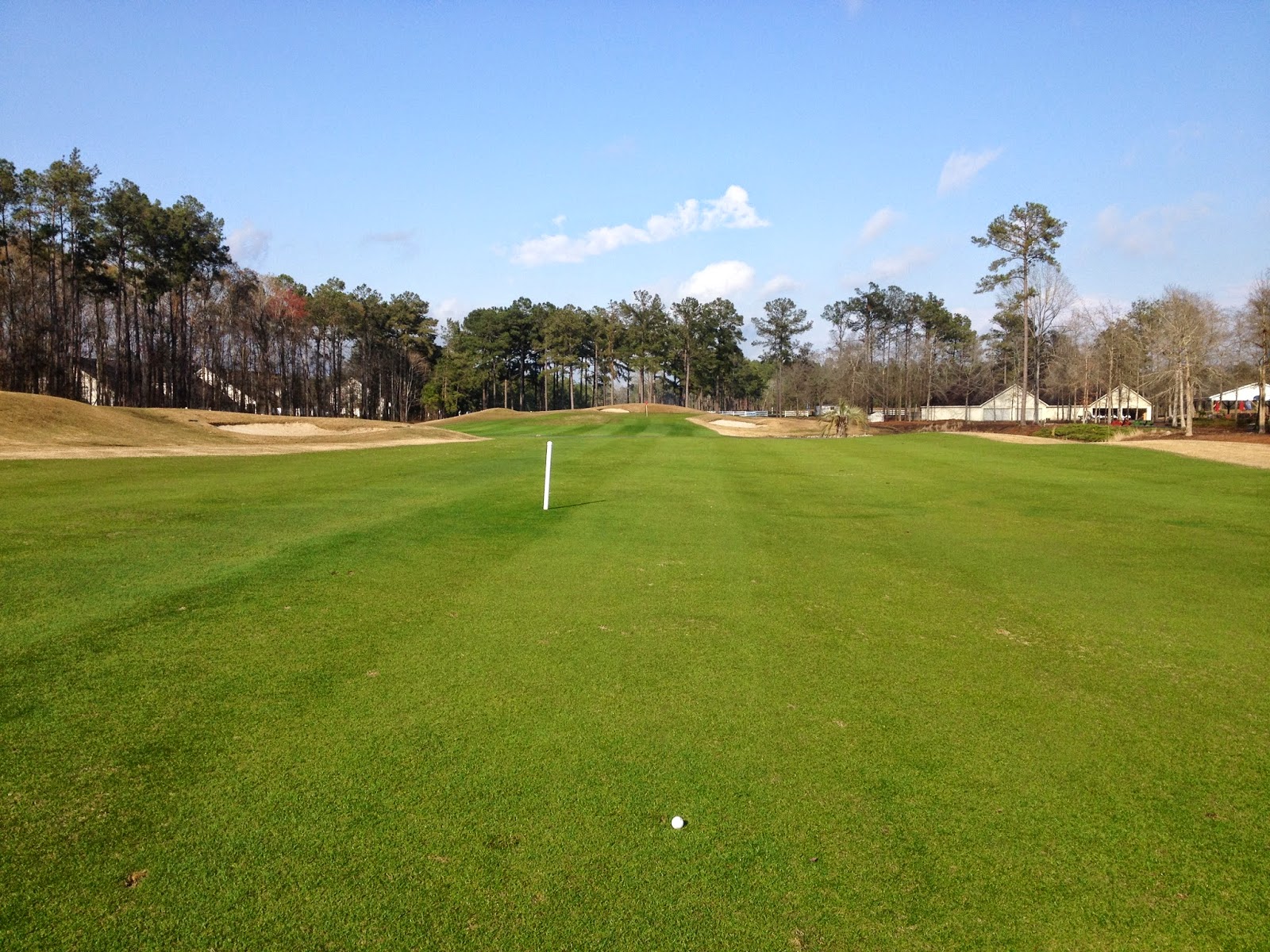 The Outer Banks of North Carolina was great, but we decided to press on southward. Since our itinerary was already straining the limits of practicality, and because hey--we're tourists, Myrtle Beach was a natural destination. It's not too far below the state border and well, there's that little thing about more golf per capita in Myrtle than anywhere else in the world.


But again, this trip was mostly about hitting the road, seeing places and sights never seen before, doing some cultural sampling, etc. So it was decidedly not a golf vacation and if this all seems unexpectedly apathetic well, what can I say. Sorry if you were hoping I'd go on some kind of unhinged, orgiastic, golf-til-you-drop jag. That could've been fun, but I guess I'm just not a huge vacation golf guy. I mean vacation golf's great, and I enjoy it when it's there, but it's not something I ever daydream about. Maybe I'm just more of a whenever golf guy. 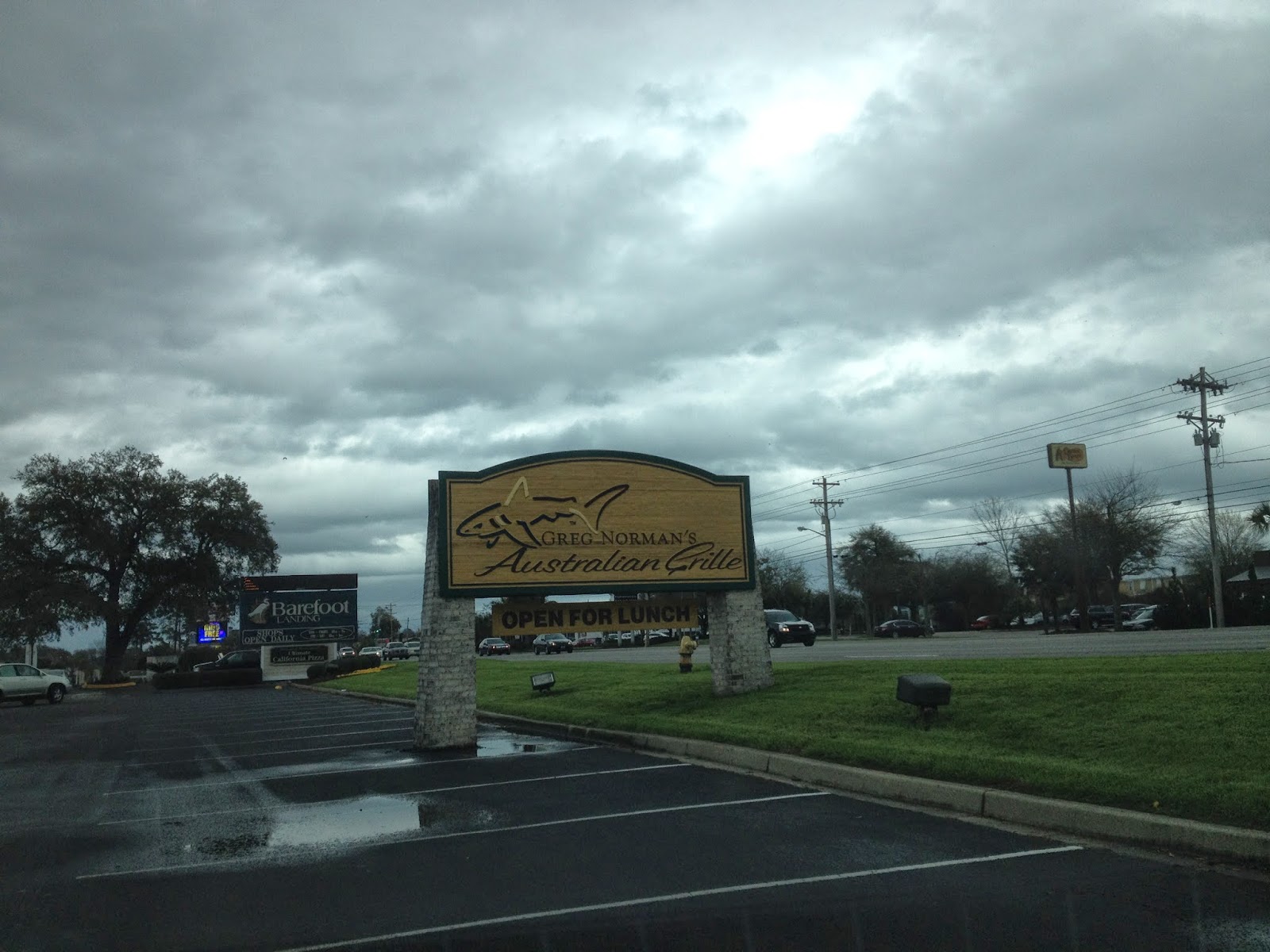 Driving into Myrtle though, Ms. Legit said something about how could a person like me go to Myrtle Beach and not play at least a little bit of golf. I thought about it and it did kind of make sense. 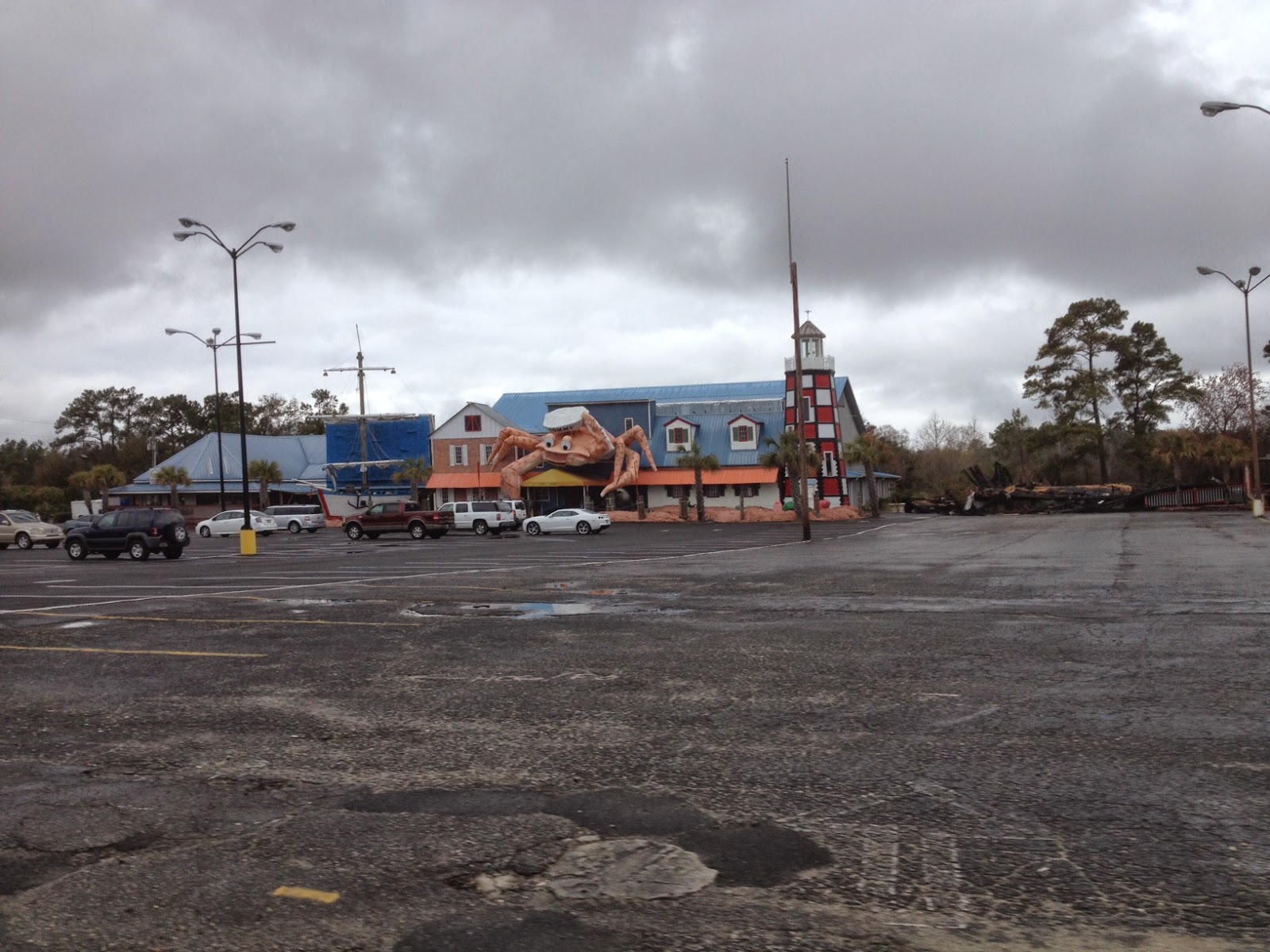 When we arrived, it started to make more sense. Just driving around it was plain to see that Myrtle Beach is a sort of Las Vegas for golfers. And pancakes. Myrtle is silly with pancake houses. And they looked charming enough that we took the bait and went into a random one, only to be disappointed by gummy flapjacks served up with "butter-flavored spread" and "maple-flavored" syrup, and coffee with non-dairy creamer. I didn't even finish the bacon for crying out loud. 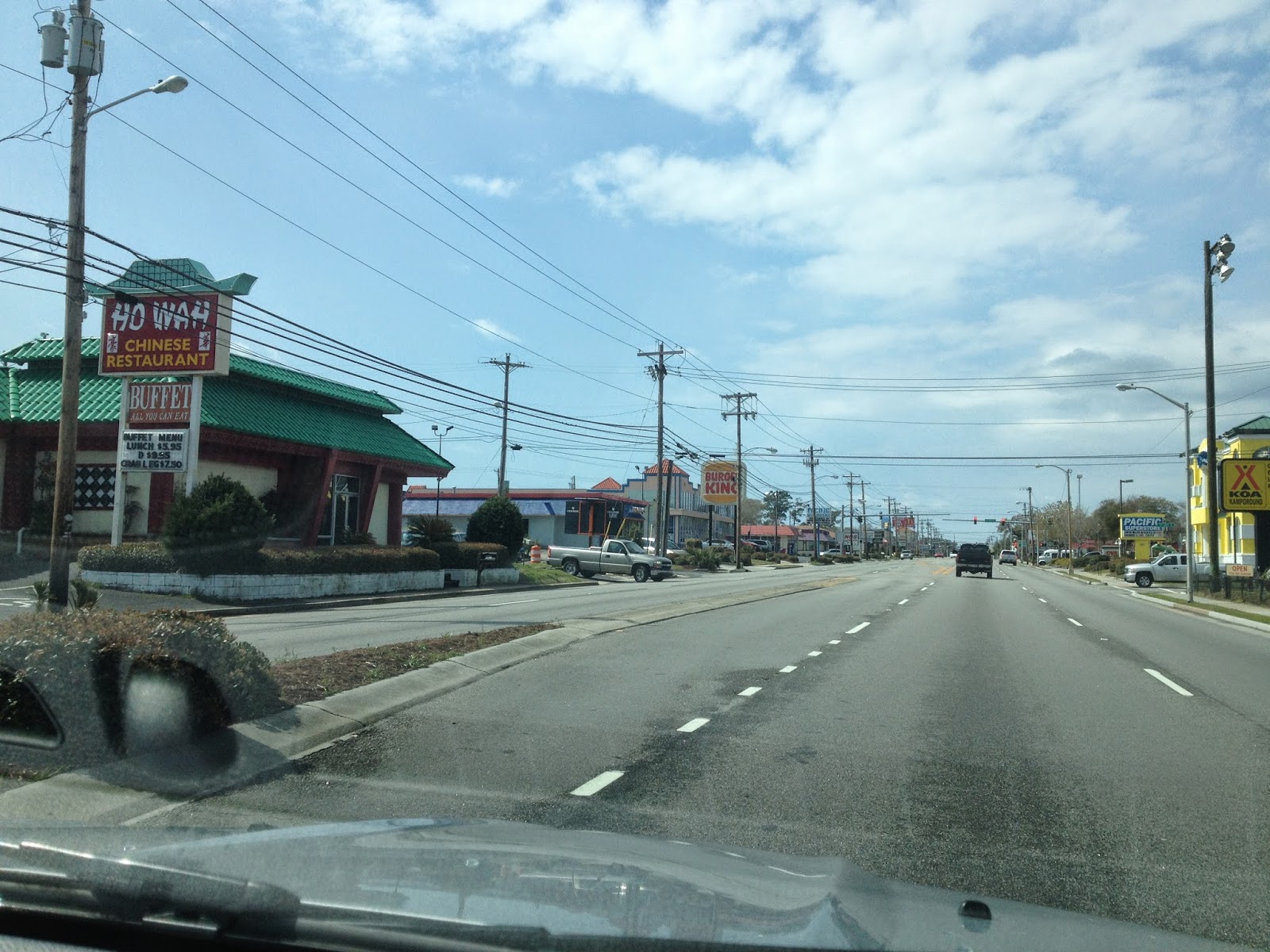 So I'm assuming Myrtle Beach is a relatively fair sample of what goes on in the greater South and if that is at all true... y'all eat crazy amounts of sugar. Breakfast, lunch, dinner. What you people call "sweet tea" is more like what people in the North would call "simple syrup". The next morning, we tried to have a blueberry muffin and a fruit smoothie at what looked like a nice little coffee place; what we got was more like birthday cake and a milkshake. Yet even though we're high-falutin city folk, in the spirit of when-in-Rome we didn't really turn our noses up at what we were served on this trip. (Though we steered clear of the various 150-item buffets all over town.) When we got back home we went on an extended, refined-sugar fast--true story.

That said, we had a number of really good seafood experiences down here, as well as a barbecue rib episode that was flat out life-changing. In a place like NYC it's easy to get tricked into thinking that everything is awesome here, including the barbecue ribs. But after just one perfect Carolina baby back, I immediately disowned anything good I ever said about a barbecued meat in the city. Comparatively, our "barbecue" sucks; it is dog food. Sorry to be so harsh, but I see the truth now.

I consider myself as afflicted as anyone who plays this game, but surprisingly being here in the golf capital of the world wasn't much of a soul-stirring experience for me. It was plenty amusing though, just checking out all the cheesy sights. 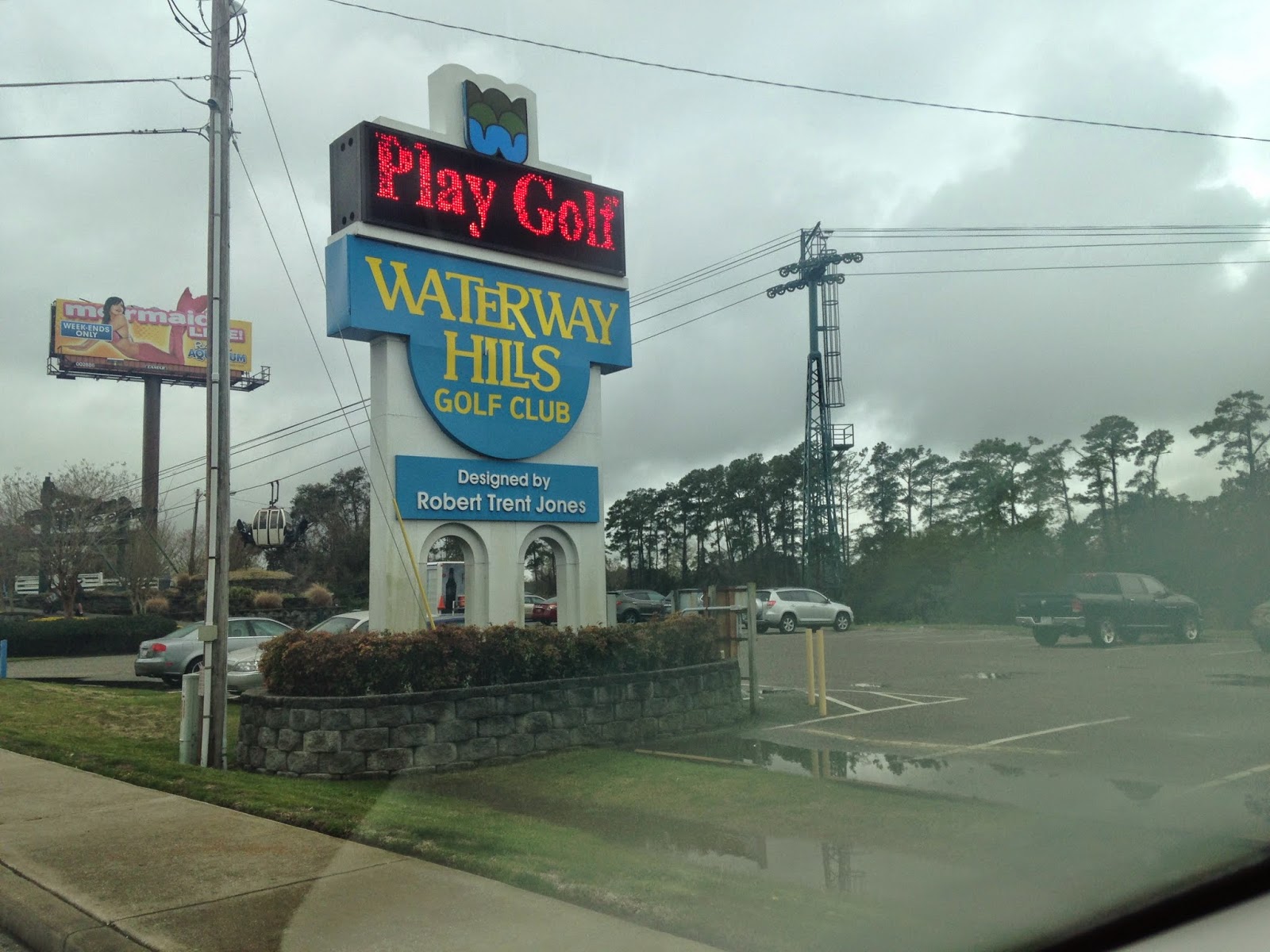 A ski-lift for ferrying golfers to and from the parking lot? Far out man. 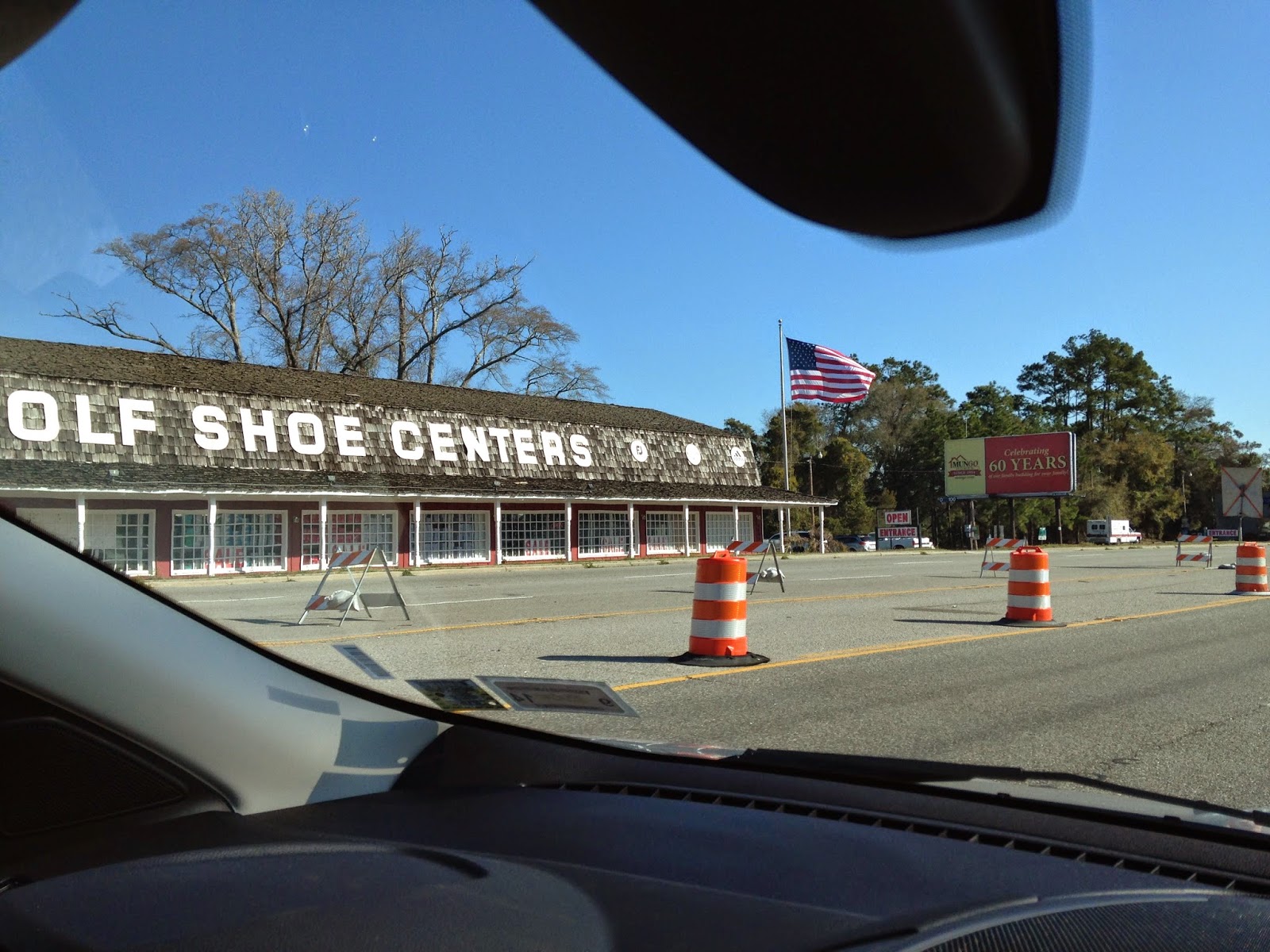 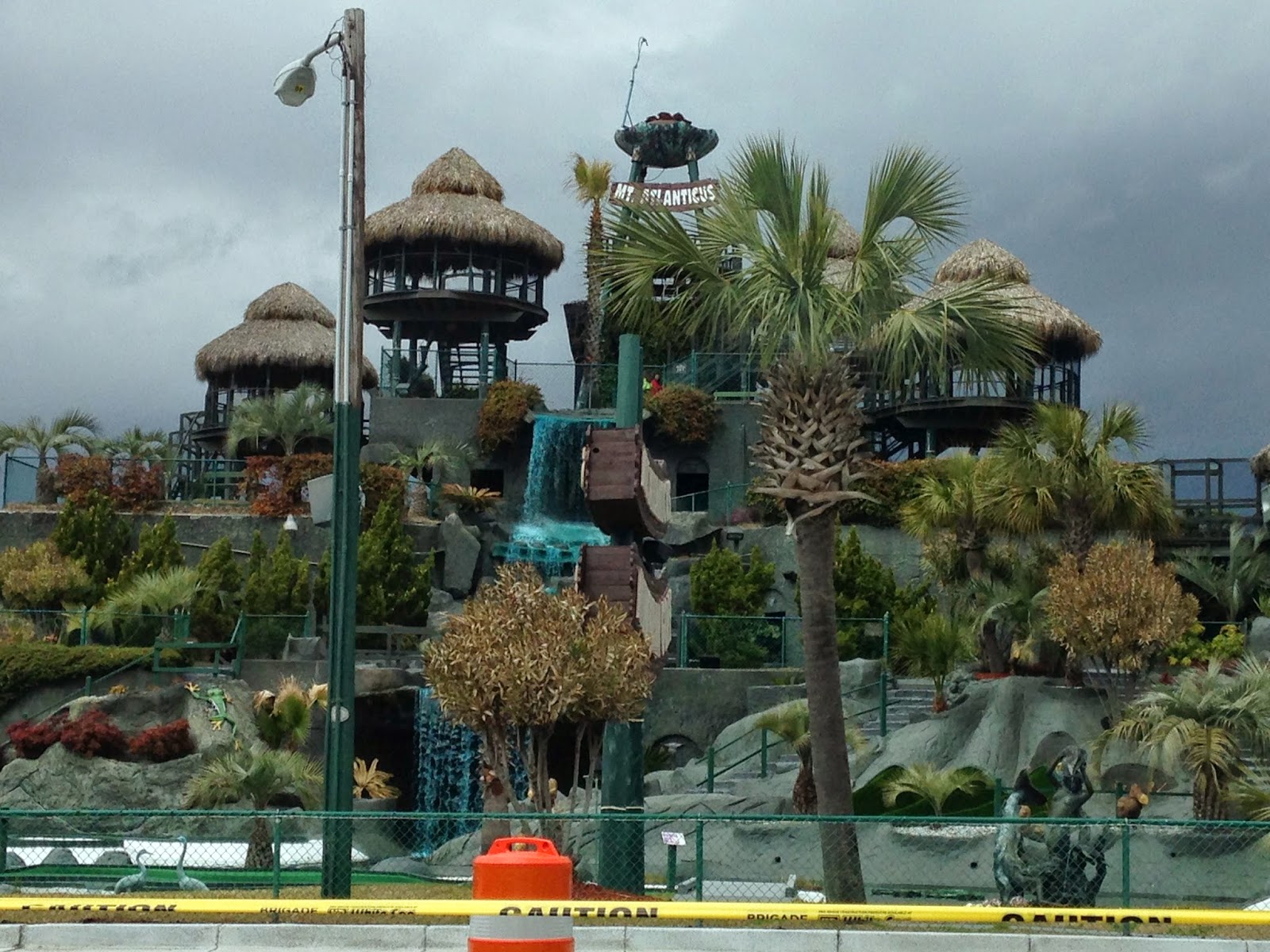 The number of courses, ranges, pitch n' putts, miniature golfs, golf shops, golf shoe superstores, golf cart dealerships, golf-tourist traps, etc., is truly impressive. Now of course there's lots of great golf regions in this world, but probably no single city anywhere that's golf-crazier than Myrtle. The mini-golf courses in particular impress not only in number but in scale and grandeur. (We would've played a round, but it was too freakin' windy and cold at night; we figured the fun-to-misery ratio would've been too small.) 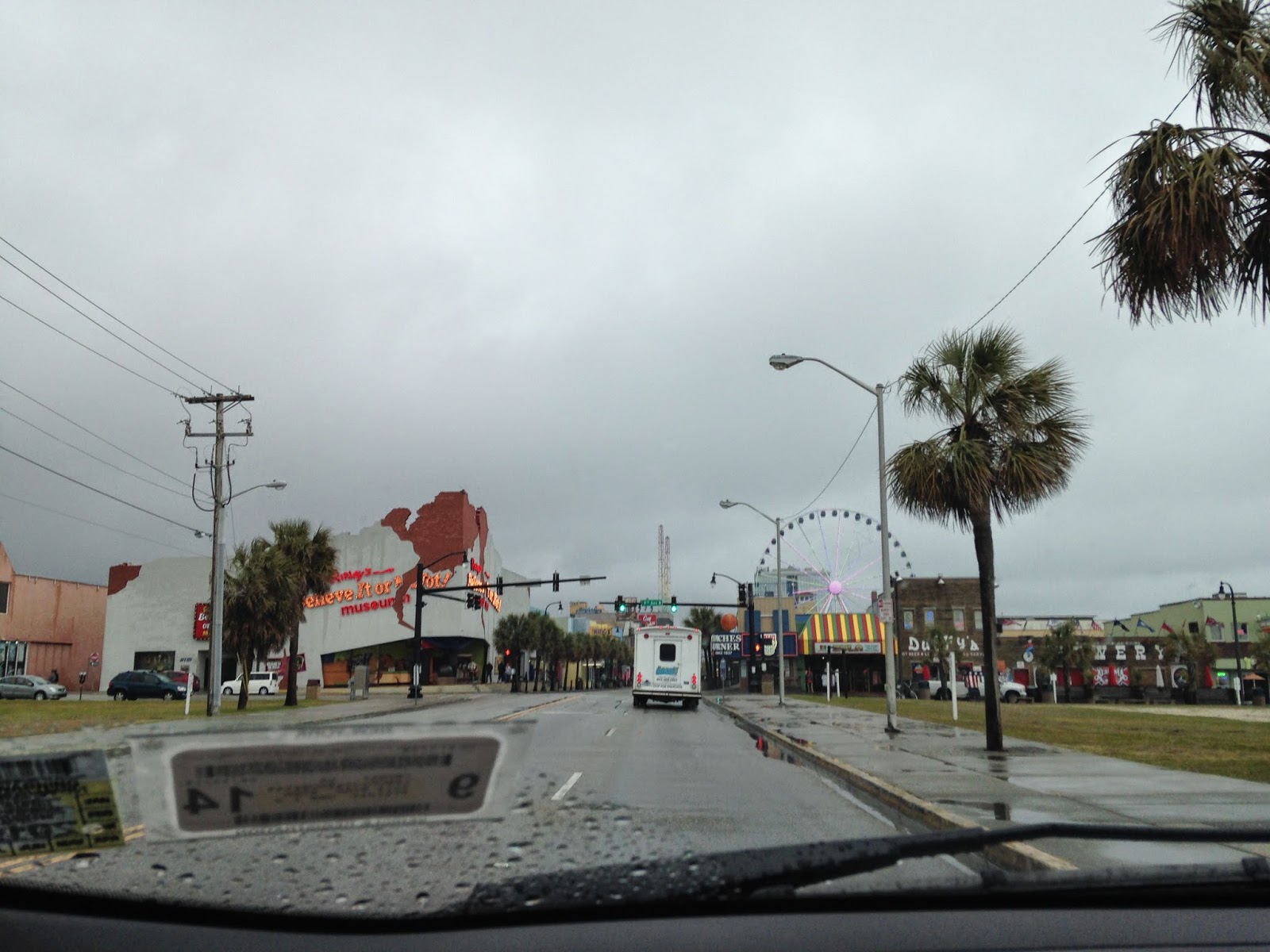 There's plenty of non-golf stuff to do in Myrtle, but besides the nice beaches, I got the feeling that most of the diversions exist mainly to entertain the unfortunate non-golfing relatives and family members who got dragged here on a golf vacation.

For anyone who loves golf with buddies, smoking cigars, hitting up the 19th hole then going out for steaks and chops, Myrtle is a kind of vacation golf nirvana. But that was not me. Nope, on this trip I was just some dude with a bag of golf clubs. I decided to play, but again with zero local knowledge I had to turn to the trusty smartphone tee-time app. I found something at a ho-hum but nice-looking track that happened to be not too far from where we were staying. 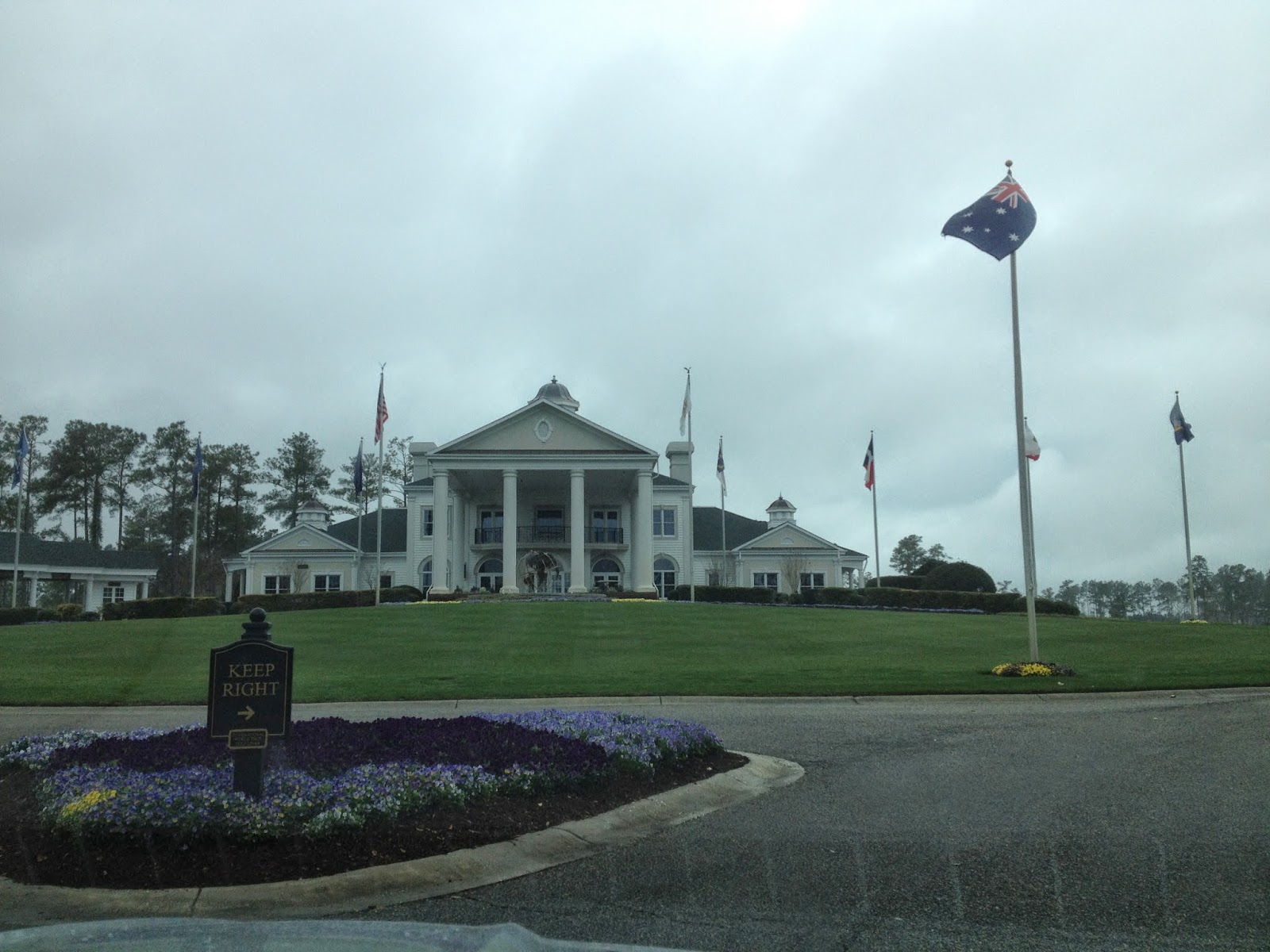 Thanks to a combination of human and GPS errors, I ended up walking into the wrong clubhouse and asking about my tee time at this much more expensive "World Tour" course--the one that's a kind of greatest hits compilation drawn from the world's most hallowed courses. The course where I'm supposed to be, the pro-shop guys explained, is the next one down the road. So drive back to the gate, make a right... it'll be on your right. God, they must've been embarrassed for me. I should've known by the palatial clubhouse that I was in the wrong place. 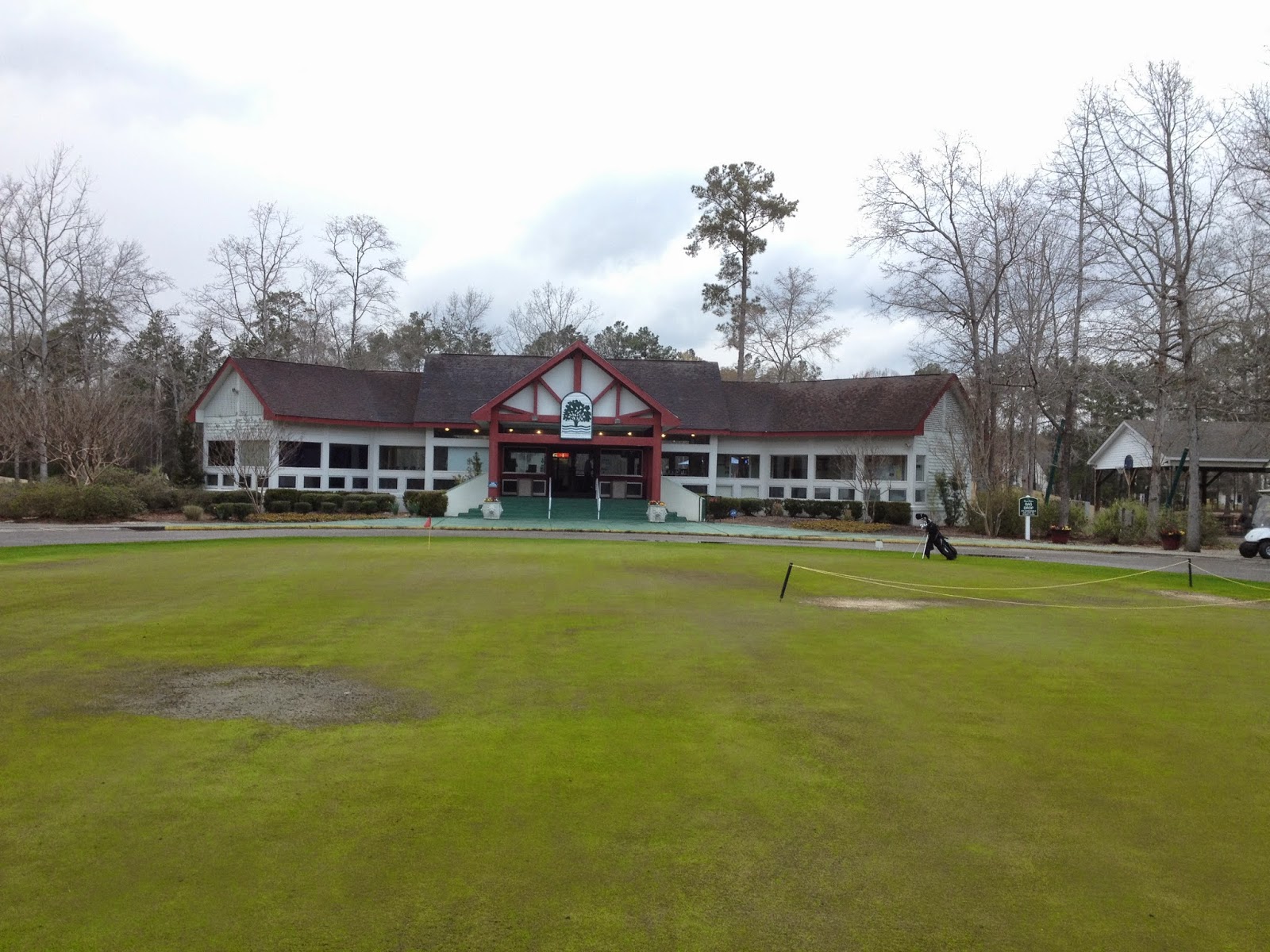 Ok, this place--River Oaks Plantation--looks more appropriate to the moderate greens fee that I just paid online. Although it's much more genteel than NYC muni golf, so I'm still out of my element. I won't lie, interaction with the bag drop guy was a little bit awkward. But hey, give me a break, what the hell do I know about bag drops. We don't have that back at public courses back home. 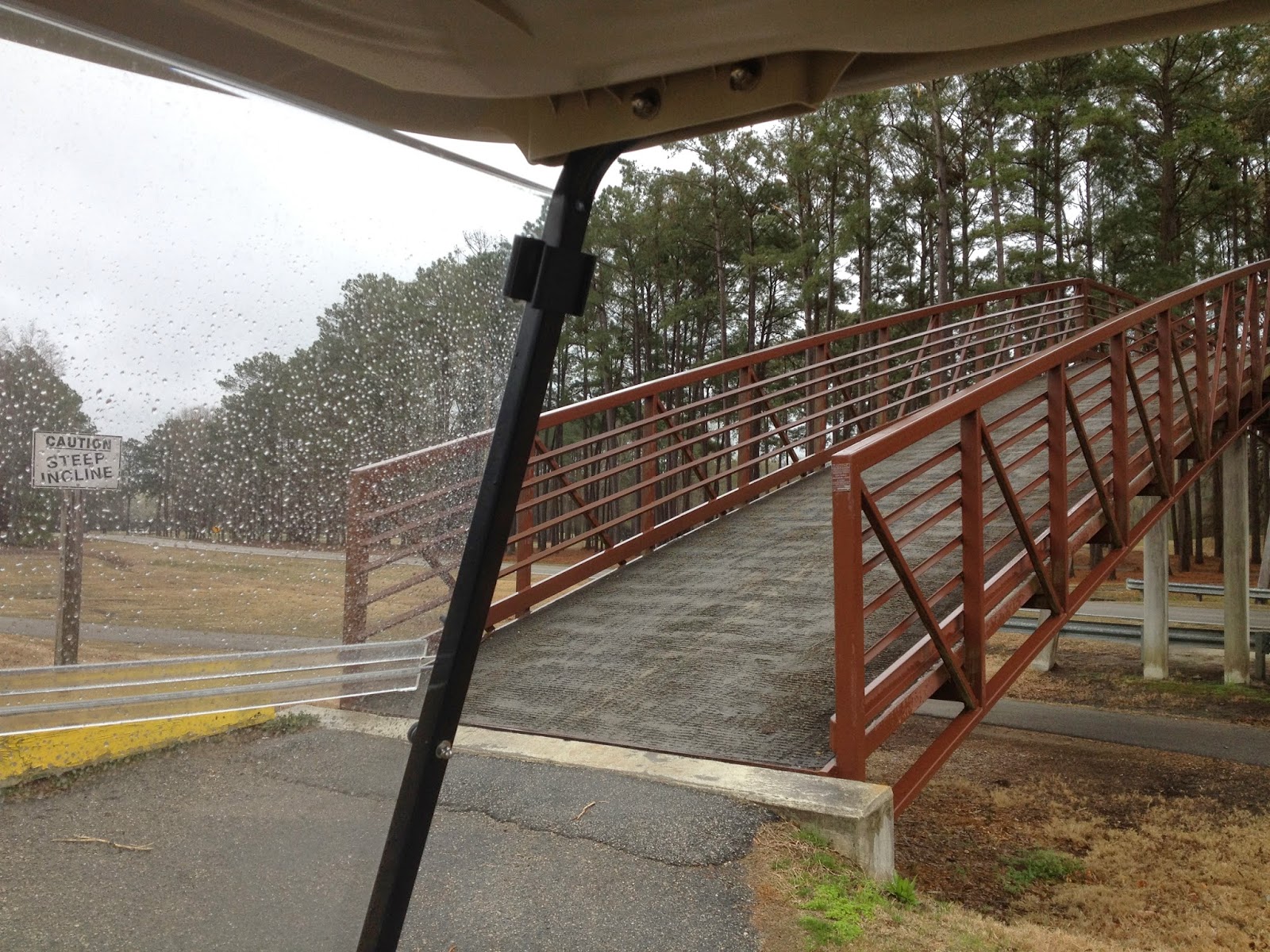 When the starter sent me on my way and said I'd be playing on my own, my spirits were raised. (What's wrong with me?) 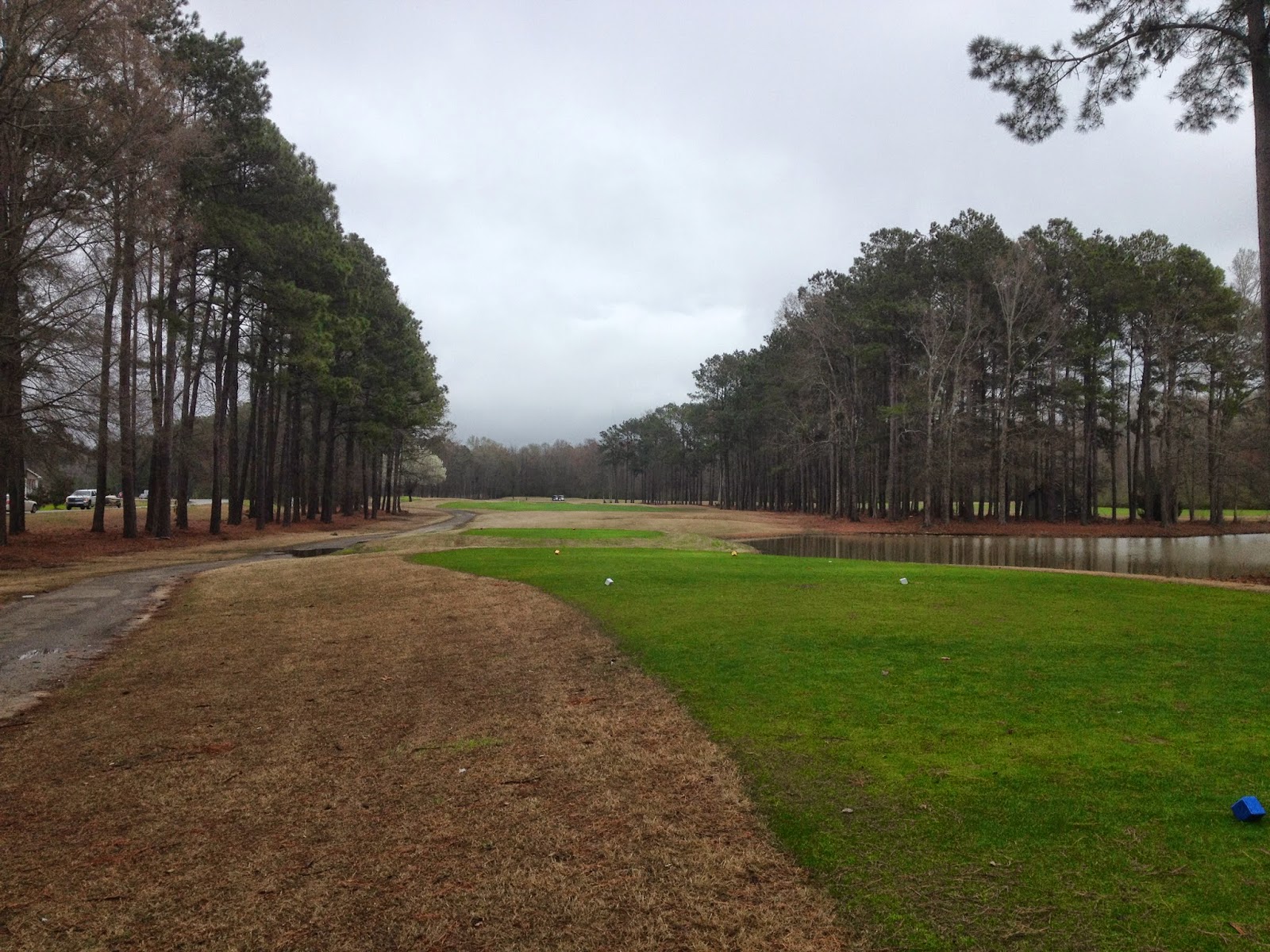 I know nothing about the course and what awaits me, but already just looking down from the first tee, everything looks so goshdarned proper. Straight and tall pines, shapely fairways, neat lawnmower stripes... the kind of classic archetypal golf scenery previously I'd only ever seen on TV or in video game versions of Pinehurst or Harbour Town. 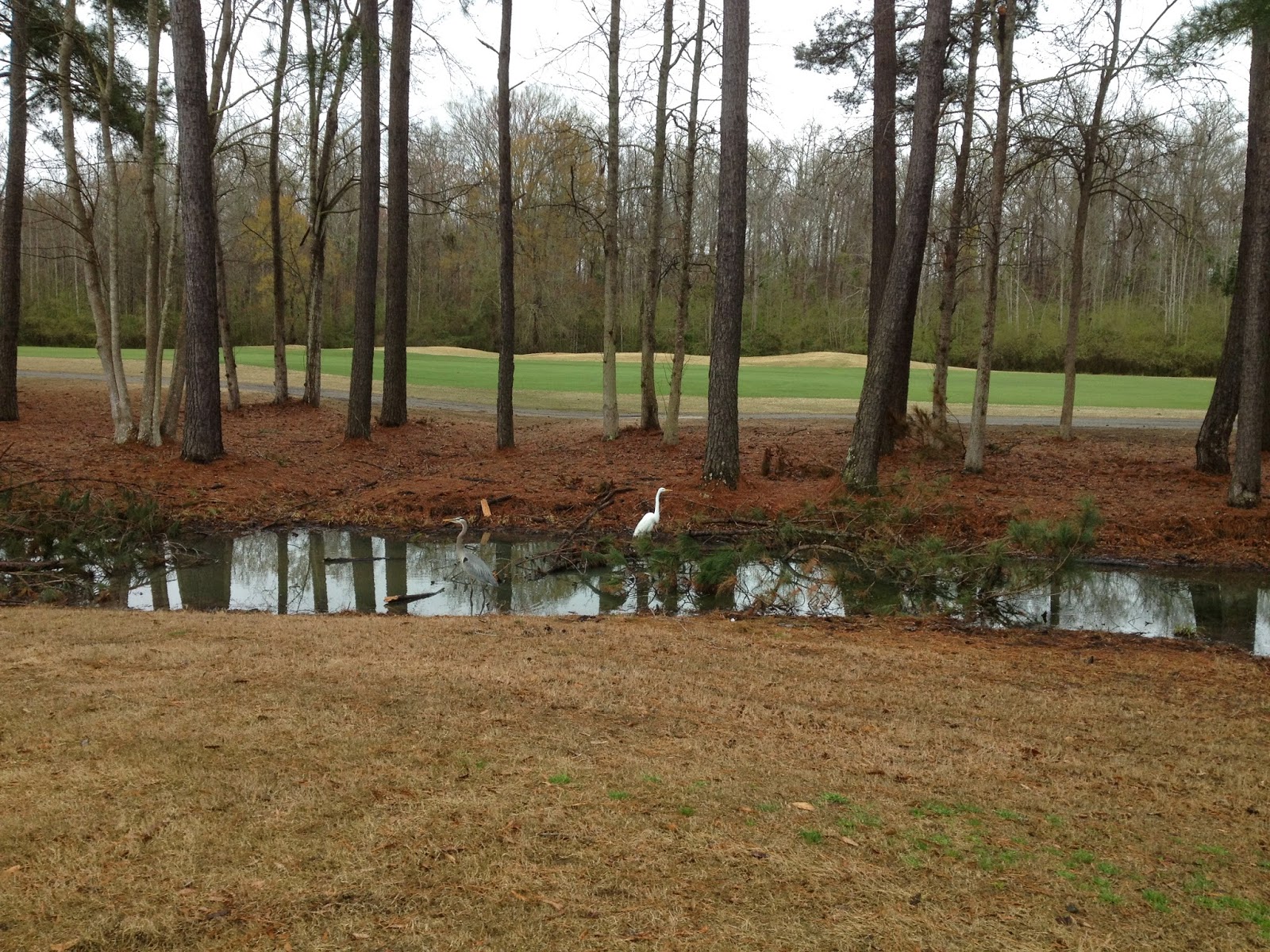 Dammit, will you get a load of these herons? 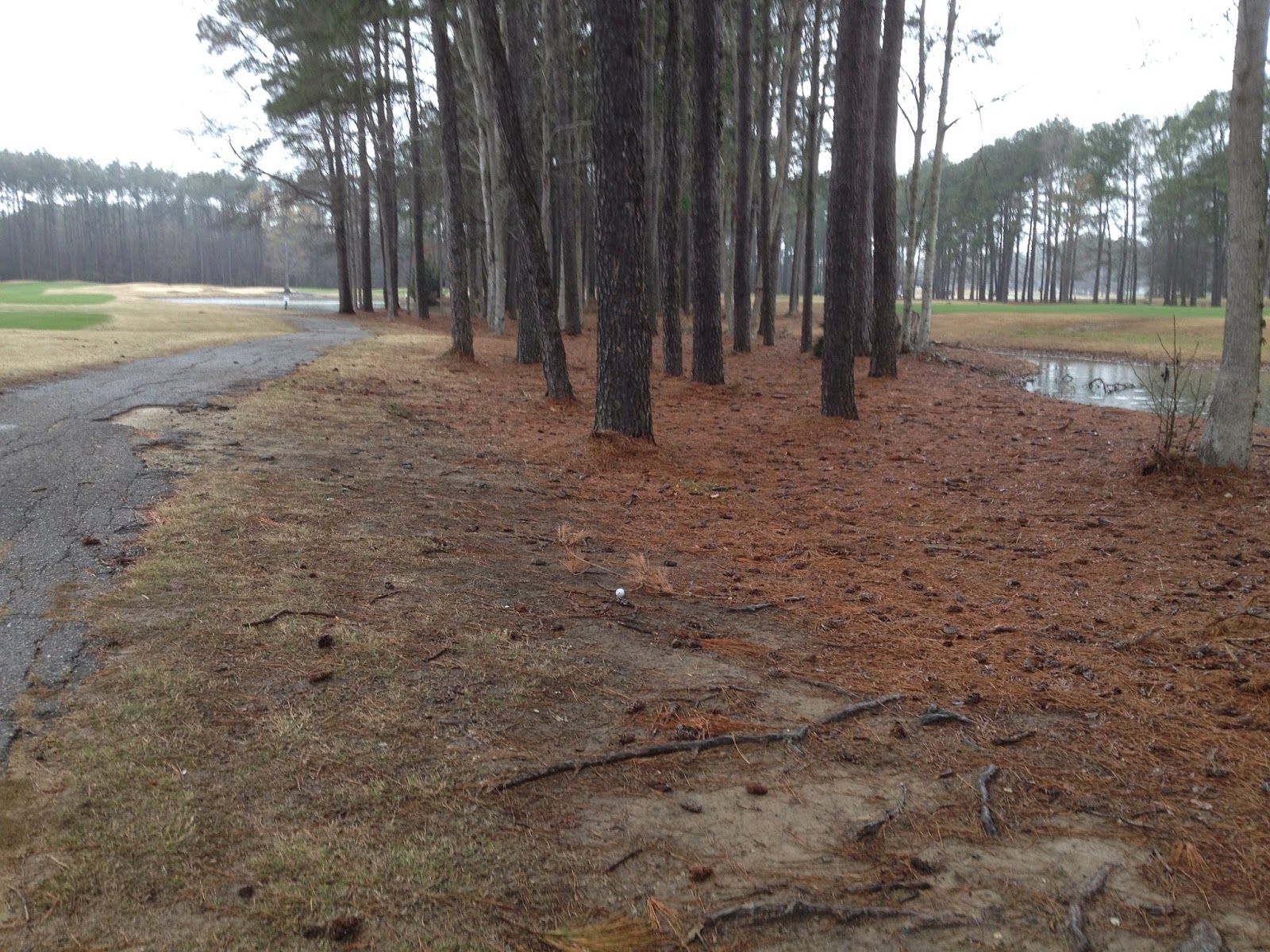 I love the pine straw. As far as trouble on golf courses go, pine straw is penal, without being overly uncouth. It doesn't try to gobble up your ball either. Pine straw--the civilized man's waste area. 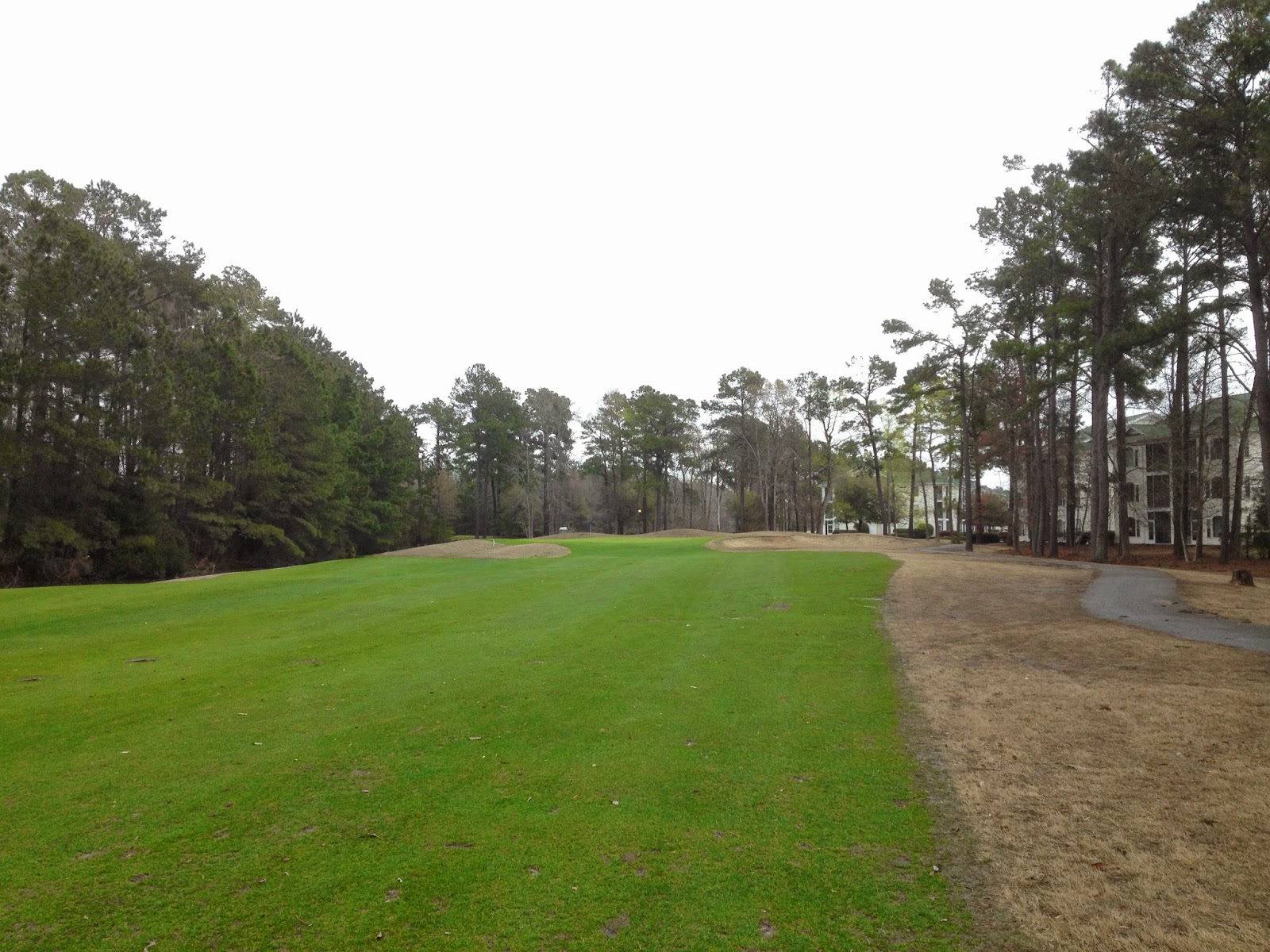 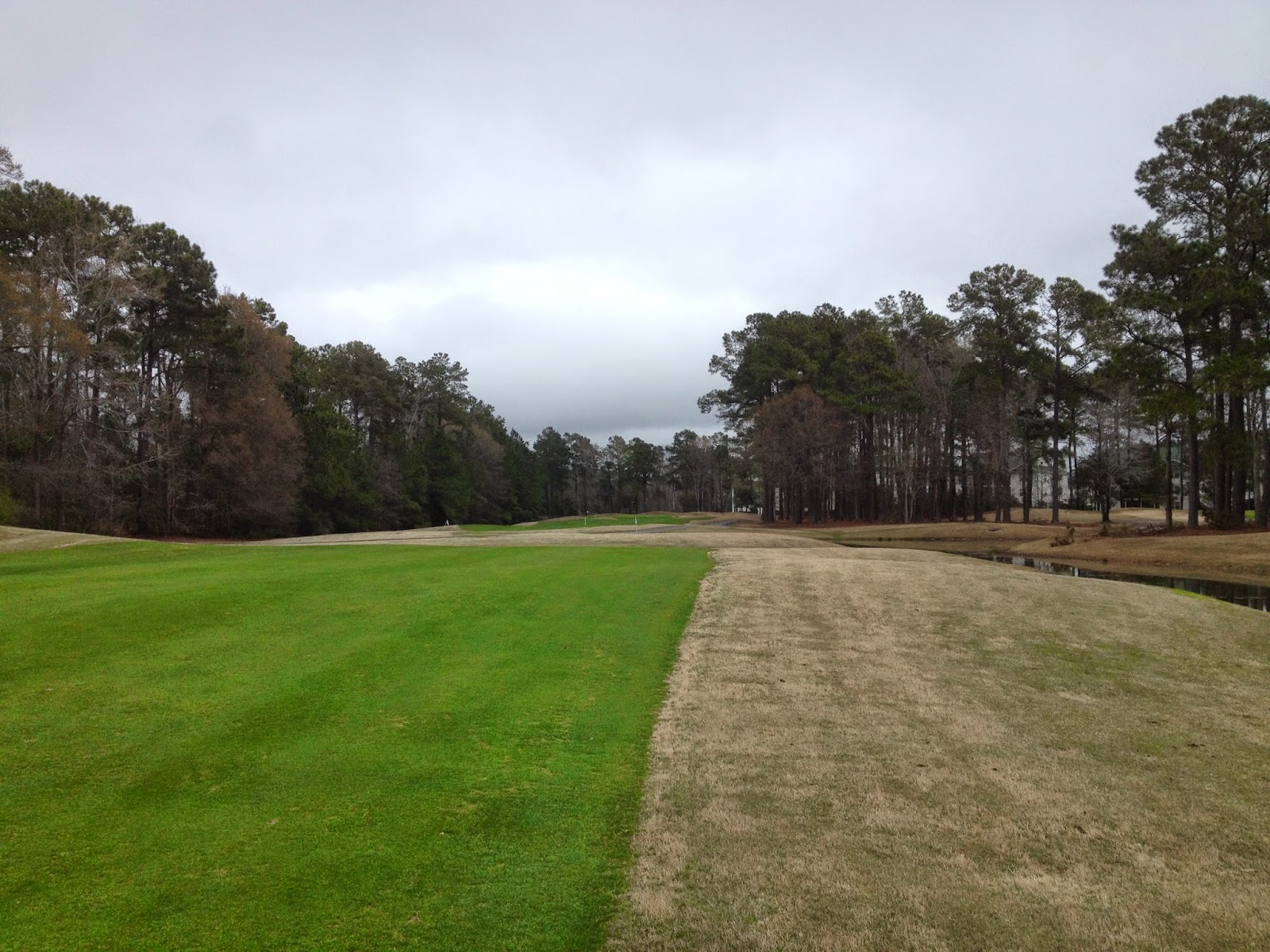 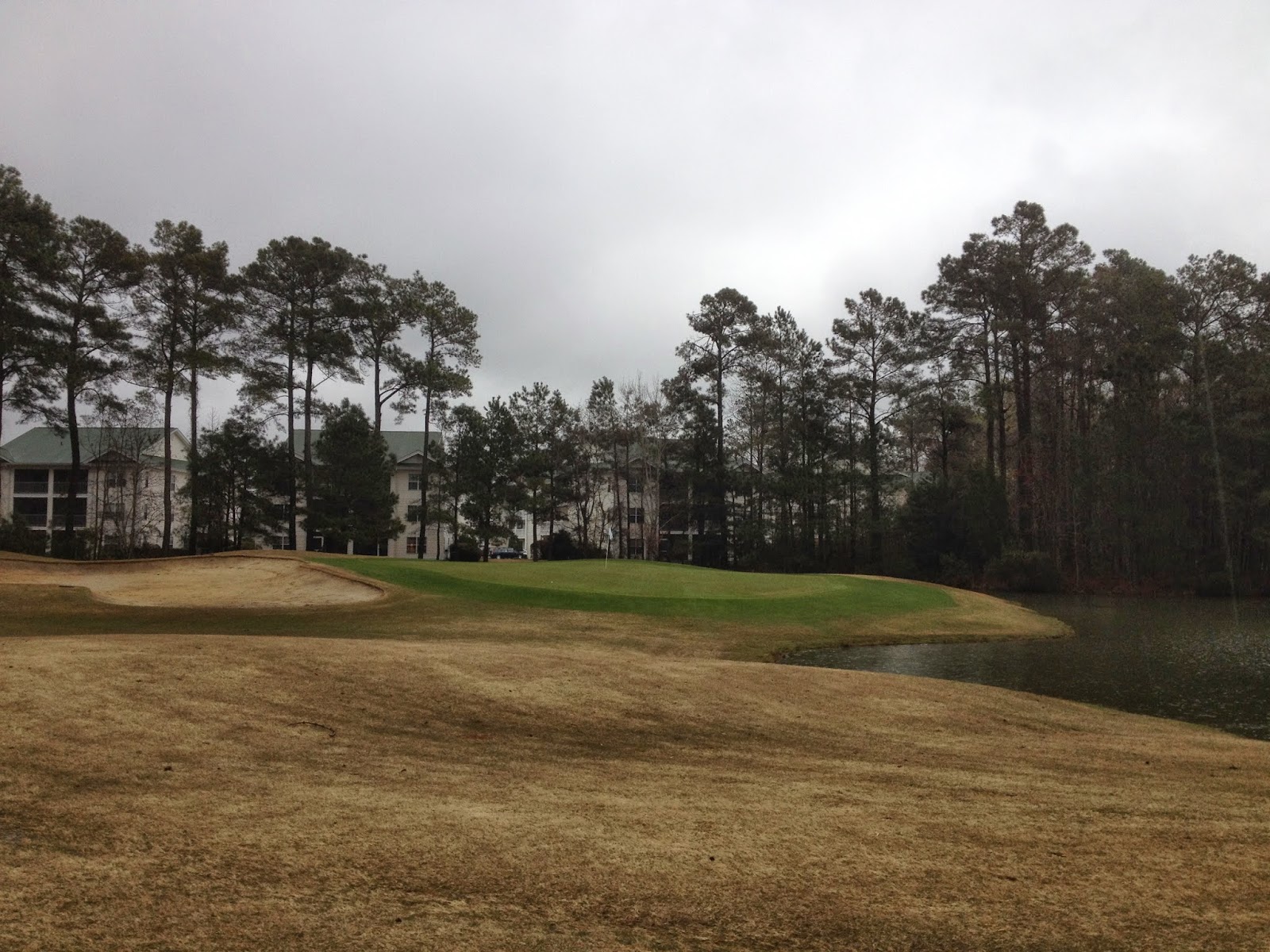 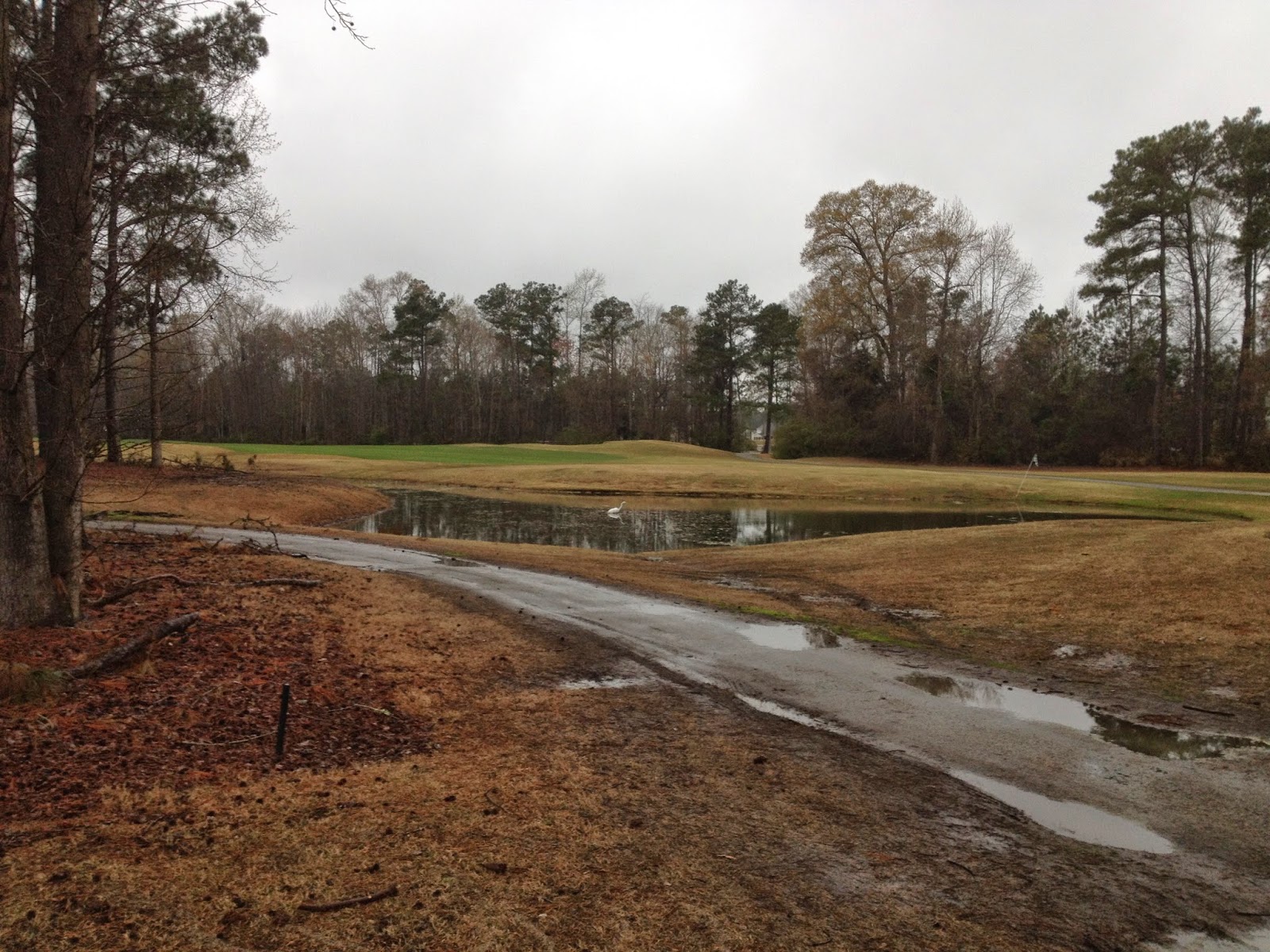 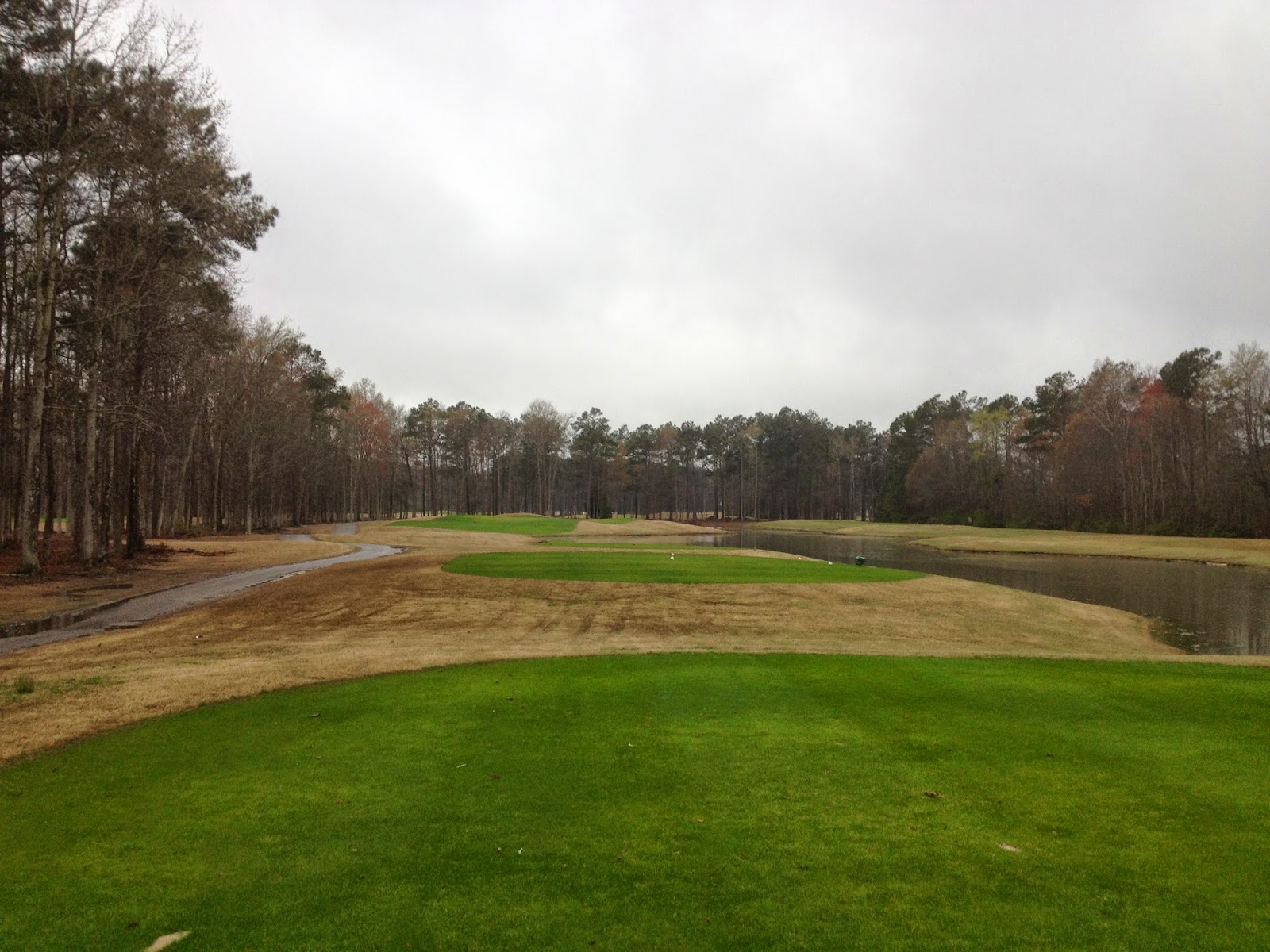 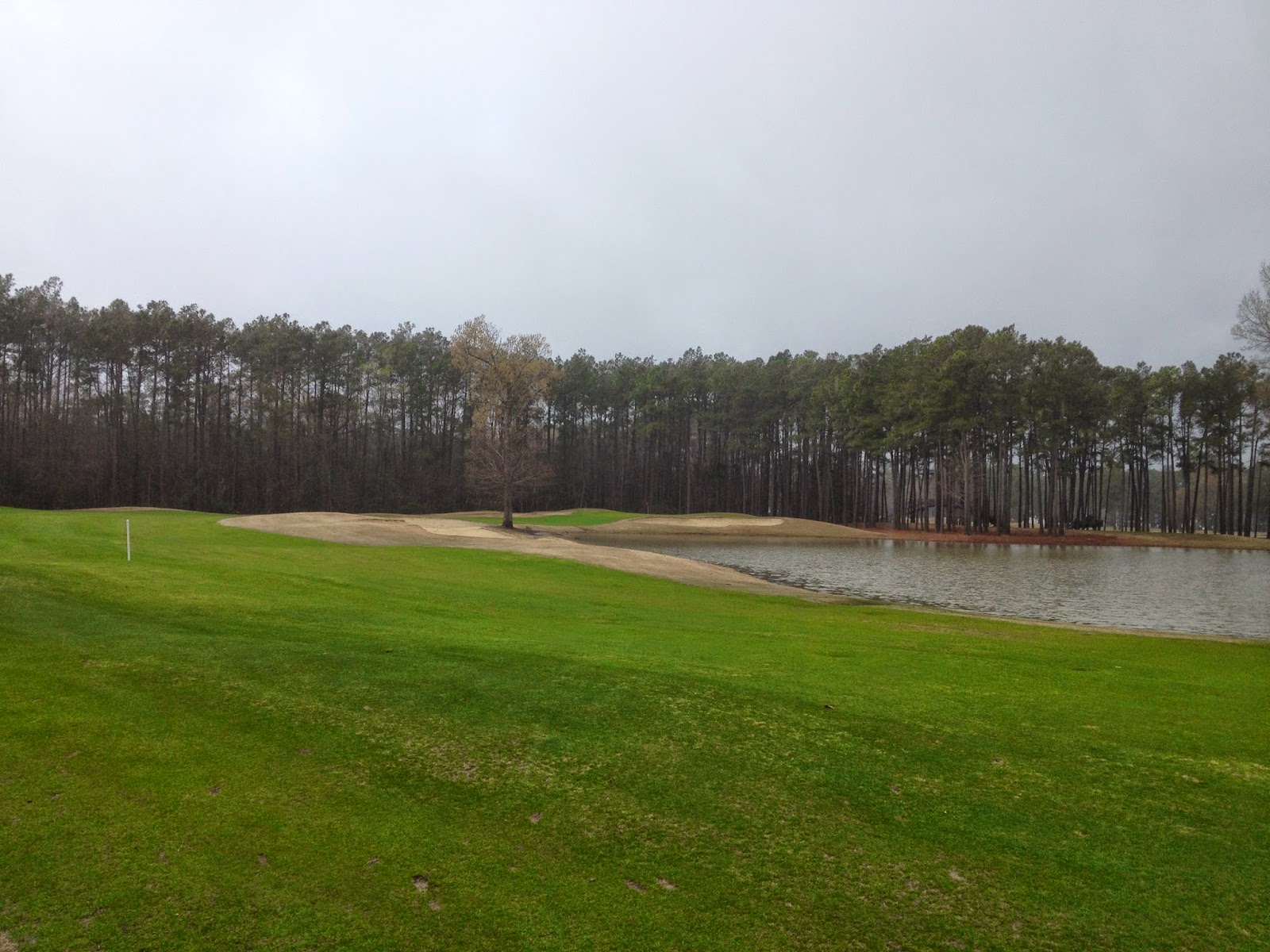 It's a watery course. But at least the powers that be are honest about it, with plenty of flags placed at water's edges to inform you of where the trouble starts. I'd never seen this done before, but it's a most civilized practice. Blind water hazards would be really uncool (and probably a recipe for poor repeat business.) 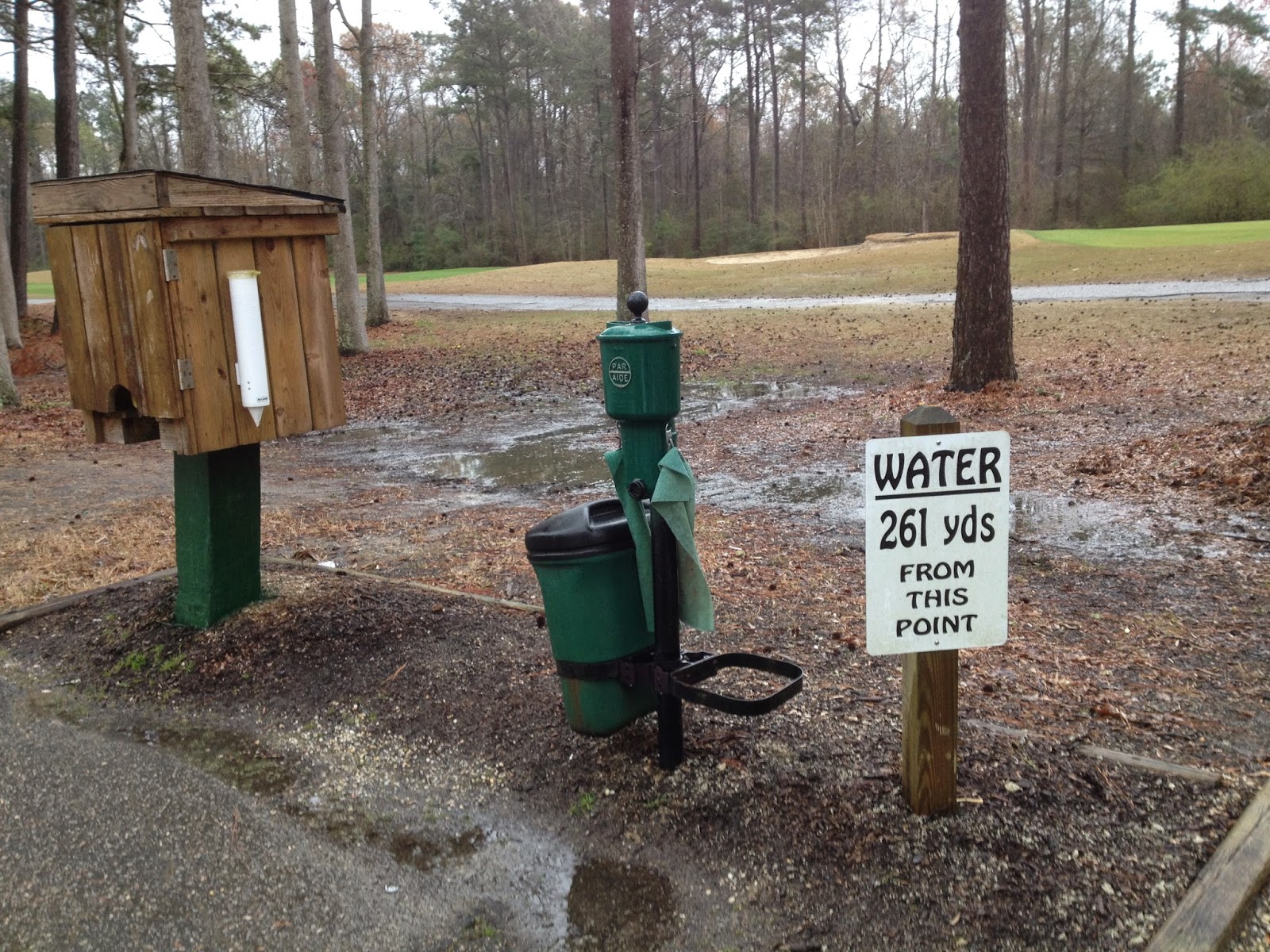 Southern hospitality ain't no joke. They really try to make you feel at home. 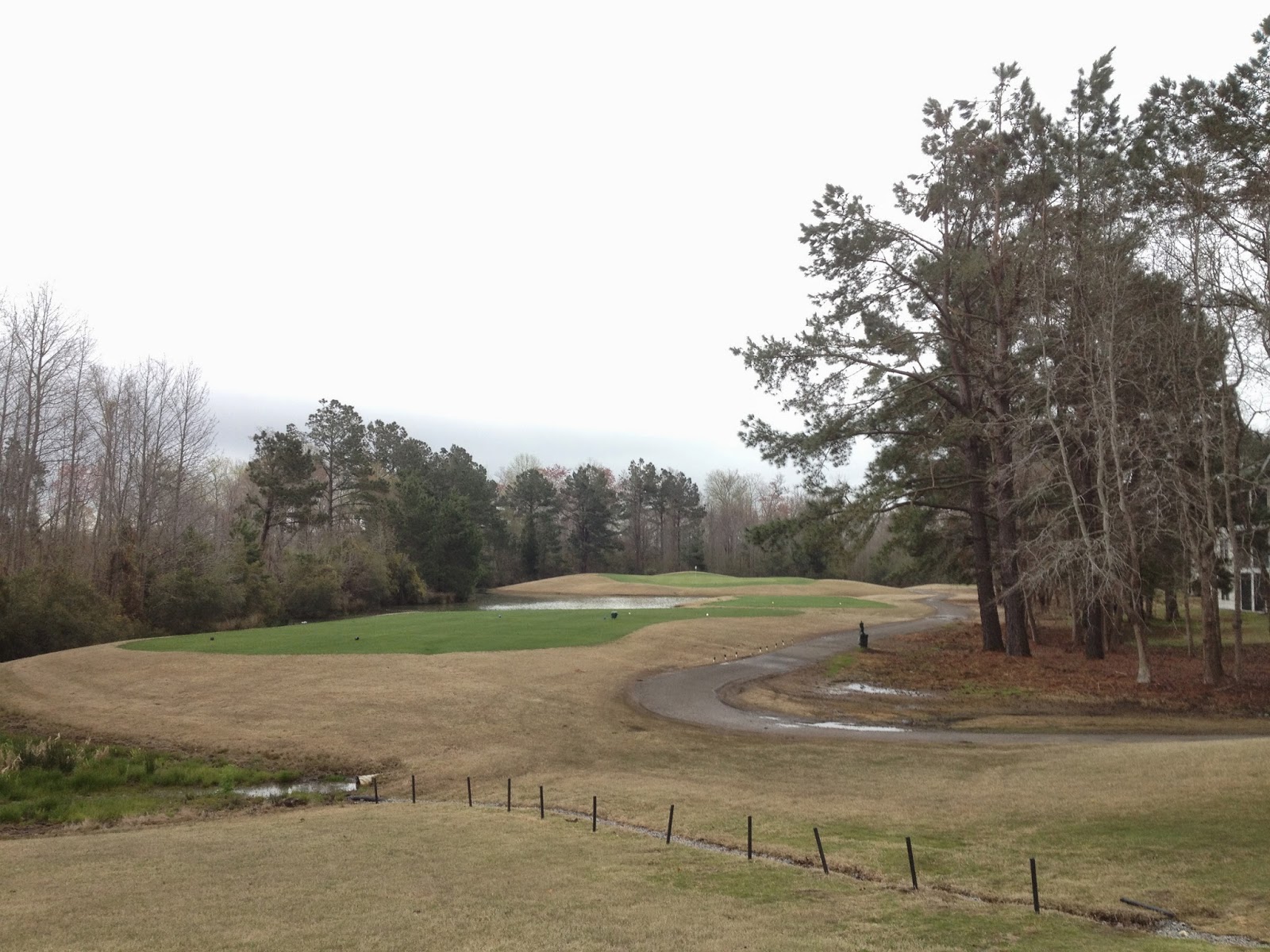 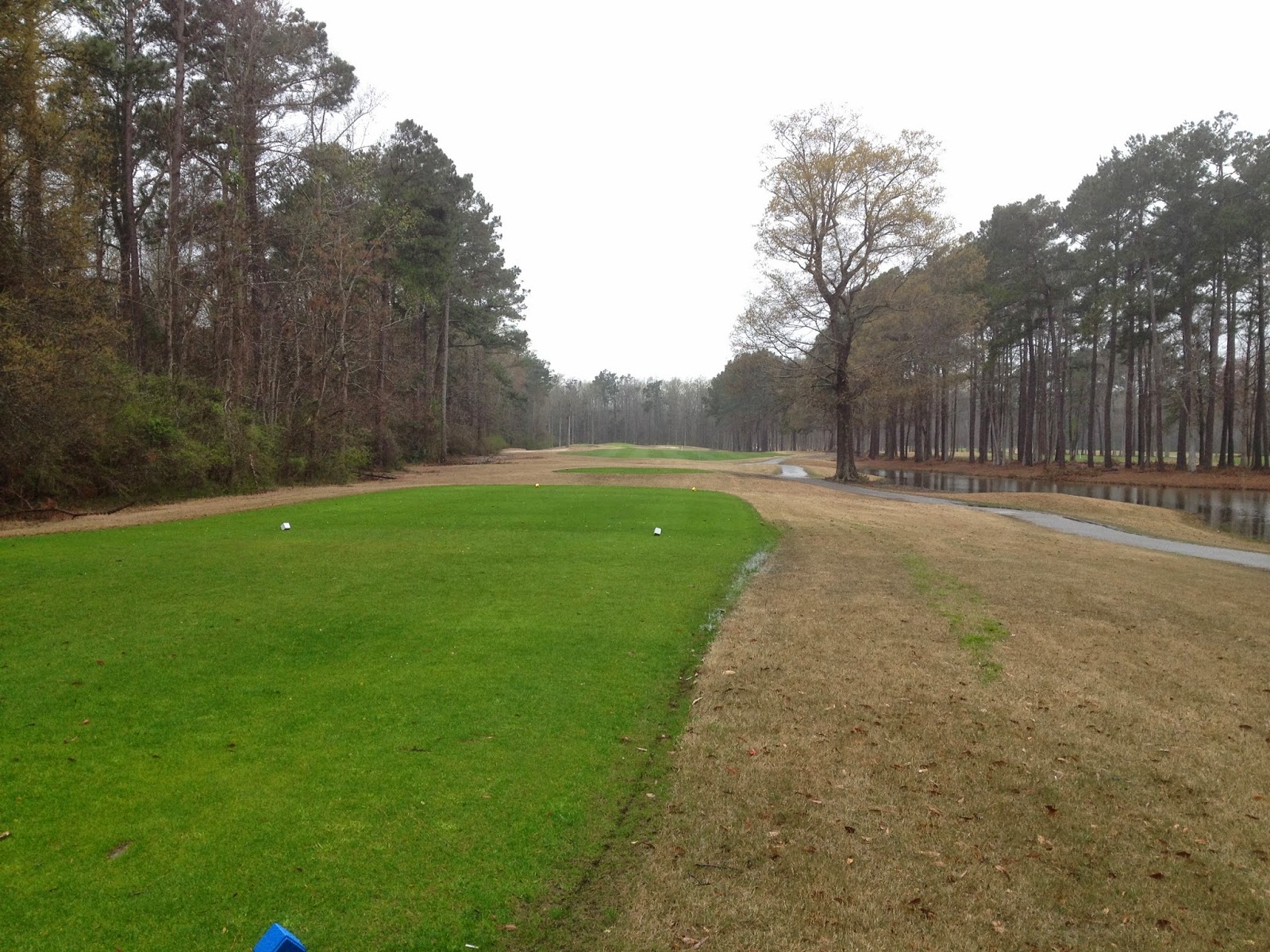 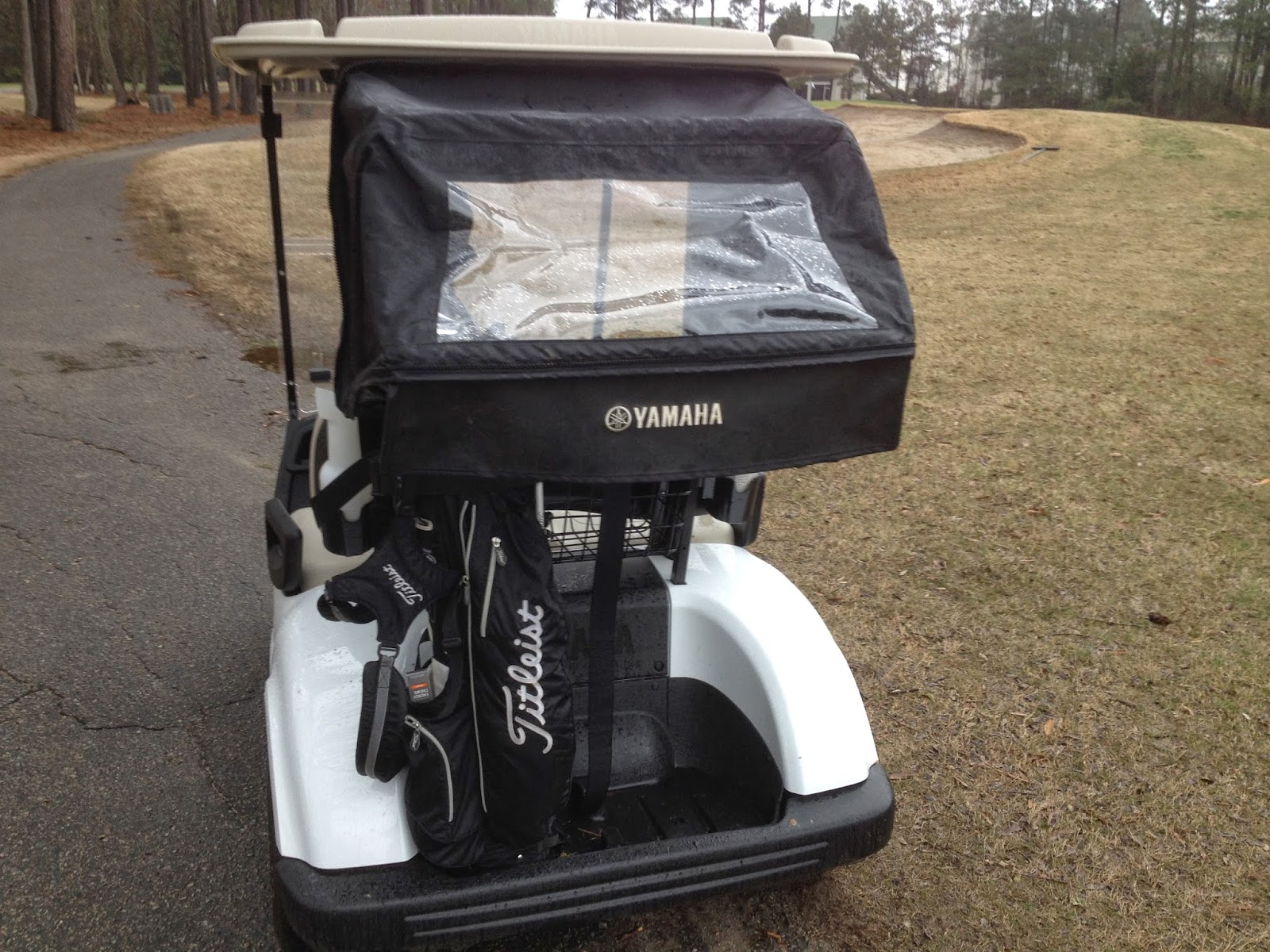 It rained throughout my front nine, which gave me a chance to utilize this fancy built-in rain hood--ooh la la. I'm getting a strange, unfamiliar, yet not entirely unpleasant feeling playing here. It's like I'm a valued customer or something. 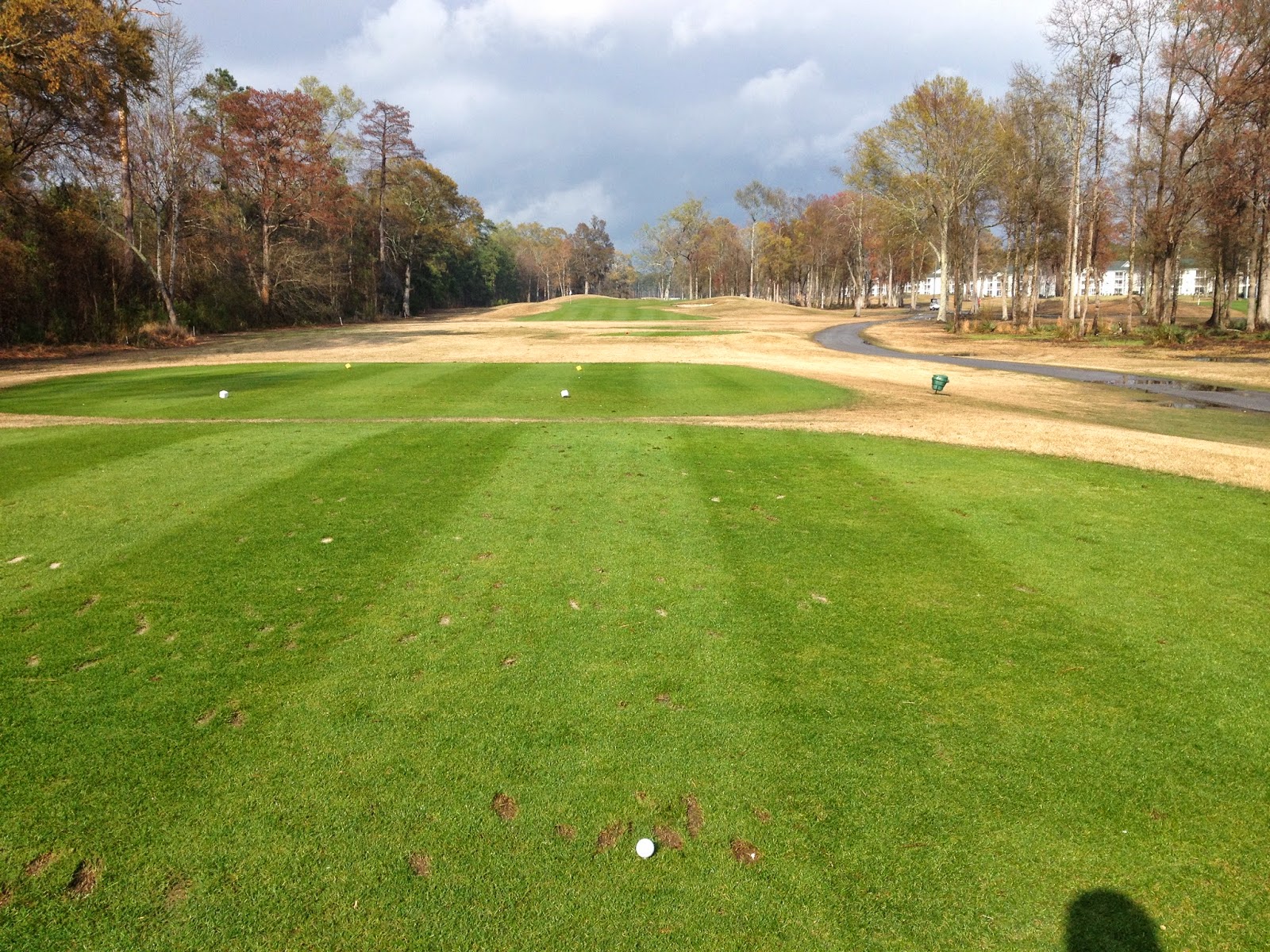 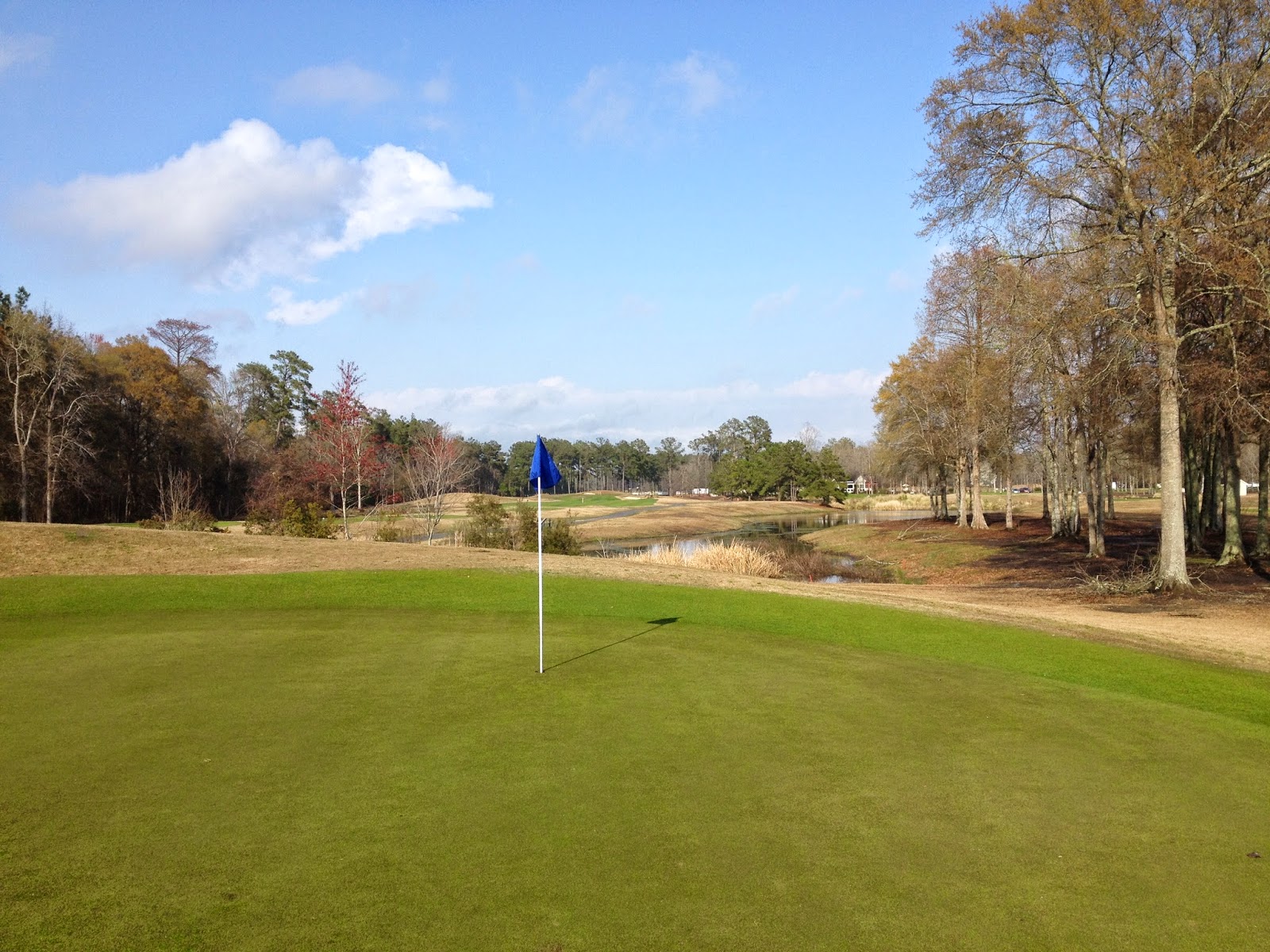 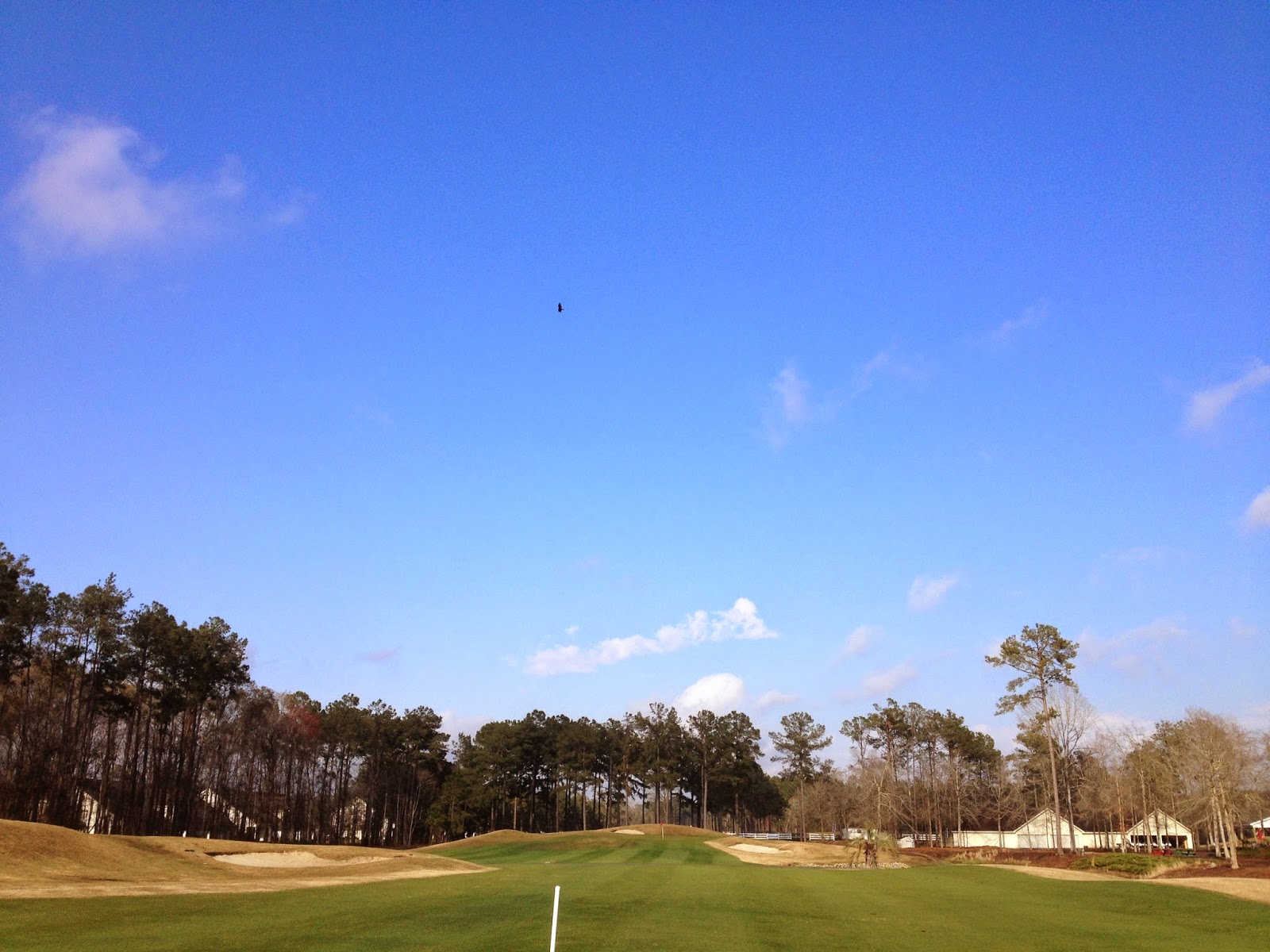 It was pretty dark out at the start, and I was a little concerned about the front nine drizzle escalating into heavy rain but alas, on the second nine clouds parted and I was treated to some picturesque sunlight to finish the round. 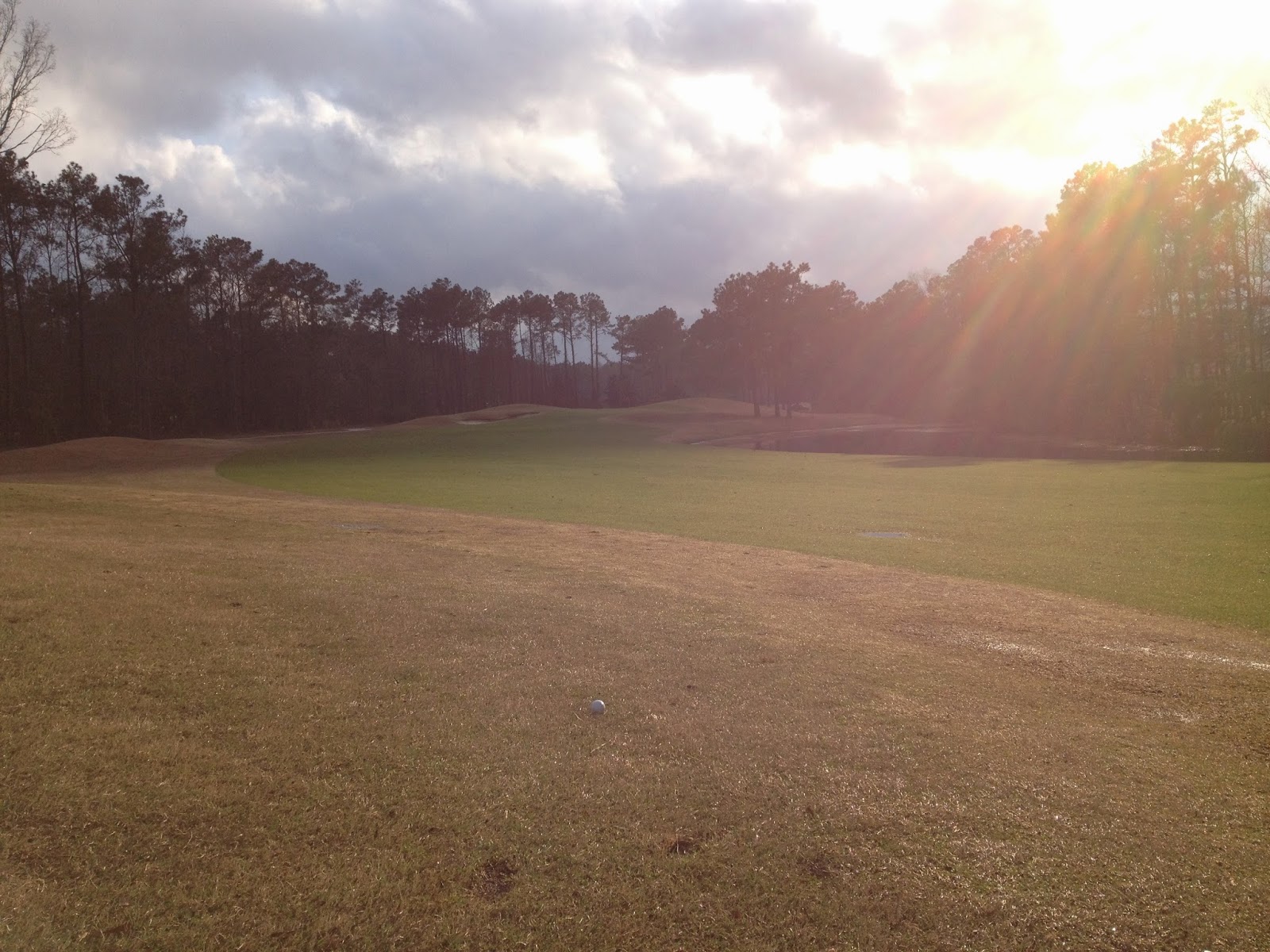 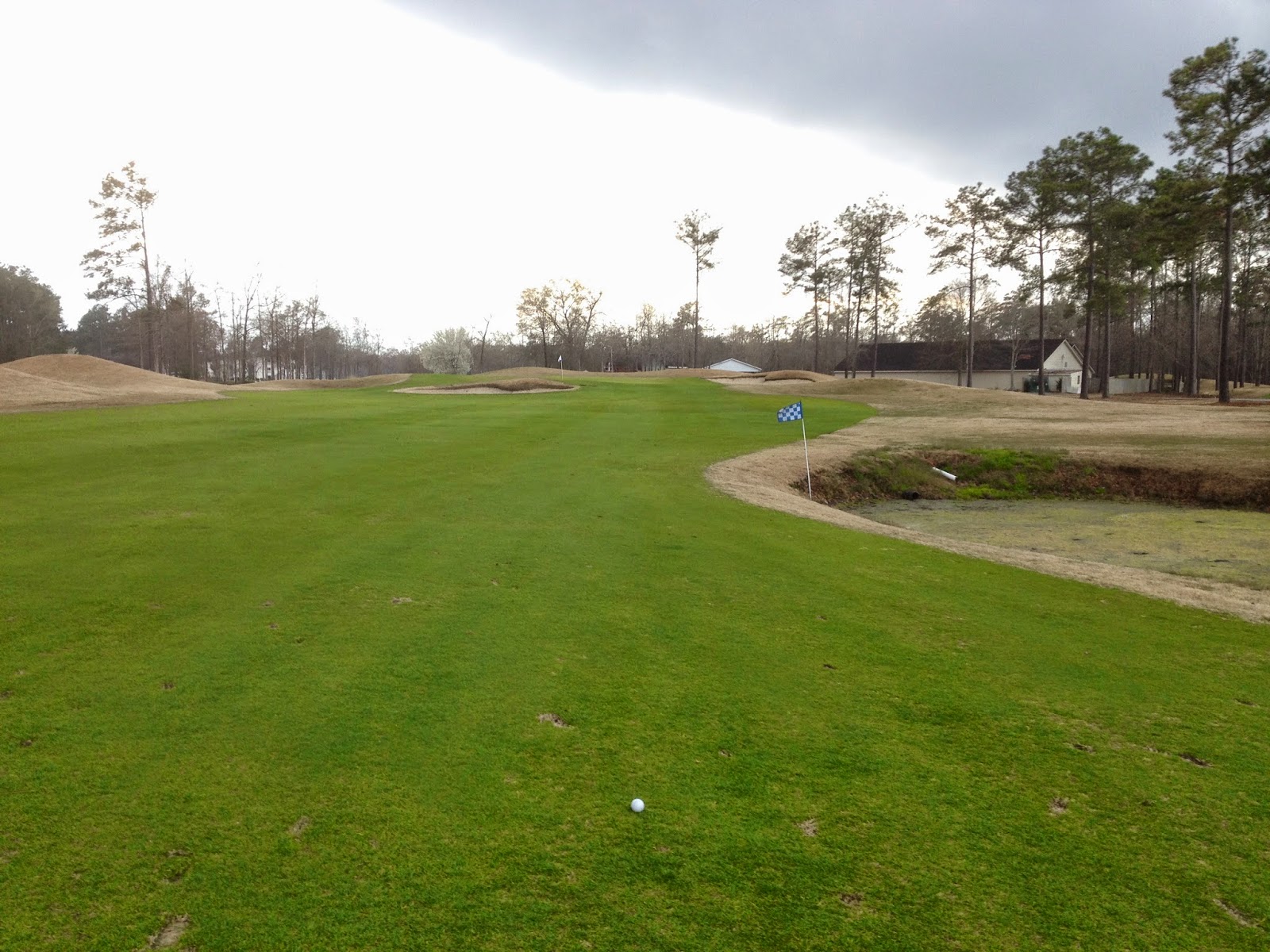 I shot 98 with several balls lost or in hazards. Also I putted pretty awful, and for the last few rounds for that matter. So, after finishing up on 18 I spent some time on the practice green. Standing close to the ball is something I started working on with the full swing. Then I started doing it for chips, and just now I've finally figured out to apply it to putting. It's a whole thing. Maybe I'll have more to say on it in a little bit.

Well, there you have it. Two Carolinas, two rounds of golf. It was fun. Scores might have been severely bloated, but there was plenty of memorable (and meaningful) play sprinkled in there. I feel like a slightly more complete American now that I've visited two more states in this great union. And on top of all that, the dog didn't once barf in the car. Bonus!
Posted by Legitimate Golf at 8:03 PM