Roadgolf: the Carolinas, Part One

It's roadtrip time for Ms. Legit and me. We packed up the dog in a rented SUV and headed about as far south as we reasonably could in one day. Even though the Carolinas are known for golf, I treated it as an afterthought and just sort of threw my dirty clubs in the back and aside from making sure to pack sufficient balls and a glove, I made no other plans or preparation. I didn't even pack the right gear for playing in the cold. I figured if an opportunity came up, great; if not, no big deal, it'll be nice enough just to take in the sights and to get away from goddamned New York City. 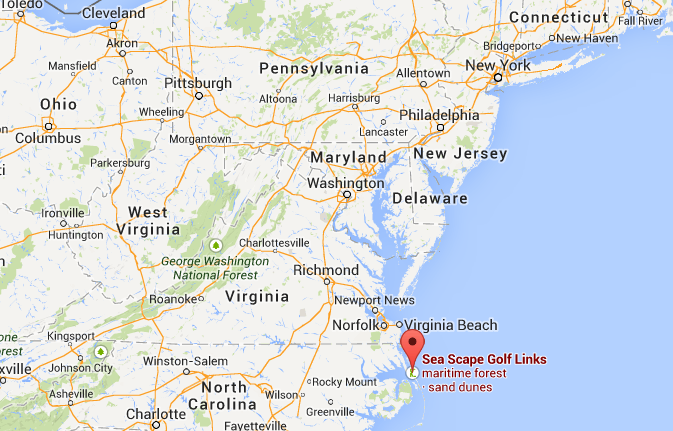 First stop was the Outer Banks of North Carolina, by way of a scenic drive through a colorful patchwork of (mostly) charming little beachy communities. Since it's still the offseason, not to mention unseasonably cold, the whole area was mostly quiet and empty. 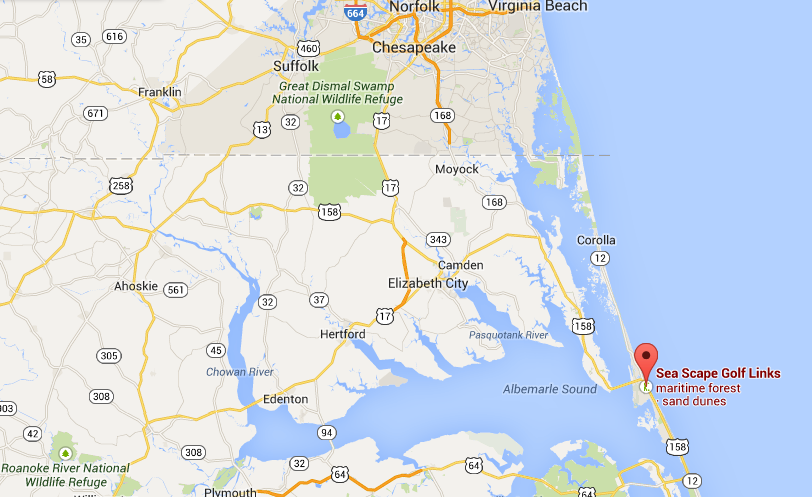 I hadn't done any pre-research into golf courses or what not, but once we got there I happened to catch a glimpse from the highway at one of the local links courses, the sight of which made me go Whoa! So I whipped out the old online tee-time app and happened to find a nice deal at "Sea Scape Golf Links" in Kitty Hawk.

The Wright Brothers specifically picked out this area to do flight experiments because of the high, persistent winds. Not that I knew about any of that prior to the round. That makes this officially an insane place to play golf. I did find out beforehand that Sea Scape was designed by Art Wall, the 1959 Masters champion and winner of quite a few PGA Tour titles--a bit of cred like that always adds some extra anticipation to a round. 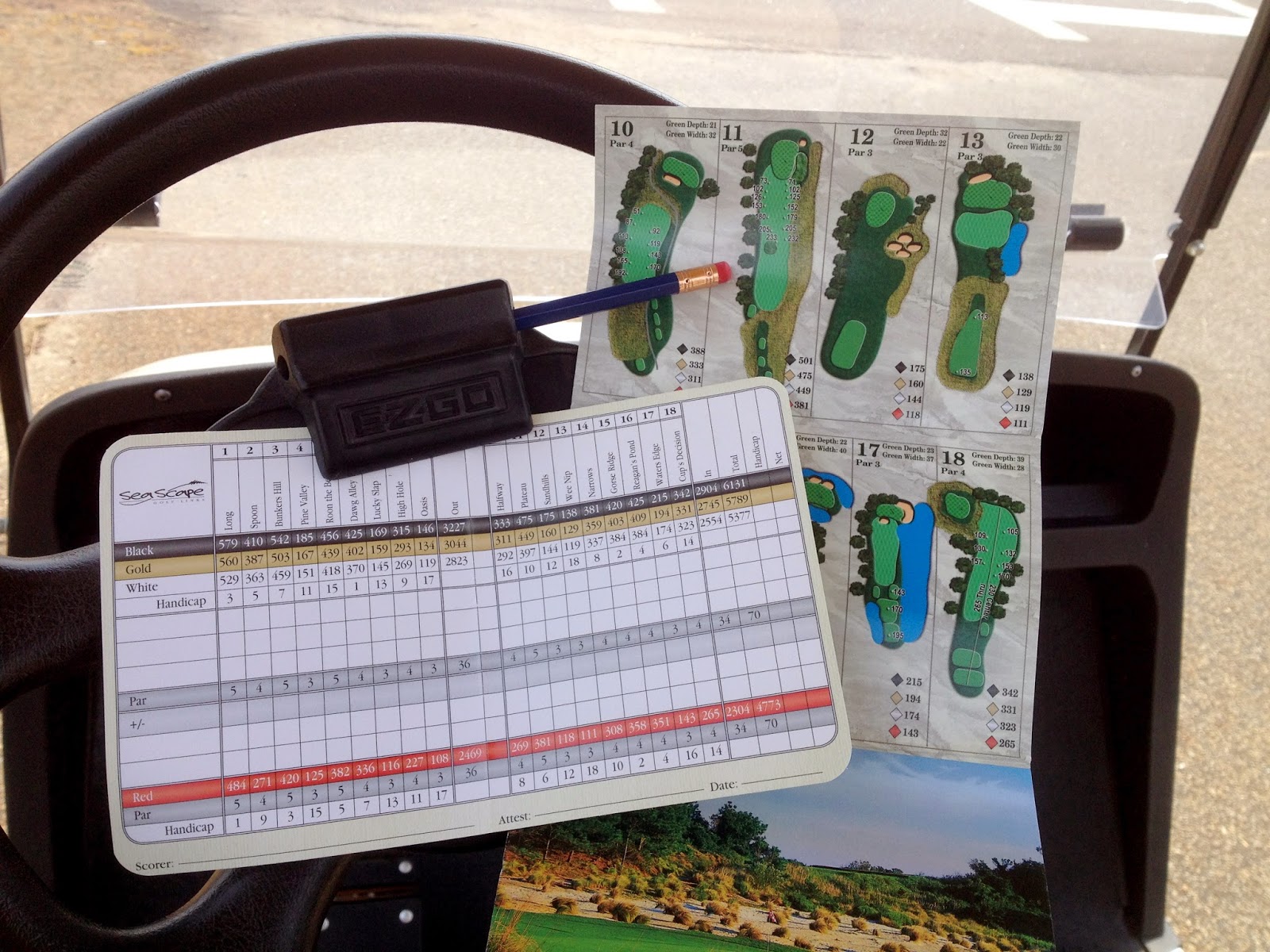 I love this kind of attention to detail, it's usually a good sign. 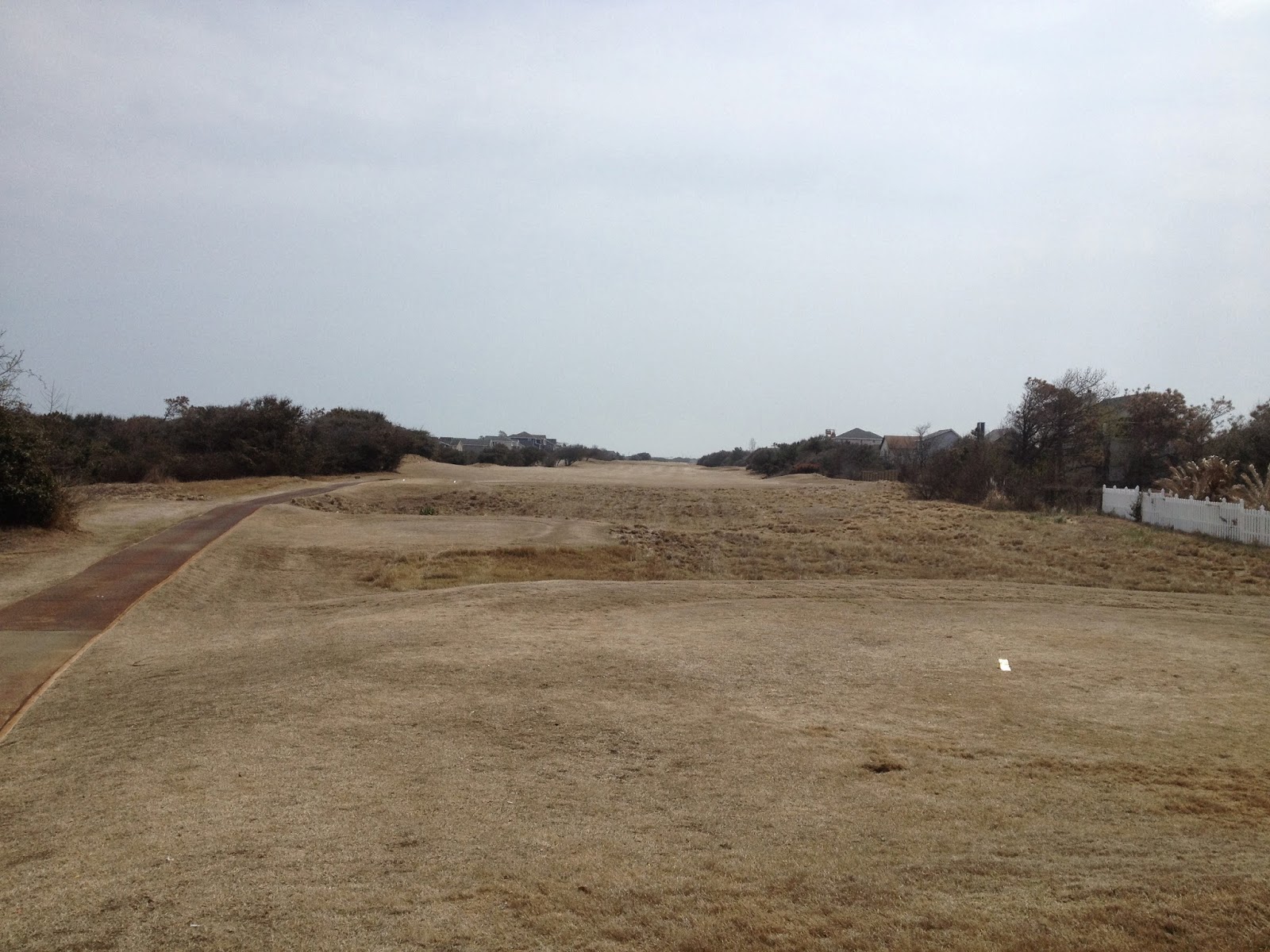 This was one of the craziest first tee shots ever. I looked out at an alien landscape, and frankly got more than a little intimidated at the sight of this slivery 579-yard par 5 hemmed in by nasty shrubs, while an insistent right to left helping wind pushed at my rear. Still it was an inspiring view, like nothing I've ever seen. I piped a nervous 5-wood down the fairway and gave thanks to the golf gods for the glorious variety of golfable terrain on this brown and green Earth. 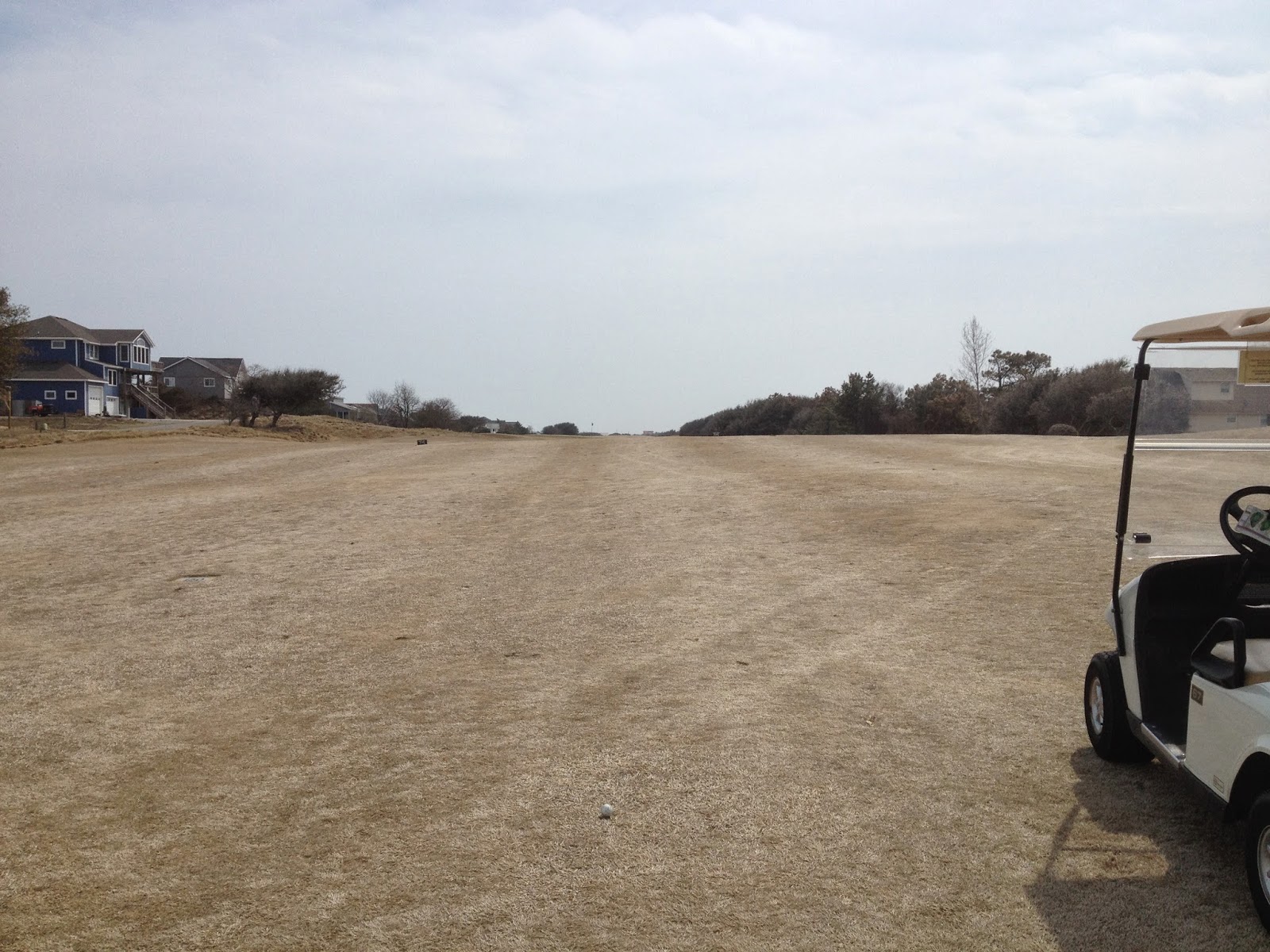 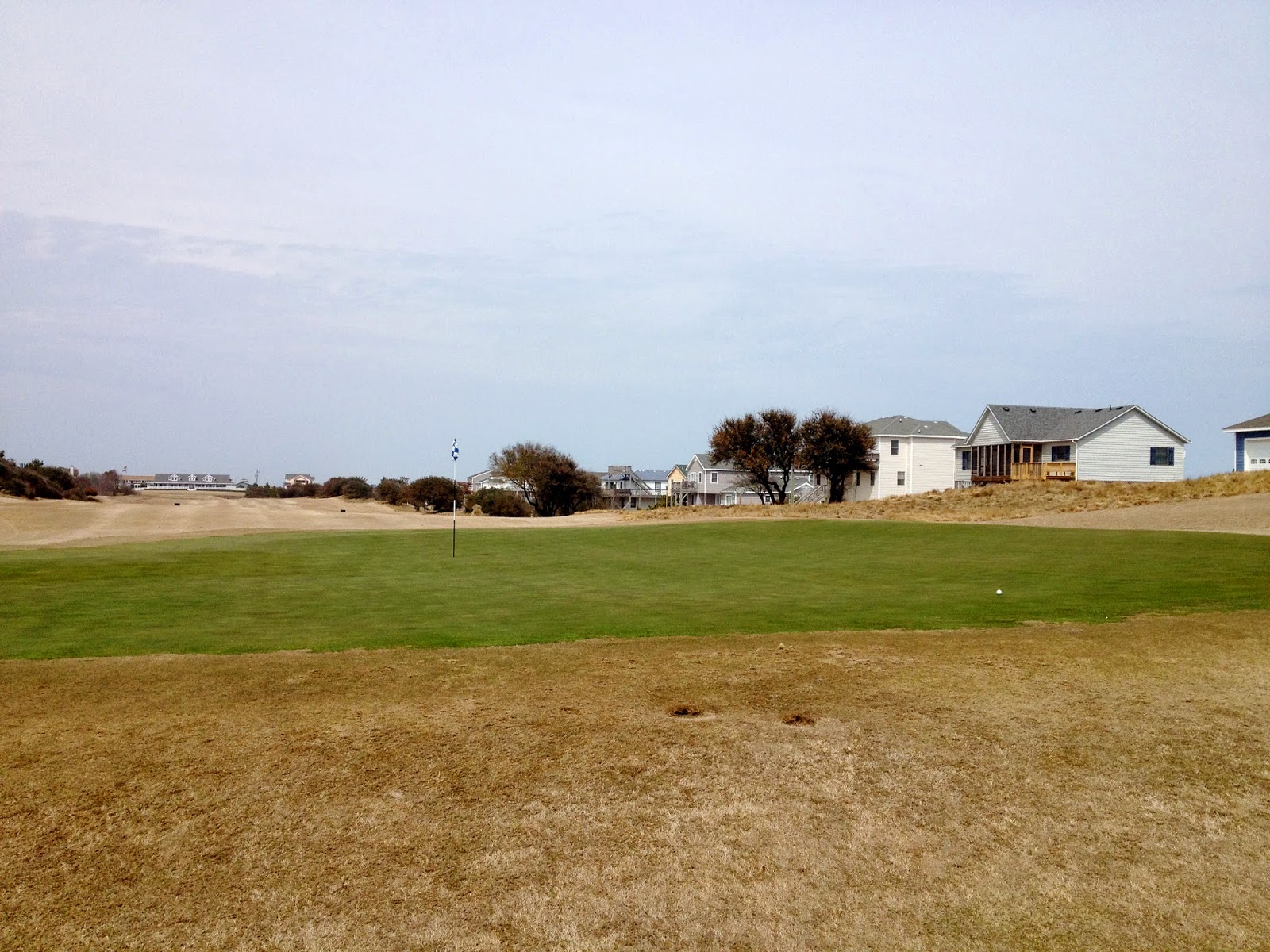 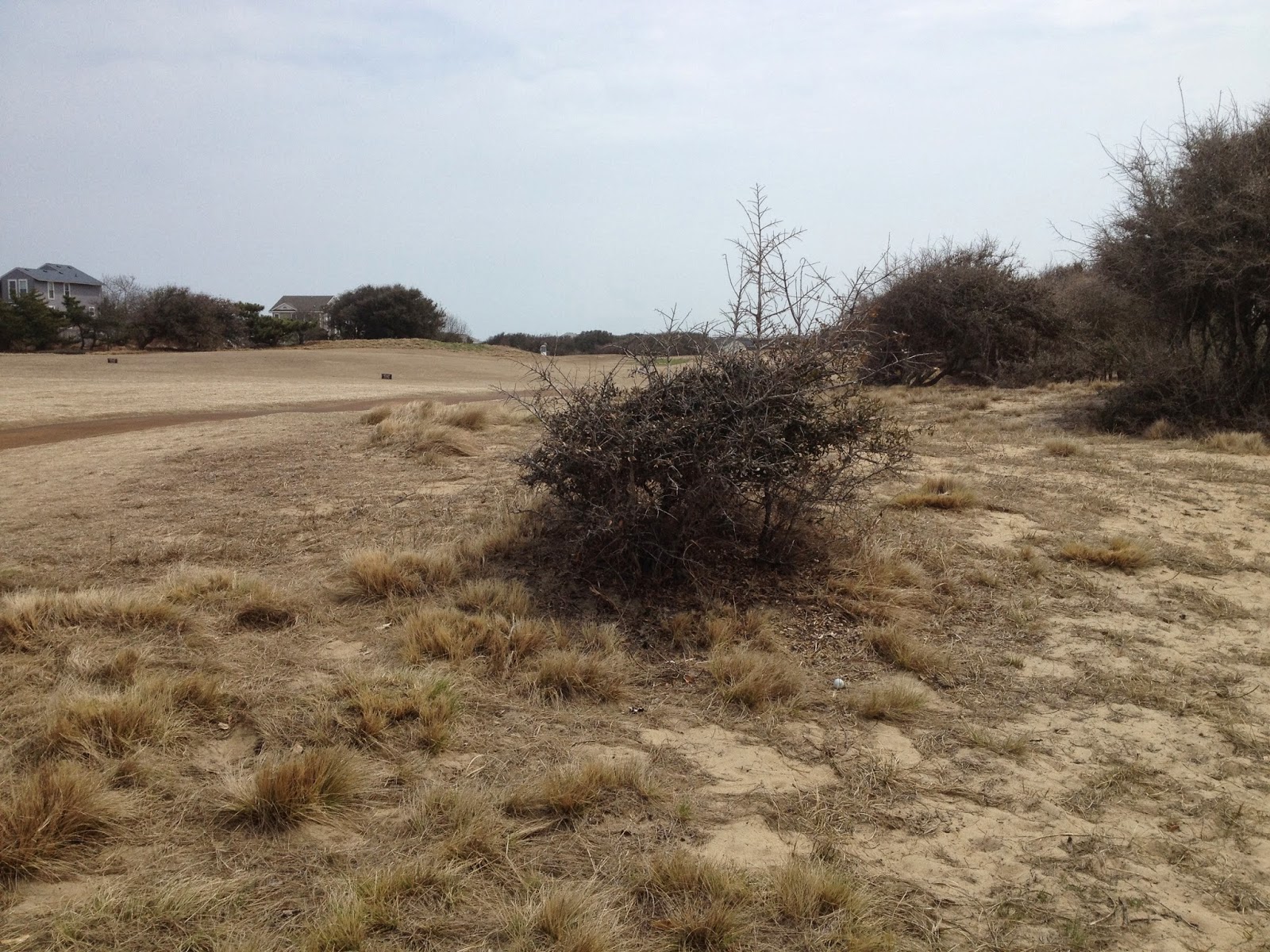 Even though I had no shot to the green, this could've been a lot worse. 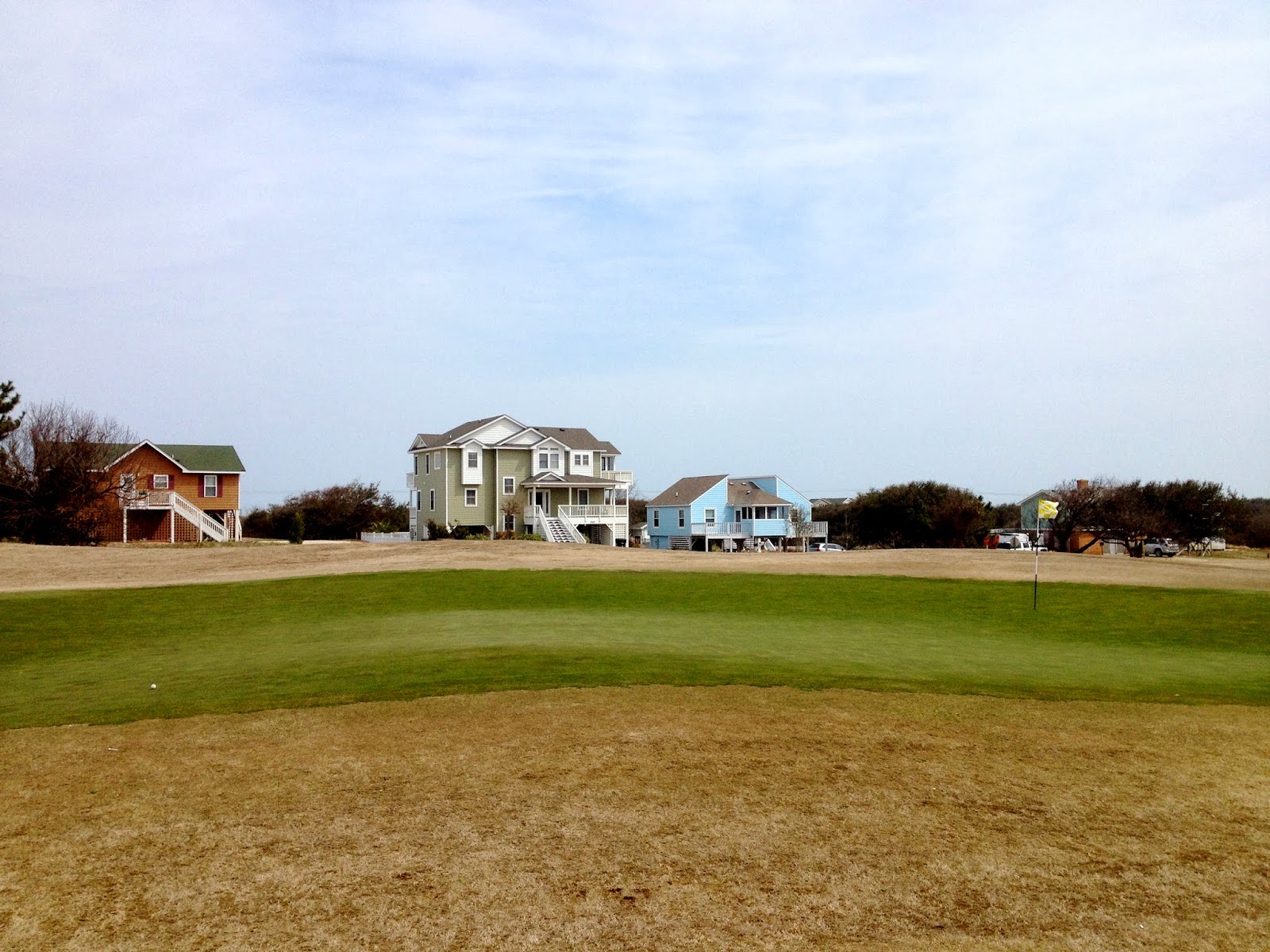 The greens are the only green things on this whole course. 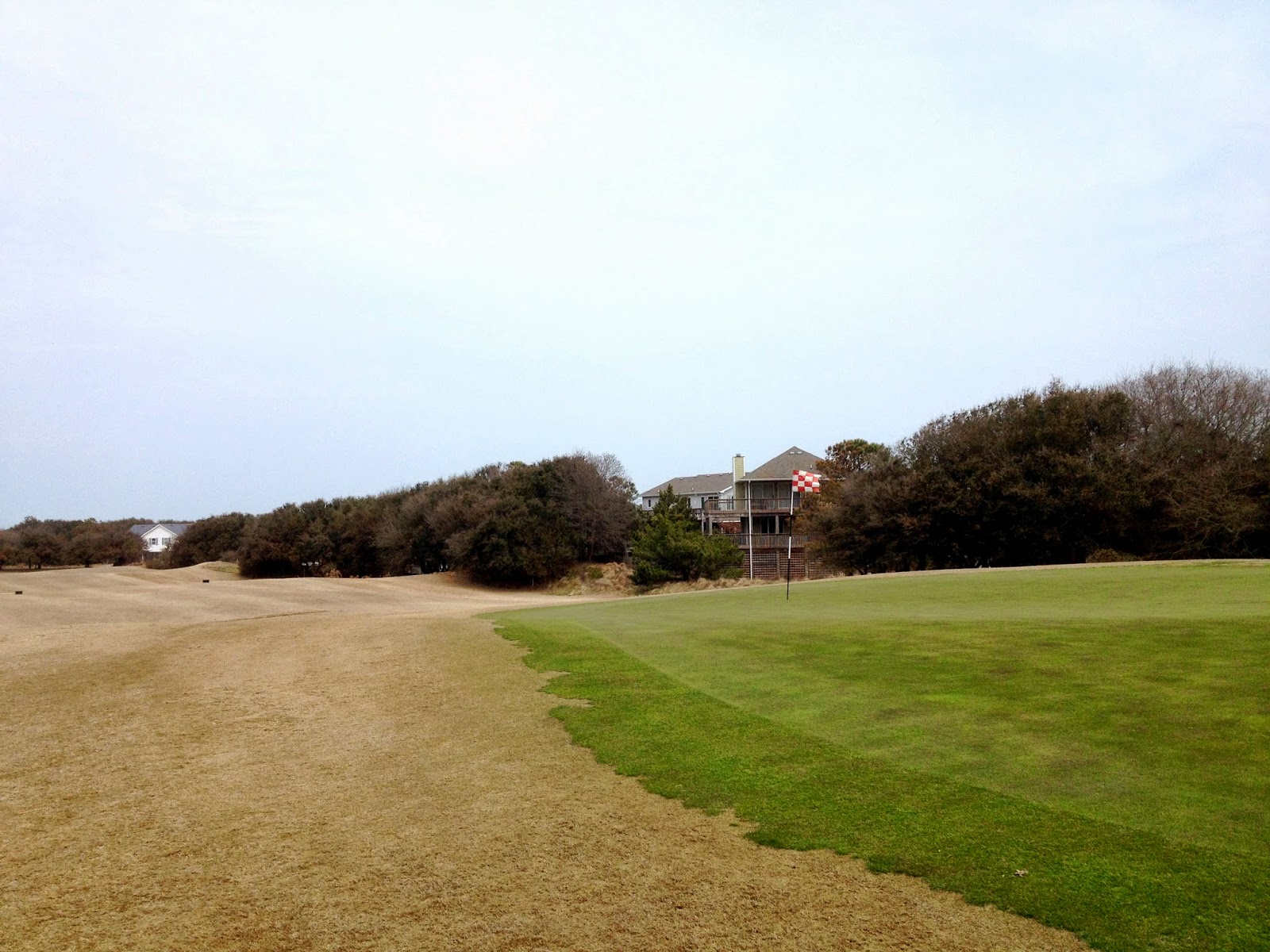 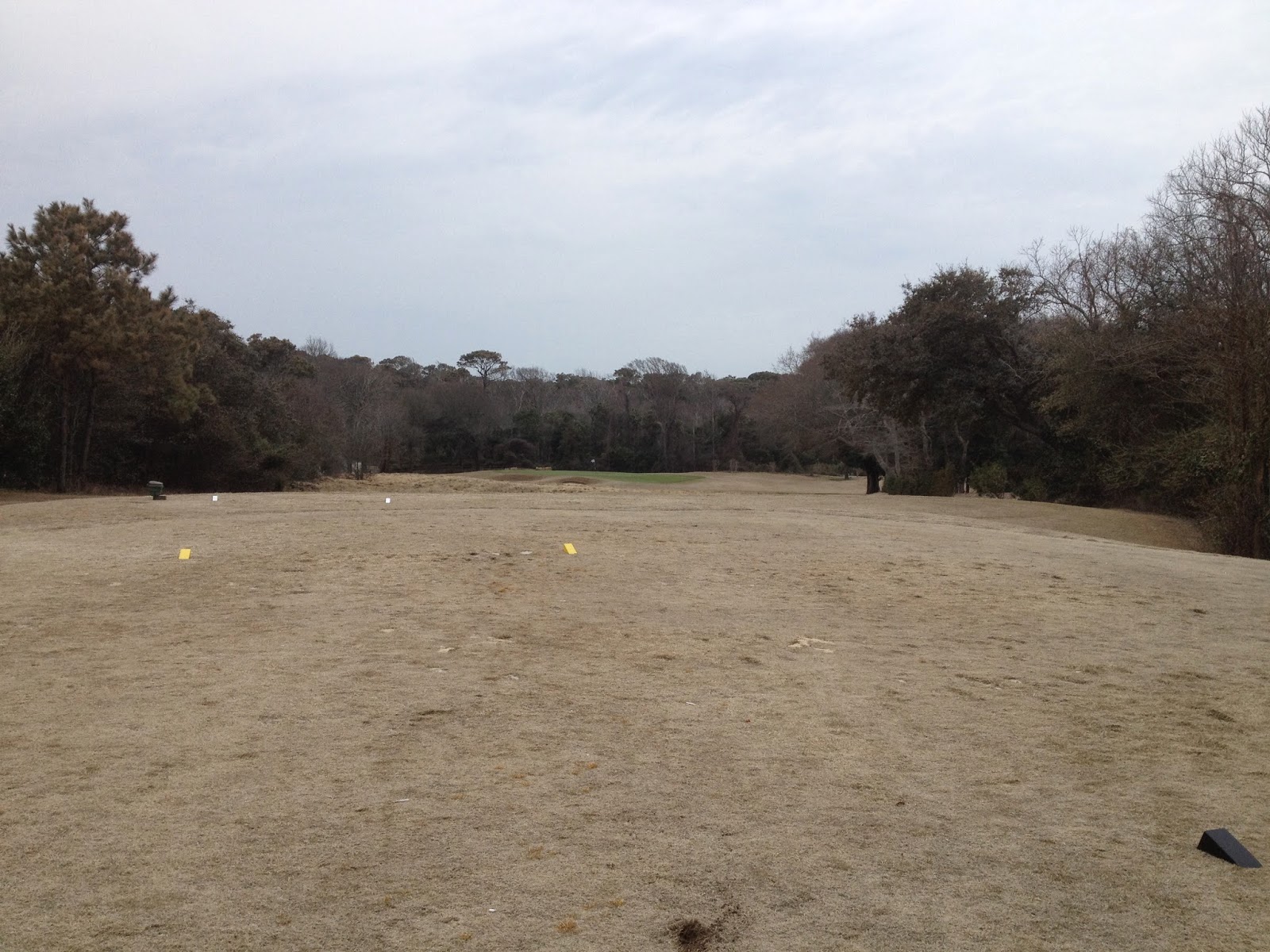 I've never seen dormant grass like this. Once you get past the color, it's actually a really nice surface on which to play golf. 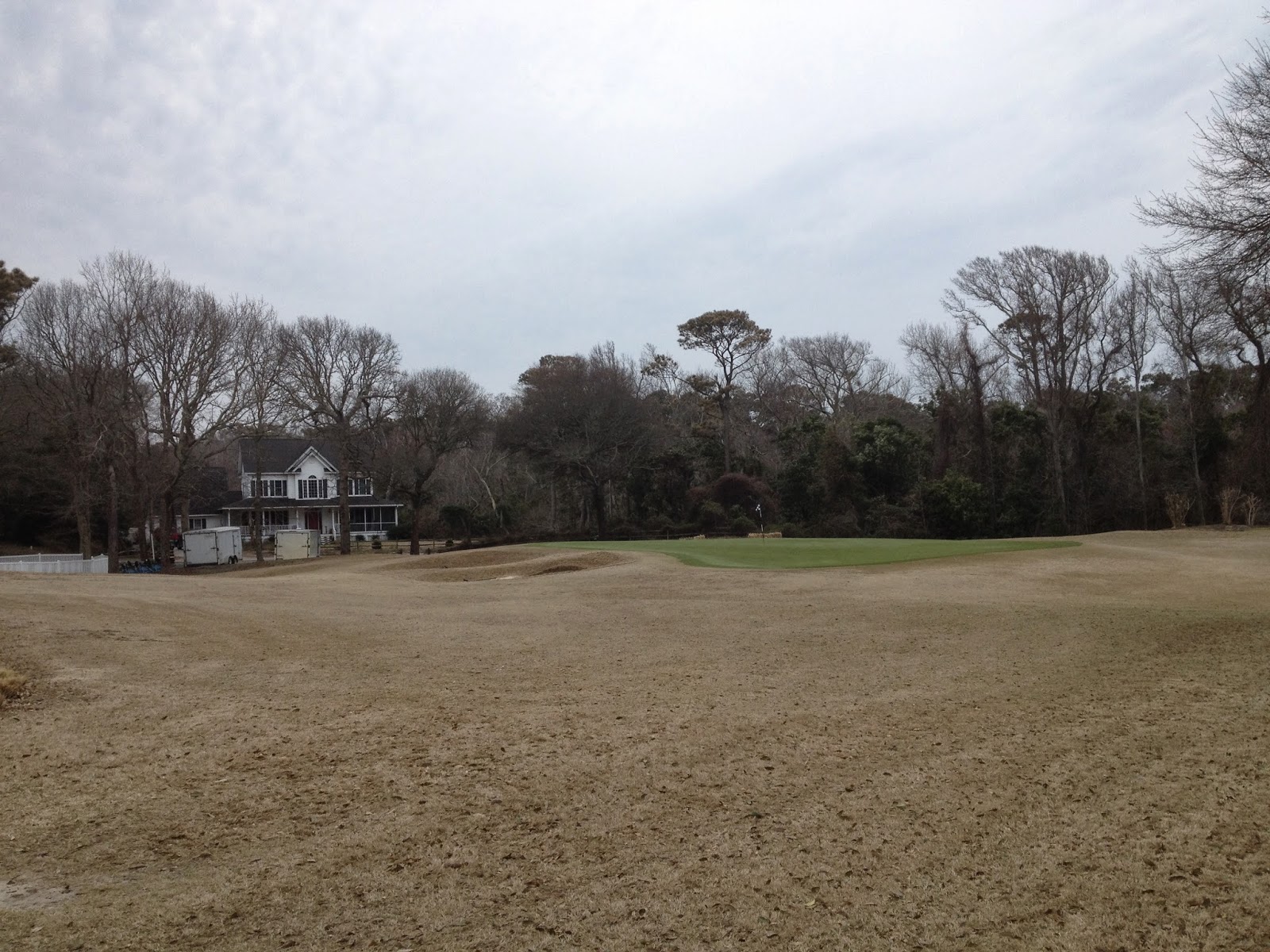 Most of the greens are unguarded from the front to allow for low run-up shots. I didn't try that approach today, attempting instead to flight everything in the air, which got me into some trouble. 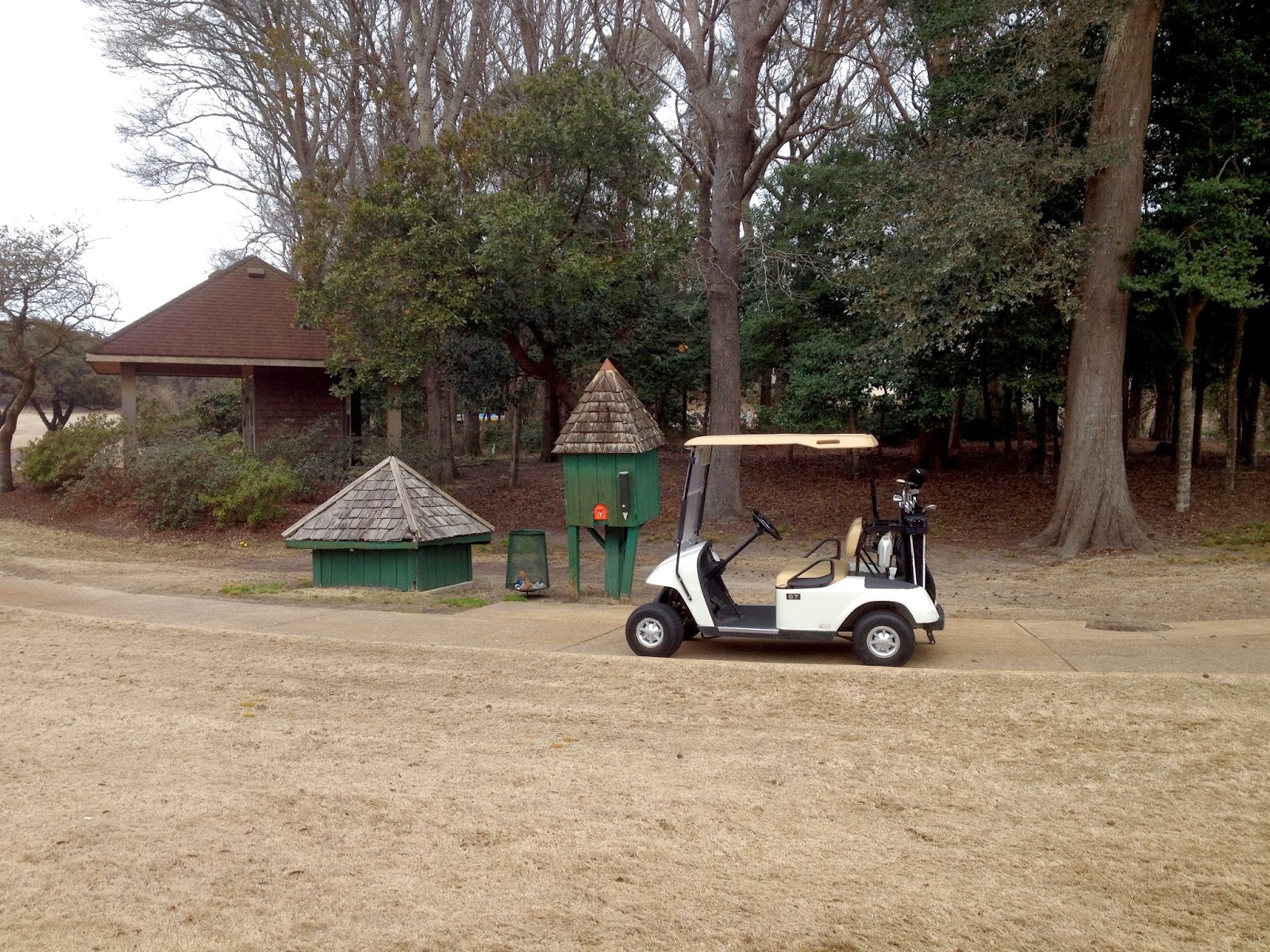 They do a great job with the basic amenities here. 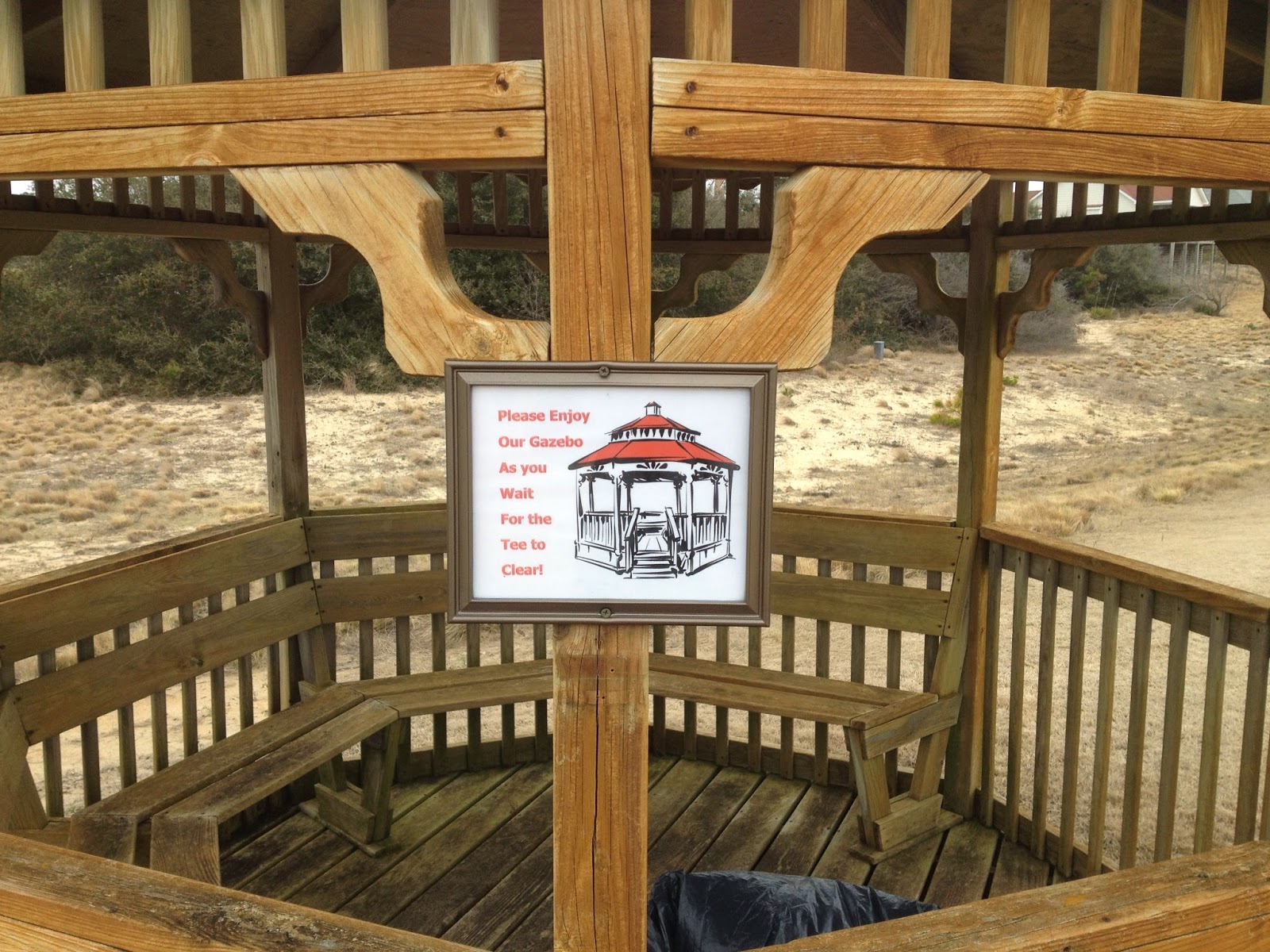 As an NYC muni golfer, I've never been invited to enjoy jack squat. 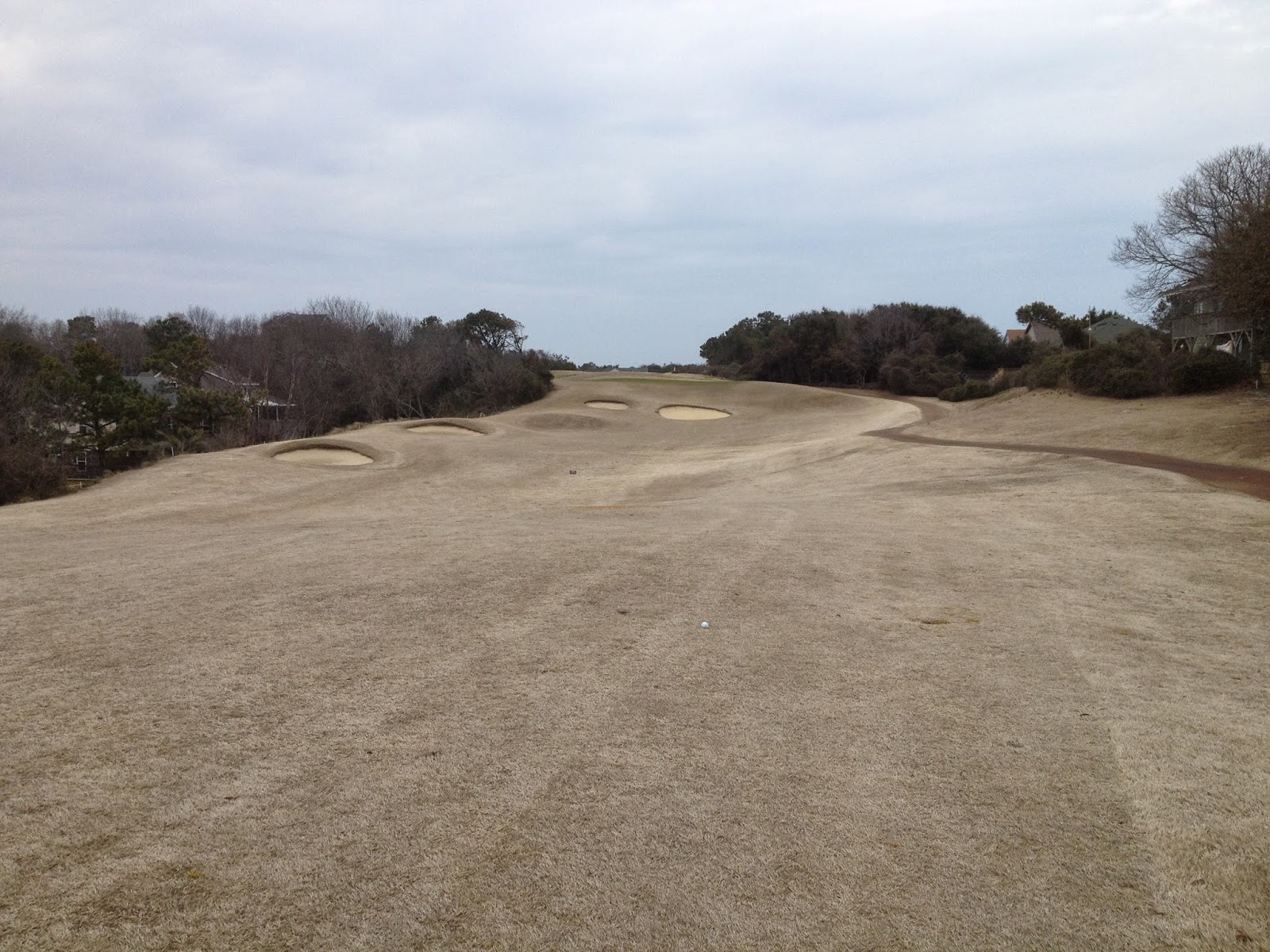 Dramatic looking approach to the 8th; trouble everywhere. I tried to fly a 5-iron in there and hooked it straight into the junk. Looking back, a cool shot would've been a low screamer that started well right of the bunkers and rode the banked left turn into the green. 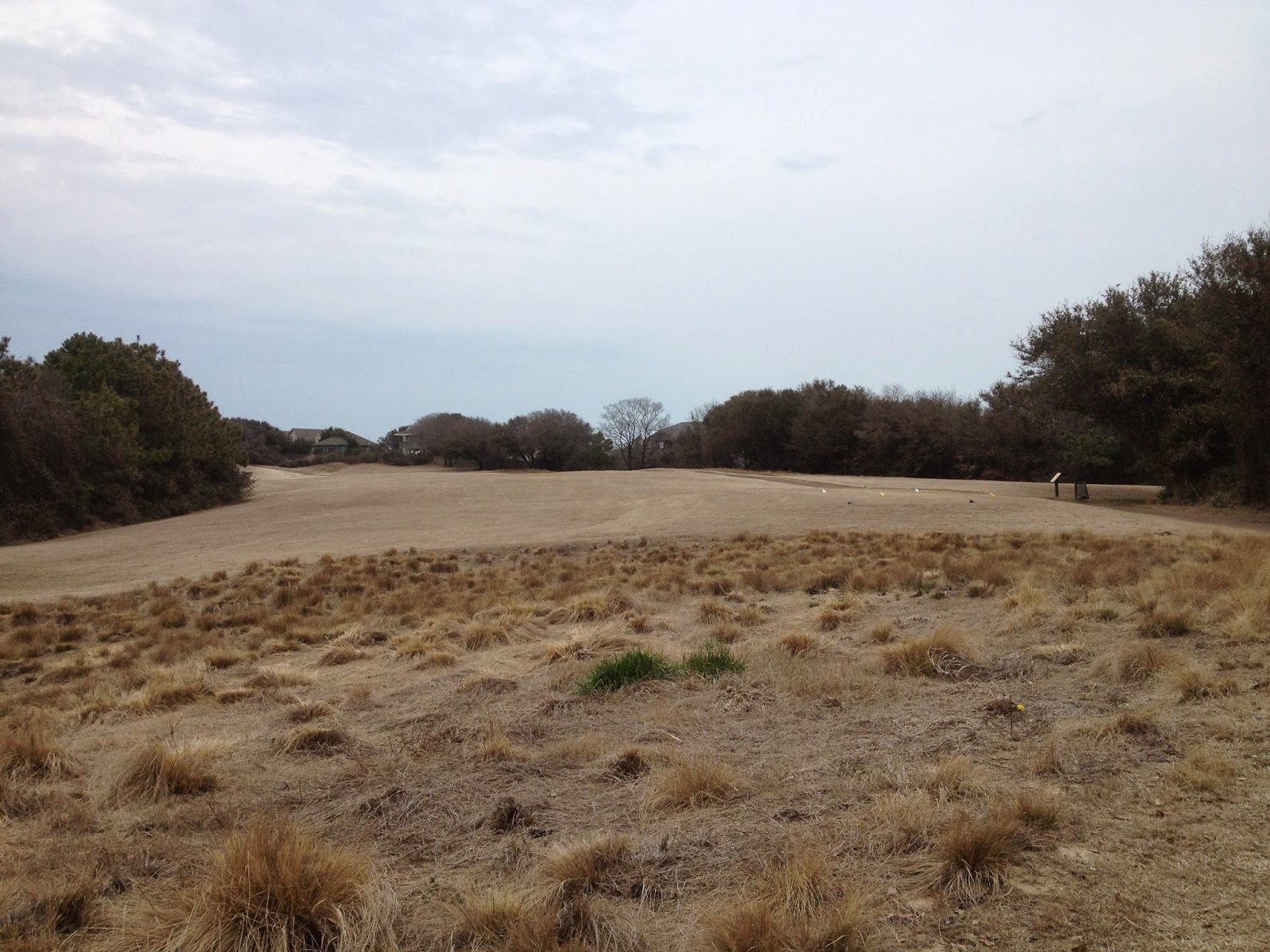 True to links form, the course was carved out of the natural maritime environment, with minimal artifice. 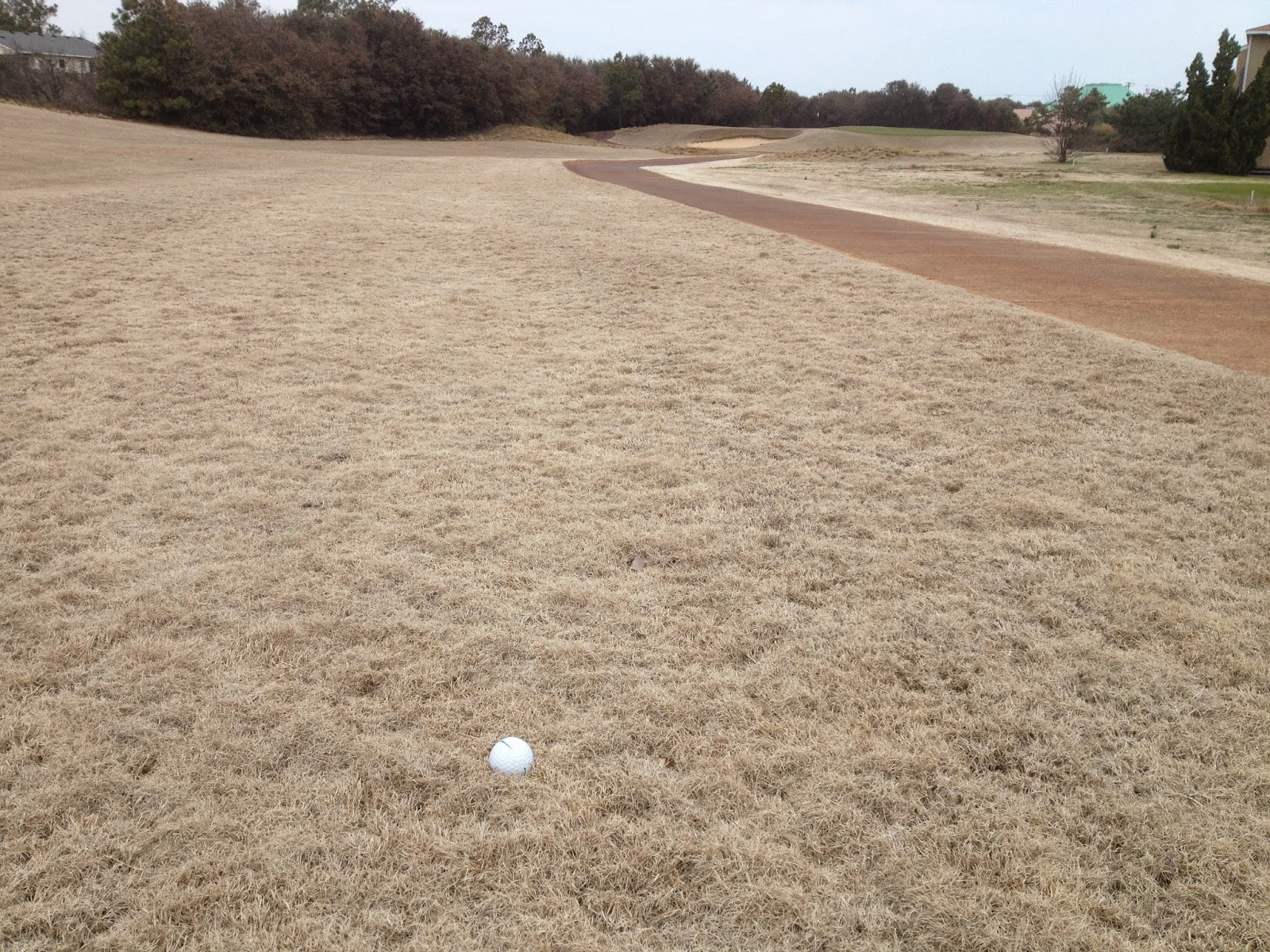 Not sure what this kind of grass this is, but the rough is bountiful, even in its dormant state. Check out the rust-colored cart paths, what a trip. 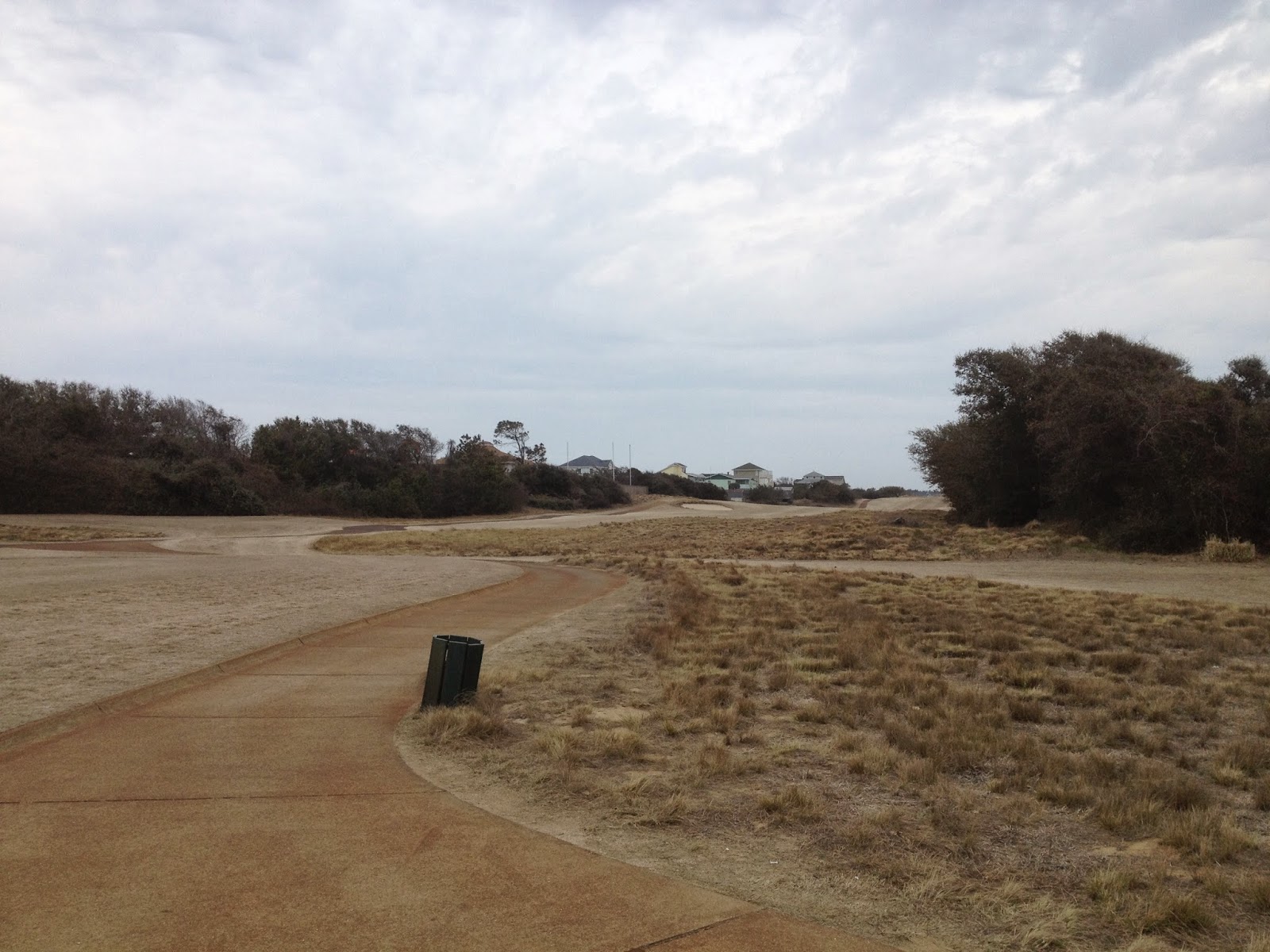 The tee shot at the par 5 11th. It's a straight hole but the tee shot is a visual nightmare, with trouble short, left and right. It looks like there's nowhere to hit to, and with that thought in mind I went ahead and sent my first tee shot straight into the junk on the left. 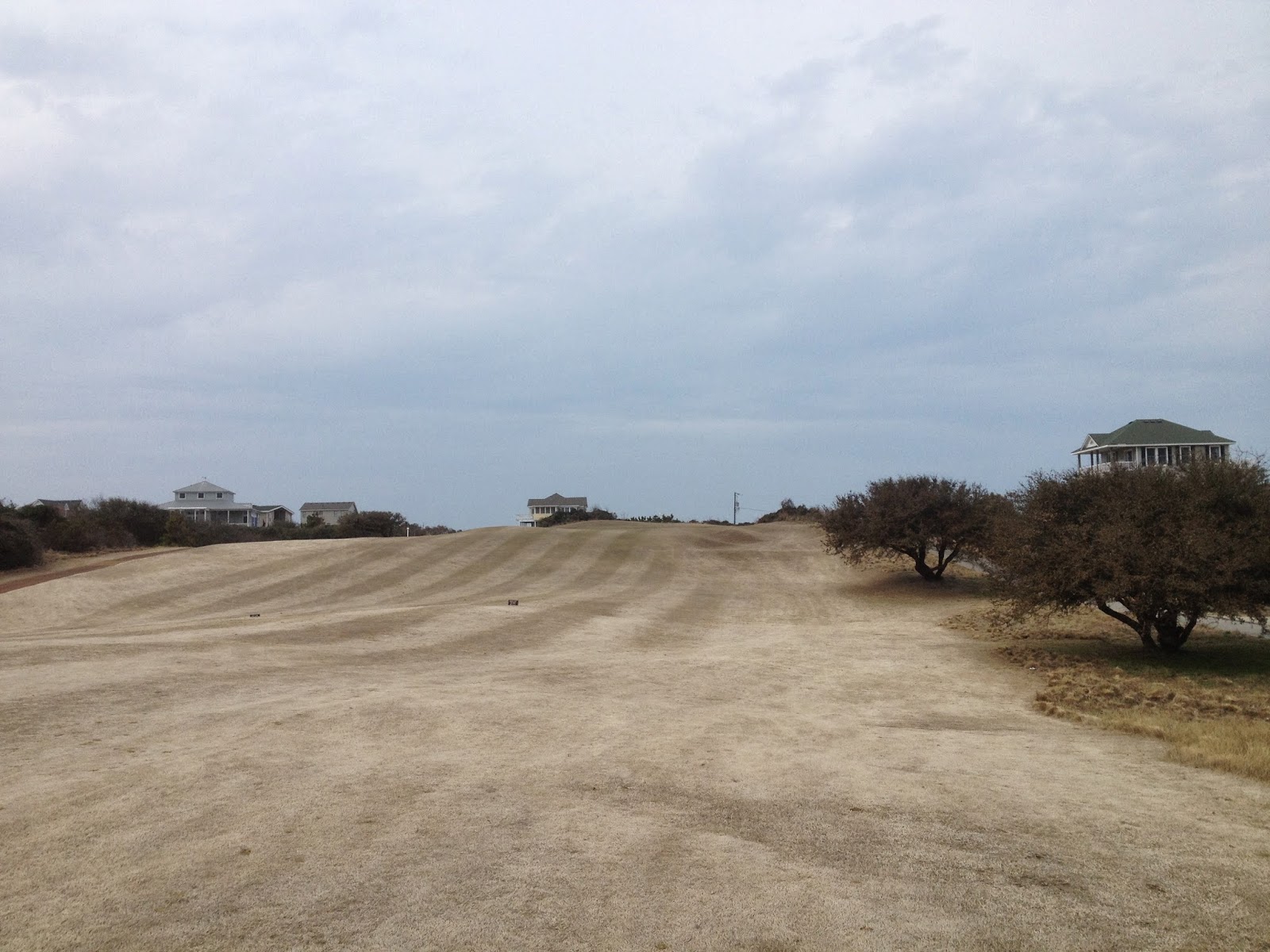 The massive uphill approach on the same hole. I lost a tee-ball, then yanked a layup attempt into the shit and ended up taking a 10. 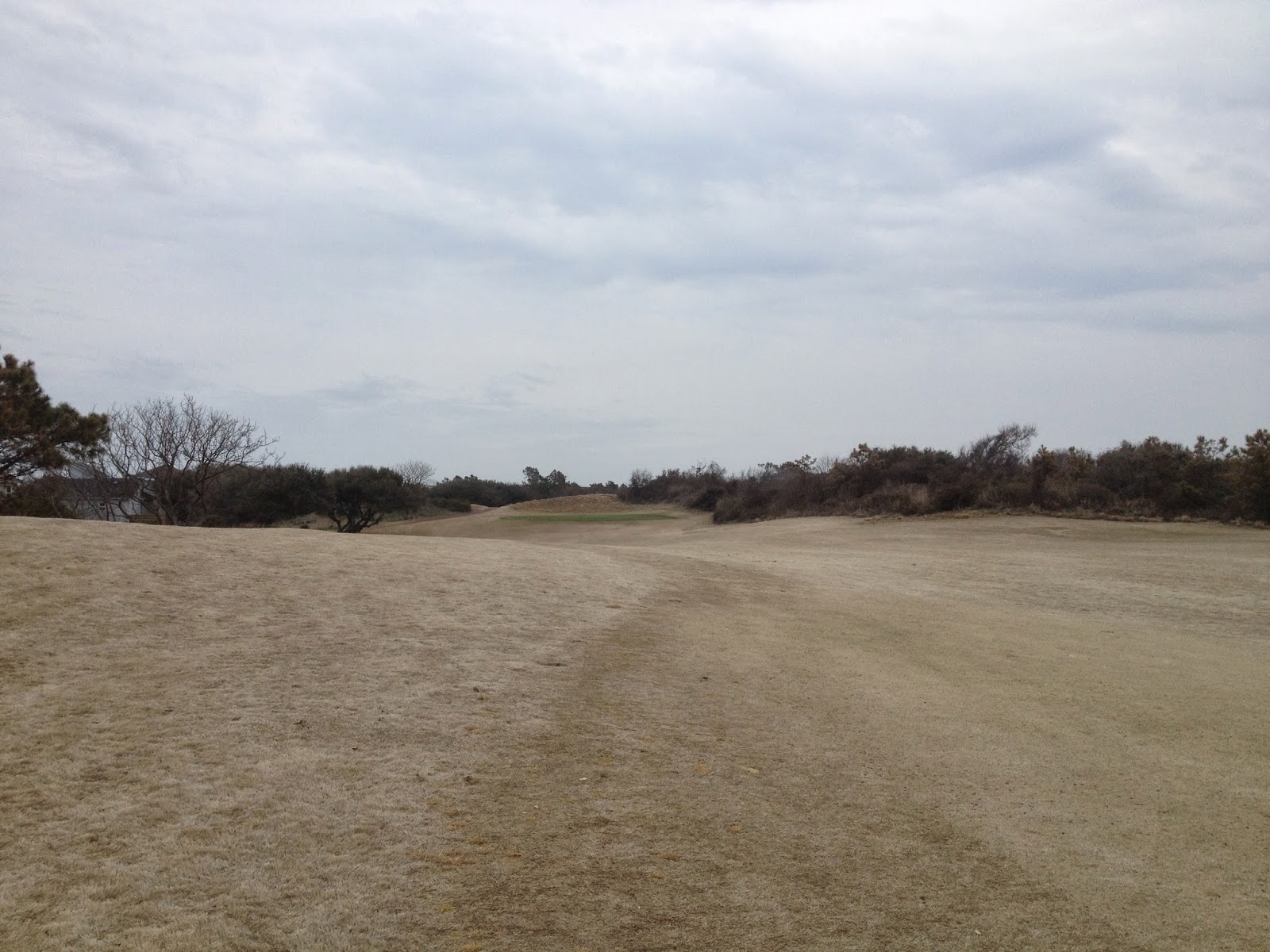 The approach to #15, where I hit a stupendous shot about 178 yards downwind to pin high, a triumph of planning and execution. 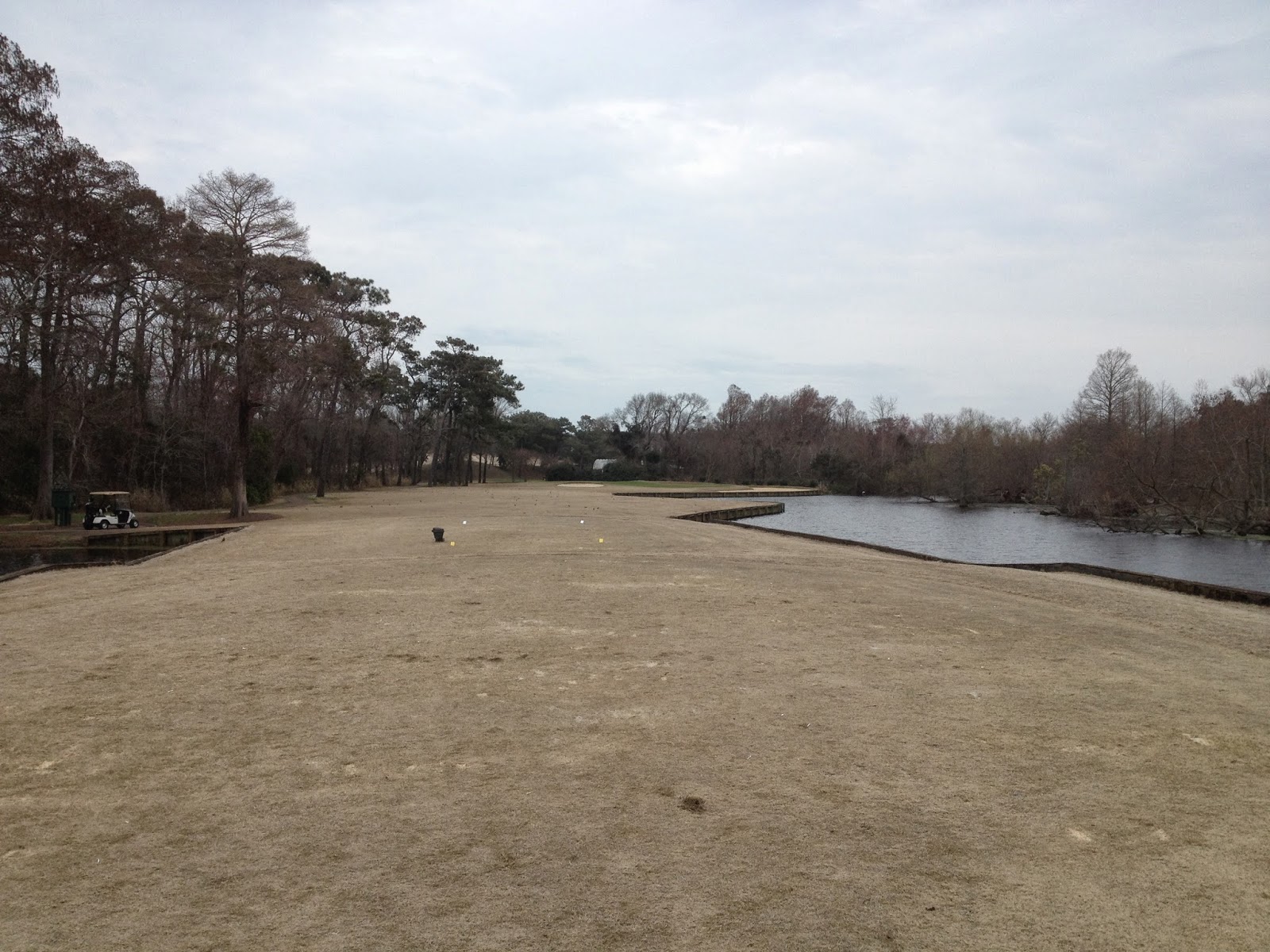 The 215 yard, par 3 17th, probably the hardest par 3 I've ever faced. Amidst thrusting winds, I tried to bail out way left and still managed to fly it into the water. Then after dropping near the hazard about 70 yards away, I skulled it straight into the junk behind the green, attempted (and failed) to poke it out of the bush, took an unplayable, then several more shots and ended up with a most ignominious sextuple bogey 9. 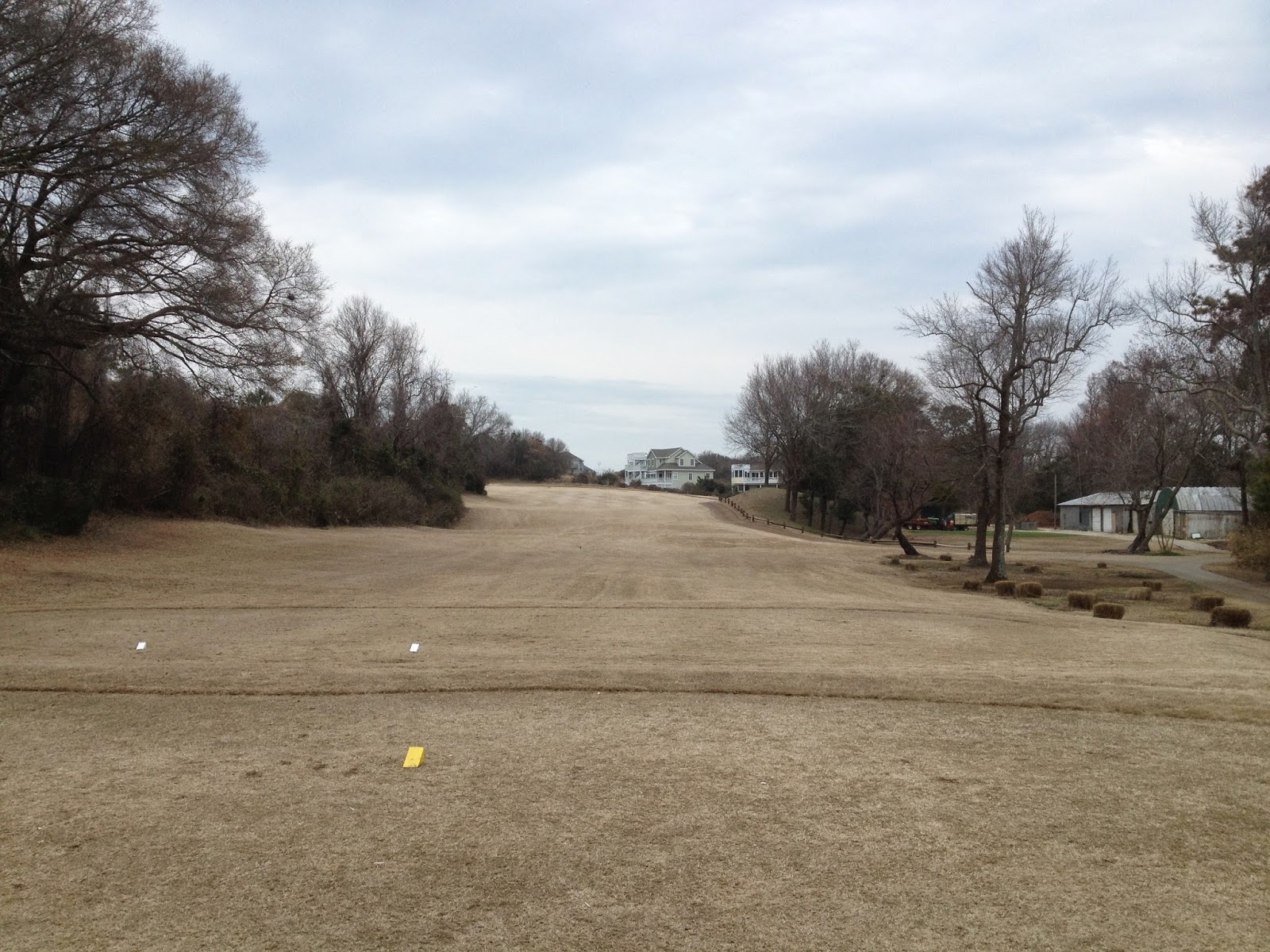 From the tee at #18, an L-shaped par 4. Made a good 3-wood swing here, a small atonement for the last hole. 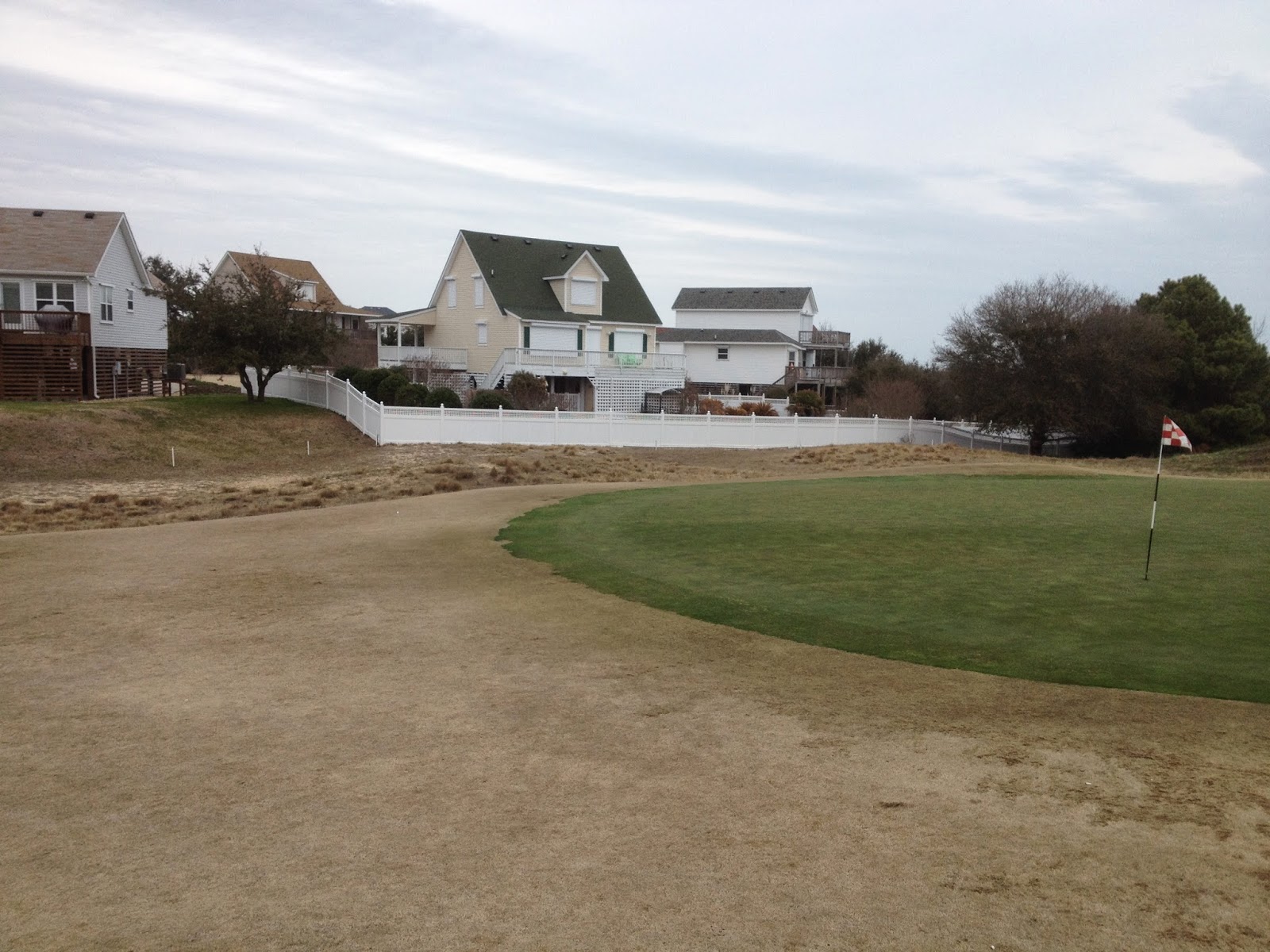 My approach to the blind green was well hit but about half a club short. But at last I'll try a bit of links-play and putt this from off the green. 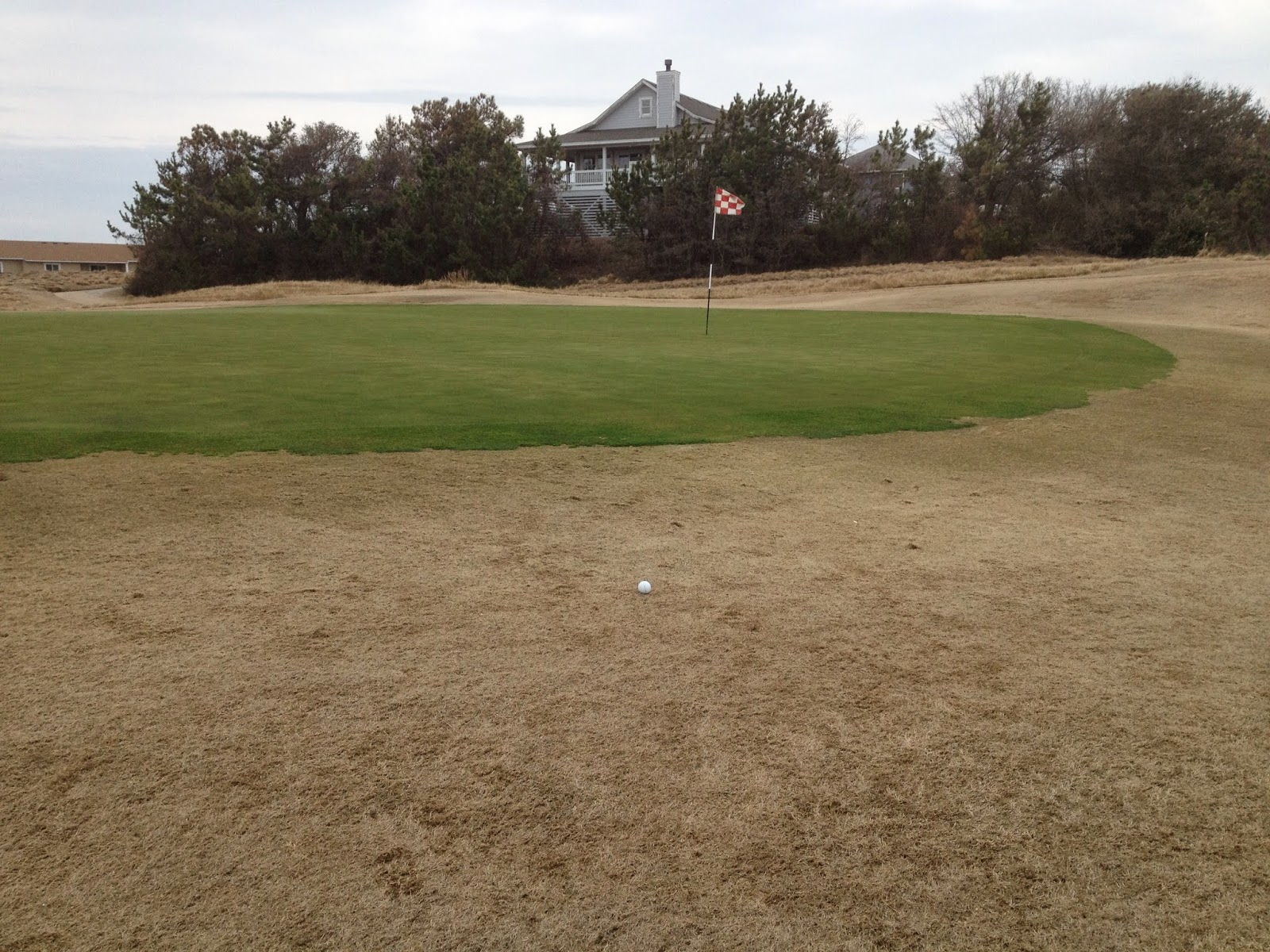 I mis-hit it with the putter, came up short and closed the round with a disappointing bogey. Oh well. Nice photo at least.

Statistically it was a disaster of a round, rife with all manner of bogeys (double, triple, quadruple, quintuple, sextuple), flubbed chips, inopportune (is there any other kind really?) three-putts, wanton penalty strokes. I played the back tees because 6,131 is supposed to be kind of short, right? Somehow though the short holes never really materialized--the persistent wind makes this a fairly long course.

Spiritually though it was a success. I had a blast. I can attribute the dismal score to many things but indifference is not one of them. This had to be the funnest time I've ever had shooting in the triple digits. Not only did I love the course, I got the whole damn thing to myself. On the third hole a disembodied stray ball flew into the fairway, presumably from an adjacent hole, and that ball was literally the only trace of human activity I encountered during the whole round. Not a single other person was seen on the entire course.

For me it always seems like the greatest swing breakthroughs happen on a course and not a practice range and that held true in this round. The numbers on the card all look horrible but screw it--there was a handful really good shots and they helped to solidify some swing thoughts (the 7-iron into 15 especially was a bit of a paradigm-shifter). I would've loved to play here again equipped with a bit of local knowledge, but the plan called for us to pack up and head further south...
Posted by Legitimate Golf at 1:10 PM