Legitimategolf In The Matrix 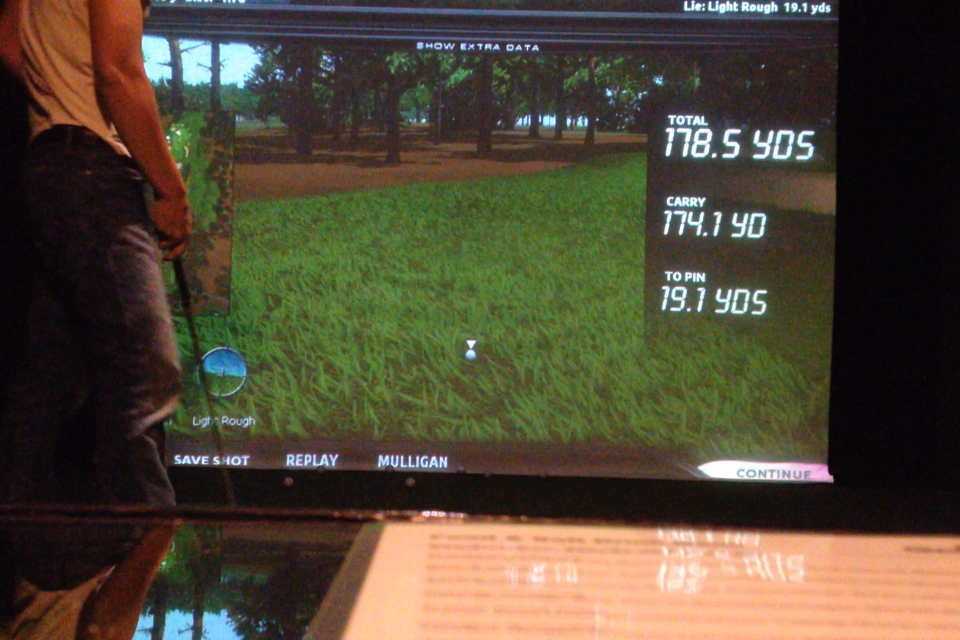 Launch monitor technology is everywhere in the golf universe these days. It's employed in telecasts to make the action seem more interesting. It's used as a teaching tool. And when calibrated properly a launch monitor is an invaluable sales tool for the retail industry.

I have mixed feelings. I mean, I suppose technology was instrumental in the discovery of the "new ballflight laws" which I'd consider somewhat relevant to living a good golf-life. But then again when you have rank amateurs freely tossing around terms like smash factor or angle of descent everyone loses, in my opinion. I mean it's natural to be wowed by all the hard data that comes out of these devices, but doesn't it seem that, on balance, worrying over such information creates more issues for golfers than it solves? (Granted I am a sucker for any conspiracy theory that involves the man trying to distract us from the real issues.)


As with any other technology, people eventually got around to finding a way to get their jollies with it. Until the weather of the current winter created an unbearable situation, launch monitors or simulators were never really on my radar so to speak. There've been times I might've been tempted to try one out at a golf shop, but I was always too leery of getting caught in a salesperson's tractor beam. 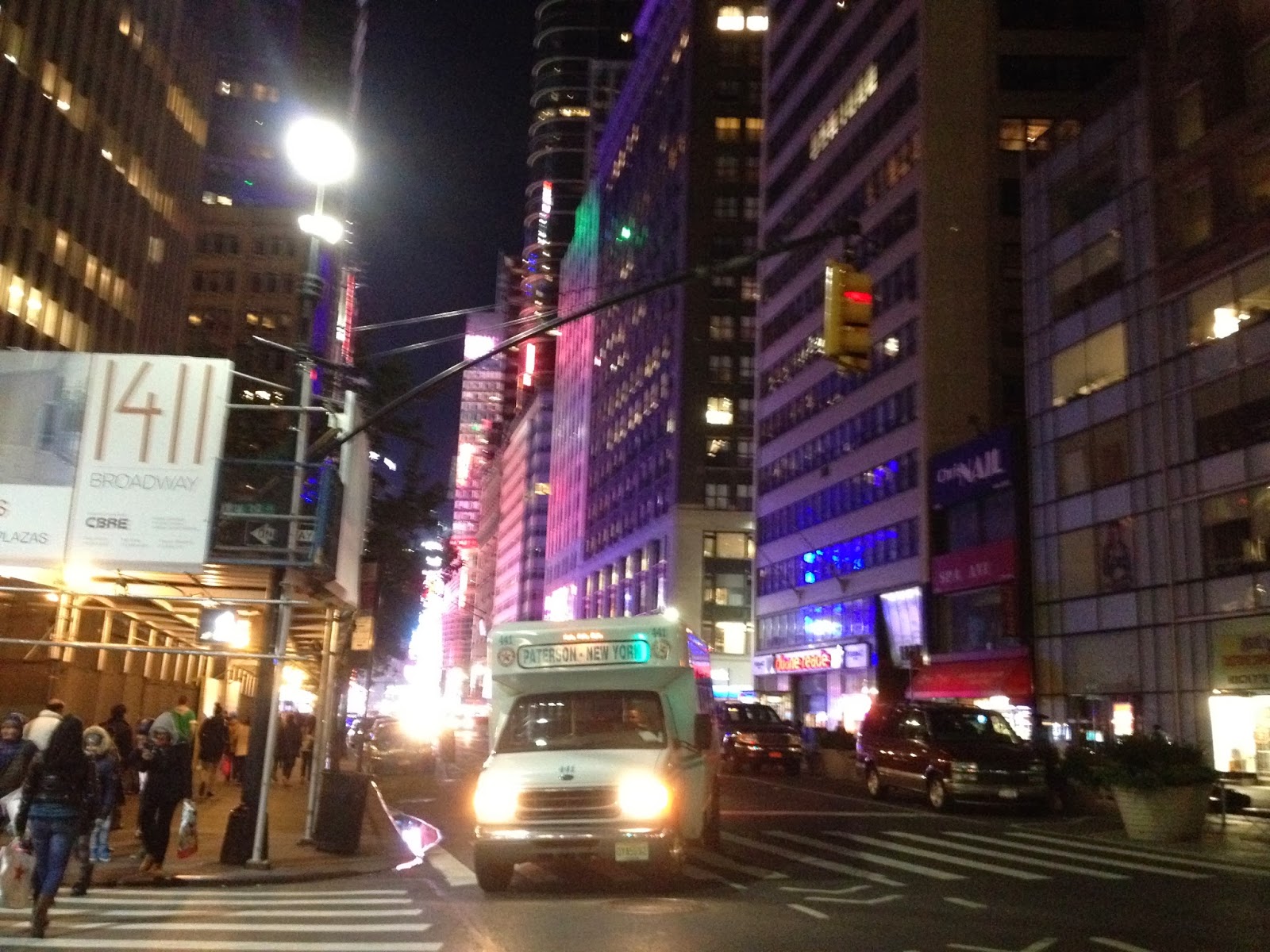 Now, desperation and withdrawal have finally led me to this. Golf Manhattan is a facility dedicated to simulated golf, located in deep Midtown. A golf studio if you will. It's been around for a few years now, which suggests there's a decent number of simulated golfers out there.

Specifically it's in the Garment District which is also in the heart of tourist central and dangerously close to the dreaded Times Square. But a very accessible location, close to all the major transportation hubs: Grand Central Station, Penn Station, Port Authority Bus Terminal are all within a few blocks. Probably more significantly it's in the shadow of midtown office hell, and who loves golf more than the desk jockey. 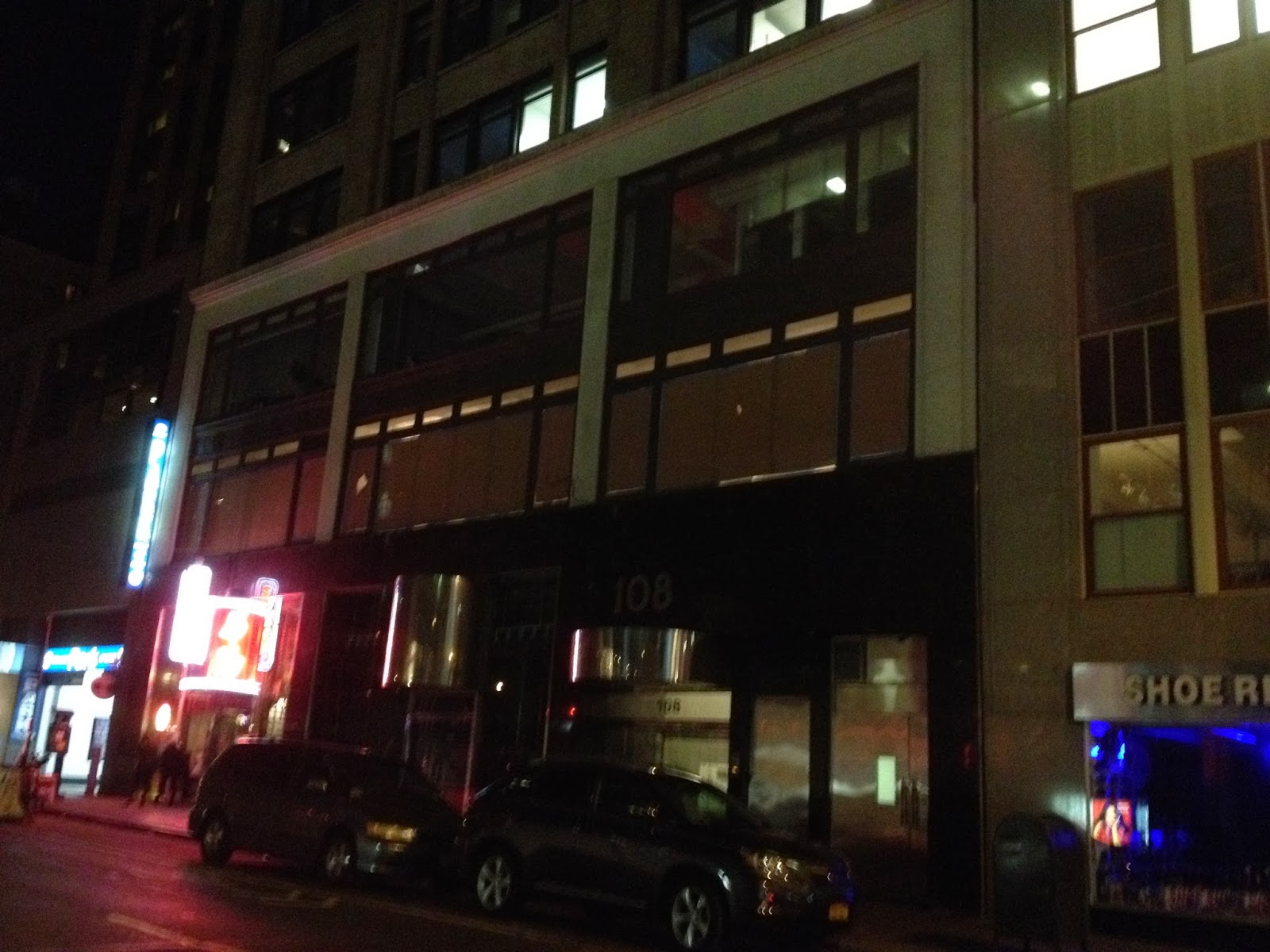 Lucky for me, Golf Manhattan is fairly close to the old homestead. Because if I had to make an extended trip in order to get this experience I'm not sure that I would've bothered. 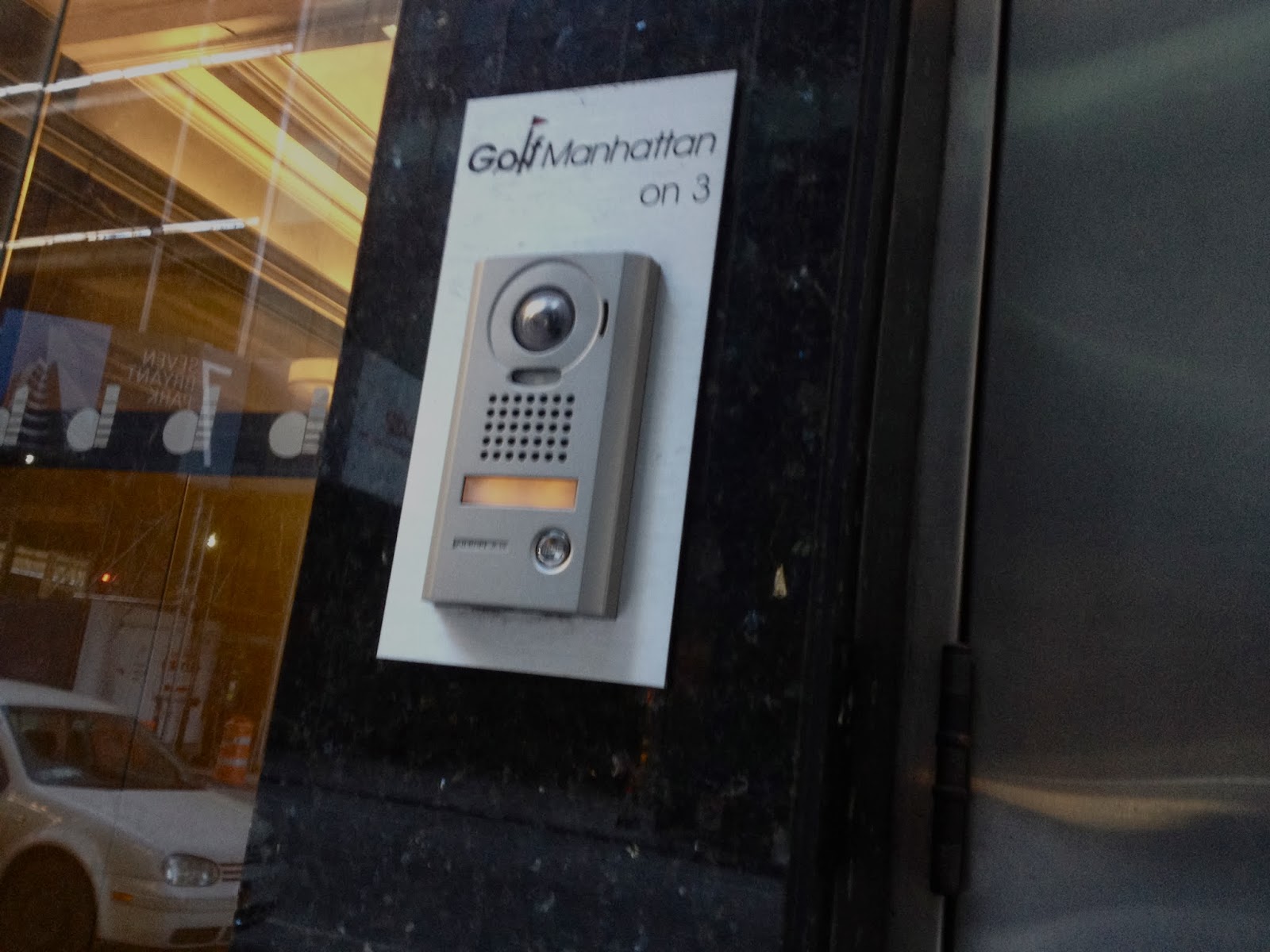 Like with a lot of places in the city, things look a little seedy and nondescript from the outside, a faceless office-type building. No sign, nothing indicating the presence of anything golf or fun-related within, except maybe this shady-looking video intercom thing. 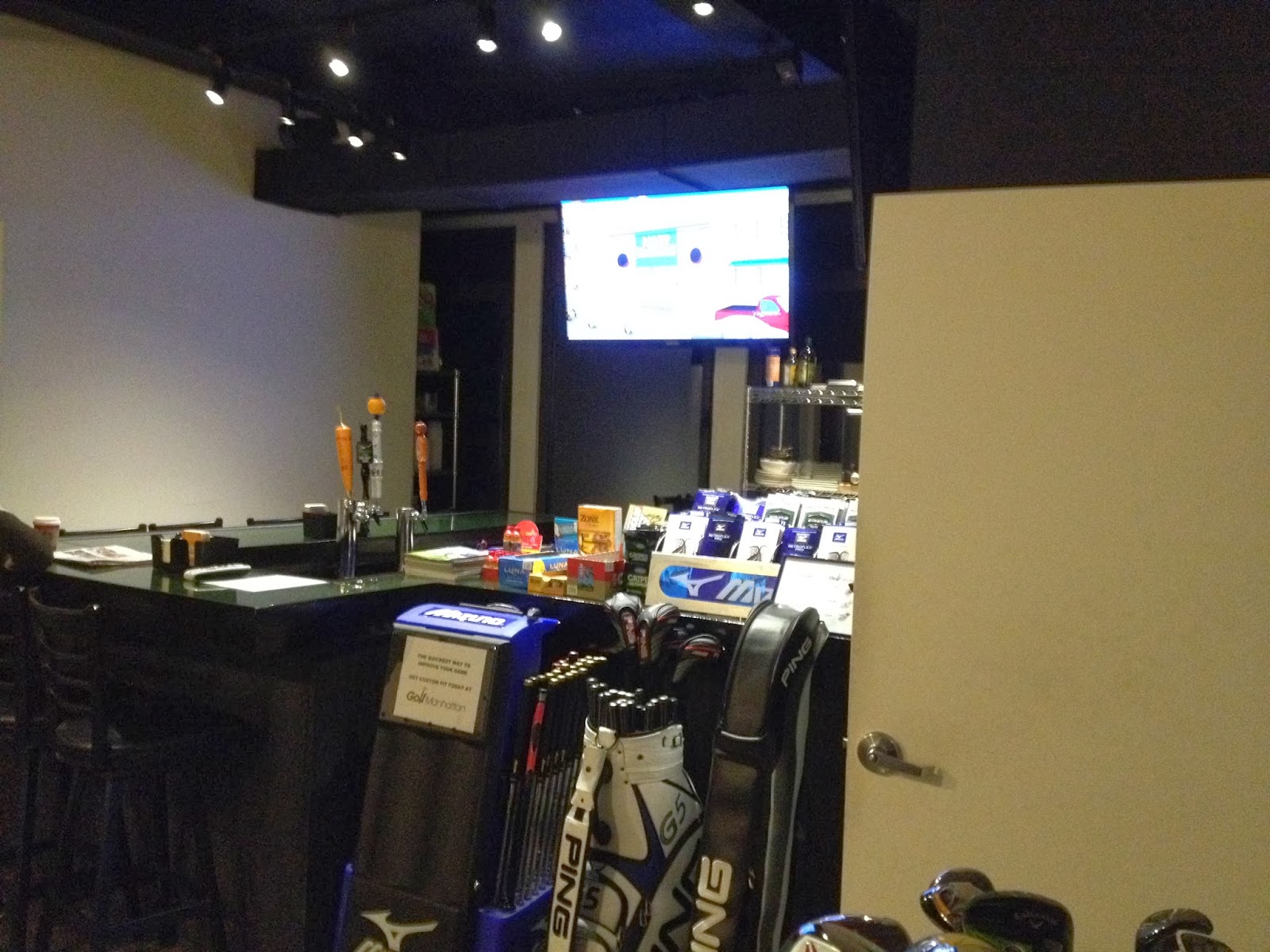 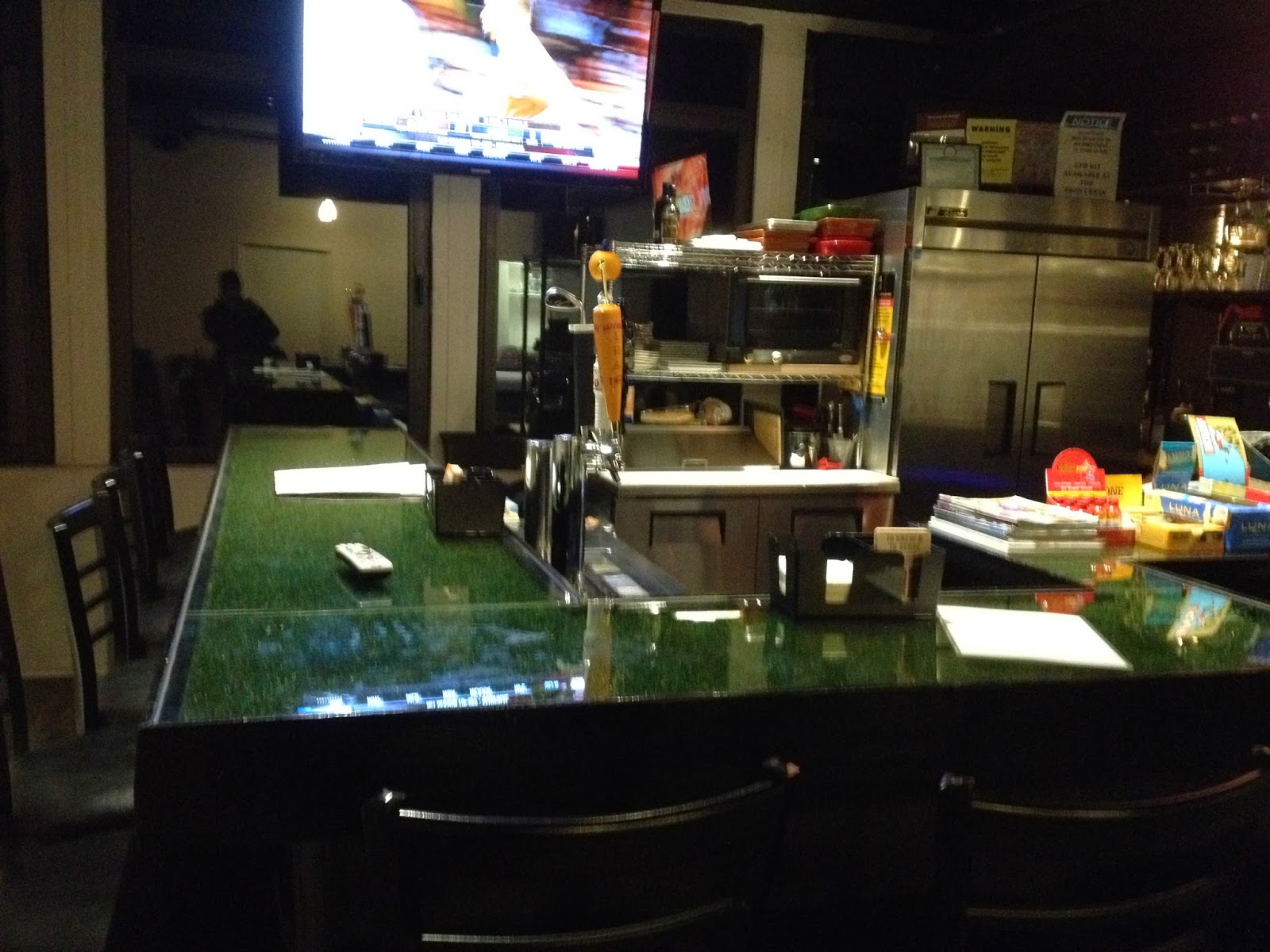 Tucked away on the third floor, Golf Manhattan is styled as a kind of sports bar. TVs abound. There's a beer and wine bar as well as a kitchen from which you can order up sandwiches and wings and what not. Personally while I'm renting out a pricey golf simulator by the hour I'd rather not burn up time sitting around munching appetizers, but hey, if it's a viable way to generate more revenue then more power to them. What you gonna do, rent is officially out of control around here. Anyways I get the feeling this whole experience is aimed not at me, but a more casual, swingin' set--attractive fun-loving young urban professionals that hang out in mixed gender social groups playing sports and trading high-fives, the kind of lifestylin' people that are well-represented in commercials for light beer. 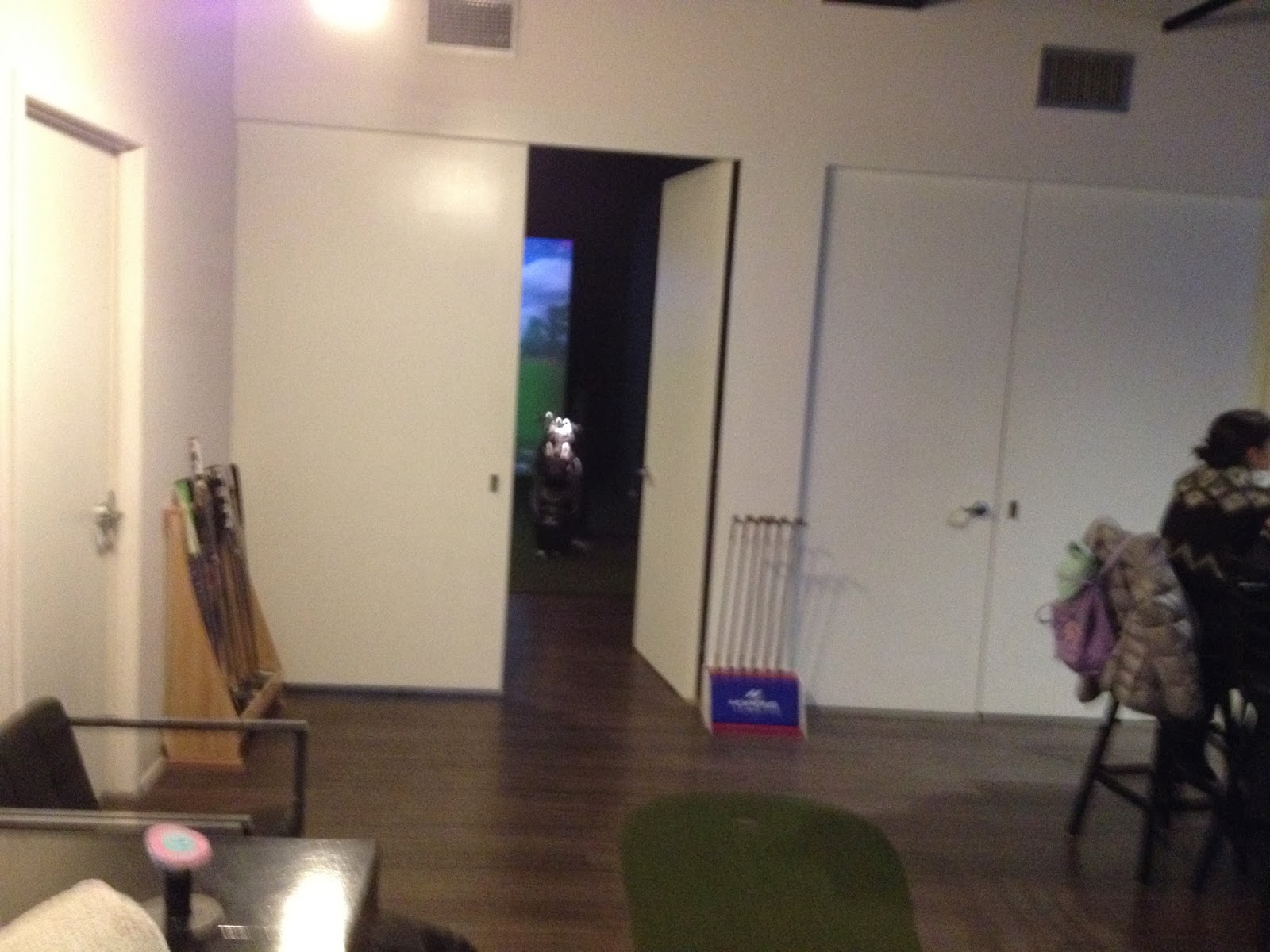 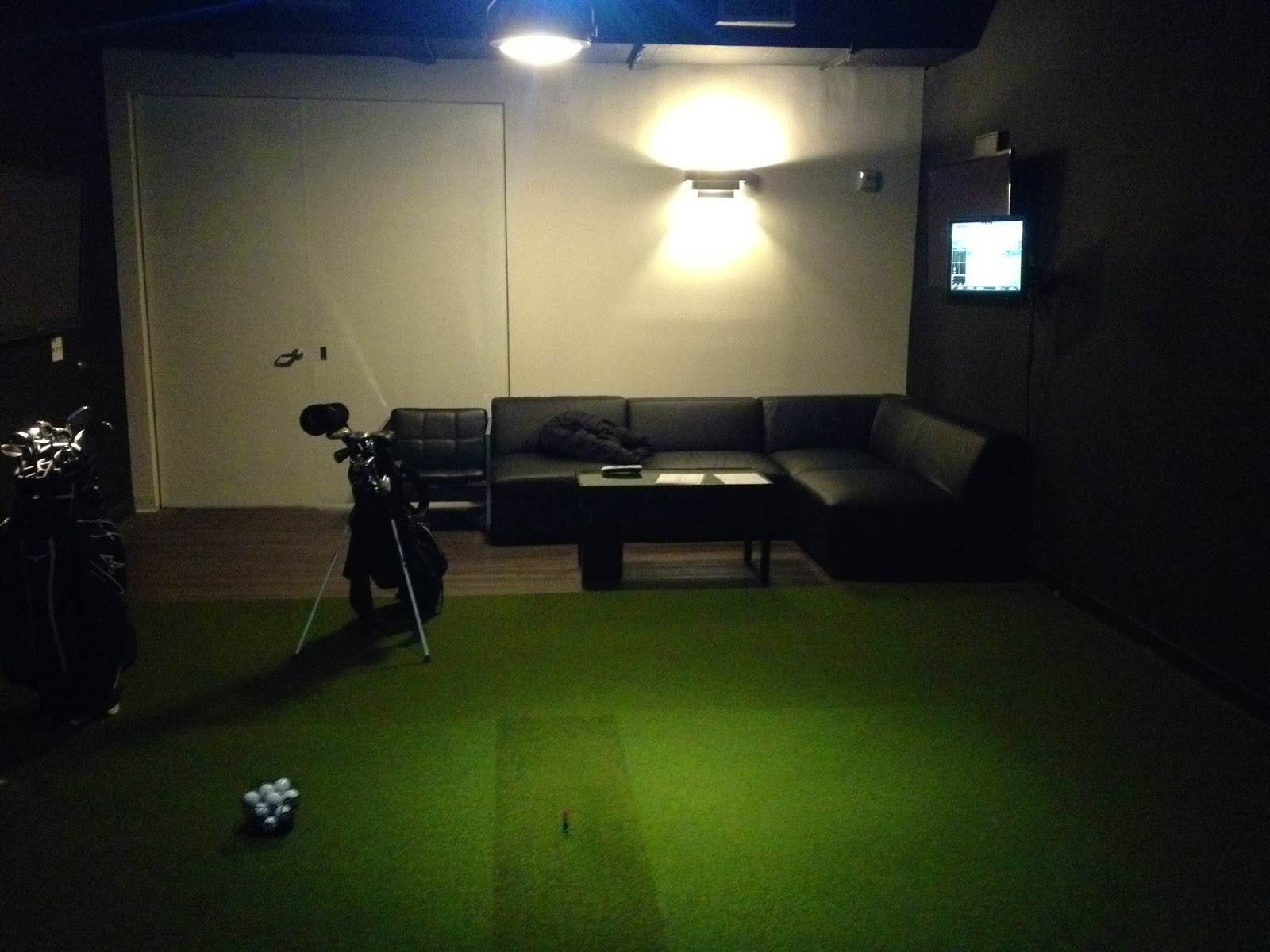 The kindly young man on duty showed me to one of four simulator studios. Here, they use "PGA TOUR" branded simulators, which based on the familiar name I'm going to assume are among the finest money can buy. Each room is furnished with plush leather sofas, golf-themed coffee table, TV's and mood lighting. They say you can dock your own audio device and blast your favorite music--but not today, my good man. I am here to take in all the pure sights and sounds of the simulated world. 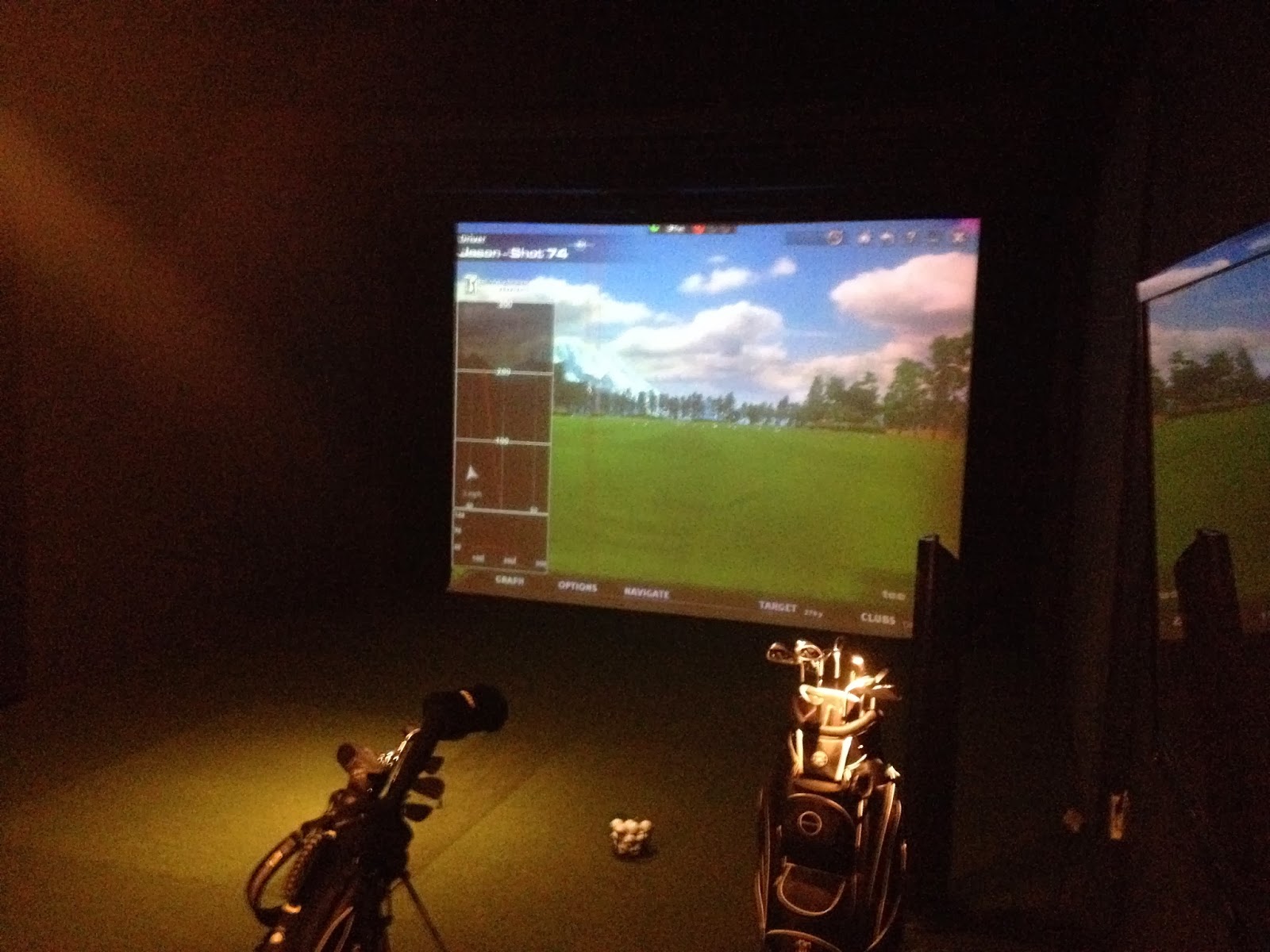 After a very quick tutorial about how to hit a simulated golf shot (ball has to be placed within a designated area; make sure the indicator light reads green), the door was shut leaving just me and the simulator. Of course, I'd gave the guy the impression that I'd done this before so as to spare us the whole charade of him showing me how to navigate basic, self-explanatory menus. 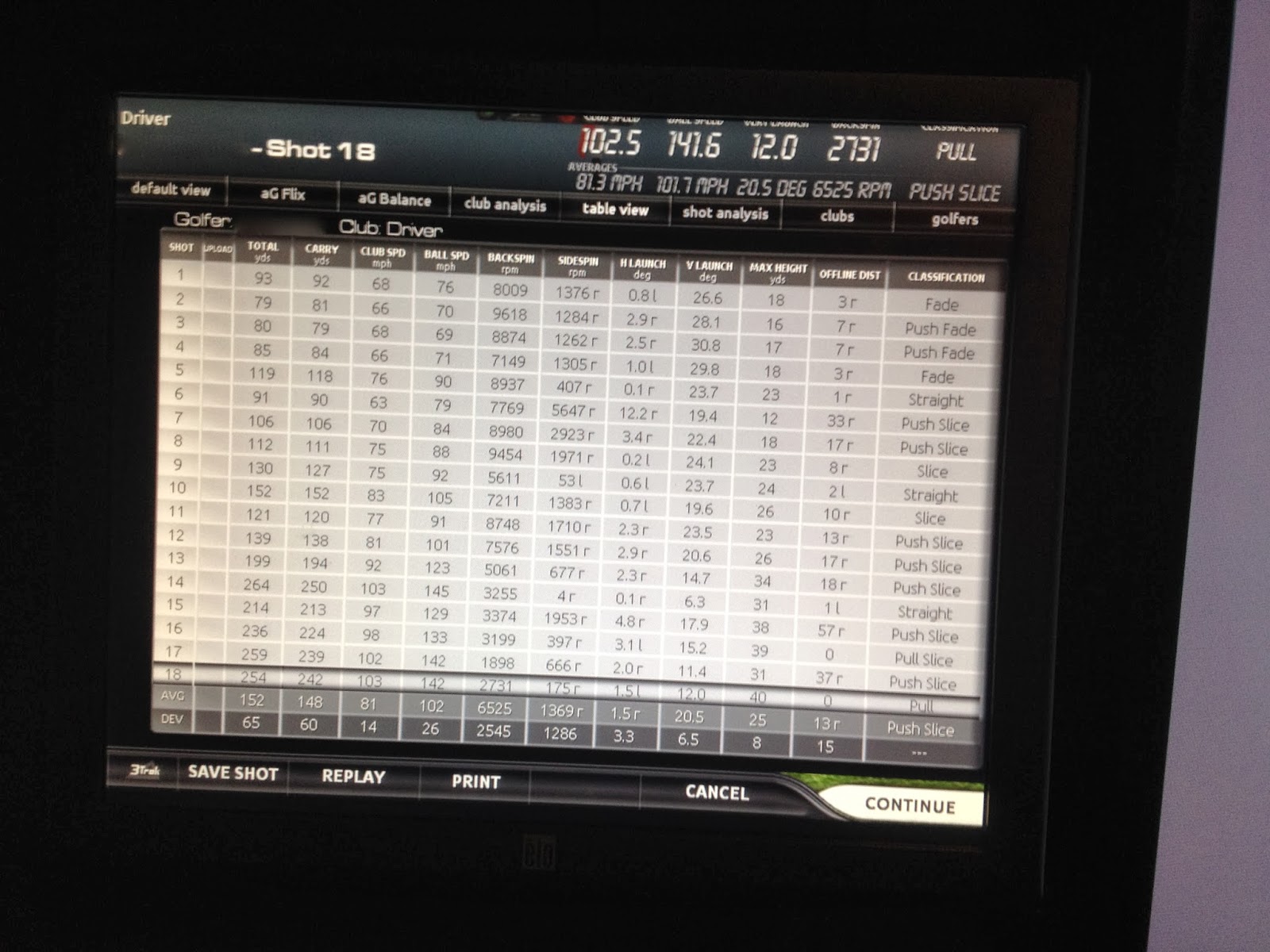 Far as I could tell there are two modes to this thing--driving range and golf course. Naturally I started at the range. After every shot, the machine throws up a bunch of numbers relating to swing speed, ball speed, RPMs, flight path, launch angle and more--everything about a shot that can be measured numerically, basically. 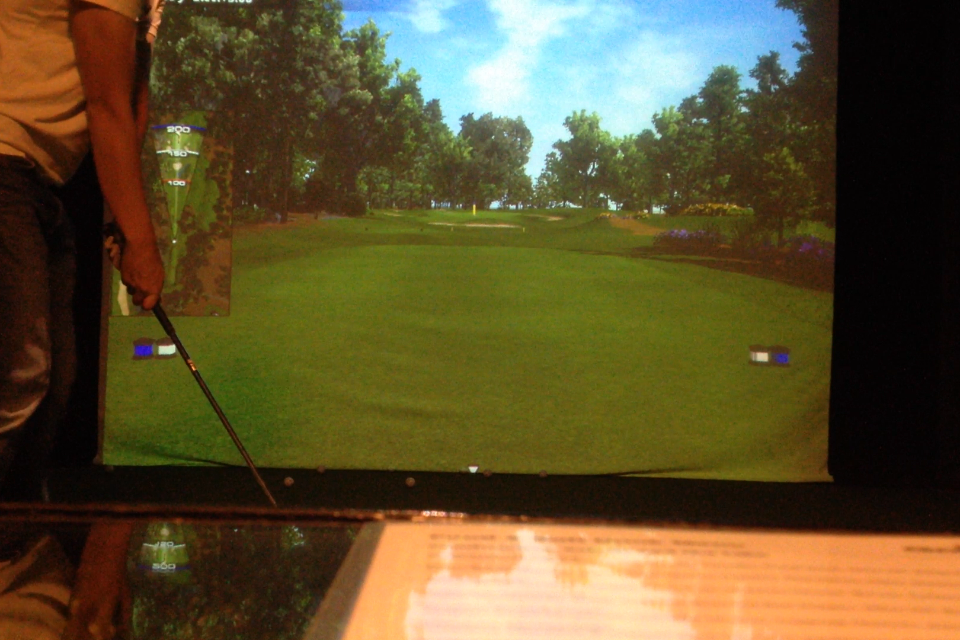 After a few hard swings--it's funny how that little swing speed readout can affect you--it was high time to head to the first tee. But at which course? So many choices, world at my fingertips. I fulfilled a longtime wish and "headed out" to the world famous Stadium Course at TPC Sawgrass. 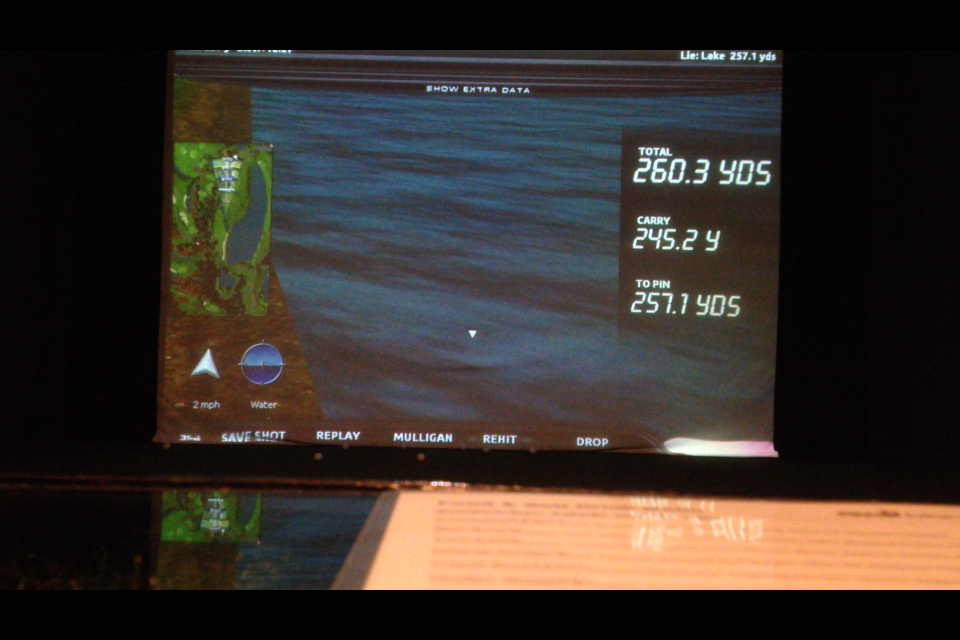 Well it turns out that simulator golf is not exactly easy. The worst part was when I got out of position. 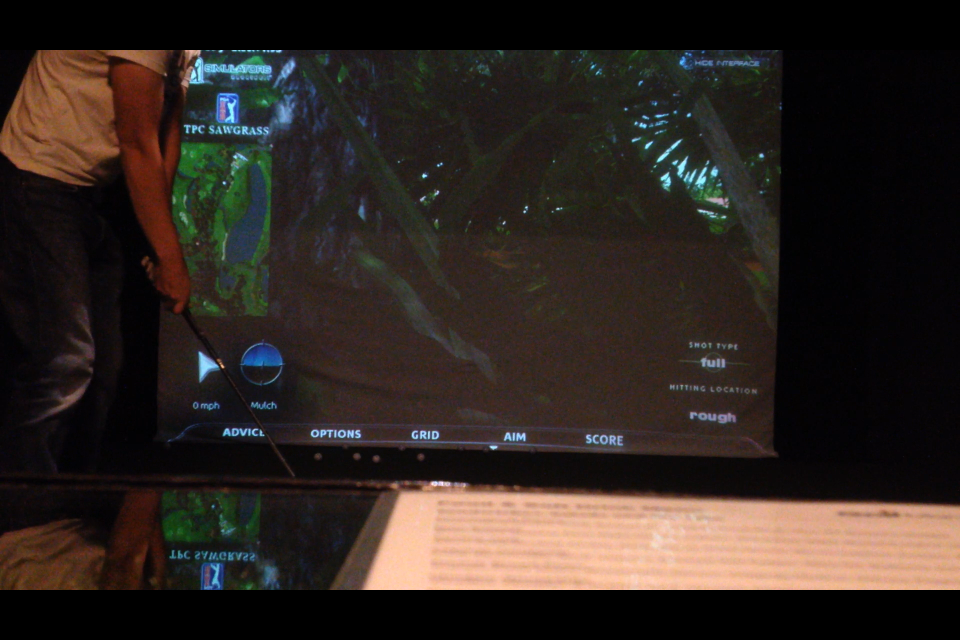 There are probably options to replay your last shot and avoid situations like this. As it turned out, complete disaster awaits should you get buried in the trees. I shot a 12, I think, on this hole. 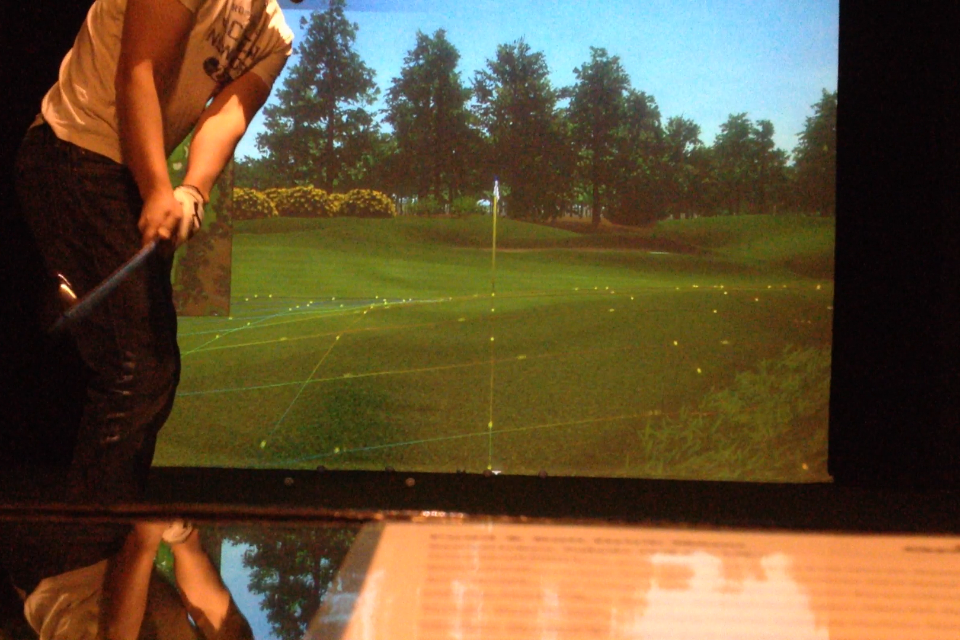 Chipping is it's own kind of a nightmare. Hitting a full shot in a vacuum is one thing; it works on some level. Just look down at the ball and have a full-bodied go at it. If you strike it normal, it "goes" about as far as you'd expect it would in real life. However when it comes time to make any kind of short distance shot, a feel shot, all you can really do is try to conjure a mental picture of what say, 30 yards looks like. For these shots the yardage number is way more useful than the picture. Either way is a catastrophe. I think I now have a better appreciation of what a blind golfer must go through.

Putting is as bad as chipping. The simulator understands this, and gives you the option of taking "gimme" putts: inside of twelve, nine or six feet. Making a compromise between integrity and practicality, I kept the gimme option on, but on the hardest setting. Again, like chipping, using the screen display as a visual didn't really work.

You know what, let's just skip ahead in our coverage to Sawgrass's iconic 17th hole, and see if I can at least salvage one good memory from this whole botched vacation. 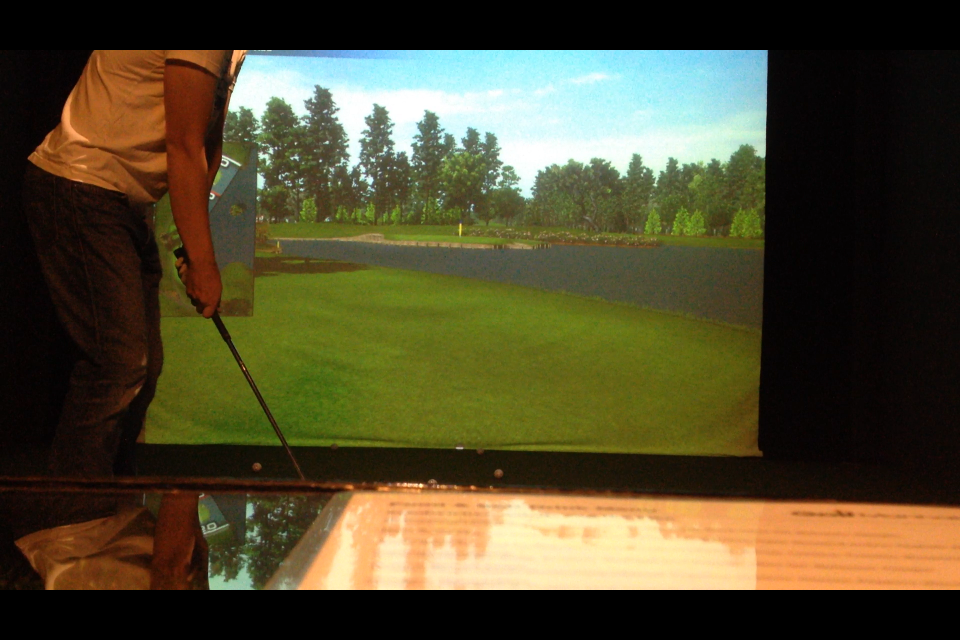 About a buck-ten to the hole, it says. I'll try the old ¾ wedge. 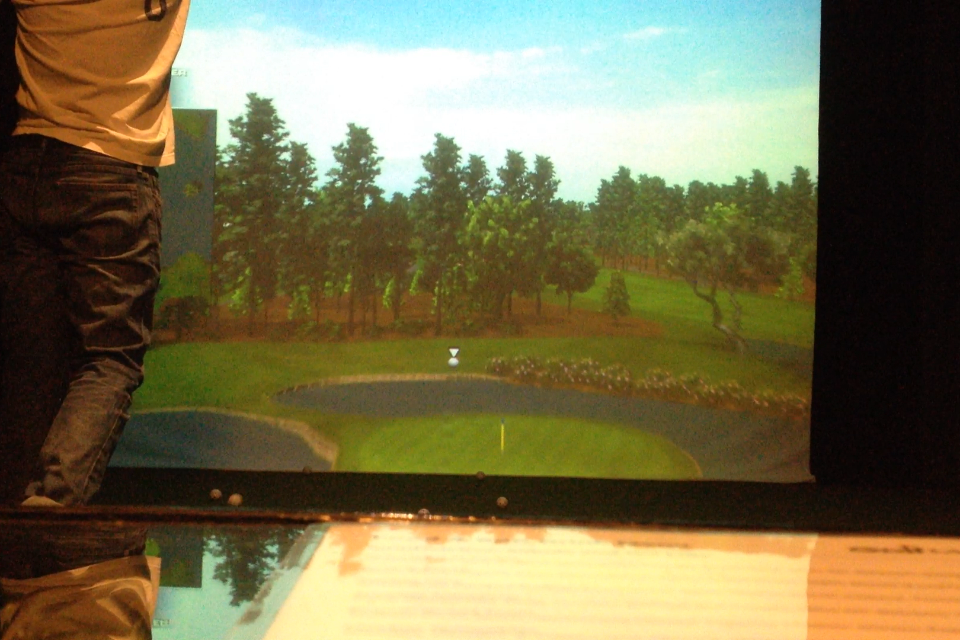 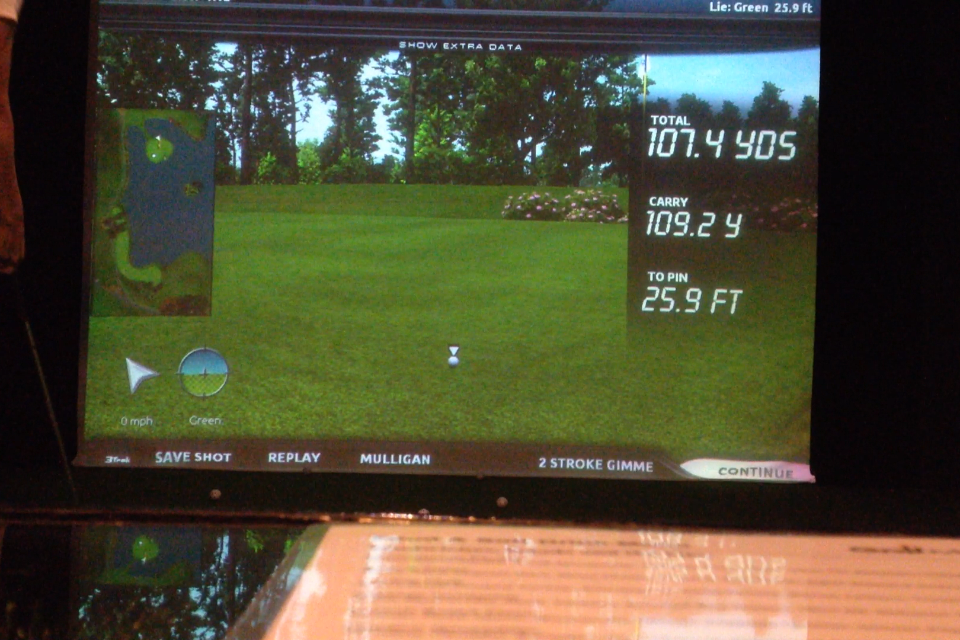 Ahh, it's safe. Even spun it back a little. I have done it--I have set up a birdie putt on one of the most famous golf holes in the entire world. A dream come true. Let's go back to the action. 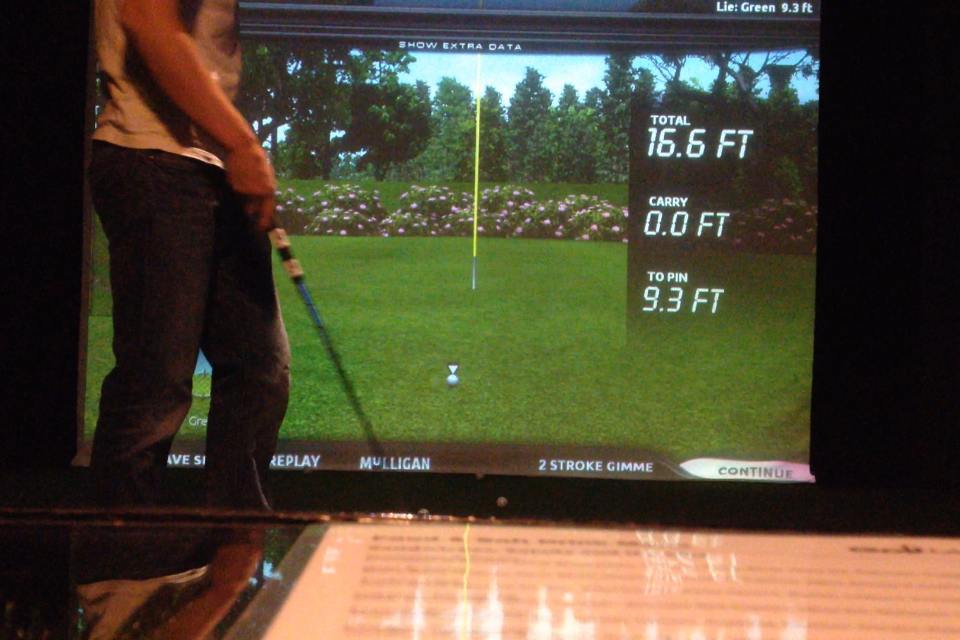 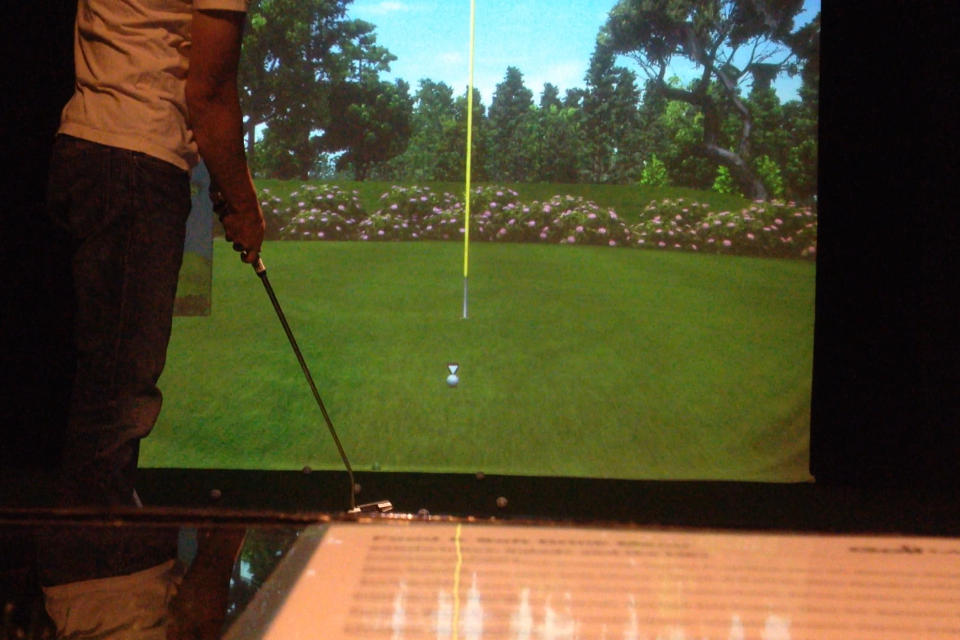 Here's the save-face attempt. It's... 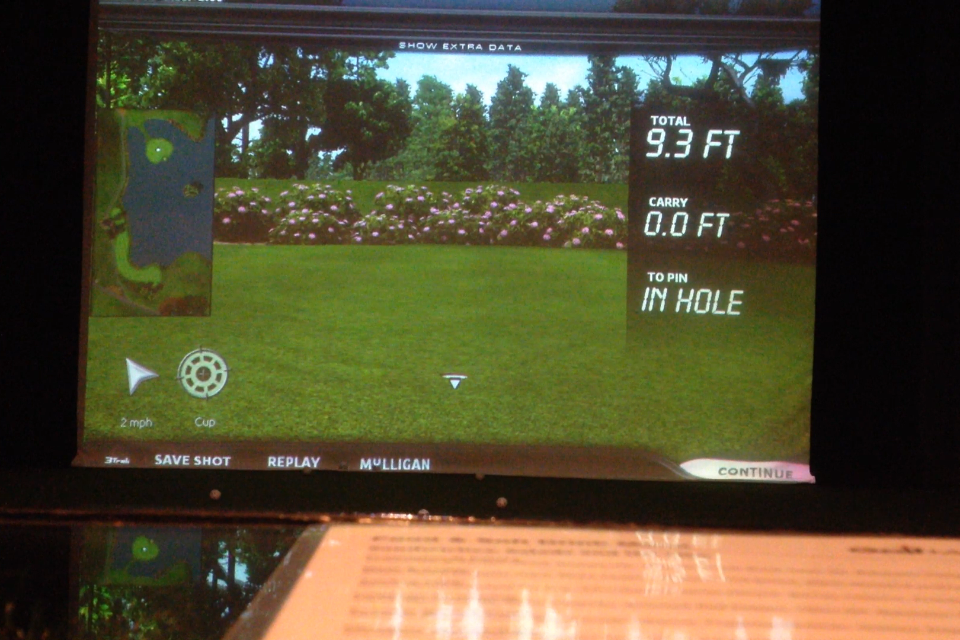 By the time I gimme'd my last putt I was ready to get the hell out. I failed to break 100. The simulated experience didn't even come close to satisfying cravings in any substantive way. Afterwards I tried hard to think up a scenario in which simulated golf might actually fill a need in my life. Short of some kind of nuclear winter/zombie apocalypse situation in which we're all forced to stay indoors at all times, I couldn't come up with one. 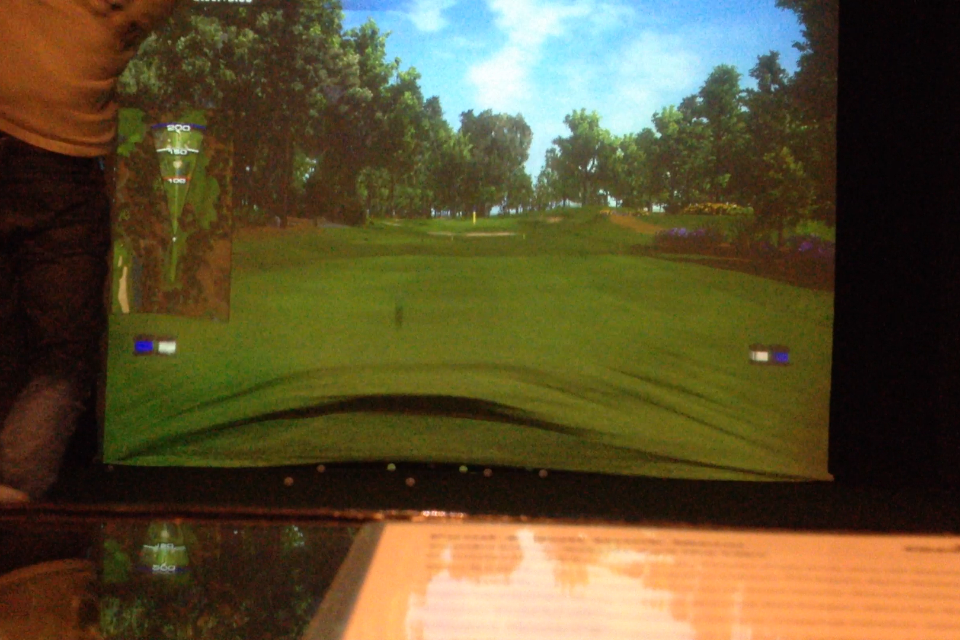 Probably the biggest nuisance for me was the smack of the ball hitting the projector screen, which was pretty jarring on any full hit. A huge part of the game is the physical release that comes from making a full swing, unleashing considerable force and setting the golf ball free from gravity. But in simulation, that release is almost completely stifled, and that's a lot of energy displaced in that smack, i.e. it's loud goddammit.

That smack is the exact moment when the actual physical ball "becomes" the on-screen virtual one, in a manner of speaking, and also happens to be probably the most problematic feature of the whole damn thing. The THWAP! sound had a way of snapping me back into reality. Where I had wanted to lose myself in the splendor of virtual TPC Sawgrass, the THWAP! was a painful reminder that I was actually confined in a Manhattan box and hitting into a plasticky thing about five yards away. After about an hour of it, the din gave me a slight headache. 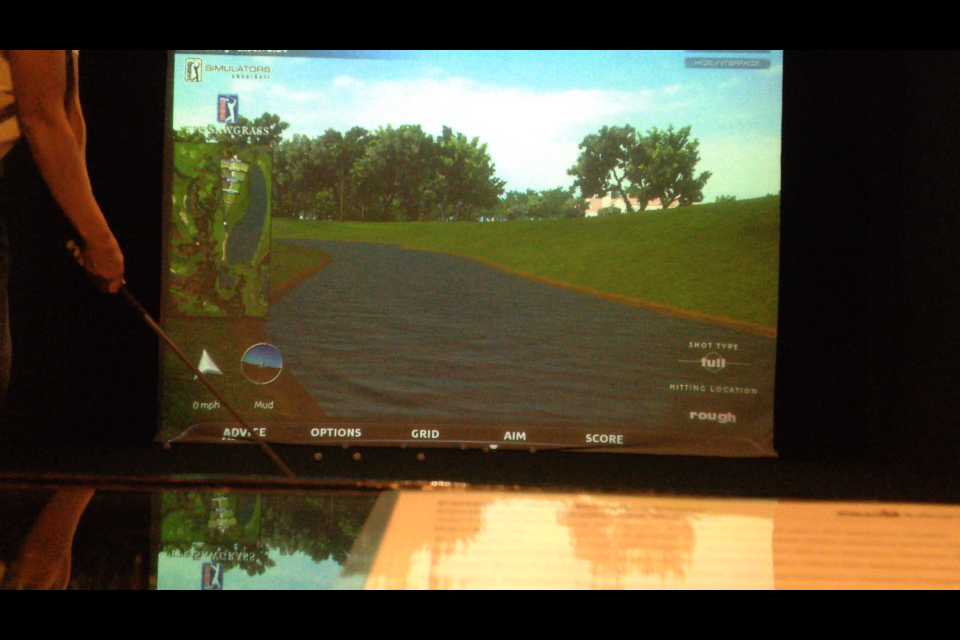 At the end of the day this is merely another golf video game, albeit with a controller that's fairly technologically elaborate and true-to-life compared to the usual ones. But as with any video game the overall experience is crude, overly simplistic and kind of pathetic when compared to the real thing, naturally.

When I grew up, back in the dark days of primitive digital entertainment, we enjoyed our share of video-based games. The graphics and sound resolutions might've been pathetic, but at least we enjoyed a clear demarcation between the physical realm and our digital gaming. There was a time to play sports and things outside, and a time to sit on your ass and work the controller. Trying to fuse the two activities is not something I would ever have dreamed of. But such is the world today.

Besides entertainment, simulation is touted as a means of game improvement, but I remain a skeptic. In my short time on that virtual range I got fixated on the swing speed and carry distance numbers and found myself swinging hard trying to produce results that matched my perceptions of my distances and what not. Maybe others would be immune to that effect, but it's hard to deny that the worst issues that plague the rank amateur--mishits, bad face orientation, bad swing path--are not ones that are helped in any way by knowing the metrics. 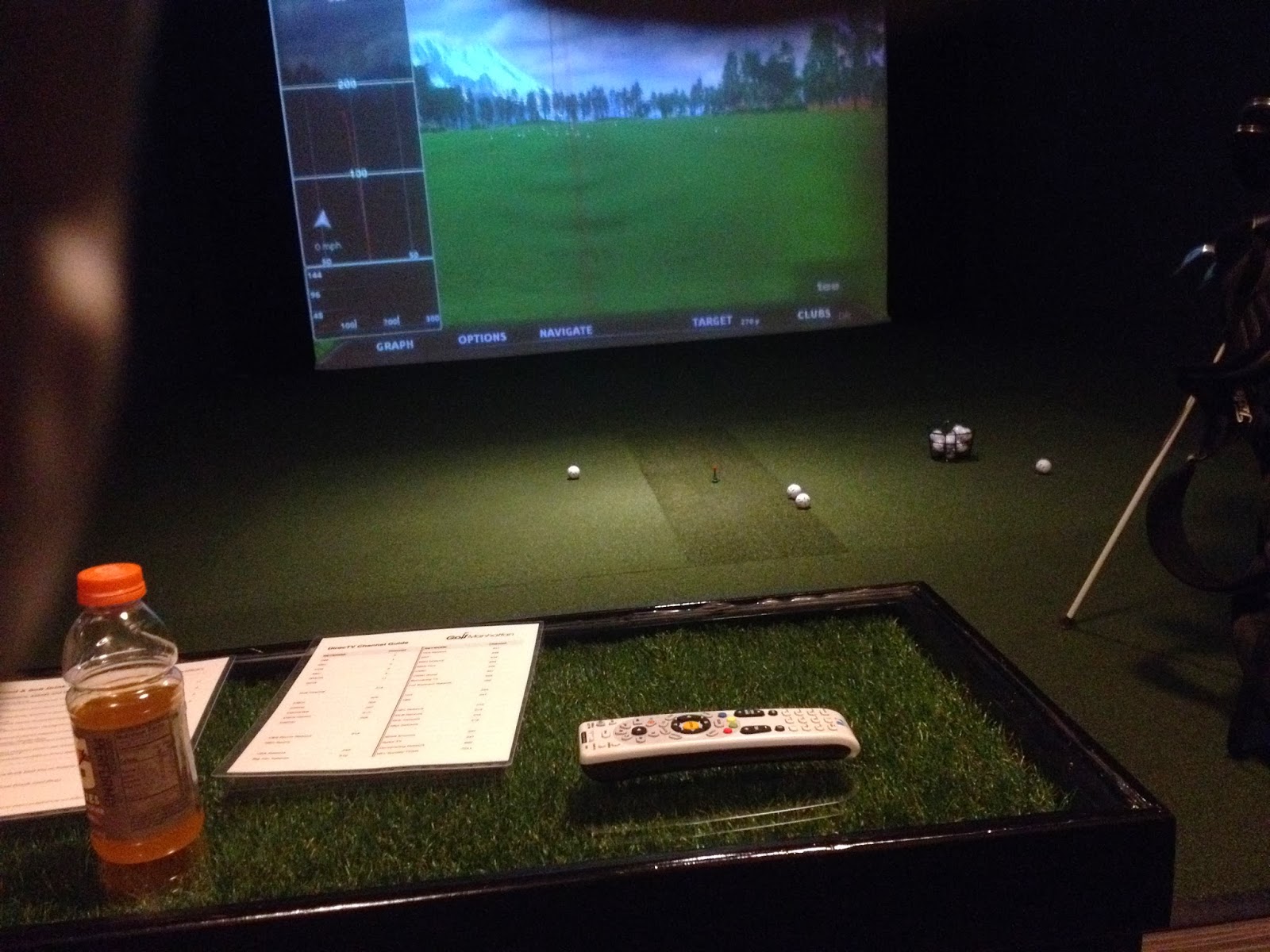 It should be understood that my feelings about simulated golf and those towards Golf Manhattan are separate. The place deserves none of my closed-minded scorn for they try hard and generally do you right. The facility is clean and modern and their house equipment is classy. As a business it gets a thumbs up from me--I may not be sold on what they're offering, but hey, that's my problem. Golf and its spirit are directly antithetical to the metropolitan ethos, so to set up a little safe haven in the heart of enemy territory, this virtual flicker of light comforting the wayward and lost, it shows some bravery, and a belief in the goodness of real golf.

I understand that as someone who has no real use for simulated golf I'm probably in the minority. But I get that it's here and here to stay. It will continue to be refined and made more realistic, its applications expanded, its accessibility and affordability continually improved. In a world that's only getting more overpopulated and resource-scarce every day, simulation is sure to become an increasingly legitimate way to enjoy the game. To me though, it's just another sign of the end.
Posted by Legitimate Golf at 9:24 PM