Creep of the Week: Legacy Edition 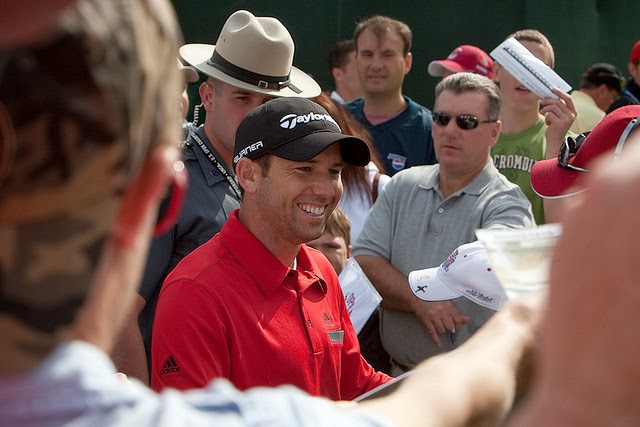 This edition of COTW is a departure. It's meant to celebrate, not condemn. Commonly overlooked in the discussion of golf's most colorful characters of all-time is Sergio Garcia. Actually when it comes to making headlines for bizarre behavior he is the runaway leader. Not John Daly. Not even close. And Sergio's melodramas tend to play out on, not off, the golf course, or else n the press room right afterwards, and that makes him the arguably more compelling golfer.


At the recent WGC Matchplay, Sergio added another page to an already impressive portfolio when he conceded that 18-footer to Rickie Fowler, for the reason that he felt bad about holding up play on the previous hole. By his rationale the only proper thing to do was to help his opponent win the match, which he did. To top it off Sergio went and gloated about the act to the press, talking about virtues instilled by his dad, while pointing an accusing finger at the golf world at large, which he says is not very gentlemanly these days.

It was an instant classic, the latest in a long line of them. You know, looking back through all the years of Sergio moments, it's hard not to think--Wow, this guy is creative. So I thought I'd compile a brief list of some old chestnuts.

October 1999, Surrey UK--slips while attempting a shot, removes a shoe and throws it into the gallery. After fans send the shoe back, he kicks it and narrowly misses a rules official's head. Is fined by the European Tour.

August 2000, Palm Desert CA--makes an enemy for life in Tiger Woods when he celebrates a little too hard after a narrow victory in their "Monday Night Golf" showdown.

June 2002, Bethpage NY--at an eventful US Open, accuses the USGA of favoring Tiger Woods and quarrels with Long Island spectators.

September 2005, Crans-Sur-Sierre, Switzerland--kicks over an advertising banner after a bad shot, receives another fine.

March 2007, Miami FL--reacts to a missed putt during the World Golf Championships at Doral by spitting in the cup, then justifies the act by claiming "it went down in the middle. It wasn’t going to affect anybody else."

July 2007, Carnoustie, Scotland--blames supernatural forces for bad breaks that cost him the Open Championship title, claiming his opponents include "more than the field".

May 2008, Ponte Vedra FL--in the victory speech that followed the biggest win of his career, actually thanks Tiger for being absent due to injury.

April 2009, Augusta GA--after shooting a 74 in the final round of the Masters Tournament, calls the golf course unfair; backtracks and apologizes a few days later.

June 2010 Pebble Beach CA--creates a potentially problematic rules situation when he attacks a tee marker and splits it in half, at the U.S. Open no less.

December 2011, Bangkok, Thailand--hurls a 5-iron in disgust into a lake. Though a fine was not reported, one was almost certainly issued.

April 2012, Augusta GA--after shooting 75 in the final round of the Masters, informs the Spanish press that after thirteen years of trying, he has realized that he is not good enough to a win a major title and that from now on should just settle for second or third.

June 2012, San Francisco CA--another U.S. Open, another bad tee shot. The victim this time was not USGA property, but an NBC microphone.

March 2013, Orlando FL--during the Arnold Palmer Invitational, climbs a tree to locate his ball, then successfully plays a backwards one-handed shot to dislodge it from the tree, but then withdraws two holes later citing a shoulder injury.

A golfer being associated with one or two such flaps wouldn't be remarkable. But Sergio has made it his calling card, and after fifteen years of consistently delivering fascinating displays of whimsy, by now it is clear there's a special kind of artistry at play. Most hacks would've repeated themselves by now. Not Sergio, who showed us last Thursday that he is still full of surprises. You never know what kind of confounding logic he is going to come up with next.

Some might point to this long history of questionable etiquette and call him a scourge. I would disagree, and argue that on balance he has added more than he has taken away from the game, probably. In a golf world full of boring personalities and canned responses, a little individuality is something to have.
Posted by Legitimate Golf at 6:51 AM

Email ThisBlogThis!Share to TwitterShare to FacebookShare to Pinterest
Labels: Creep of the week