A tribute to Not Bill Earle's Ball 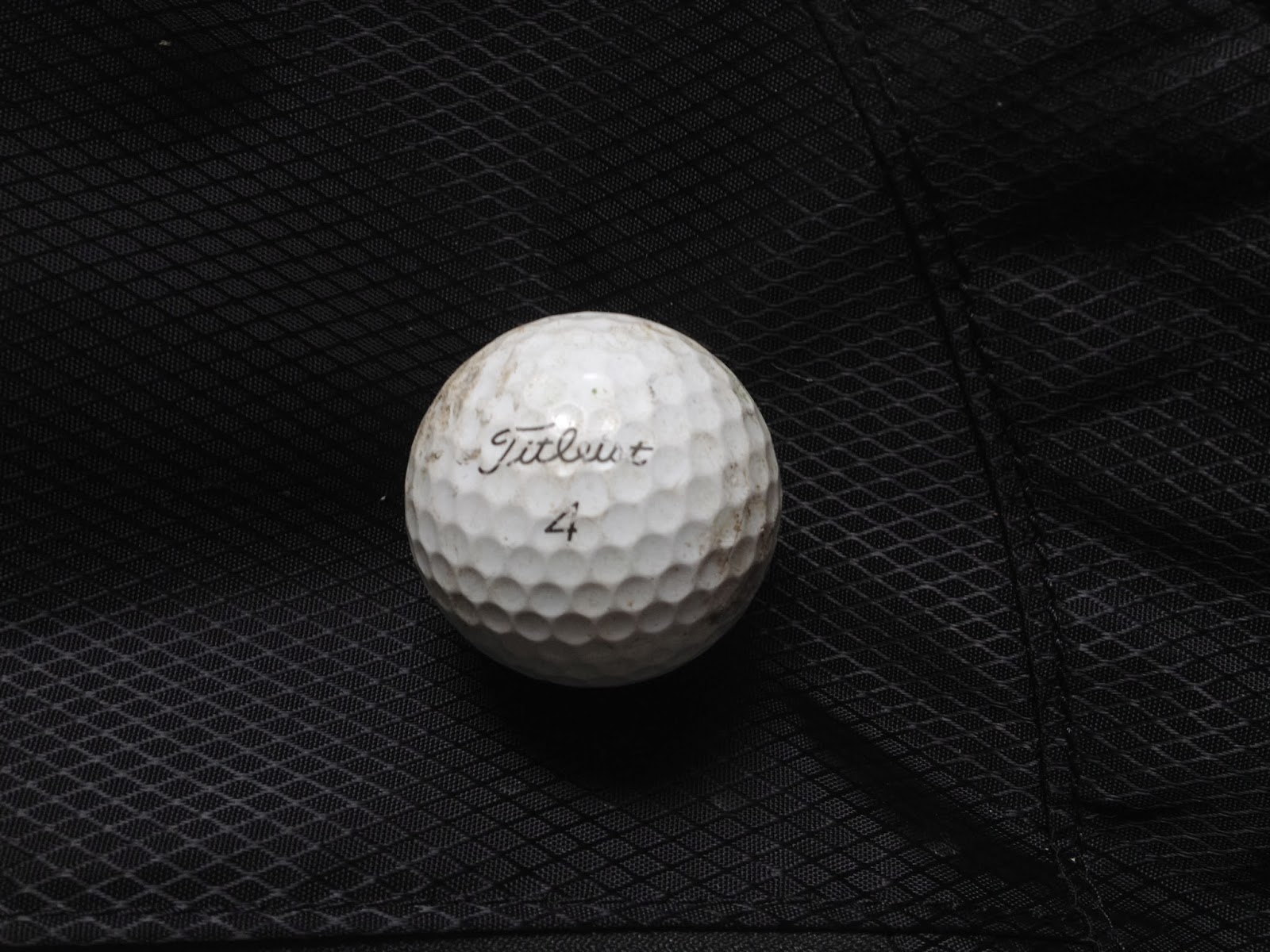 The ball, it's been said, is possibly the single most important piece of equipment in golf. The only one, in fact, that's involved in every single goddamn play that's made on the course. Metaphysically speaking the ball is, in a sense, our surrogate, our representative, our emissary to the sky. Wherever the ball goes, so does a little piece of our soul along with it. At its full flight best, a golfball is up there with Kitty Hawk, the Wright Brothers, Goddard's rockets, the Saturn V, etc and so on. Man's eternal quest to kiss the sky, soar like a bird, say "up yours" to gravity, and "eat my wake" to the earth, if only for a brief moment.


Other than putting together a low score for 18 holes, what's a more satisfying post-round feeling than that of having maintained sovereignty over one's ball all day. For to control one's ball is to control one's own destiny on the course. Or steer it in the right direction, at least. For most of us, just to safely pilot that puny little thing over the three and a half-plus miles from first teebox to bottom of the 18th cup, flying over bushes, water hazards, all kinds of unfriendly terrain and wilderness is sort of a wondrous feat.

And when you lose a ball, the sting comes not so much from the loss of a couple bucks' worth of sporting goods, but more from having failed an ally, and the guilt from having made it pay for your ineptitude with its life. While I try not to get weepy over mass-produced chunks of polymer, one's golfball deserves better than to be abandoned in some putrid pond, possibly until the next geologic age. Doesn't matter if it's a ProV1, Maxfli Noodle, or a hot pink Precept "MC Lady".

Because while balls are fundamental in the gameplay of any sport (worth playing), the golfball is much more than that--in practice it is a remarkably personal piece of gear. We send it into the ether bearing our lofty hopes and dreams. We try to boss it around while it's trying to do its job. We bitch at it, mid-air, to more or less defy the physical realities of the universe and then curse it when it fails. But in the best of times we could swear that the golfball is sympathetic to our purpose, that it has eyes for the target.

In spite of the ball being so crucial a piece of equipment though, its lifespan is too fleeting, its occupation far too hazardous for us to really form any sort of attachment to it. Which is kind of a shame really. 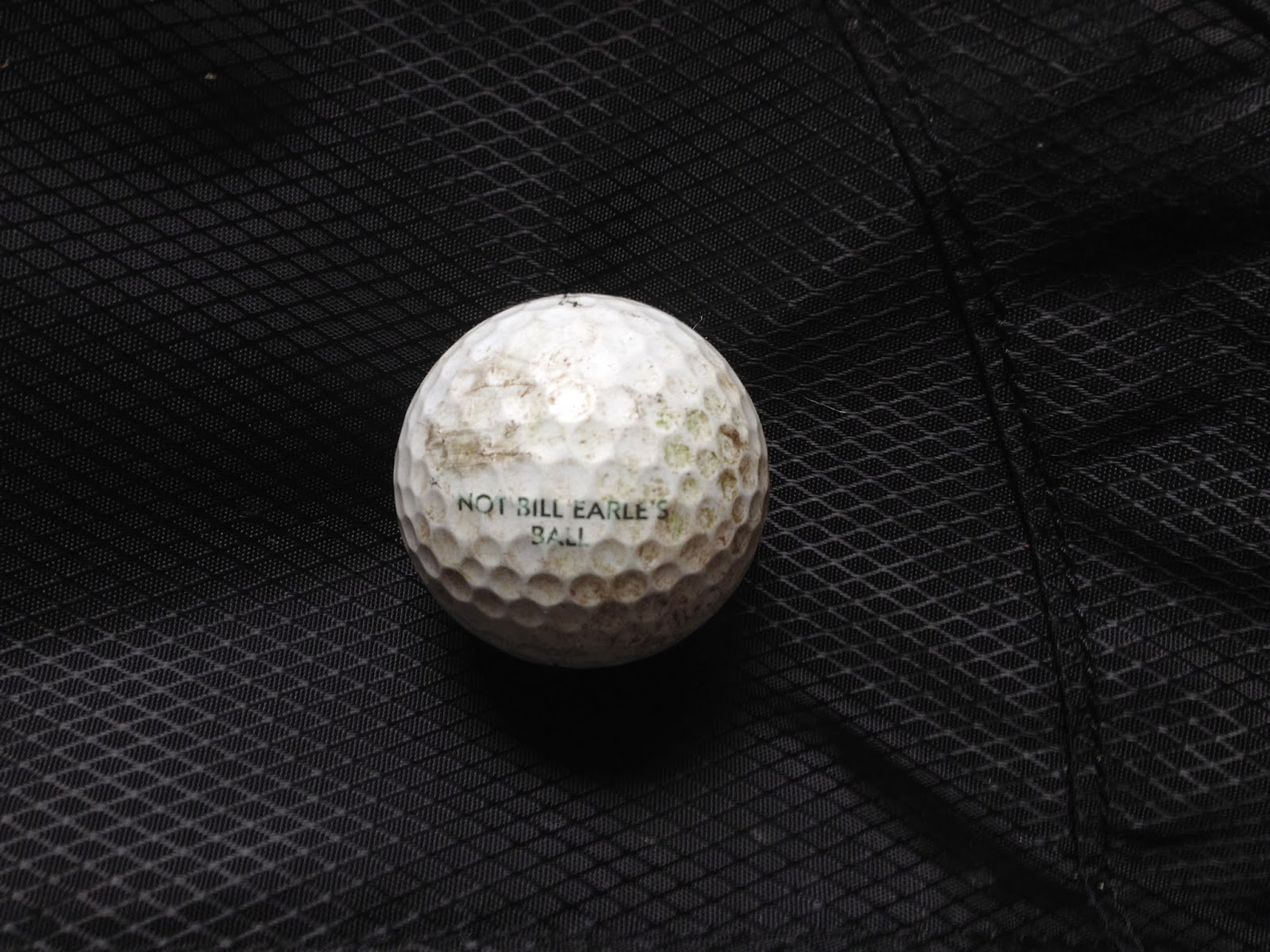 Once in a while though, a golf ball manages to buck the odds and survive multiple tours of duty. "Not Bill Earle's Ball" is one such piece of gear.

"Not Bill Earle's Ball" is a circa 2012 model Titleist ProV1, standard issue in every way except for the slightly-nonsensical custom imprint. It was first called into action on January 9th, 2014, on the third hole at Dyker Beach after my original tee shot went mysteriously missing. "Not Bill Earle's Ball" then played the remainder of that round and three full subsequent rounds. That's seventy consecutive holes, played over three different courses, in three boroughs--Brooklyn, Staten Island and Queens.

A grizzled survivor, it has seen more adventure than your typical rank amateur's ball. Naturally it's chafed against tree trunks, cart paths. By now the original out-of-the-box luster is gone and the logos are half-worn off. But it has also enjoyed some nice interactions with my clubfaces. Because I've been swinging it pretty well I've really enjoyed smacking this thing on the nose and attempting to shred its skin off with wedge grooves, etc. It made birdies in Brooklyn and Queens. It strained hard with me to break 80 at Dyker Beach, only to be foiled by a late double-bogey.

In the course of those rounds, not surprisingly there were brushes with danger. We flirted with the OB right that literally flanks the green at #17 at Silver Lake, likely saved from oblivion by some soggy turf. A lucky thwack against a tree limb bounced the ball back into play at #15 at DBGC. And if the pond guarding Douglaston's 17th green had not been drained for the winter, you would likely not be sitting here today reading this protracted tale of "Not Bill Earle's Ball". 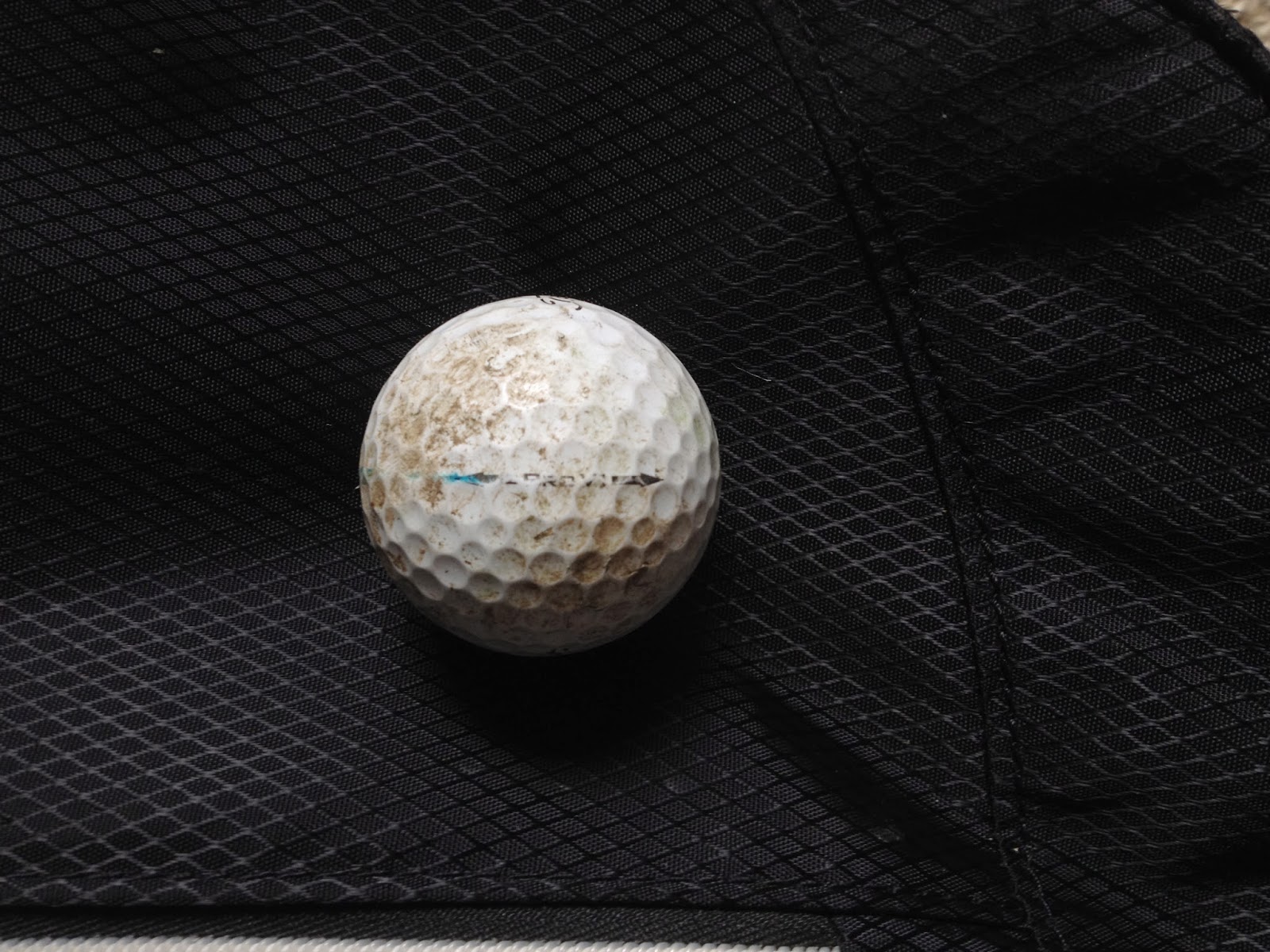 For the past couple weeks the ball has been spending the winter resting safely on my dresser, but what does the future hold for this workhorse? I'm tempted to retire it for sentimental reasons, and in recognition of exceptional service; although, there seems to be life left in it yet. It's all unclear at this point since we're still under snow, but something tells me that when a golf course finally does open, "Not Bill Earle's Ball" will be right there with me on the first tee, ready to go.

It's what it was born to do after all.
Posted by Legitimate Golf at 1:27 PM