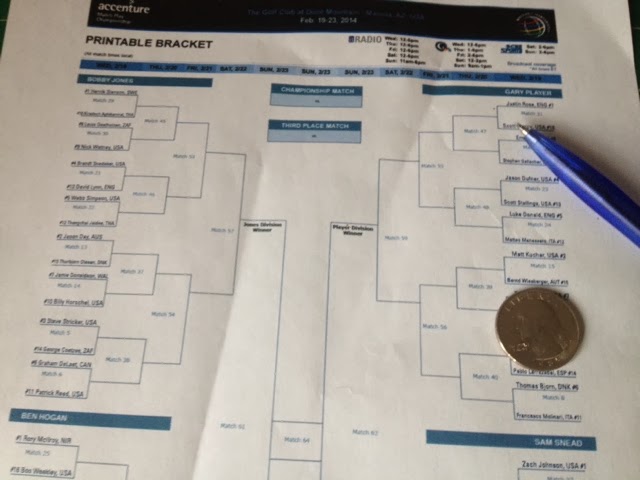 It's been a while since a shit was given about PGA TOUR golf, so here goes.

When I was growing up back in the dark ages, a.k.a. the eighties and nineties, sports betting was regarded as a vice and an illegal activity. Then one day, well into adulthood, I wake up and suddenly realize that sports betting is now a normal acceptable feature of ordinary life. Now, people talk freely about their wagering exploits online. Now, otherwise law-abiding folks openly and regularly engage in office-wide betting pools, during work hours for Christ's sake. And employers don't even look twice at any of it. Everyone's in on it, schoolkids, grandparents, hell even most chicks nowadays put some cash into their workplace March Madness contest.

Every goddamn person in the western world seems to be cashing in on this wholesome-yet-lucrative hobby. Everyone except me--naive, clueless, slow-adopter. What the hell happened, where was I when all this was approved. When it comes to sports betting I might as well have been in a coma for the last couple decades.

Sports betting in any form is ill-advised behavior, but betting on golf is probably the most reckless and futile of all the forms of gambling. I don't have to tell you that the outcomes of golf tournaments don't exactly follow patterns or predictions as those of most other sporting events. In pro golf a contest might involve 140+ players, the majority of which have a realistic chance of winning. Upper echelon players can miss the cut entirely and be hardly noticed, because duh--everyone who follows knows it's an extremely fickle sport.

Trying to guess the winner of the PGA Tour's only matchplay tournament is even more futile. This is nothing like the NCAA tournament; don't believe what the man tries to tell you. In basketball you pick winners based on the strength of teams and upsets are the exception, not the norm: in the history of the NCAA tournament, no 16-seed has ever taken down a number one. In golf though, matchups mean nothing. Nothing!!! Yet a lot of the golf establishment still goes bonkers every year with their own March Madness-style contests, complete with splashy prizes.

I want to get in on the fun, but who can be bothered to waste any time or brain power trying to make smart picks? If the outcomes of this event historically don't conform to patterns, then picks should be made accordingly. So I based mine entirely on coin flips--heads for the top name, tails for the bottom.

The random universe in this case, predicted a borefest. Notably I have McIlroy getting bounced in Round 1 by lowly Boo Weekley, and the other top four seeds leaving in the next. My "final four" consists entirely of golfers who even huge fans of pro golf couldn't pick out of a lineup: 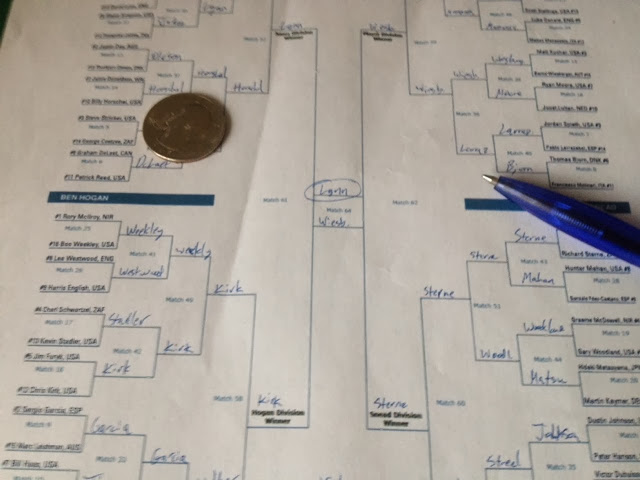 According to the coin-flip, Lynn prevails over Wieseberger in what would be NBC/Golf Channel's worst-case nightmare scenario of a final. The whole bracket of results was surprising, way different from what anyone who knows about pro golf would've predicted, and at the end of the day kind of stupid. But hey, I stand by it. Especially if it results in me winning that "stay and play trip for two to La Quinta Resort & Club" or those "tickets to the 2015 Matchplay Championship".
Posted by Legitimate Golf at 8:44 AM