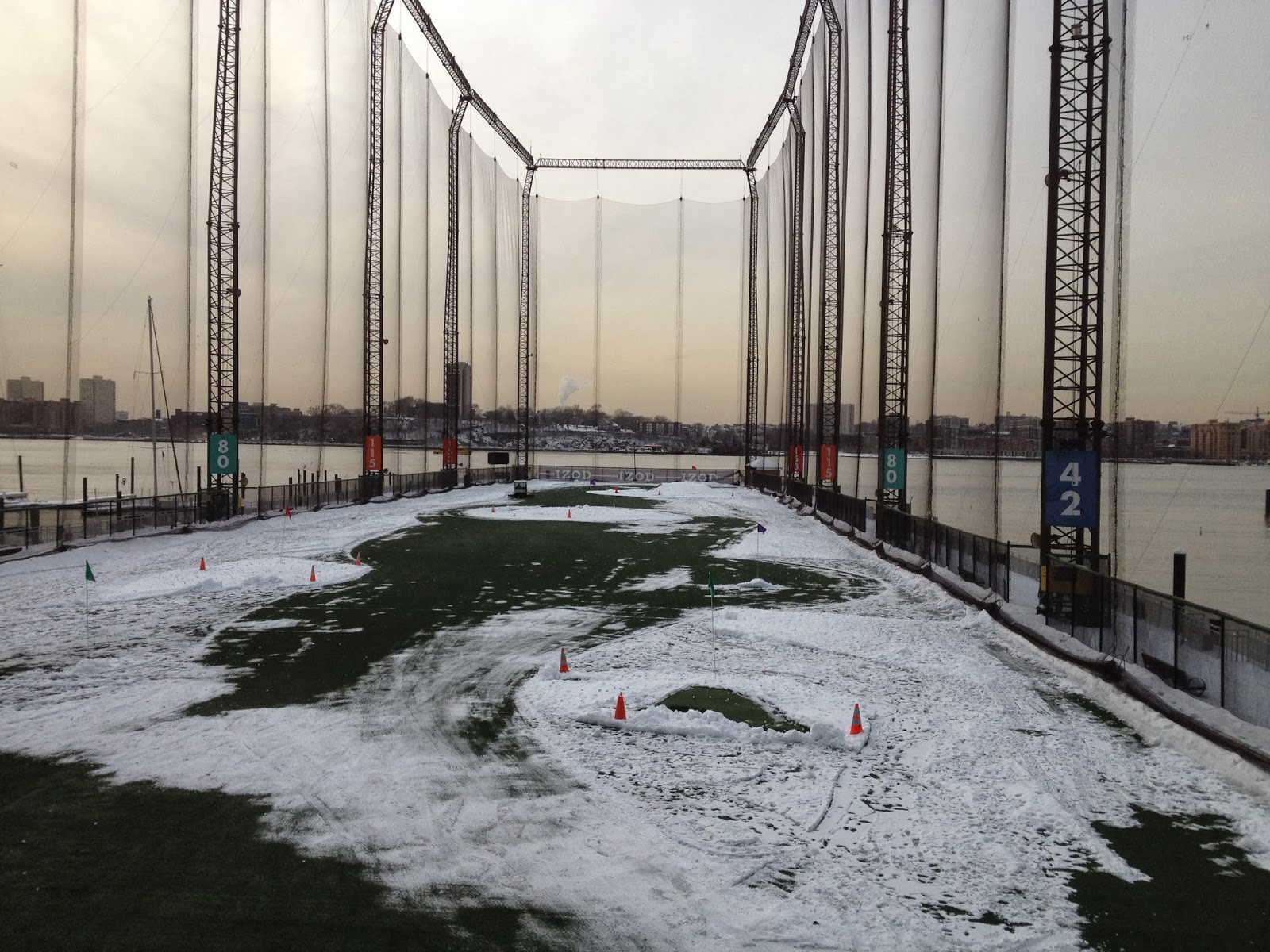 What I've come to realize in the last few days is that this current winter is the worst winter I've ever experienced. Funny that I'm just now figuring it out. Then again this one didn't really come out and announce itself as the winter to end all winters. It just kept piling on slow and steady, and now it's all this.


Contrary to popular belief, the tri-state area is somewhat of a temperate zone and in most years we can eke out at least a few rounds during the winter. 2010 to early '11 was an exception though--golf was completely blacked out for over three solid months.

This time around I was lucky enough to play on a semi-regular basis up until mid-January, so technically we're still in far better shape than in those dark days. That's what I keep telling myself at least. Yay. 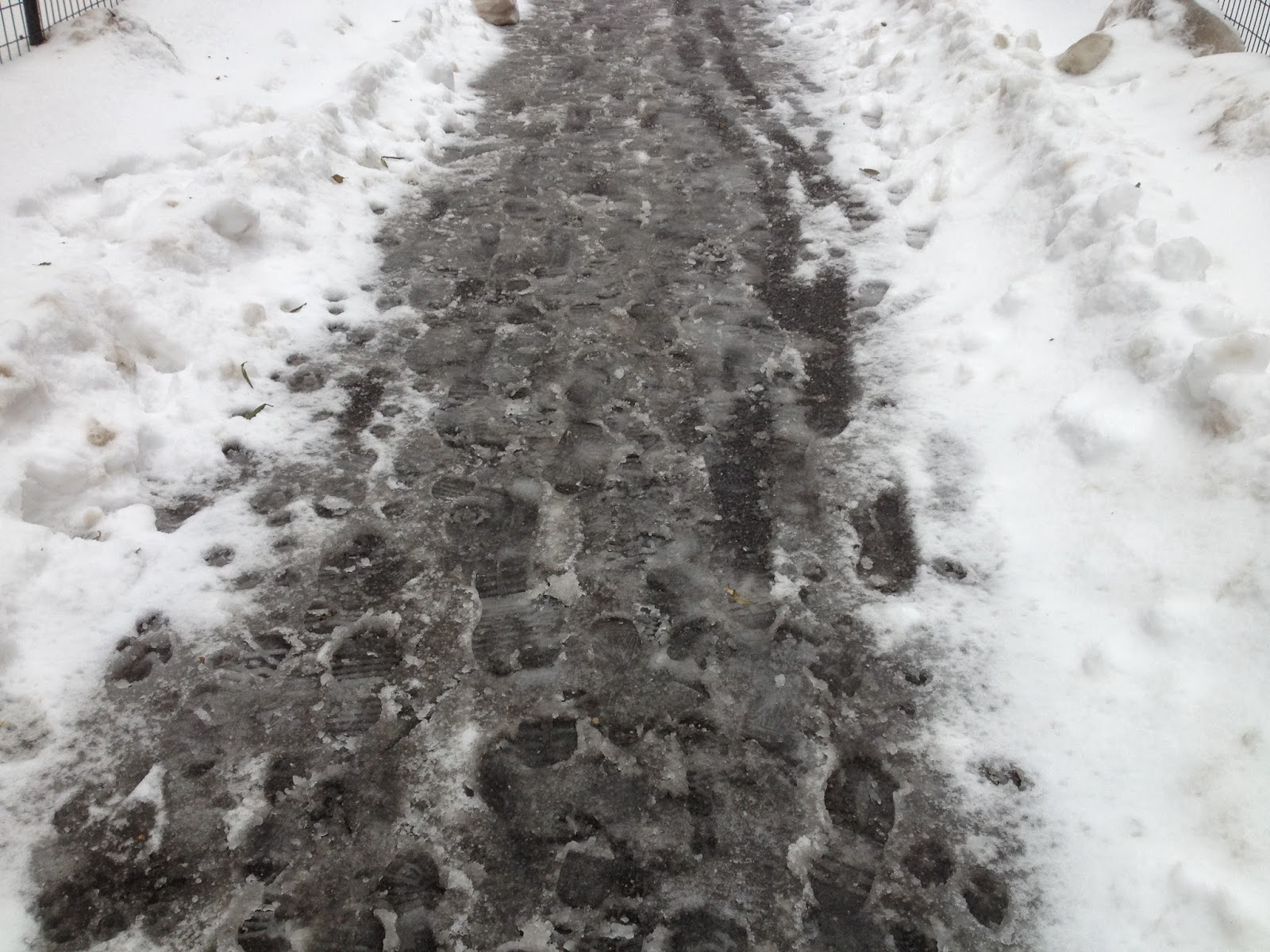 Still, even the most annoyingly chipper of Pollyannas could not deny that it's been an exceptionally shitty season in its own special way. Various reports say that the previous month was the coldest January since the thermometer was invented. By the looks of things it will be well into March before any real golf shots are hit in the Northeast.

Outside right now it's complete shambles. Some snow masses here in the city are so big and so persistent, they're practically geographical features by now. Might as well update all the maps because this is the world we live in now, and gonna be for the foreseeable future.

The mess out there is so thick and stratified, it's tough to describe. This is our recipe for disaster. Start by creating a foundation of a few inches worth of snow. Then, sprinkle liberally with wet snow, sleet and frozen rain, seasoning each layer with road grime. Then, increase temperatures to about 40° F for a couple days to allow the entire mass to melt slightly. Then, bring temperatures back down, as low as 0°, which should cause entire mixture to harden into a solid, brittle mass with a glassy sheen. Repeat several times.

This morning, this unholy layer cake got dumped on by another several inches of the wet sloppy stuff, of a consistency exactly like that of a 7-11 "Slurpee" drink. Around mid-day it started to rain. Tonight it should sleet some more, and then it'll all freeze solid again. The mess that results from all of that I can't even imagine--we're getting into a level of disarray with which I am simply not familiar.

Golf is a seasonal sport. Duh, right. While to most people this is an obvious, common sense fact, I'm just now learning it, the hard way, now that I'm the webmaster of an up-and-coming golf-oriented internet site. You see, the other day I was bemoaning a depressing scarcity of golf-related discussion online, both on this site and others. Snooping around the internet for some answers, I came across this handy website called "Google Trends". 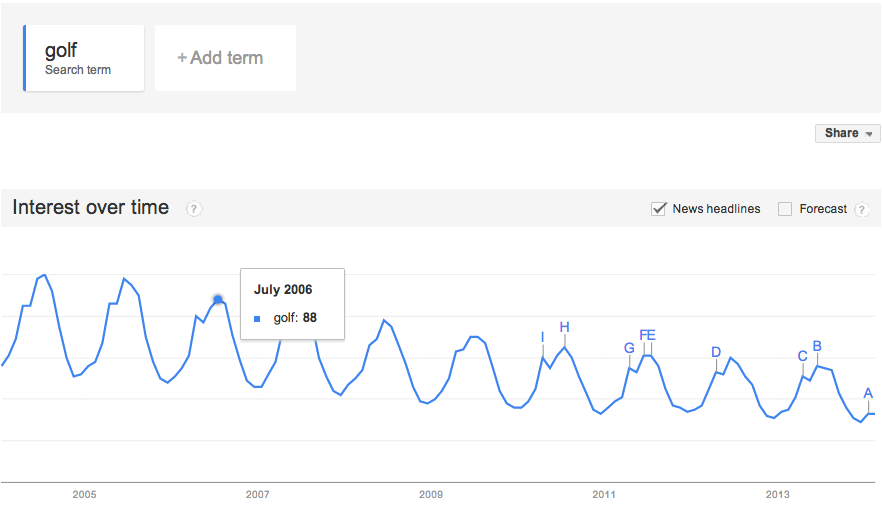 These graphs show you the amount of search activity associated with a given search term (in this case simply "golf") from some time in 2004 until now. The first thing you notice is the saw-tooth pattern; it characterizes just about every golf-related search term. Each peak corresponds precisely to July of that year, and every valley to January.

While this made me feel a shade better about the situation, I then noticed a larger and some would say disconcerting trend among most golf-related Internet queries. And when you are cooped up indoors, going on your third or fourth week without golf, what's a better consolation than to revel in someone else's misery?

Of course "golf" isn't exactly a useful term--who the hell types "golf" into the Google? So let's take a look at some more realistic searches and see if we can't get a pulse on the golf cosmos. 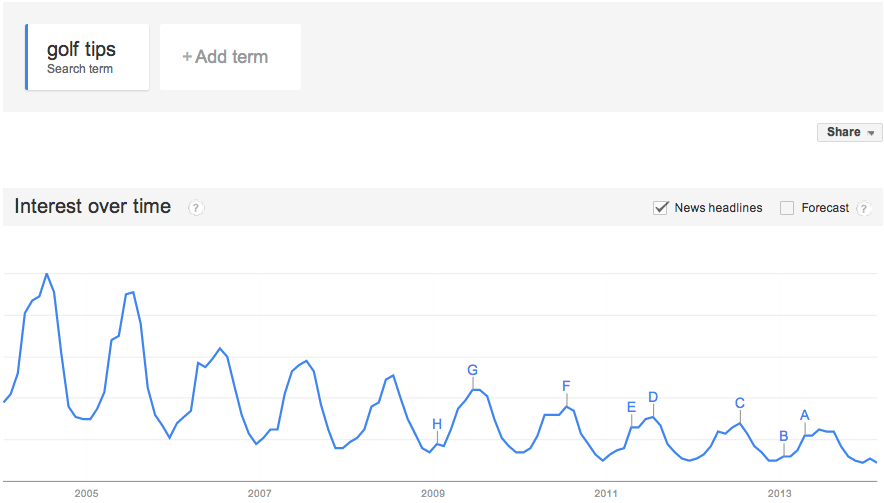 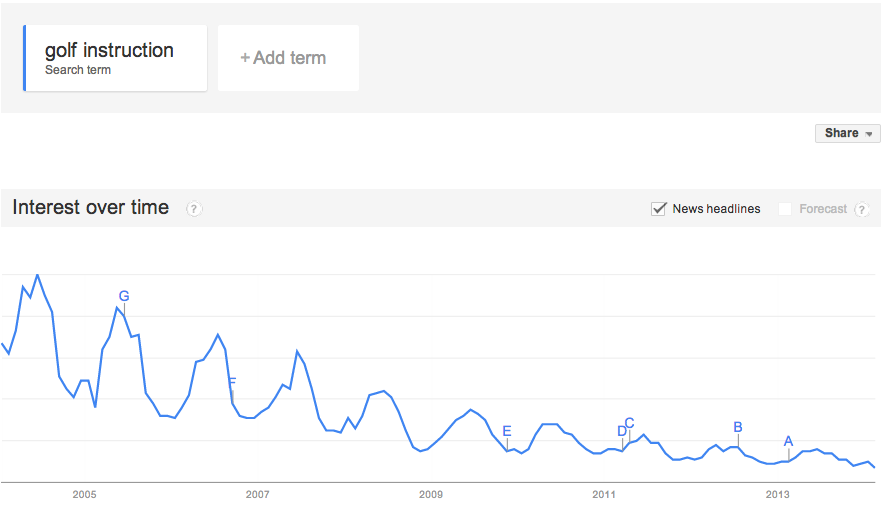 Proof positive--people are getting fed up with this stupid game. And once lessons and tips no longer avail us, what are we gonna do, where else can we turn? 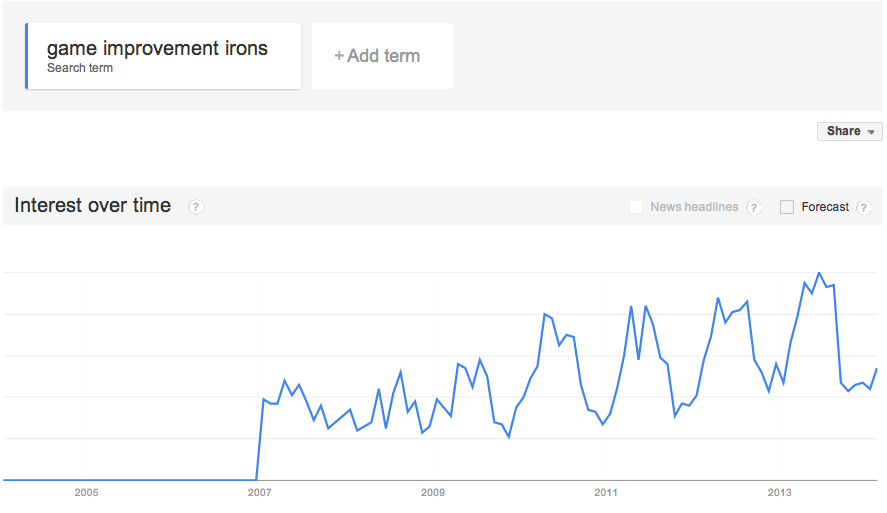 Equipment of course. Equipment that will make golf easier for us. 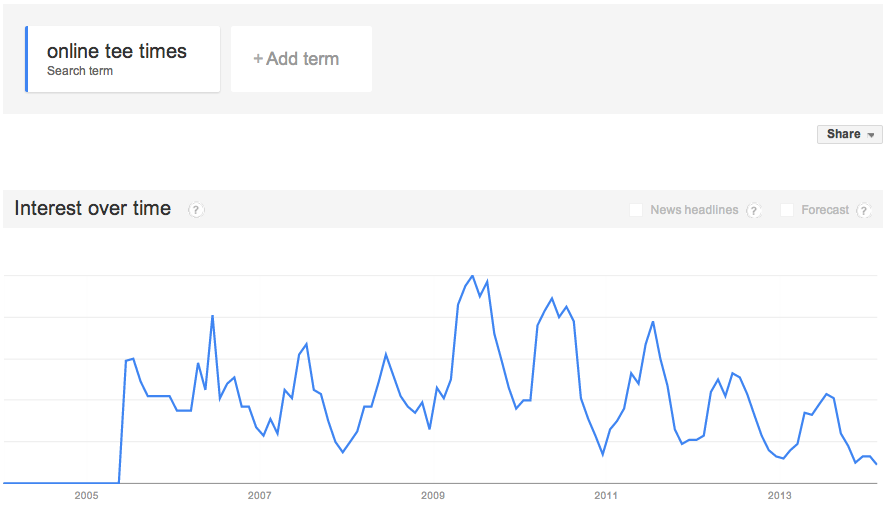 Interest in "online tee times" perked up around 2010 as old fogies started figuring out how to make reservations via websites and sites like Golfnow began aggressively marketing. But sure enough interest eventually waned, to the point where right about now there's maybe twelve people in the world that might Google "online tee times" in a given day. 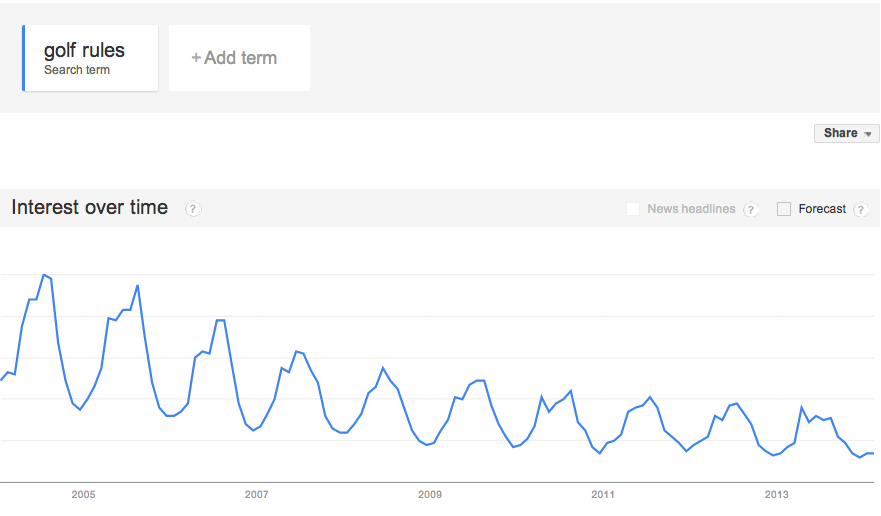 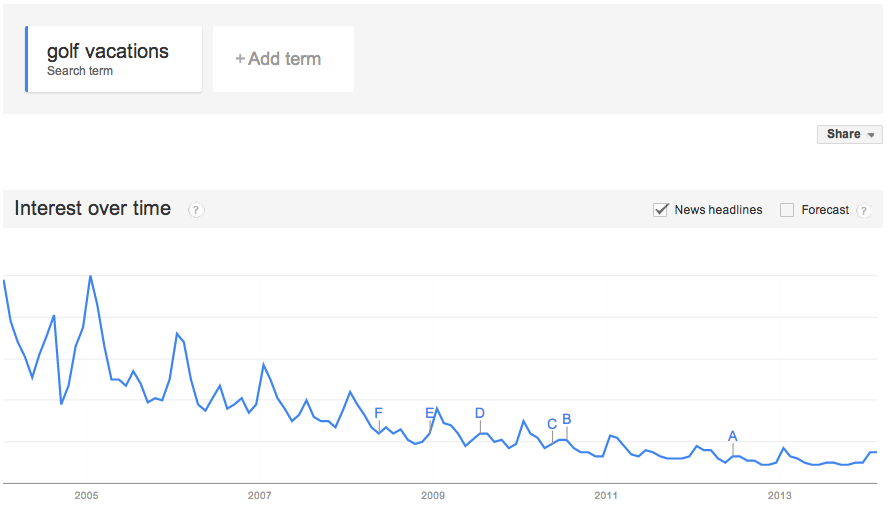 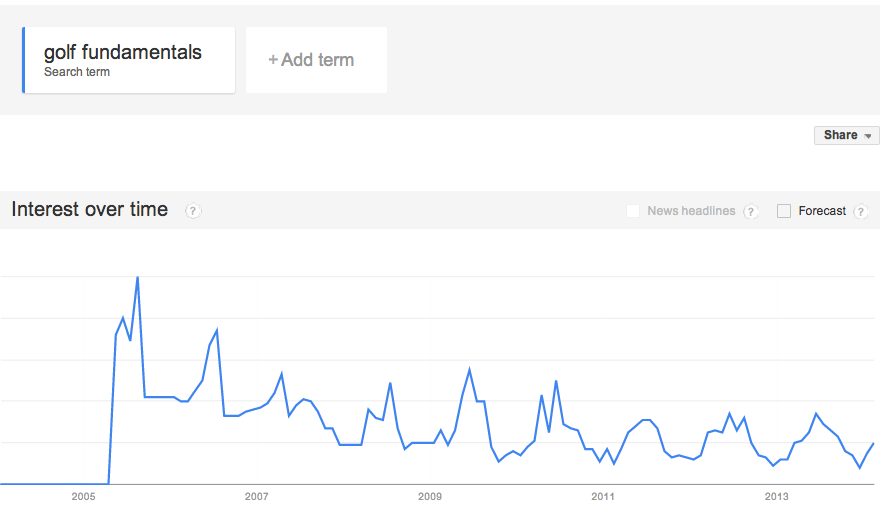 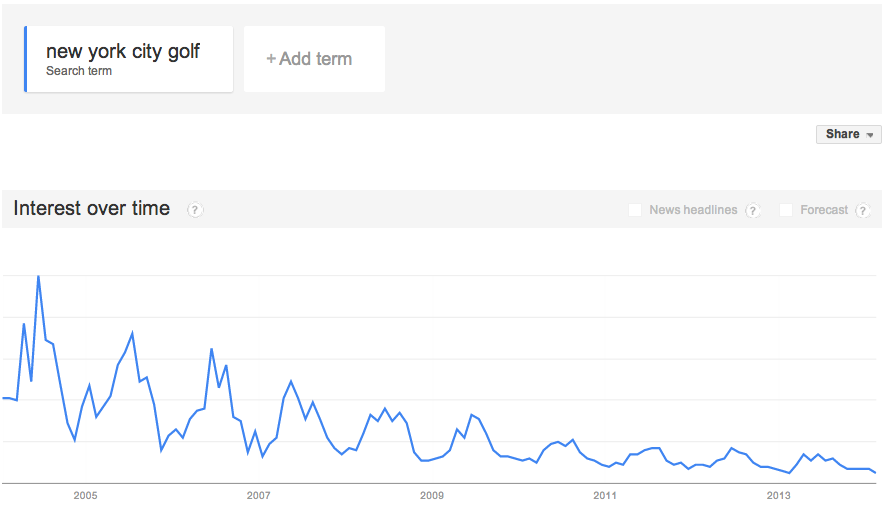 Everywhere else you look, the picture's pretty grim. The media and some of golf's high officials have been whining and crying about it for while, and now that I've seen the hard stats I can finally believe it: interest in golf is most definitely petering out. What does it all mean? If you're expecting some sort of poignant elegy on the decline of golf and the general erosion of character and love of sporting challenge among today's Americans, or some kind of flag-waving call to action...

Well don't look at me. If the dictionary defines the word golfer as 'one who partakes in the game of golf', well I can't even fairly say that includes me, can I? No, right now I am simply the webmaster of a golf-oriented internet site. Besides, quite frankly I couldn't care less right now. Golf is on the decline? Good--that just means fewer jackoffs on the course, and faster cheaper rounds. Why the hell not.
Posted by Legitimate Golf at 4:33 PM