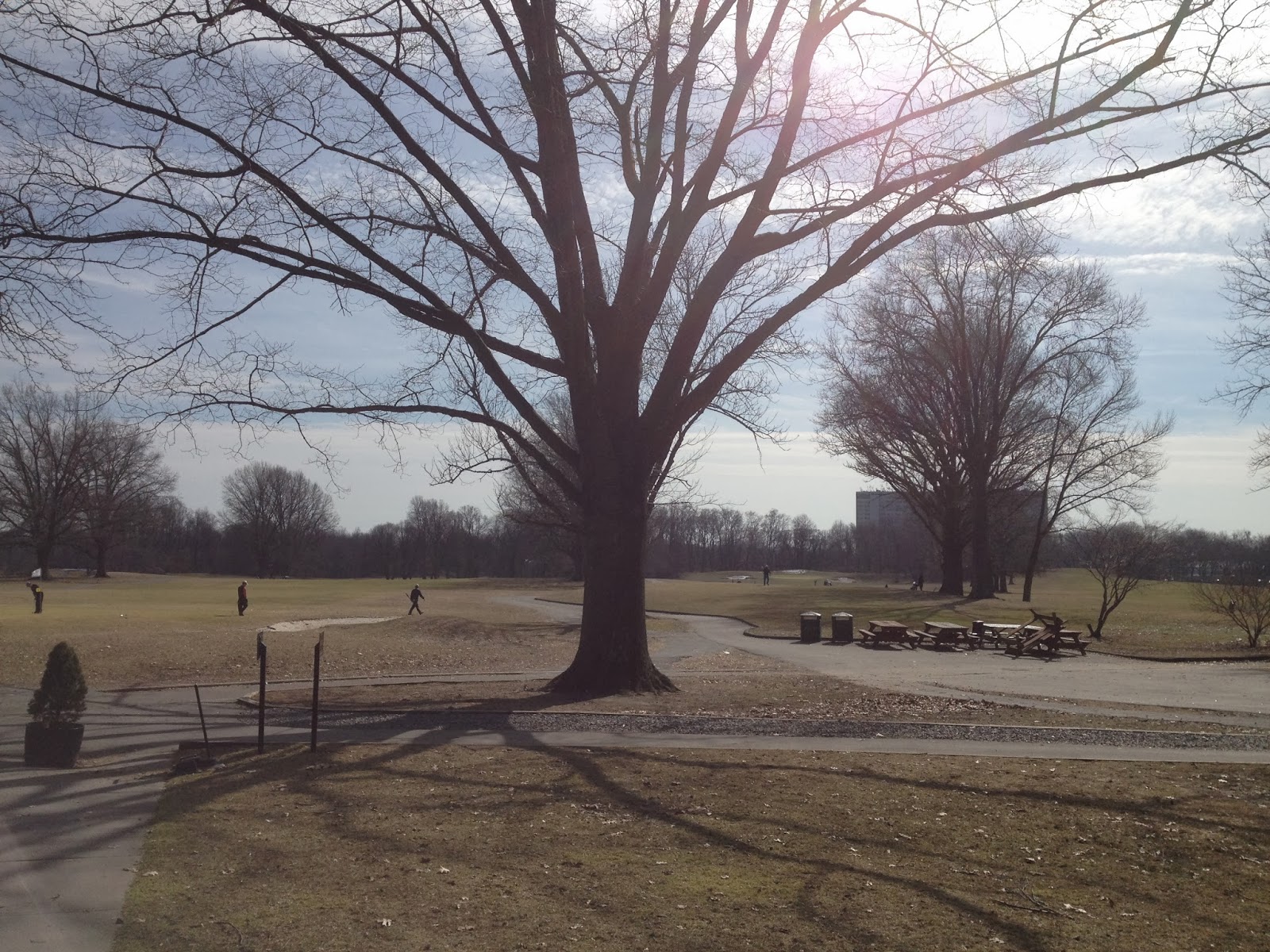 After seven weeks of daydreaming about playing golf the time has finally come to get real.

If the last post was a bunch of bellyaching about not knowing how to get back into the swing of recreational golf, then this latest outing was a reminder that I'm stupid, that nothing's really changed, and that it's gonna take more than a couple months' layoff to forget how to do any of this.

Still as I was getting ready to leave for the course I got a little bit flustered trying to pack up all the gear and collect all the myriad bits and pieces needed for a ghetto golf outing, and to figure out a train/bus itinerary. In the swing of the regular season, sorting out all this stuff becomes rote, but to the unfamiliar it can seem like a huge headache. Normal people who drive to the golf course have the luxury of throwing a bunch of stuff in the car just in case. Not the car-less NYC golfer, who has to make sure every last thing he needs in a round of golf, is squared away in the bag. 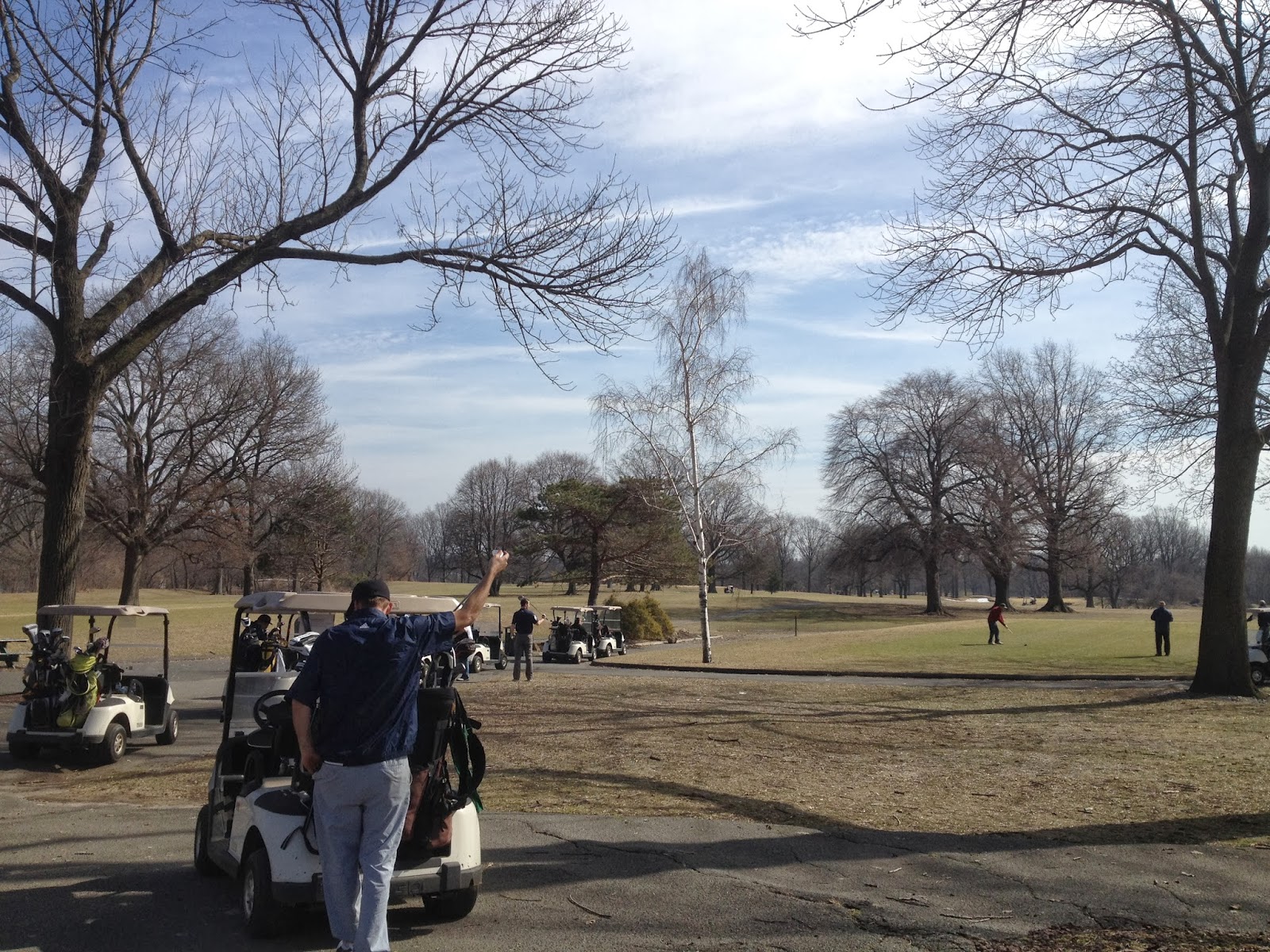 The plan was to show up by 2:00, which should've afforded plenty of daylight to finish 18. But when I got there, the place was jam-packed. By the time I paid my fee and got in the queue there was a backup of four groups waiting on the first tee. The wait wasn't too bad though, since I was so glad to just be at the course again. The scent from all the awakening trees and flora really was great to take in after being a shut-in for the previous seven weeks.

When it was finally my turn to tee off I smother hooked a driver into a bad spot next to a tree trunk. Couple of missed greens and skanky chips later I was two over through two, which didn't seem too bad. 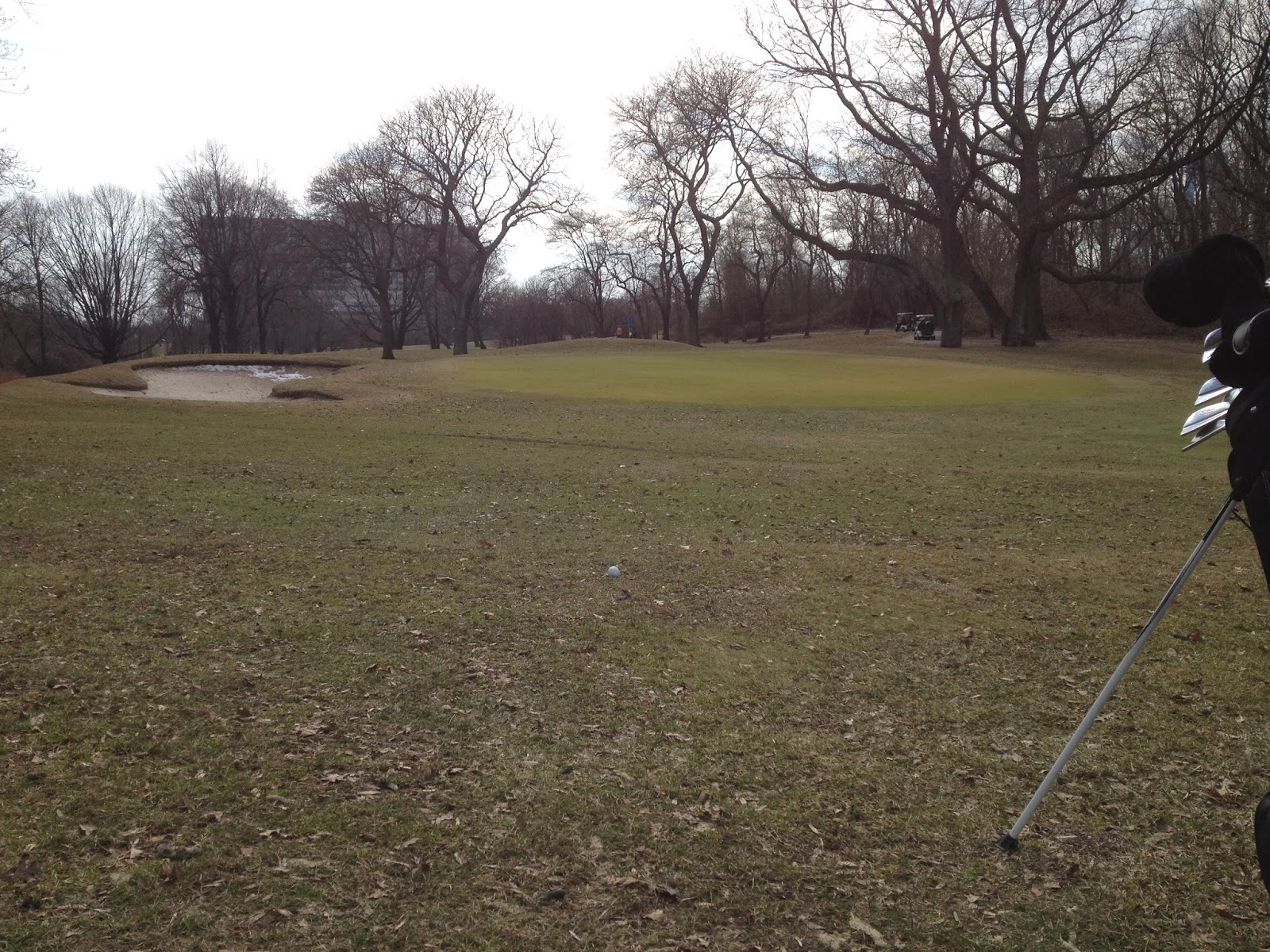 I was in a foursome with two duffers and one good player, who wore earphones the whole time. After a few holes he walked over, complimented my swing and asked if I'd test out one of his brand new Callaway Apex irons, which he said were feeling a little off to him. I don't like messing around with other people's clubs, especially during a round, but I agreed do it at some point, hoping he'd forget all about it.

On the par 3 8th hole I struck a solid 6-iron that flew onto the front portion of the green--a pretty good shot. After everyone else had teed off the guy asked me again about hitting one of the irons. I asked for a 6 naturally. The club was pristine, barely out of its shrinkwrap. I tried to put the same swing on it; I nutted it and the ball exploded off the face. It looked great in the air and then completely sailed over the green, carrying at least fifteen yards farther than my first shot.

Well even though the guy had just bladed his own tee ball, seeing me take the Pepsi challenge with his iron and seeing how ass-poundingly long the Callaways were seemed to satisfy him. Soon as the ball had touched down in the woods behind the green he started joking around offering to sell me the set--at a marked up price, because hey, "if you can get fifteen more yards just like that, why wouldn't you?"

I didn't care much; I'm not falling for that shit. Anyone with half a brain knows that irons in 2014 aren't just engineered for max distance power, the lofts are jacked up beyond belief so they can fool the daft consumer into thinking Whoa, these irons are really fuckin' long! Don't believe me, think it's just stubborn old people poo-poo'ing anything new? Look at these specs, taken directly from the respective manufacturer's websites. LOOK AT THEM.

The explosive feel of the impact was undeniable I will give it that. But comparing the two shots, the solid-metal thud of my old-school style iron is just better. It's reassuring. It imparts a feeling of precision and consistency, not wanton power. In a game where distance control is a core value, an iron with a trampoline for a face cannot be trusted. There's a place in golf for clubs with hot faces but it's not in the mid irons, and sure as hell not in the short ones.

Of course it rankled me that I ended up acting as a promotional tool for stupid distance irons. The whole thing played out like the kind of dumb tv commercial that sends me diving for the mute button, everyone ooh and aah'ing at my instantaneous 15-yard gain. You know what, those two duffers in our group, they're probably already got a new set of Apex irons in mind. OEM's are full of shit. Who is worse, the shysters who come up with this stuff or the goons who fall for it.

Anyways, the two duffers were really impressed with how the earphones guy and I were playing and inevitably asked about handicap indexes. Two, he replied, and then looked over at me: "That's about what you are, right?" I cringed and said that I ended last season at 11.0. They all sort of scoffed; I tried to explain that I'd played a lot of unfamiliar courses last year and didn't score all that well. Whatever, they probably all thought that I'm a sandbagger, not a guy who simply keeps honest scores. The world is broken. Sad. 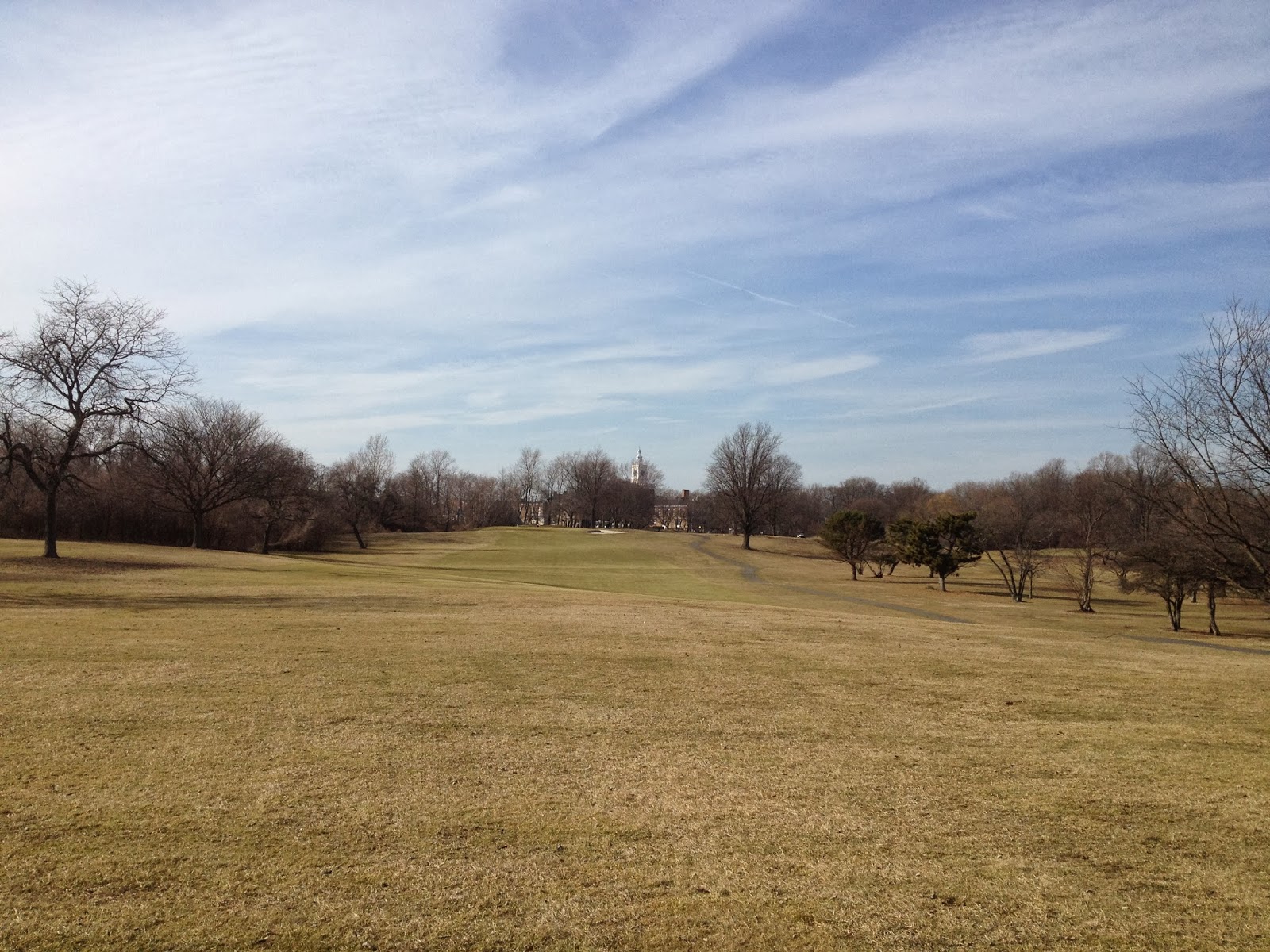 The weather was tremendous--I had on just a t-shirt and a sweater but got warm enough that I actually sought out some shade at times. As a human I appreciated it; as a golfer, I wished it was at least 20 degrees colder. The pace of play was brutal, about 2:45 for nine holes. At this rate there'd be no finishing 18 so I made the executive decision to just leave at the turn (even though I was really loving this whole golf thing). Walking up to my last green I figured, okay take my two-putt par and we'll leave here with a nice 38, kick off the 2014 season in nice fashion. Only I poured in the twenty footer for my third birdie of the afternoon. 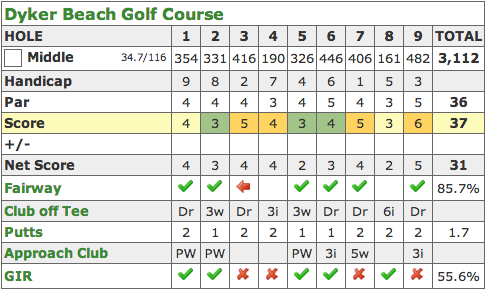 Of course I wanted more, but I was satisfied to leave on that high note. The old me would've become rabid at that point, and probably gone off on a desperate quest for more birdies, and to somehow finish the back nine within the 1:15 until sundown, hoping to chase after a personal best score, or at least close to it. But no, apparently I've changed; maturity is setting in. Yes, there'll be more opportunities to shoot low scores. Besides I hadn't really dealt with this kind of slow play in a long time and it wore me out mentally. 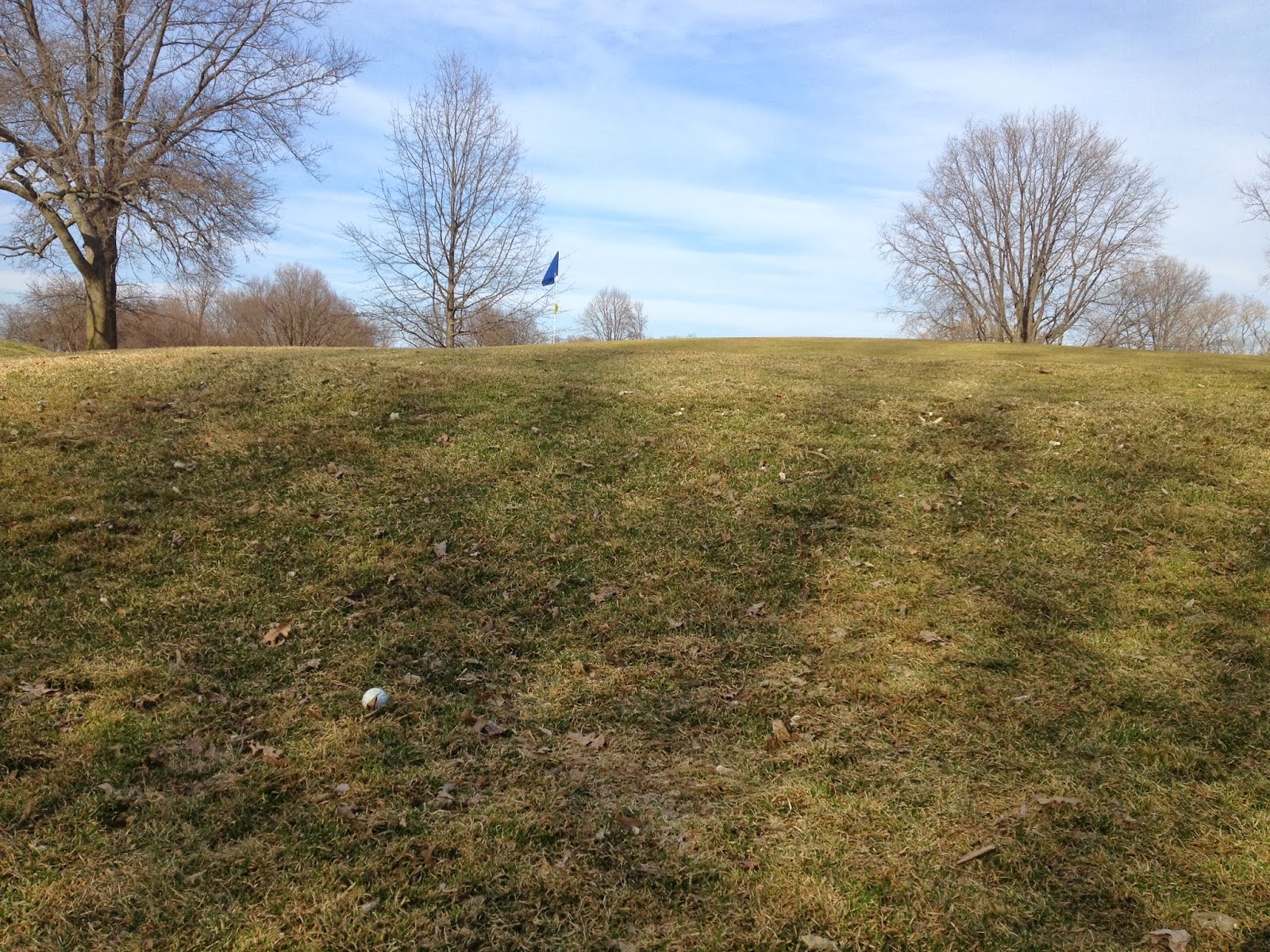 Before I left, 2-handicap guy asked me if I'd be interested in playing some Metropolitan Golf Association tournaments with him, specifically two-ball events, citing my "consistent" play and that we could probably do well together. I don't think I'll actually end up doing so, but it was good to hear.
Posted by Legitimate Golf at 11:13 AM