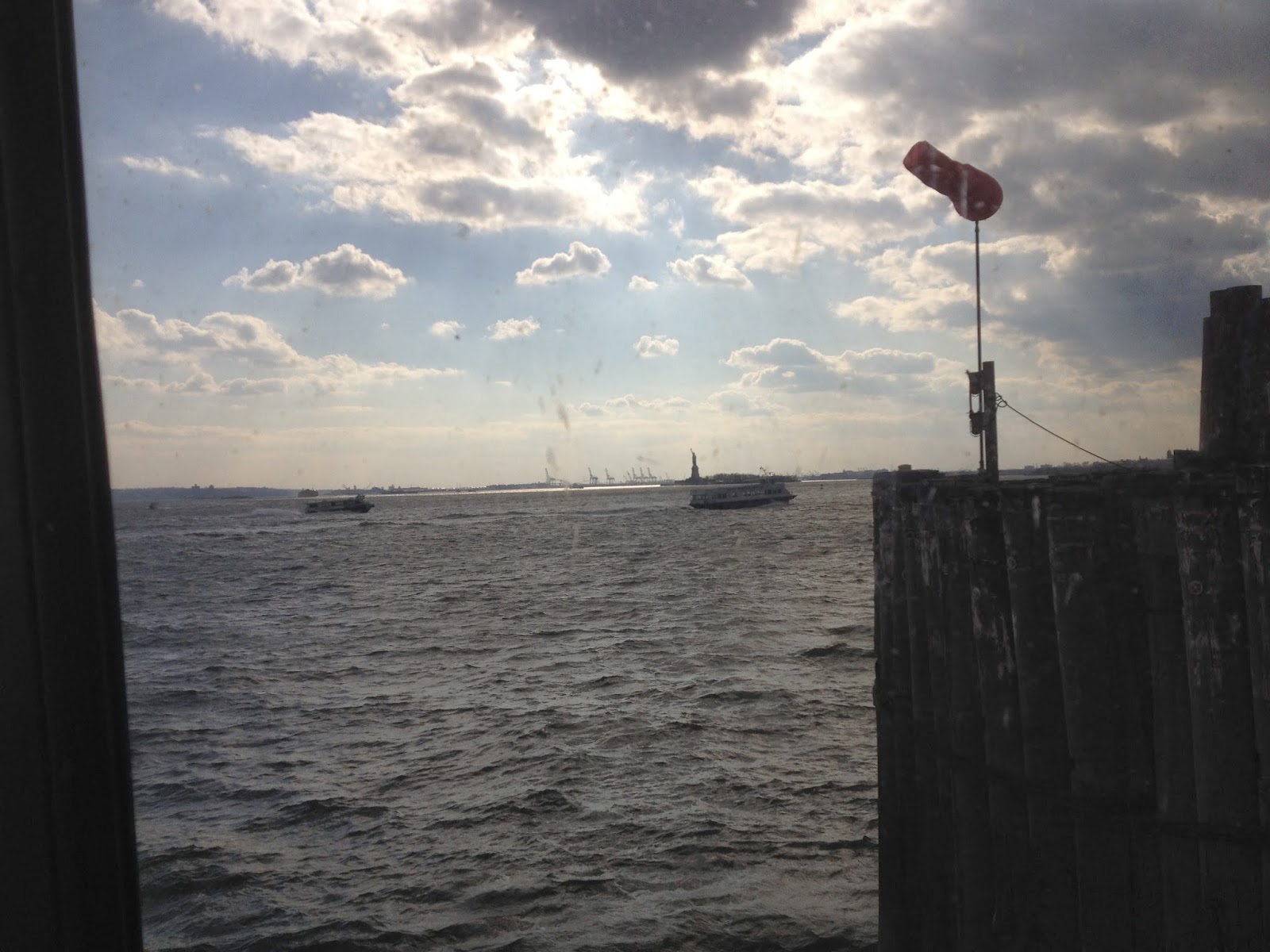 We are officially back at it now. Picking up where I left off late last year, scoring those cheap tee-time deals over on Staten Island. Two of them this week, one at the ass end of winter and one on the first day of spring.


By now I've realized that the 25-minute ferry ride is a pretty decent time. Just find a quiet area and you can have some nice time to yourself, relax, have a snack, surf the web or even be productive, thanks to the miracle of cloud computing technology. 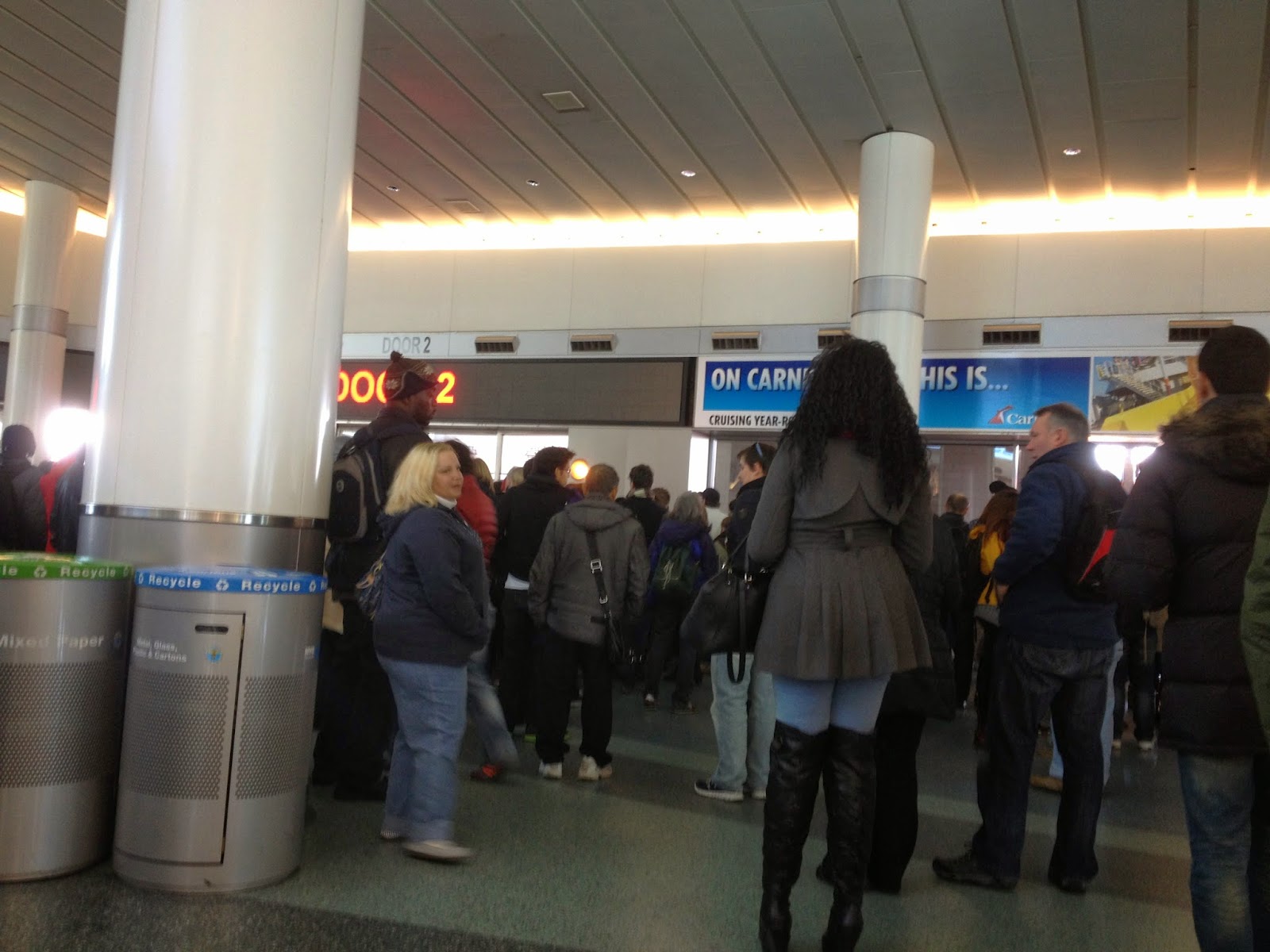 At the Manhattan ferry terminal, I joined the queue and set down my bag and I was immediately set upon by the short blond woman above and her male companion, a couple of NY natives (and not in a good way). "Isn't it cold to play golf?" No, not at all. "Is it true what they say, once you start playing golf, you can't stop?" Yes, that's very true. They were talking real loud, kind of making a scene. The woman sidles up and starts fondling the 8-iron. "Is it true," she asks in this soft whiny voice with a heavy Staten Island accent, "that Tiger Woods beat up his wife with the 8-iron? No! I mean did his wife beat him up..." I tried to cut her off insisting I had no idea about any of that, because frankly, I don't.

Then she said in that little voice, "Hey, you wanna hear a golf joke?" No. "Oh well, now ya being mean." Oh alright, fine. She told a joke; I didn't listen, but I nodded at the end. "You wanna hear some more jokes?" I shook my head and stared into my phone. "Oh alright I can see you're busy with your own thing there." Thank god, the doors opened and it was time to board the boat. 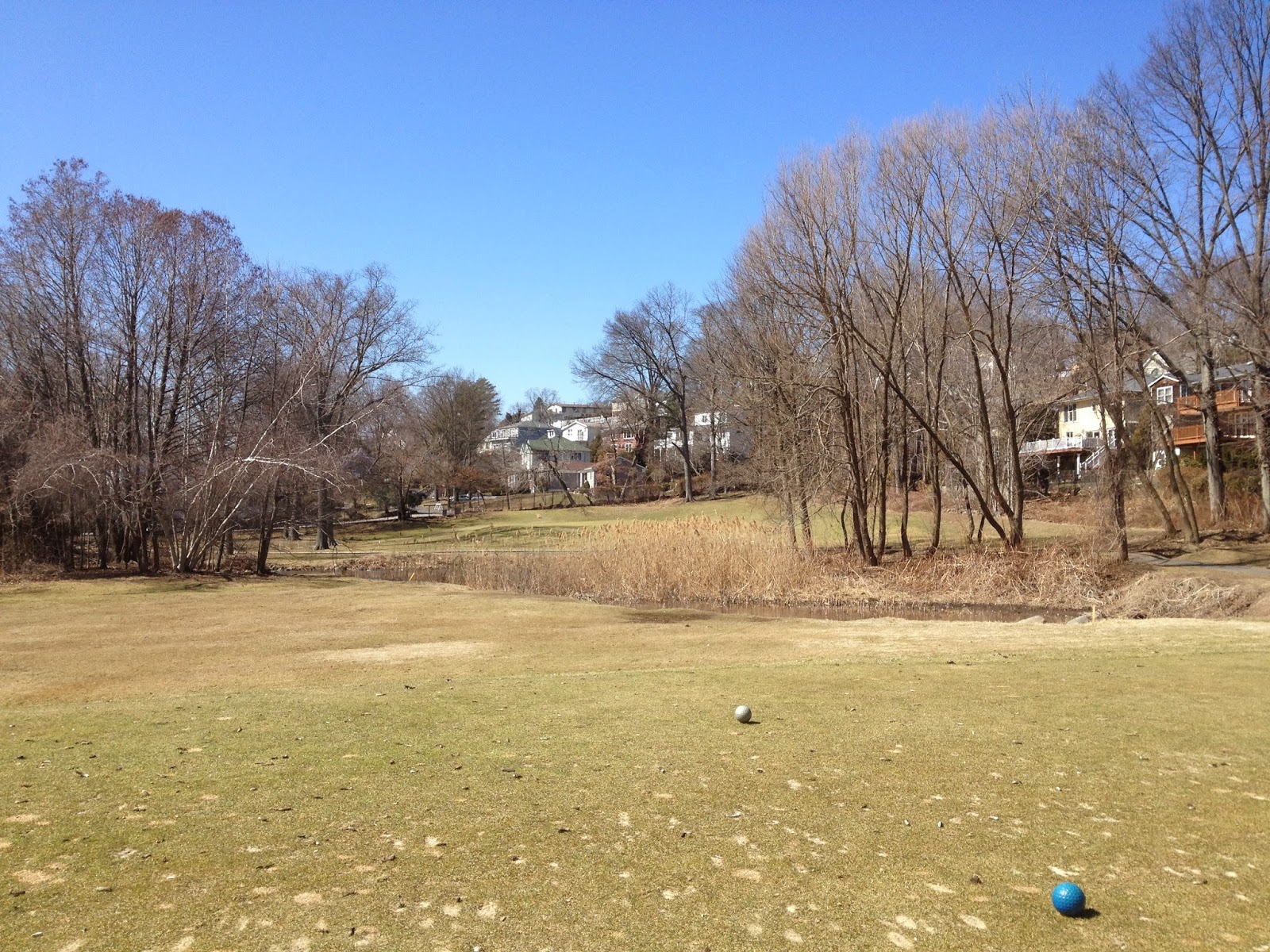 The turf was yellow of course, but as always I was surprised after a long snow to see the grass still there, alive and mostly unharmed. 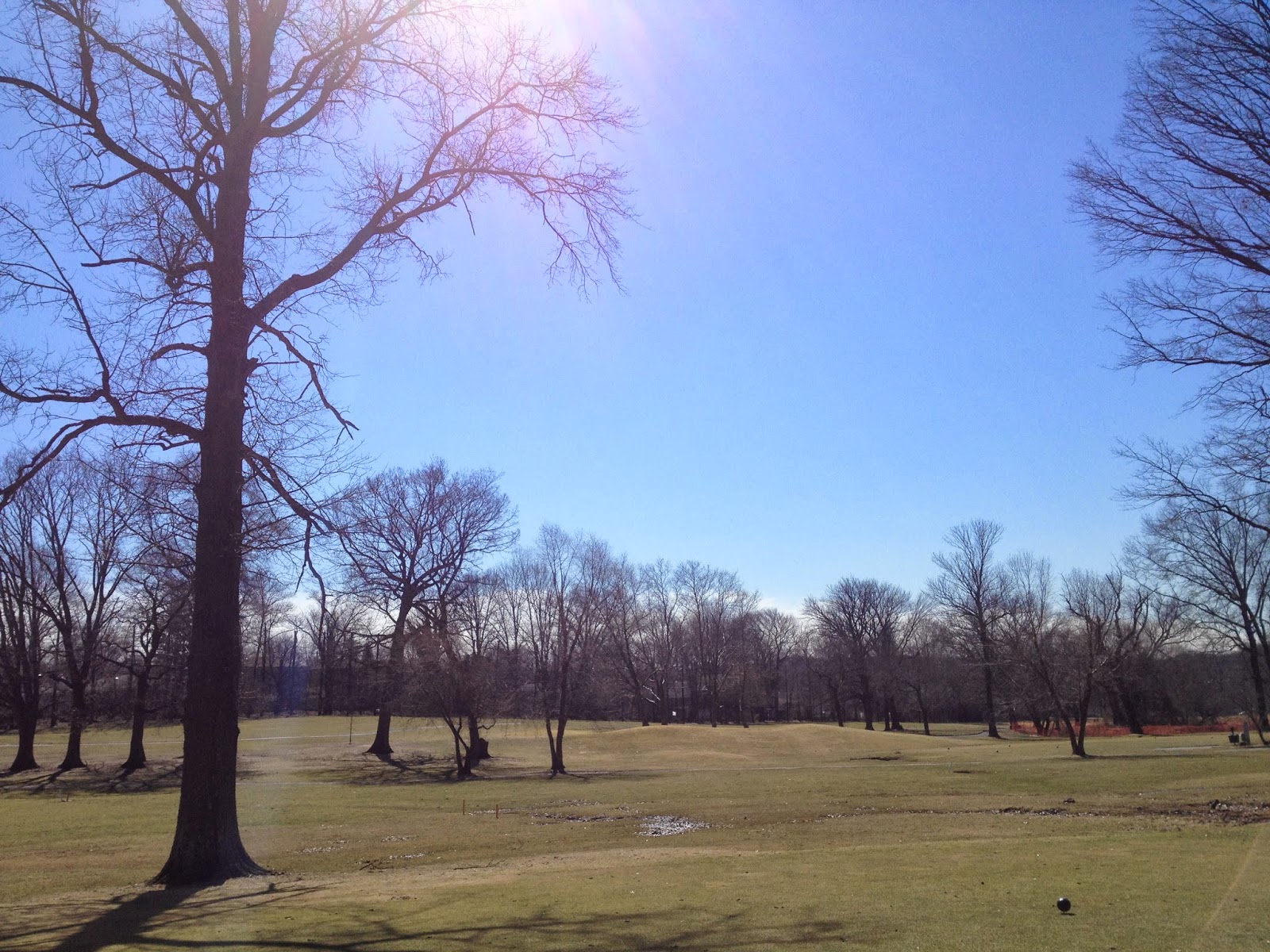 This is a photo of a perfect golf moment for me. It's in the low 40s with some breeze, but the course is empty, everywhere I look. I've made a couple of pars to begin the round, and looking all around me it appears that, no matter what else happens, I'll be finished in a couple of hours. To me that represents a kind of peak experience in this game. Sure, it might be nice to play a Pebble Beach or St. Andrews or whatever, but there is nothing quite like a brisk, get-in-get-out full golf experience that fits right into your day, rather than eating it all up. It is sublime. 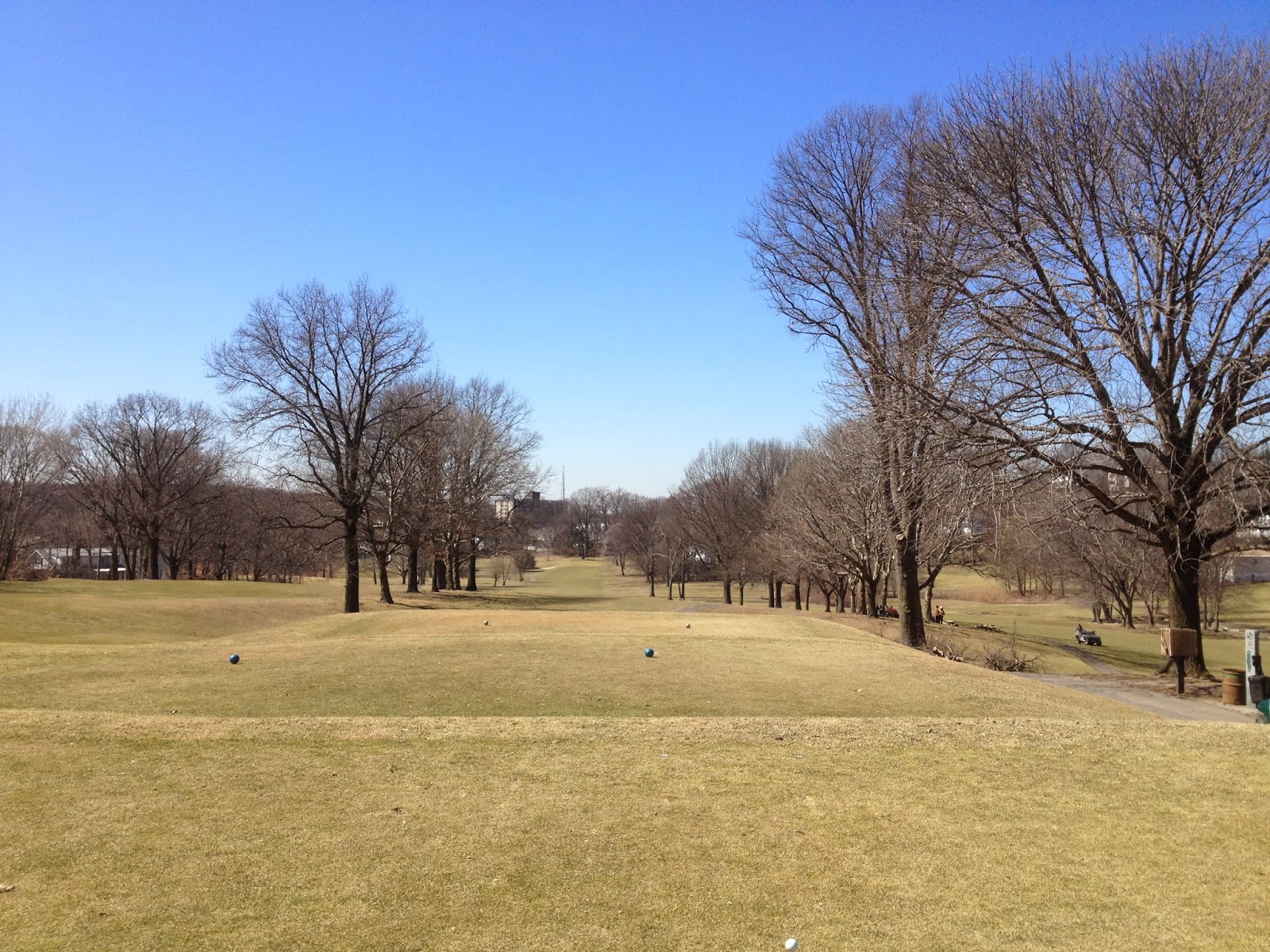 I do like this course by now. It's a little short, and the slope number is suspiciously low, but it has plenty of challenge. Variety, too. Here's the par 5 13th from the tee, a really long, really straight and somewhat intimidating hole. 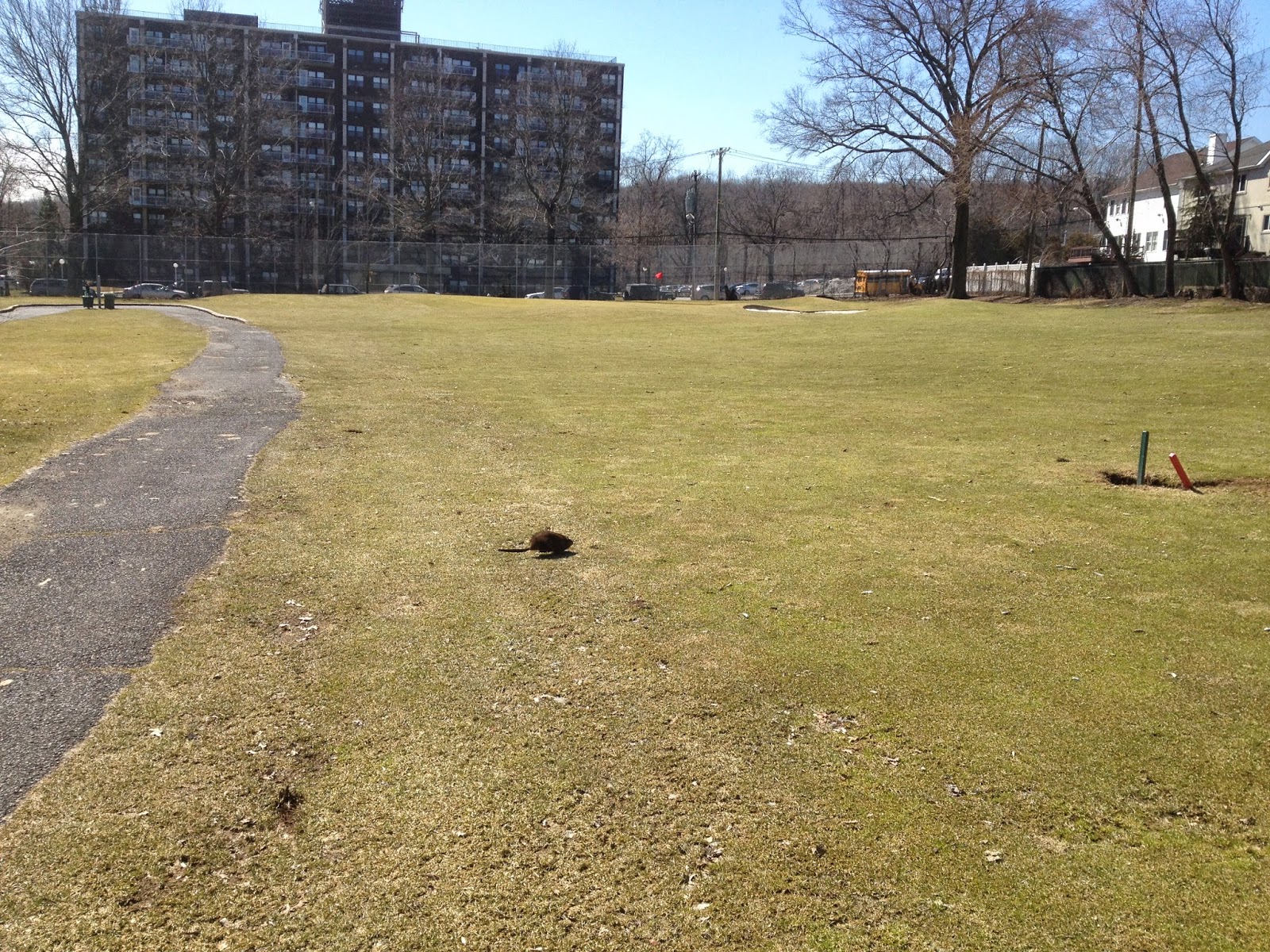 On the 14th fairway, I encountered some kind of mole-man creature. 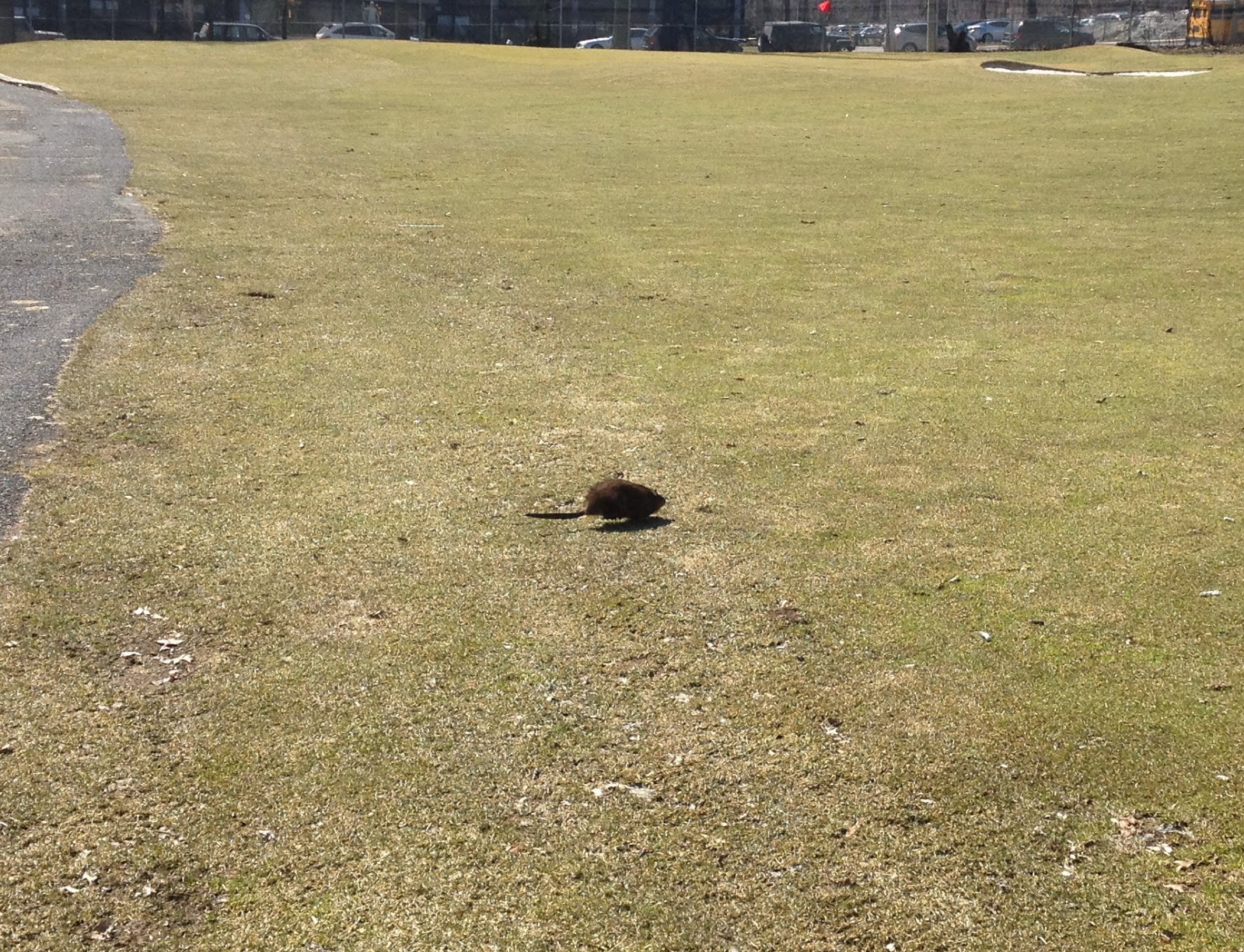 Wait! I want to get a closer look at you! He didn't care. He ran straight for what else? A mysterious hole in the ground. 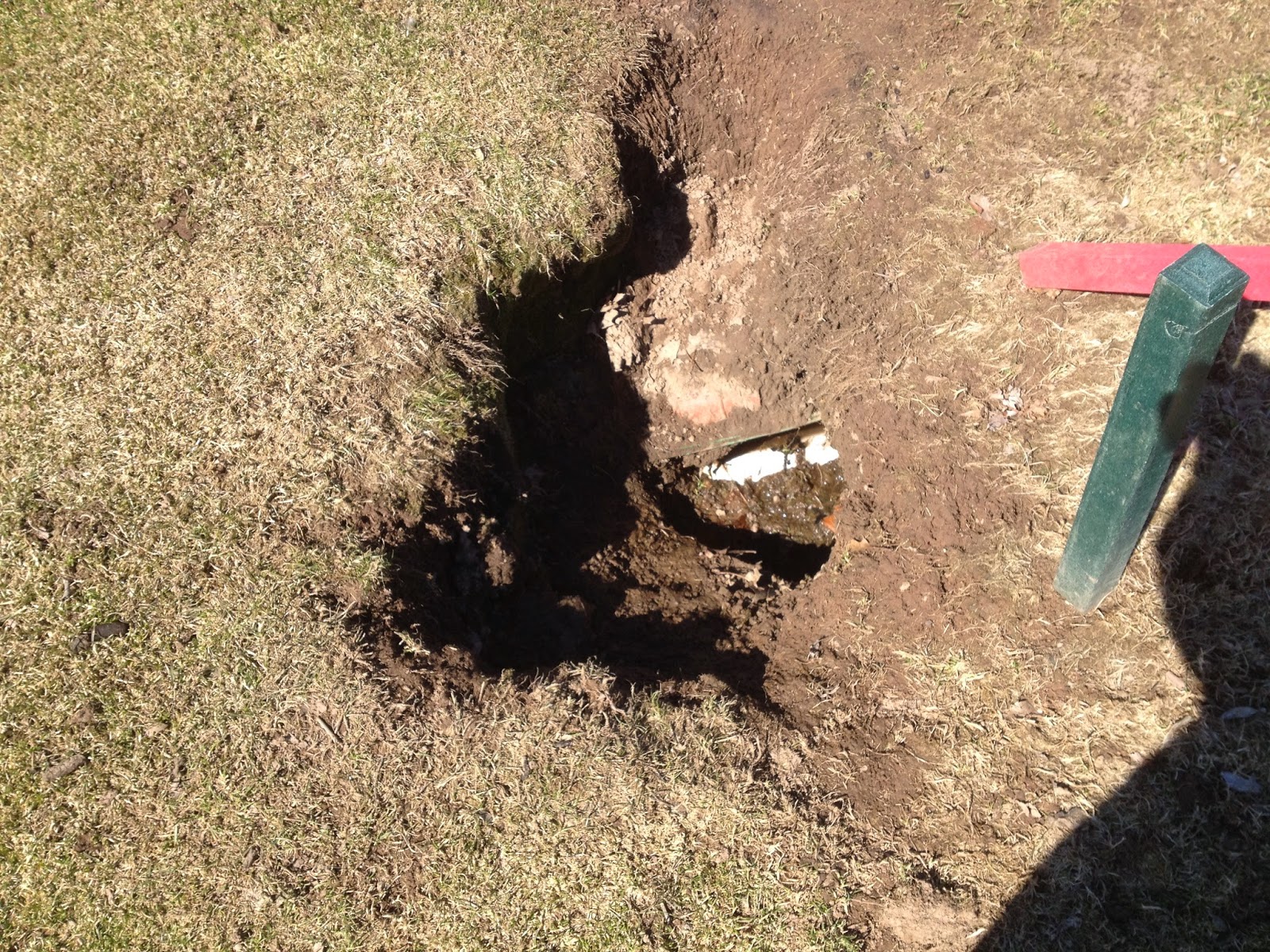 Whatever it was, I hadn't seen anything quite like it. It was a mole, I think? 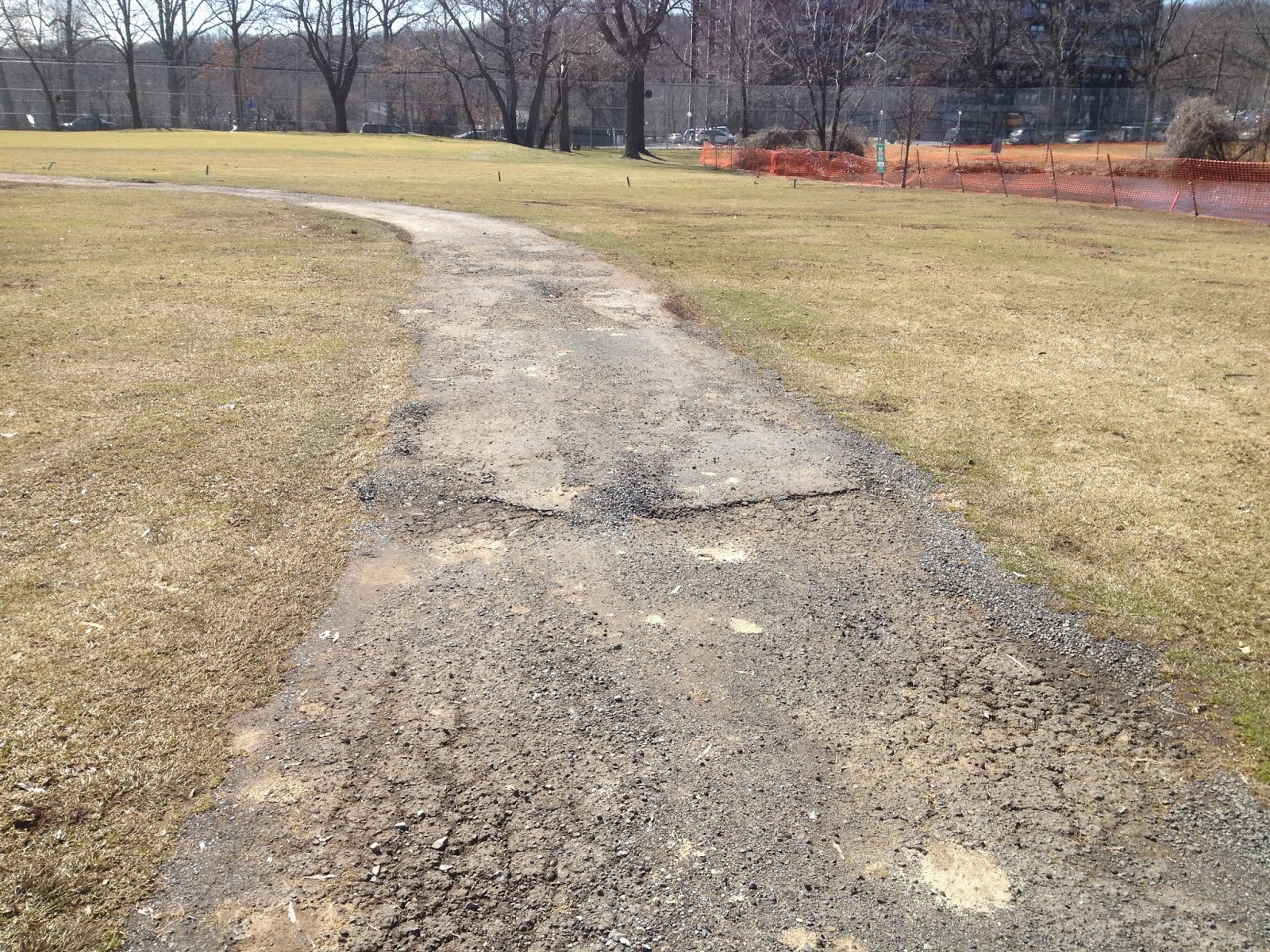 With cart paths like this, who needs cart paths? The club chatter was stomach-churning, even at slow speeds. I'm considering from now on leaving the free cart key on the table and just hoofing it. All this jostling around, it's starting to piss me off. 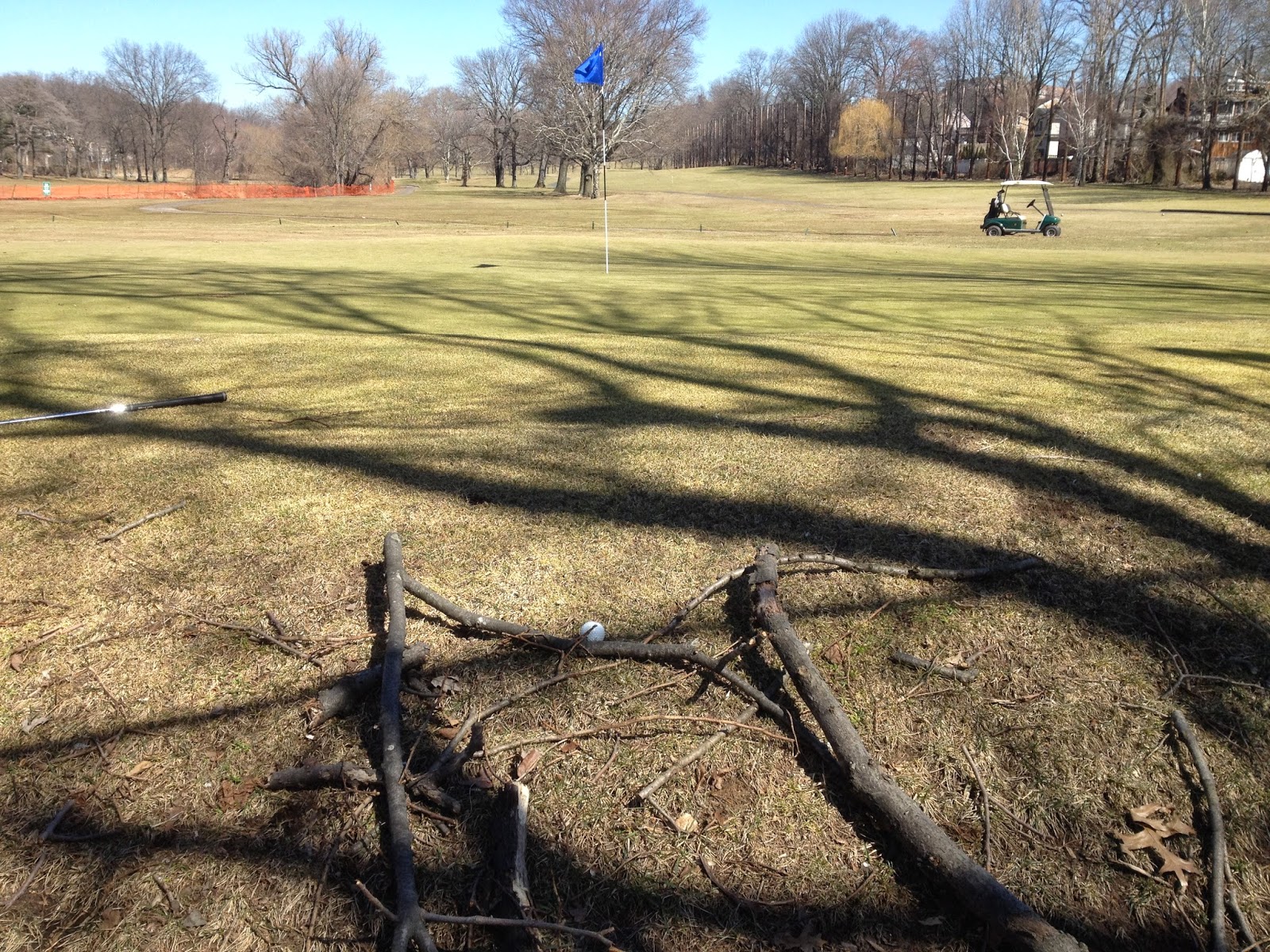 Yes, I played this as it lay. I skimmed a putter over the branch and topped it eight feet past the hole. 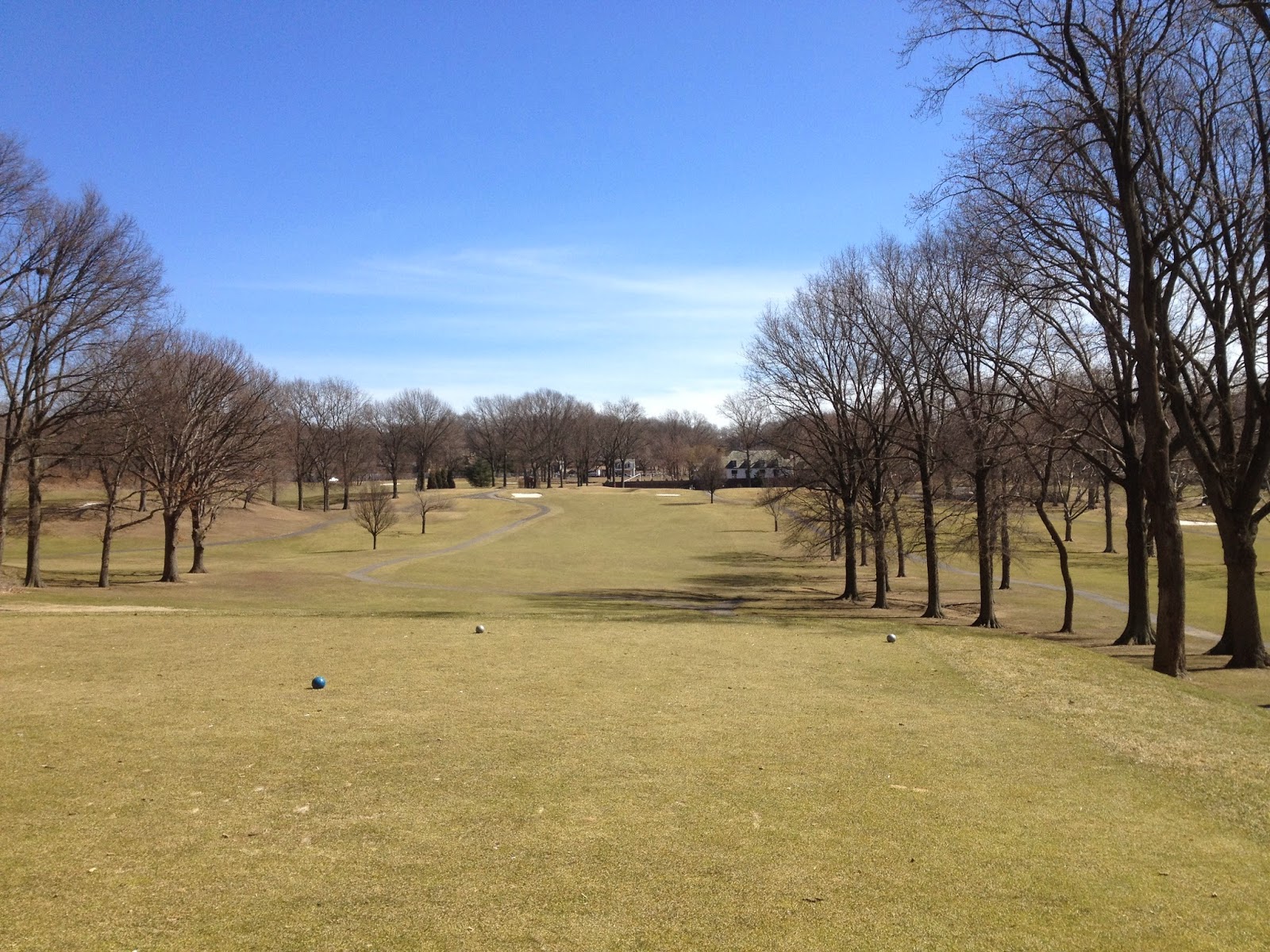 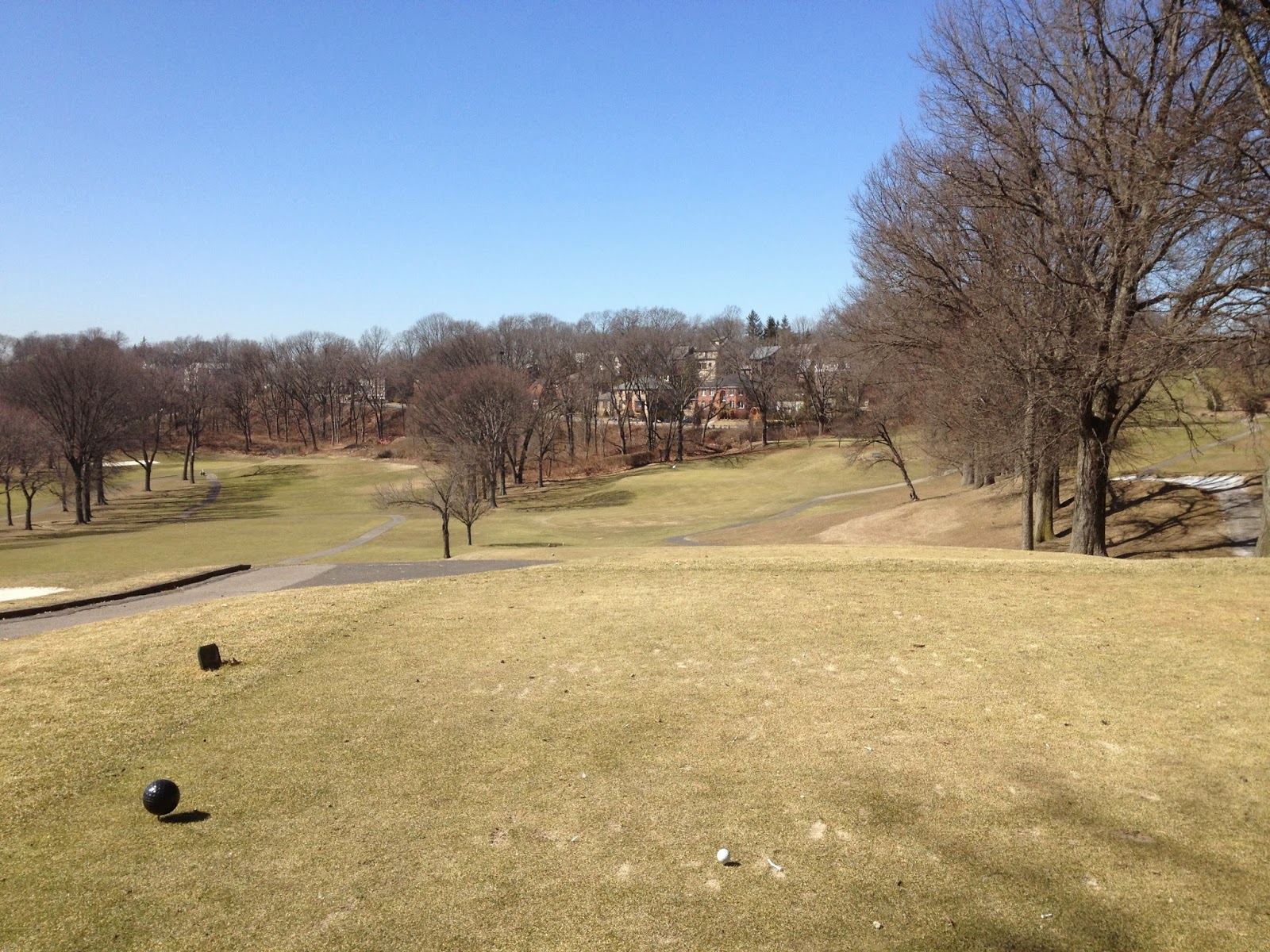 Massively long par 3 3rd. Whatever club I hit here, it's not quite enough.

As I said the round started in perfect happiness. But I started to get worn out. The wind kind of chapped my hide and my attitude went south. Man, I need to build up some mental fortitude again, I guess. Apathetic play in some tough conditions yielded a 91. 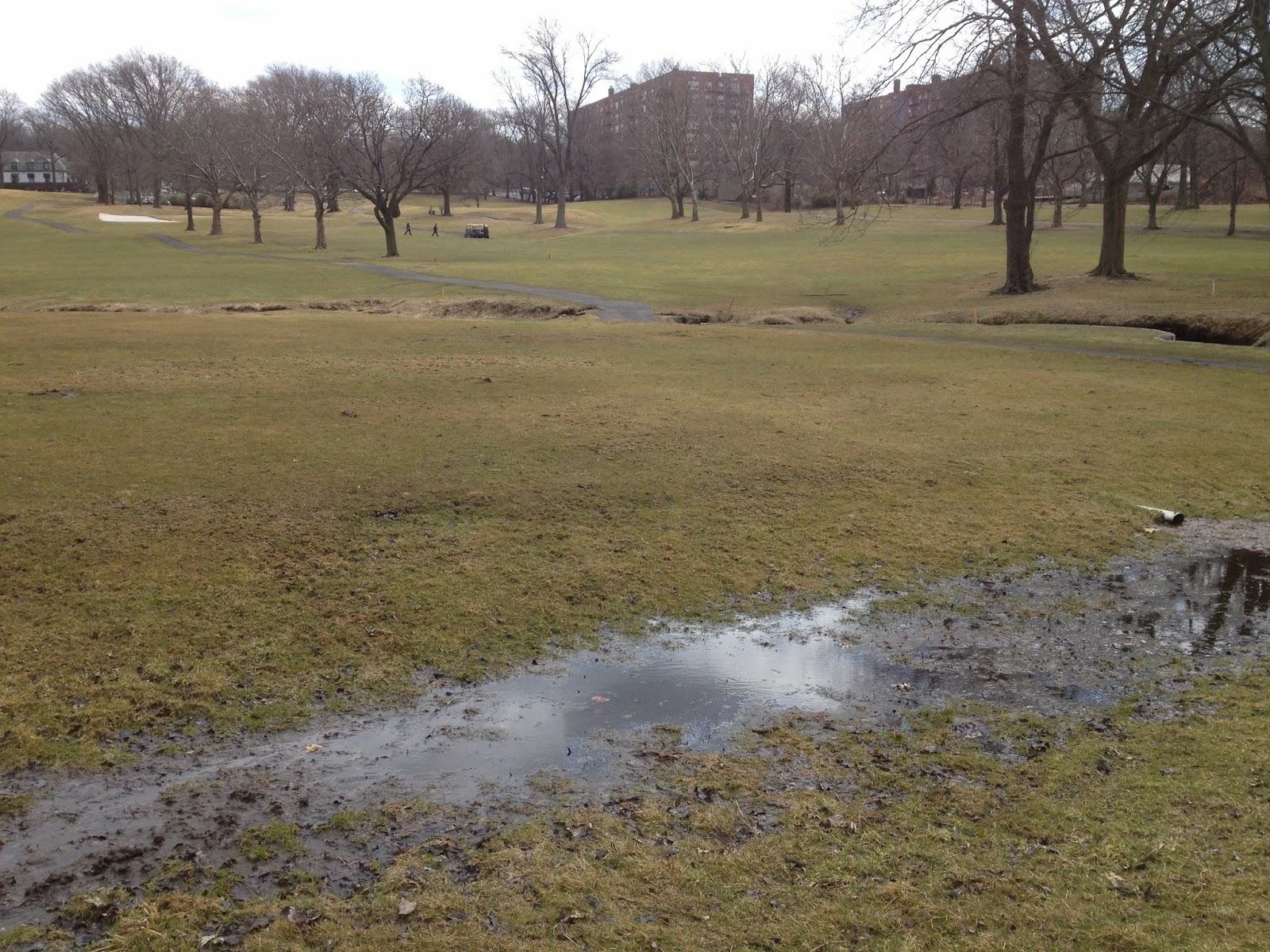 After a big rain and a few days later I came back, lured in by the same cheap tee-time deal. This time, the whole place was soaking wet. I was determined to shoot a better score, and exercise some better mental togetherness. 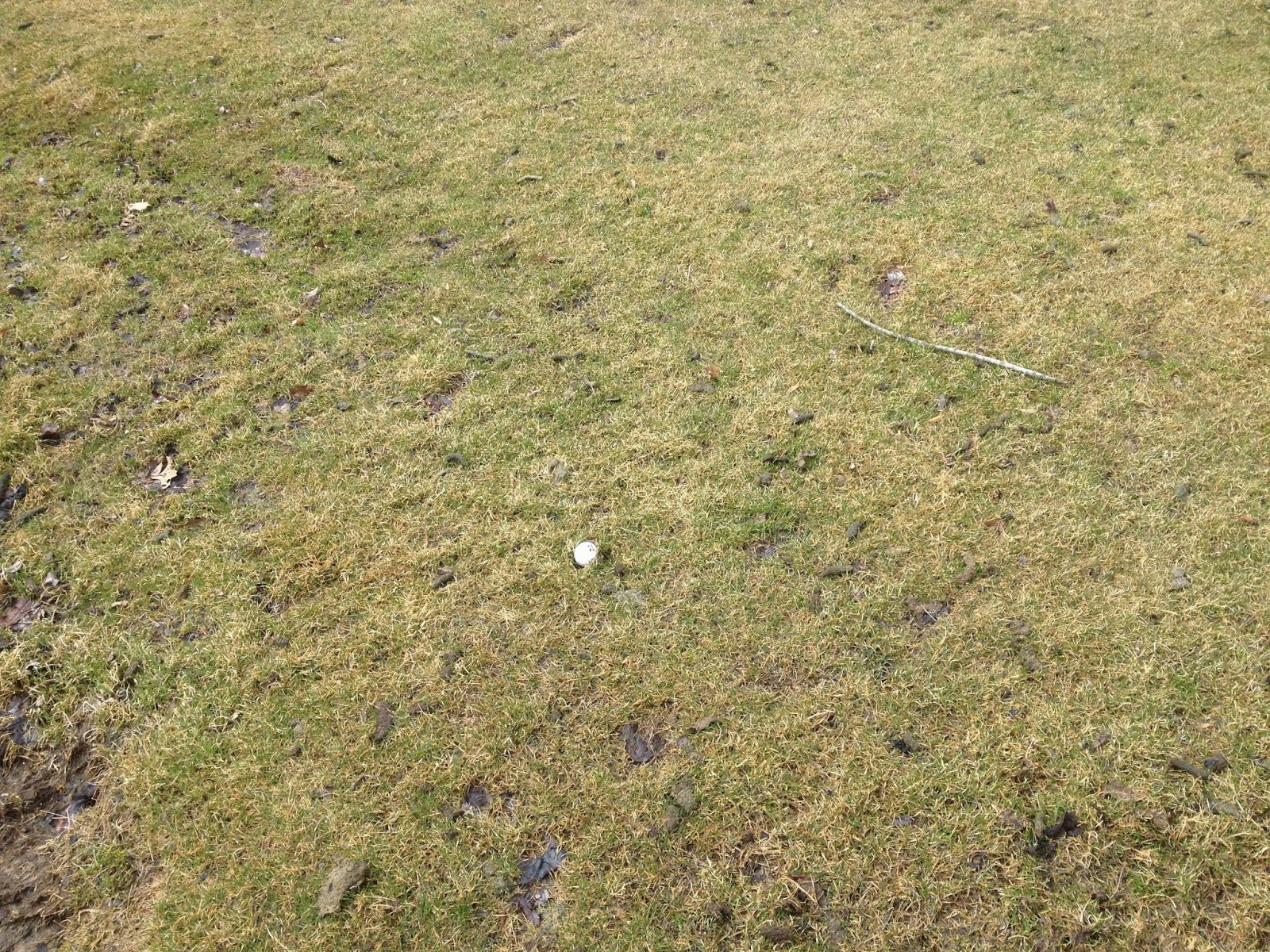 Plugged balls were the norm today. 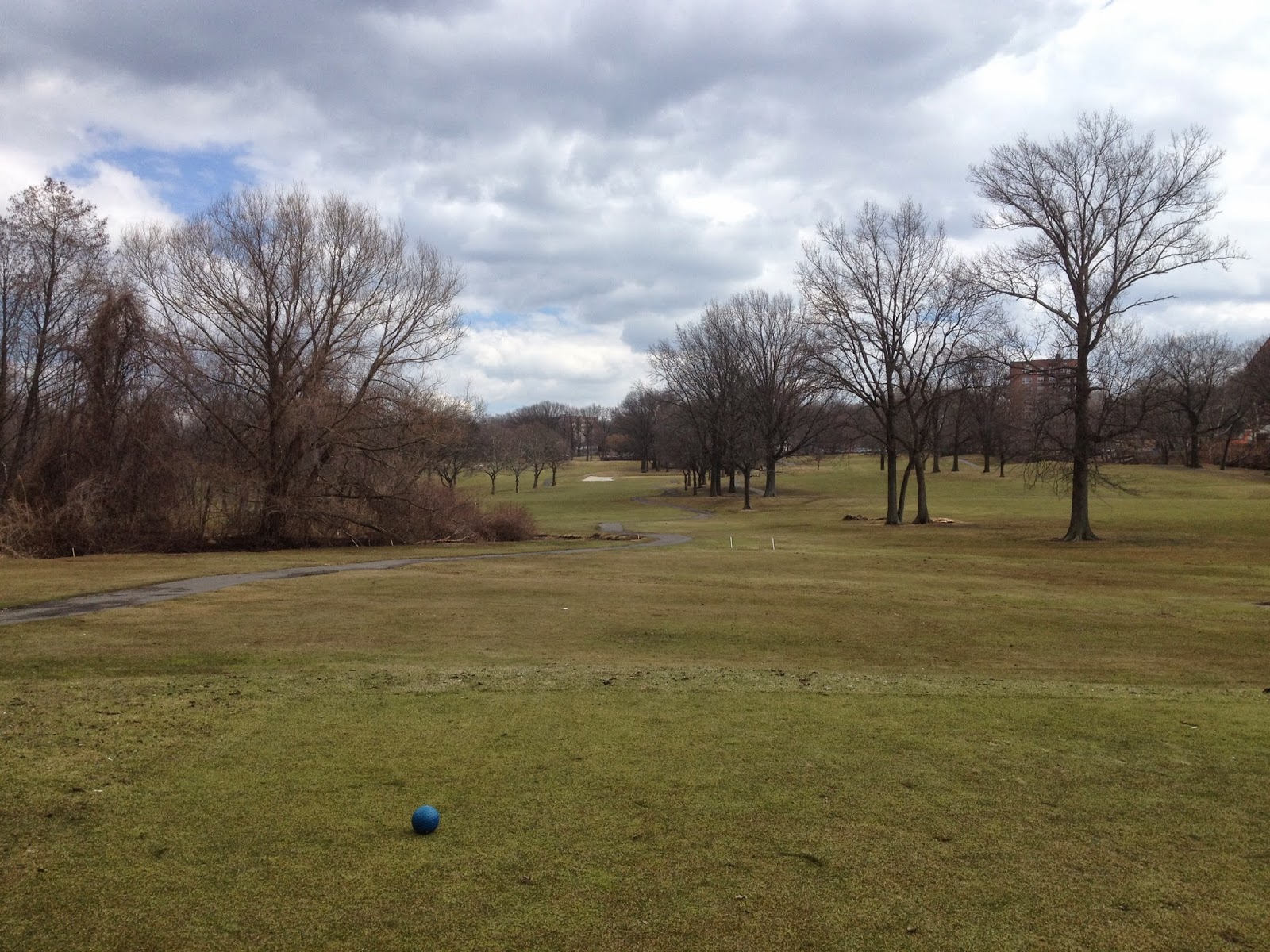 Par 4 12th, a pretty big uphill hole which I was psyched to birdie today with driver and 6-iron to about ten feet. 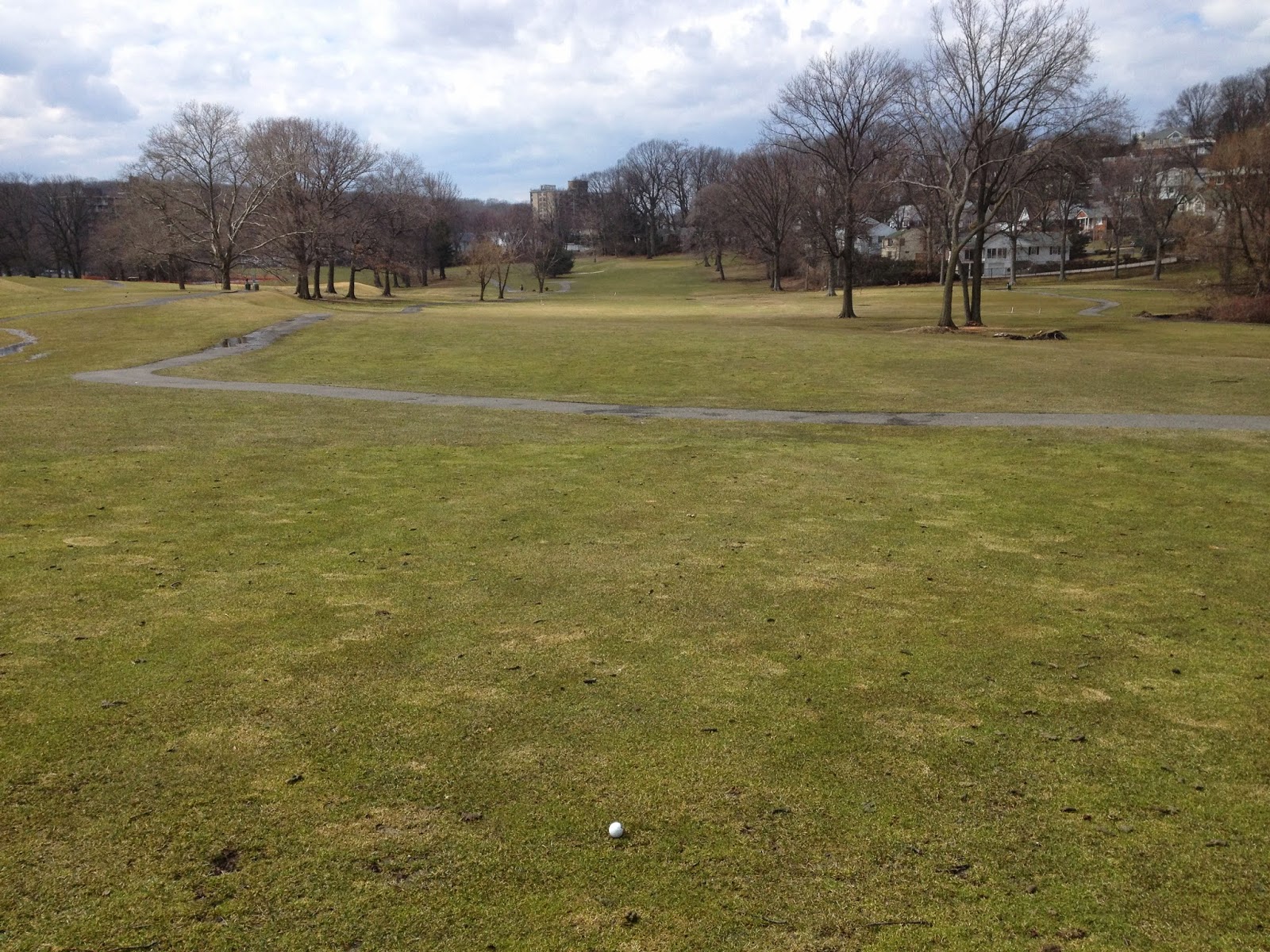 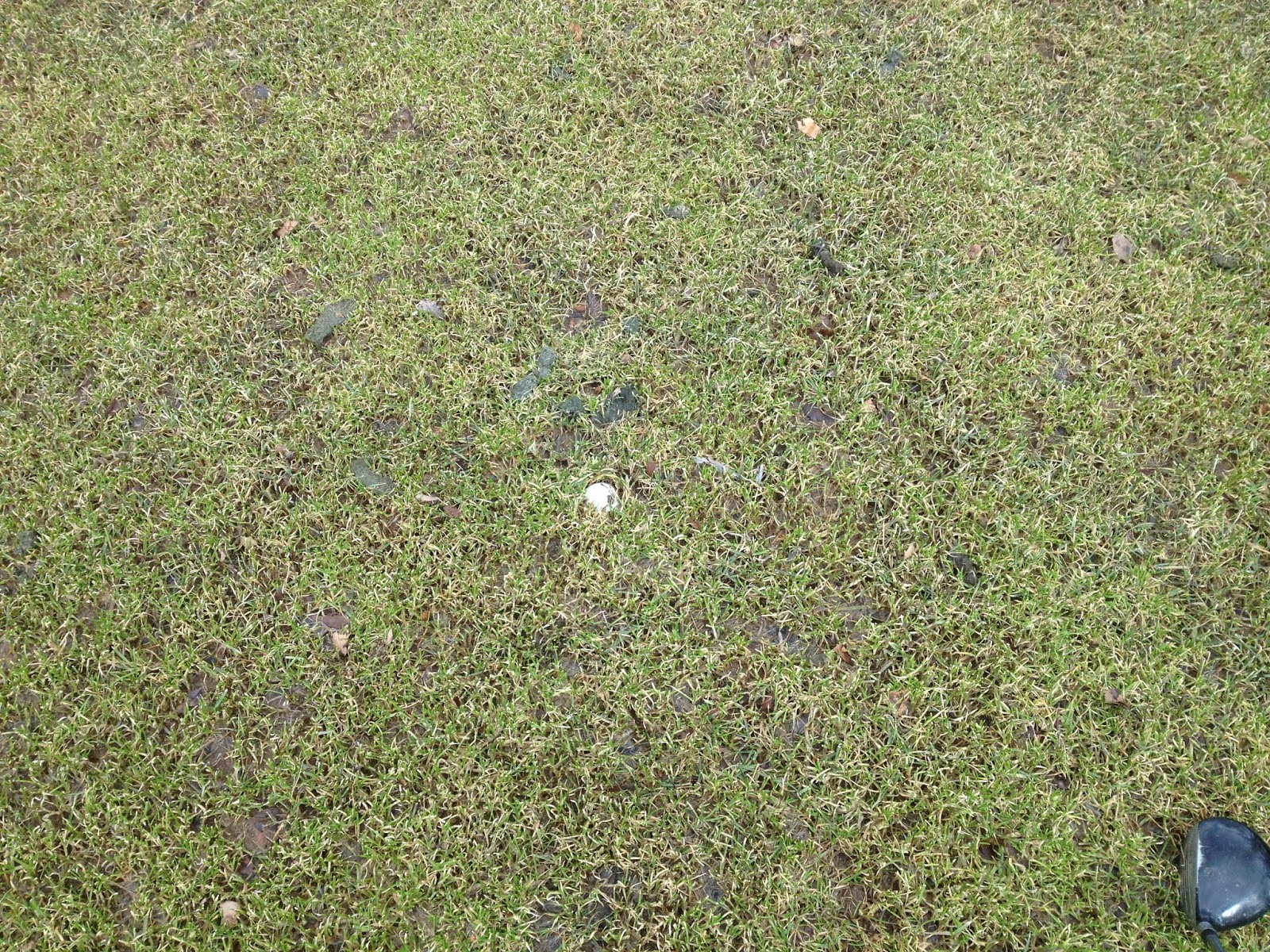 More plugging. One tee ball, a popped up 3-wood, was embedded in the earth, lost forever. When balls didn't plug, they had mud stuck on them. 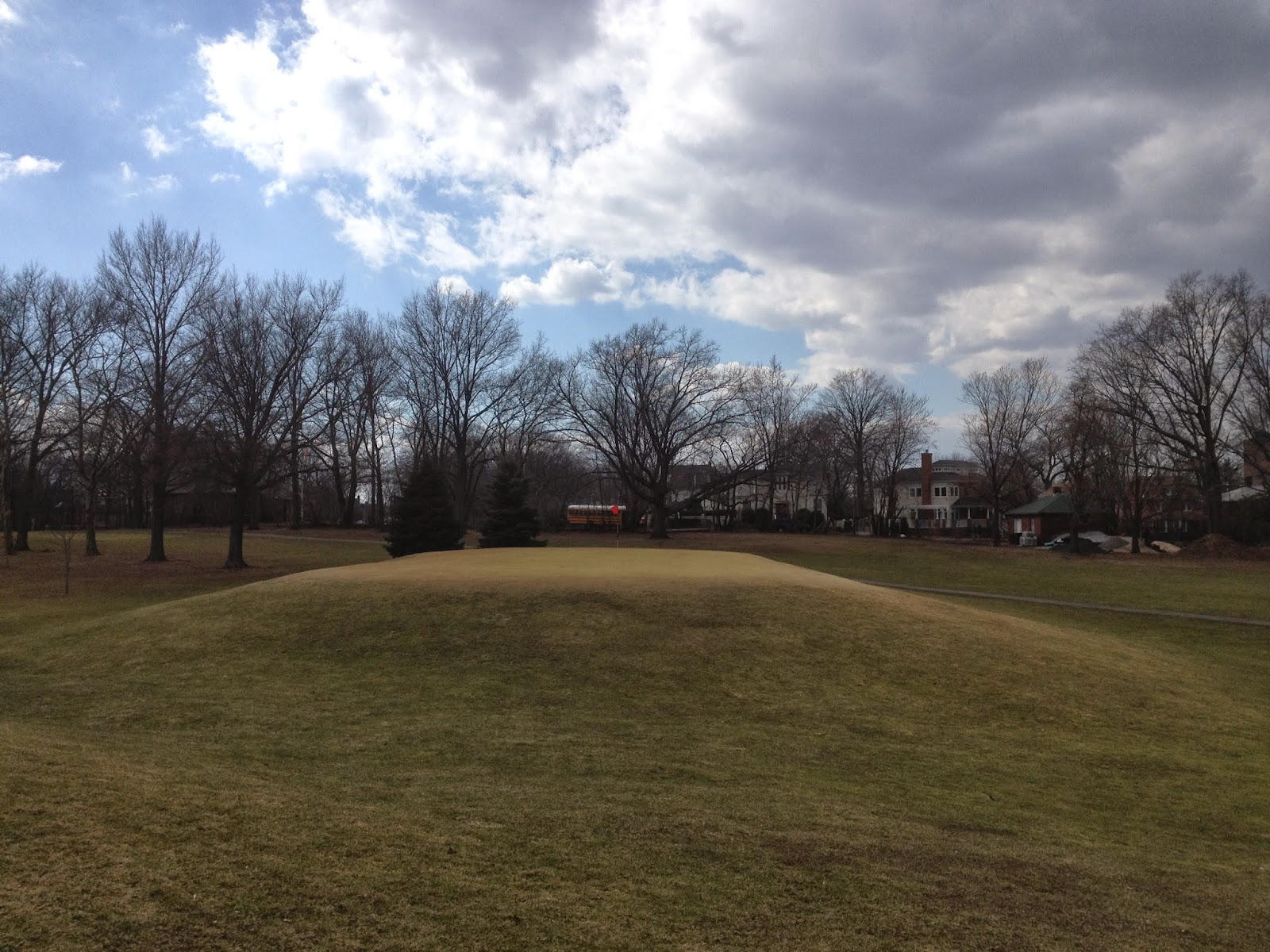 A good side view of the unbelievably shallow, as well as blind 7th green. Extremely dicey approach shot. 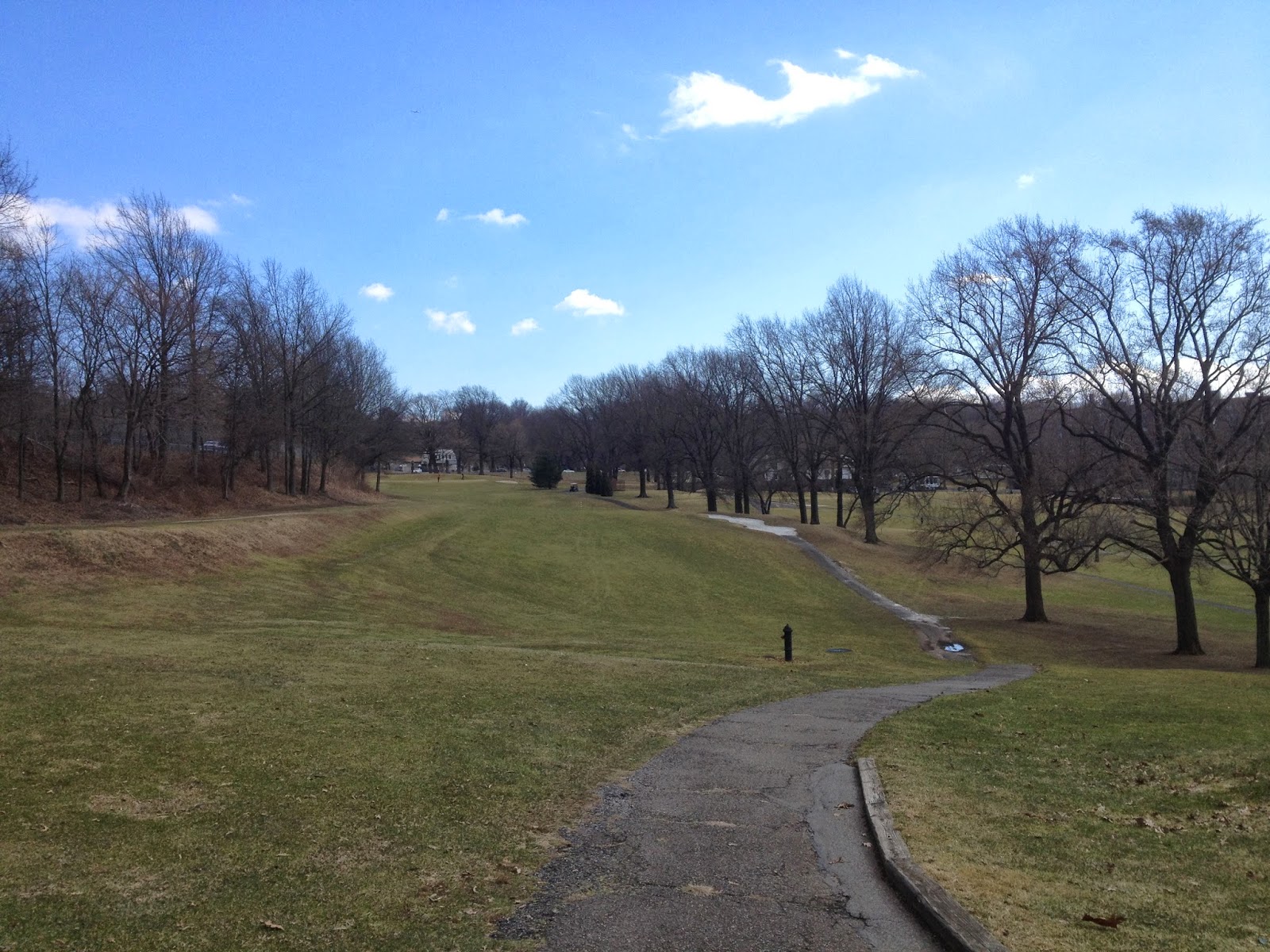 Another look at Silver Lake's very unique cart path that morphs into a fairway bunker, and back into a cart path. 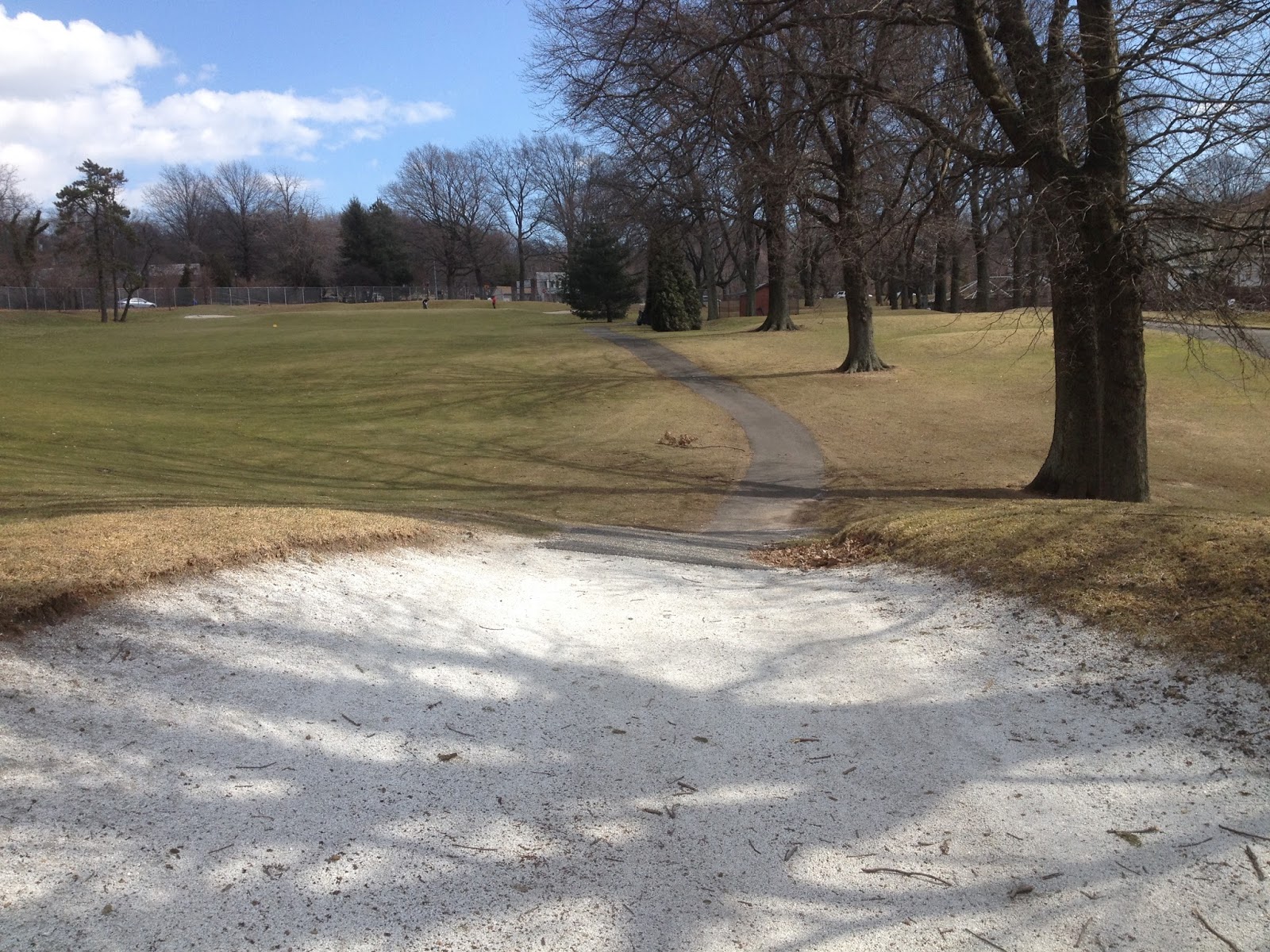 In terms of terrain, it's more like a cart path than a bunker. Rock hard. You have to be kind of nuts to try a shot off of this. It is one of the weirdest features I've ever seen on a hole.

Anyways, the wetness presented some more challenges. At least the temperatures were in the more seasonable fifties. Still blustery though, as I'm sure it will continue to be for most of spring. I made good on the pledge to play better and shot 85 this time. Looking ahead, I'll try to pick a backswing thought and stick with it, and also figure out how lag putting works again.

I'm gearing up for a little road trip over the next few days, so my next chance to play will be, if all goes to plan, at some out of state location. Stay tuned.

Posted by Legitimate Golf at 11:06 PM