Ghettogolf: farther down the handicap hole 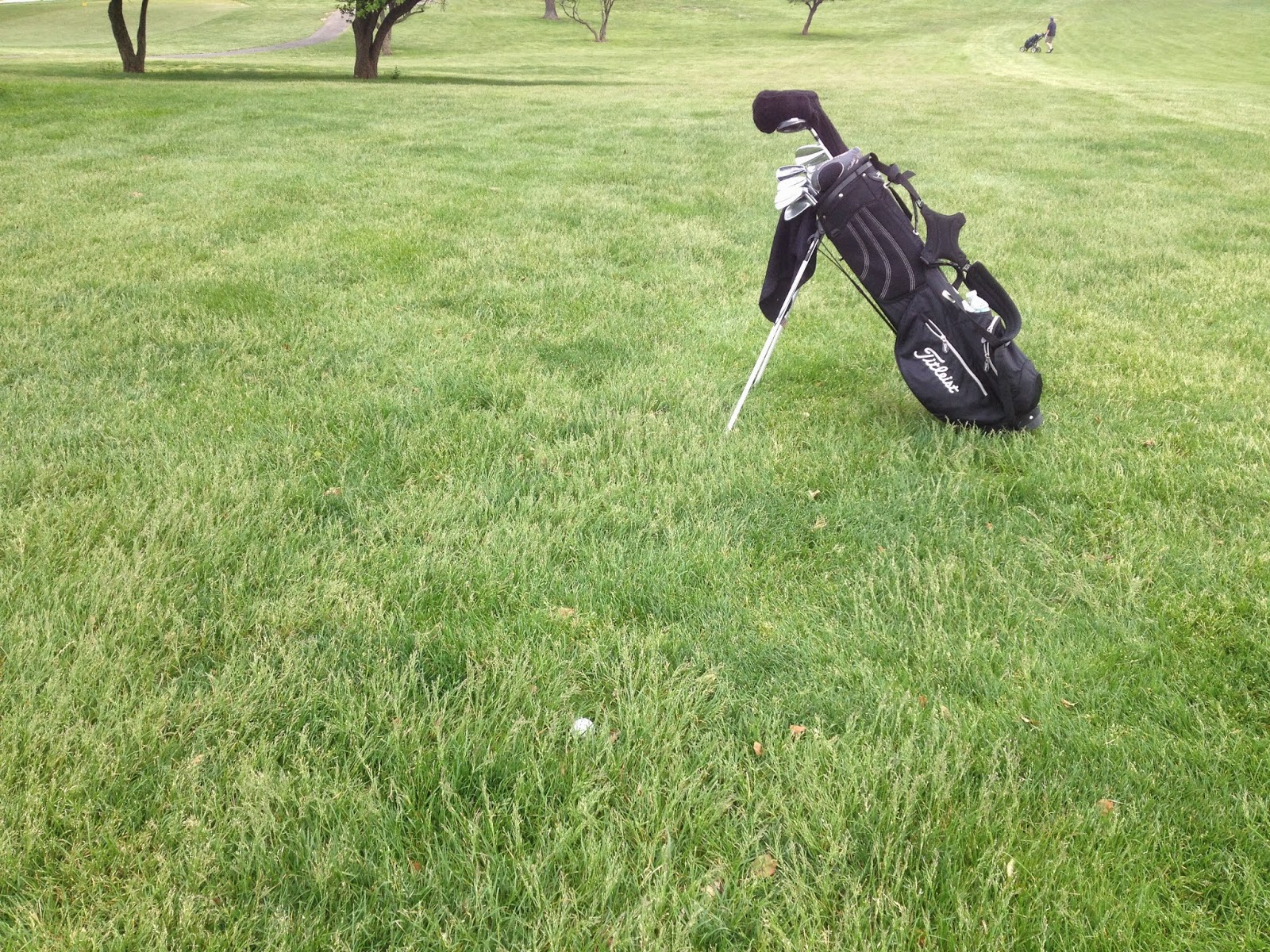 I thought it was about time that I gave the range balls a rest and tried some actual golf again.


I'll be blunt here. Silver Lake--my de facto home course this year--has become old hat already. It has a lot going for it but lately it has started to feel small and cramped; when I get there it's not long before I start thinking about getting back home. So I thought I'd revisit Dyker Beach, my old haunt for so many years.

Much has changed since I was last here--they changed the sequencing of the front nine. It now begins on what used to be the third hole, and the former #1 and #2 holes are now #8 and #9. The intent here is to relieve some of the famous Dyker Beach bottlenecking, but the logic is a bit hazy, and believe me I've thought long and hard about it.


Without getting bogged down in particulars, the old first hole was as wide open and easy a par 4 as you will ever see. The new first hole is one of the longer, tougher par 4's on the course with a blind, narrow and penal tee shot--very easy to hit into either tree line and lots of places to lose a ball. I'm having a hard time understanding how the latter situation will make any improvement to the bottleneck situation. But hey, maybe I'm just too ignorant to understand the science of golf course management. 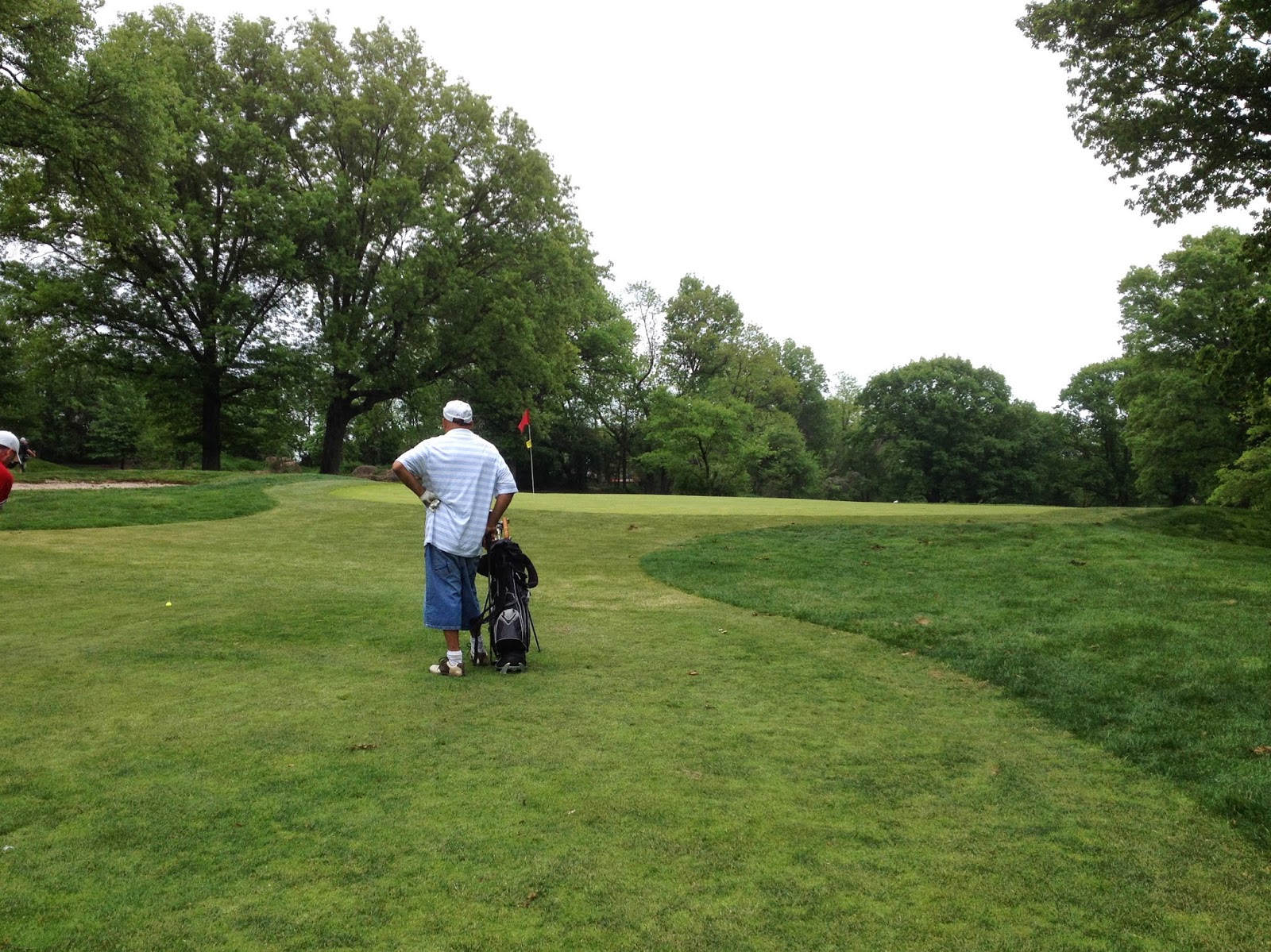 This was one of people in my group. Don't let the poser b-boy getup, XXXL shirt, denim shants and skewed hat mislead you--this is not actually a local at-risk youth, but rather a doddering old man just past retirement age--a uniquely New York City kind of cretin I guess. I stopped short of naming him Creep of the Week but he still gets a mention for managing to irritate everyone. He was afflicted with a kind of diarrhea--not the literal kind but the kind that compels a person to release a steady stream of obvious and completely useless remarks, particularly about the results of everyone's shots.

"There was no break."

It got old fast, but instead of getting mad I just joined in the stupidity and started color-commentating his shots.

But of course he was so out of it that none of this had any chance of registering and no comeuppance was really gotten unfortunately.

Later in the round, on the hardest hole on the course, homeboy did quite well to get to the green and set up a seven-footer for par. As a kind of behavioral experiment while he was setting up to putt I blurted out, "Hey, what do you say I give you that putt, you walk outta here with a par." At this point I was so annoyed with the round, and life; I had no shits left to give. I hoped he would take the stupid thing and make an ass of himself in front of everyone.

He looked up at me startled, with a face that was all giddy and juvenile and incredulous. I nodded in the affirmative; he snatched up the ball gleefully and scuttled off the green. The other two guys howled in protest, saying that next time they would have to approve before any putt is gimme'd. Couldn't tell if these two were serious but since they had made a huge stink earlier in the round about me tapping in a six-inch putt they were kind of dead to me.

You know, wantonly conceding a putt that wasn't even mine to concede was probably a mean, ill-intentioned move but hey, it really seemed to make the guy happy.

To his credit though homeboy managed his ball tidily and played quickly, which is probably what spared him from the full creep treatment. I may be a horribly judgmental and intolerant person but fast play is not lost on me. 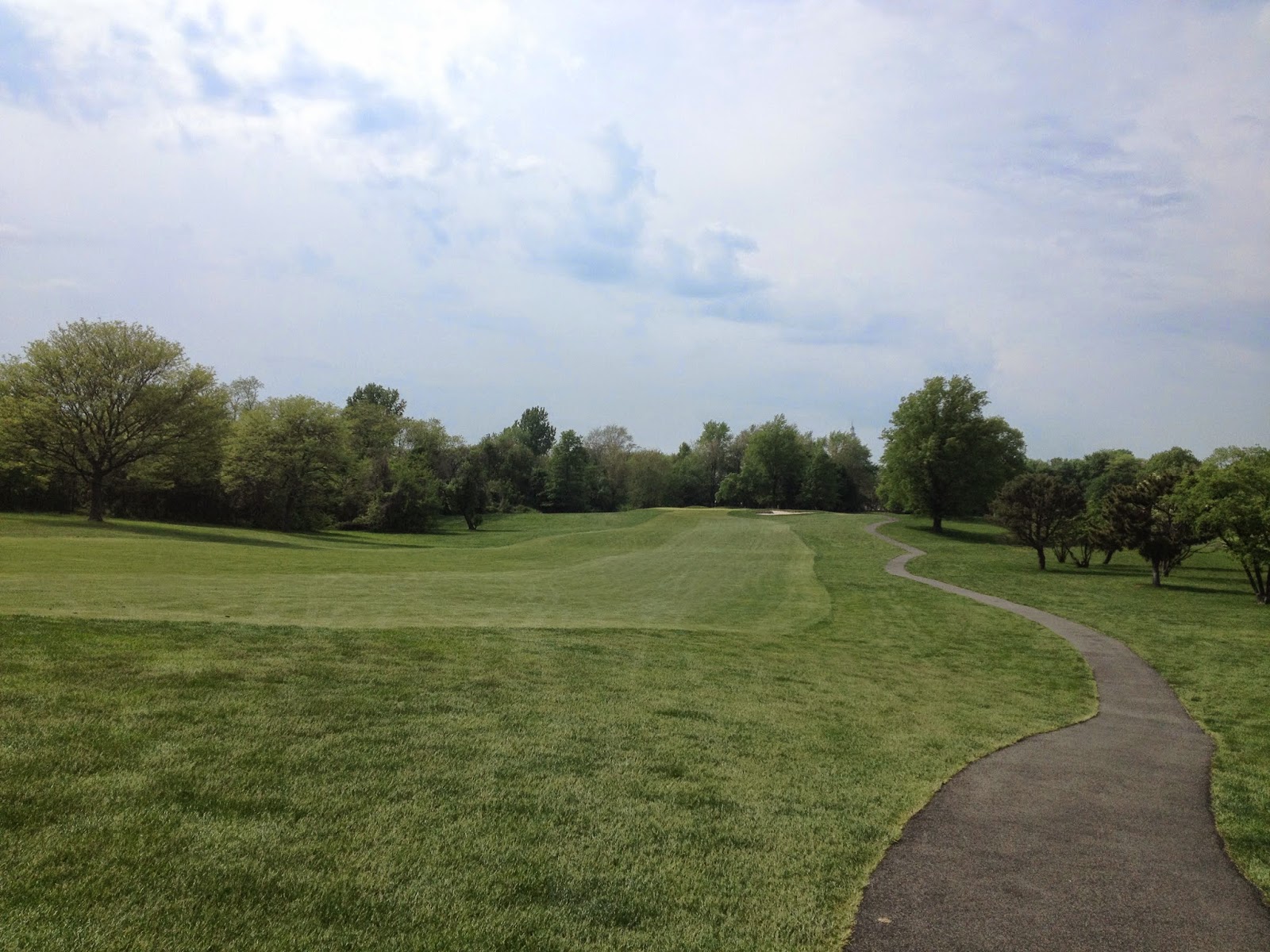 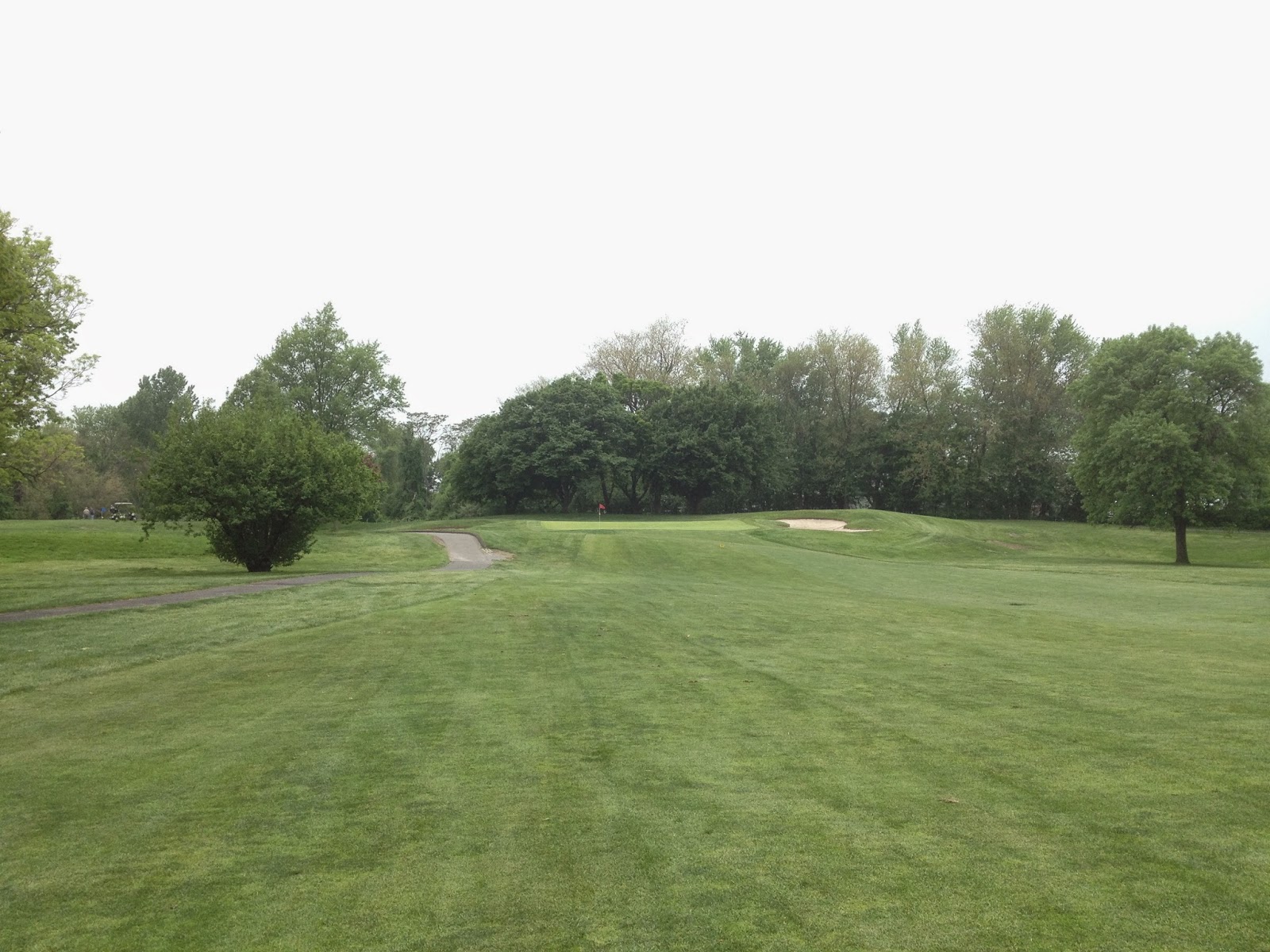 The course is in pretty nice shape. Since my last visit the greenery has exploded. 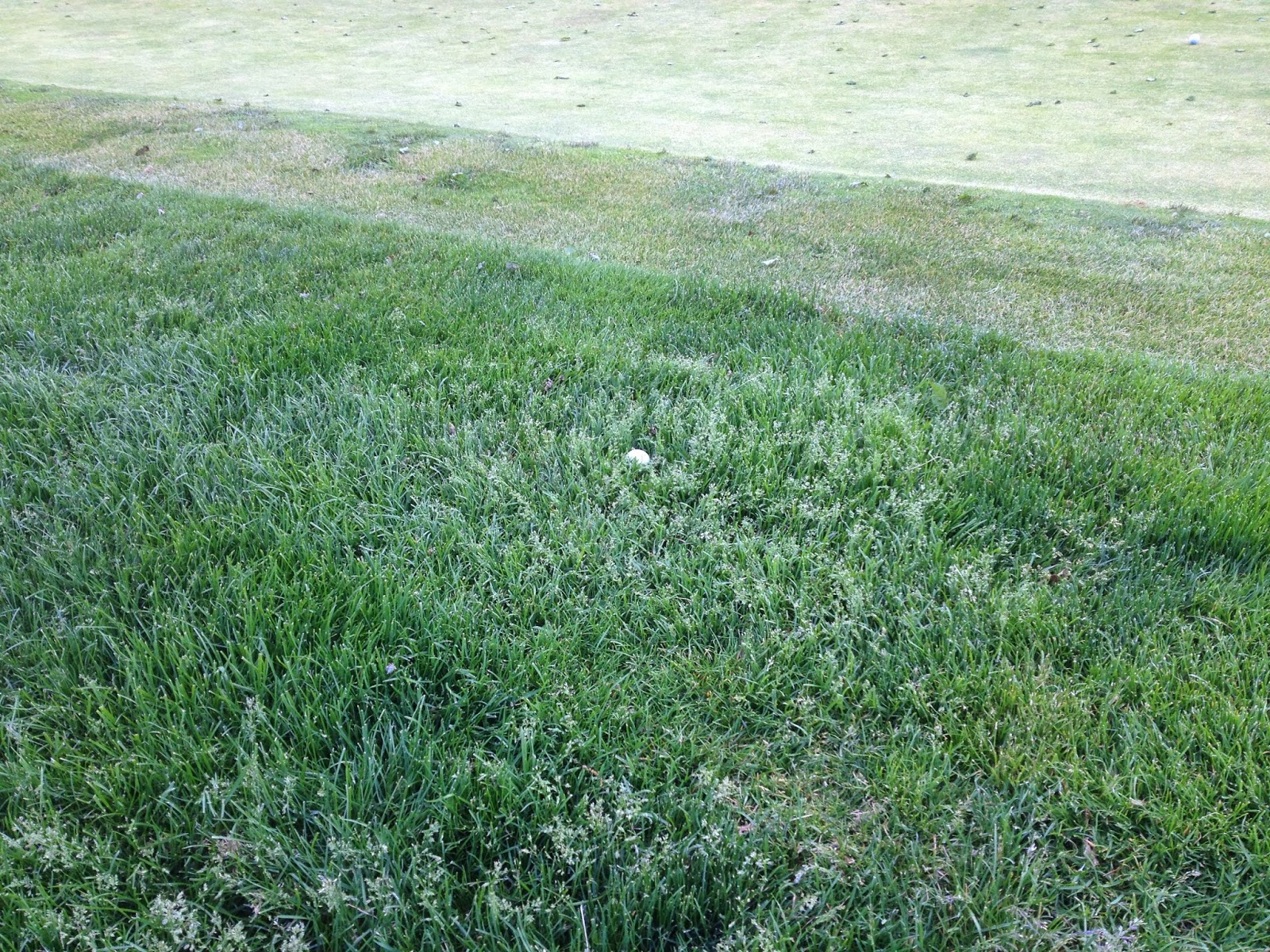 In particular the rough around the greens has been allowed to grow comically long and thick--around six to eight inches at its worst. Several balls were nearly lost forever after trickling a couple feet off the greens. I think the USGA needs to get involved here. On second thought, no. This is Dyker. A course renowned for its slow play and general managerial indifference. It is also reputedly the busiest course in North America and as such doesn't need to do jack squat to attract business. Basically what I am saying is that Dyker cannot be an efficient smooth-running golf course because as much as everyone would benefit, it just wouldn't fit. I realize this is quite the stupid, illogical reasoning but such is life in NYC.

My lack of enthusiasm about actual golf at this point is probably betraying the fact that I shot another abominable score, marred by trainwreck triple bogeys and worse. I have been yammering on about all these swing improvements I've made lately but on this day those so-called improvements simply vanished on me. It's a funny thing how even in a pointless round, as soon as you get over the ball there is pressure. Whatever you do to this ball, there will be real consequences and knowing this leads to all sorts of tension, hesitation, second-guessing, regression, paralysis by analysis. All day I was setting up too far from the ball. I knew what I was doing wrong the whole time but still felt powerless to do anything different. Truly pathetic. It did not help matters that my backswing had all the structural integrity and live tension of an overcooked noodle.

So another 90-plus score and the handicap continues its freefall. At this rate I might find myself in the 18+ flight in the upcoming tourney. I get that this is a first-world problem of the first-worldiest order, but it is still distressing on an existential level. It's like what the hell is happening to me? Is old age setting in? Is it the mind deteriorating, or is the body? I feel like a helpless bystander watching my handicap index get larger and larger with every round. Whatever. Let's try to see the humor in all of this.
Posted by Legitimate Golf at 1:19 PM