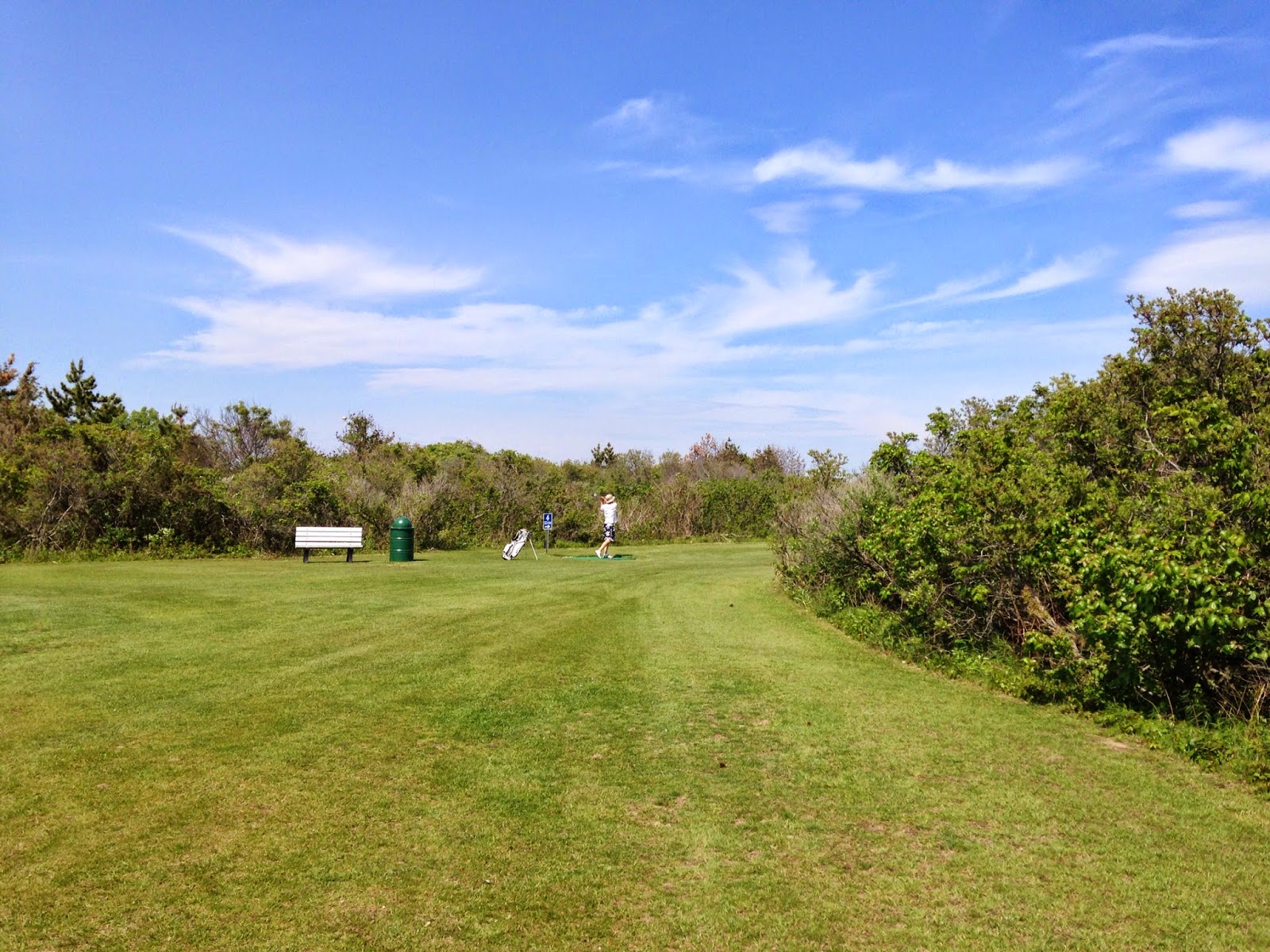 Along the south shore of Long Island exist three (that I know of so far) state-owned and operated seaside pitch and putt courses. Over the holiday weekend we headed to one of our old favorites, the beach at Robert Moses State Park, about an hour outside of the city. 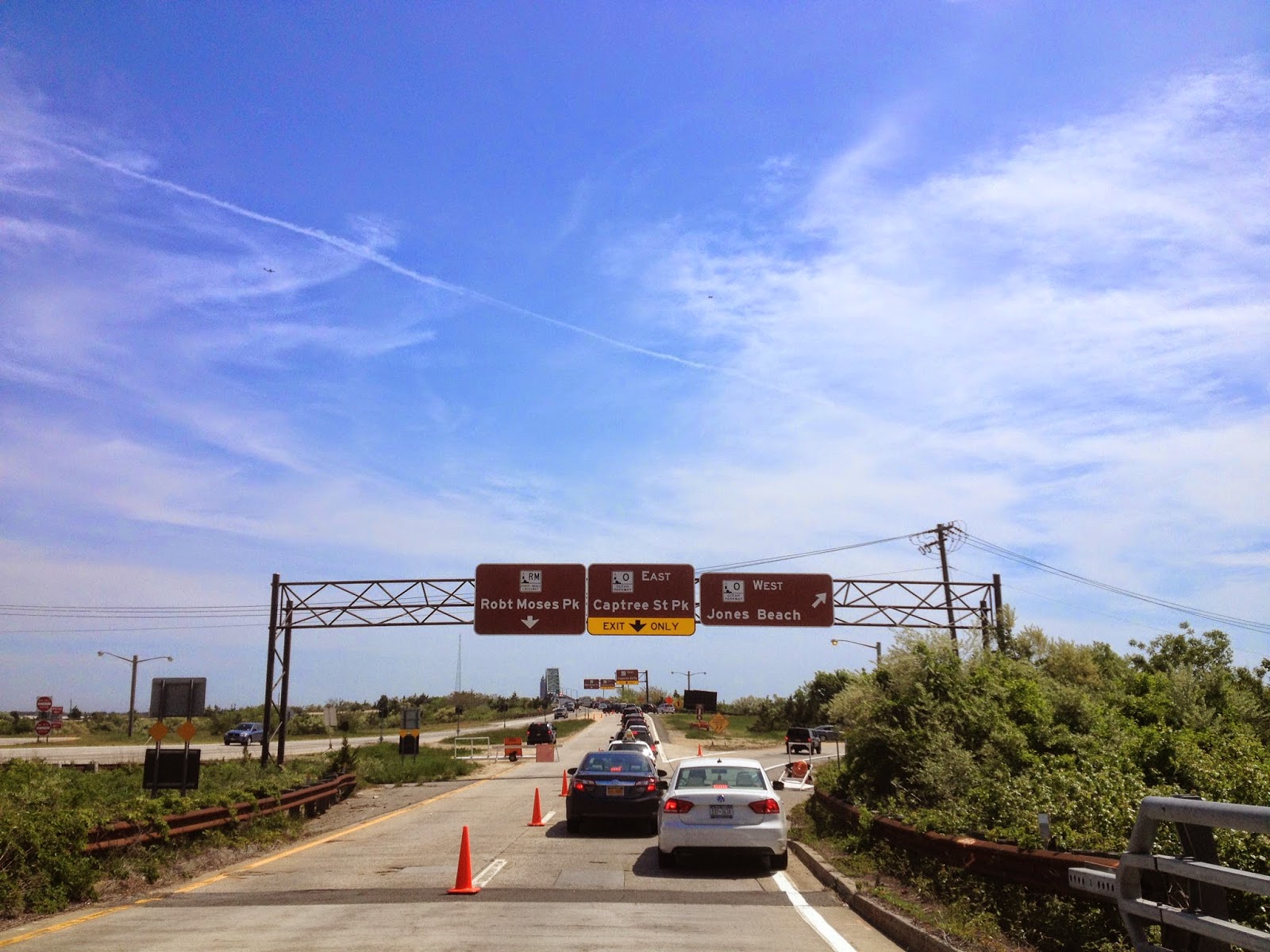 But once we got about about a mile short of the parking lot, a heavy police and fire department presence was tending to some unseen emergency on the tiny two-lane bridge, roadblocking all traffic onto Fire Island. Rather than wait it out we detoured westward onto Jones Beach Island, since we knew of another course at the state park there. 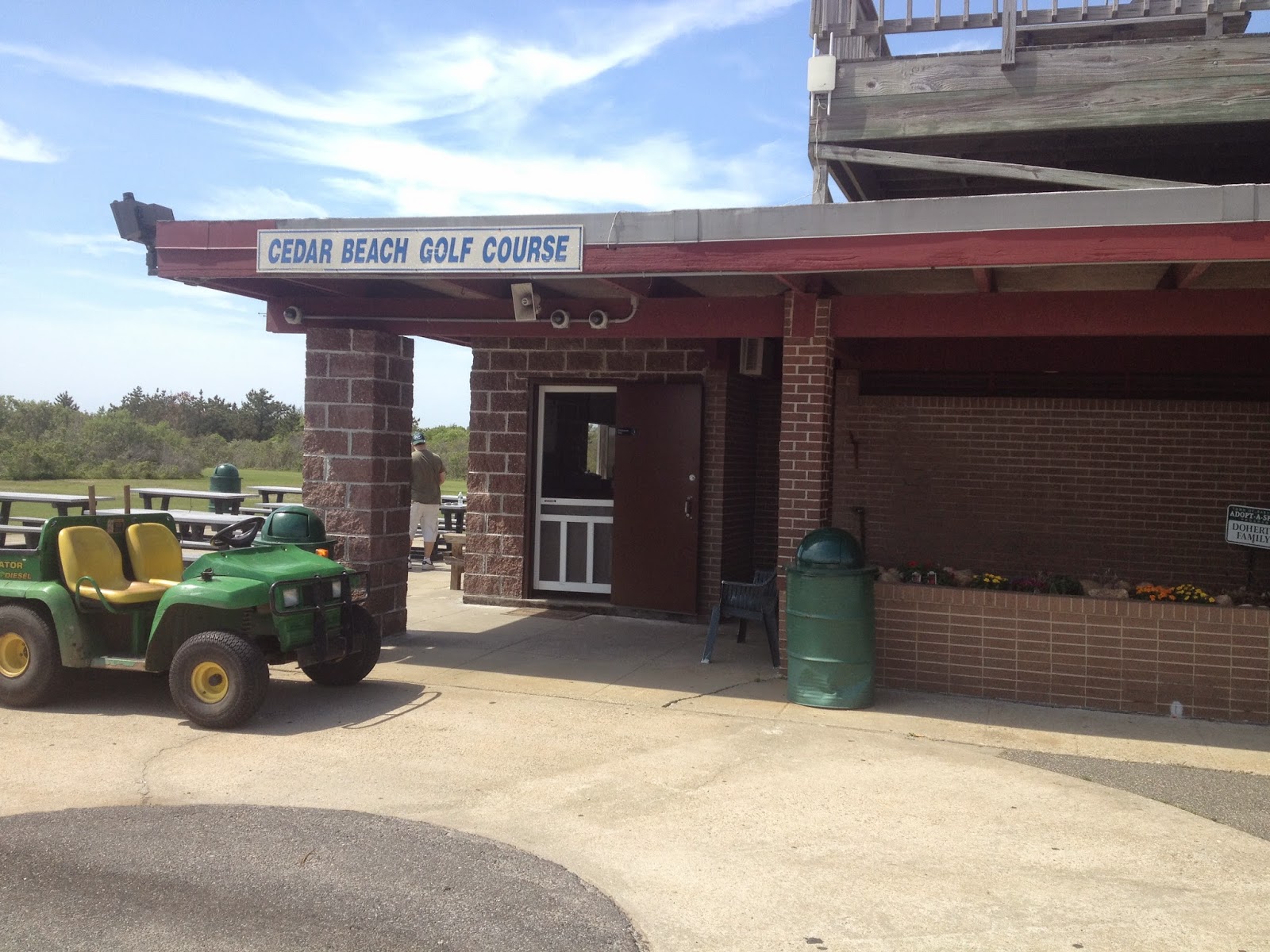 But just a few miles down the highway we saw a random-looking road sign indicating parking for a golf course. With no idea what it meant we made the split-second snap decision to turn off the road and check it out. It turns out that tucked away behind some bluffs is another beachside miniature links, in a very similar vein to Robert Moses. I had never even heard the name "Cedar Beach Golf Course" until today. 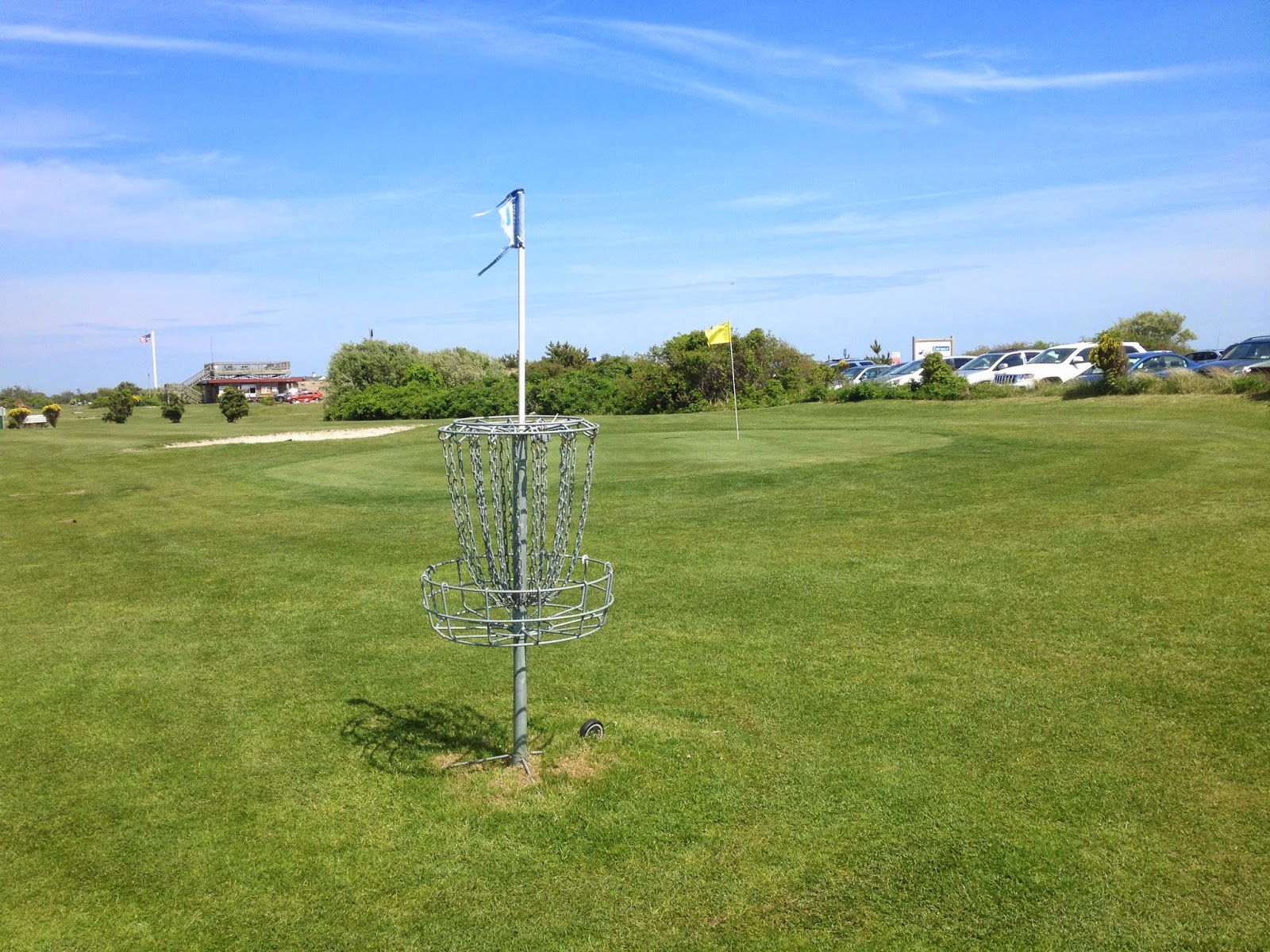 Good God, it doubles as a disc golf course. Totally bitchin man. (I've always wanted to try it and soon as I can get my hands on a set of disc golf clubs, I am so here.) 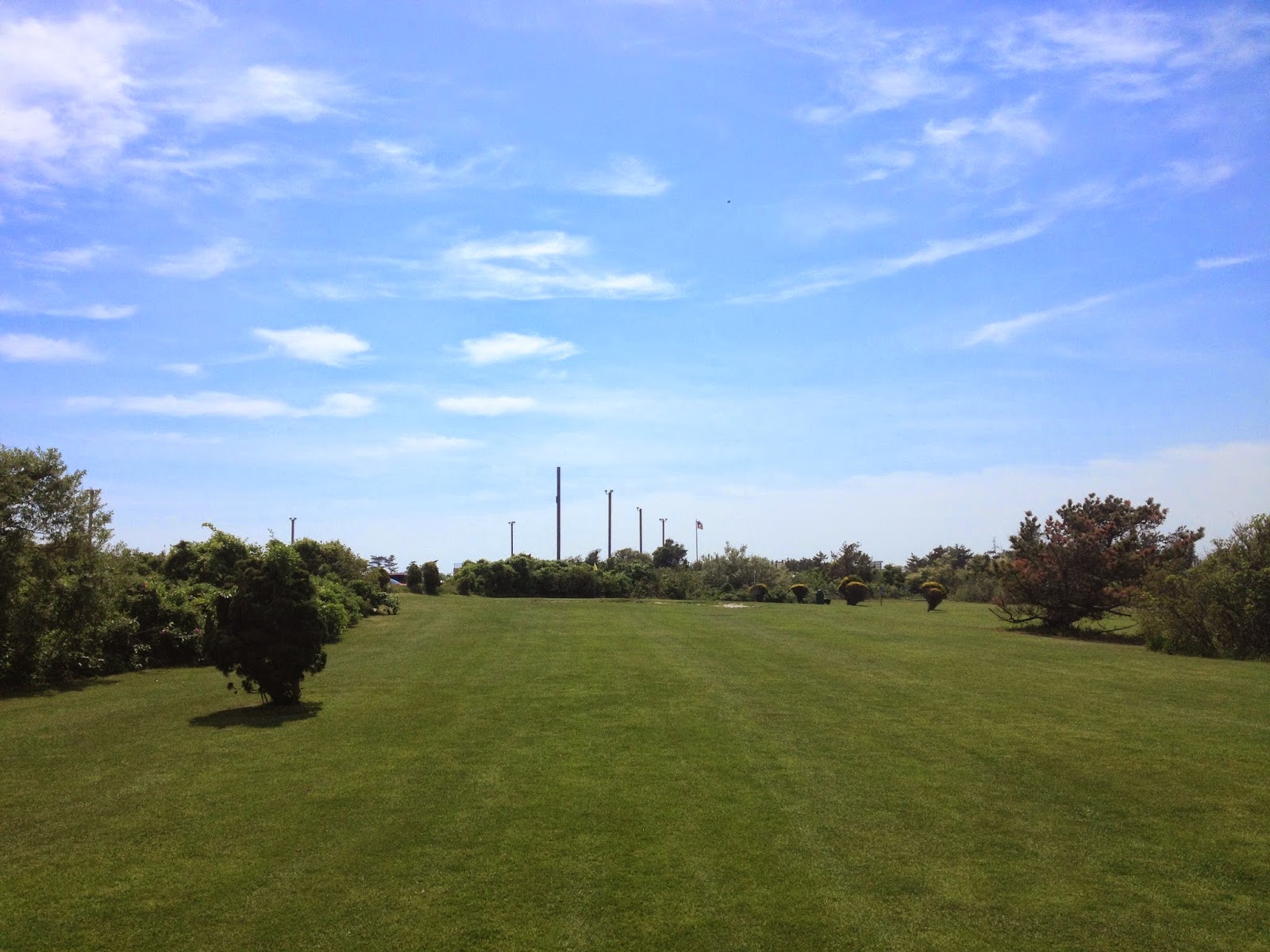 By my guess these courses were begat at the inception of these state parks themselves, back in the Depression era, a time when recreation was something taken seriously by policymakers not to mention a time when golf was probably considered a nouveau, up-and-coming sport.

That great urban planner Robert Moses was a big proponent of games and recreation and it's almost solely due to his providence that such relics exist today. Because in 2014 government doesn't seem too keen on recreation nor give two shits about golf, which probably sits at the bottom of the parks' department priorities list, near shuffleboard and bocce ball. Indeed in writing this up I uncovered the recent news that the Jones Beach pitch and putt (our intended detour) had been washed out by Hurricane Sandy, has sat closed since, and is now slated for demolition and repurposing as an adventure sports park thingy featuring zip-line and rock-climbing.

Thus it would seem that these remaining beach par 3's--Breezy Point, Robert Moses and Cedar Beach--might not be long for this world. Better enjoy them while we can. 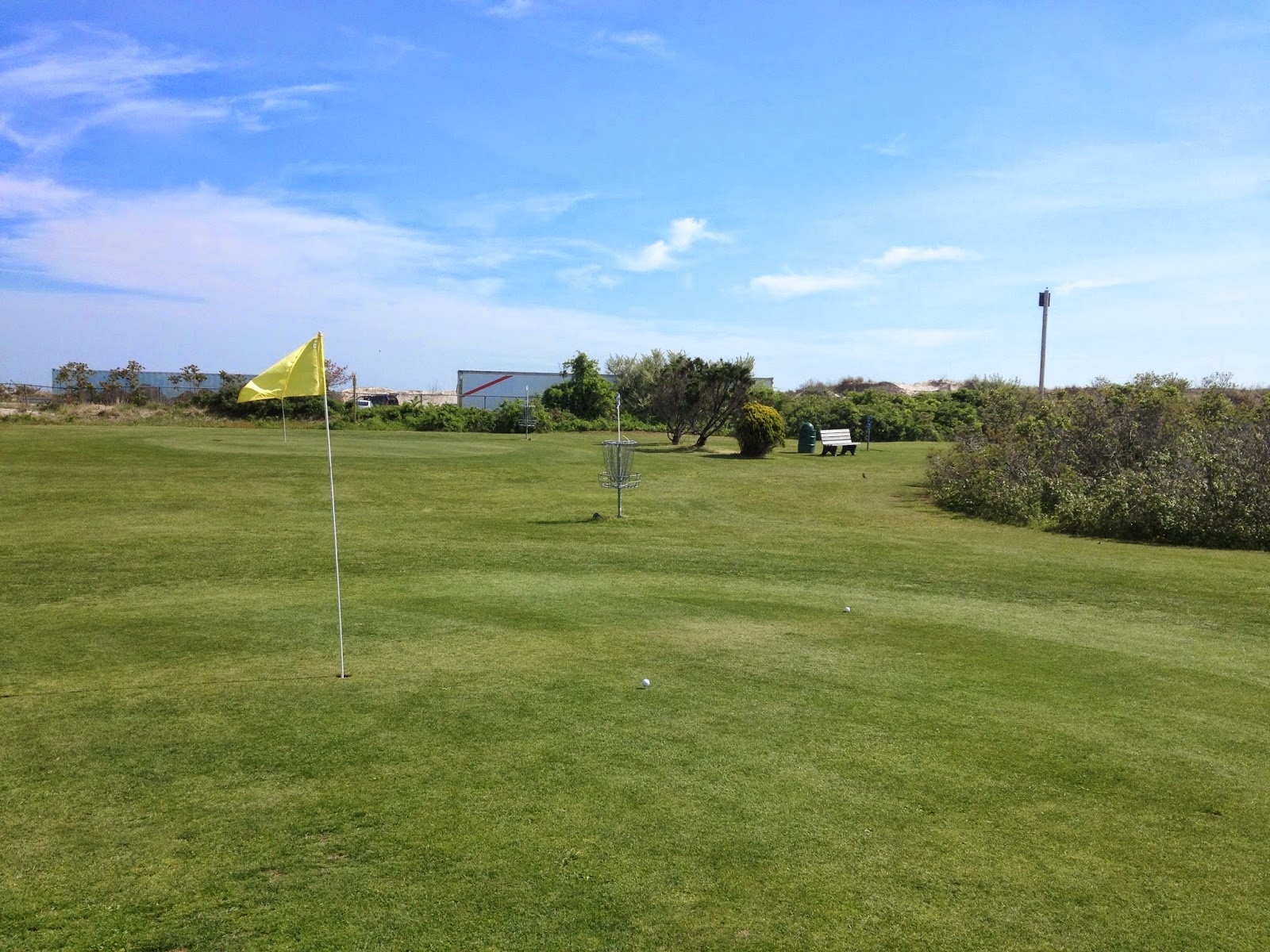 And really enjoyable they are. Ramshackle but dutifully maintained, the diminutive courses hark back to a simpler, quieter time and are untainted by anything newfangled like wi-fi or so much as a "like us on Facebook". Cedar Beach doesn't even have a Yelp review page for God's sake.

The green fees are out of a past era as well--measly eight bucks for out-of-towners.

Despite all that it's got going for it the place was nearly empty on this, a beautiful weather holiday weekend. Yup, definitely can't be long for this world. 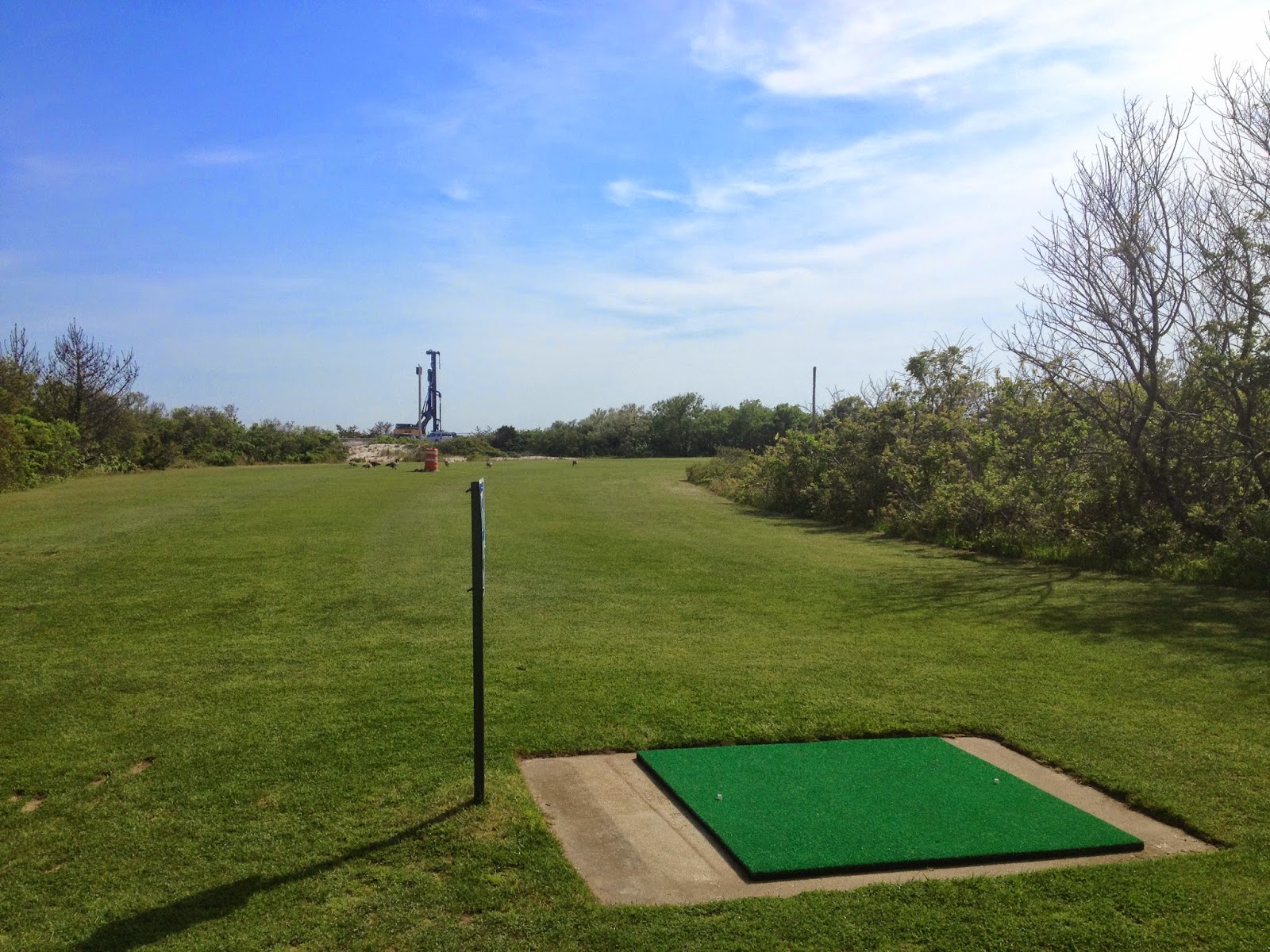 Like at all pitch and putts I've been to around here, the teebox consists of an astroturf mat, which is kind of nice in that it spares you from embarrassing fat tee shots, at least for one day--like you need that kind of agitation when you're at the beach trying to relax with your lady and have some casual fun. 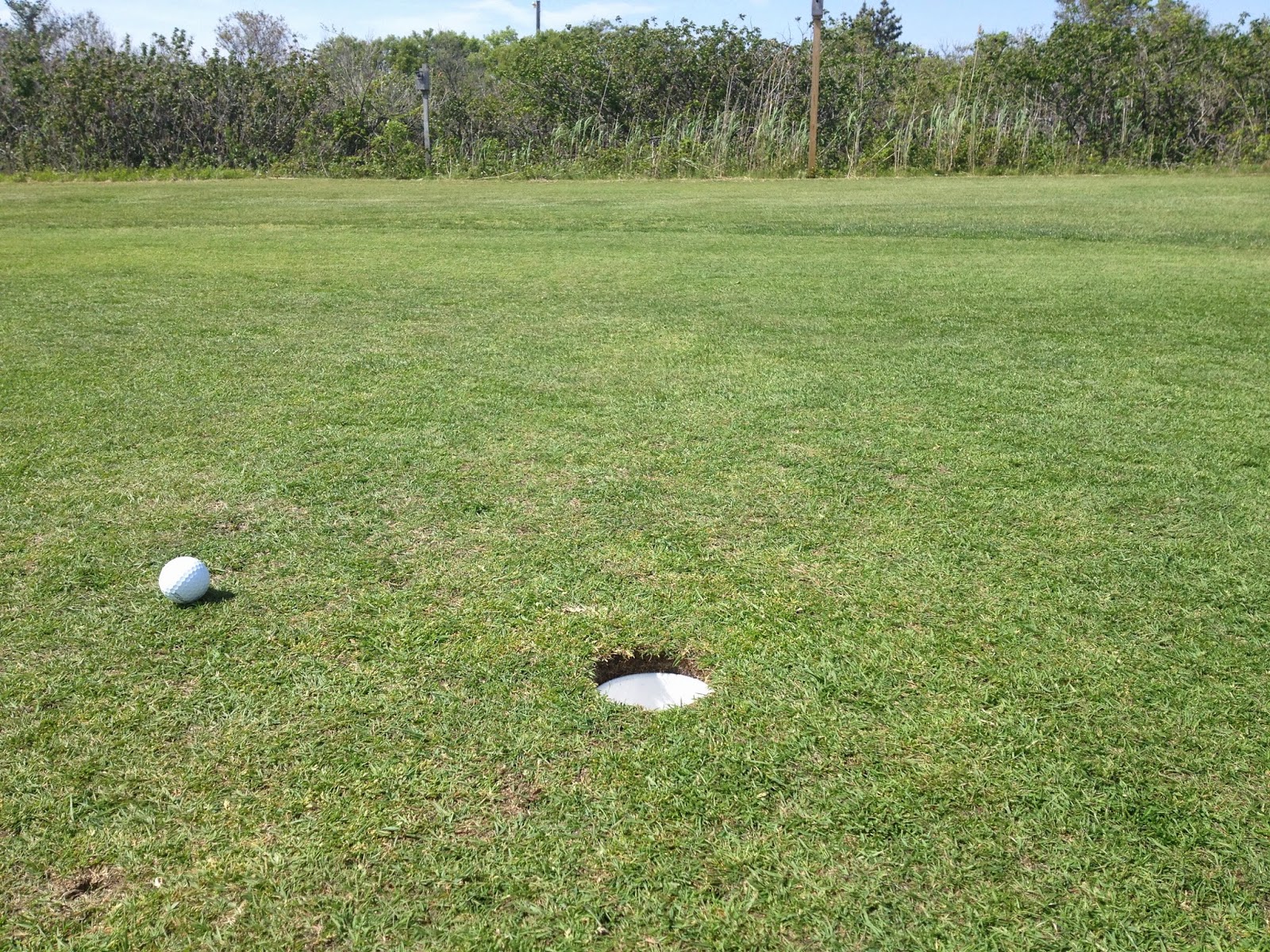 The greens are not greens in the conventional golf course sense of the word. It's kind of how I imagine the condition of greens maybe a few centuries ago. But, if you roll with it and keep up a good attitude, some putts can be holed. Really have to whack the long putts to reach the hole. 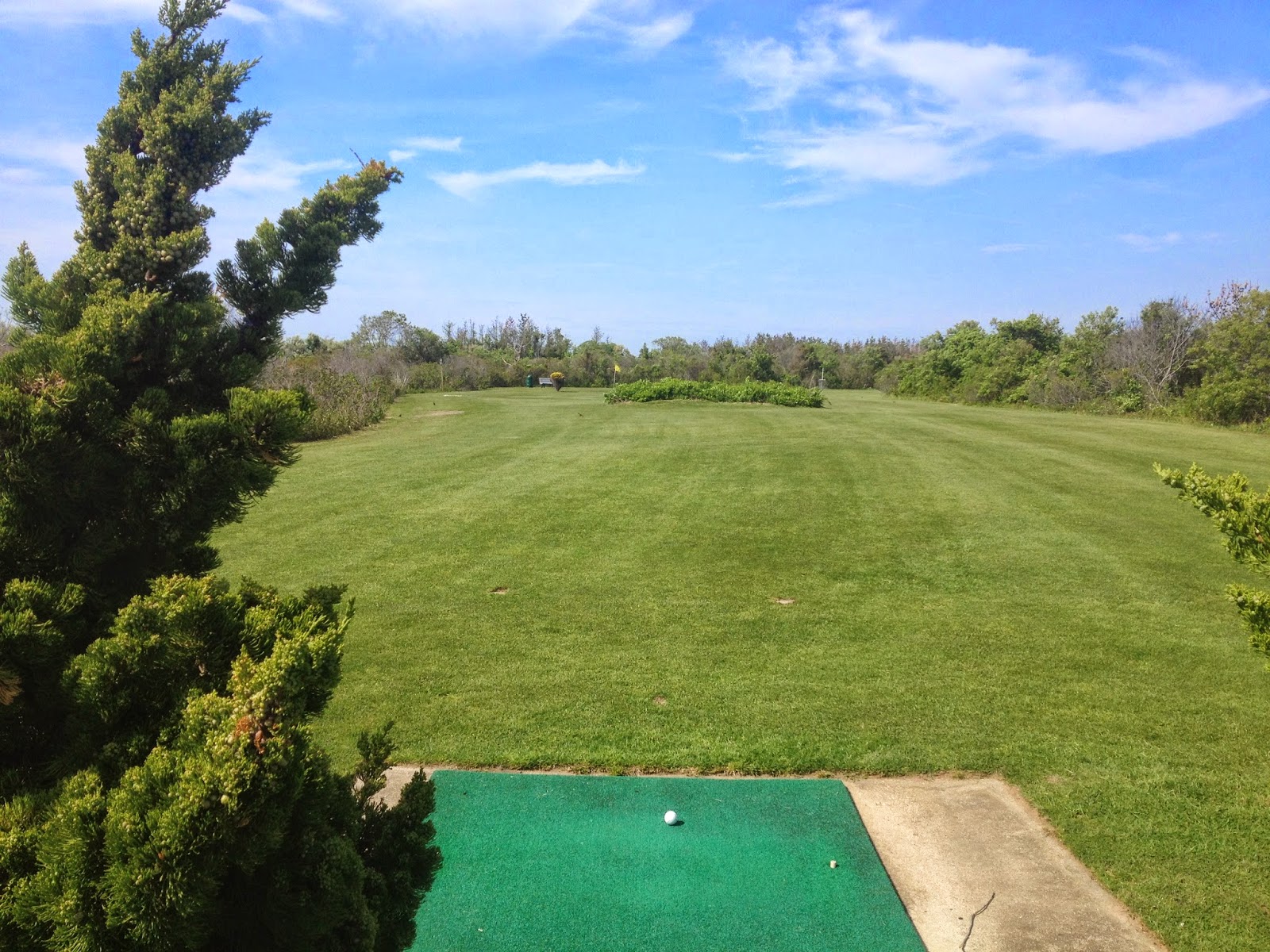 To my delight Cedar Beach presents a slightly tougher all-around challenge than what I've come to expect from the New York pitch and putt scene. Stiff breezes are to be expected on the coast always, but this course adds further difficulty via some tricky short-sided tee shots to greens guarded in front with real beachy bunkers or poison-ivy riddled hazards. 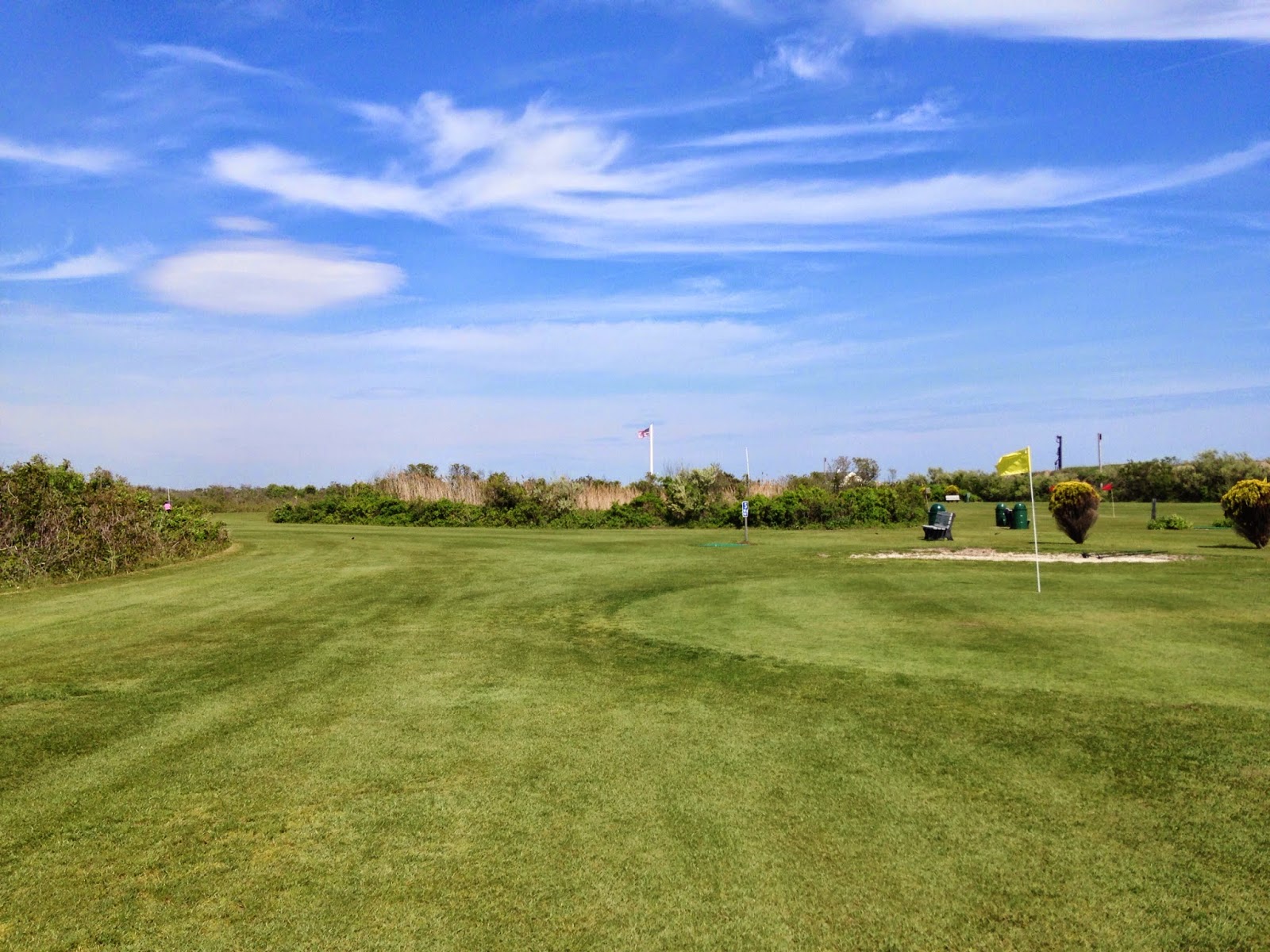 Old Glory was at attention all day, stiffened by a persistent southerly wind.

Ms. Legit is still a rank beginner, but she feels right at home in a pitch and putt situation. When she moaned at the turn about having made "only" two pars on the front nine, it was clear she was having a good time.

I have said it before and I'll say it again--pitch and putt is the answer to many of the world's problems. It's quick, it's easy; but it's still full-swing golf, just on a smaller scale. Distances might be short but there are plenty of instances where you'll need to flail at it with all you got--and you still come up short! You loser. It's a manageable challenge for newbies that's still stimulating to experienced players. What other game has that kind of broad appeal? None, probably! What I really like is how pitch and putt allows the newbs like Ms. L to step into a sort of microcosm of a conventional golf round with all its ups and downs, to experience the tough, oft-wild emotional journey that eighteen holes tends to comprise.

We even learned about strategy and course management today. A lot of holes here have hazards directly the behind the greens, and with a stiff Atlantic breeze at your back it's all too easy to send one long. Which we both did early on. So in those instances we practiced "laying up" short of the greens at all costs and taking the big number out of play. Dammit if that's not edutainment then I don't know what is. 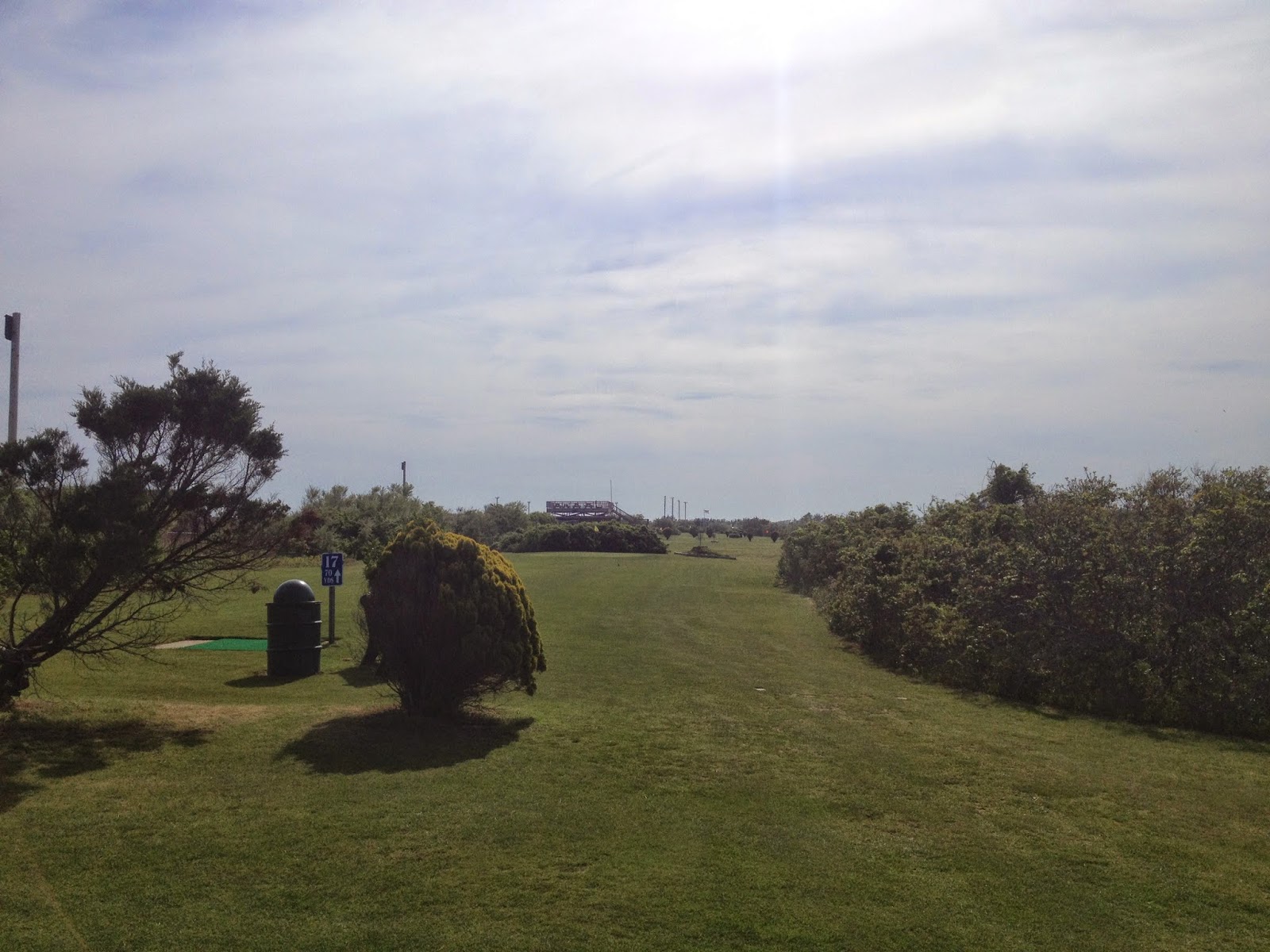 Thus we had a thoroughly fun time. I got to take a break from my recent spell of crap golf and managed to play somewhat tidy, even hopping aboard the par train for a couple of rides. (Okay so it was a tiny toy choo-choo train, if we are to use that metaphor; give me a break--desperation has set in.) For my part there's simply nothing negative or snarky to say (for a change) about the experience. In fact both of us were feeling it to such an extent that after eighteen holes we went around the front side one more time. The twenty-seven hole round is all too common for the junkies among us, but that Ms. L was every bit as ready for more (and ended up shooting eight over for that final nine--respect) is a ringing endorsement. We will certainly be back.
Posted by Legitimate Golf at 3:49 PM