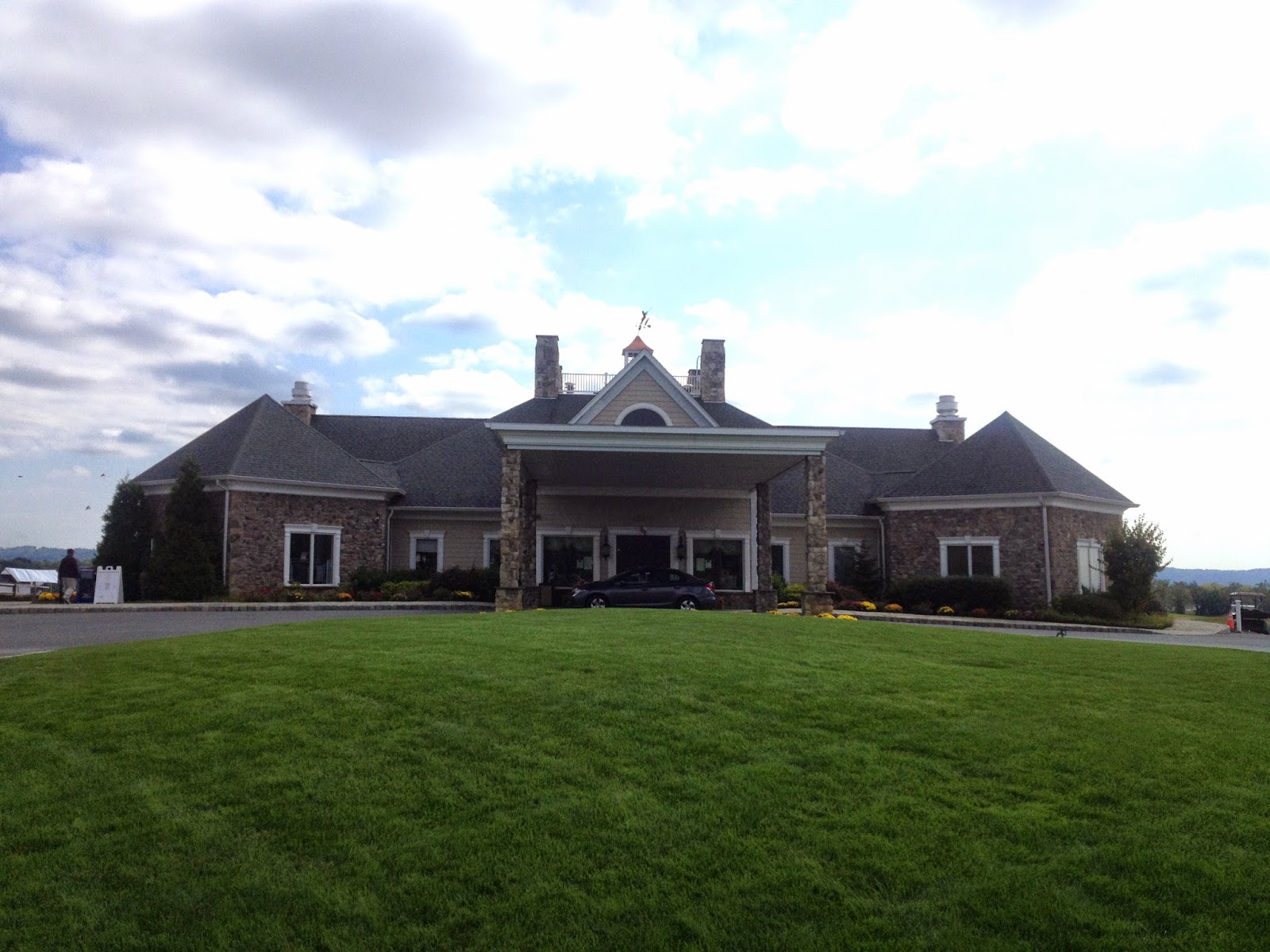 For the past couple of years I've been celebrating birthdays by burning rubber out of the city and playing a round of civilized golf with Ms. L, on a course that's a little more upscale than I'm comfortable with. Last year was New Jersey's Crystal Springs resort; the year before that, Jack Nicklaus' Mansion Ridge in the Hudson Valley. For someone who's never really been too interested in birthday celebrations, this is shaping up to be a real treat and something I actually look forward to.

This year I picked out the somewhat pompously-named Architects club, located on the westernmost edge of New Jersey, right up against the Pennsylvania state line. (To completely escape the reek of the city, you have to drive for at least an hour.) 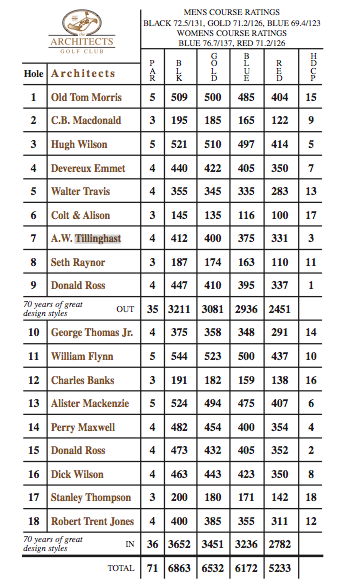 Architects is a young course, built at the turn of the douchebag century, but it strives to connect with the past by making each hole a tribute to a renowned old-timey designer. Now I am among the uncouth masses lured in to golf during the Tiger Woods boom-era, but hopefully such historically-rigorous homages as these will not be completely lost on my ignorant ass. After all I've sampled the designs of guys like Robert Trent Jones, Tillinghast, Mackenzie and Ross and done so with the earnest eagerness of a Japanese tourist. I can appreciate the opportunity to make a connection to some of the deep roots of golf, however flimsy. 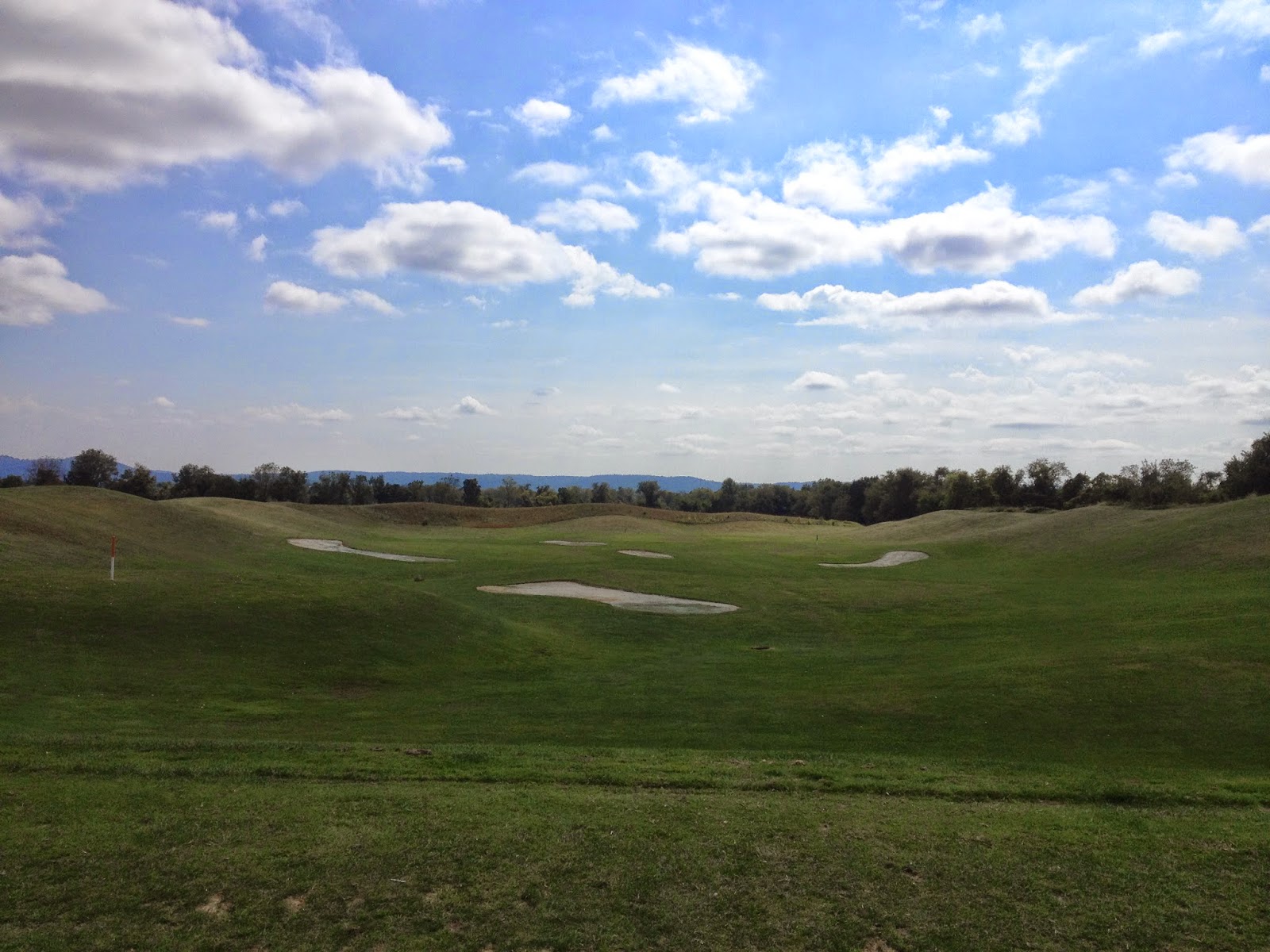 On the picturesque driving range. I am so unaccustomed to a pre-round warmup that I am kind of at a loss at what to do. I just whack a few balls around with assorted clubs. 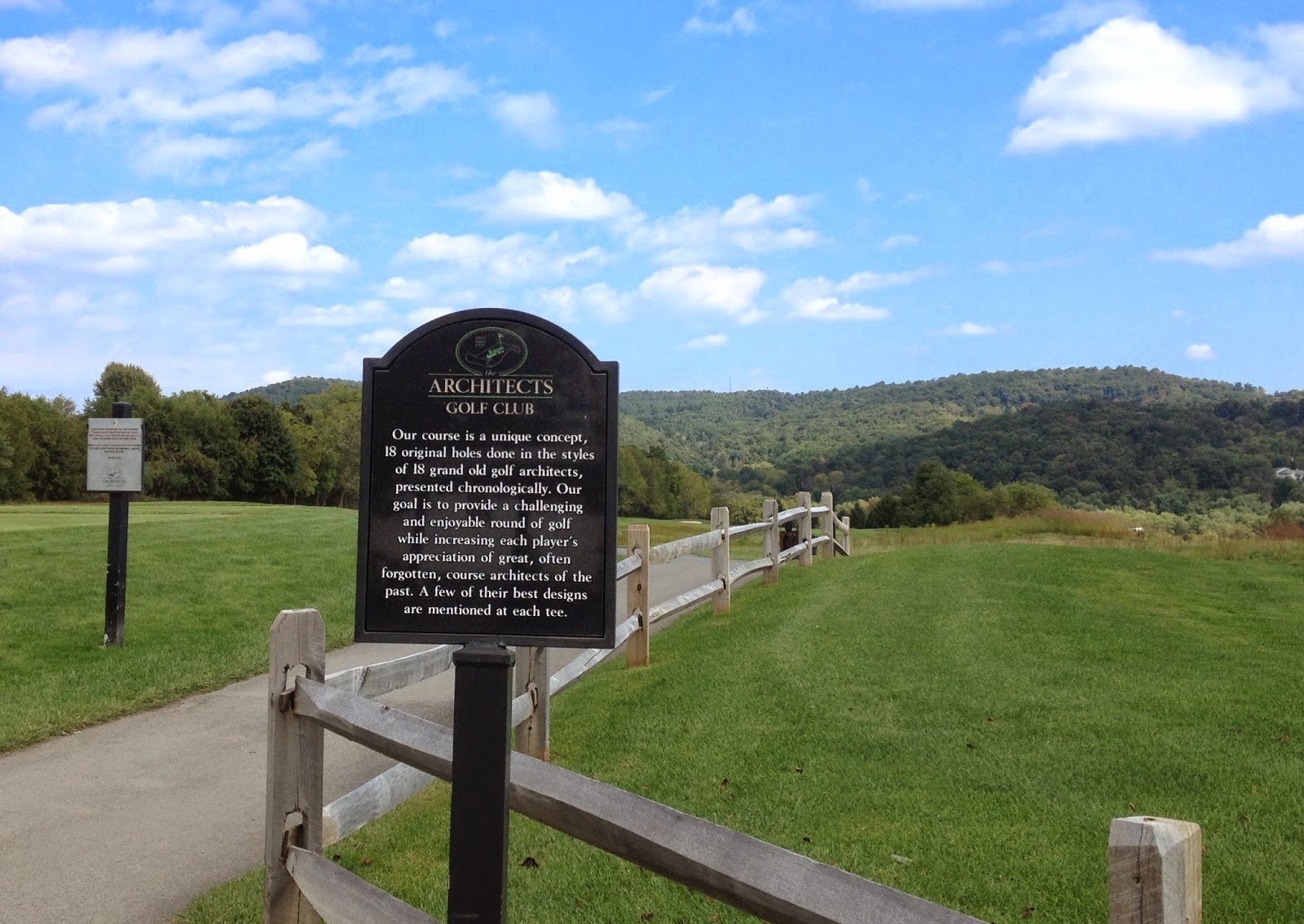 The first thing I noticed about Architects is the expansiveness. Standing by the clubhouse you get a sense of the lay of the land and how spacious it is. No part of the course feels squeezed together, as if whoever designed this place had a lot of room to work with. 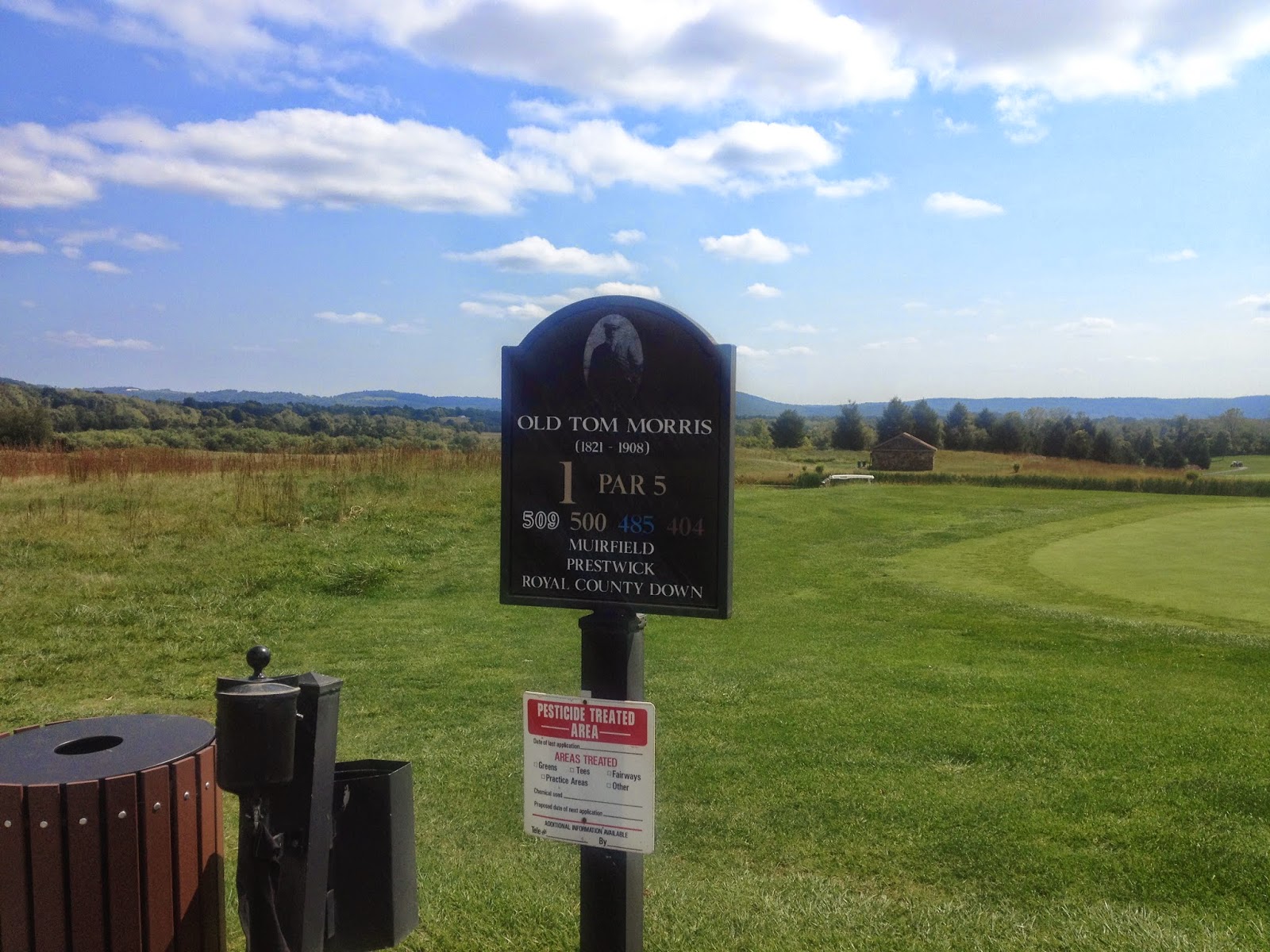 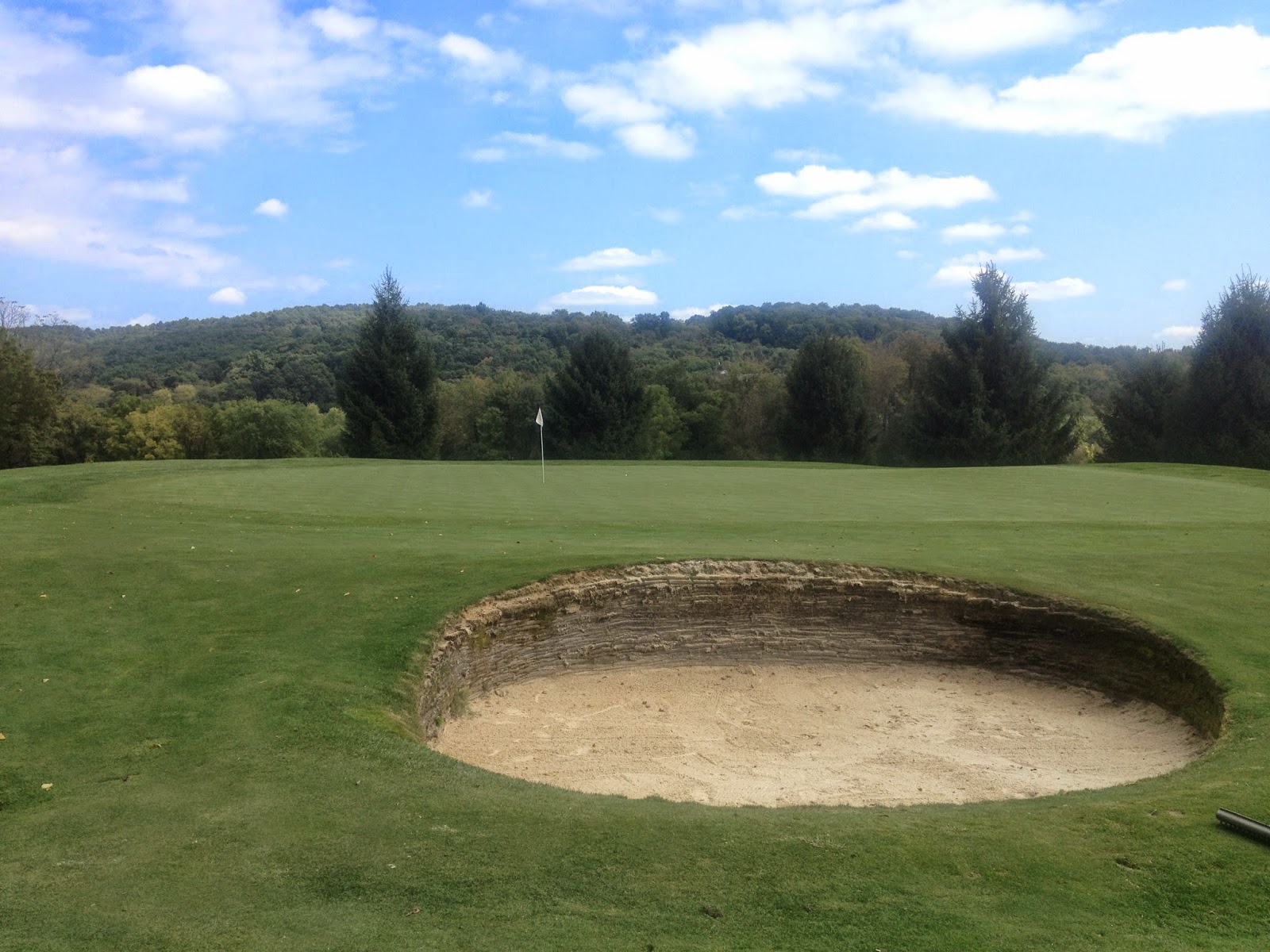 For us city people, making our way down the big first fairway was like taking in a huge breath of fresh air. Ms. L was also invigorated in these surroundings--she was at least as tortured as I was trying to play golf on that stupidly narrow and penal Poconos course of our last outing. 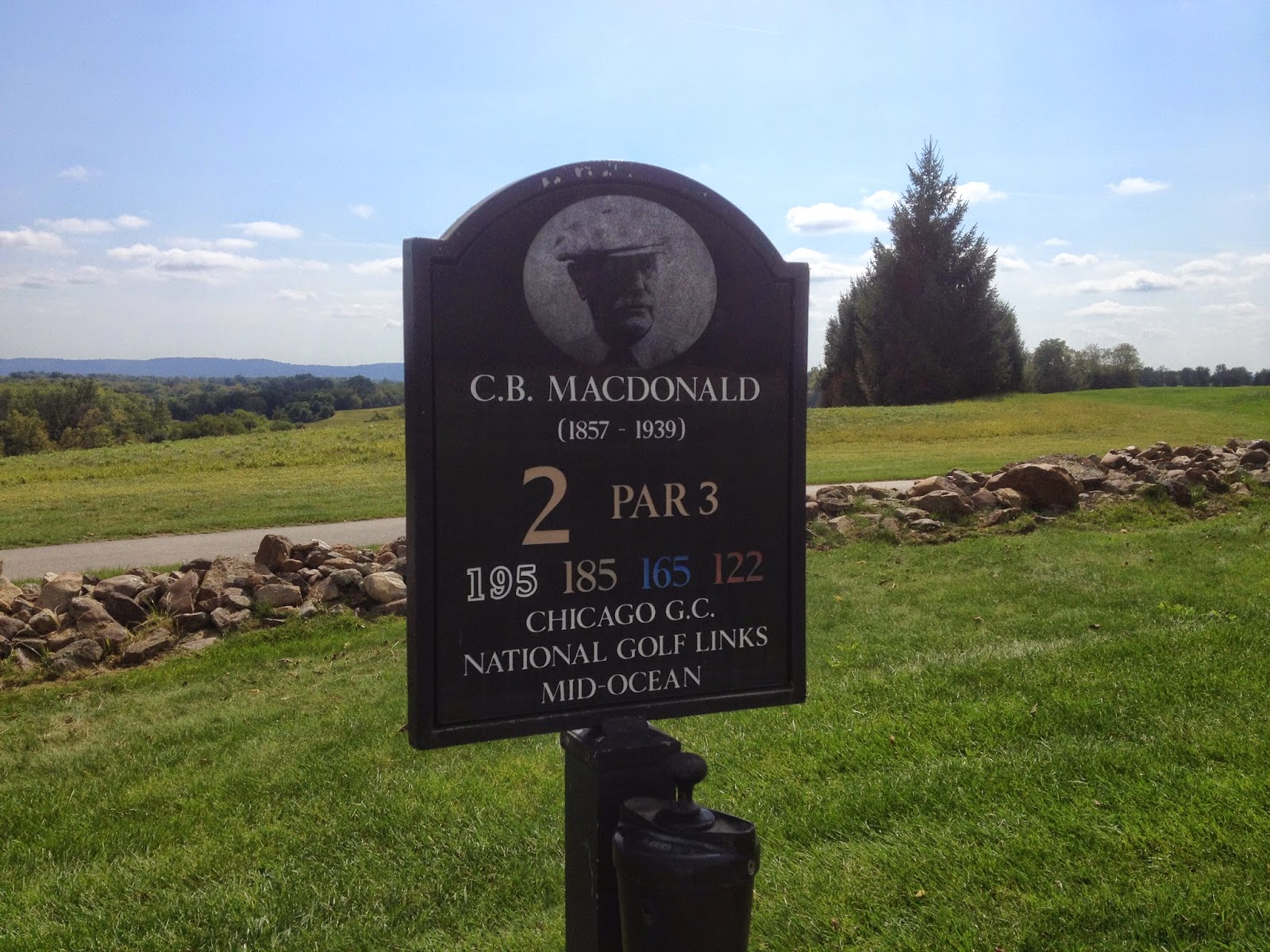 Admittedly I don't know jack squat about some of these dudes. But it's still a fascinating setup they got here and at the very least the whole tribute thing makes for a lot of hole-to-hole variety. 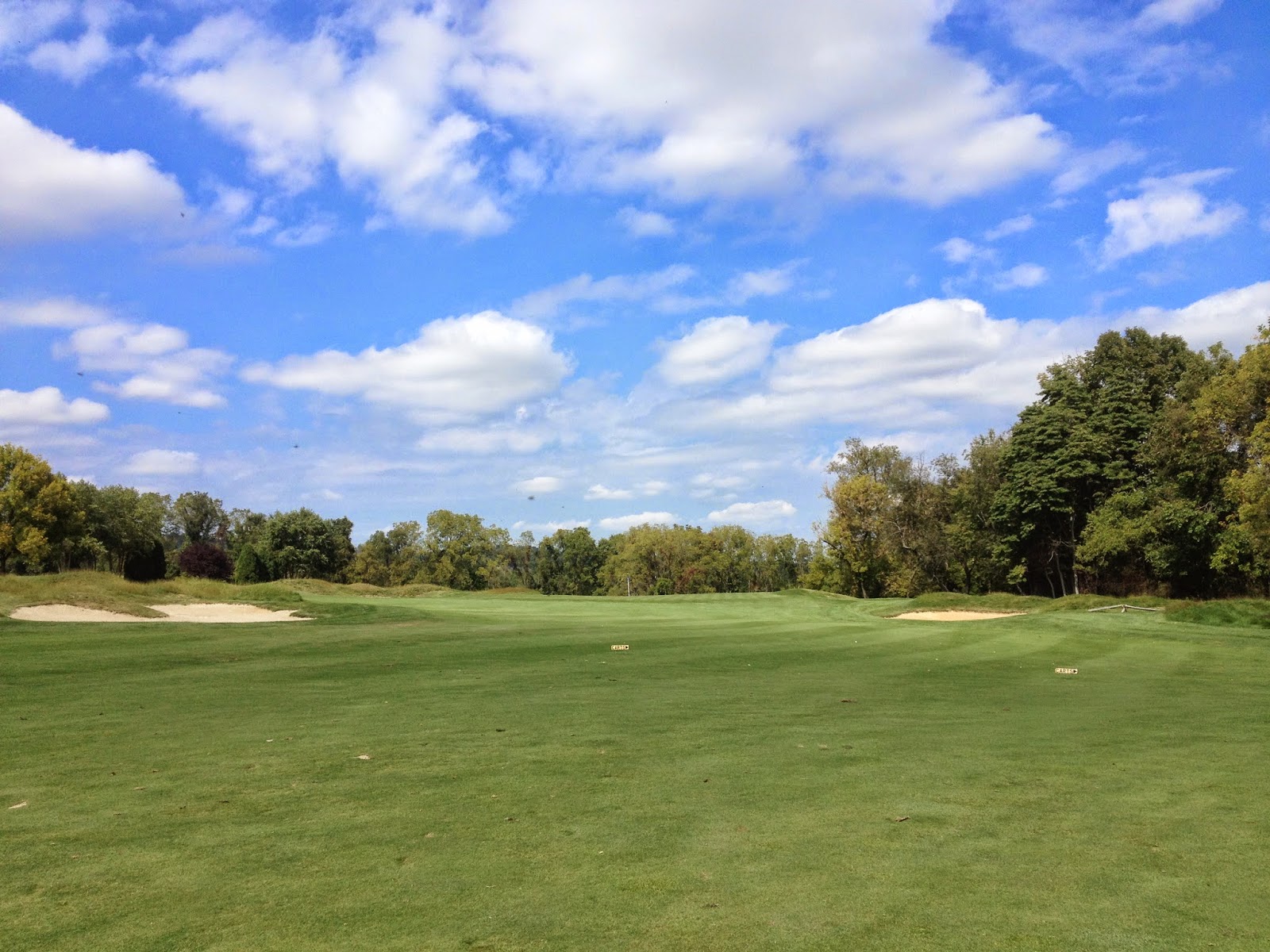 This seems to be more of a second-shot course and that's okay with me. So what if I like a course that's generous in the hips. Nothing wrong with a course being secure in its own difficulty and not feeling the need to gobble up your balls to prove something. 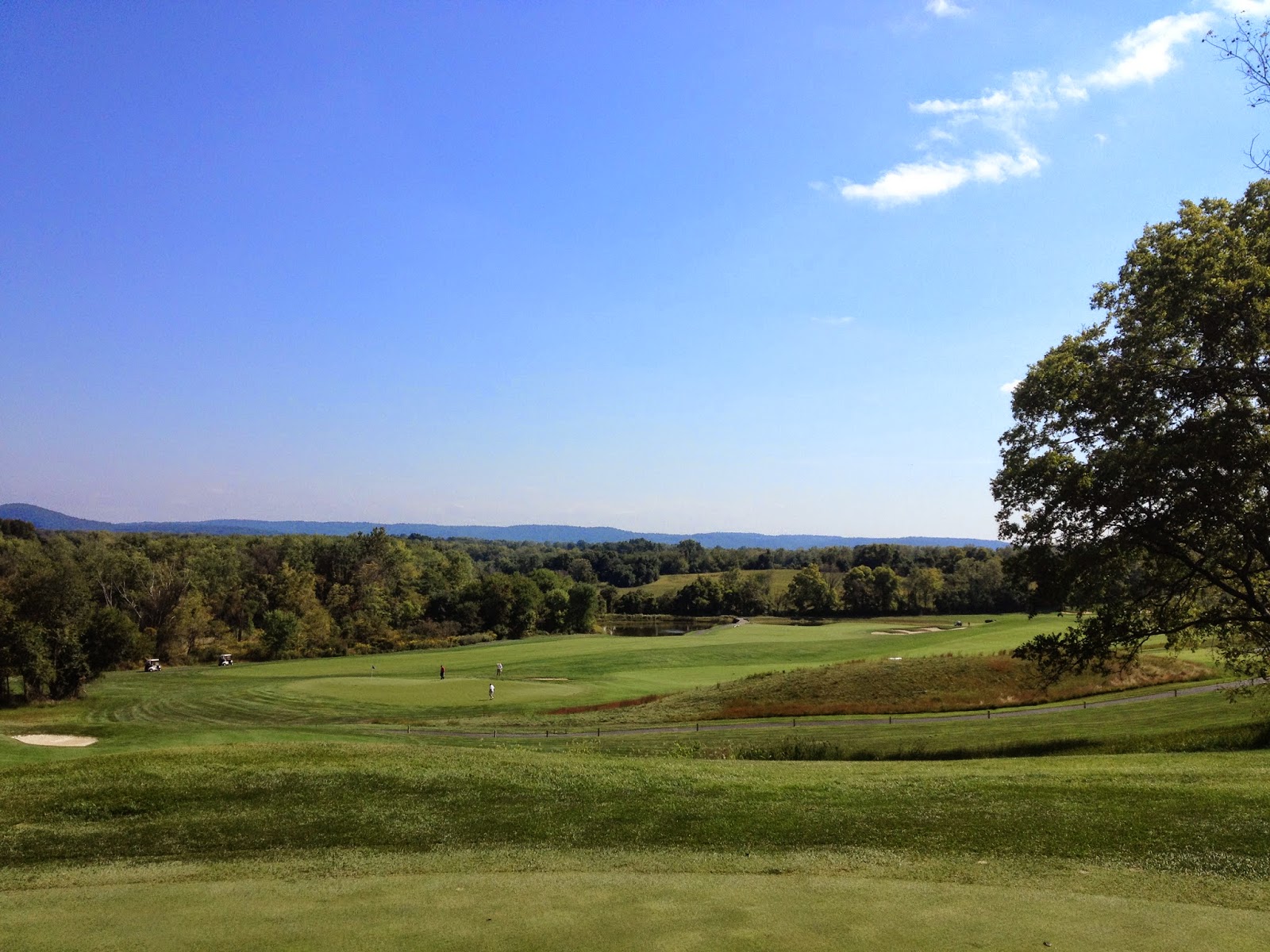 Typically when I'm playing somewhere new I'll retreat to the safety of the middle tees, from where I can hide the driver in shame and fake my way around the course with fairway woods off the tee. I am not super long but there's enough speed to where a little bit of side-spin or clubface error with the driver can cause some big out-of-control misses. 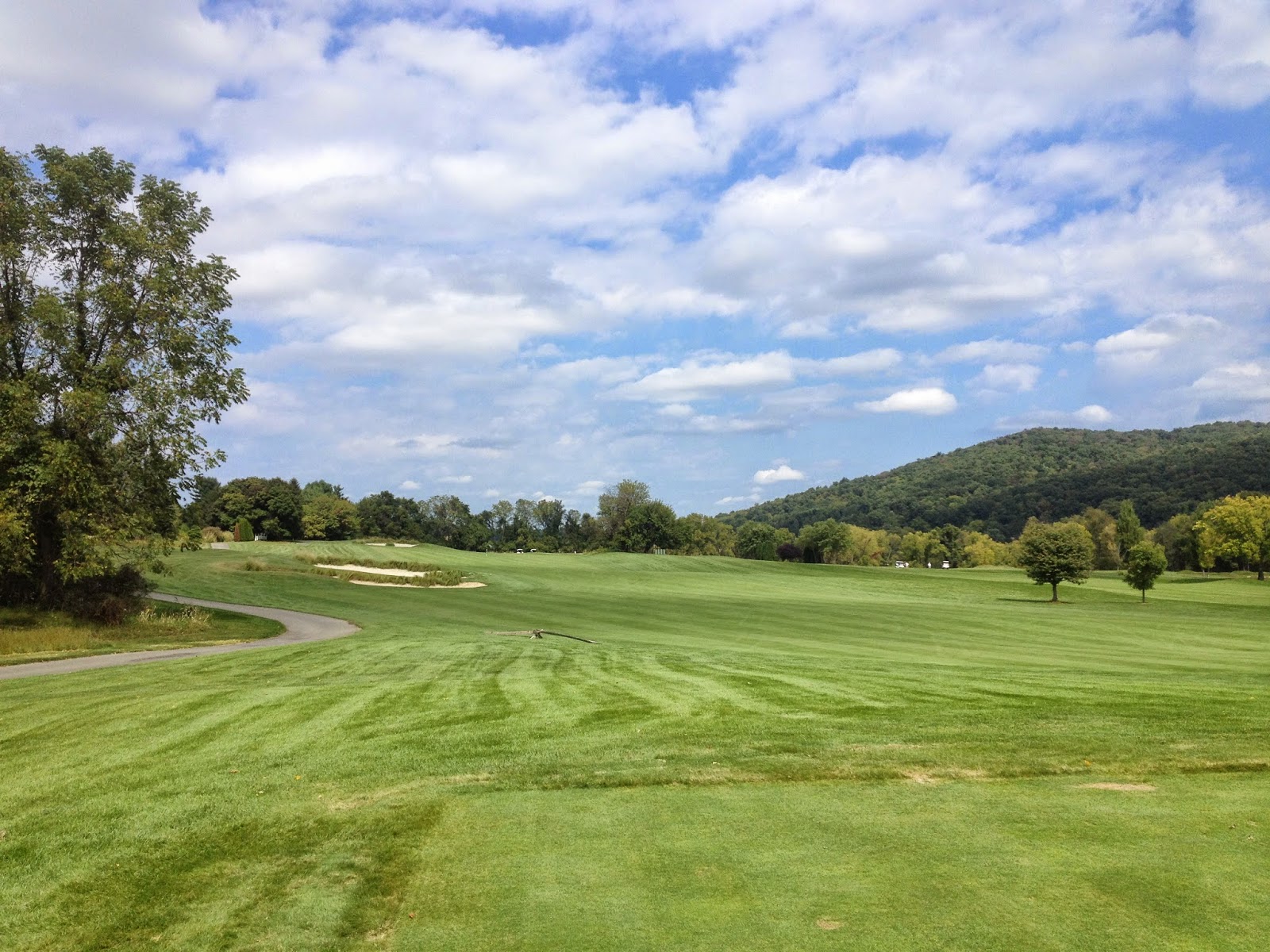 But here at Architects I went out on a limb and teed it up from the 6,532-yard, 126-sloped gold markers. Maybe it was the wide-open feeling that hit me when we first got out of the car; maybe I'm just feeling better lately about hitting the stupid driver. 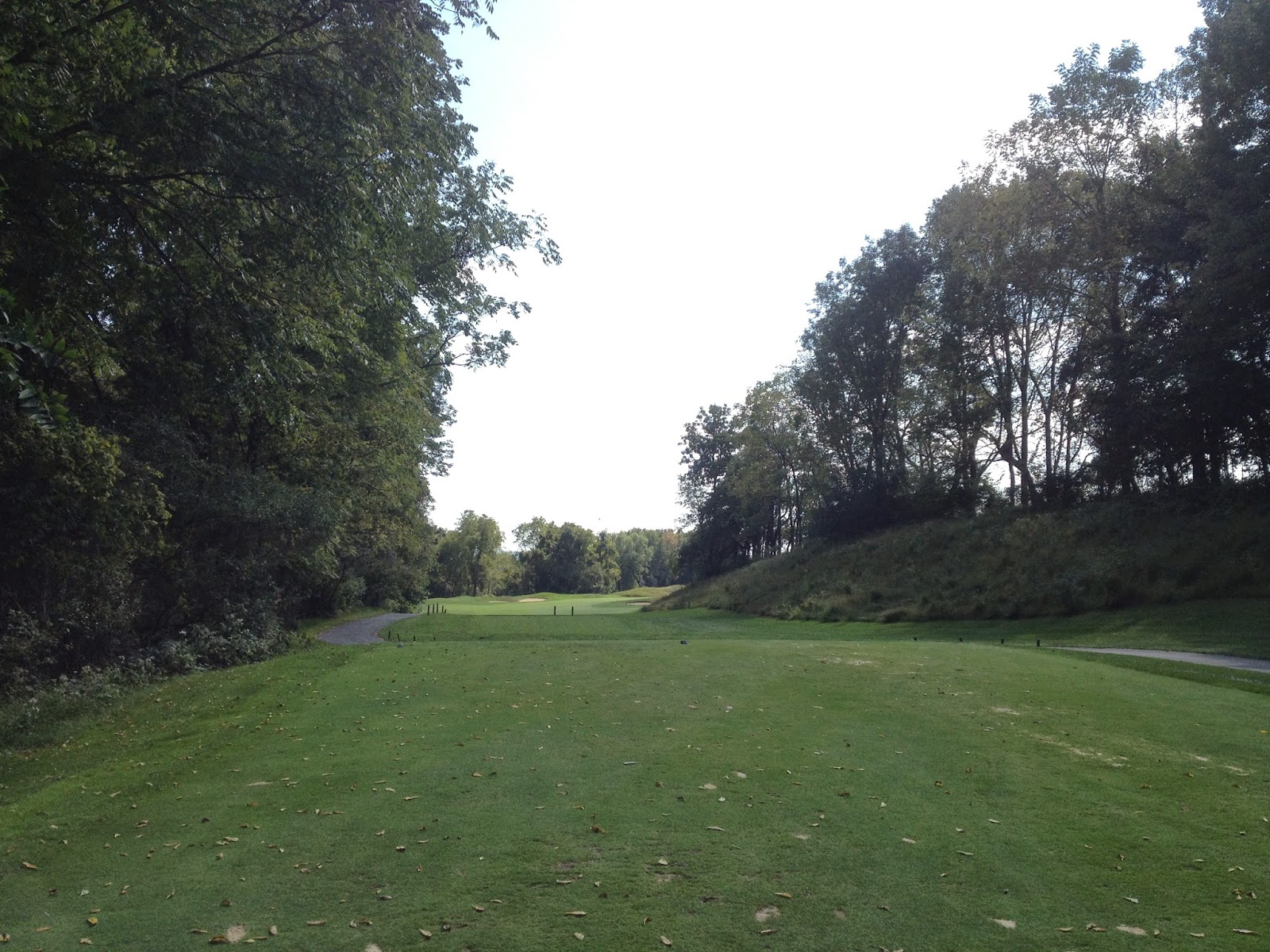 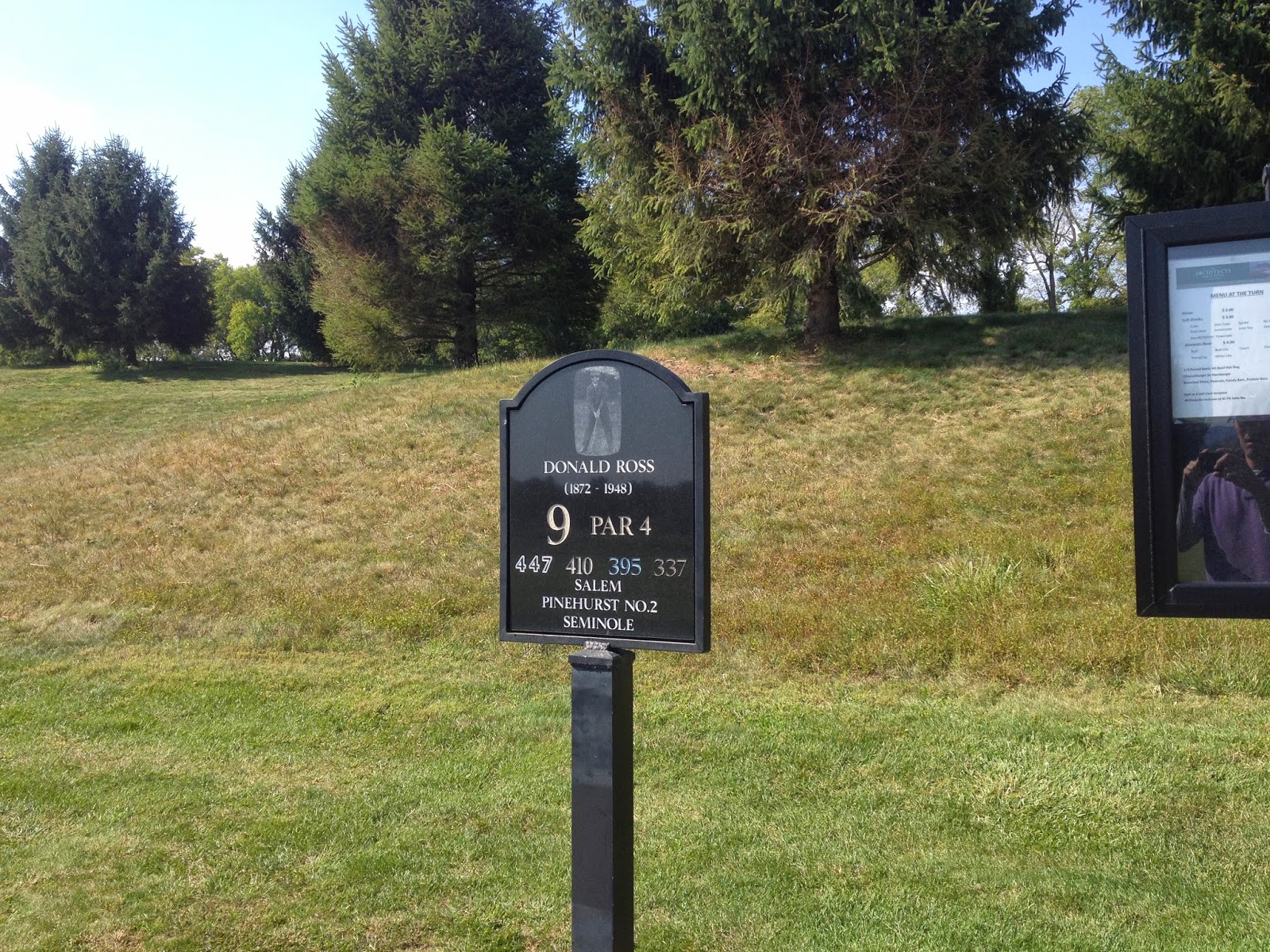 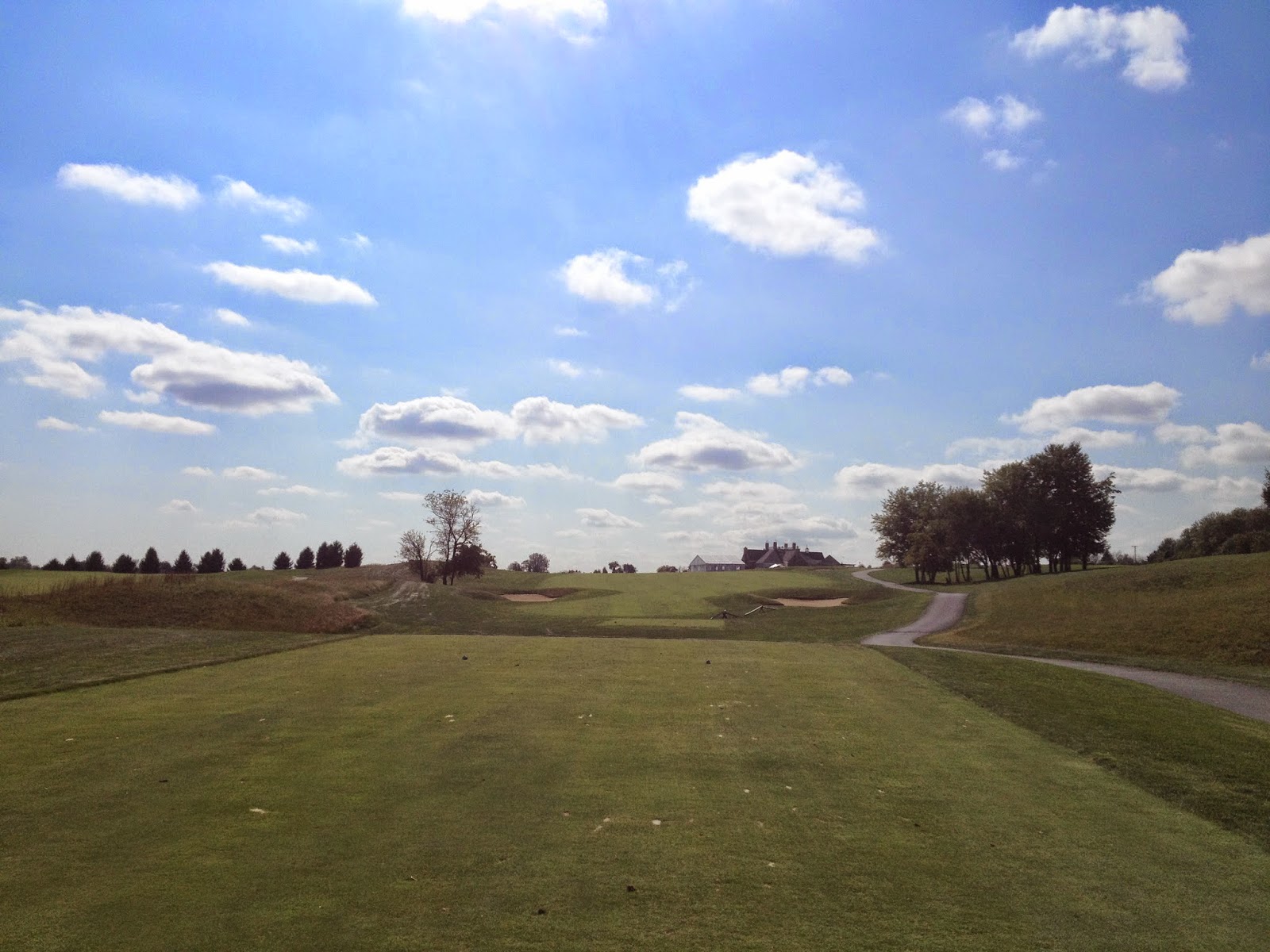 Whatever the reason, good on me for not wussing out. Unloading the driver on ten holes, I hit seven fairways with it. The course isn't tree-lined in the classic sense, but it's no open pasture either--fairways are pinched by rough and/or hemmed in by bunkering. I've bemoaned my troubles with the old 1-wood in past posts and while I'm not exactly swinging in the groove lately, the results today with driver are promising. 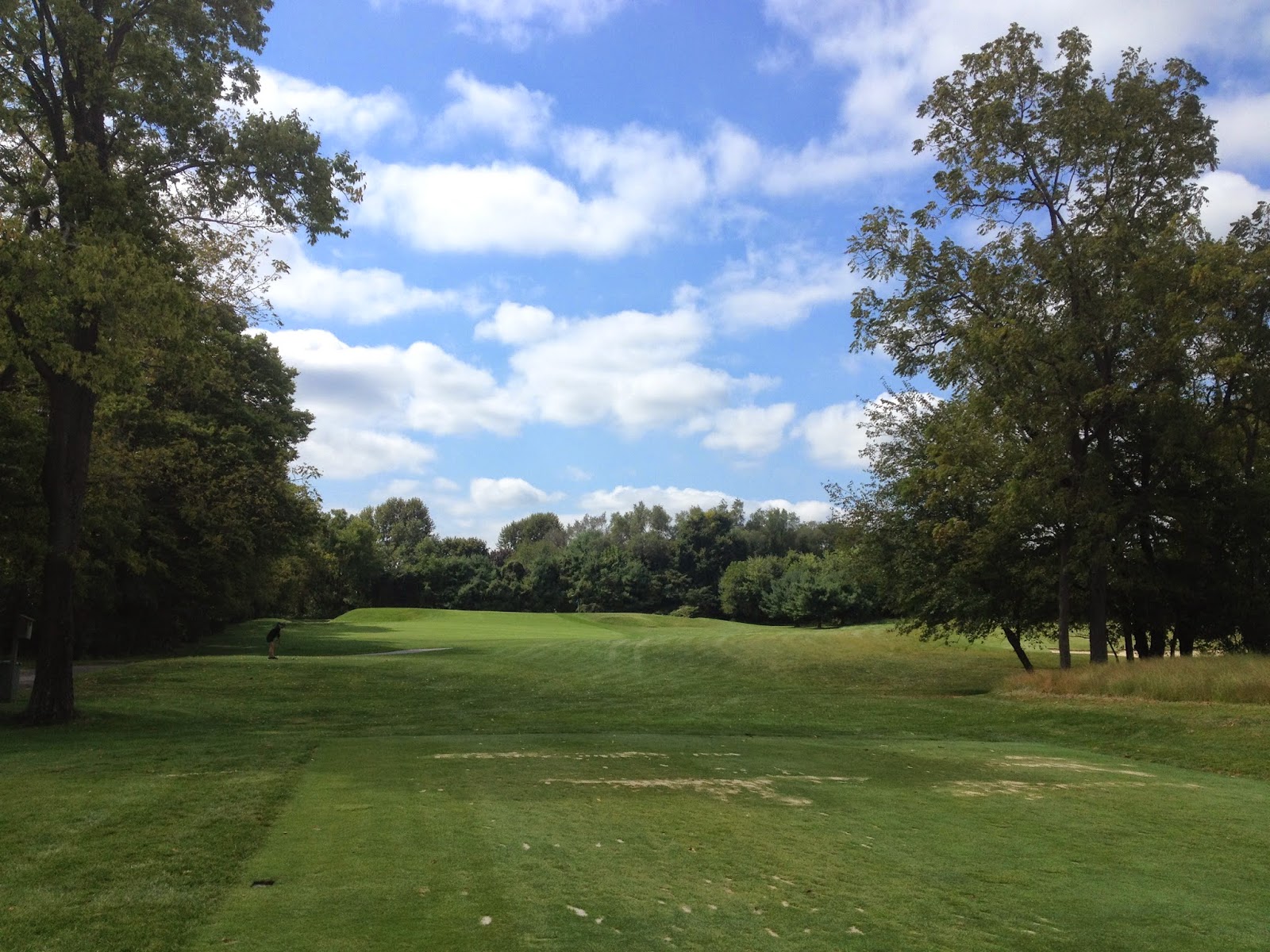 At first I hurried along from shot to shot in my usual grinding way, but I caught myself doing this and decided fuck it, this being a semi-special occasion, let's take a break from the norm. There were some groups ahead, and none behind, so why bother. No, this is a time to relax, take it all in. Go buck wild, scarf down a grilled cheeseburger at the turn. Damn it all to hell, have a can of beer too. (To be fair it was a Miller Lite, barely an alcoholic beverage.) 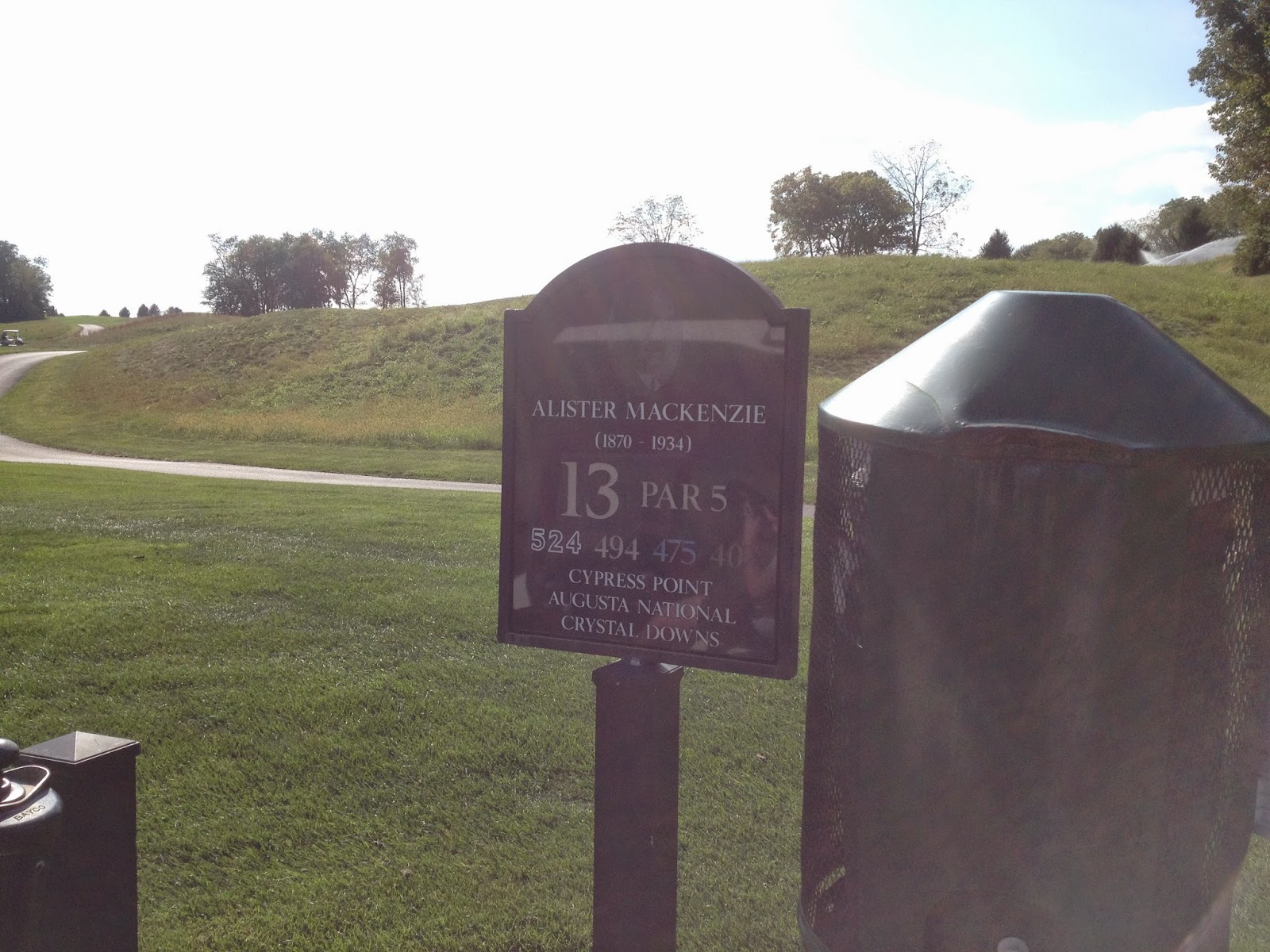 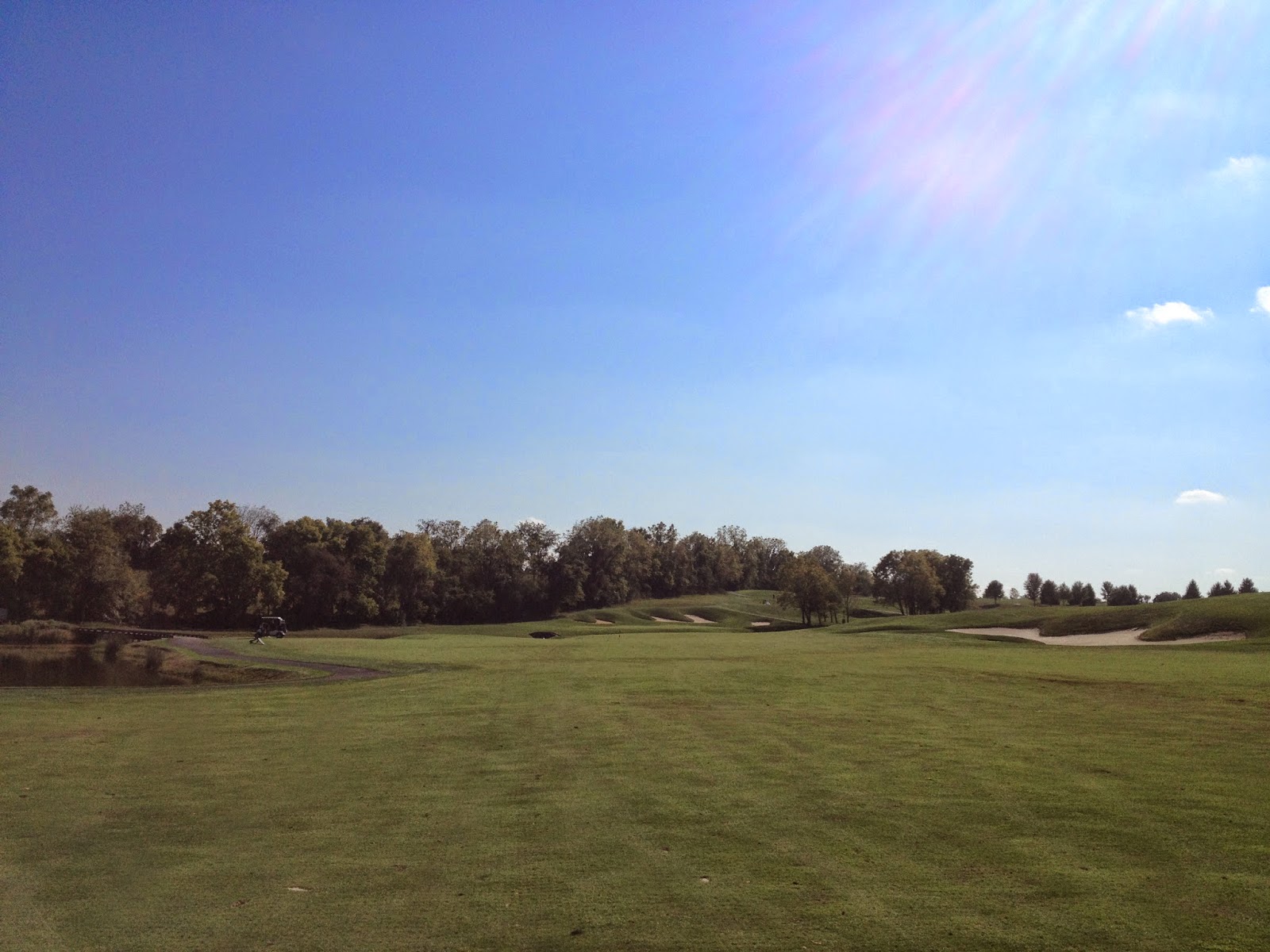 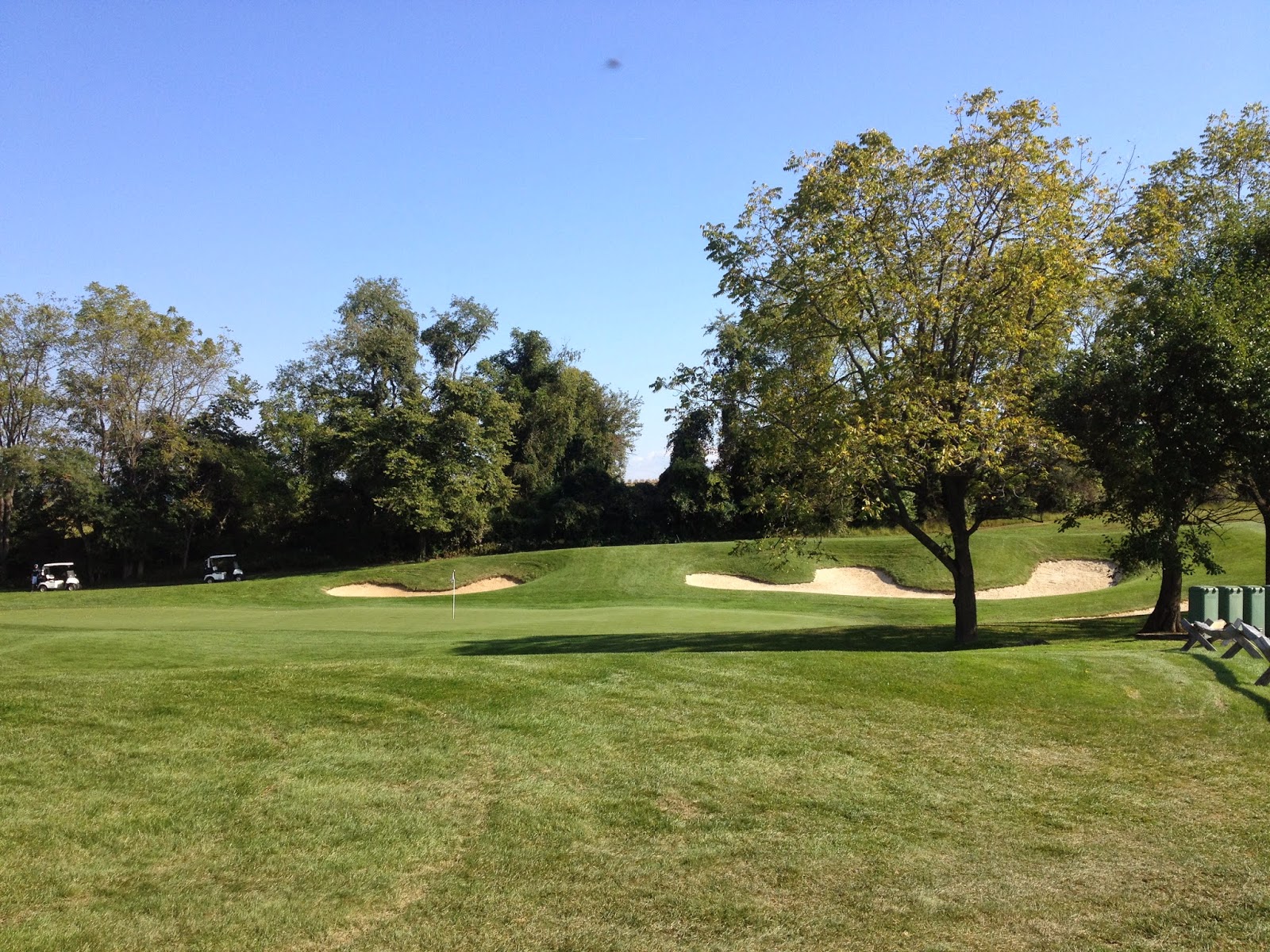 The Mackenzie hole is reminiscent of the 13th at the Augusta, complete with creek guarding a false-fronted green. 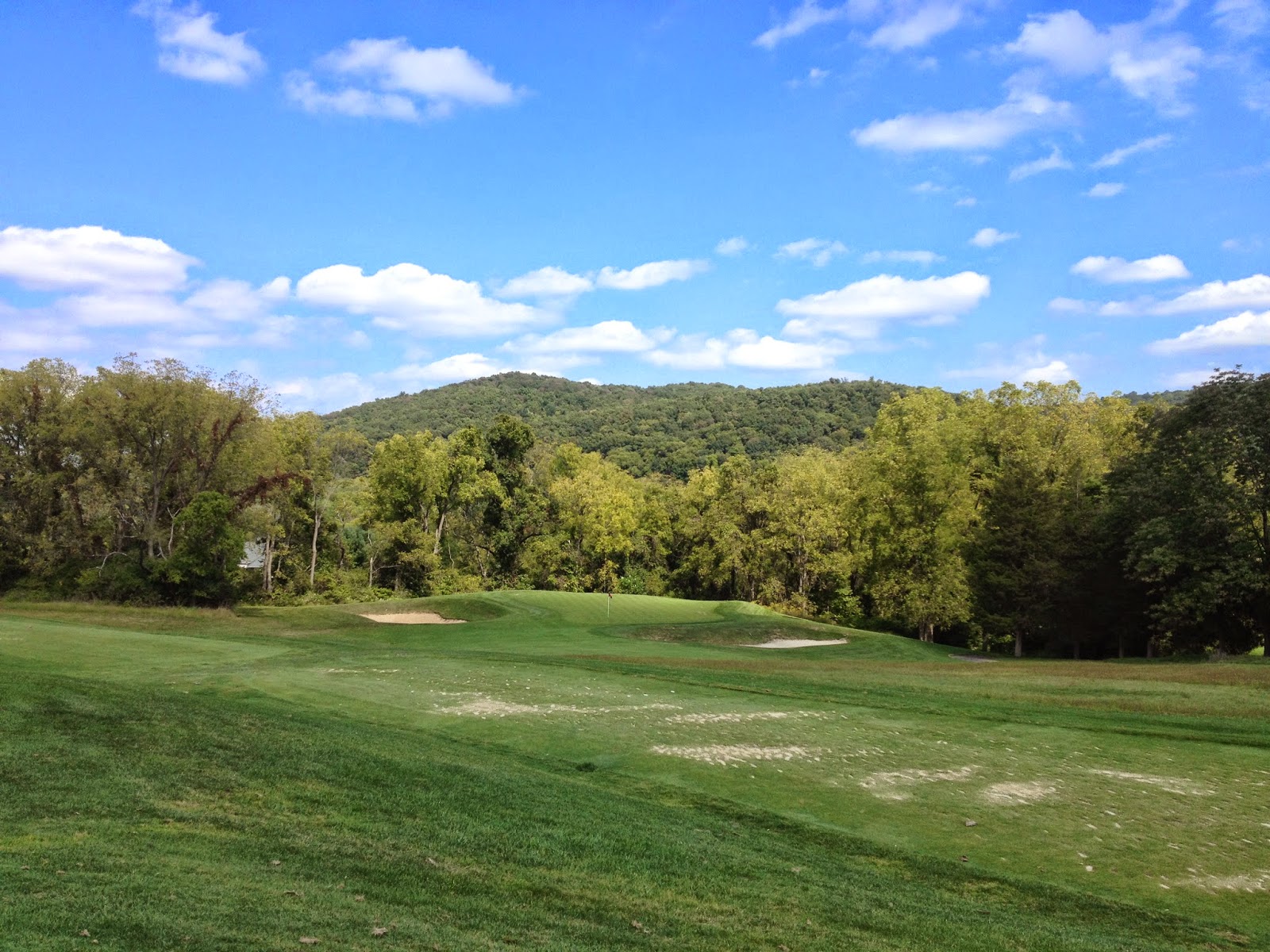 My birthday fell on an ideal day to play golf. The weather was perfect under a partly sunny sky, just right for wearing shorts and not a degree more. Nobody got cross with anyone else on the course, nobody was rushed from behind, or gridlocked from the front. A fast-playing twosome approached us at the turn, I waved to them to play through, and they did so with no fuss. Just another day in the non-asshole part of the U.S.A. I guess. 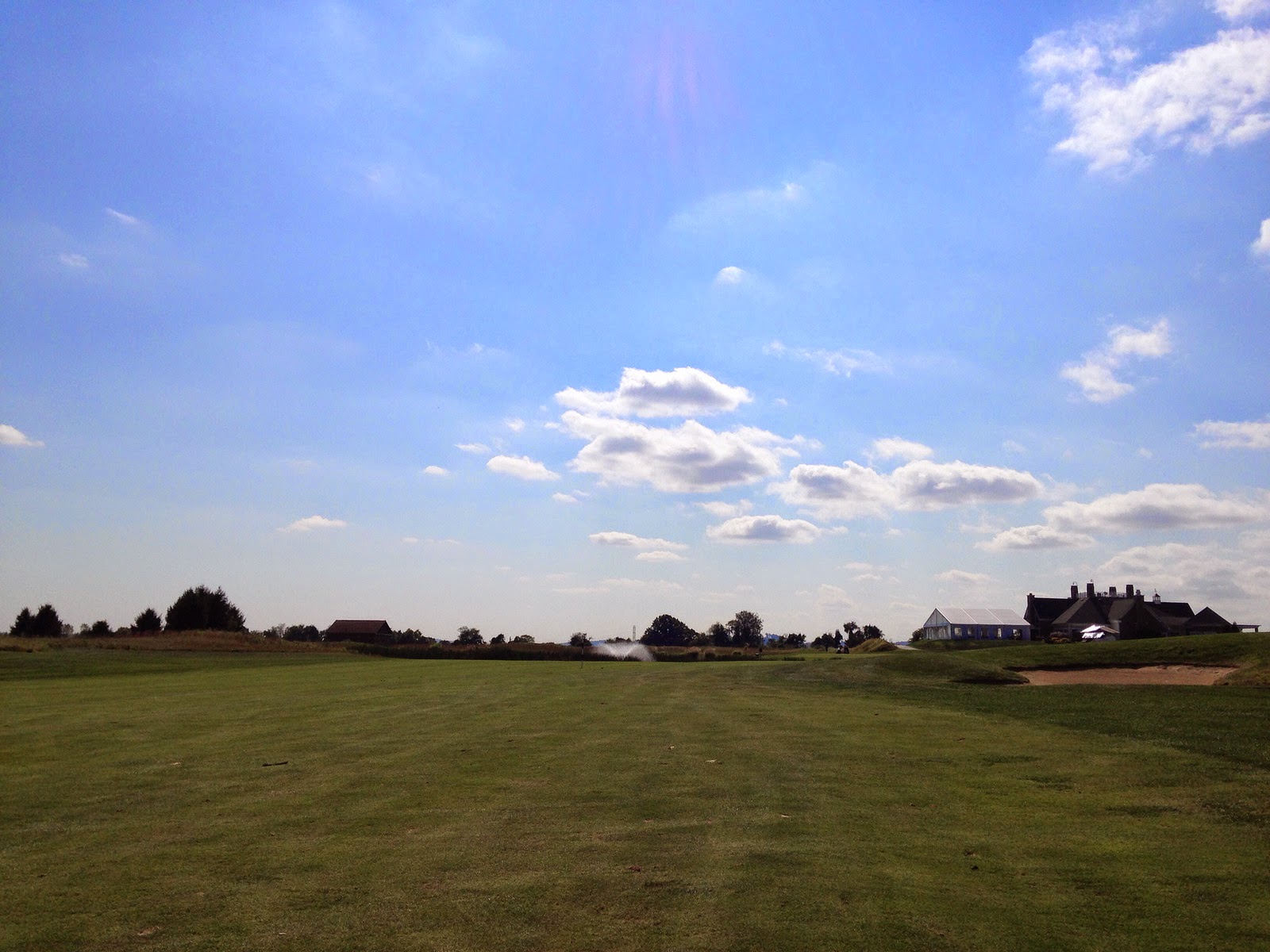 The course layout really agreed with me and I played decent in spots. Good play seemed to be well received here. A couple of holes got away from me but the rest of it was a lot of fun. A pair of sweet up and downs from deep bunkers, some plucky driver shots in the face of trouble, a few crazy long putts holed. I ended up with 87, pretty ho-hum but hey, I was satisfied enough, unlike on last year's so-called birthday in which I was knocked around a diabolical Crystal Springs course and barely avoided triple digits. 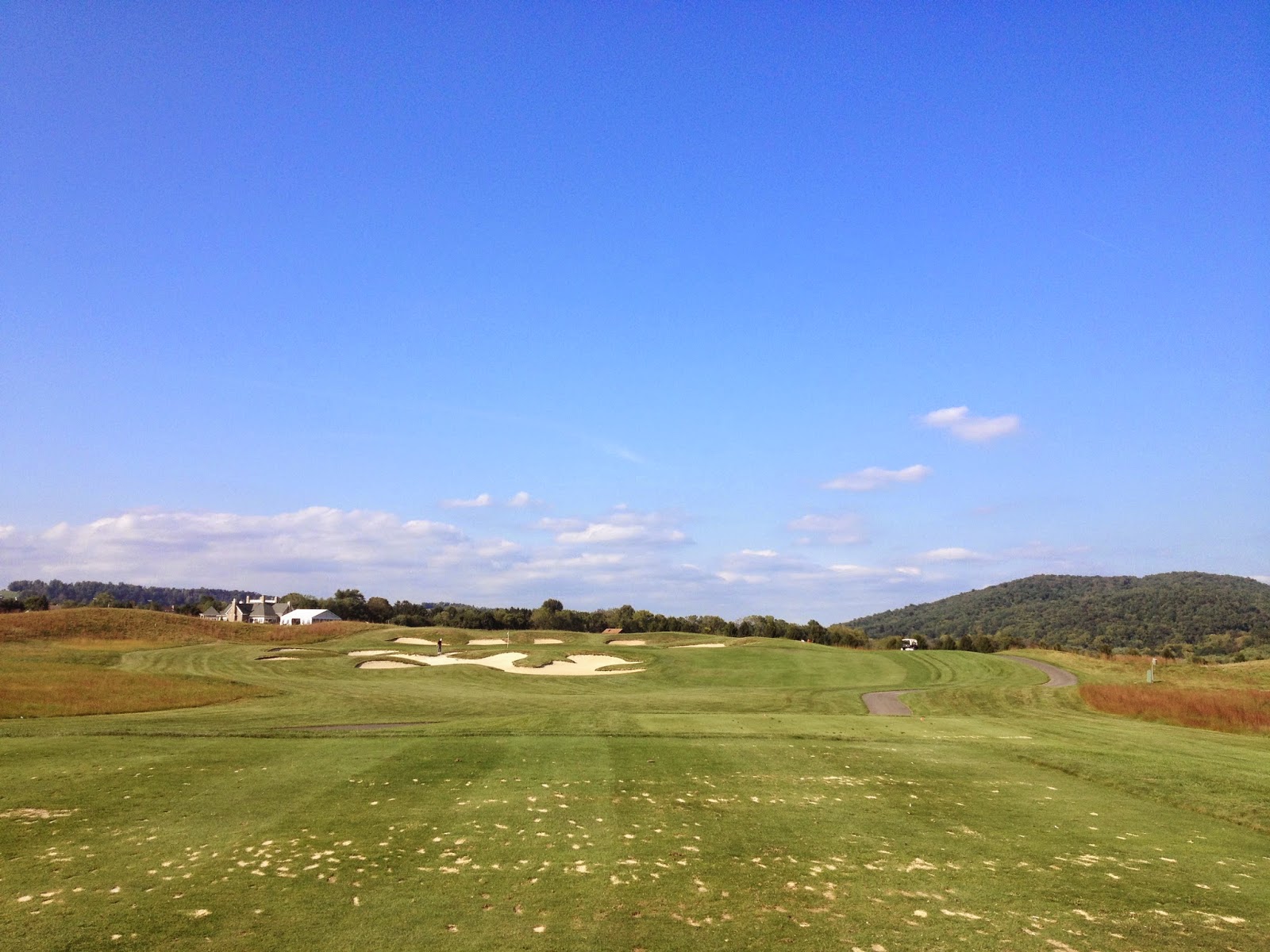 Things got a bit weary around the 14th hole thanks to a trio of really long, punishing par 4's. But I hung in there and earned a memorable finish. The 17th is a dramatic-looking long-iron par 3. It reminded me of the 17th at Bethpage Black with all the in-your-face bunkering and the seeming lack of a place to put a ball. Summoning some energy I hit a nice 4-iron that landed fairly soft and finished pin high. Okay, so I three-putted. 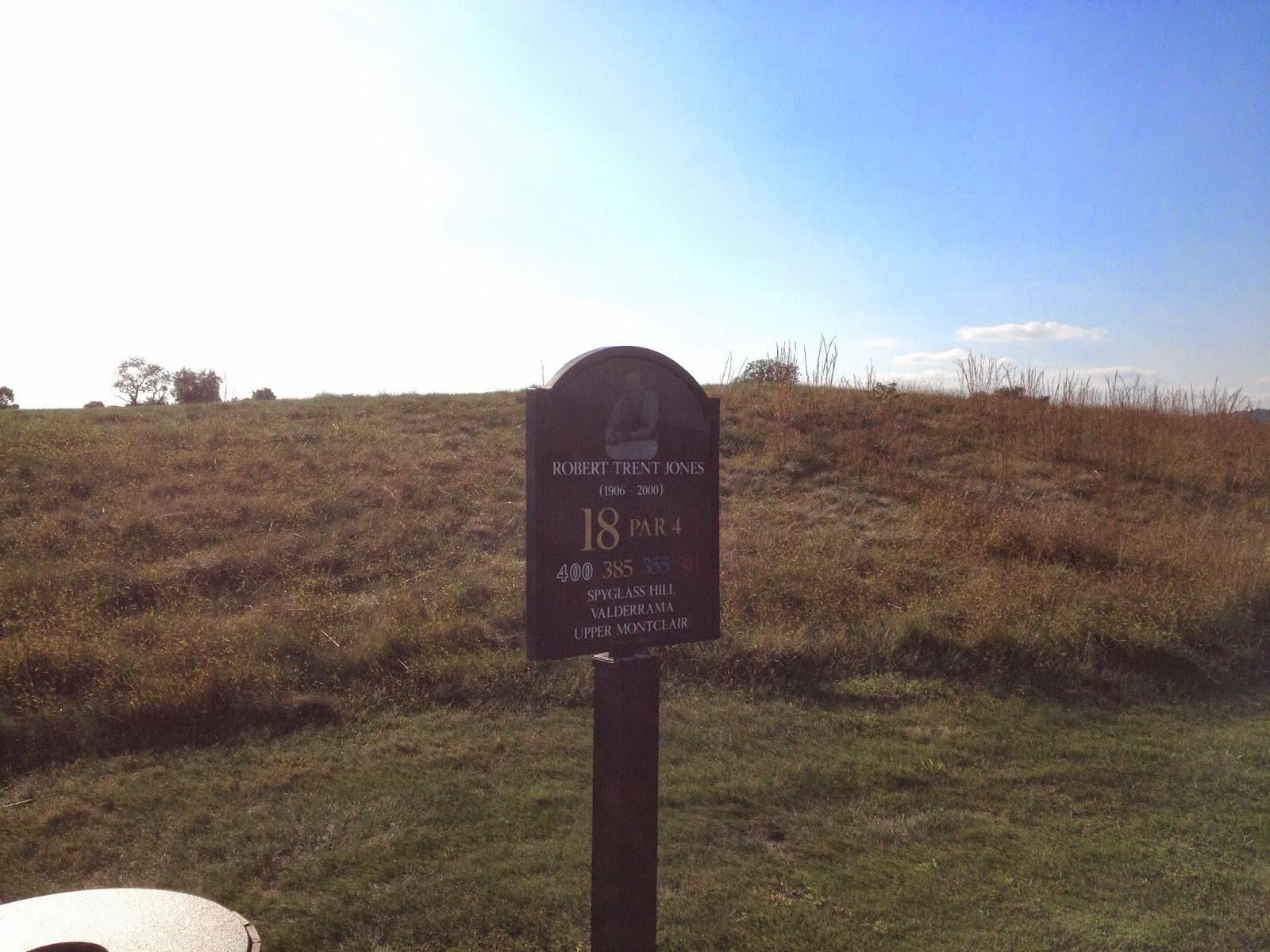 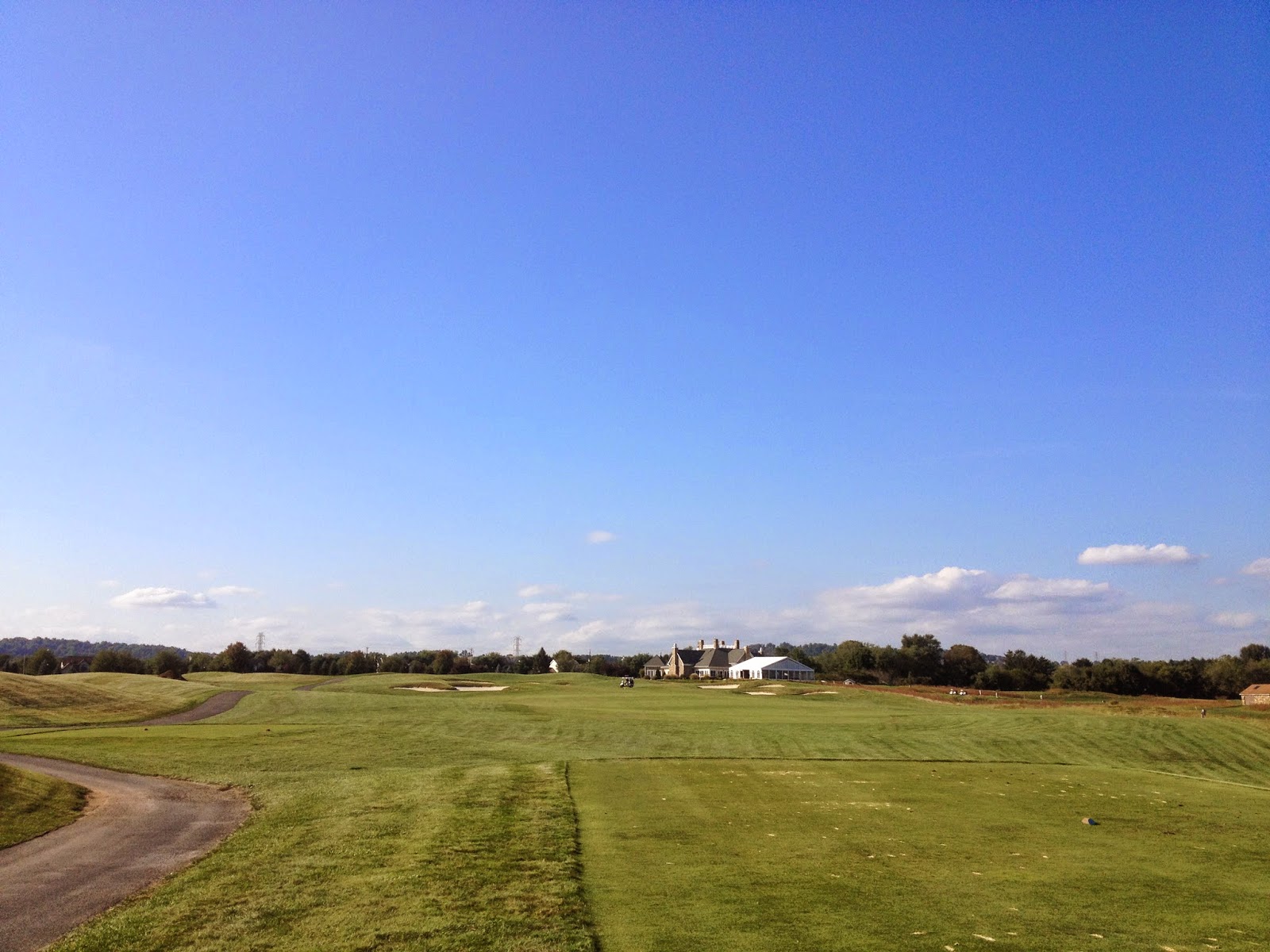 The final hole presents a narrow landing surrounded by plenty of sand. I was so glad to pipe it down the middle, then follow that with a wedge over top of the flag. Left with about thirty feet of downhill and a foot and half of right-to-left, I whacked the putt about fifteen feet too hard. But somehow it slammed into dead center of the back of the cup, bounced a few inches upward before dropping straight in, a heart-stoppingly good finish to a really enjoyable round.
Posted by Legitimate Golf at 9:43 PM