Penalized in the Poconos 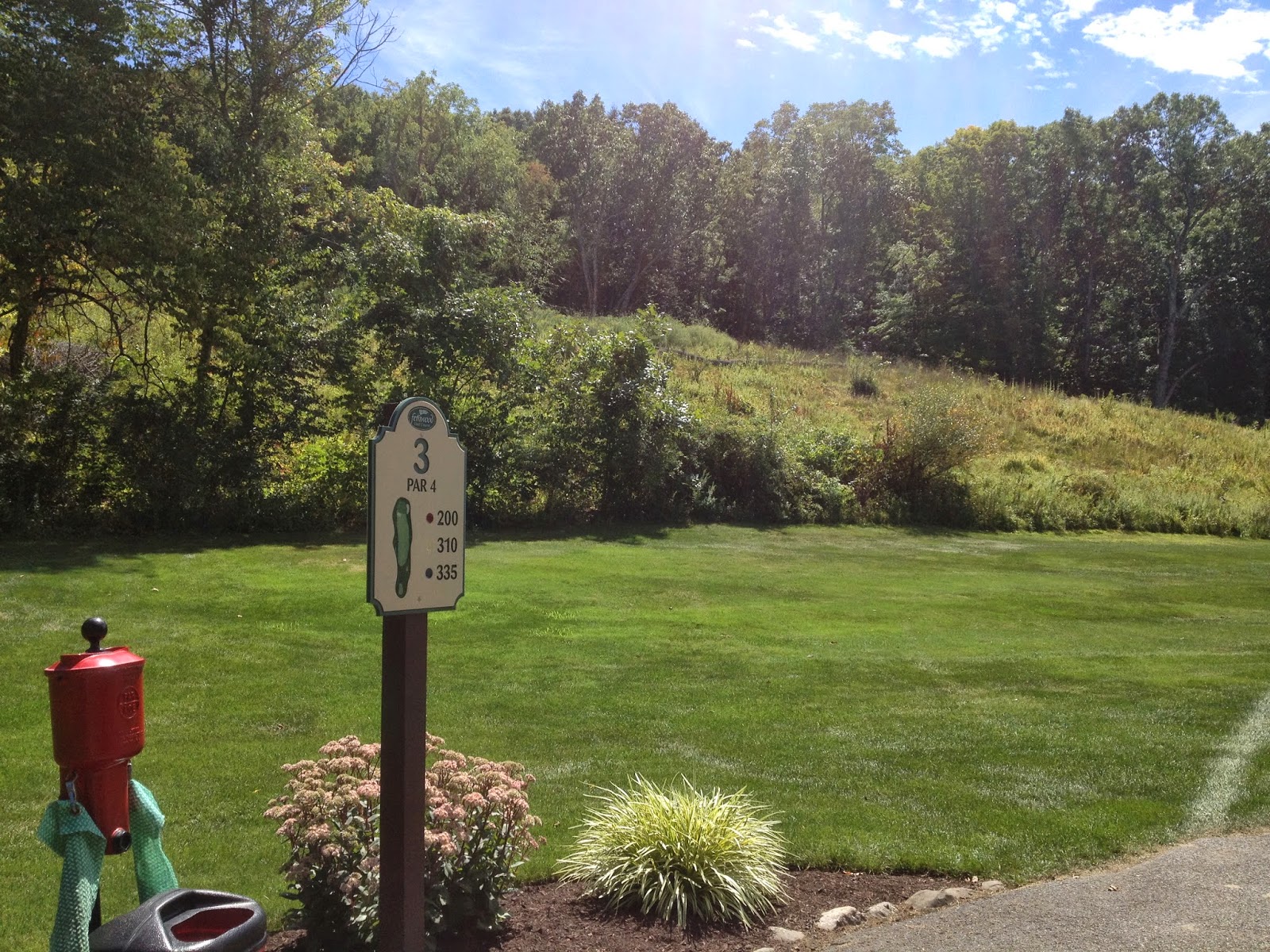 The Pocono Mountains are located in northeast Pennsylvania, about an hour and a half from New York City.

Around here the name Poconos is generally synonymous with alpine fun and good times, located within a sensible distance of the big cities. As a non-native New Yorker I had always assumed that it was a place to be. A destination if you will.


But if this latest round is any indication, it is not exactly that. From what I saw it is a rather utilitarian getaway, low on the rural charm. Kind of a bargain-bin option for nearby city people in need of retreat. It's no Vermont, put it that way. 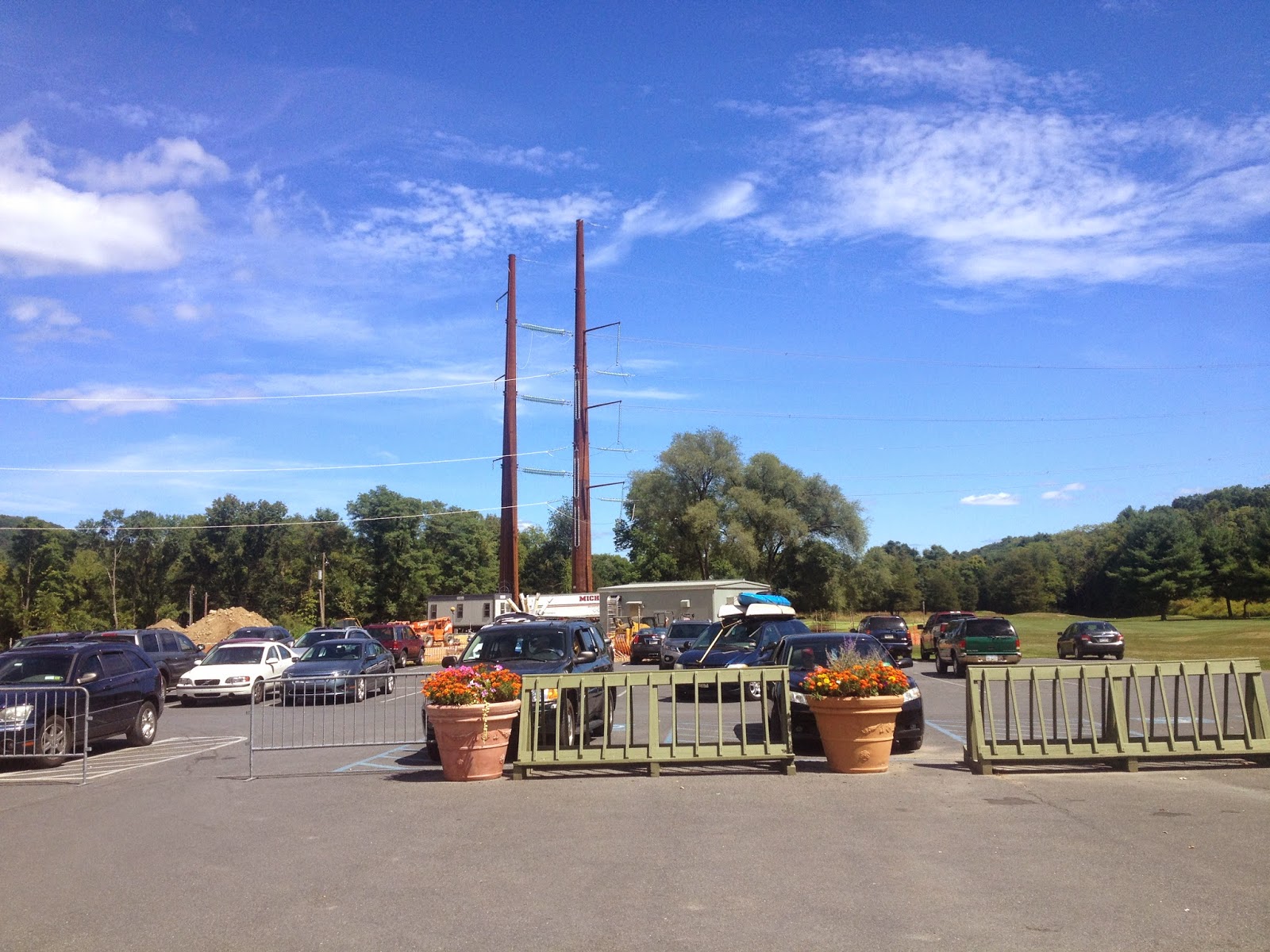 From my online searching, Fernwood seemed like a nice enough place to play. The yardage was suitable for both myself and Ms. Legit. A glance at some customer reviews suggested good conditions and pace of play. 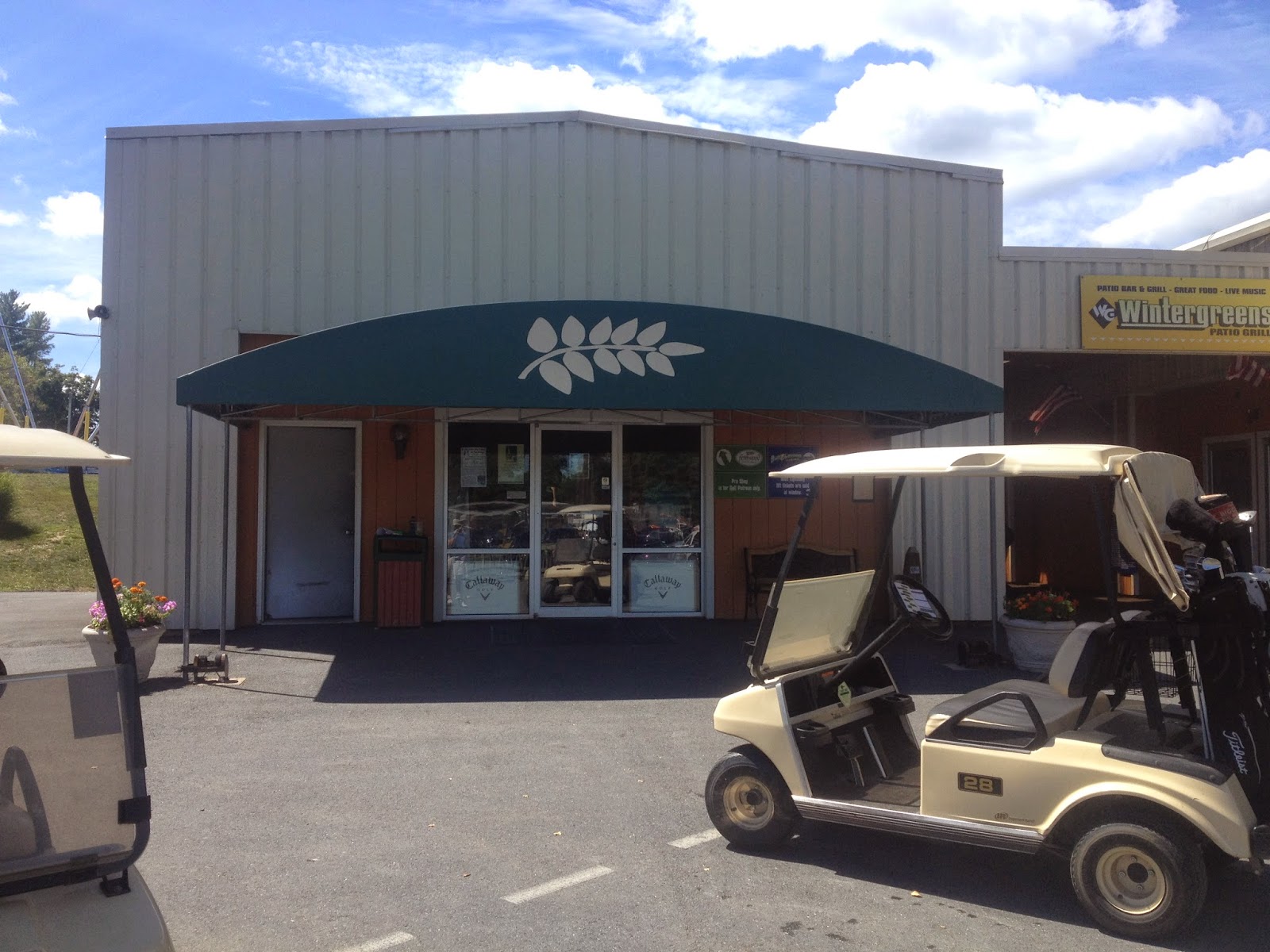 Pulling into the lot I became a little concerned--the huge power lines and corrugated-steel clubhouse were a bit worrisome. 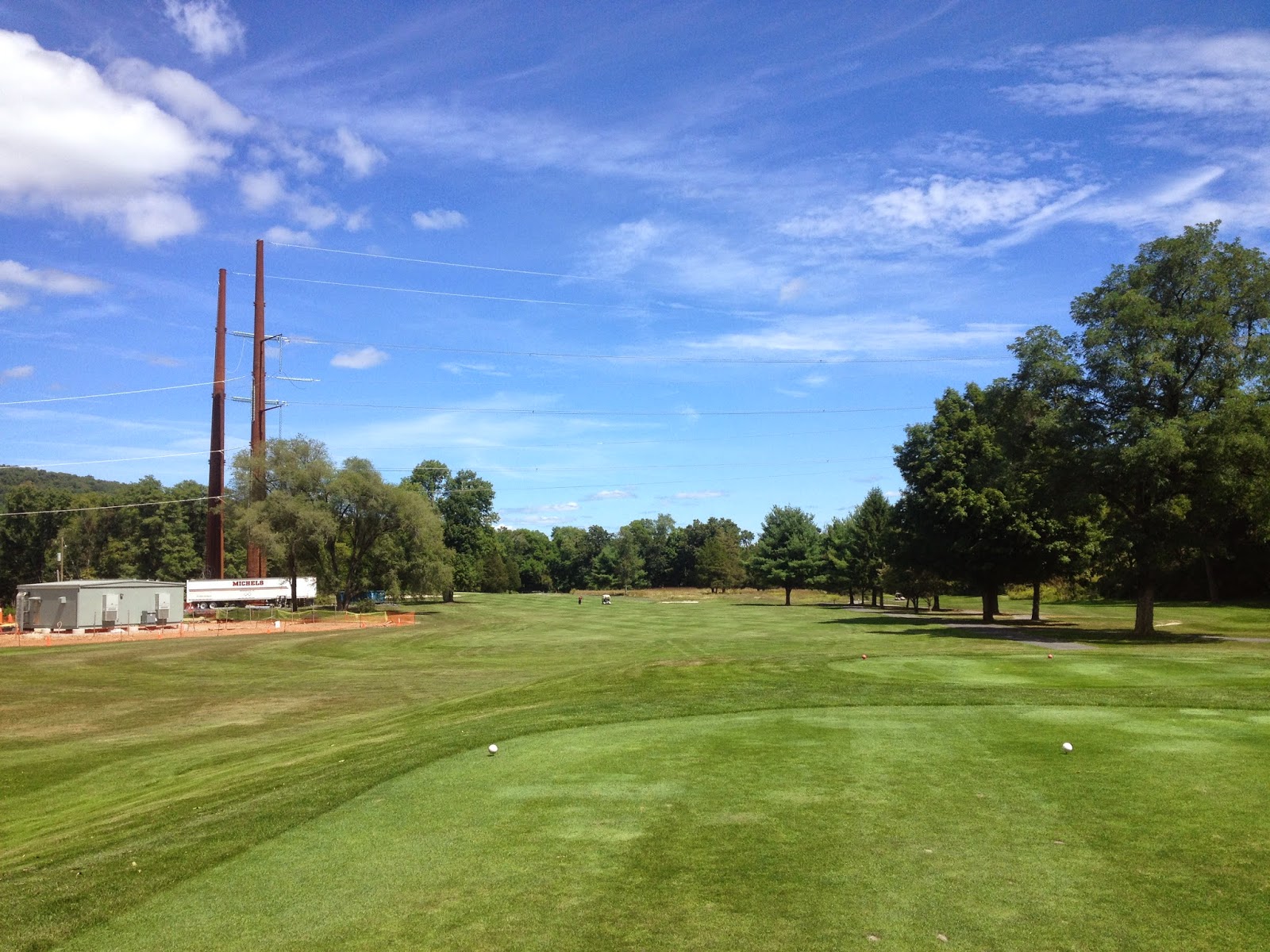 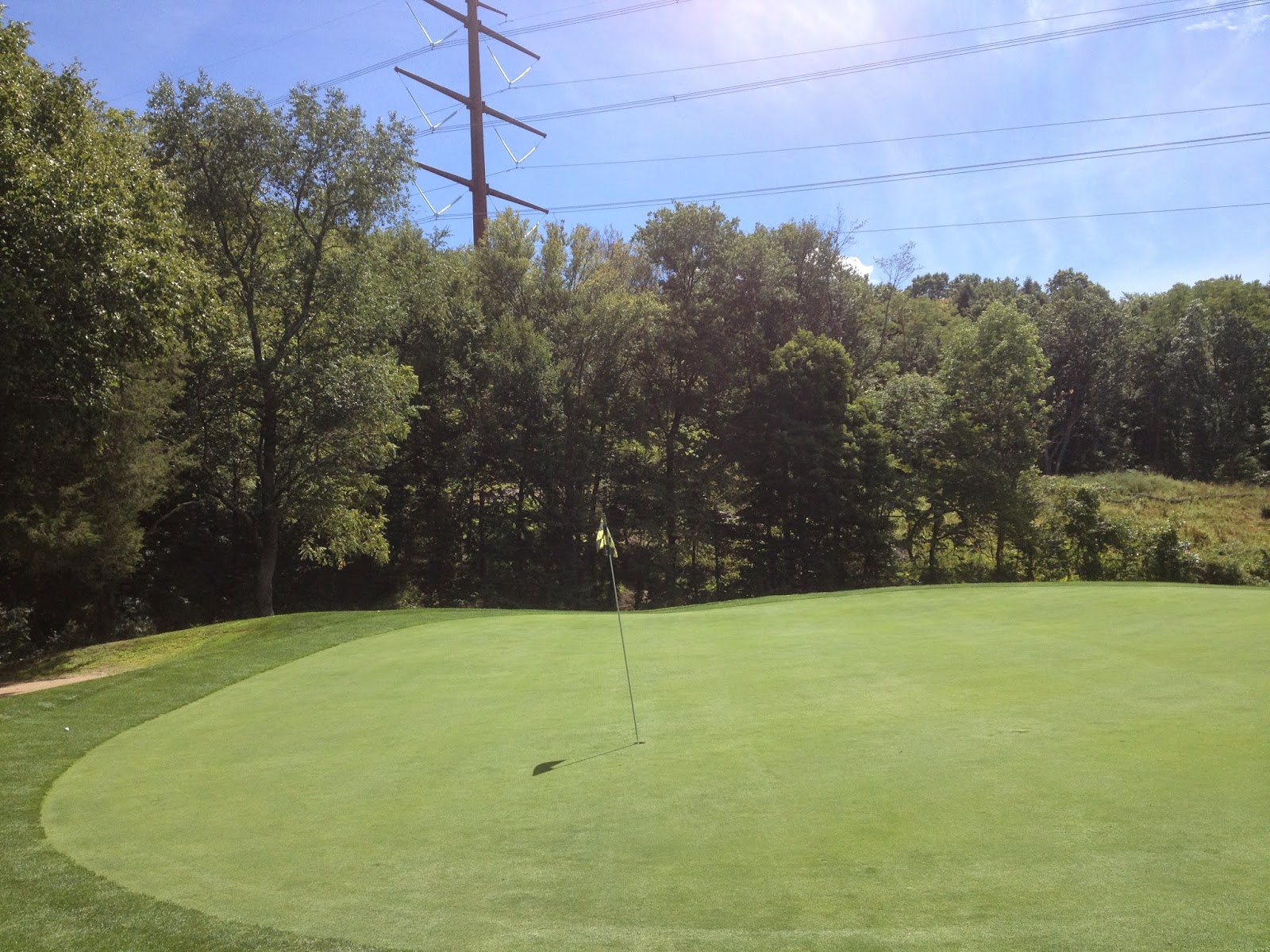 The first three holes were nice enough--spacious and competently laid out. I played them in even par and then looked forward to perhaps another solid round of road-golf. 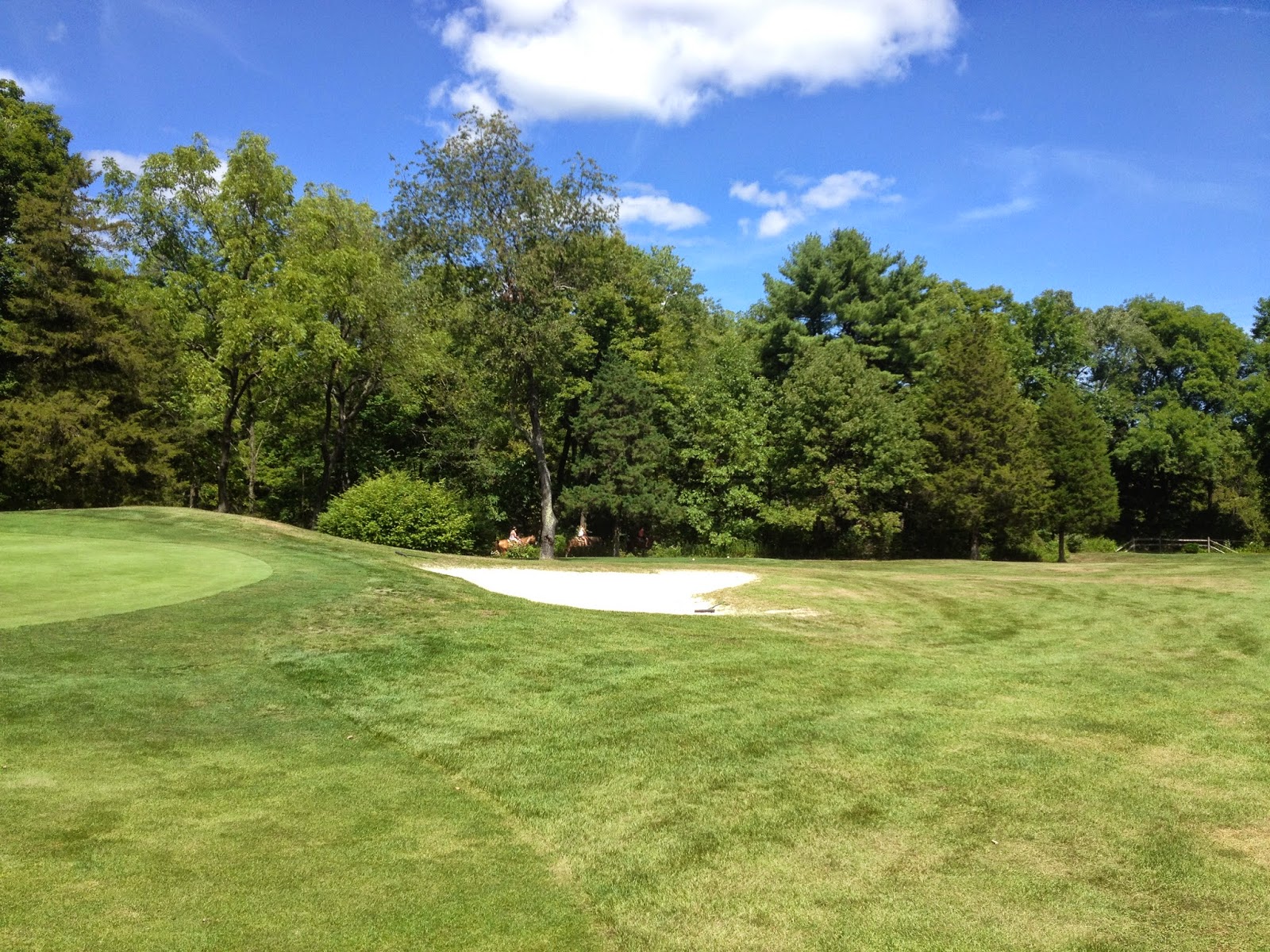 Horseback trail-riding alongside a golf course is one of the many activities available here in the Poconos. 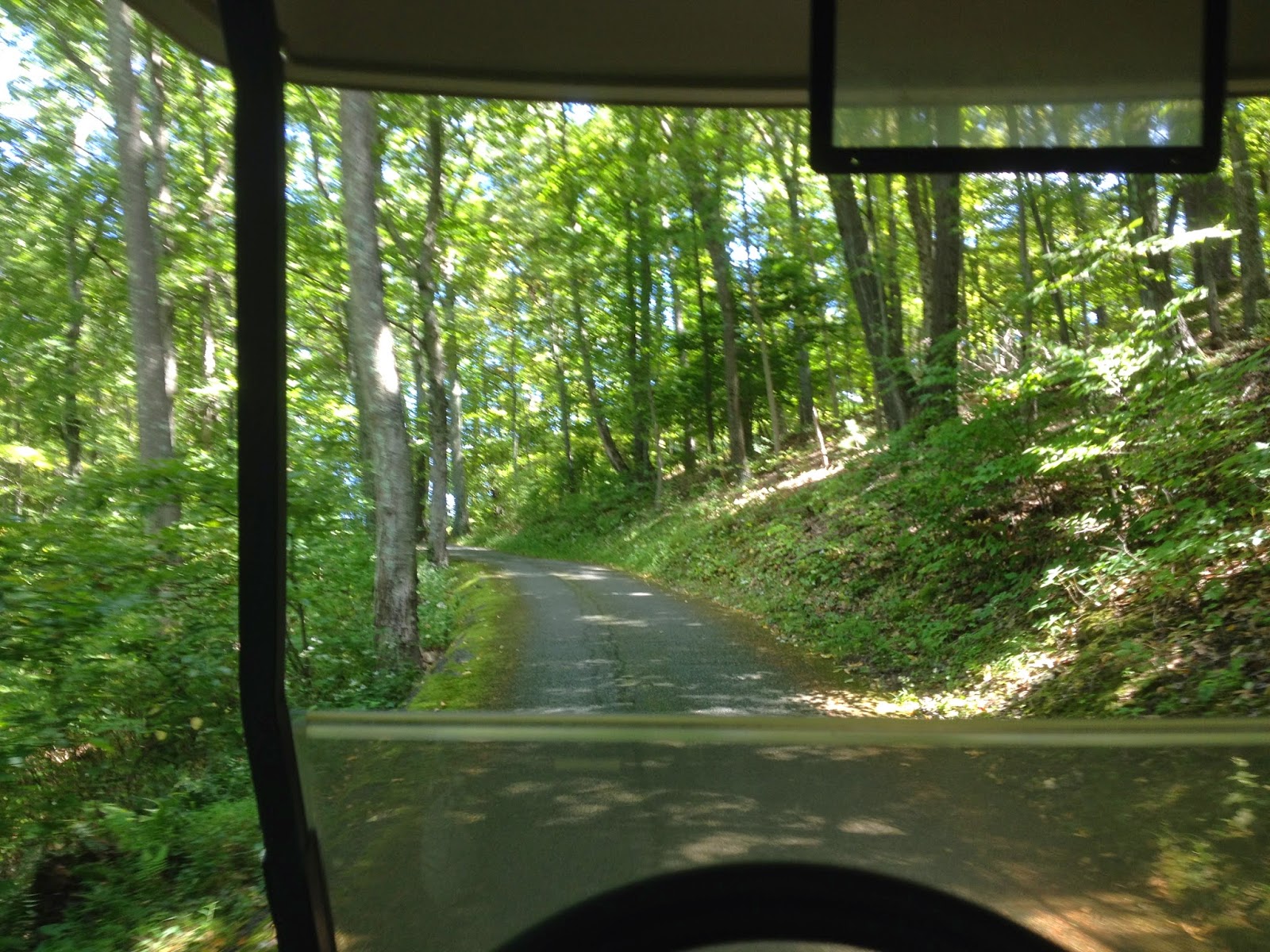 This place feels like summer camp. A wooded path leads to the fourth hole, and unbeknownst to us at the time, a world of hurt. It turns out that the first three holes are quite uncharacteristic of the rest of the course. 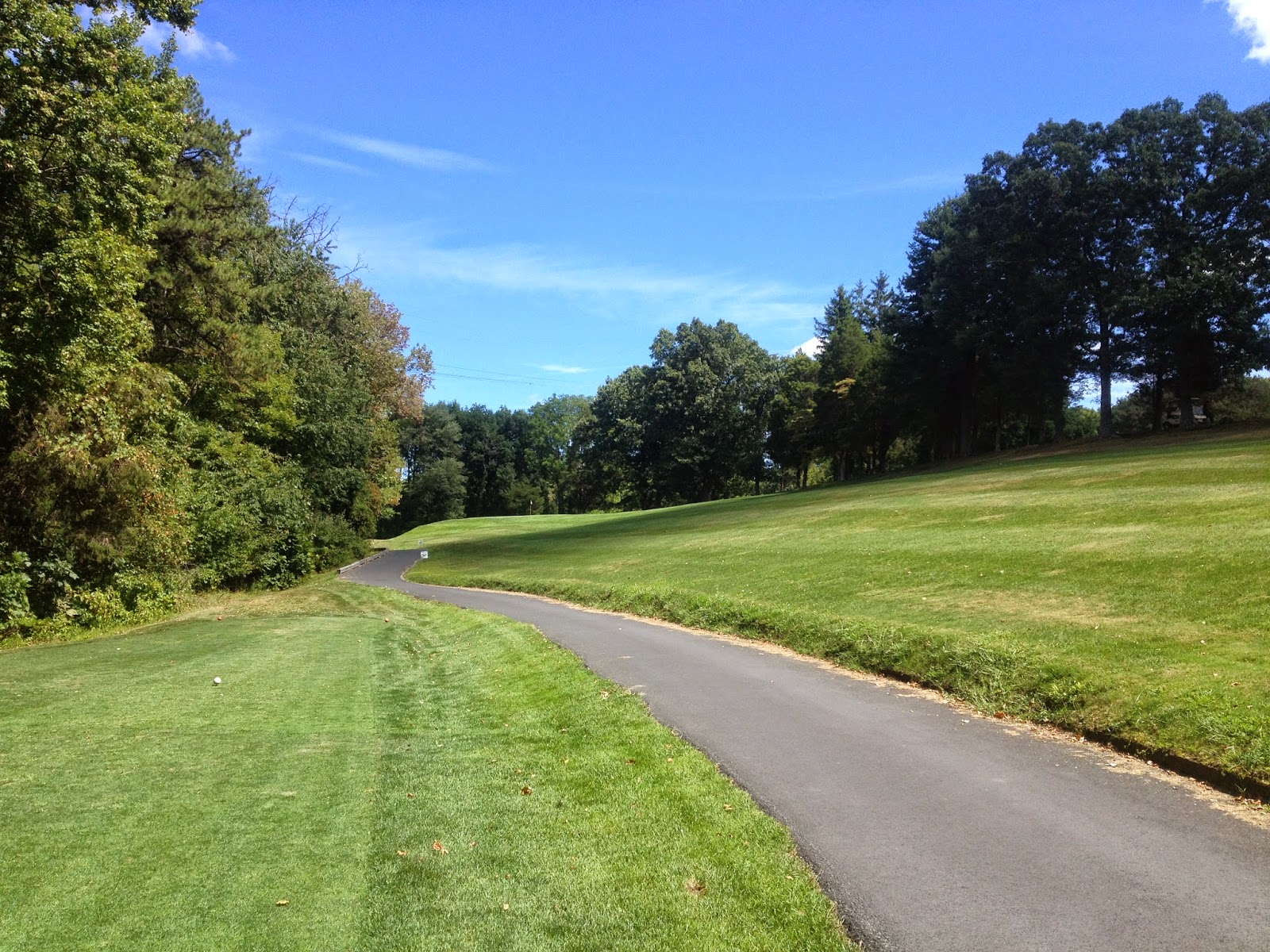 #4 is a very dicey par 3 built sidelong on a rather severe slope. I hit a decent ball but it had some hook. It touched down on the left fringe, but then bounced off the mountainside into oblivion and thus began our nightmare. 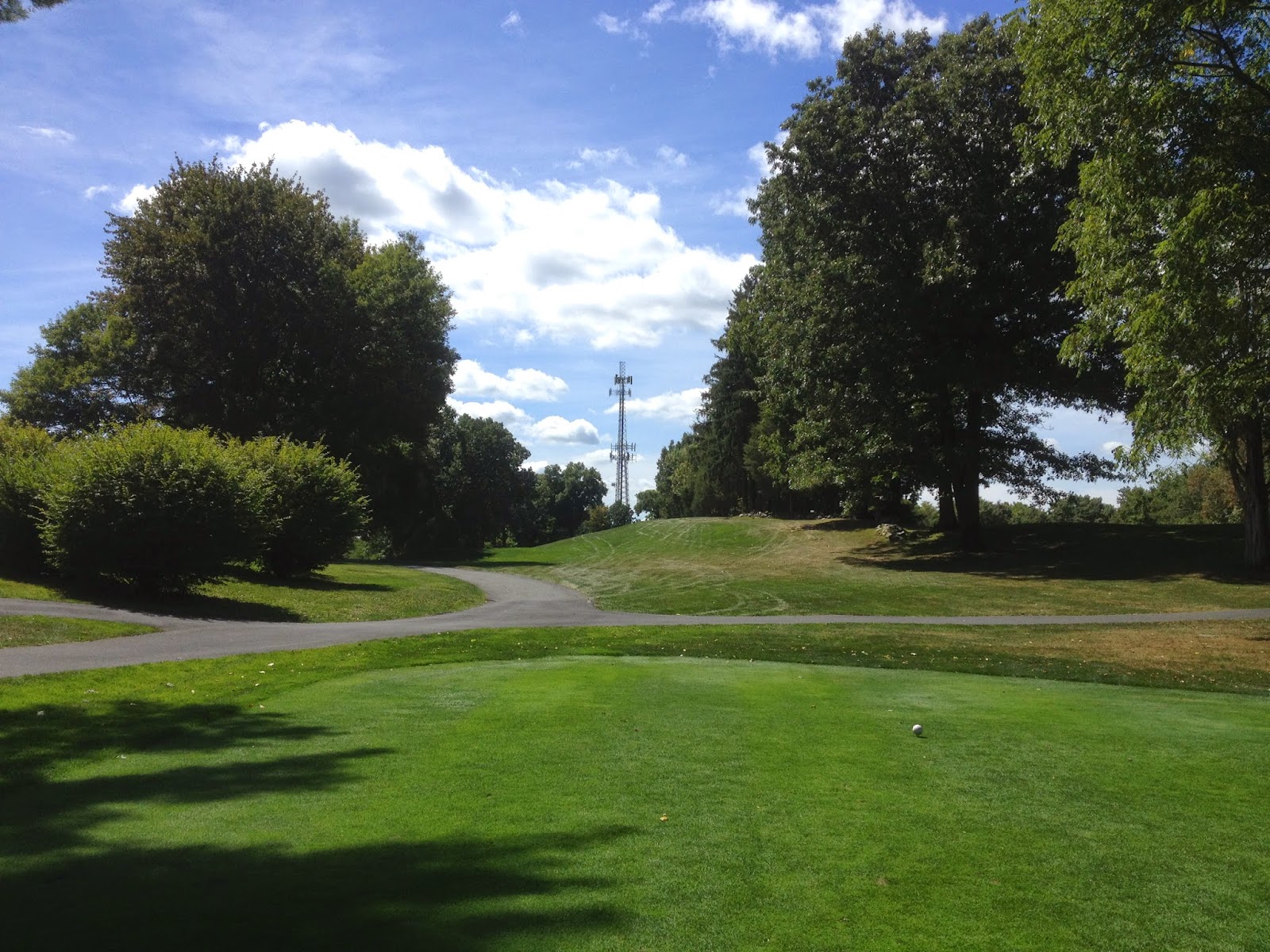 This was the view from the next tee. The narrowness is a big problem, and then it's compounded by a excruciating lack of a discernible landing area. I stood over the ball feeling extremely unsettled, and followed it up with one of the worst swings ever, smother-hooking a 4-iron hard left into that big tree. 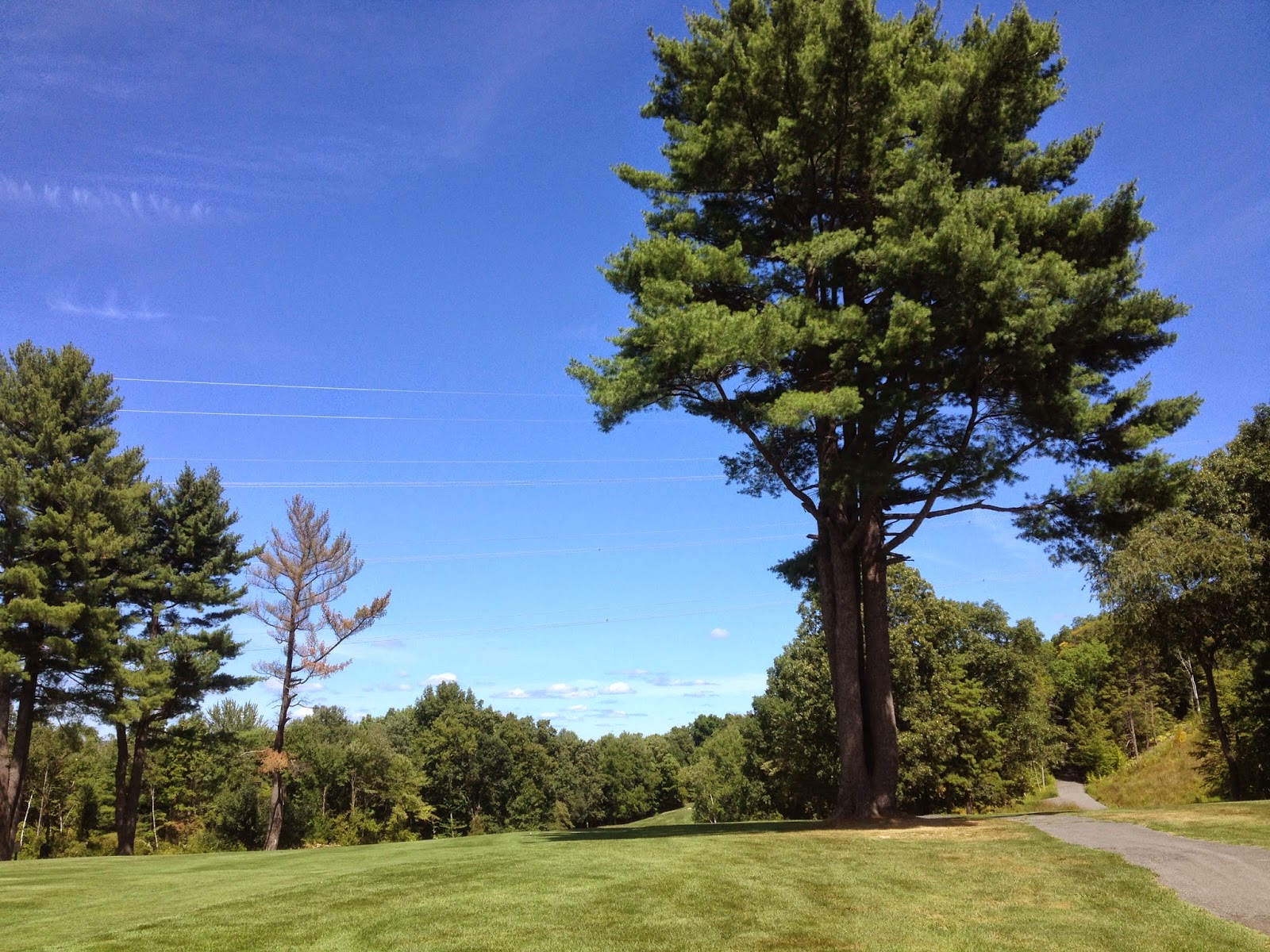 The next hole was a 600 yard par 5. Normally I can dig the challenge of a colossal par 5, but this one was narrow to the point of being painful. 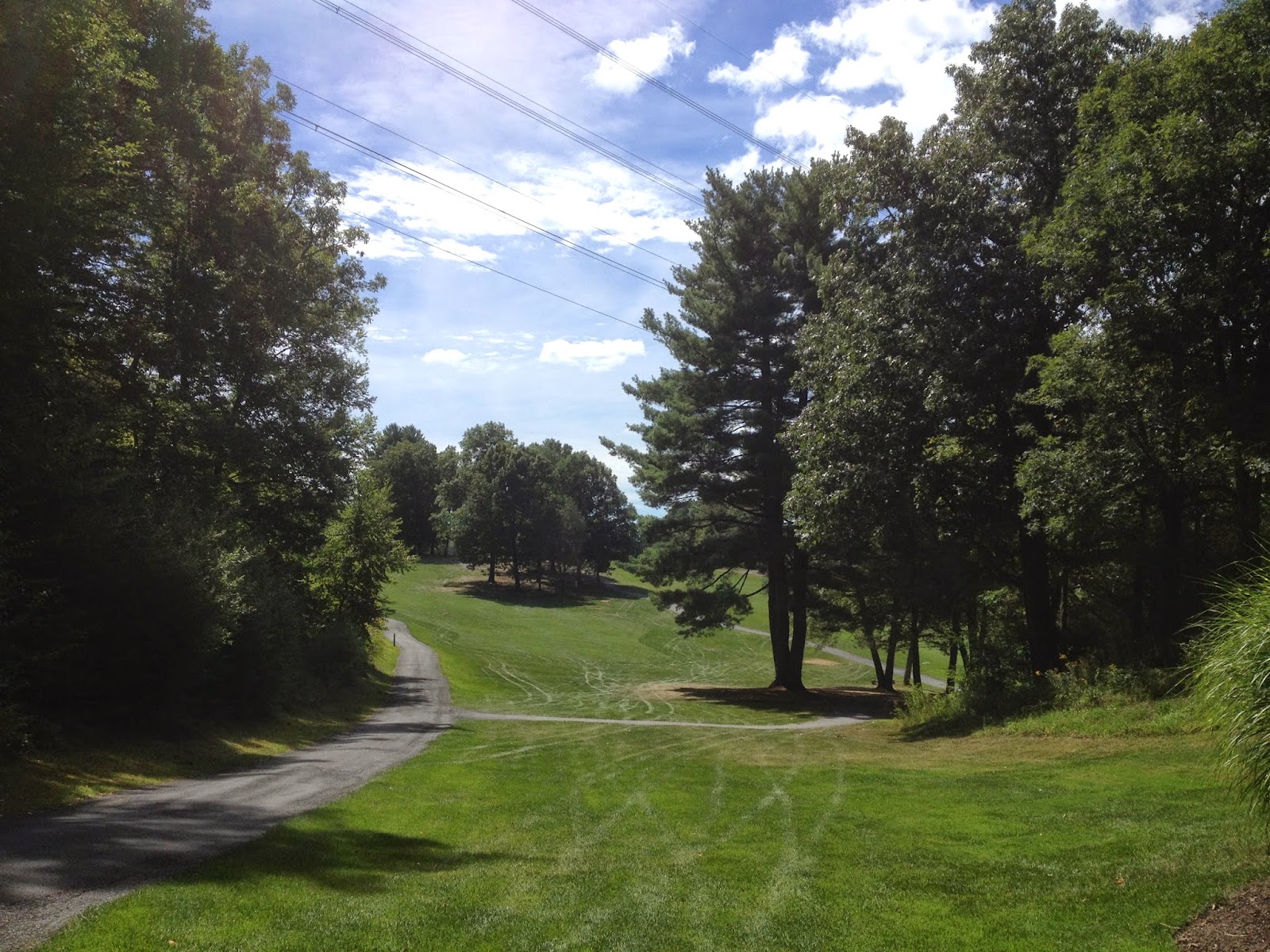 The rest of the round was a blur of unbelievably tight tee shots... 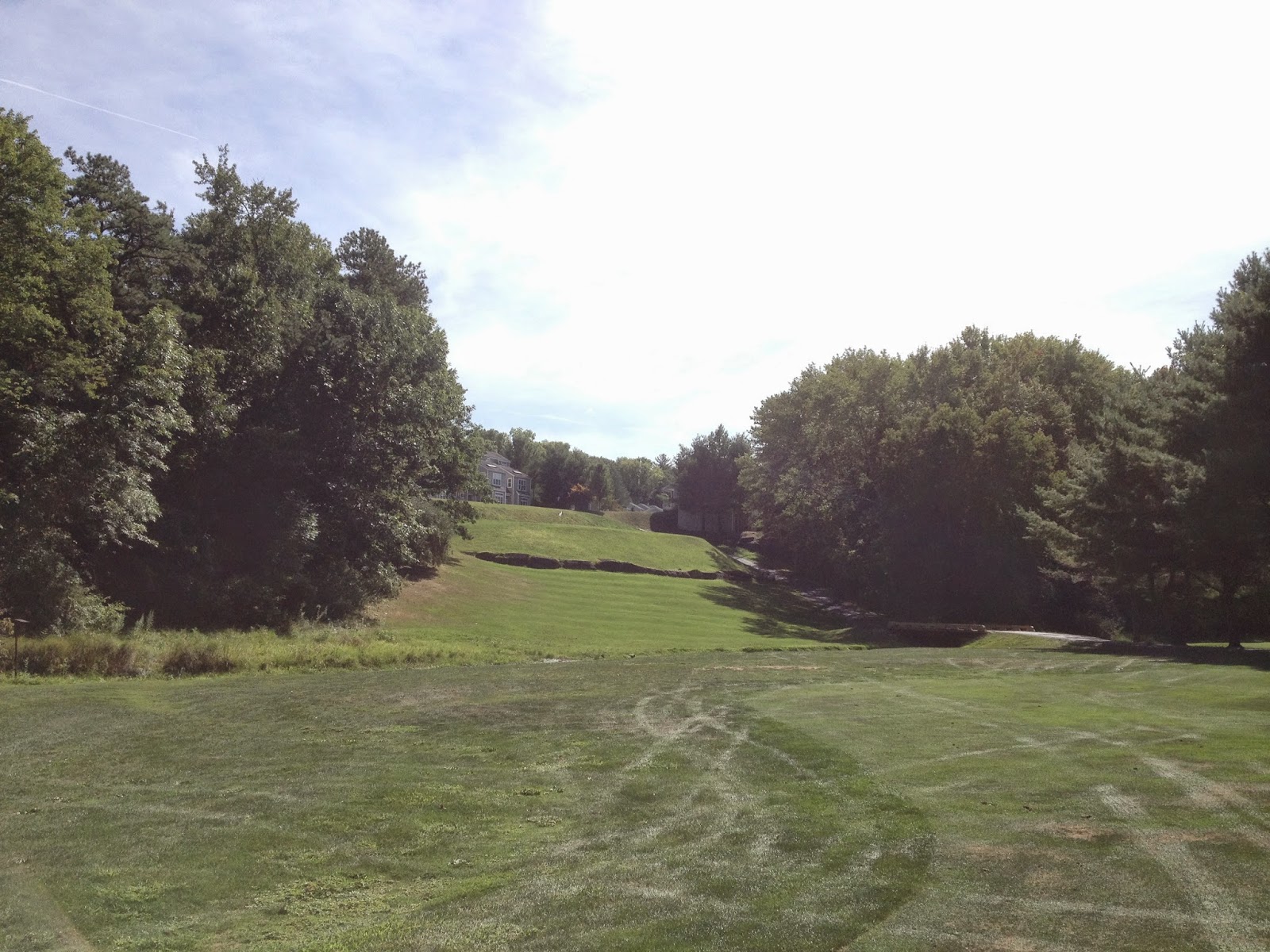 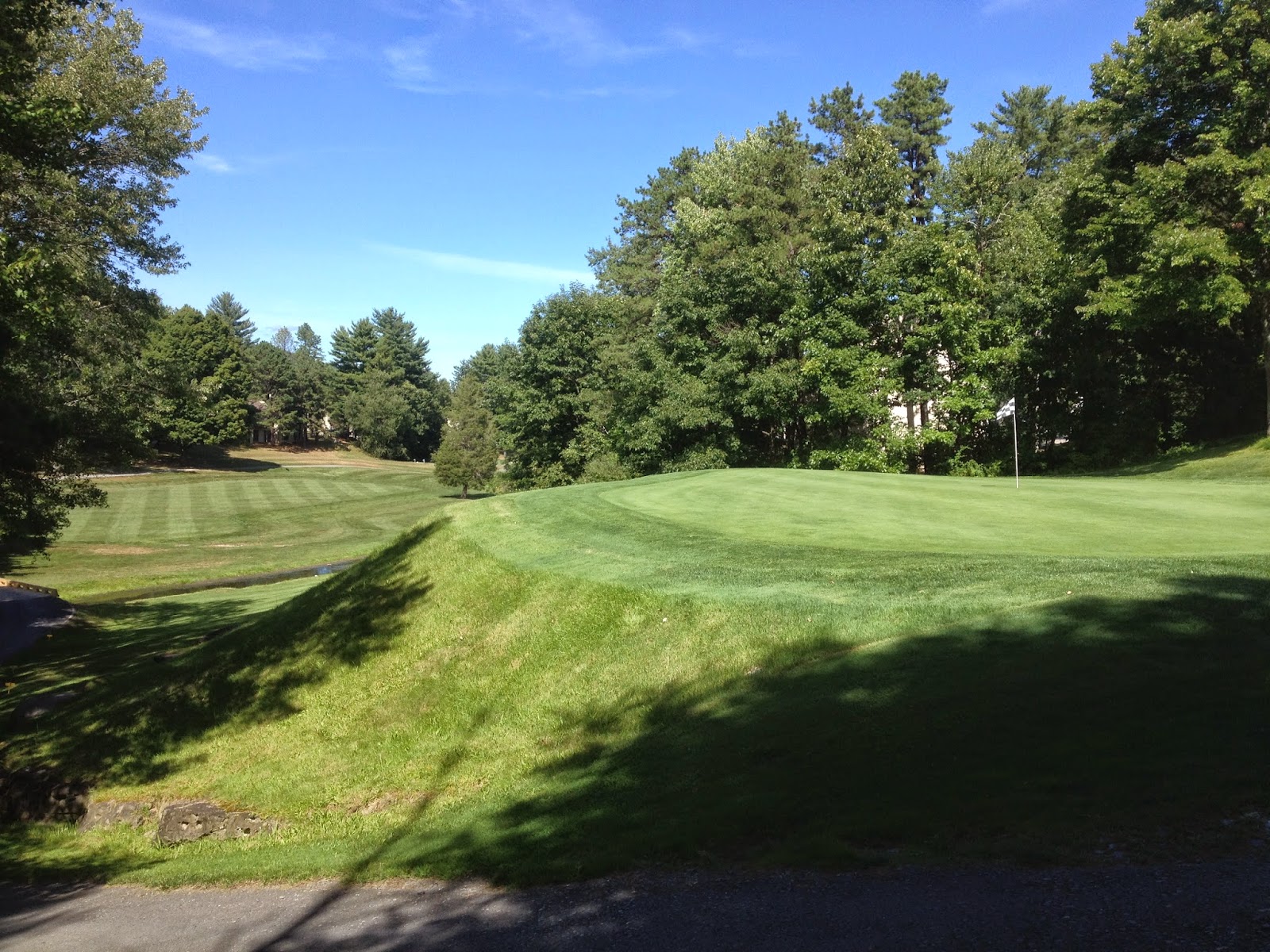 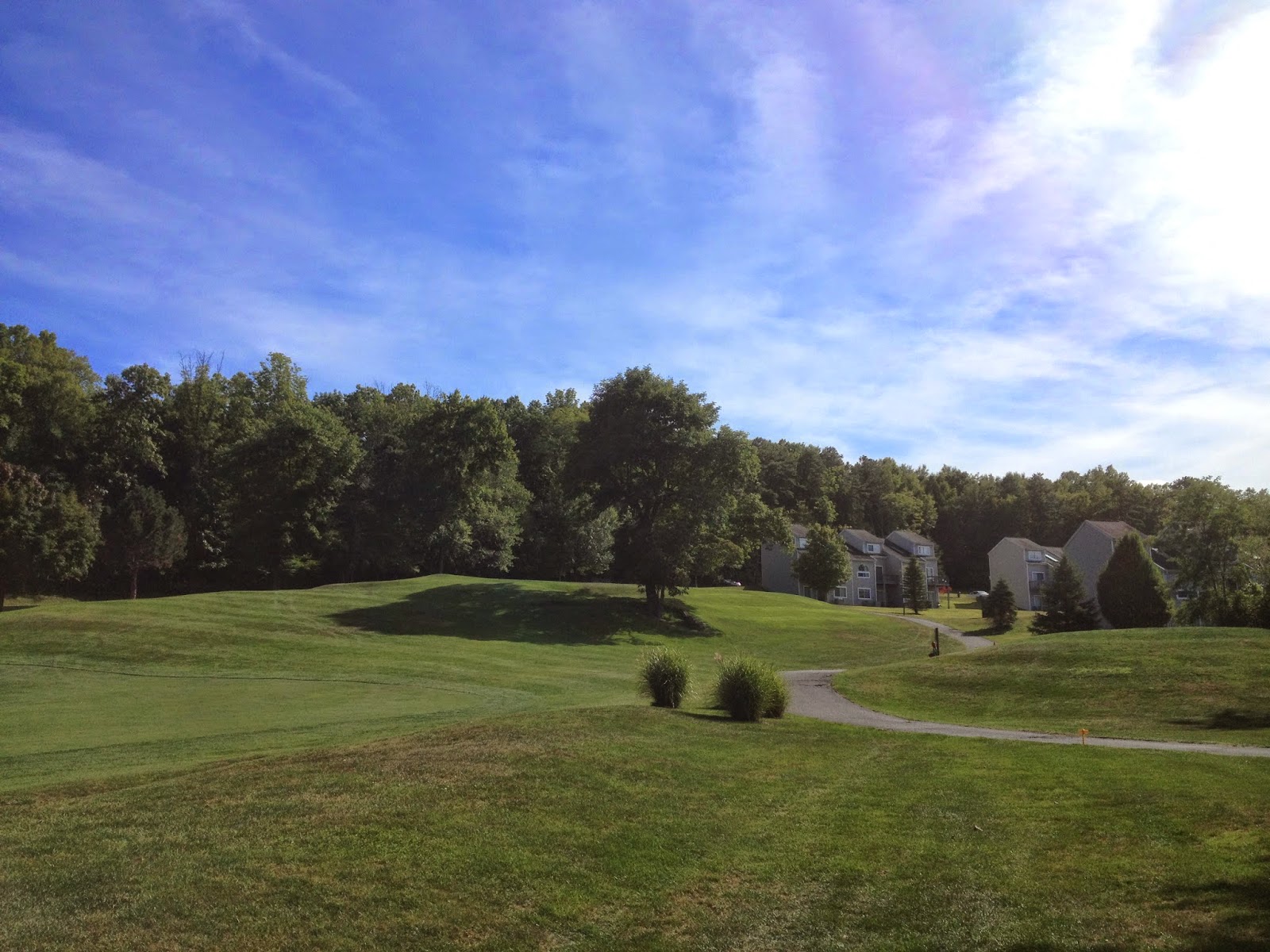 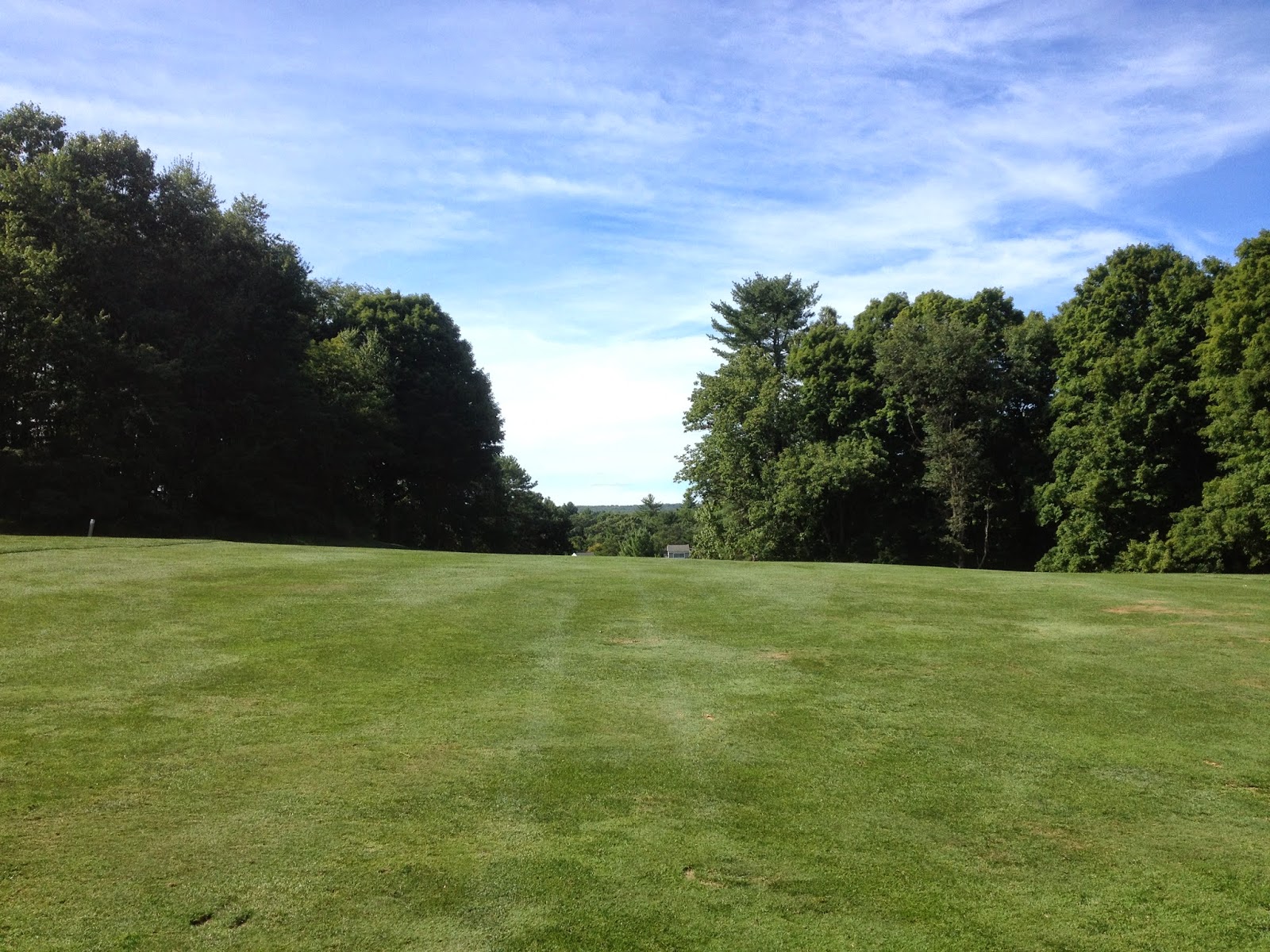 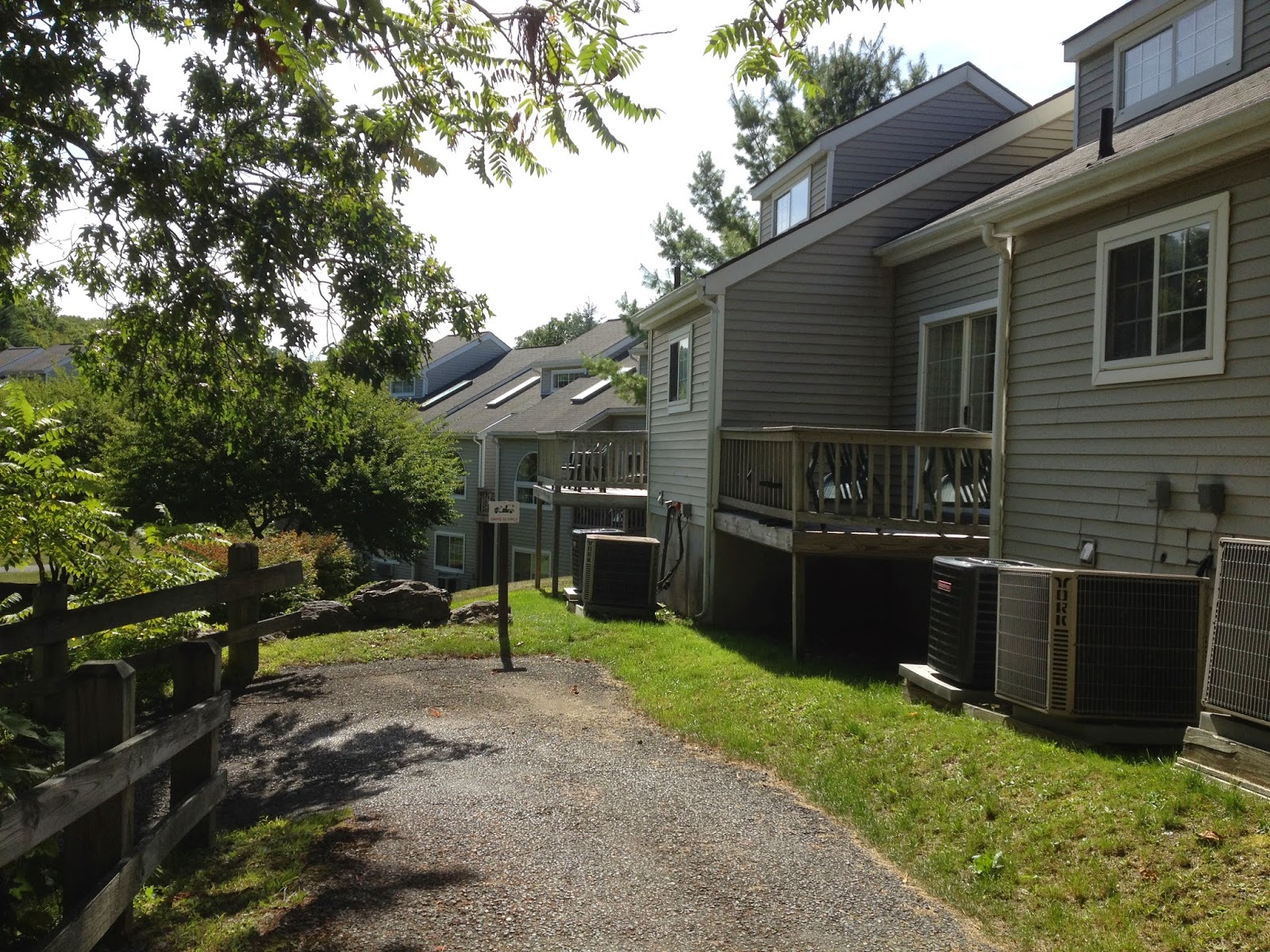 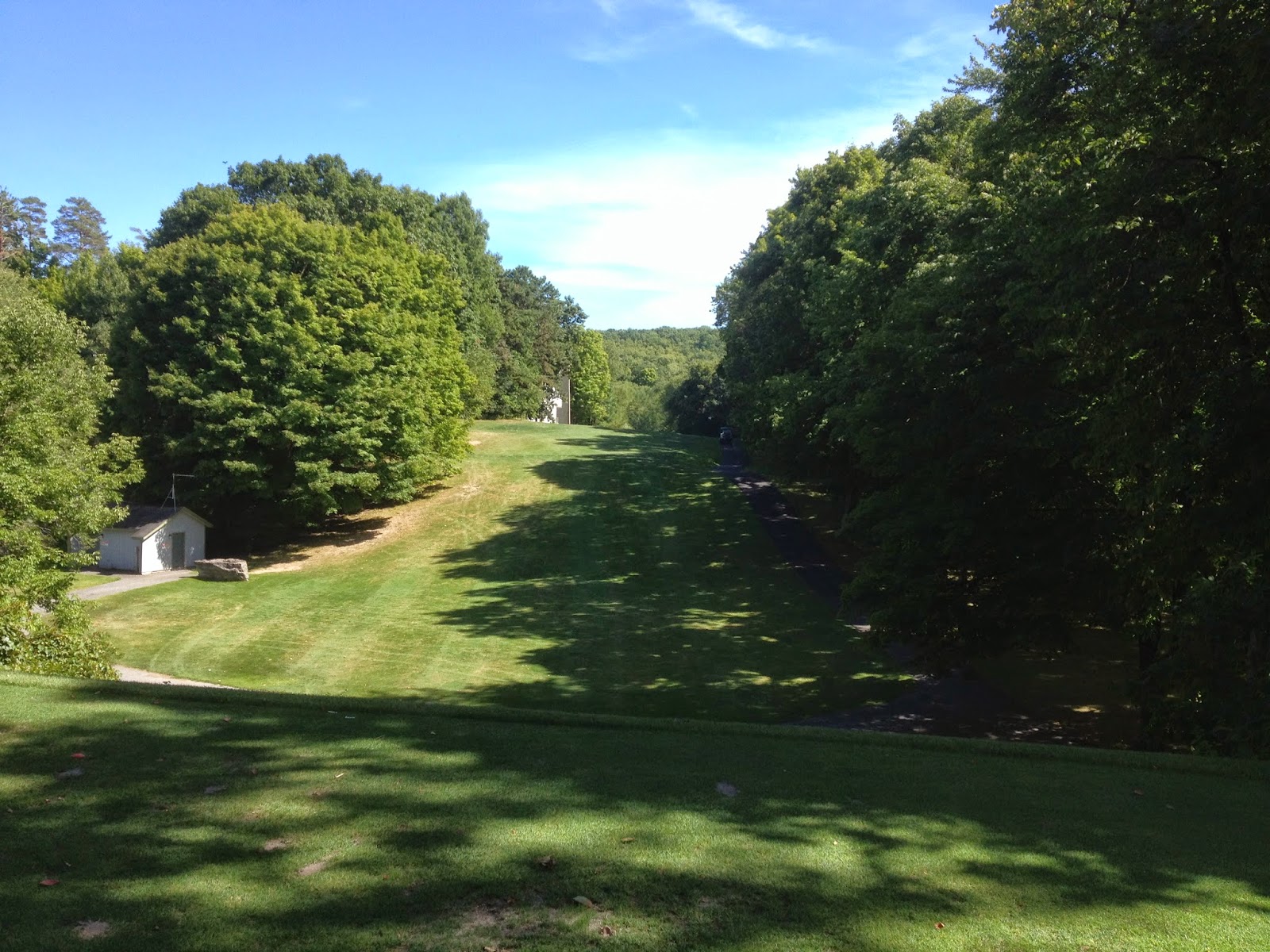 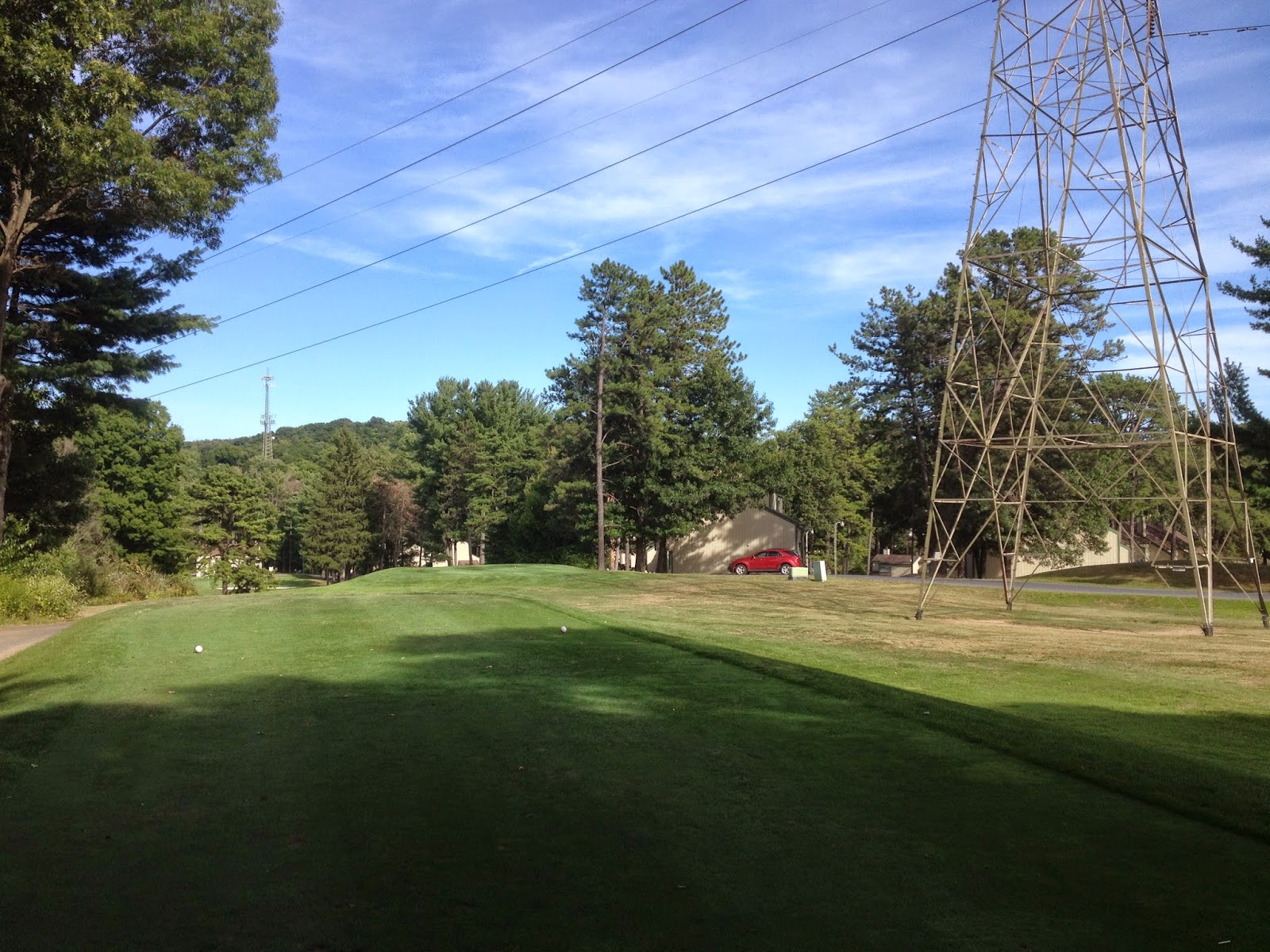 After seventeen holes of chunking up turf and losing balls, you are usually relieved to reach the final tee. But here at Fernwood, the view that greets you on the 18th is just as mind-numbing and visually nightmarish as the stupid fifth hole. I tried to ignore all the man-made artifices staring me in the face; then I flailed a 3-wood and hit a huge block straight over the rooftops.

I don't keep hard records on this sort of thing but eight penalty strokes is probably a personal record. It was a wild, hazardous ride. There was one hole where I hit four provisional shots before finding my original ball--that's probably a first too. Scorewise it was a disaster. Ever since the Brooklyn Open my game is stuck in recreational-hack mode (too hot, too crowded, can't be bothered etc.) and today in this mountainside house of horrors, I got splayed open. Some 'resort' this is.

On the plus side I putted well yet again, and I made two really nice sand shots. Onward and upward. 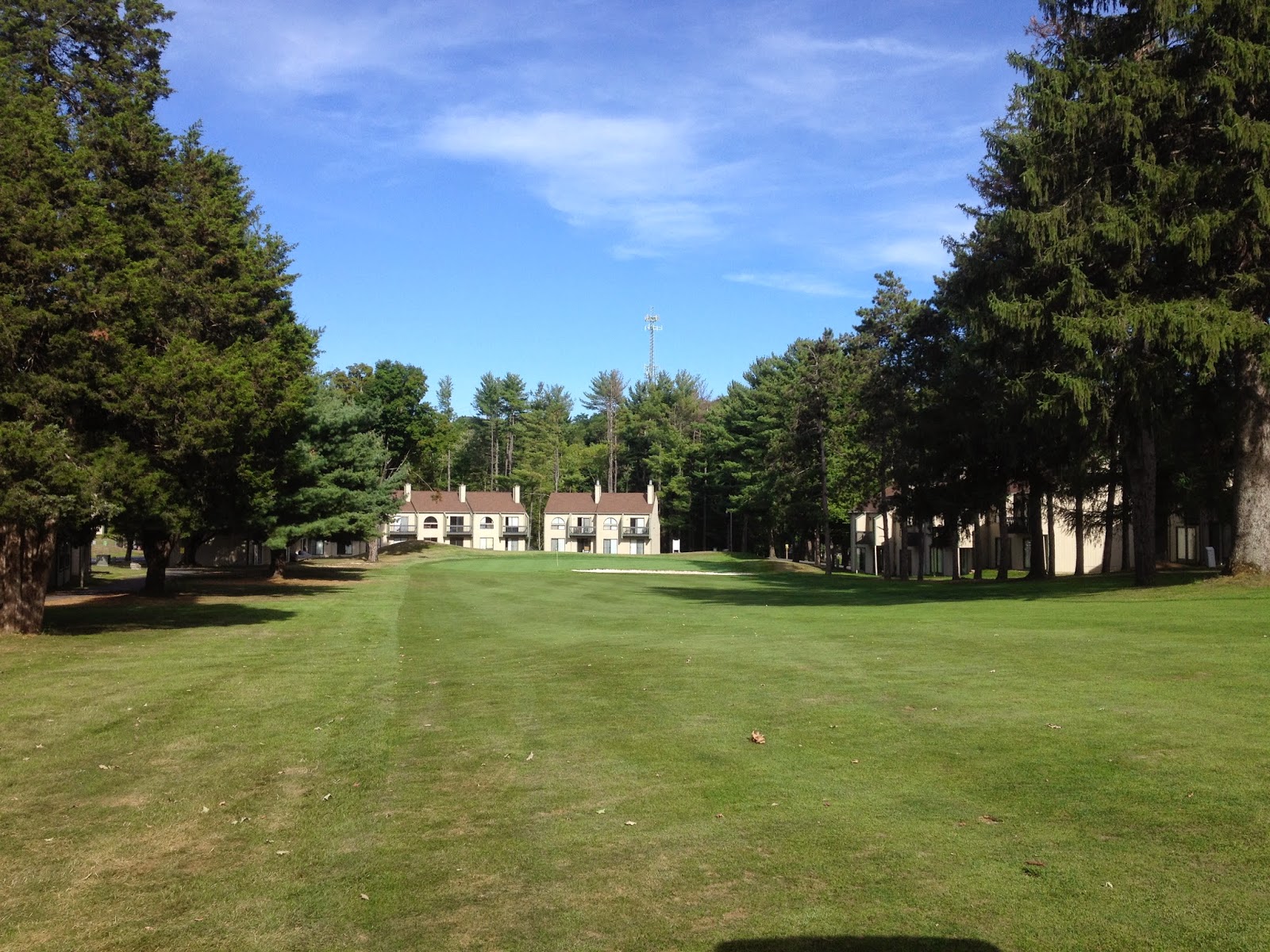 When I returned the cart it was lucky that no staff asked me how the round went. Because at that point I was ready to declare to anyone who cared to know, that this was nothing short of the worst course I have ever played--no offense of course. I wasn't mad. It's just an insanely designed course. It feels like an 18-hole course that was cheaply jammed into a space designated for nine holes.

Let's look at some aerial views of some of the tee shots we faced today. 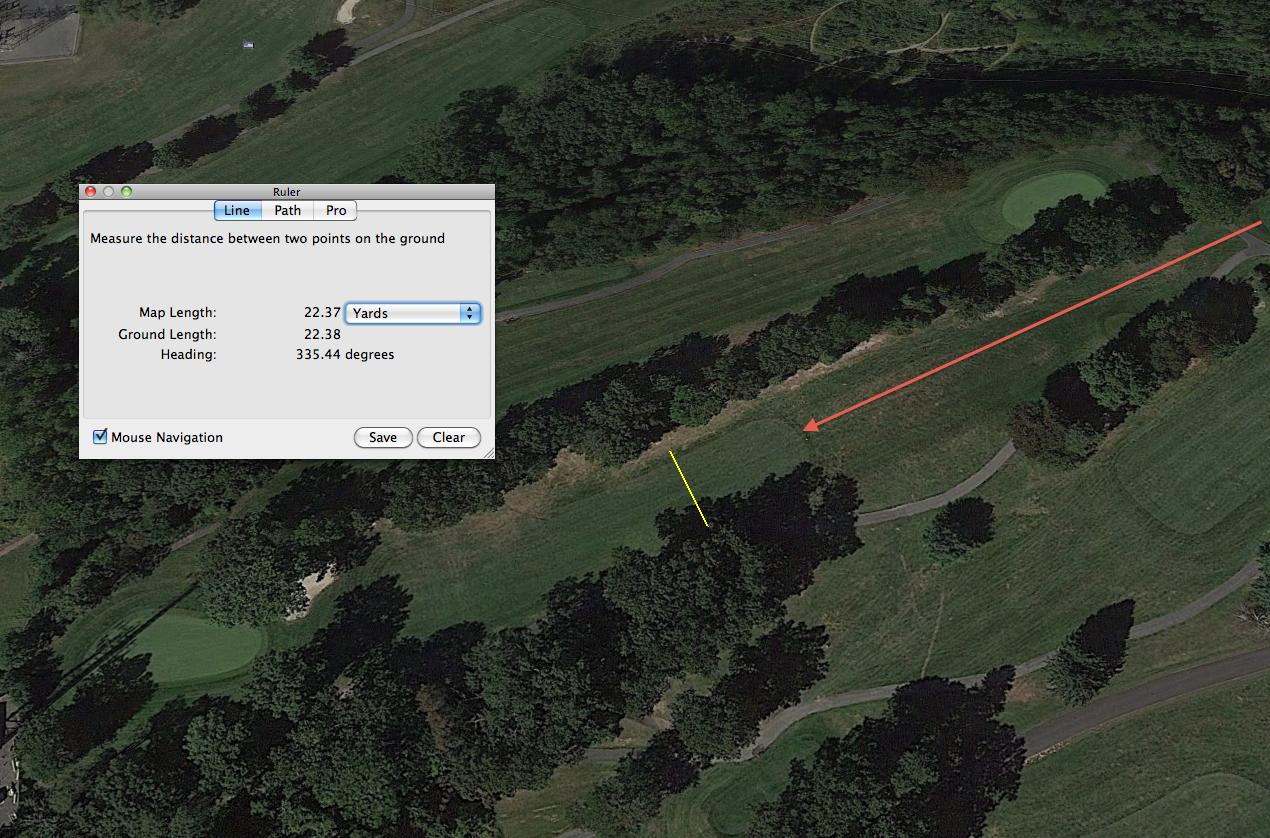 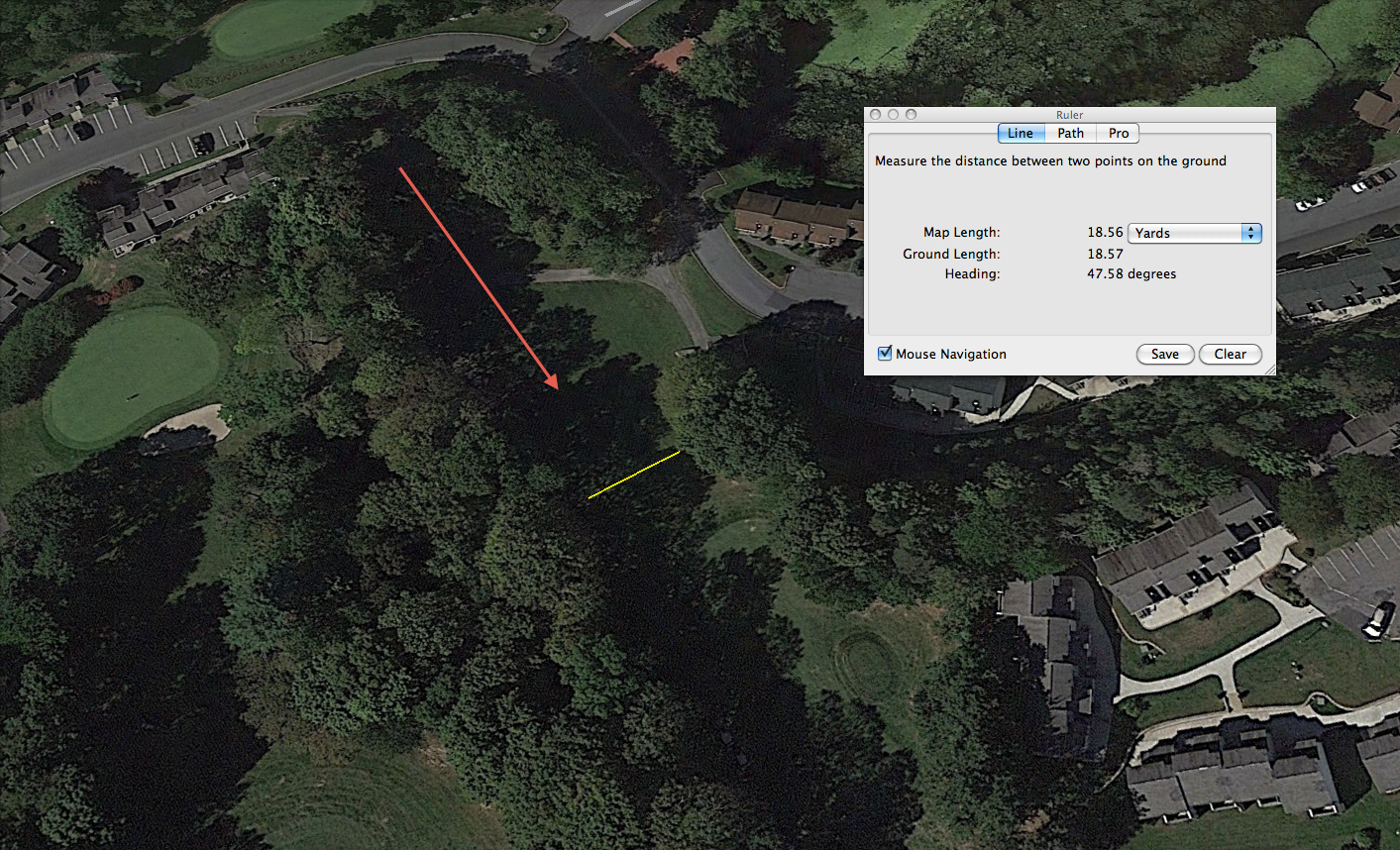 These are some extremely narrow widths. Am I right or am I wrong here. 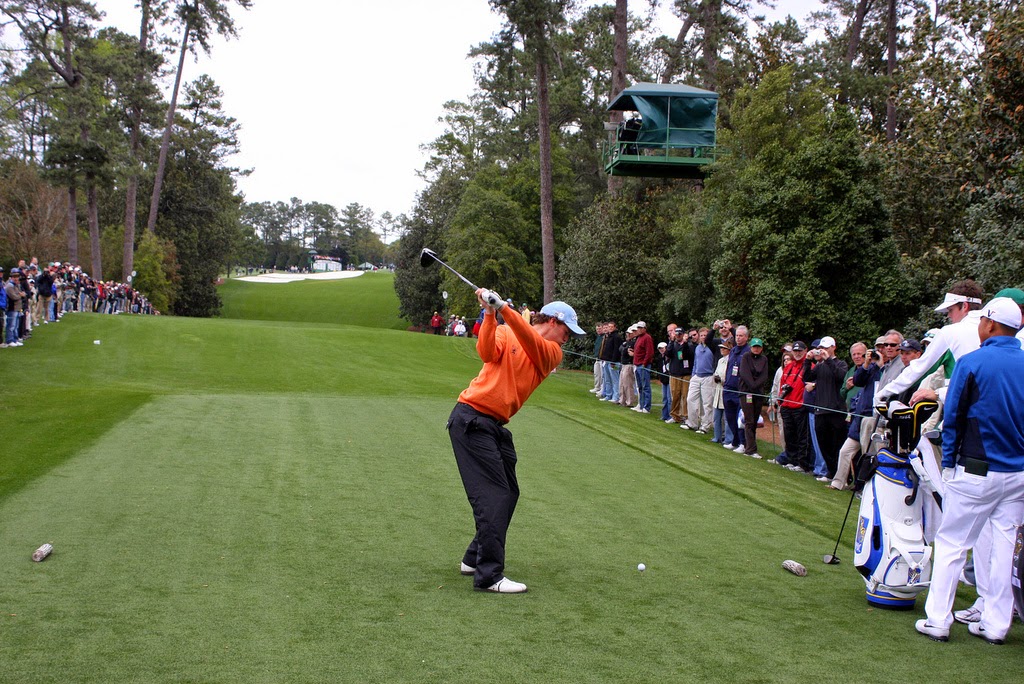 The tightest hole in TV-golf that I can think of is the 18th at Augusta. 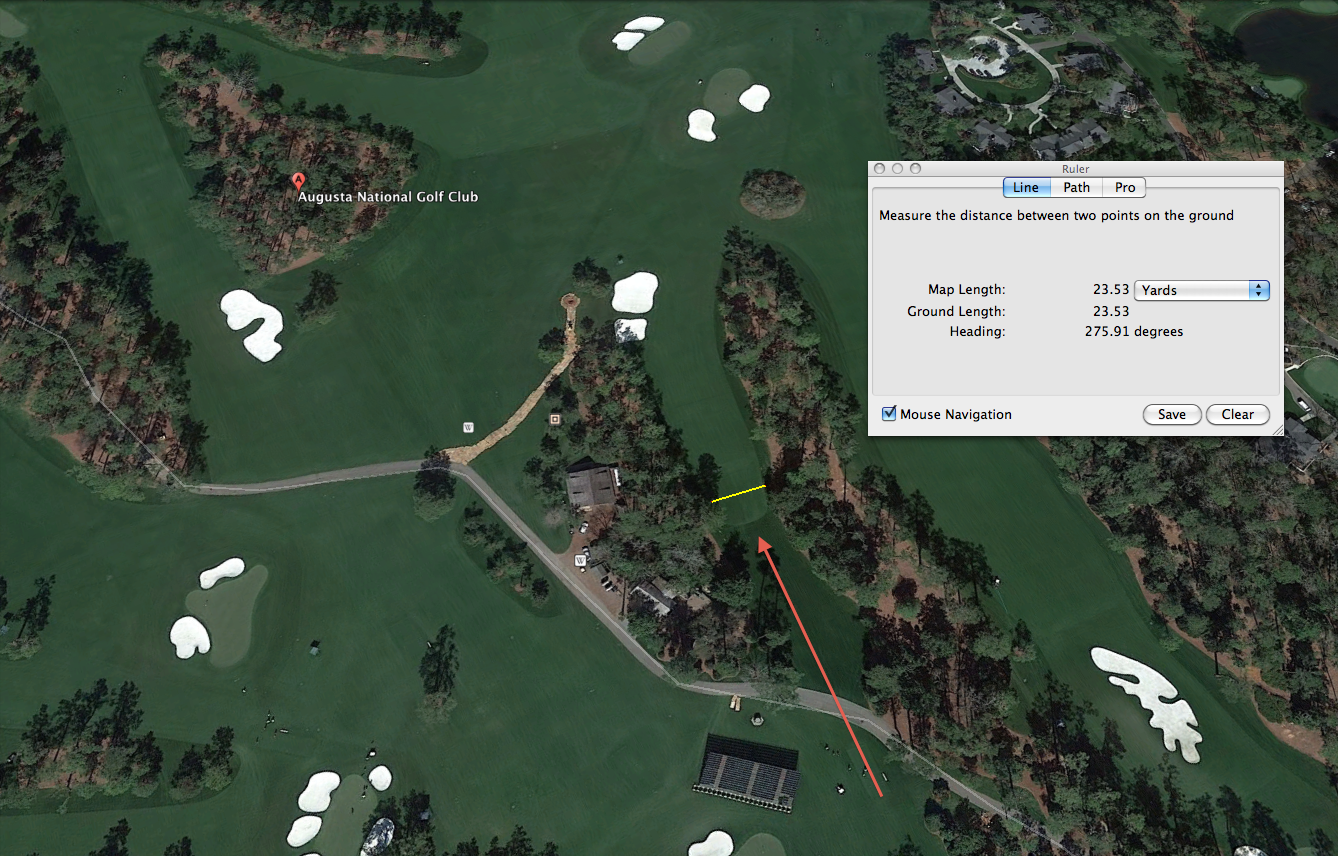 Even that's a little more generous than what Ms. L and I faced all day. These kind of ultra-demanding shots might make sense on that course. Here, they don't. Not sure if I'll even be back to the Poconos, for golf or otherwise. What have they got here that you can't get in the mountains of Jersey, about 45 minutes closer? Legal fireworks, I guess.
Posted by Legitimate Golf at 9:54 PM