Over the weekend I had a visitor. One of our brave readers from south of the Mason-Dixon came up to the city for a bit of adventure, personal edification, some light tourism, and to experience first-hand a slice of ghetto golf life.

Due to circumstances we ended up playing Dyker Beach twice in three days. Not the best itinerary, but perhaps good for my Southern friend in that this would at least offer him a deeper, rawer, more immersive experience. This is after all the ground-zero of ghetto golf in the Americas, in my opinion.


We played a little match, a $1 nassau in which we used matchplay scoring, but with regular stroke-play rules (i.e. no concessions). This agreed with me as I like the matchplay format but never really cared for the shifty gamesmanship, emotional tension and butt-hurt feelings over perceived slights that can arise from the concessions (or more likely the withholding) of putts. No, you worry about your ball, I'll worry about mine and after we've holed out we'll tally up the score, no muss, no fuss. So goddamned civilized.

Civility--that's what I really appreciated about playing with a guy like Mr. F. Frankly one could not ask for a better person to play golf with. He is an embodiment of the legitimate-golf ethos; definitely putting me to shame in that regard. He play his shots quickly and decisively, knows and abides by the rules, and accepts bad scores with grace and maturity.

In our first round we were lucky to be paired with a couple of quick players. Still, we were subjected to some typical NYC slow play pandemic, which roadblocked us from finishing 18 holes before sunset. Around the 10th hole we got a taste of some of the on-course anarchy described in my more disgruntled blog entries. Pace had crawled along all afternoon and at that point frustrations boiled over and the group in front of us, ticked off at the group in front of them for dawdling on the tee, shouted over at them to hit the damn ball. The dawdlers yelled back in recrimination, accusing them of needing to relax. But I appreciated the initiative of the self-policers. "Gotta take the law into your own hands around here," I remarked.

Our second round was also infuriatingly slow, five-plus hours, and fraught with stupidity from the get-go. We were sent out a full half-hour past our tee time for no apparent reason. When we tried to hand our ticket to the starter he put his hands up defensively, telling us to back off and give him some space and some time to figure his shit out.

I had warned Mr. F about the staff at DBGC, how systemic the ineptitude is and how badly it shows itself whenever the course gets even a little bit busy. Okay so it's an especially popular public course, but each time it gets busy, the staff seems to react like it's the first time it's ever happened. (As bad as this is for the customer you can only imagine what a misery it must be to work here, having to stress out and bumble around like a headless chicken any time it gets busy, with no organization, no system in place to deal with any of it.)

On the one hand I felt embarrassed by all of this playing out in front of a guest, as if it would somehow reflect on me as well. But on the other hand I was glad that someone from the outside world, who's probably familiar with my online ranting, got to witness it first-hand. Even for just one person to see that there might be a real-world link between what goes on here and my tortured griping, is somewhat comforting. 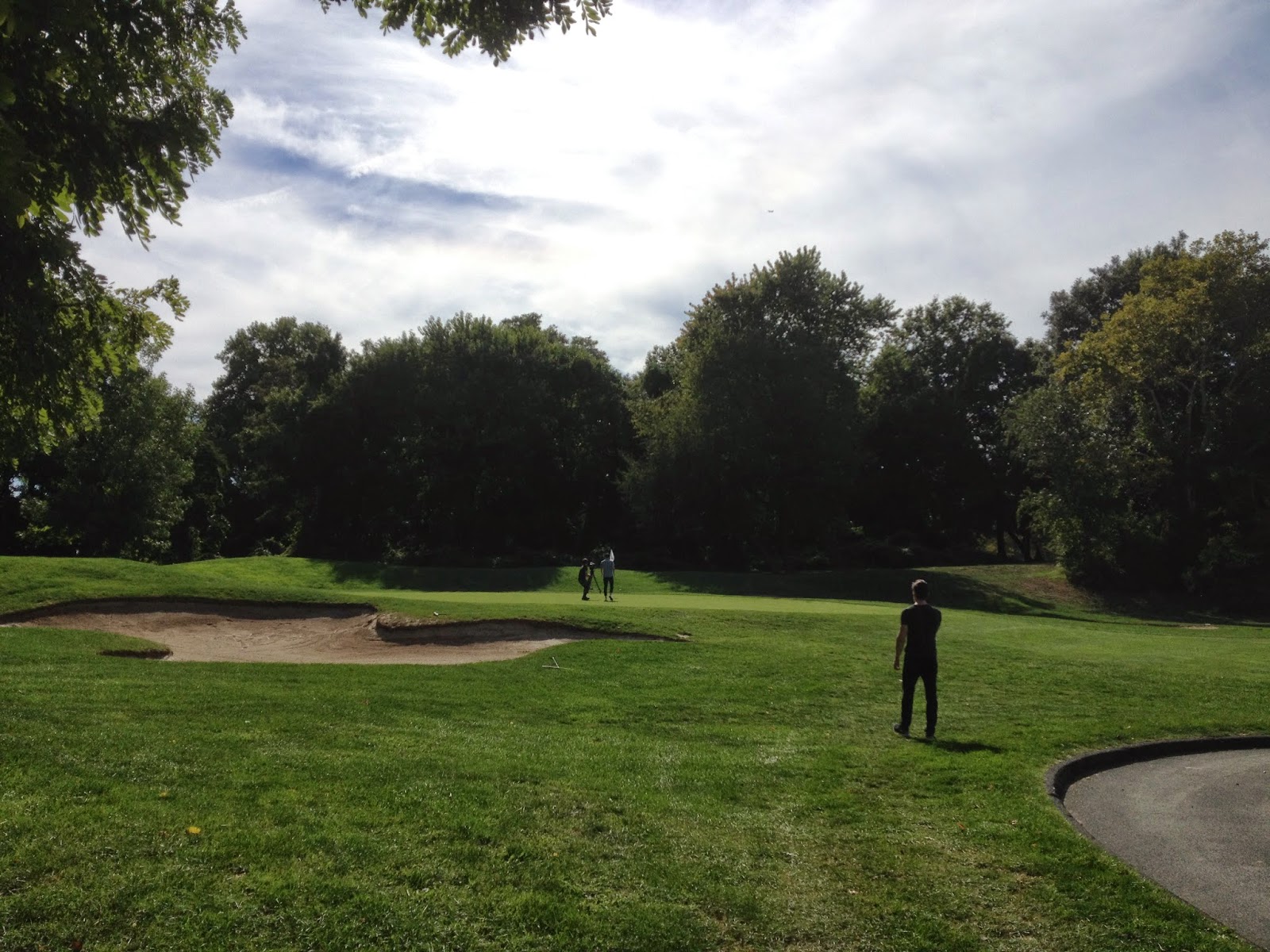 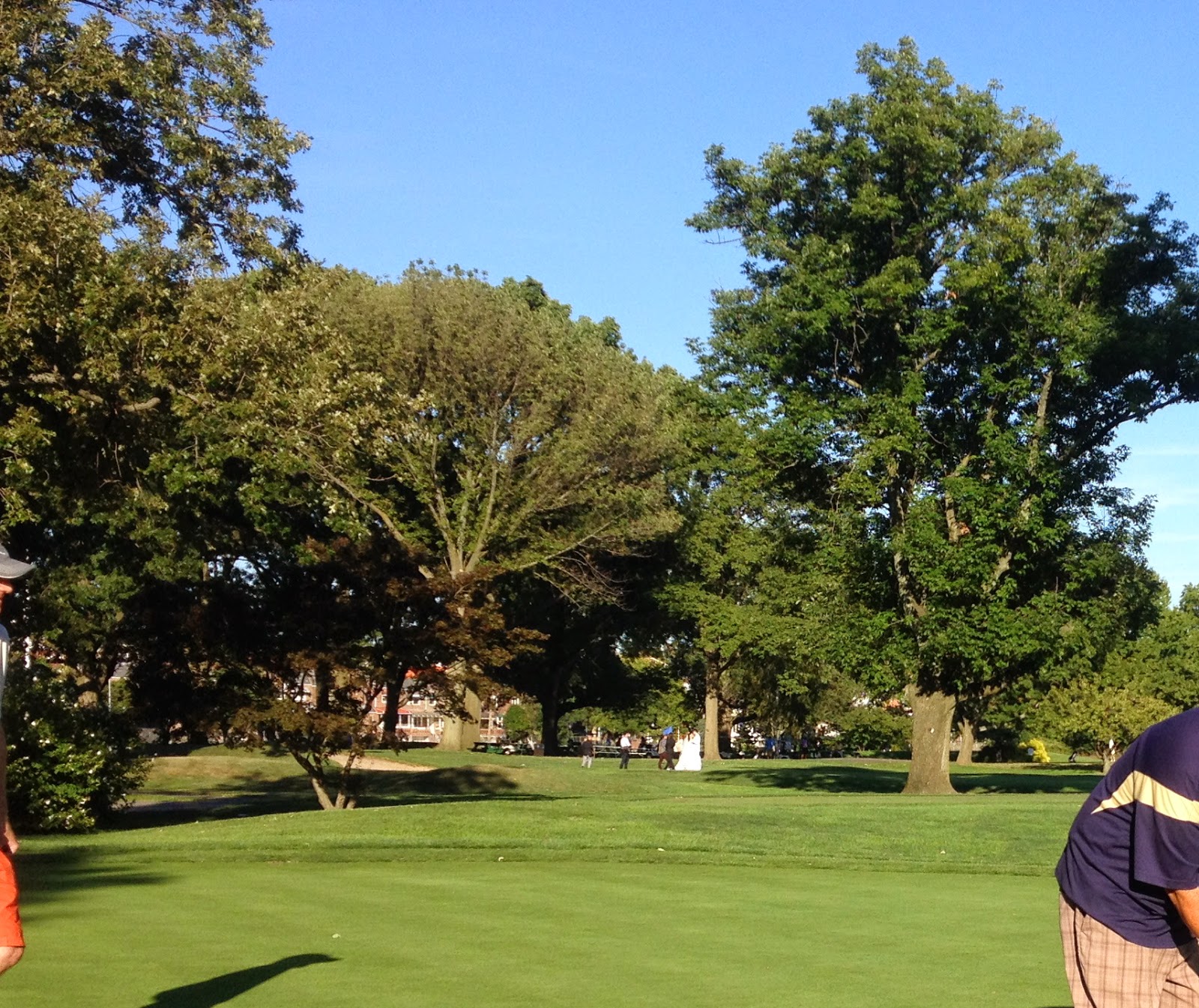 There were some other assorted shenanigans. On both days our rounds were interrupted by wedding photo shoots staged on the 8th and 9th greens. This wouldn't be so bad if there were some semblance of governance on this course, some feeling that someone's in charge. As it is though, stuff like this just adds on to an overarching sense of insanity, a feeling that courtesy and consideration for others simply have no place here.

But we had a nice match. Since the both of us are upstanding scorekeepers in our day-to-day golf lives, we had only to defer to the USGA system--I gave Mr. F three strokes accordingly--and dammit if this didn't yield a close competition. On the first day I won 2/3 of the nassau, and on the second Mr. F swept all three bets (front, back, and overall). It just goes to show--kids, if you keep your scores in good faith, count all your putts and penalties, your handicap index will be a number that is both meaningful and useful. The system works.


I'm glad to say that Mr. F had a good time, aptly describing the DBGC as a fair course. Unlike mine, his play solidified as the rounds went on. The shoddy turf, haphazard rough, greens that alternated between balding and overgrown, and general disrepair didn't seem to bother him at all. That surprised me a little since I tend to think of his home state of South Carolina as some kind of golf paradise, free of such indignities.

I thoroughly enjoyed the company, talking in between shots about our shared affinity for music and guitars and hearing his tales of college-rocking in the 90's. If he lived around here I'd probably bug him to play all the time. However, I did have a bit of a struggle getting myself through the course, especially by the second day, so burned out am I on this stupid place. It's like a third-degree burn at this point. Spending ten hours here over the course of two rounds reminded me of why I hadn't been here in a while, and why I won't be back until the temperature dips below 40º--when I am here, it's hard to see the good in life. I also waned some physically and played poorly and indifferently down the stretch, essentially handing the match over to my opponent. Not making any excuses--I know that had my attitude been more positive, I totally could've scratched out some better scores.

In a past life I walked and carried my bag. And I didn't just walk--I considered walking-golf to be a higher, purer form of golf, better for the scorecard and the soul alike; I spat venom towards cart-golfers. But nowadays thanks to a steady diet of cart-included online tee-time deals I've grown fat and lazy. Well maybe not literally fat, but I have succumbed to the horrible cliche of becoming the very thing one once hated. And over these two rounds I paid a toll for my atrophied walking muscles. Walking and carrying was no thing for the spry Mr. F (who also had plenty of energy to spare to traverse the city doing tourist stuff), but I dragged my feet and could only shuffle weakly across the finish line. Use it or lose it pal. 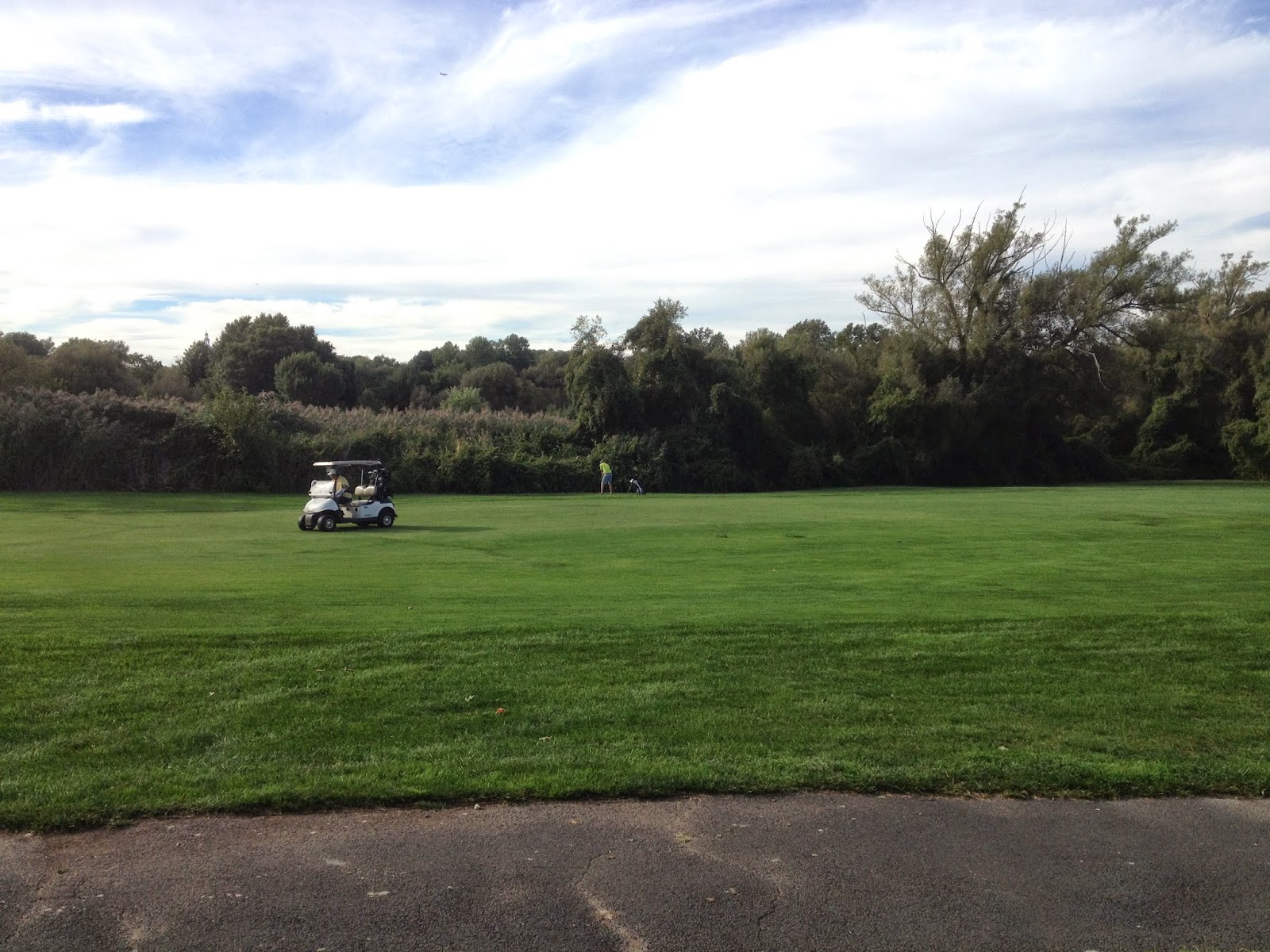 All in all it was great to have a visitor, since being a lone-wolf in the city is getting to be a desolate, suspicious, world-weary existence in 2014. And as I said, reassuring to have an outsider bear witness to some of the bad stuff that's often described in this blog. Hopefully we can play together again in the not-too-distant future. Hopefully in a better place than this.
Posted by Legitimate Golf at 11:12 AM