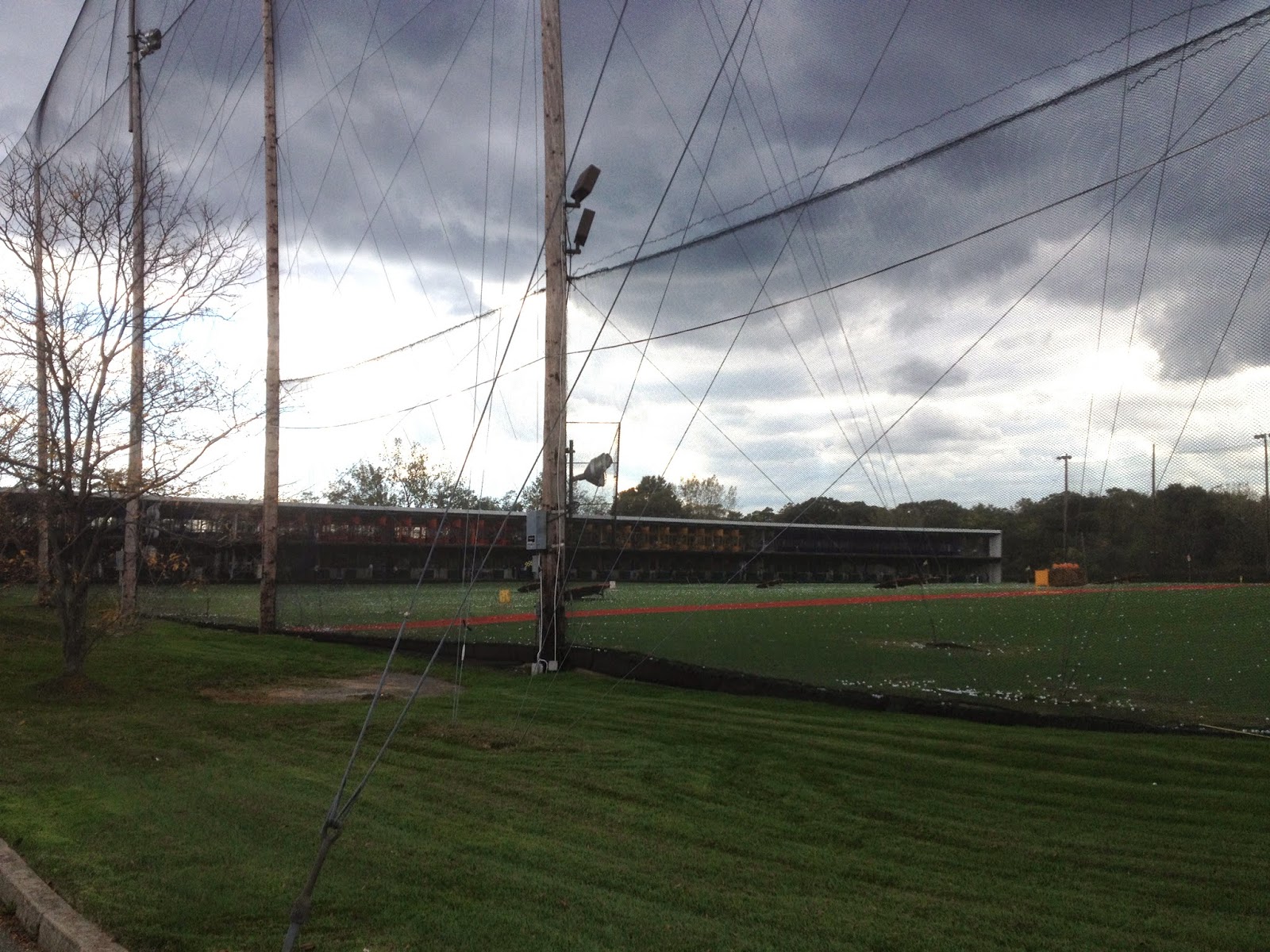 After a week of no-golf, I was starting to get a little itchy. My parents had spent a few days visiting the city, and when it was time to drive them to the airport I thought I might as well find a place to pound some balls while we're out in Queens.
We made for the Alley Pond golf center, only to find the place closed for "renovations" for the next few months. But a sign out front referred customers to the nearest range, a couple towns over in New Hyde Park, across the Nassau County border. 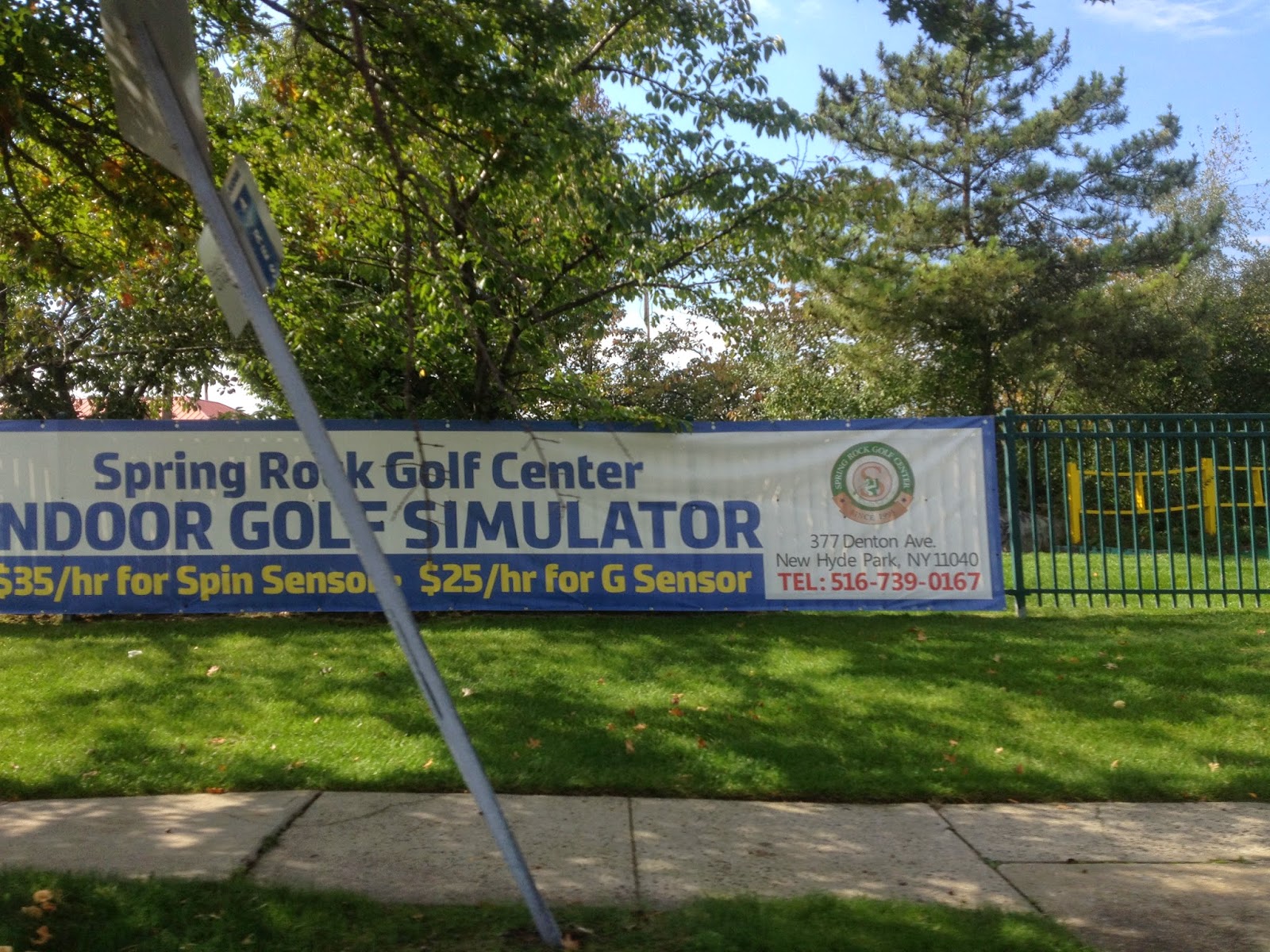 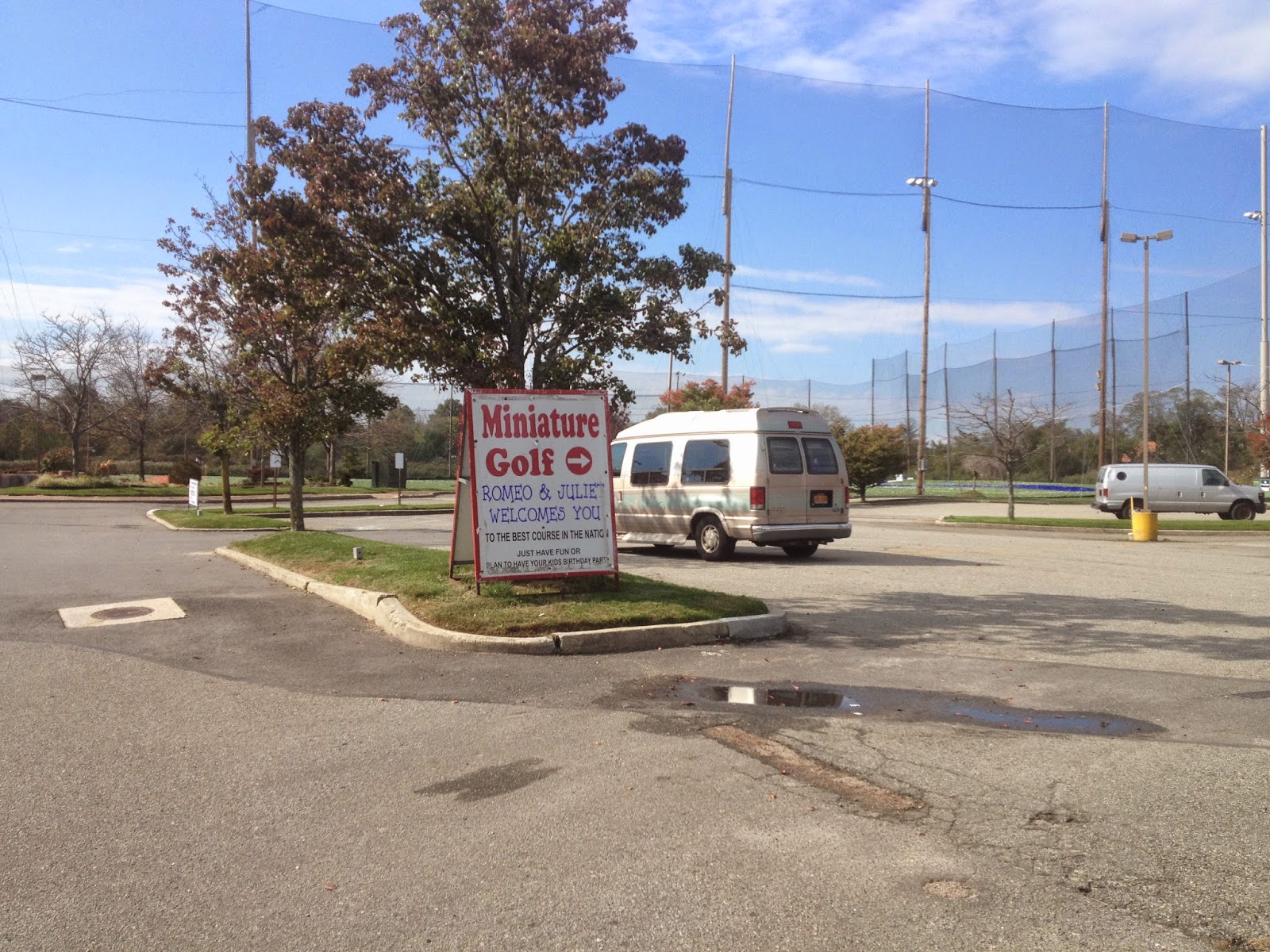 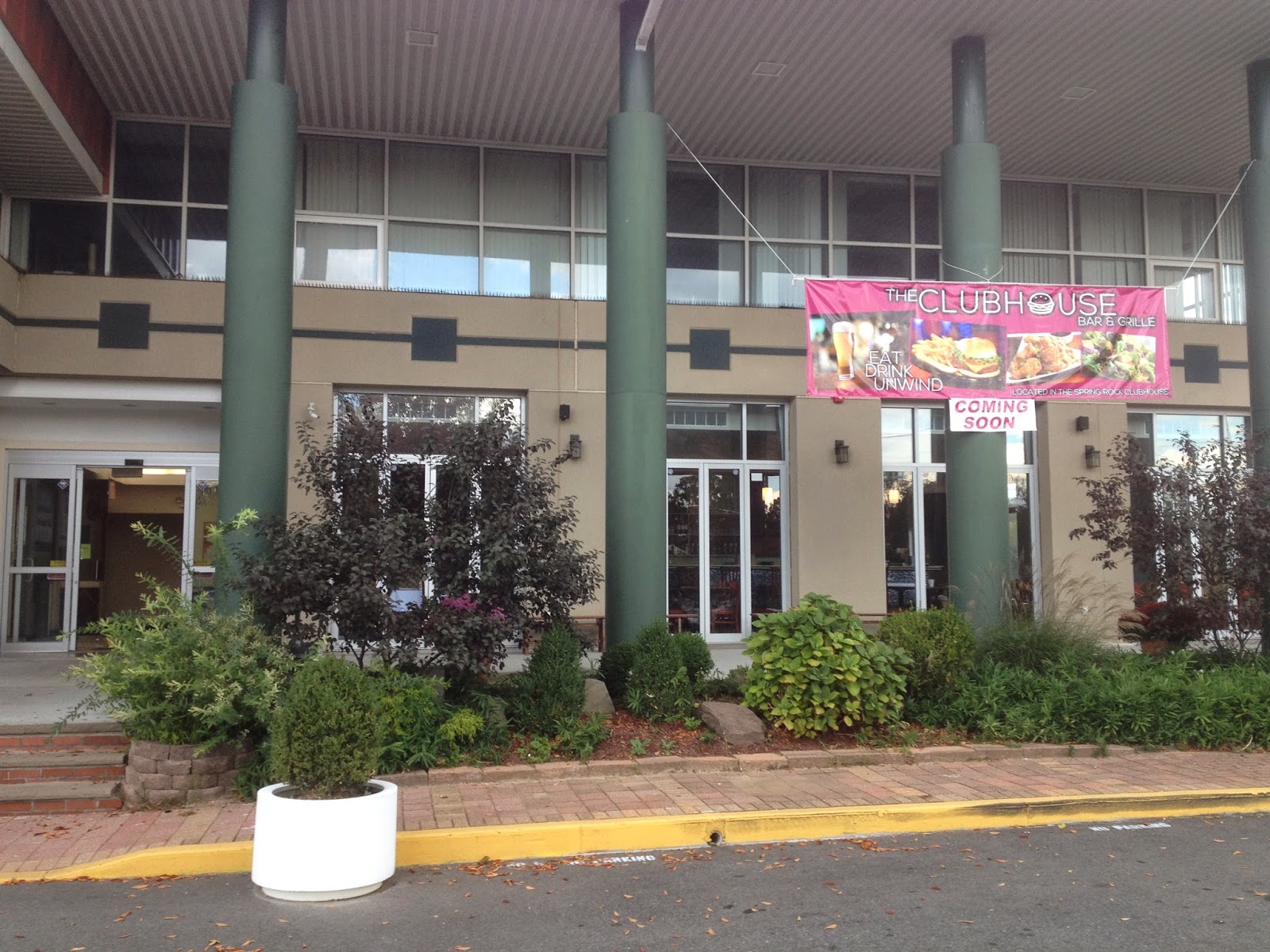 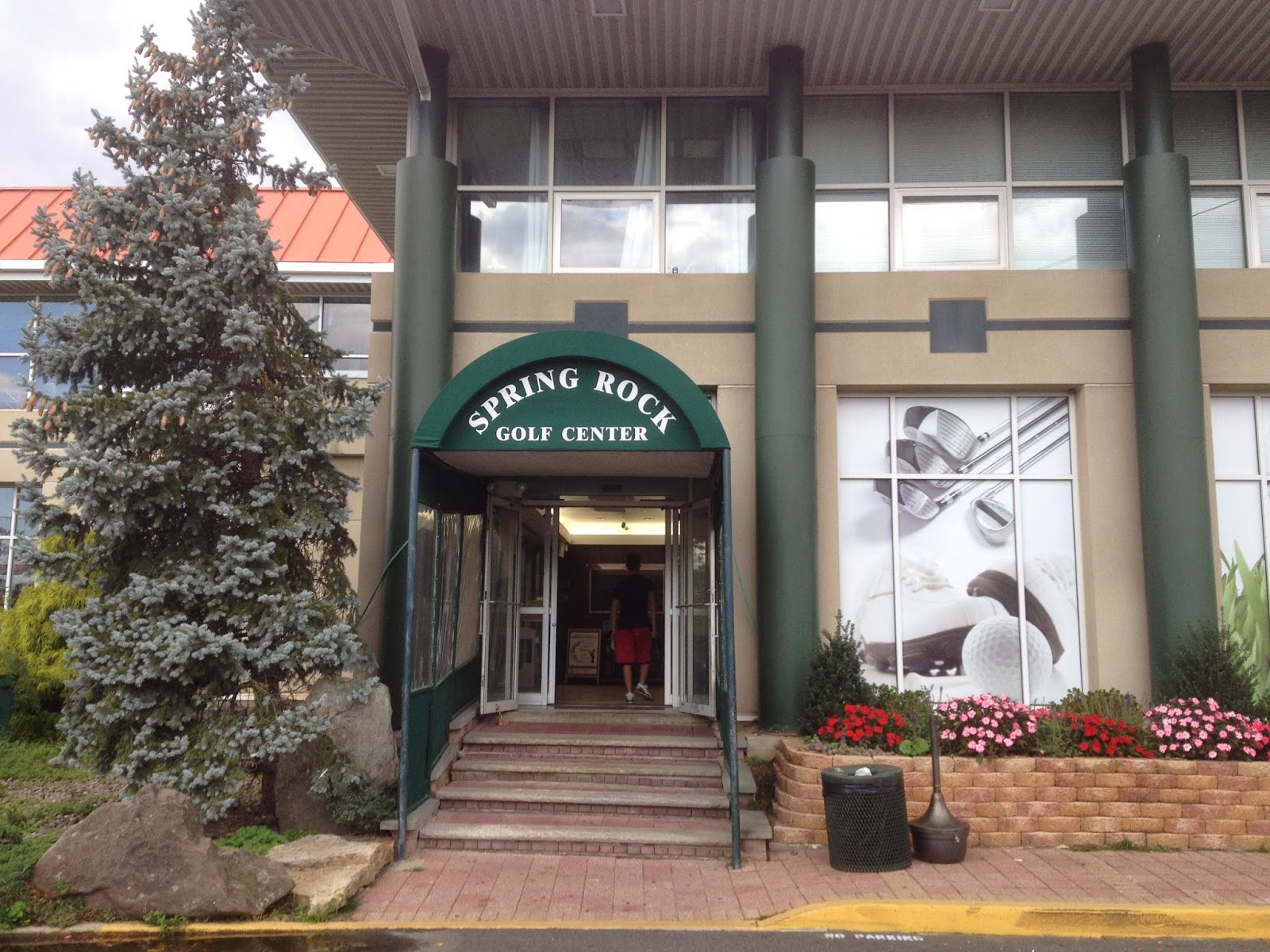 Going there meant venturing outside of New York city limits and driving farther out from civilization than we had intended, but I was pretty set on avoiding shitty, boring old Randall's Island, so we took a chance and followed the map out east. 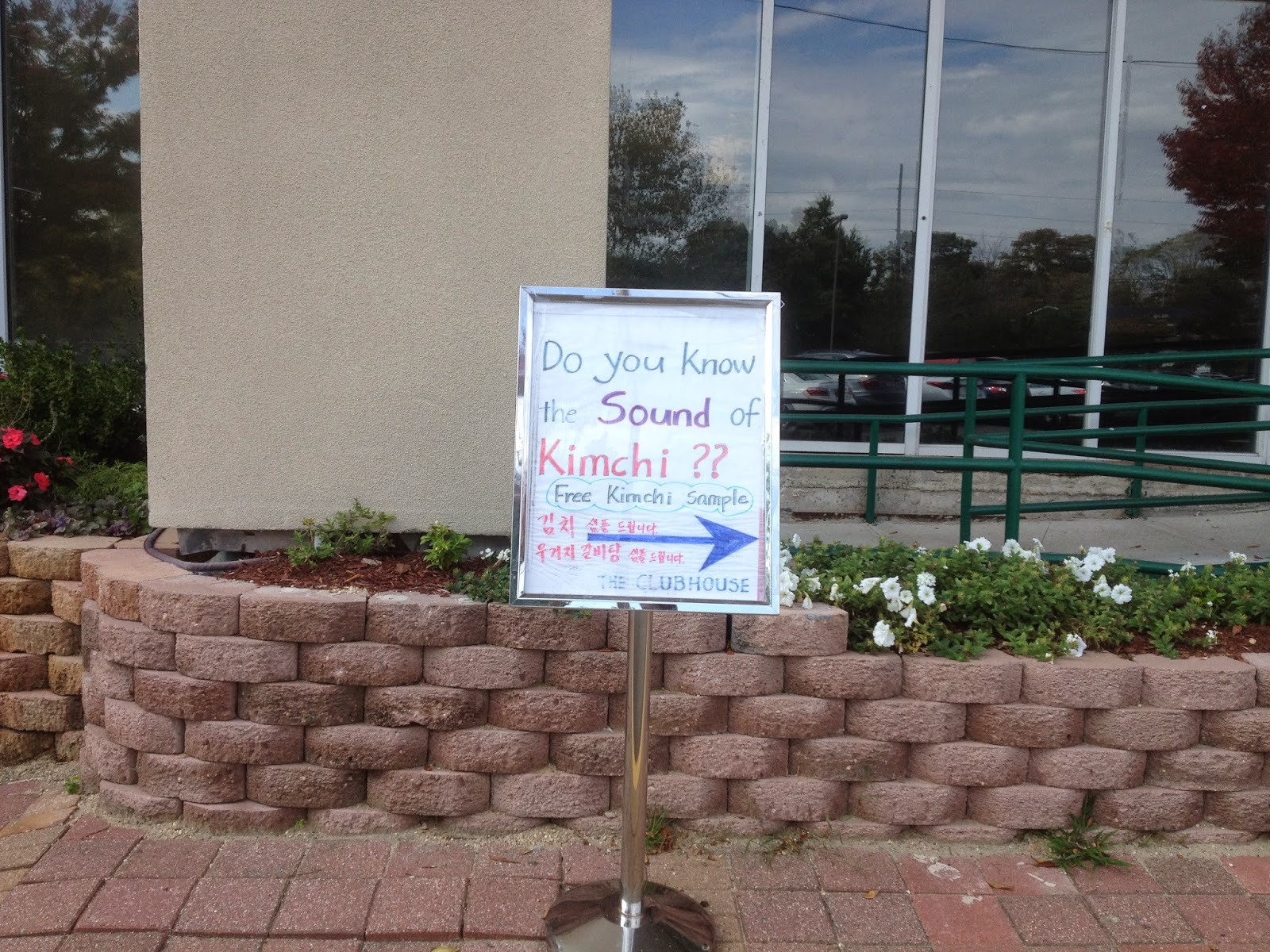 We've stumbled into another Korean Golf Mafia territory. I had thought that Alley Pond was like, ground zero for K-Golf, but the presence is even stronger here, maybe. Far as I know Alley Pond doesn't offer house-made kimchi. 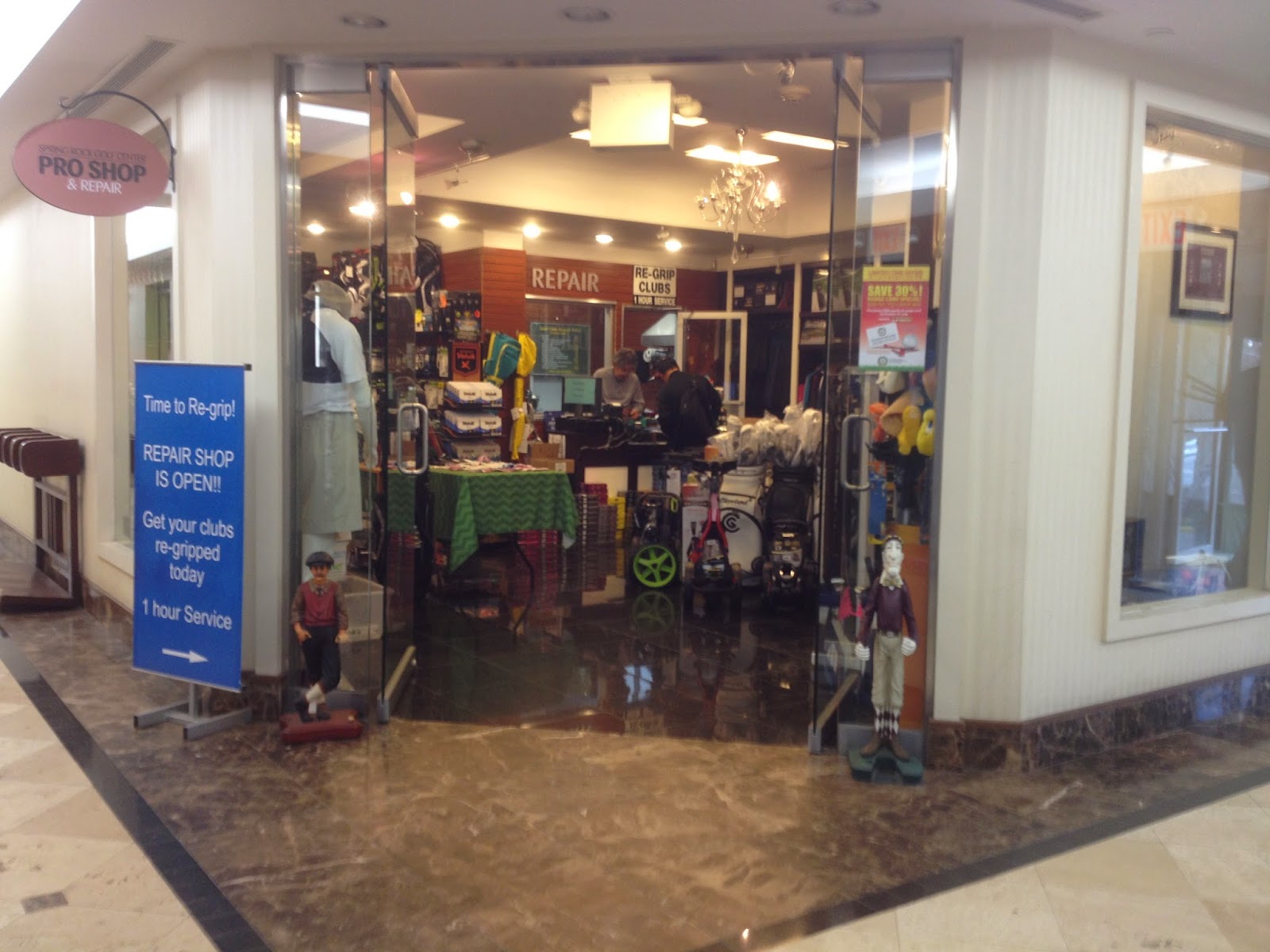 The pro shop is a lot nicer than what I'd expect at a driving range. It is becoming apparent that they take ball-whacking pretty serious around here. 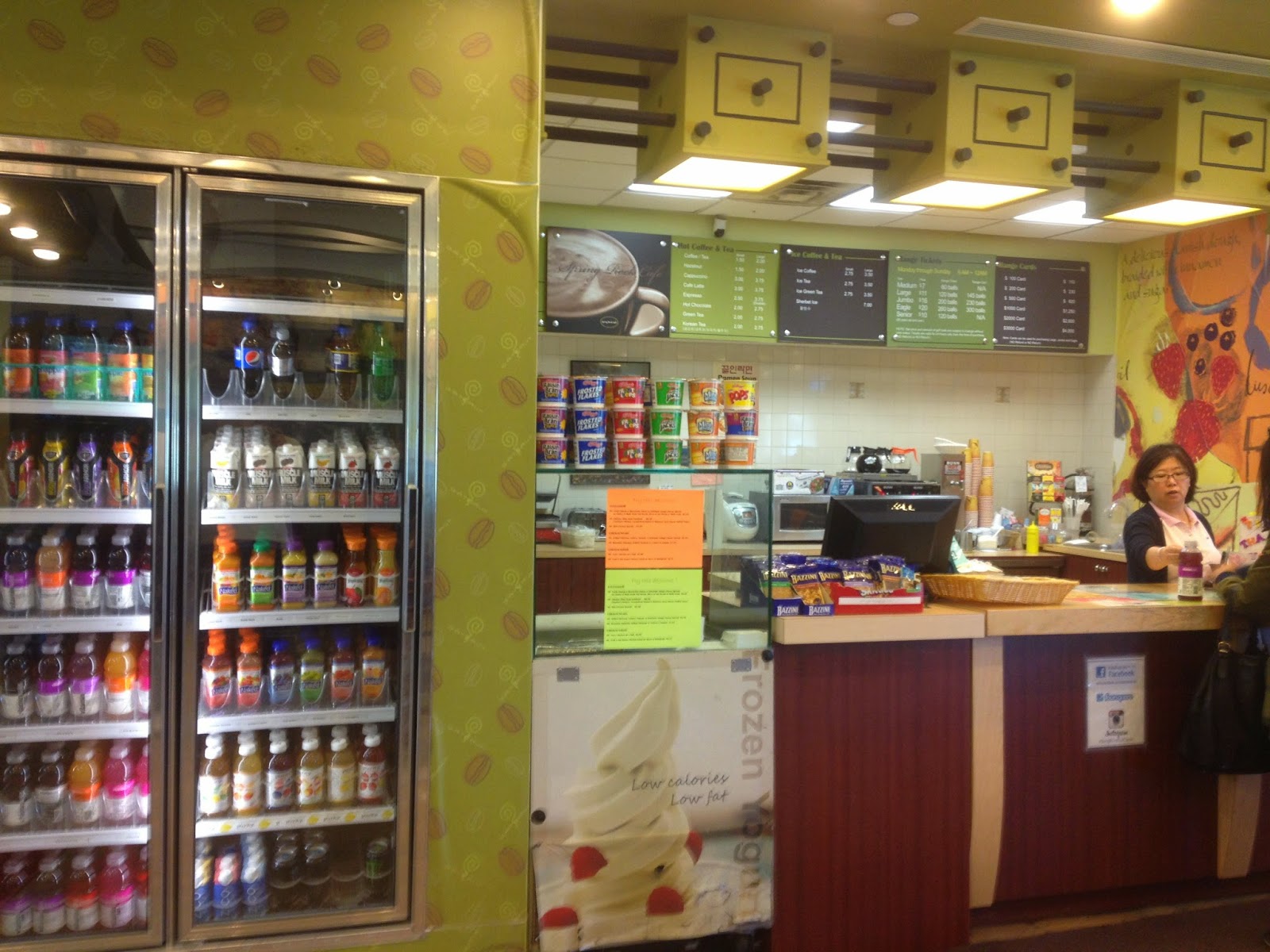 The snack bar here is also well-appointed. Easily the best beverage selection I've seen at a driving range. Plus they have ethnic treats like "frozen yogurt". 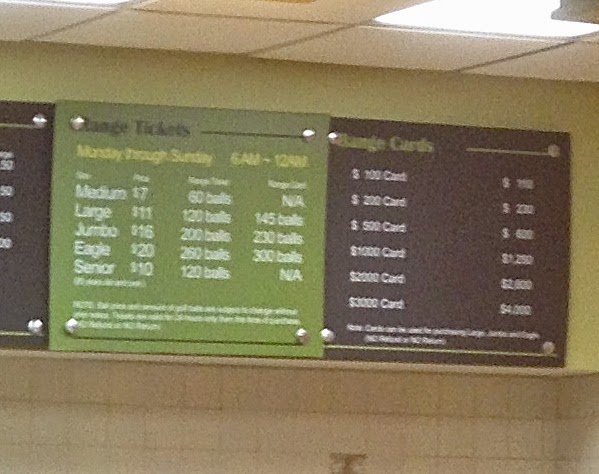 Browsing the rangeball menu, I am flabbergasted by the huge portions served here, the likes of which I have never seen before. Even try to order a "small" and they throw you right out, I bet. This is the home of the "Jumbo" bucket of 200 balls, as well as the blister-inducing 250-count "Eagle" size. If you are some kind of frequent flyer with a prepaid card, you get even more balls in your tub. That means the very largest bucket one can get here is a lower back-breaking 300-count. If you are a serious addict or rangeball glutton, Spring Rock is the place for you. 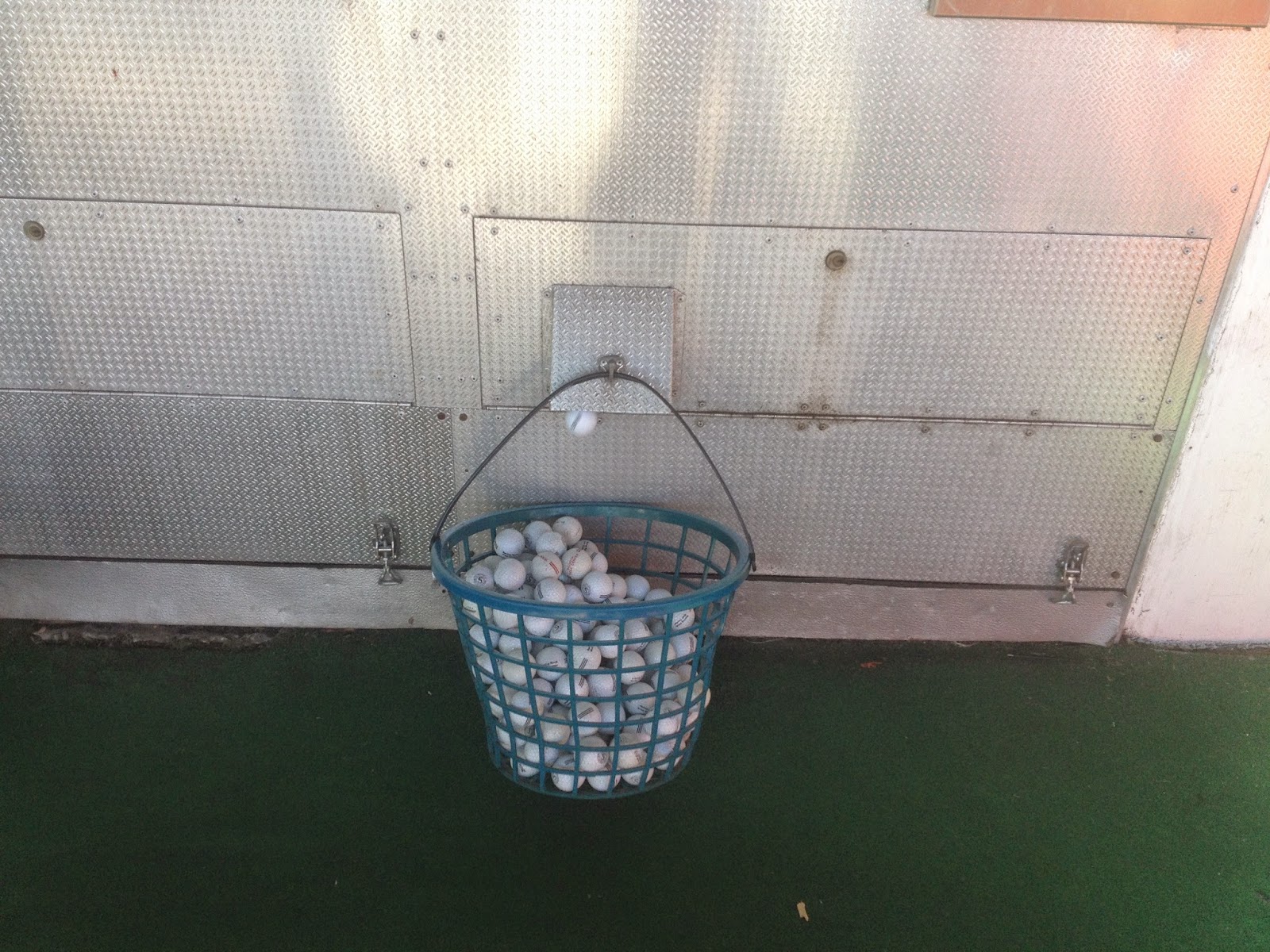 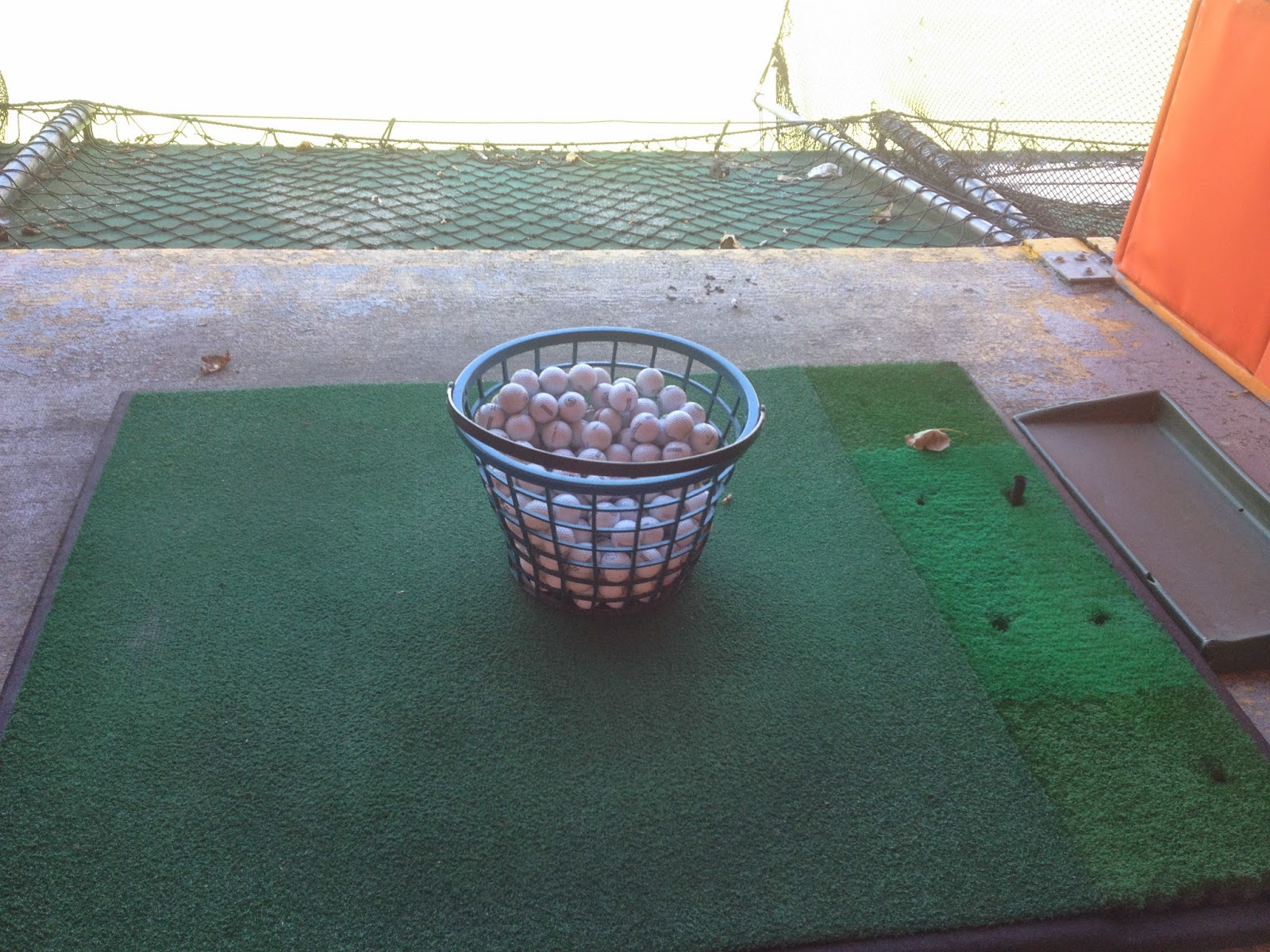 Feeling pretty good about my swing-health lately, so Ms. Legit and I split the laundry-basket sized Jumbo. It's got some heft; you need both hands to carry it around. 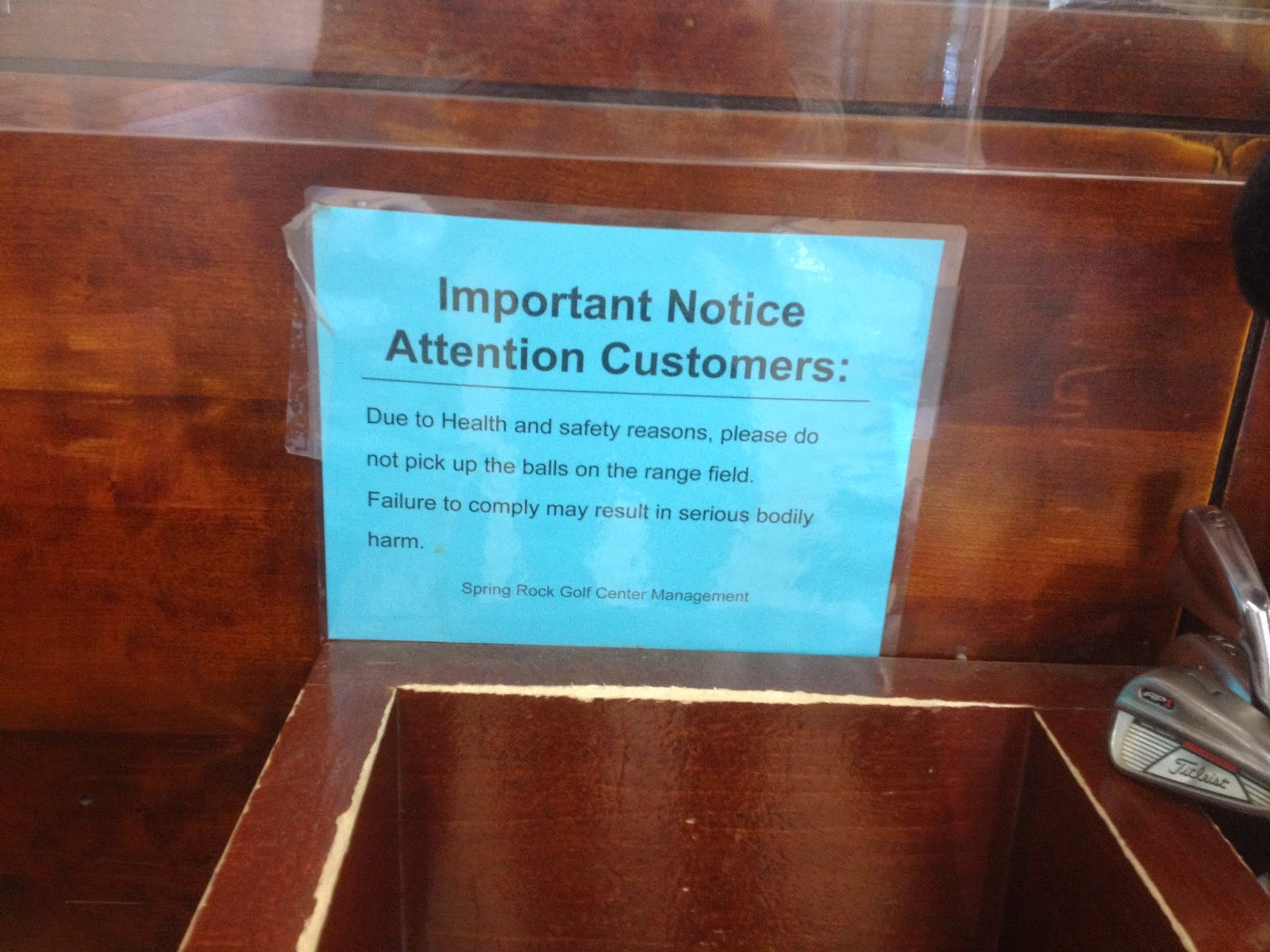 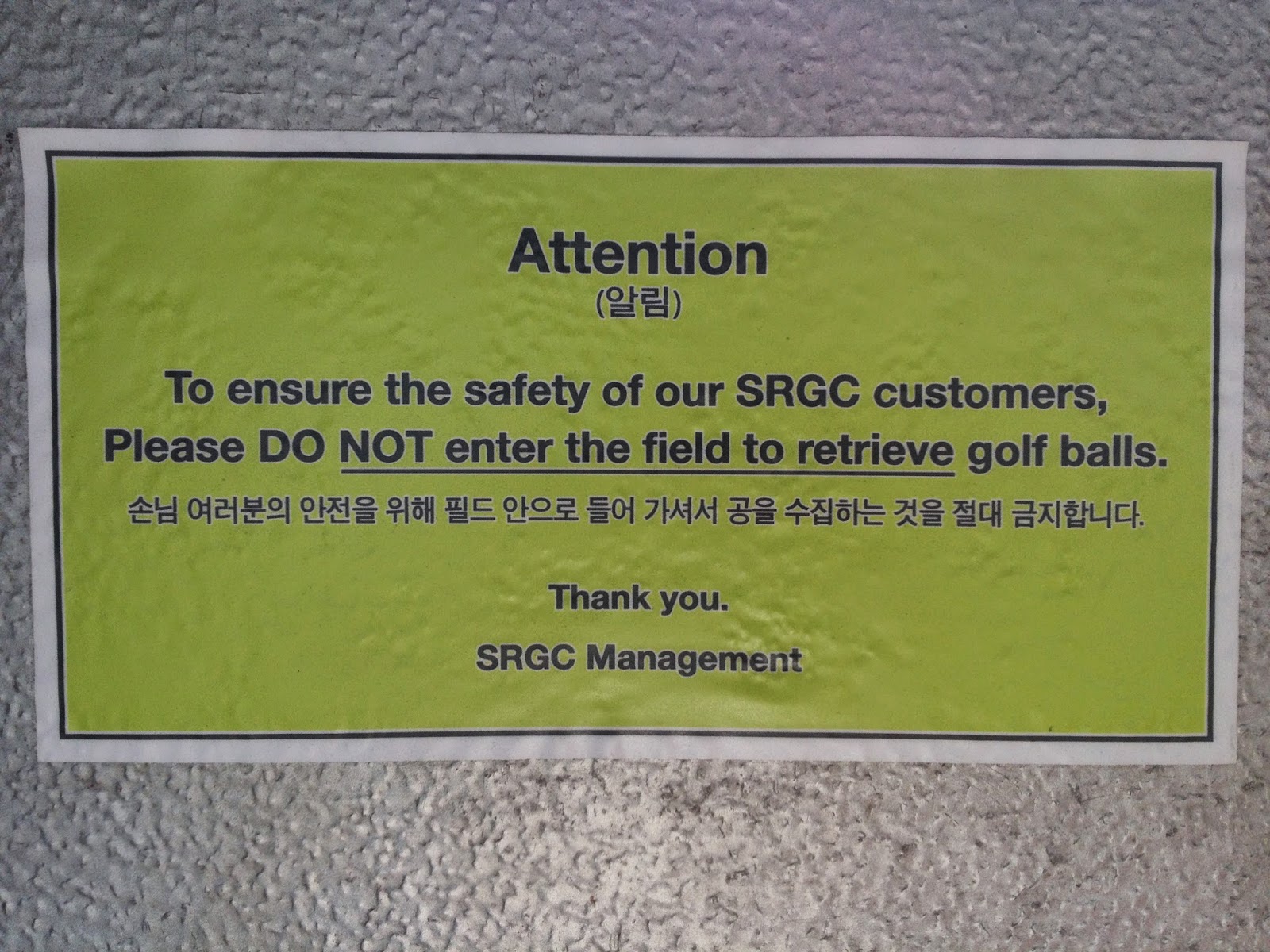 Lots of rules and restrictions here. From the number and urgency of such signs placed around the facility, I am going to guess that some poor idiot at some point did enter the field to retrieve balls and found himself some bodily harm. 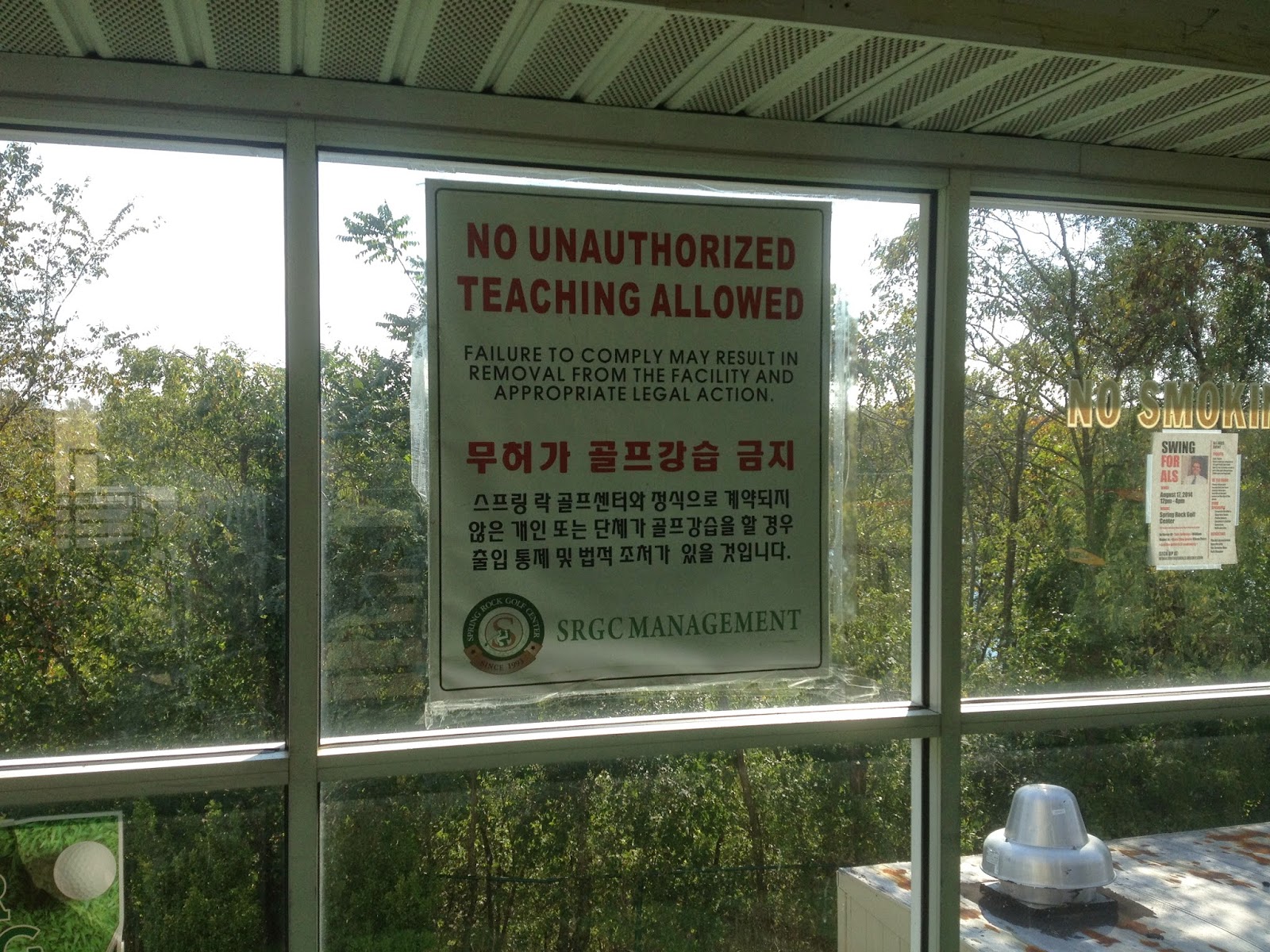 Getting struck by hard objects at high speed is hazardous, but let's not forget about the real danger here--unauthorized golf swing instruction. I really can't imagine what the "appropriate legal action" entails, but why take chances? During our session I might've wanted to remind Ms. L to widen her stance at one point, but I didn't make a peep. 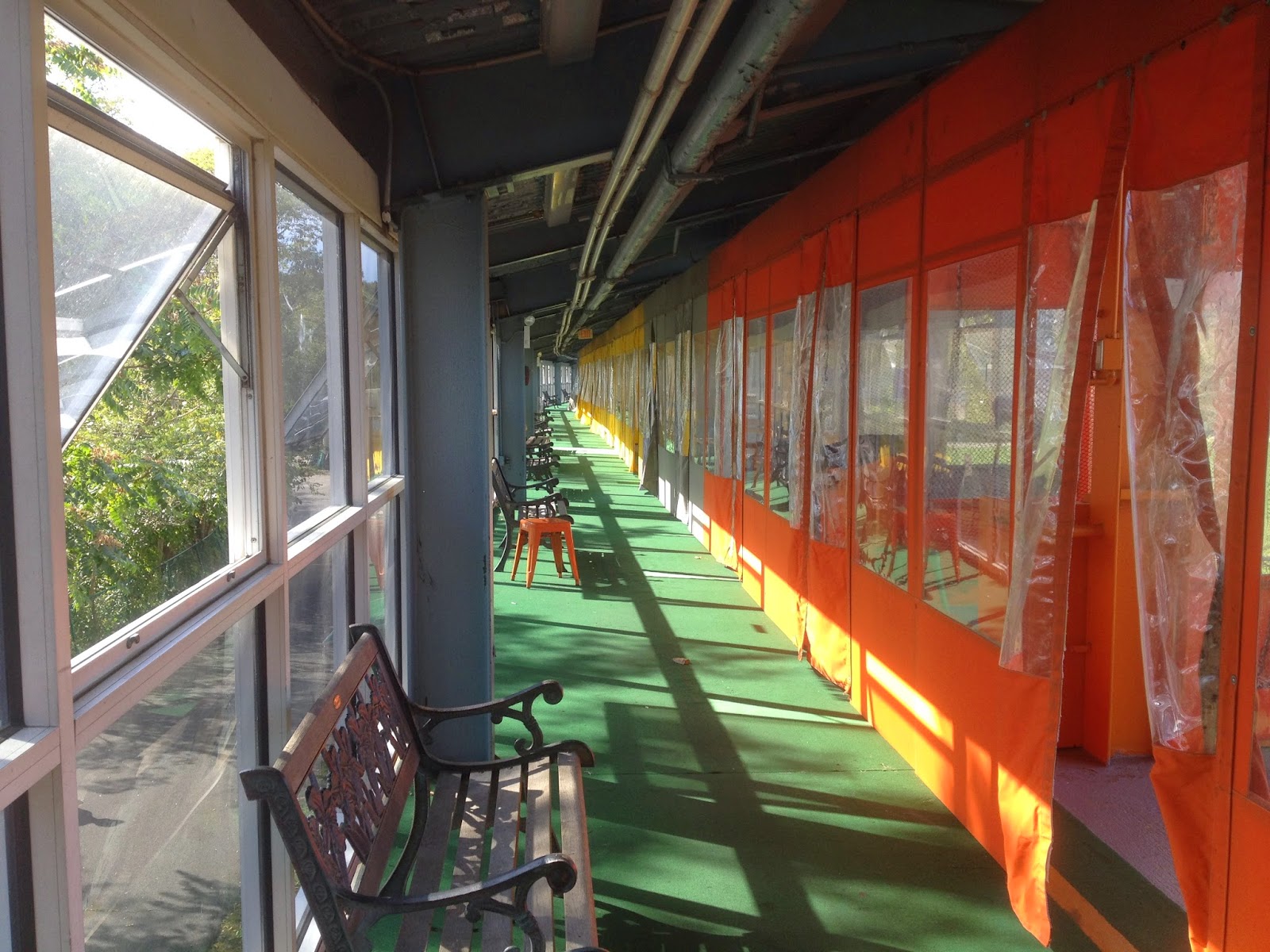 Looking down the firing line. This place is big. During a full house the din must be considerable. 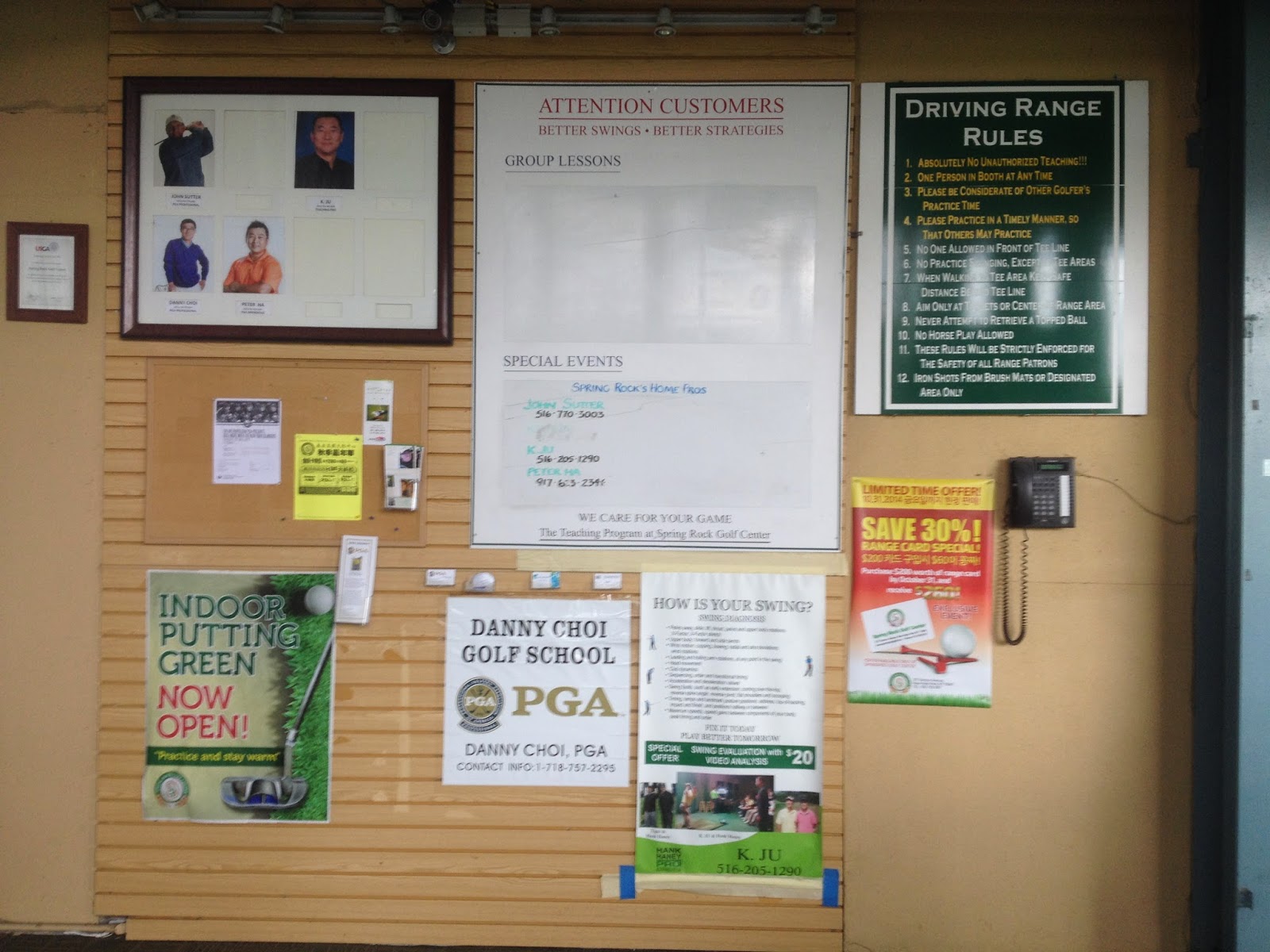 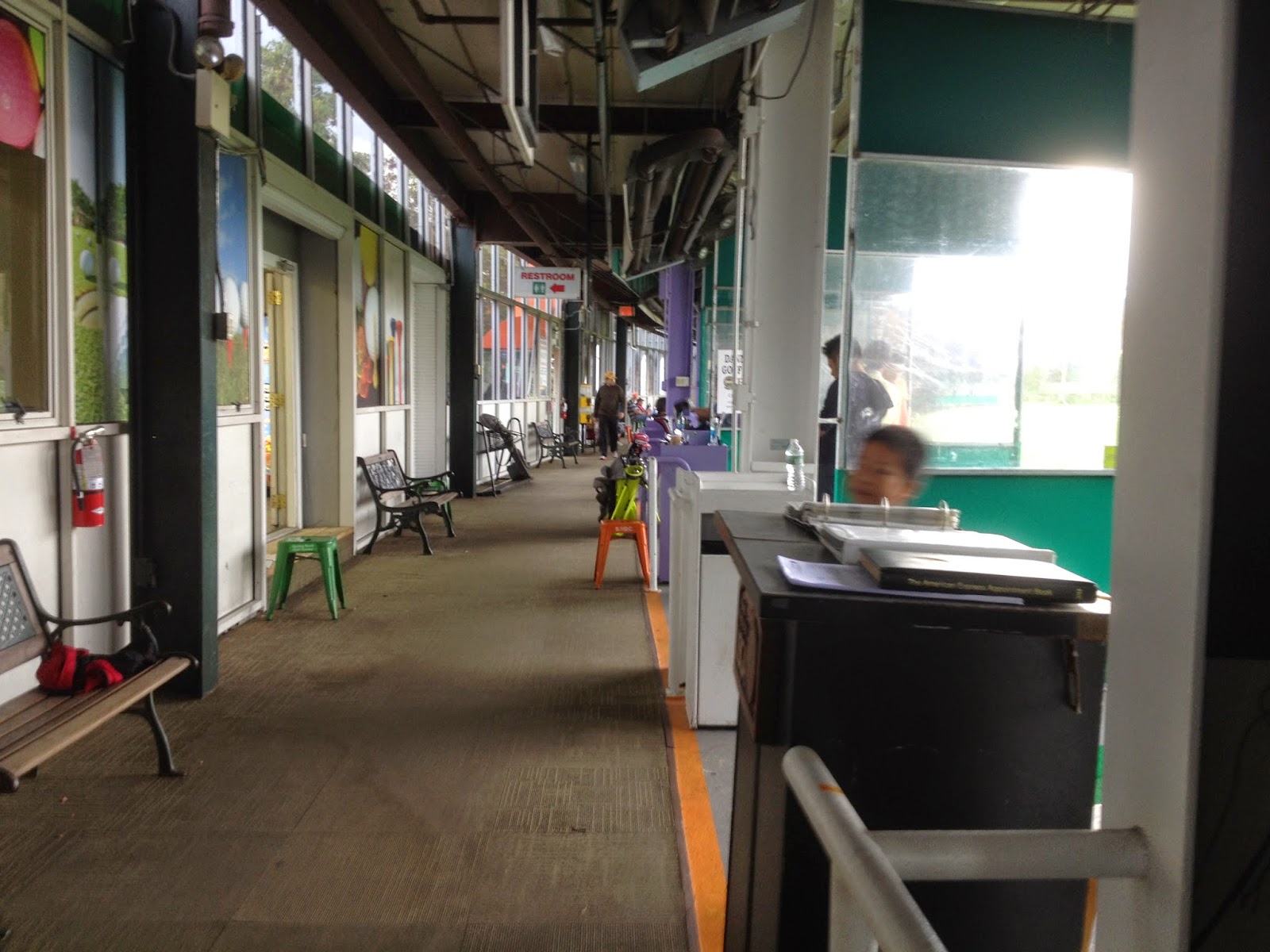 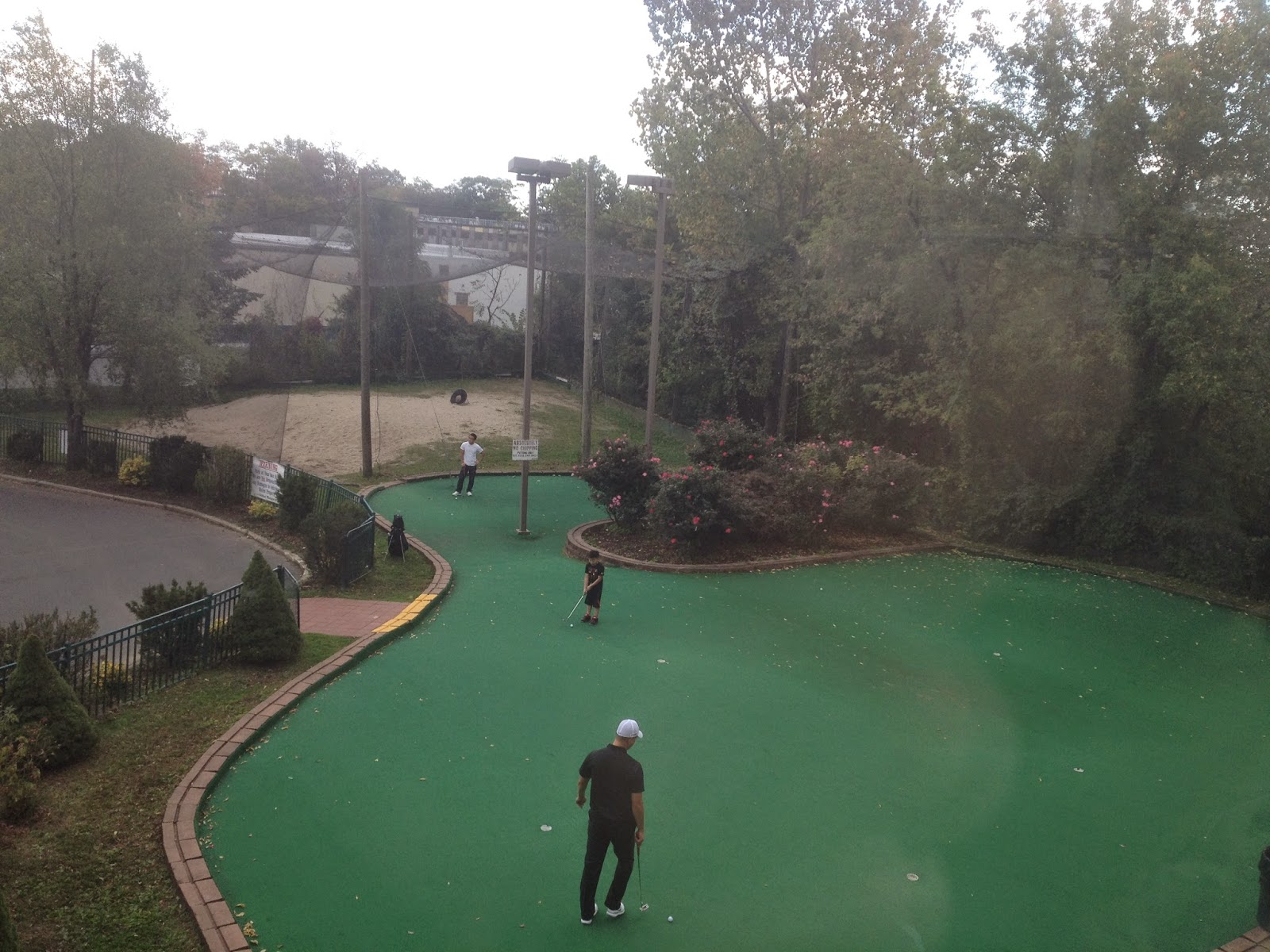 Even on a golf-weather Saturday, the place is buzzing with activity. 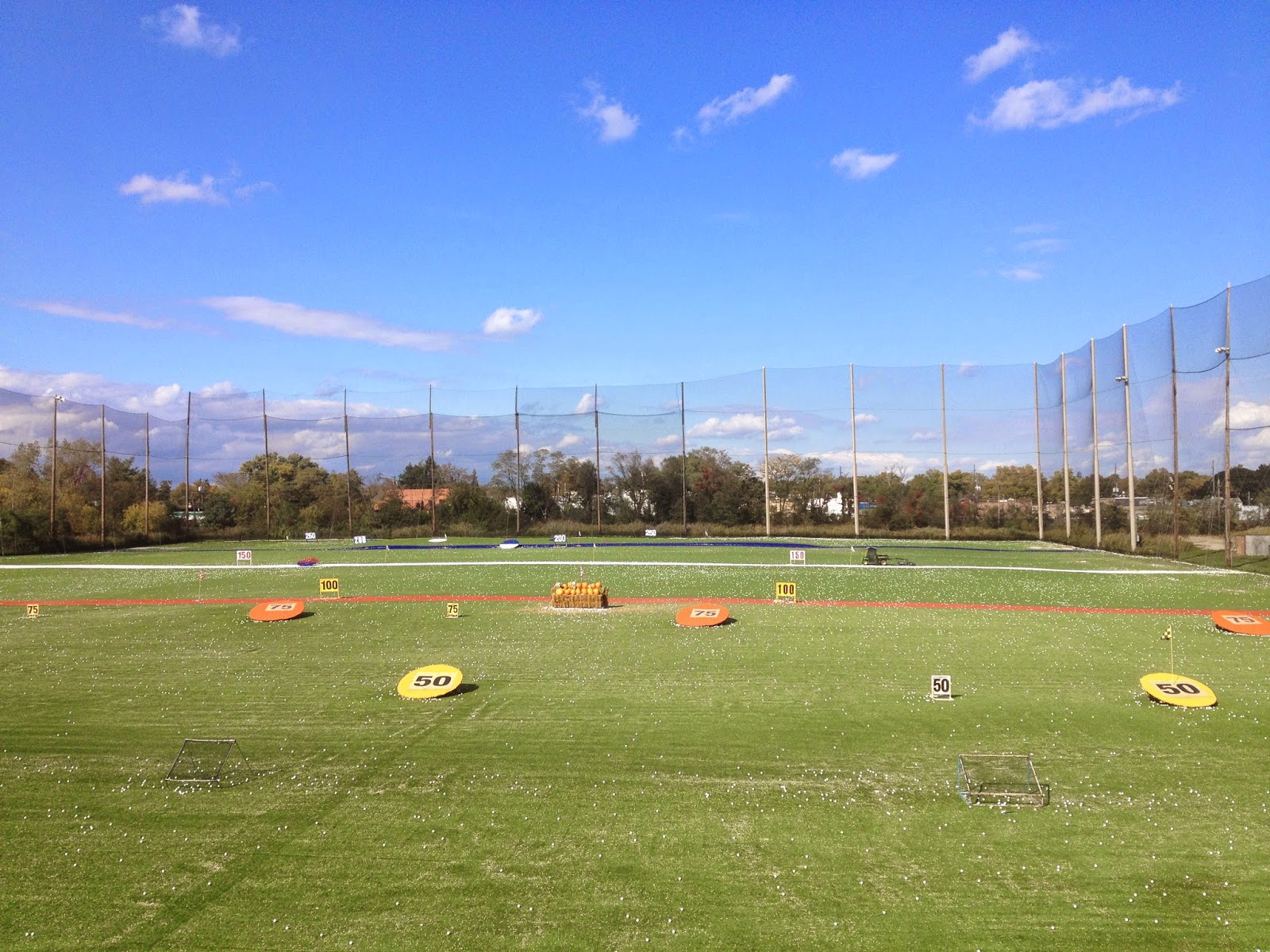 It's a pretty good driving range. The back net only goes out to 250 yards, but the field has some ample width to it. 100, 150 and 200 yards are indicated by broad stripes that run across the entire width, which make it easier to gauge distances. There's a variety of targets, including some trampolines inside of a hundred yards. For the season, there's also a festive pumpkin-based centerpiece at around 95 yards. I spent quite a few balls trying to hit the vegetables. I hit one but there was no glorious explosion like I had imagined. 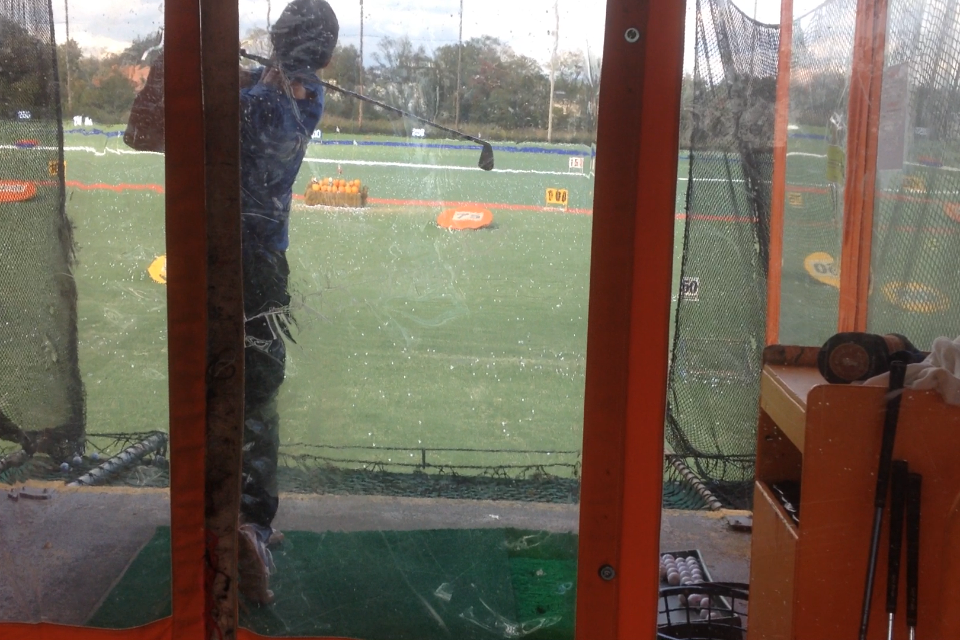 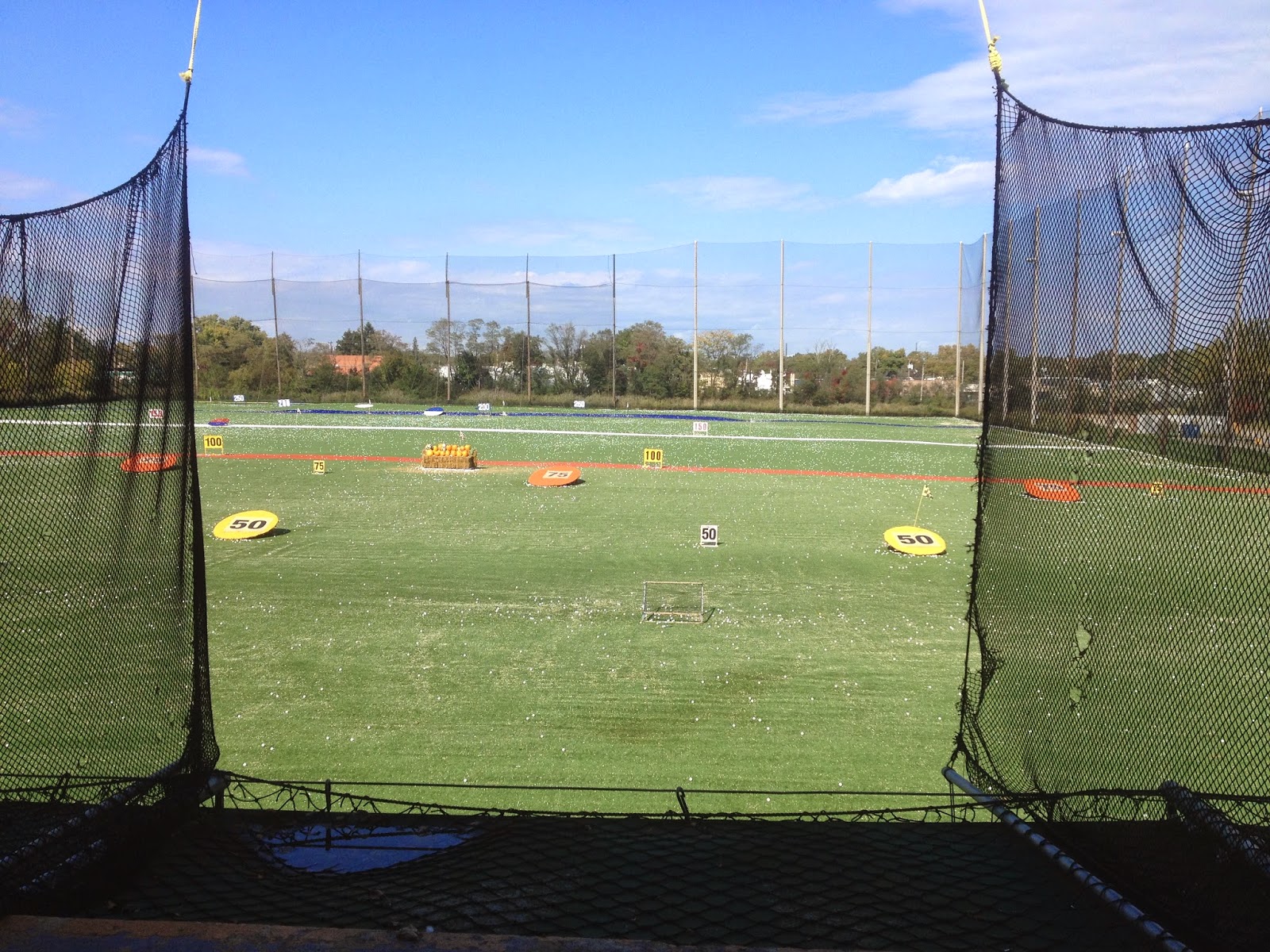 The livestock enclosures and ratty turf mats are always going to be serious handicaps, but in spite of these the SRGC manages to be decent place to pound the plastic. We both had a good time. I could've even hit a few more. 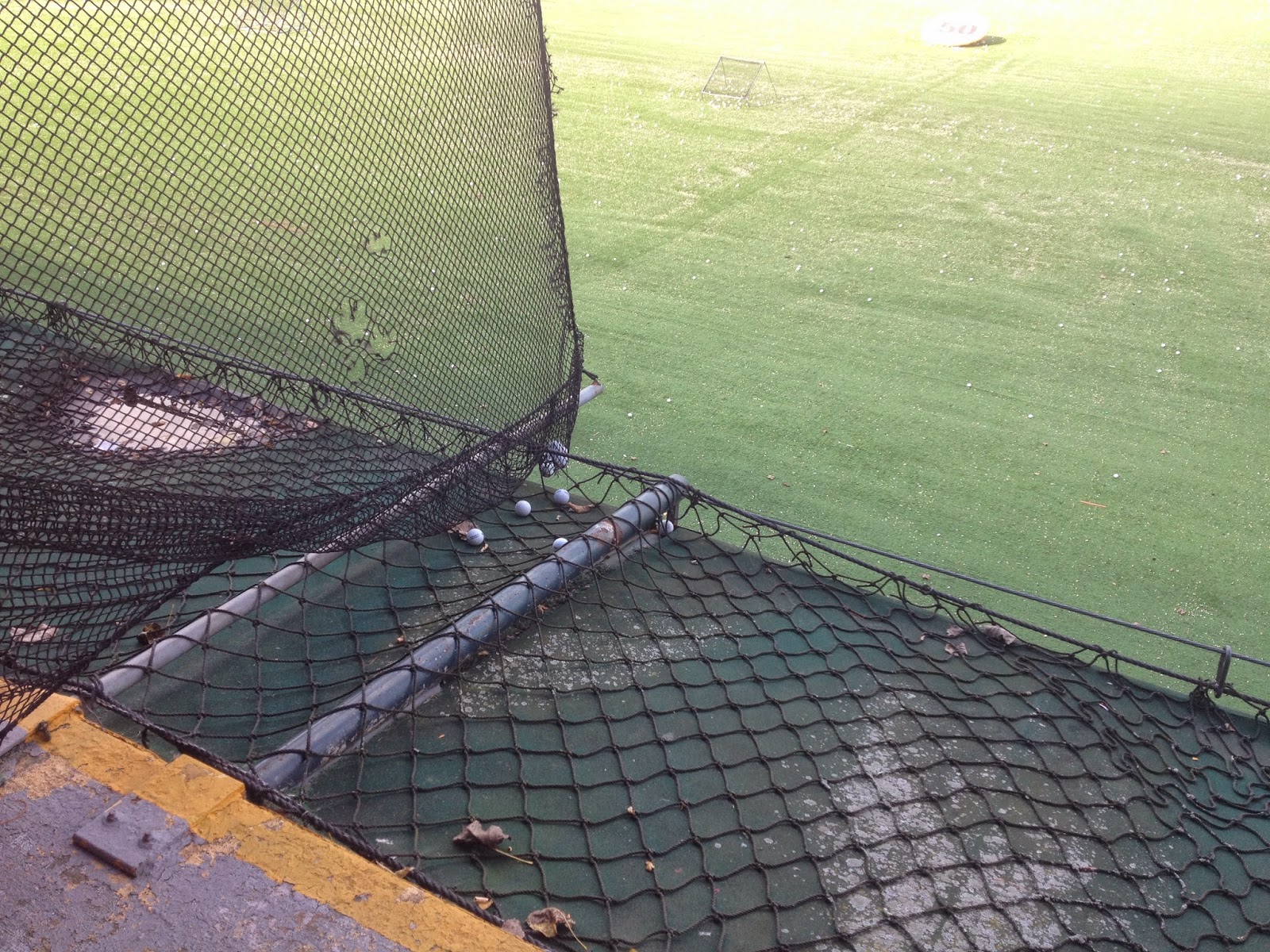 Say maybe I could just reach out and fish those strays from the overhang. 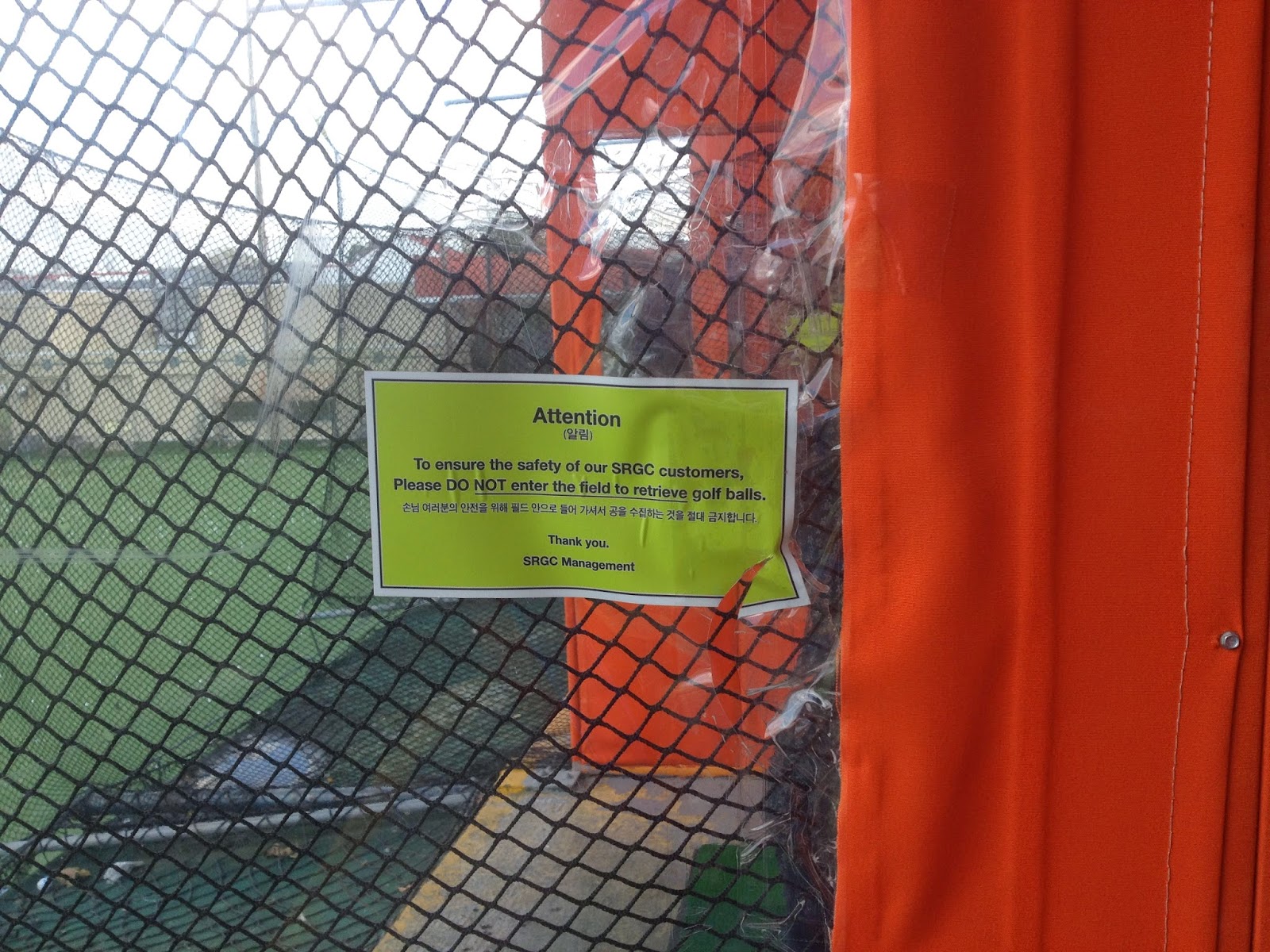 On second thought maybe that's not such a good idea. Oh well, it's time to go anyways.

Hell, I'm glad the Alley Pond was closed. Otherwise we wouldn't have found this place, which is a whole lot better than that mosquito-infested shit hole. (No offense of course.) You know what they say--when one driving range stall closes, another one opens.
Posted by Legitimate Golf at 9:06 AM