Indian Summer + the Anti-Creeps of the Week

It's hot over here this week. I snuck out for some late afternoon golf and it felt like summer all over again.


Hot weather in the fall is a conundrum. You get all the sweat and stickiness of summer, but now there's autumn leaves everywhere trying to gobble your ball. I was lucky enough to not lose any, but still a few divots managed to get lost amid all the detritus. Anyways, I had already said "So long" to the summer, but we are, sweating it up yet again. 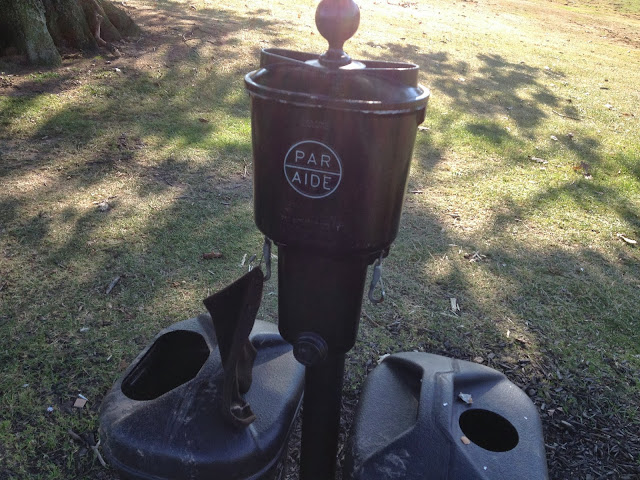 Now we all know that Dyker Beach GC has been in decline over the last few years, but this was still a depressing sight. Yes, that is indeed a man's sock attached to the ball-washer in lieu of a towel. Not even a new sock either.

As for my round, it started out great, with birdies on 1 and 2. I gave them back with some loose shots but made the turn at even par 36--pretty good for a double-digit capper. Play slowed down on the back nine, along with momentum and some morale, and ultimately we weren't able to beat the sunset. In keeping with section 5-2b of the USGA handicap manual, I posted a good score of 78 though, which brought my handicap down a few ticks.

As you know there's a big local tournament coming up in a couple weeks, so I'm glad I could at least show some signs of decent golf at this stage. Still, I badly need to shore up some things, erratic driver play in particular. On this day I suffered the thins and hit big pushes off the tippy-toe, continuing a recent trend. It's a serviceable shot, but if I am going to try to work with it I will have to practice aiming hard left, then leaving the rest to God.

Also I laid the sod over a 50 yard pitch. Considering how dry and baked out the turf was, it was a truly awful mishit that covered only about half the distance. So I really need to shore up that stroke as well.


Now, I've used up significant bandwidth attempting to out various creeps and lowlifes that I've encountered in my golf travels. So it's only fair that I also mention those who do right in this game, those who actually get it. These three are some such guys.

The love of golf among the Chinese has been swelling noticeably in Brooklyn over the last few years, and I've had my share of brushes. So when I met these three guys on the first tee, of course I had my prejudices. They turned out to be quite wrong though. These fellows were many things that I did not expect--friendly, outgoing, exceedingly polite and considerate. (I'm pretty sure they made an effort to speak English to each other so as not to exclude me.) Not sure how tight they were but they had camaraderie and enjoyed each other's company. They knew their rules and etiquette. On the fourth tee we ran up against two separate twosomes there waiting; the oldest of the three guys took initiative and pressured them to join together to make a foursome, which they did. I was deeply impressed by this.

On top of that they could play. The shortest guy in the middle put on quite a display of ballstriking and outscored everyone, and all of them rolled putts with confidence. Basically, these were some of the rare people you meet that overturn your expectations, making you realize for a moment what a narrow-minded, chauvinistic, xenophobic clod you can be. On a day when the course was fairly busy and the douche-meters were running pretty high everywhere you looked, I consider myself absolutely lucky to have been put into this group.