Far as I can tell the overswing is simply what happens when the reptilian side wins out. The reptilian part of our brain is mysterious and powerful. It's why making sweet practice swings is so easy when there's no ball or no objective at hand, and why the whole scheme changes so dramatically as soon a ball and an objective are introduced.

The overswing, I believe, is that cause of most of my own golf-related heartache. Squaring the club at impact has never really troubled me all that much, but I am absolutely dogged by various fats, thins and toe-hits. I have gone long periods playing golf entirely off the leading-edge/toe area of the club.


My top three tour guys -- Phil Mickelson, Ernie Els and Adam Scott -- all came to me with the same problem: too much backswing. They'd take the club back too far and then have to rely on super-fast hands to get it in position coming down. When they timed it right, they hit the ball a mile. But when they didn't, they missed too many fairways. Average golfers who overswing don't have the hands to save things on the way down. The result is poor contact and all kinds of bad shots. 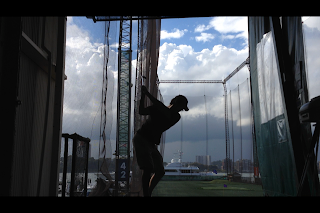 I'm a big believer in self-shame as a way to better golf, so let's look at a couple frames of my swing. What's going on here? It's a 7-iron, and I'm actually really trying hard to make a short swing. This is a couple of frames from the top, and the position looks alright by me. The clubface is a bit closed, and the path is a bit inside, but so what. For the most part it's sound enough--if I stopped the backswing here, I'd have a decent position at the top with the club short of parallel and pointing slightly left of the target. 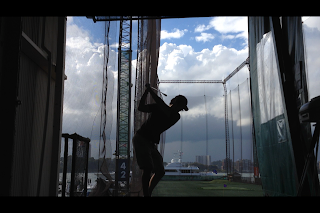 But a couple of frames later the overswing rears its ugly head. The arms have outrun the shoulder turn and the right elbow elevates, putting the shaft parallel to the ground, not to mention well across the target line.

I sought counsel on the internet. I searched for thoughts and opinions on the overswing, of which there are plenty. I tried to find out if there is some basic psychic impulse behind it, that could be somehow tamed or re-calibrated.

But probably the best advice I found came from a rogue instructor and former long-drive champion named Monte Scheinblum. Basically, he urges simple persistence. On every swing you take, make an effort to make a shorter swing. Every swing--on the course, on the range. Just keep at it, take the long view, and satisfy yourself even with tiny increments of progress. And if you persist, in a few months' time people will probably notice your swing looking shorter.

This is just the kind of bare-bones, slap-in-the-face advice I needed. As soon as I read it I realized that I had fallen into the trap of seeking the quick fix. As Mr. Scheinblum suggested, it's stupid to think that a habit ingrained over years could be remedied with some kind of easy solution.

I'll keep working on it, but at this point I have to be careful not to try and force too much change. With the big tournament coming up, probably the most important thing for me is swinging freely.

Any thoughts on overswinging are appreciated.
Posted by Legitimate Golf at 9:37 AM