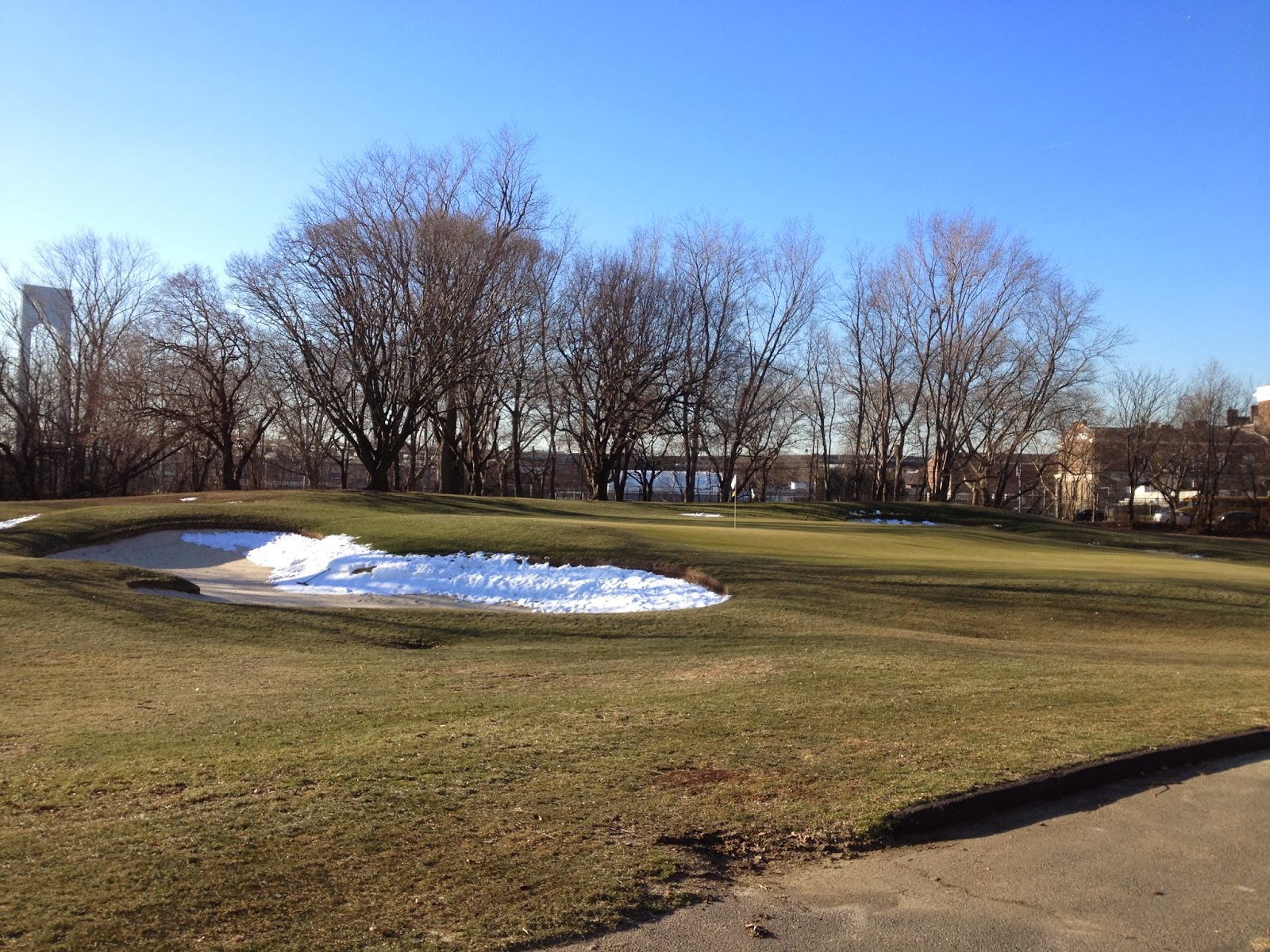 A couple days of warm and rain at the start of the week here turned out to be a gigantic boon--it cleaned up most of the snow cover, which had gone all dirty and granulated and hard. More cold temps followed, but a brief window of opportunity opened up late in the week. Now most people probably wouldn't consider 30° F an "opportunity" but hey it's your old pal Legitgolf. Master of layers.

See, golf's great because it's a winter sport and it doesn't even know it (apologies to the late Mitch Hedberg). Seriously, you tell people around the water-cooler that you just got back from skiing in sub-zero temperatures and that makes you some kind of a cool guy. But talk about playing golf anywhere near the freezing point of water and you'll be considered some kind of lunatic. Where's the logic in that? I don't see it.


Out of curiosity, I called up Dyker Beach to ask if the course was operational. I wasn't much expecting good news so the positive reply was a surprise. "All eighteen greens???" Indeed the whole thing was open. It was getting kind of late into the afternoon but if the place was empty, all I'd need was a couple of hours to get to the finish line.

And it was. When I opened the door to the pro shop I think I startled the guy working there. I was the eighth person to go out that day. A couple holes ahead of me I saw two guys riding in their hermetically-sealed cart-slash-hotbox, part of the ever-present gang of crusty regulars whom I see here about 98% of the time, no joke. 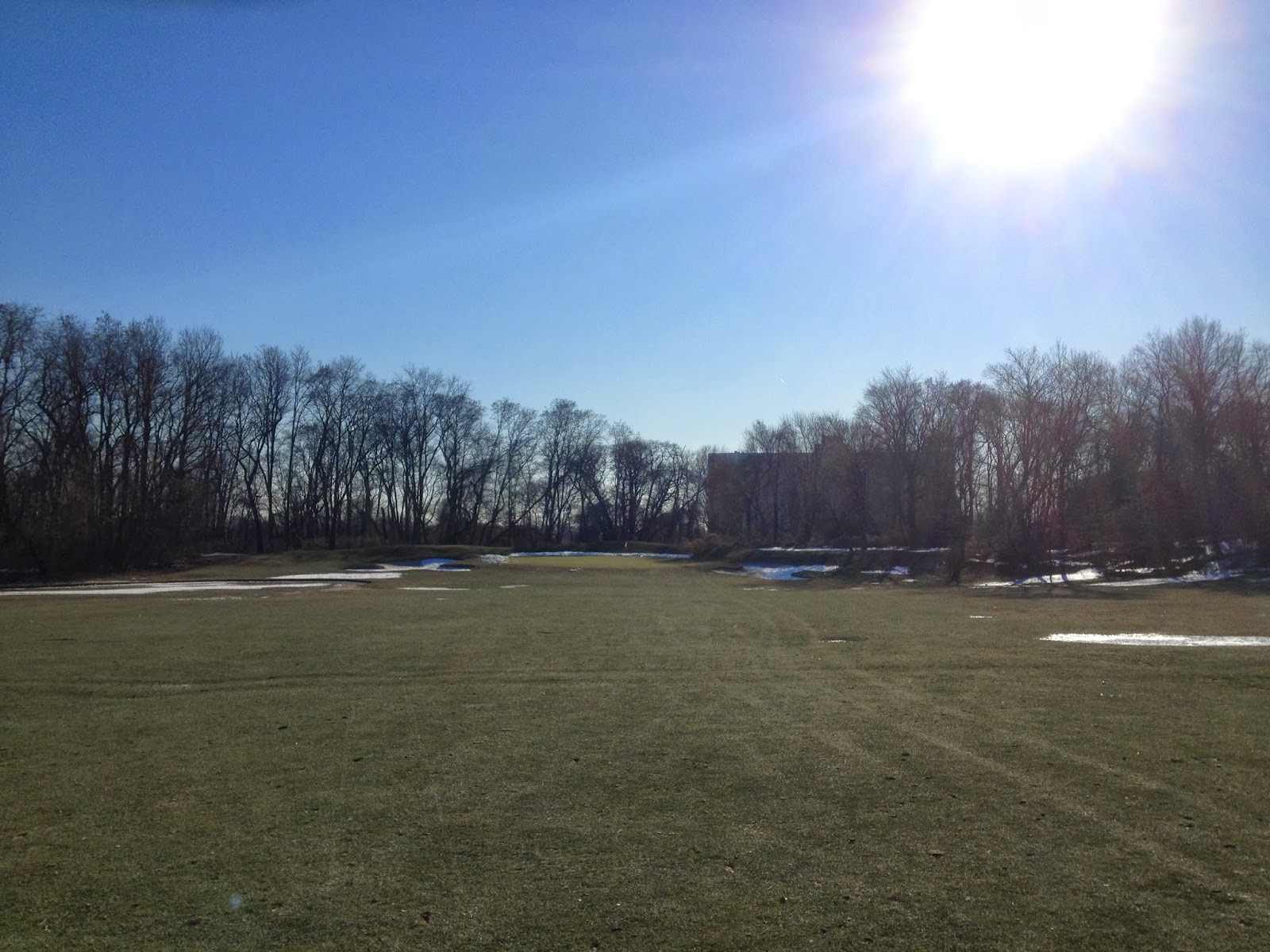 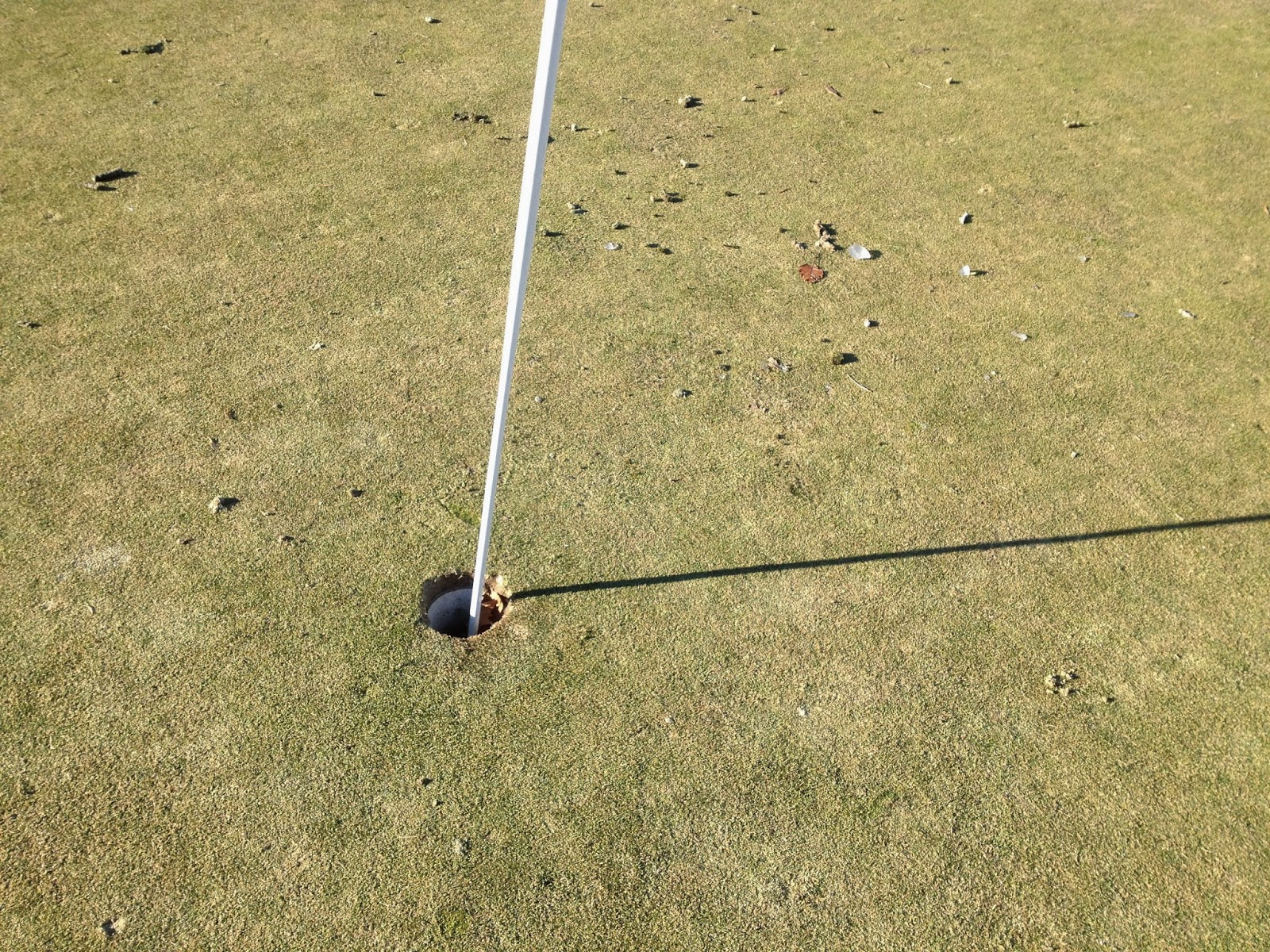 It was interesting to take in the conditions. I was last here not too long ago, at the end of '13 at which time the turf was still green and lush, practically in mid-season form in places. But since then the grass has gone straw-colored and dormant. 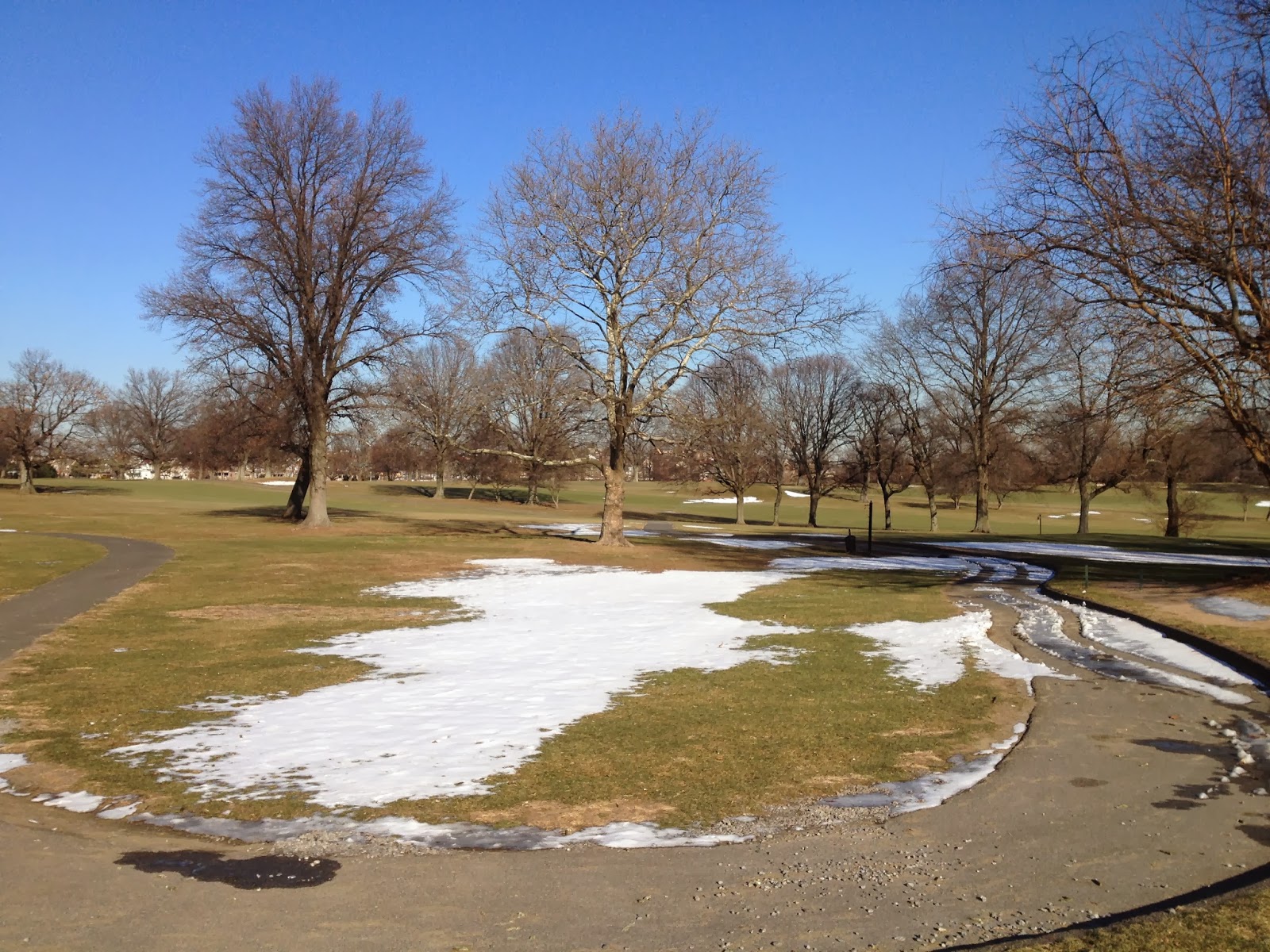 Some healthy snow patches remained in bunkers and other cooler areas on the course. There were also glass-hard sheets of ice in some places, and slipping and winding up flat on your ass was a real concern. 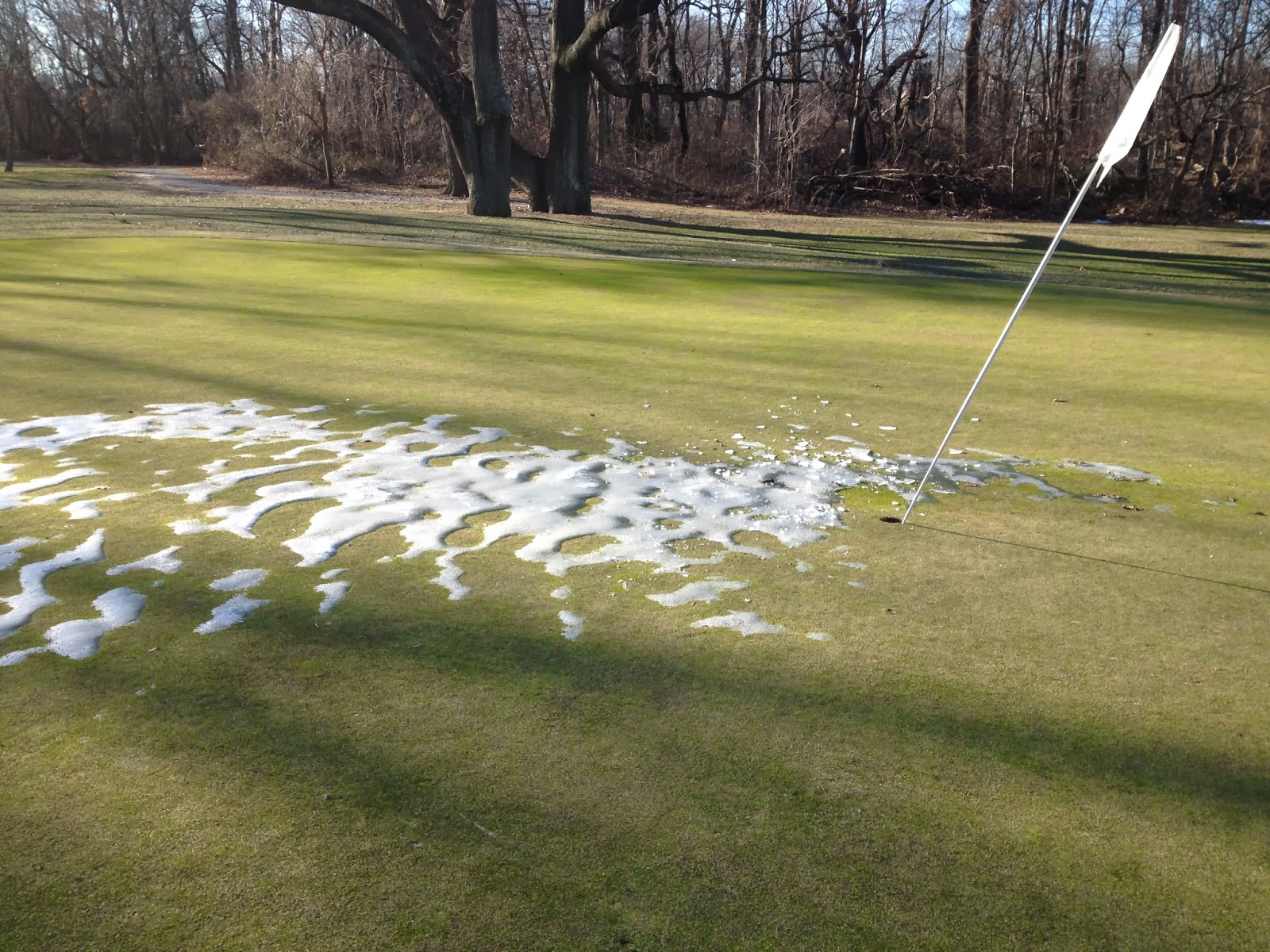 The greens were mostly playable, except for bits of leftover wintry stuff here and there. I actually putted over some of it, not realizing that casual water that has frozen solid is still indeed casual water. Or that water, in its frozen state, can be actually be considered a loose impediment. Learn something new everyday, right? 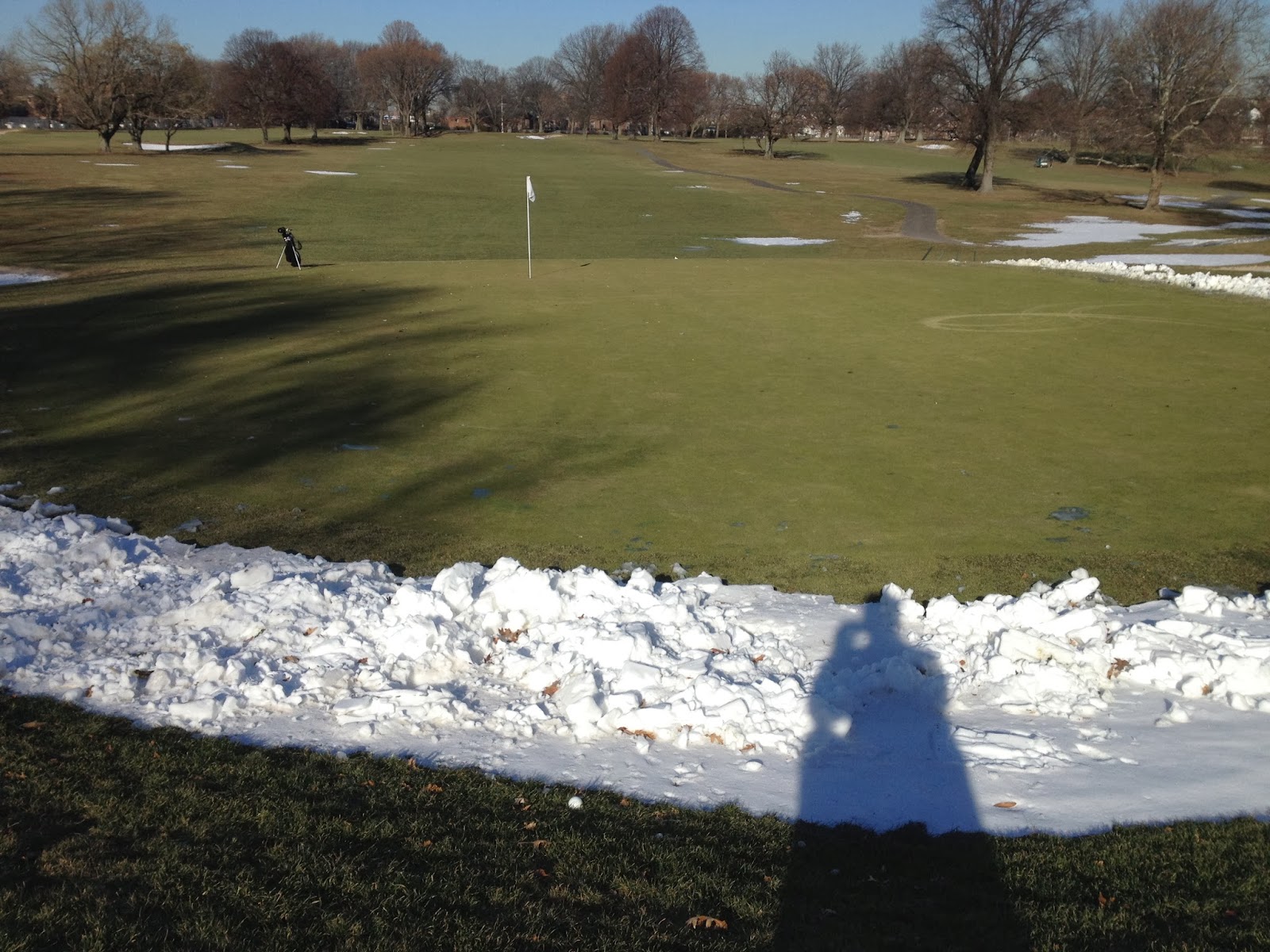 I've played in this kind of cold before but never when the earth was this frozen-solid. On the first hole I sent a well-struck 9-iron into the heart of the green. I was lost in the reverie of watching a ball sail toward its target; then it bounced a good ten feet in the air and clear over the green. I gasped. I've heard accounts of balls bouncing off frozen greens but this was my first time experiencing it. I chuckled, more impressed than upset. 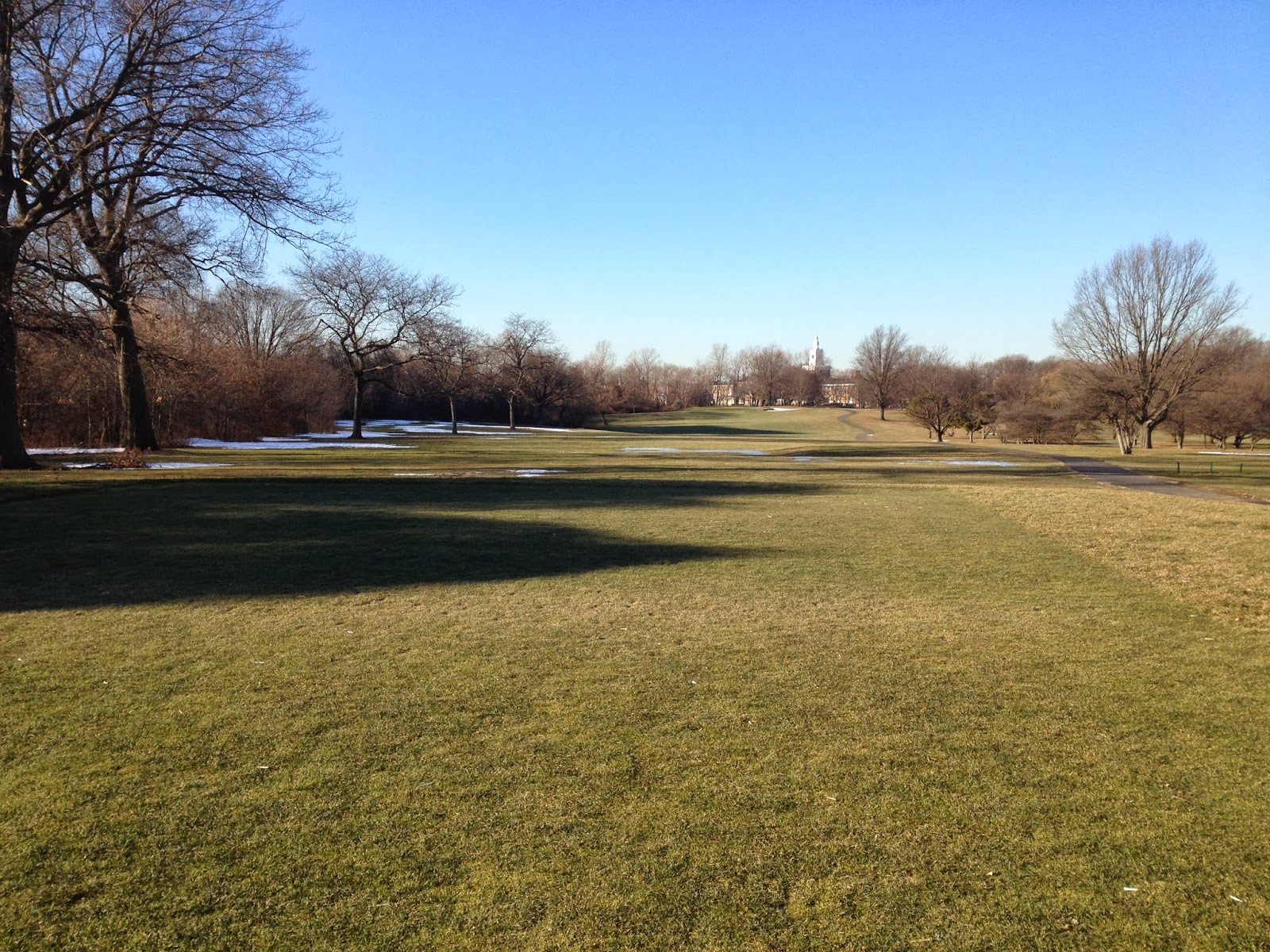 Teeing a ball was one of the big challenges of the day. I'd kneel down, trying to use all my weight to drive one in, twisting and screwing, hoping for just a centimeter of purchase. I was thankful to just get through the day without an impaling mishap. The ninth tee sits in shade and was so frozen solid I sweated for a couple minutes trying to penetrate it. Finally I gave up, set the ball on the turf and hit 3-wood instead. 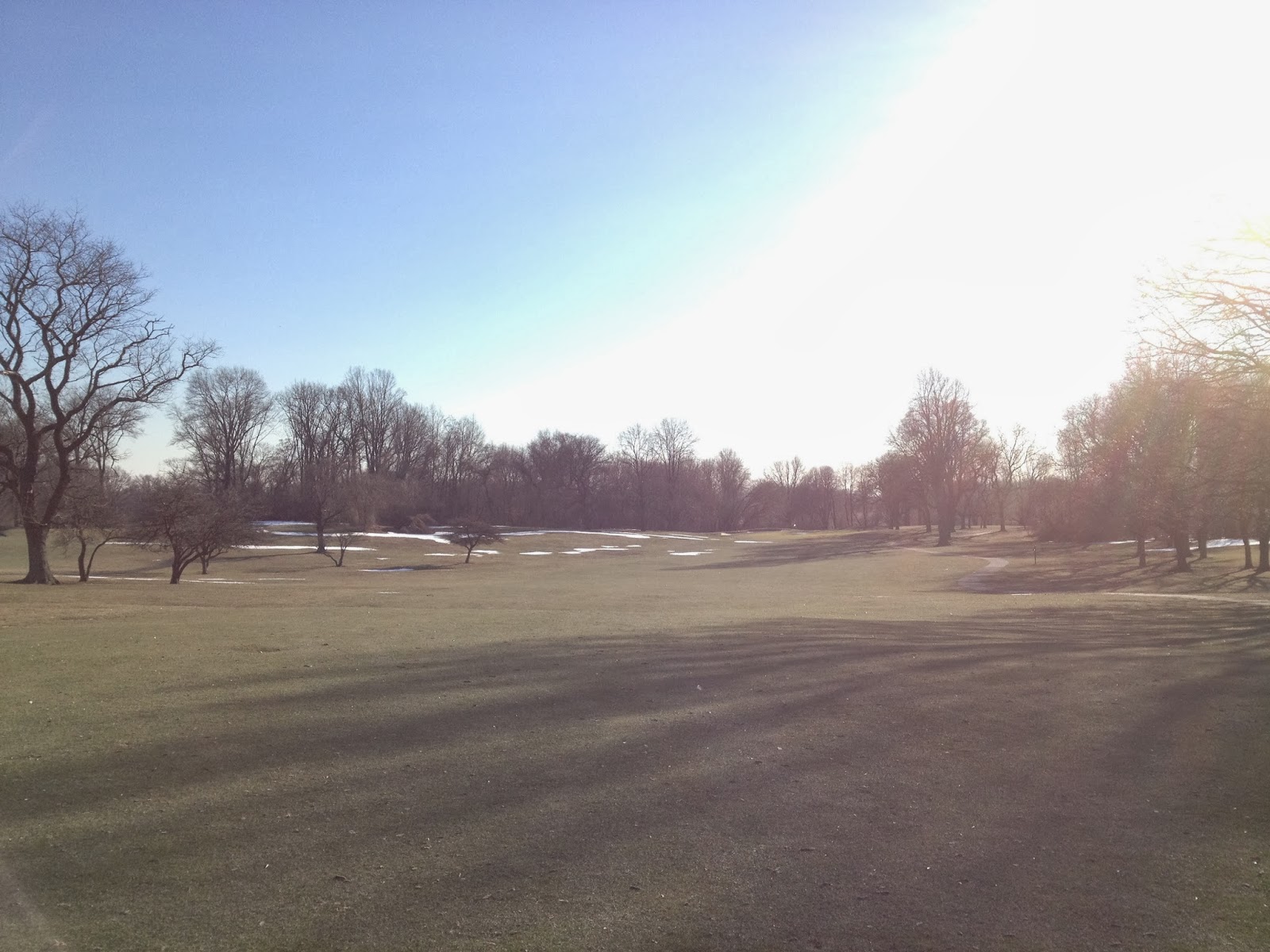 Other than that the fairways and rough were delightful. Just soft enough to yield a divot but firm enough to offer a touch of forgiveness to chunky shots.

Over most of the front nine I was surprised at how well I swung it, how good everything felt and that trying to negotiate these conditions was actually kind of fun. You had to try and land the ball short of the green and bounce it to the hole. Another challenge was reconciling greens that felt hard as sidewalks but rolled more like low-shag carpets. I took it all in good spirits and why not? Conditions are always changing, throughout the whole year. 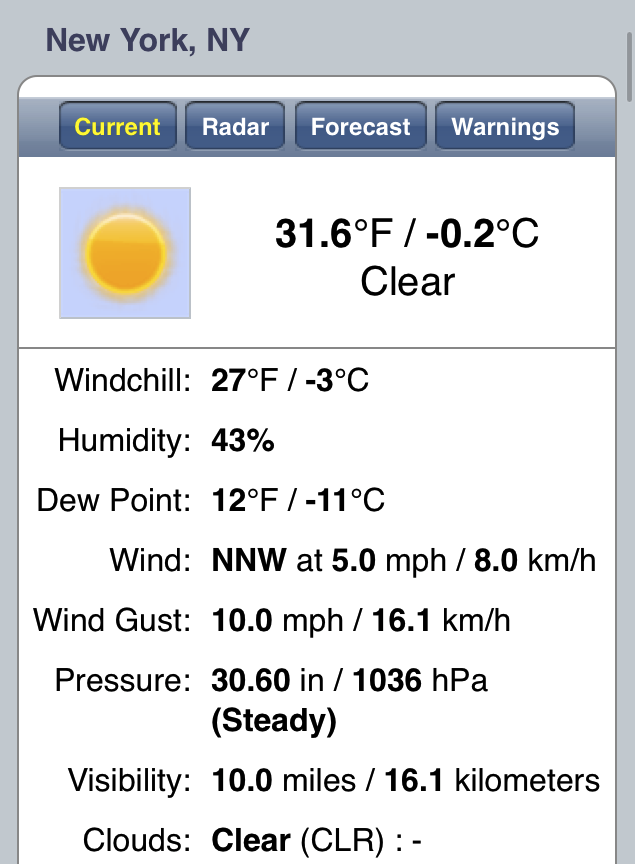 That terrible cold spell of last week changed me physiologically I think, because I felt great out there in the 30° air. No toughguy posturing, I really did. It's all about the layers. Said it before, I'll say it again--modern synthetic fabrics represent one of mankind's greatest feats.

The plan was to finish in time to catch an express bus back to Manhattan which meant I had a hard-out and needed to play in under two hours and a half. If all goes smoothly in a given round it's generally more than enough time. But as in a lot of my rounds this winter there were snafus to deal with and I ended up straining the schedule to the limit by running around the course like a chicken with no head.

On the third hole I managed to lose a tee ball in broad daylight--used up my five minutes searching, cried about it a little before finally running back to the tee to hit another.

After finishing the seventh I couldn't find my right-hand winter glove (which I wear in between shots to keep warm), so in a panic I ran 420+ yards back to the tee. No dice. And now I've worked up a sweat and fuming over losing yet another glove (it's been a rough winter for me and gloves--I've lost three already). I look at the clock and despite all this cardio I'm doing, there's still a sliver of hope of making the bus if I hustle, so I pressed on.

I overcompensated of course and ended up playing so fast that I eventually butted up against the two regulars I saw earlier, who were cart-riding and are generally known as some of the fastest players east of the Verrazano Bridge.

With four holes left I checked the time again--I had about thirty-five minutes. Doable. I sped along pretty nice, even managing a couple of gritty pars, until I got to 18 tee and saw that not a four, but a fivesome of Korean golf mafia had just teed off, having cut over from the 11th green. Jesus. For crying out loud. Again?

I could feel my insides starting to burn up. The rudeness of these... these people was hard to take on any day, but on this day they're about to blow up my entire bus-plan and right near the finish line. Pardon the language but fuck that! I devised a plan. As soon as the KGM's were out of sight, I hit a short tee shot with a 3-wood. I got to the ball; I had about 190 in. Soon as they were all on the green, I pulled a 6-iron figuring in this weather there's no way I can reach all the way. Sure enough the ball stopped safely short. I walked up near the green and prepared to chip. The group saw me and were surprised--"Oh! Where you come from?" No reply, I just sort of looked through them and continued sizing up my chip-shot. They actually hurried to finish. Hmm, maybe these people have some sense of right and wrong after all. Or maybe they were freaked out by the crazy man appearing out of nowhere with the faraway stare and ticking time-bomb vibe. Hey whatever works. I putted out and made it to the bus stop in time.

I managed an 86. Looking back there was some actual decent golf amidst all the huffing and puffing and sprinting and what not.

We are due for a relative heat wave in the next few days and if the rain/sleet/wintry mix allows for it I'll aim to get out there again. I've said it a hundred times before, probably say it a million times again--I'm really enjoying this golf thing. I don't want to blow anything out of proportion, but some really good swings were made in this round and I might have even made some progress towards understanding The Secret.
Posted by Legitimate Golf at 11:11 AM