Bow down to the crown

The LPGA debuted a new event over the weekend, the International Crown. For those who missed it, this was a team tournament with the US, Korea, Japan, Taiwan, Thailand, Sweden, Spain and Australia each fielding a team of their four highest-ranked players.

I wasn't particularly interested prior to the event, but it dammit if this didn't out to be some compelling TV golf. The big "2 Teams, 1 Cup" matches might be great in theory but in 2014 they might be a little too exclusionary, too 20th century, too old-world and bloodless to really fan any of the flames of rivalry, xenophobia, ugly pride and deep grudge-bearing that make inter-national team competitions in any sport so appealing.

If you are looking for a real meaty, golf-based rivalry in the 21st century, one that's genuinely rooted in the bad stuff--distrust, jealousy and possibly latent racism--look no further than the one that has developed between the female golfers of the U.S. and South Korea.

Back in the early 20th century, not long after the seeds of golf had taken root here, American golfers began to threaten the hegemony of the game's originators. If the Disney motion picture "The Greatest Game Ever Played" tells us anything, the British hadn't just dominated us in golf in those early years, they actually looked down their noses at us, as people for God's sake. But then Shia LeBeouf beat the fat guy, and the sullen guy, and a loud and clear message was sent to our oppressors--we are not your whipping boy anymore. A heated rivalry was born.

In modern times though, America has taken over as the golf establishment as well as the dominant force in competition and the U.K. has settled into comfortable also-ran status, the rivalry effectively buried a long time ago when Jack Nicklaus conceded that Ryder Cup putt to Tony Jacklin as if to say "Hey, we are all rich white guys, why are we fighting for?" But like Britain circa 1912, the U.S. now finds itself golf-threatened by some punky new upstarts. In this case a small, formerly war-torn nation with a population of about a sixth of ours has for whatever reason taken aim at our women golfers and for the past decade or so made a lasting mark on the game.

I won't get into the history of this rivalry except to point out that it has culminated in a string of unwelcome Korean victories in the one women's golf tournament that truly matters a.k.a. the US Women's Open a.k.a. our national championship, and one rather humiliating and hilarious snafu in which a one-time LPGA commissioner attempted to stem the tide of Korean success by proposing an English-speaking requirement for tour membership.

During the first three days of pool play the U.S. and Korea--the top two seeds--both struggled, leaving themselves to playoff for the lone wildcard spot in the finals. The format for the showdown would be cutthroat and unforgiving: sudden-death best ball. That meant that if the two best scores tied, the second balls would count. With the sun setting over Maryland, it was sure to be a quick and decisive tiebreaker.

It felt like a groundbreaking occasion, a barefaced duel between two rivals like we have never seen before in golf, with the losers having to literally go home early, heads hung in shame. The playoff began at the par-5 16th hole and both countries chose to field their only teams that won that day: Cristie Kerr and Lexi Thompson, and Inbee Park and So Yeon Ryu, all accomplished players. I was surprised to see the Koreans so visibly nervous on the tee, but perhaps their expressions spoke of the hugeness of the moment.

Sure enough it only took one hole. Both Koreans produced tidy clutch golf and made birdies, with Ryu making a gutsy play for the green in two followed by an elegant up and down, and Park laying up but hitting a steely wedge inside of ten feet. Park, probably one of the best putters on Planet Earth, lived up to her heroic rep and dripped in the nasty downhill slicer. The U.S. was sunk by Thompson's hands of stone and resulting failure to get up and down for birdie.

In the aftermath the reactions said a lot. The Koreans, both former U.S. Open winners, confessed that this was the most nervous they've ever been in competition. The Americans tried to minimize their shortcomings while also pointing fingers at the format of the tournament itself. A dejected Thompson and her teammates insisted that her play on the playoff hole was above reproach, while a red-faced Stacy Lewis warned reporters, "I don't know if you want to know what we think of the format right now." An indignant Cristie Kerr snorted "maybe they will look at tweaking some things in the future." "There's going to be changes, for sure," Paula Creamer agreed.

You might call this an ugly, sore loser's reaction but I was glad to hear it. Even if these comments might betray an unfortunate level of self-entitlement, as well as a lack of grace, they also show that the Americans were stung by the loss, and that they cared about doing well here. 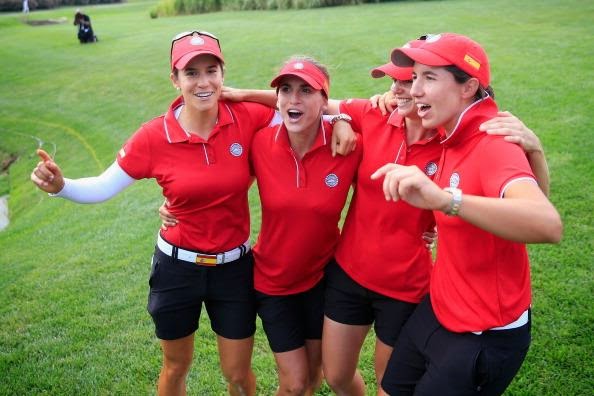 But in the end Spain outclassed everyone and it wasn't even close. While mediocre at best out on the dog-eat-dog tour, the underdogs made a huge advantage out of their shared bonds and childhood friendships and played with stereotypical Spanish golfing passion. Going forward, they are the clear favorites to retain the crown, regardless of seedings or rankings. That's good news for the tournament as this should create a running storyline and the makings of some new rivalries maybe.

You'll have to trust me, this was a kind of a crazy event all around. There was a squad of Thai players with unimaginable names like Pornanong and Sattayabonphot. There was a Japanese woman named Sakura Yokomine who freaked out the entire Western golf world with a back swing that went perpendicular to the ground. There was a player representing Sweden, Mikaela Parmlid, who is five months pregnant. That is fucking crazy when you really think about it. Most people have a hard enough time swinging a club effectively--without a partially-formed human living and swimming around in their gut. It's like facing two opponents in a sense. I am not kidding around here--if the powers that be were to decide that an unborn baby should also be credited for whatever wins or losses incurred by mama, I really would not think twice about it, I would be like "Well, that sounds fair to me."

So congratulations to LPGA on what I'd call a successful new addition to the tournament landscape--a big accomplishment considering how change and novelty are anathema to the staid status-quo world of professional golf. This event brought a fresh angle on golf competition and possibly an even more intense pressure on players to be patriotic and not disappoint millions of people back home. In the big Cup matches players can feel shielded and protected by mob-mentality, but on a four-man team there is seemingly no place to hide. Strengths and weaknesses are laid bare. And props to the players. The pressure on all was very evident and with the exception of Australia, and let's face it, Paula Creamer, most of them rose to the occasion, and no one had a nervous breakdown.
Posted by Legitimate Golf at 10:48 AM